On the Market: Contemporary Traditional Rowhouse in Fitler Square

Yes, you read that right: This rowhouse has very traditional bones, but a bunch of architecture students hung contemporary dress on those bones in the 1970s. 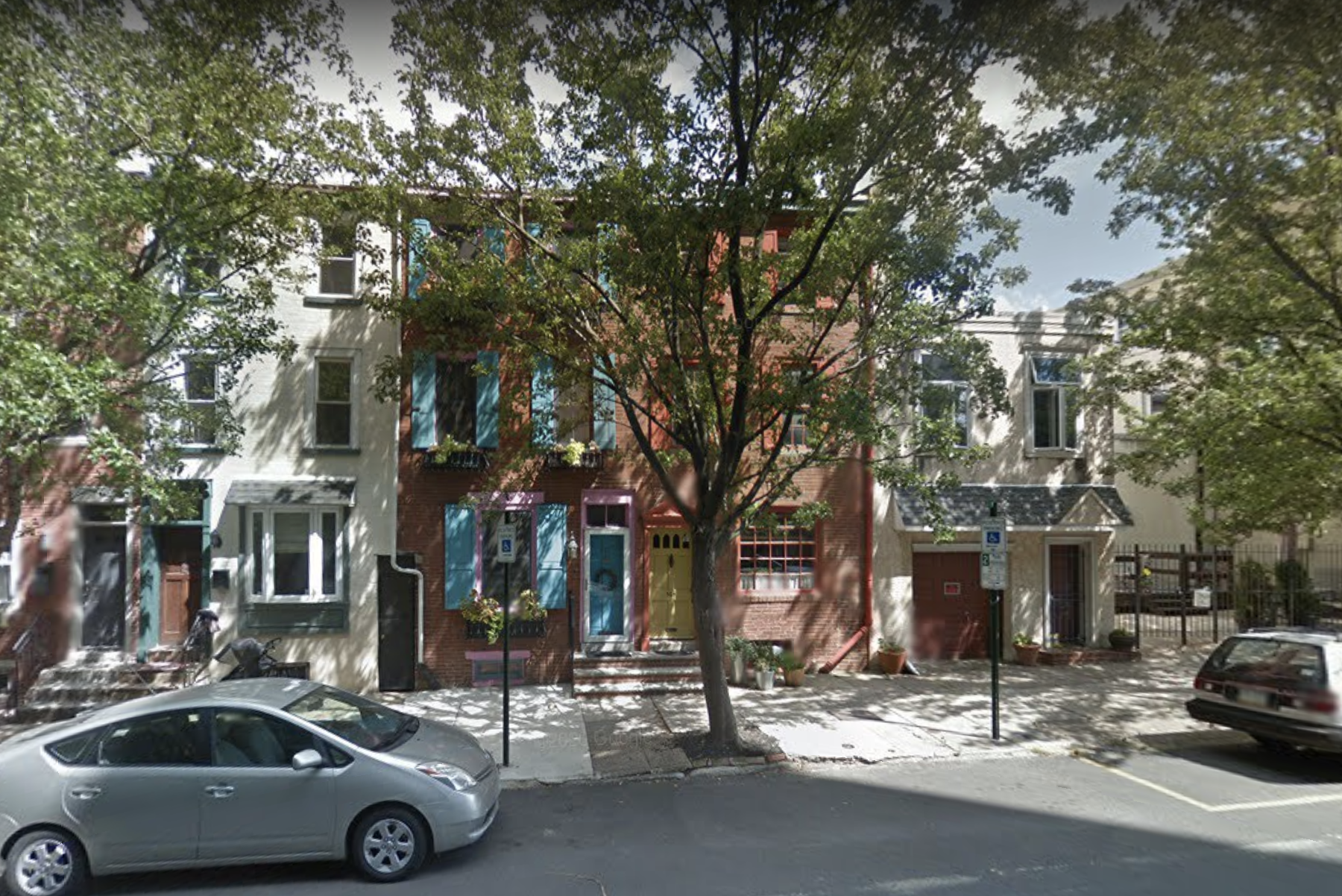 The shade tree you see in the photo above covers a very attractive rowhouse for sale at 529 S. 27th St., Philadelphia, PA 19146. Was it built in 1920? Of course not. But depending on what you pay attention to, you could say that it was built in either 1875 or 1975. / This photo: Google Street View image; all others: Bright MLS images via Space & Company

As those of you who pore over real estate listings know, the year 1920 often appears as a placeholder construction date for houses probably built well before that year. The trouble is, accurate written records are unavailable for many older properties, so when the records were computerized, the data-entry people just tossed that number in.

And so it is with this Fitler Square contemporary traditional house for sale. Elements in this house betray a birthdate well before 192o both by their appearance and their nature. Yet others indicate that his house has also been altered to reflect changing tastes — and that some of those alterations make it appear a good bit younger than 102 years old. For this we have some architecture students who got hold of this house in 1972 and did a fix-and-flip to thank.

For starters, the front door and large multi-light window next to it are clearly not original. Windows like this one are generally a mid-century addition to an older house.

Step through the front door and you should notice the built-in large bookcase and arched display coves in the living and dining room. Items that look like these do are more common in houses built before 1920 than in those built afterwards.

On the other hand, the metal stringers that accent the staircase to the second floor are another mid-century design choice — this time, a modern rather than a Colonial one. Ditto the light fixture in the dining room. 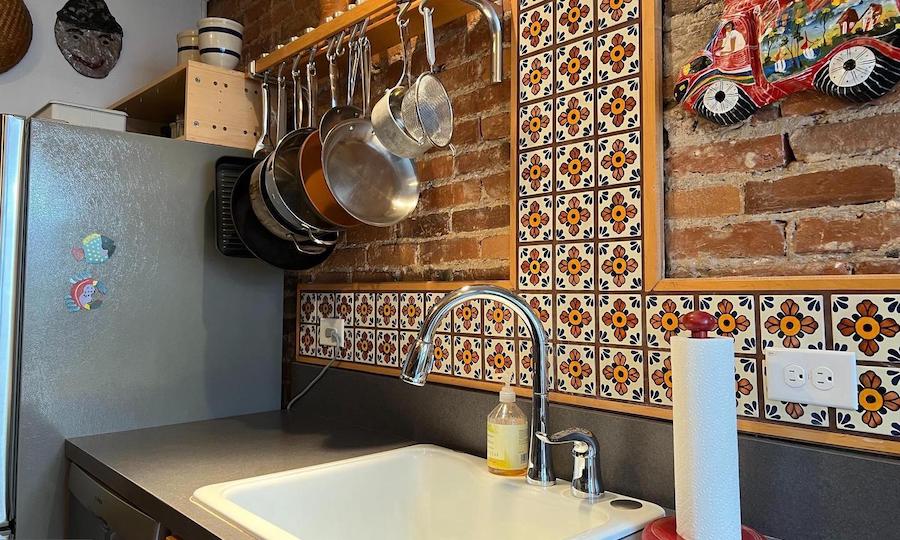 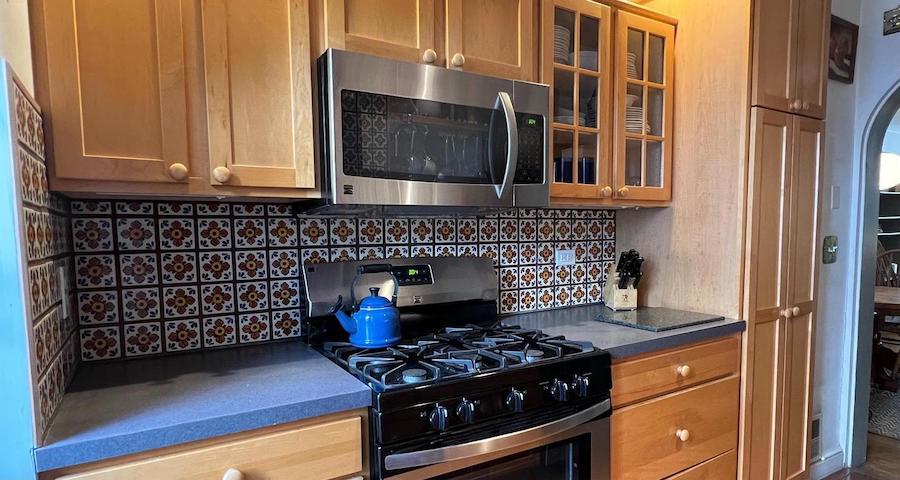 And while the imported Spanish tile backsplashes in the kitchen are of a traditional design, they are also set in an environment that features exposed brick and Shaker-style cabinetry that complements the dining-room furniture. Shaker design may have originated in the 19th century, but its simplicity makes it a popular choice for contemporary environments as well. 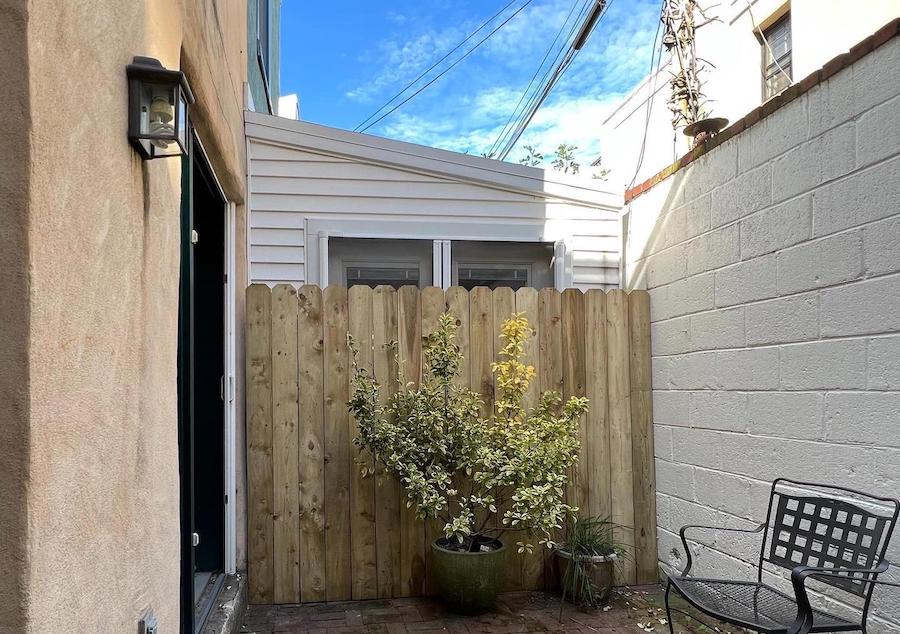 The arched doorways leading to the galley kitchen and the L-shaped rear patio also reflect this house’s pre-20th-century heritage. But it is also worth noting the absence of such elements as crown moldings and chair rails. Those would have given this house a much more traditional look. 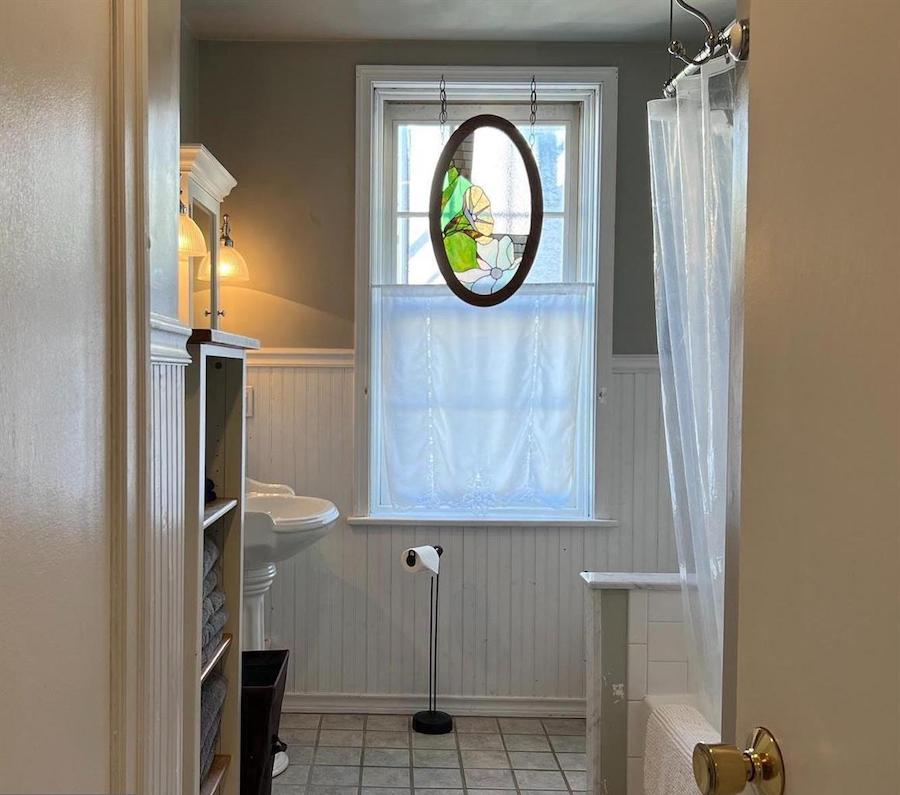 The simple upstairs bedrooms also lend themselves well to contemporary style, However, the full bathroom on the second floor, though clearly updated since the 1970s, is definitely old-school with its batten-board wainscoting, traditional medicine cabinet and lighting. 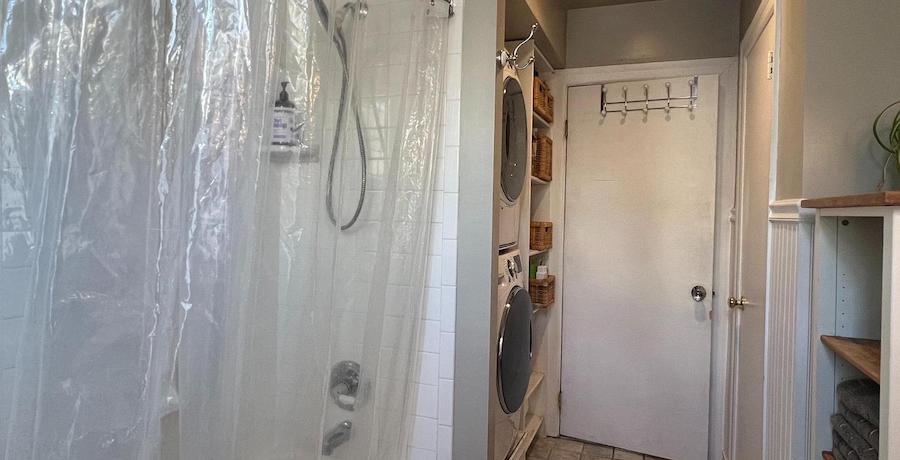 The updating, however, also gave it room to accommodate a stacked washer and dryer along with open linen storage and a closet. 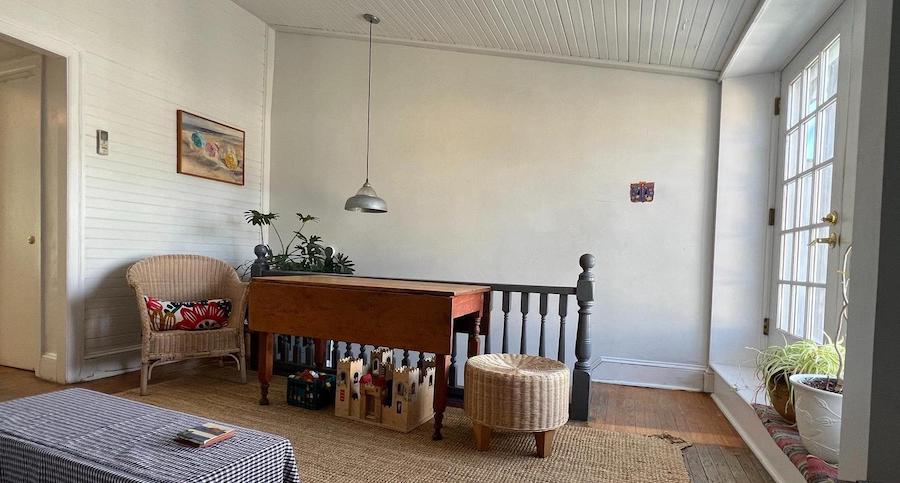 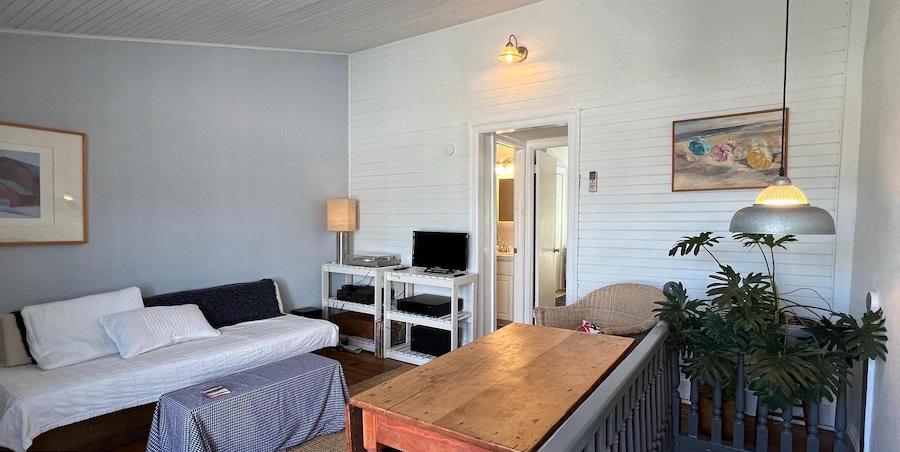 Finally, past and present play nice with each other on the top floor. The batten-board ceiling and turned banister come from the past while the light in the top-floor family room comes from the present. The large French doors open onto the roof of the rear ell, which begs to become an actual roof deck. 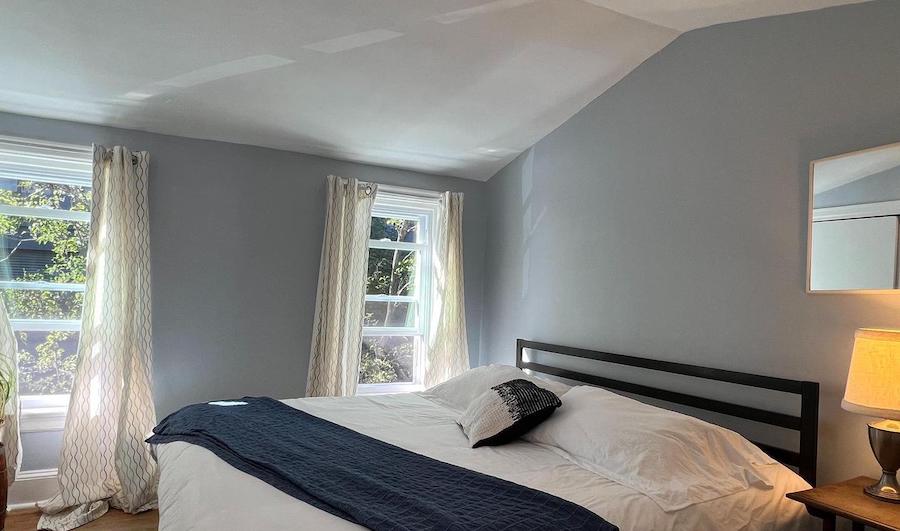 The primary bedroom on the other side of the (more traditional) bathroom is once again simple and unadorned.

And, of course, all the kitchen appliances and bathroom fixtures are completely up to date, whether they look like today or yesterday.

This attractive mix of past and present sits near Schuylkill River Park and the South Street bridge over the river, making it ideal for anyone who works at Penn but doesn’t want to drive to work. The park itself also offers plenty of opportunities to work some exercise in.

Add that to the house’s channeling of both the 1870s and the 1970s and this Fitler Square contemporary traditional house for sale should please both your nostalgic sentiments and your modern sensibility.

OTHER STUFF: This house’s owner, a licensed Pennsylvania real estate agent who grew up in it, no longer lives there and has been renting it as an Airbnb. She says that changes in city rules governing short-term rentals have led her to sell now.  But since the house is currently still listed as available on Airbnb, showings can only take place on days when it is unoccupied.