A top-to-bottom rebuild has given this trinity an industrial-chic look. 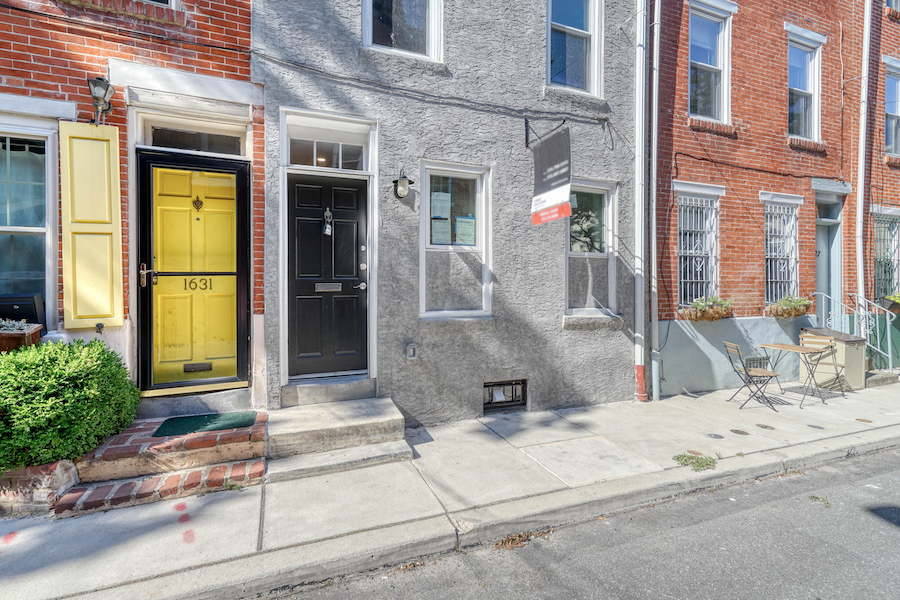 Don’t let the stucco facade deter you from checking out this renovated trinity at 1629 Rodman St., Philadelphia, PA 19146, for on the inside, it looks really sharp. And the stucco can even be forgiven; repointing the brick would have added to the cost of the renovation, perhaps enough to make it unaffordable to many. | Photos: Stacy Rodman via Keller Williams Philly

There are many streets in Rittenhouse Square on which one can find trinities. Even nice ones.

But it seems that a lot of the nicest trinities in Rittenhouse Square are on Rodman Street.

The block of Rodman Street on which this Rittenhouse Square renovated trinity house for sale sits is a distant runner-up to the nearby 1700 block of Addison Street, one block north, as the most charming little street in Rittenhouse Square. Planting some trees on it would help it enter the big leagues. But the makeover this trinity got definitely adds to its classiness.

The makeover covered its brick exterior in stucco, which I wish the renovator could have avoided. But everything else about this makeover turned this trinity into a real industrial-chic looker. 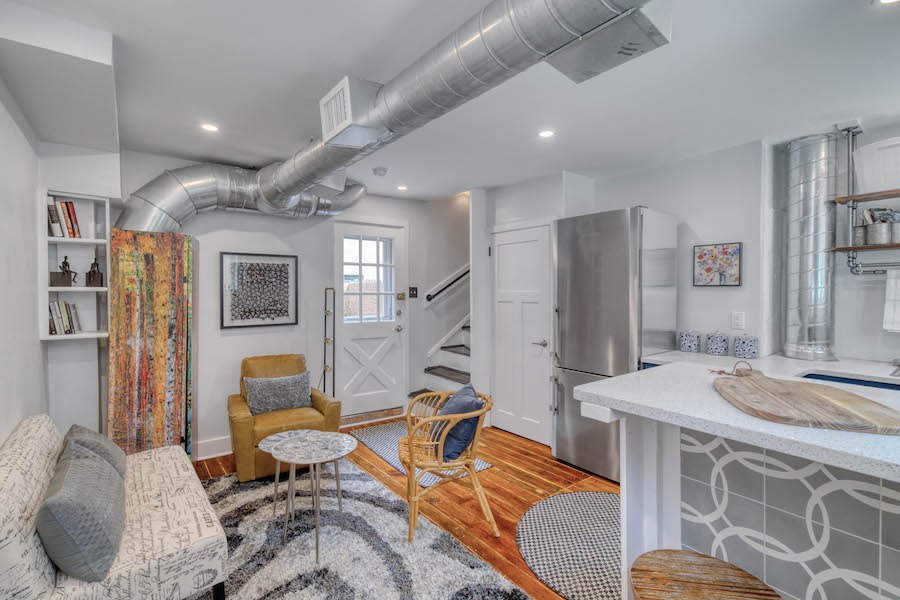 Starting with the main floor, you should immediately notice two of the chief elements that make this house’s design distinctive: exposed ductwork and reclaimed wood. 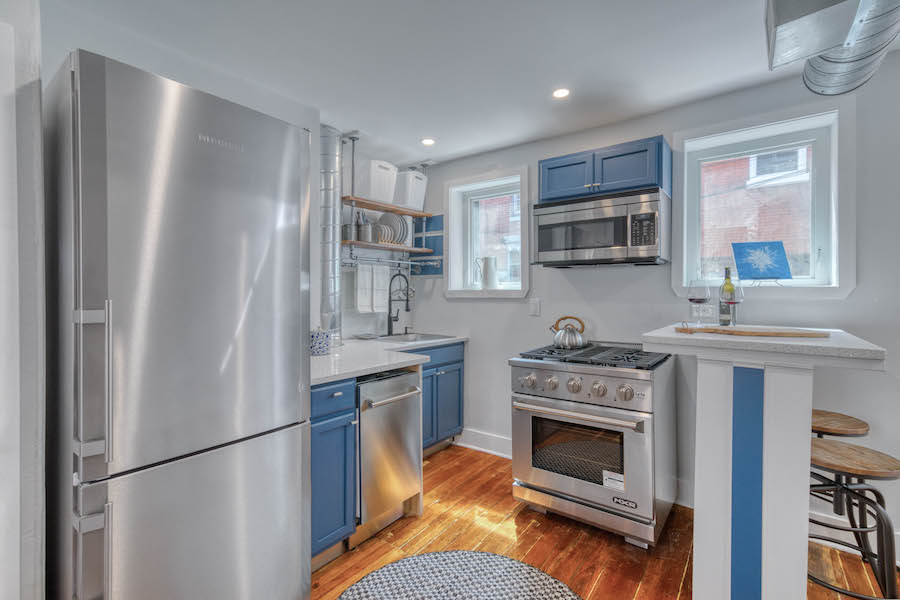 Not on the floors, which are the original hardwood floors, refinished to a high gloss. Instead, note the open shelves suspended from pipe in its kitchen. And while you’re at it, note the quality of both its cabinetry and its appliances.

(I’m not sure whether the boards surrounding the main duct from the climate-control unit in the basement are reclaimed wood or something else, but they sure add color to the room.) 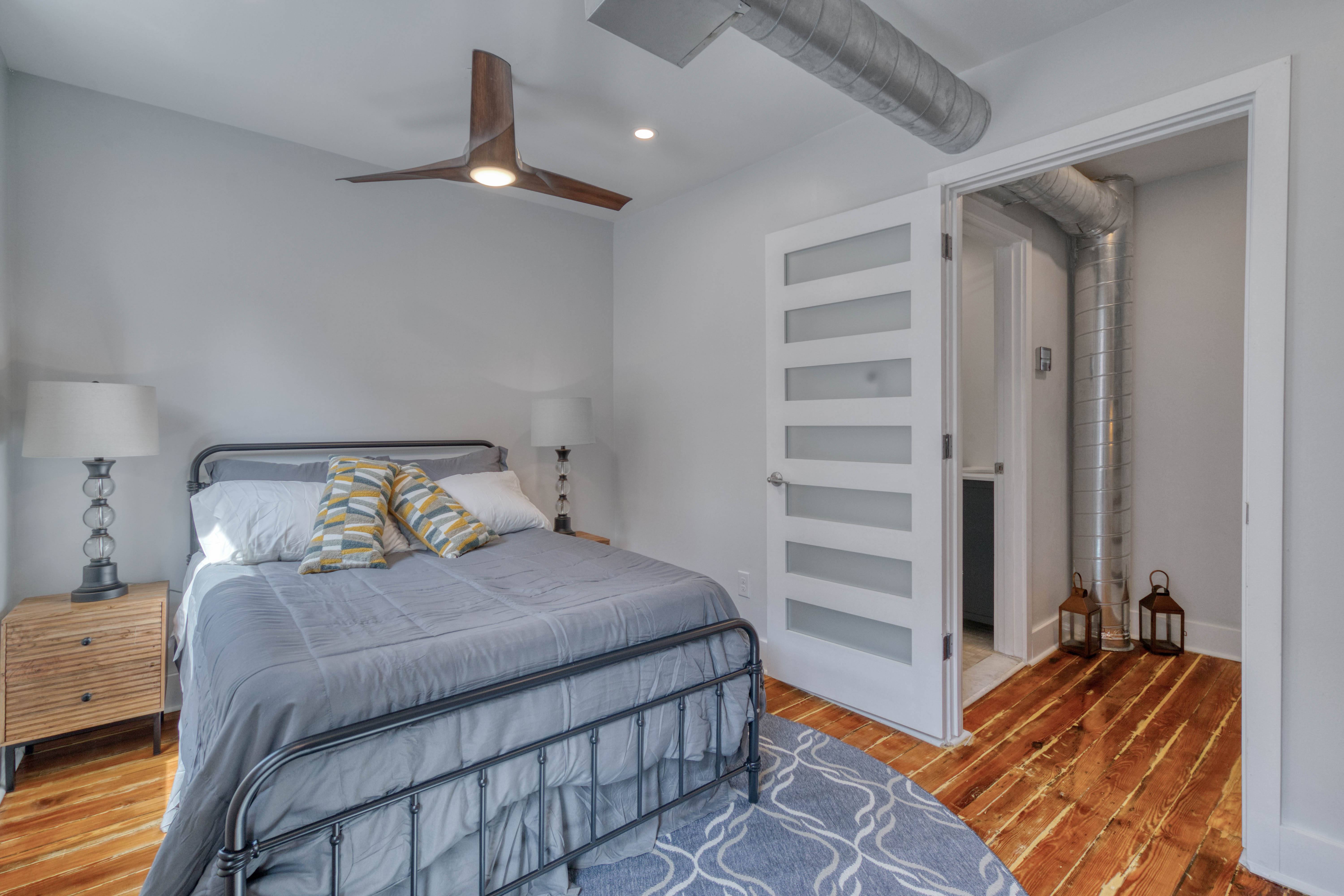 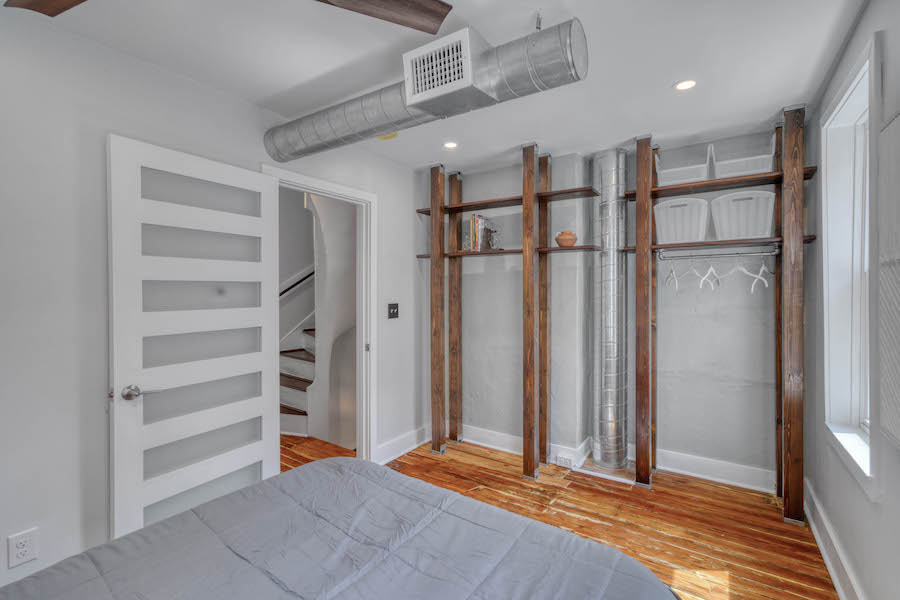 The two bedrooms have shelving units and hanger bars in place of closets, making them feel a little less claustrophobic and look a lot more distinctive than most trinity bedrooms. 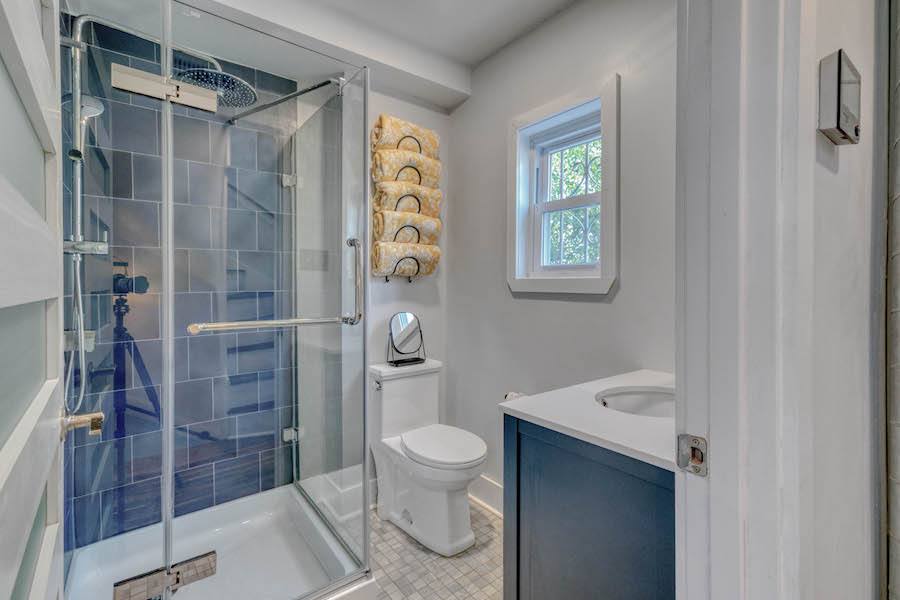 The second floor also has the house’s one full bathroom. The makeover gave it a very nice glass-framed shower stall. 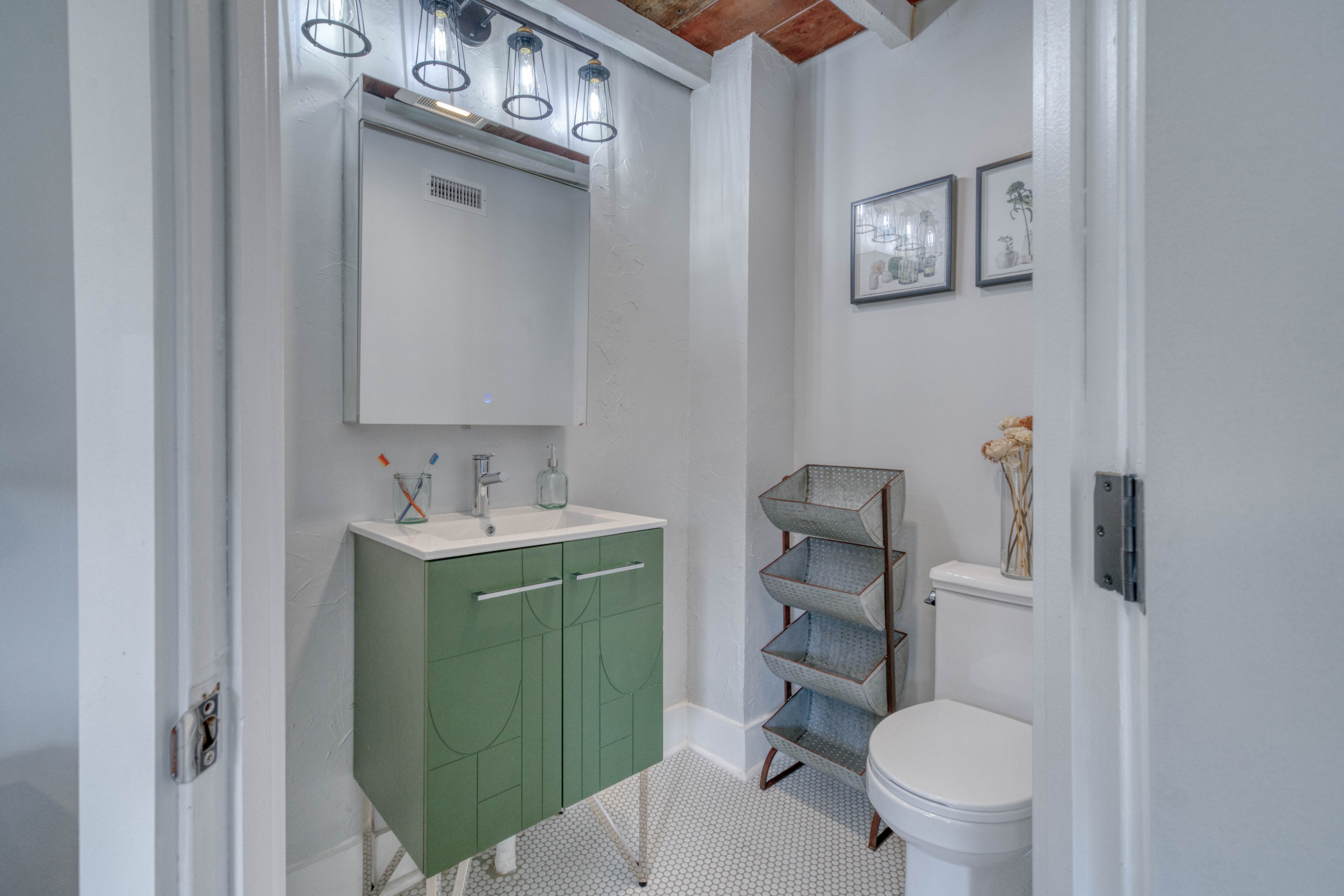 If you use the top floor as the primary bedroom, you will only need to shower downstairs, though. That’s because a powder room got added upstairs. 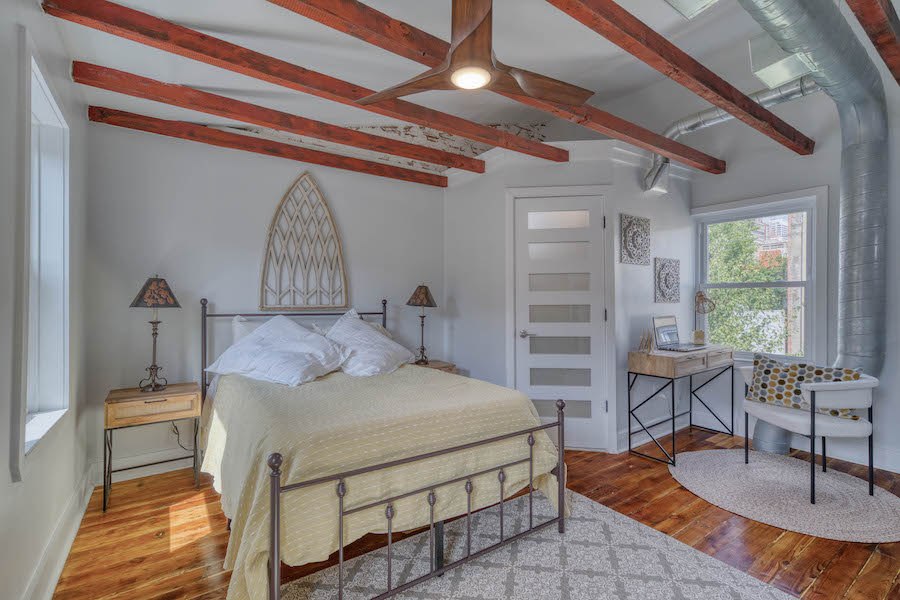 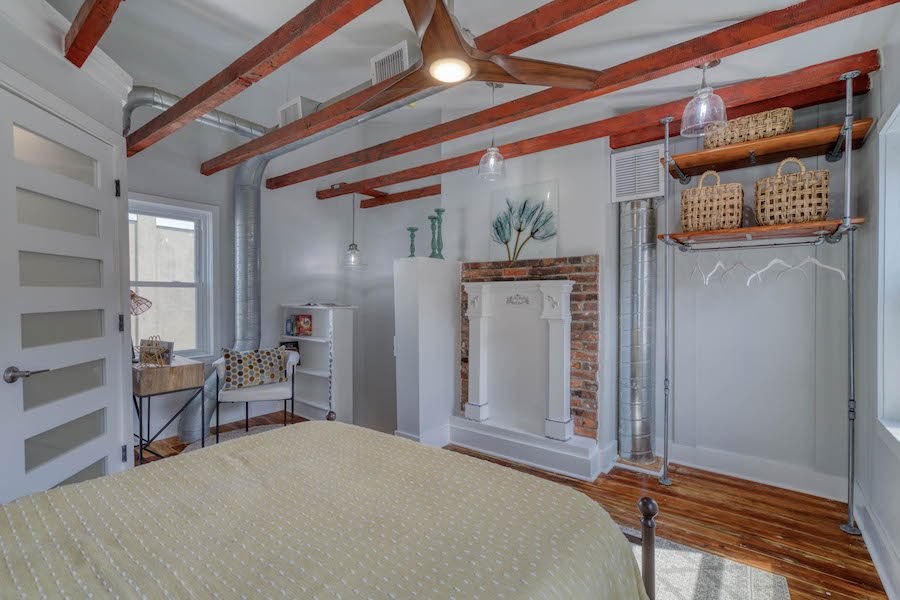 That also created a study/home office alcove in the bedroom itself. Its beamed vaulted ceiling enhances its look, as does its Haiku ceiling fan. 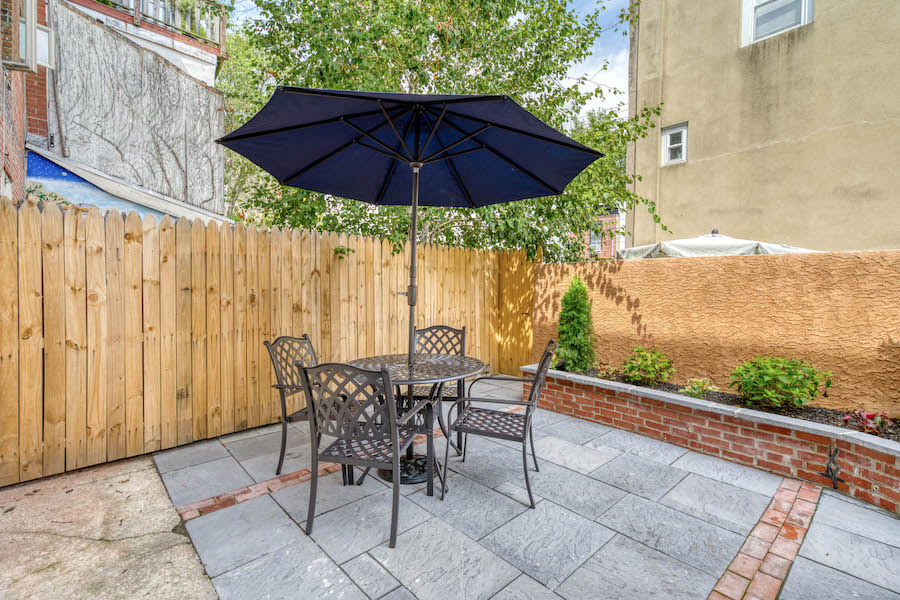 Back downstairs, you’ll find a spacious rear patio with attractive planters. It has room enough for a grill and dining table for outdoor dining and entertaining.

Would you be willing to sacrifice outside charm for inner beauty? I know I would.