There’s no doubt about this trinity’s historic pedigree. A 2009 renovation brought it into the present. 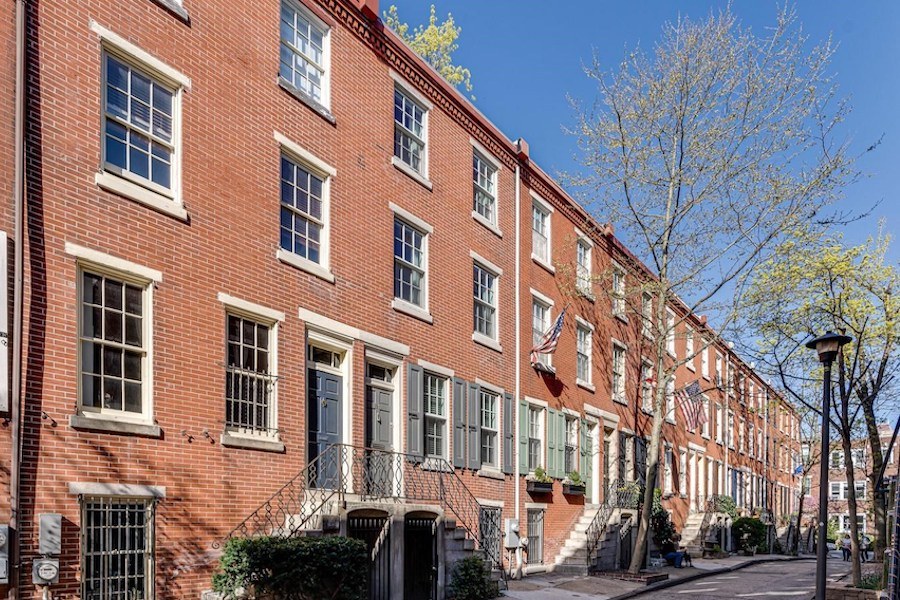 The elevated main floors of the Ringgold Place trinities give them a slightly more Southern look than most Philadelphia rowhouses. One of these historic gems just went on the market: 1921 Waverly Street (left), Philadelphia, PA 19146 | Bright MLS images via BHHS Fox & Roach Realtors

You now have what may be a once-in-a-lifetime opportunity to own a house on one of the city’s best-known historic blocks: the 1900 block of Waverly Street in Rittenhouse Square.

This block of 26 trinities built during the Civil War is better known by its pre-rationalization street name: Ringgold Place. The Wikipedia article on the block states that the houses’ scale and spartan appearance reflect “the material shortages during the American Civil War.” For almost a decade, from the mid-1920s to the mid-1930s, noted local architect George Howe owned the entire block. He maintained an office at 1900 Waverly Street, and during his ownership, he modernized the houses and added some decorative elements to the rows’ 19th Street facades.

The block containing this Ringgold Place trinity house for sale was added to the National Register of Historic Places in 1983, and there is no doubt that every house on it is a contributing property.

But that doesn’t mean their interiors remain stuck in the past. This house got a total makeover in 2009 that respected its traditional simplicity while bringing it into the here and now.

Two things that distinguish the Ringgold Place houses from most other trinities and rowhouses in the city are their elevated main floors and partly-above-ground basements. That means that each of these houses has two front entrances. 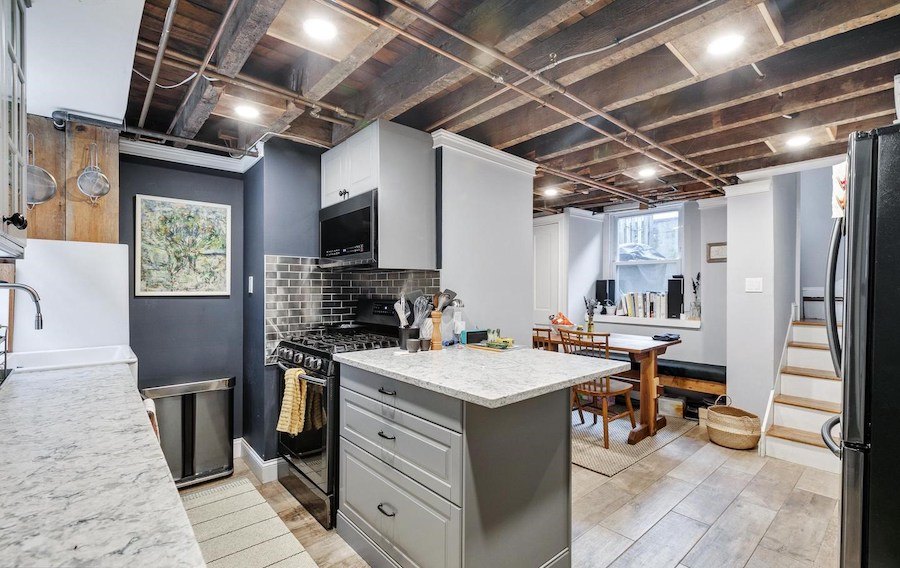 The lower one leads to the kitchen and dining room. The slightly larger floorplates of these houses create alcoves on each floor next to the trademark staircase. The alcove in the totally up-to-date kitchen is large enough to accommodate a dining table for four, and the kitchen itself has a peninsula that could accommodate one more seat. This means that you can actually entertain guests here. A half bath on the kitchen level accommodates their toilet needs. 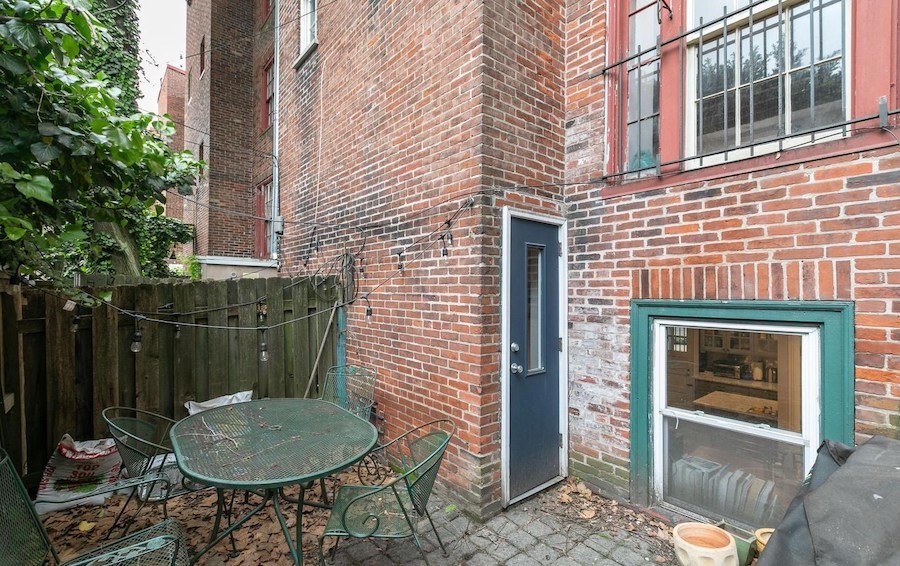 When the weather permits, you could even host indoor/outdoor dinner parties using the rear patio, located a few steps up from the kitchen. 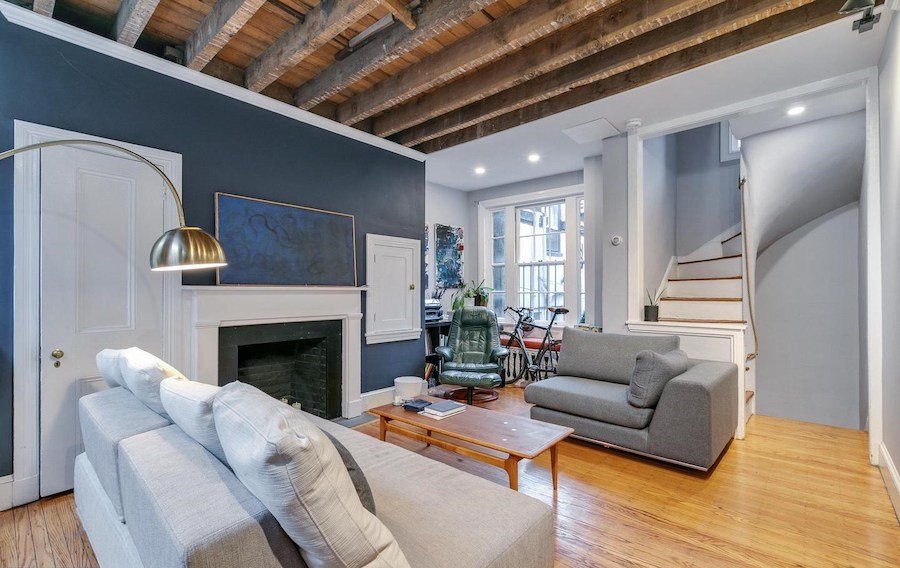 At the top of the spiral staircase from the kitchen is the main floor, which also has an entrance from the street. The makeover left the original ceiling beams exposed on every floor of this house, save the second. The exposed beams give the rooms extra character.

The alcove off the living room currently serves as a home office space. 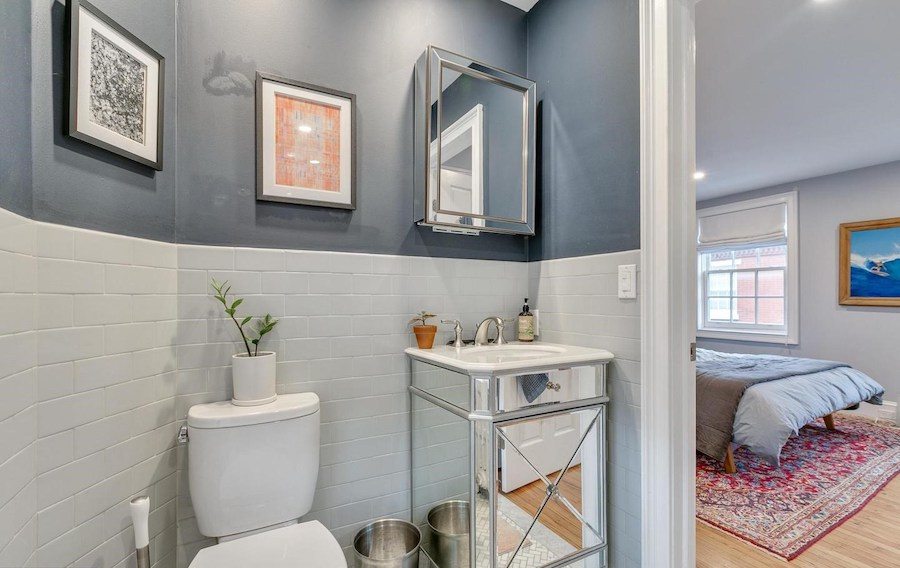 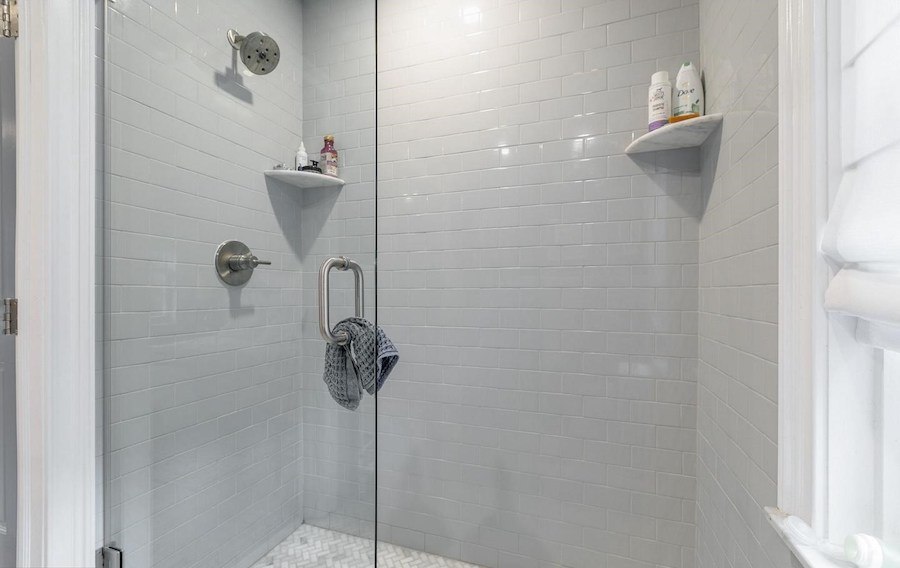 On the second and third floors, the alcove contains a full bath, making both bedrooms en-suite. The bathrooms are identically configured and differ only in the color of the subway tile walls and shower enclosure and the style of the vanities. 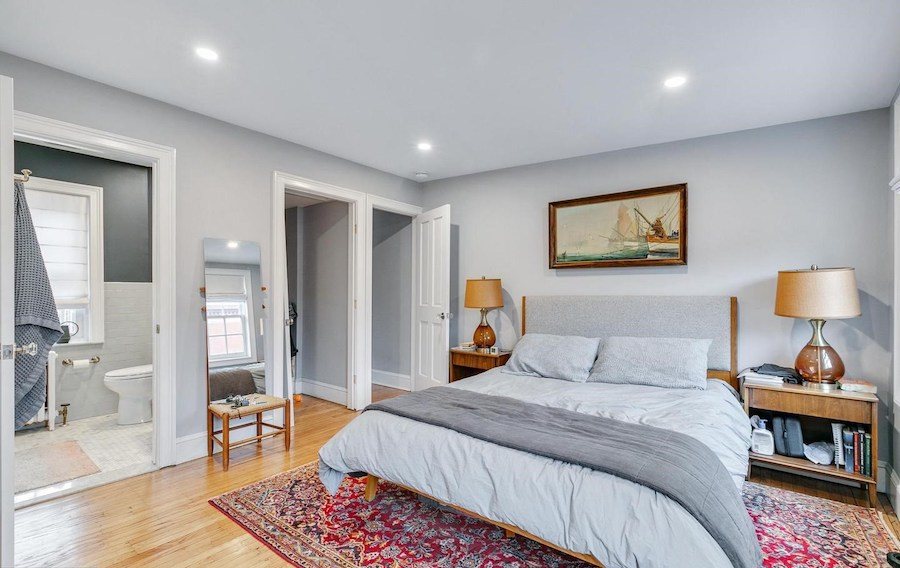 The second-floor bedroom serves as a bedroom now. 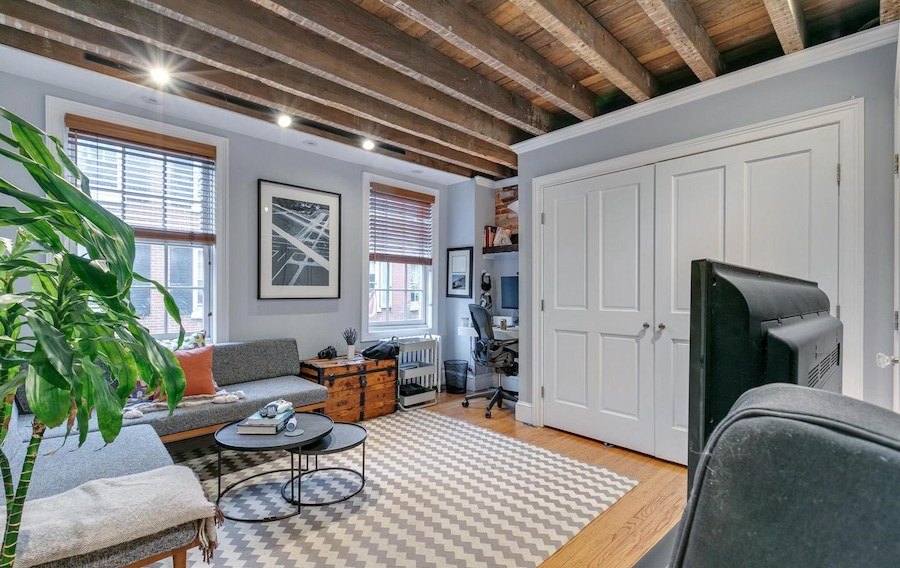 The one on the third floor currently functions as a den and media room. (Clearly, this house’s owner enjoys entertaining.) And it, too, has a workspace.

Even though this Ringgold Place trinity house for sale is currently designed for entertaining at home, I‘m sure you will want to get out every so often. Fortunately, you’ll find plenty of places to go and things to do within walking distance. These include Rittenhouse Square itself, the shops of Rittenhouse Row, the South Street West restaurant row, and the Avenue of the Arts.

Given its location and pedigree, it should come as no surprise that this is one of the priciest trinities to come on the market of late. But given its location, its pedigree and the quality of its makeover, I’m also sure that someone out there will consider it worth every penny — and snap it up soon.