Some of the people who have called this place home since 1881 have fond memories of it. Now you have a chance to make your own. 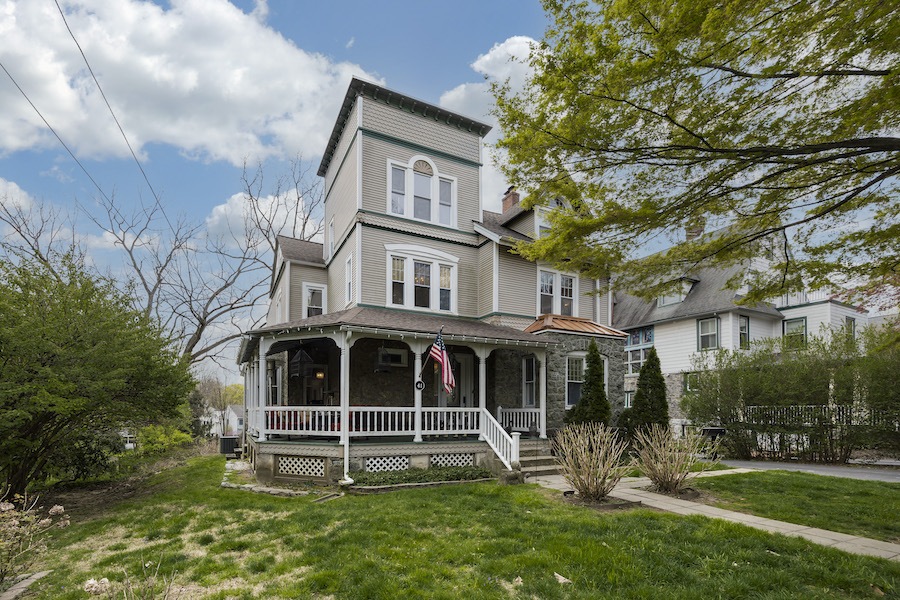 It should be abundantly clear that this dignified Queen Anne house at 41 Rosemont Ave., Bryn Mawr, PA 19010, has had love galore showered on it in the 131 years since Samuel Wakeling first crossed its threshold. Its current owners hope you will love it as much as they do, too. | Photos: August Haeuser via Coldwell Banker Realty

This handsome Bryn Mawr Queen Anne house for sale has had numerous stewards since Samuel Wakeling built it in 1881.

Its second steward was a gentleman named William Forstall, who bought this house sometime around 1908. Each of his two children recalled their formative years in the house fondly and reached out to later owners to express their desire to visit their childhood home.

His son Walton Forstall wrote then-owner A. Balfour Smith a letter in 1984, recounting his birth in 41 Rosemont Avenue in 1909 and his frequent trips back from Pittsburgh, where he taught at Carnegie Mellon University, to Wynnewood to see his sister Anne, who lived there and was also born in the house. Recalling memories of his youth, he asked Smith whether he and Anne might stop by and see the house on his next trip back.

Then, on July 15, 1988, Anne herself wrote then-owners “Manis and Chris” — neither I nor the agent marketing this house can say for sure, but “Chris” might have been Christian Huber, who owned this house up through 2016 — to express her gratitude for the support they showed her after she learned of her brother’s death that morning. She too still had a strong attachment to the house, which, judging from how she ended her letter, they had just bought: “You have one darling child,” she concluded, “and I am positive the house will be perfect.”

The house turned out to be perfect for current owners Christopher and Valerie Twomey as well. Not only did they preserve these ties to their home’s past, they preserved all of its elegant details and features while bringing it into the here and now. 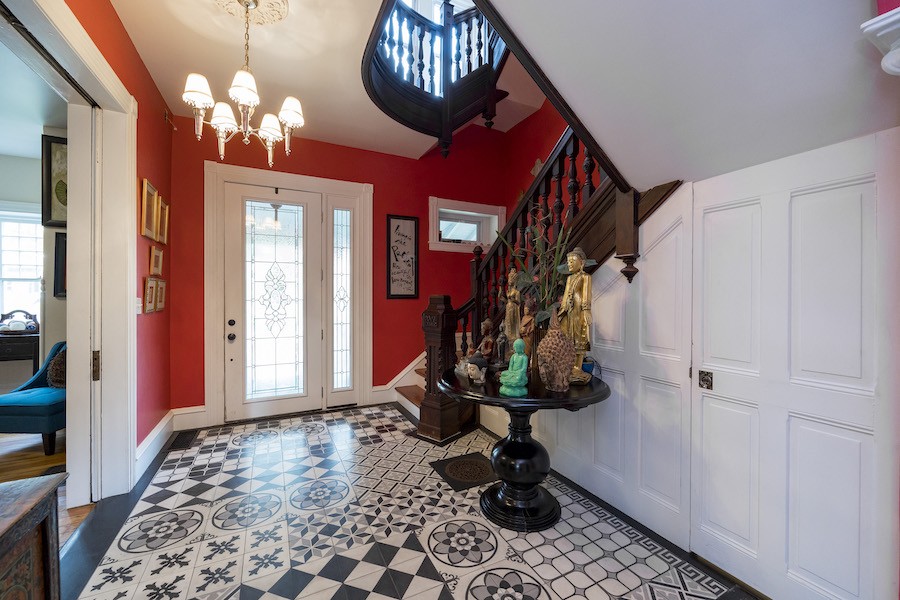 Their careful stewardship of this house should be evident the moment you pass from its welcoming front porch into its foyer. Both the exuberant imported tile floor with its multiple patterns and the substantial black walnut staircase have been meticulously maintained. (The door under the stairs leads to a powder room.) 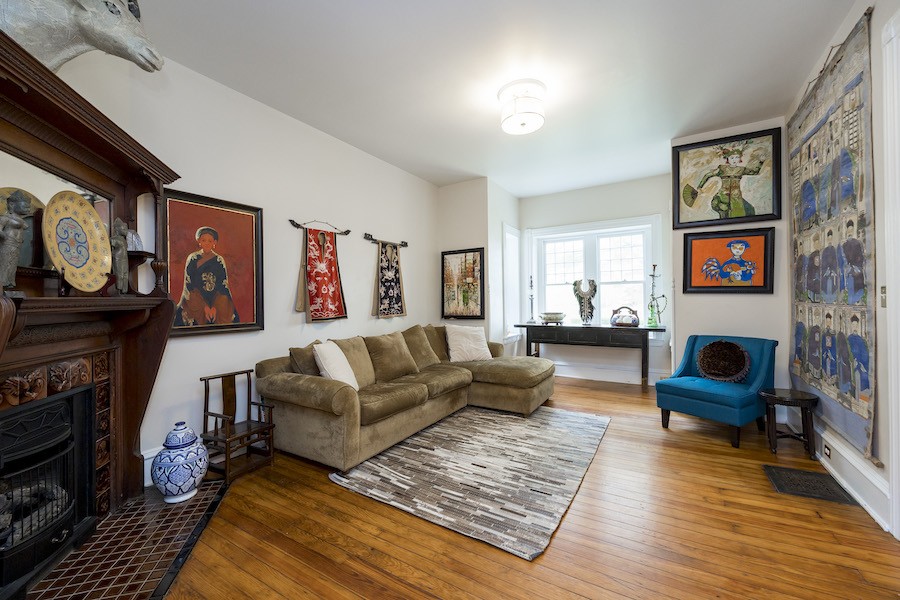 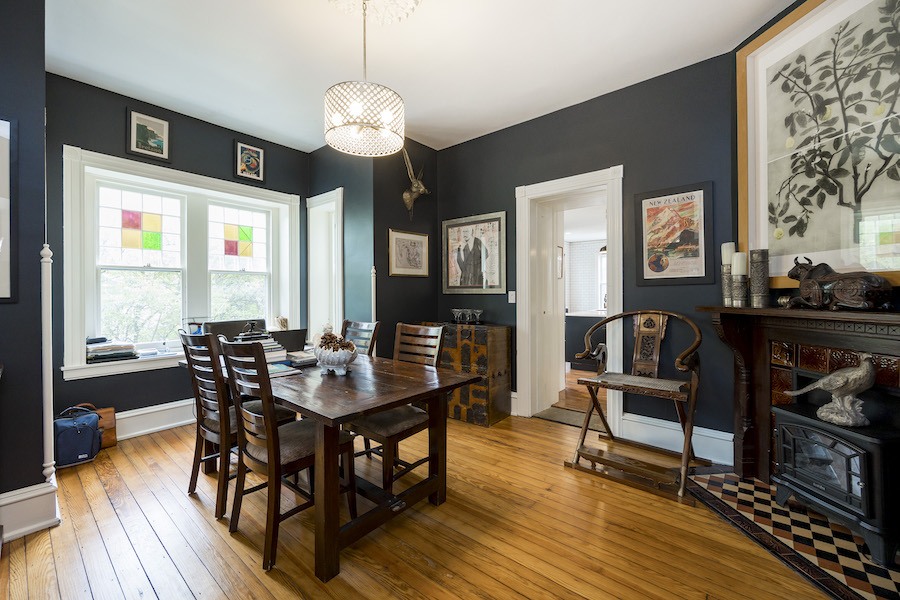 So have the formal living and dining rooms off the foyer. 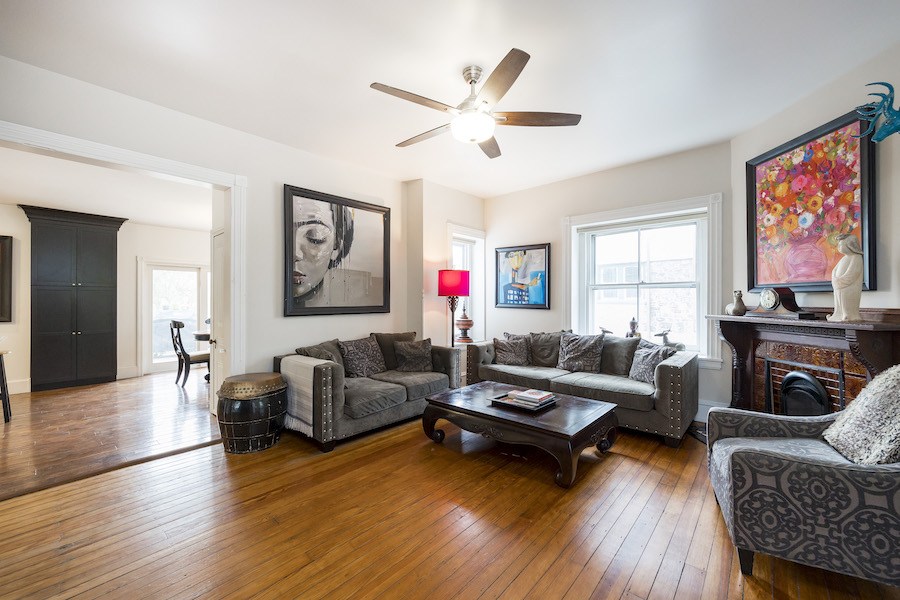 Both of these rooms and the great room between them and the kitchen boast original hardwood floors and elaborately decorated fireplaces with gas-stove inserts. 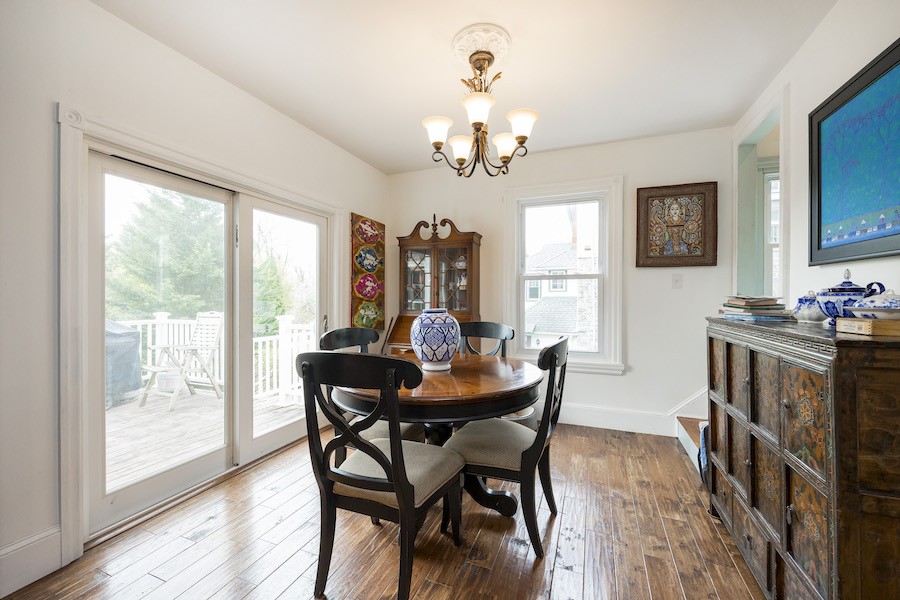 The kitchen, which is one with the breakfast room, received a $170,000 makeover recently. 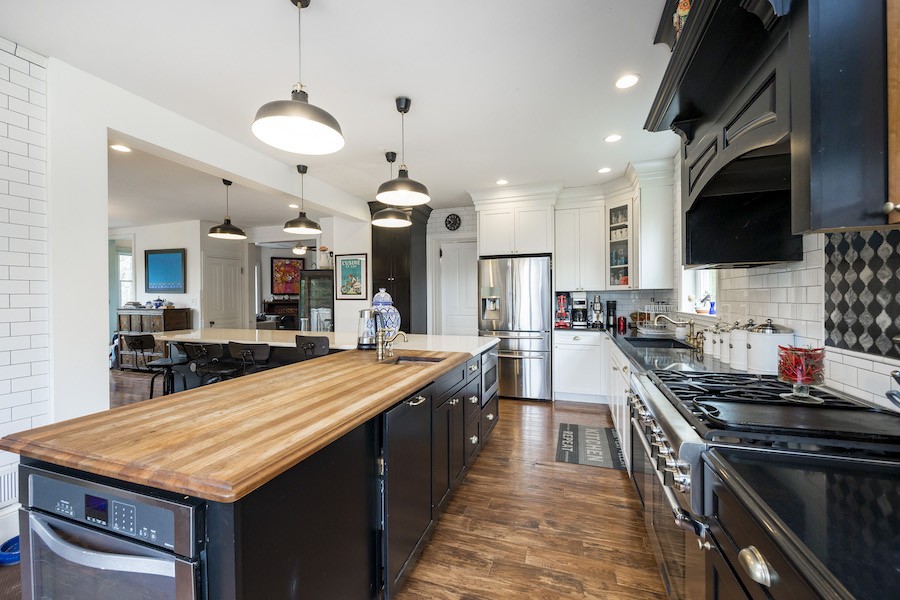 That makeover gave it a huge L-shaped island with a partial butcher-block countertop, a professional-quality range with a griddle, a microwave and a warming oven. Note also how well the range hood matches the color and solidity of the staircase banister. This kitchen is not only dressed to impress but also outfitted so that you can prepare a large feast for guests. 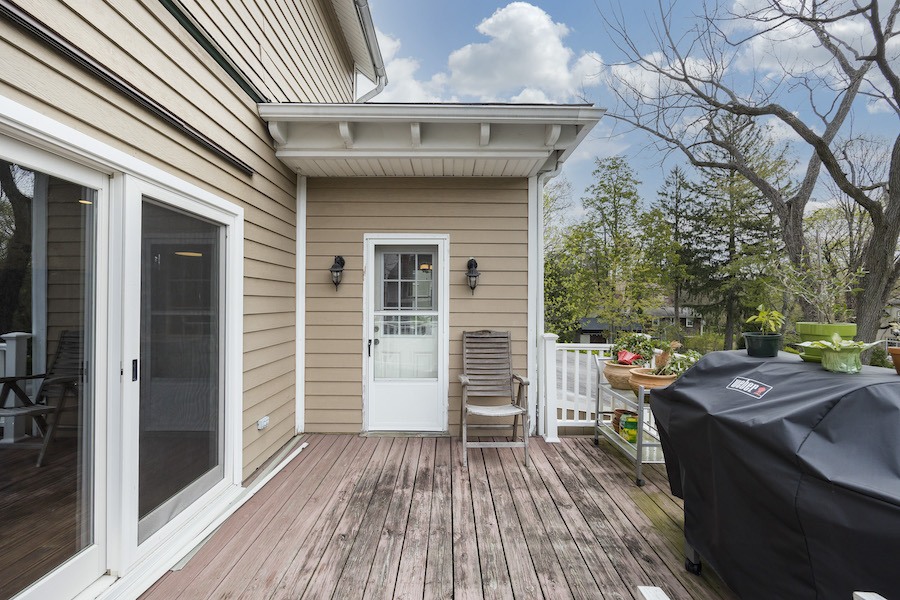 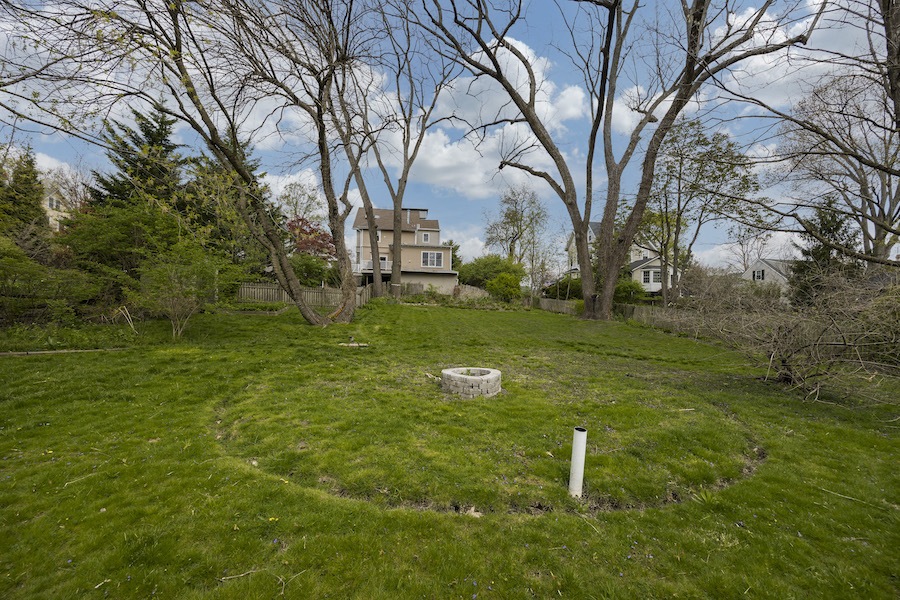 And the kitchen and breakfast room wrap around a large rear deck that looks out on an equally large backyard. 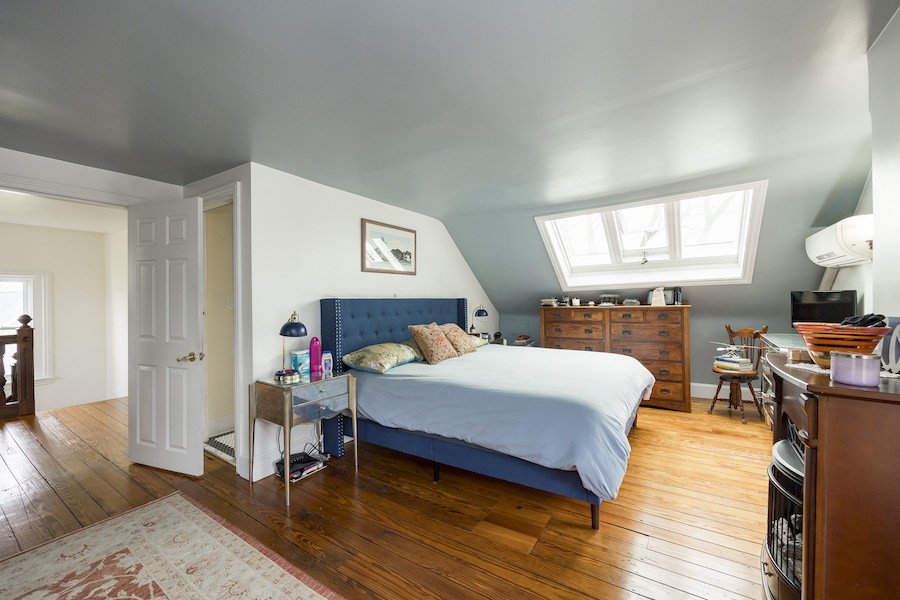 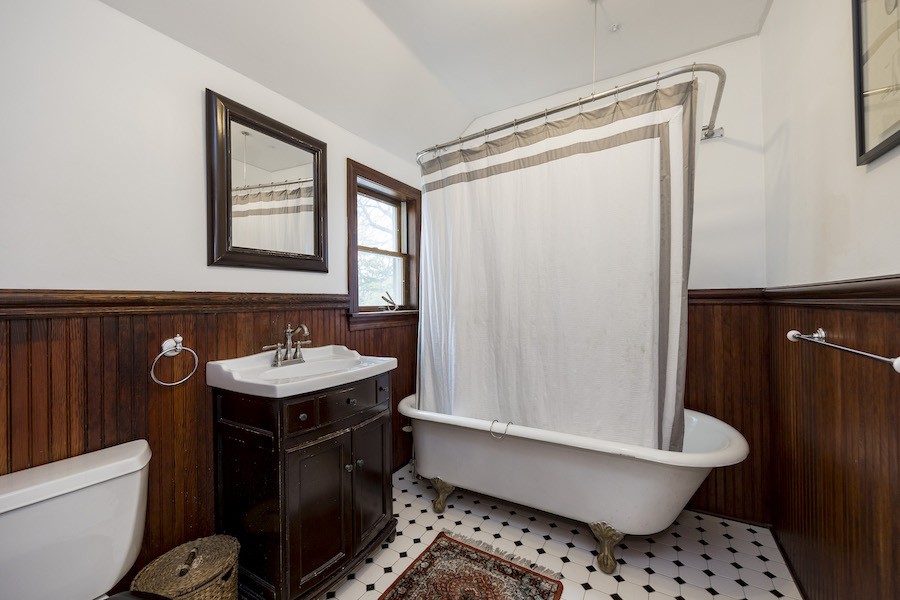 Each of the three full bathrooms has its own distinct personality. The second-floor hall bath, for instance, contains a vintage clawfoot tub. 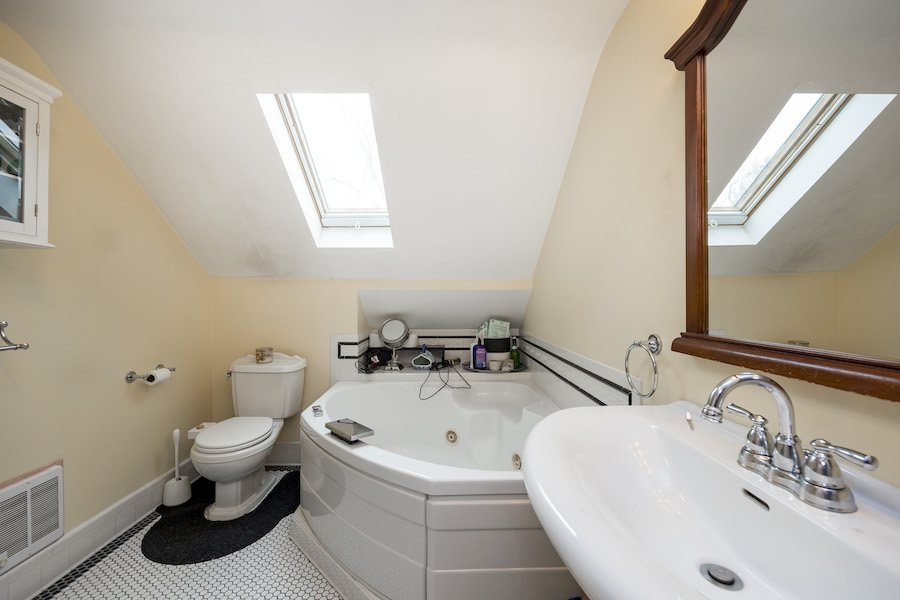 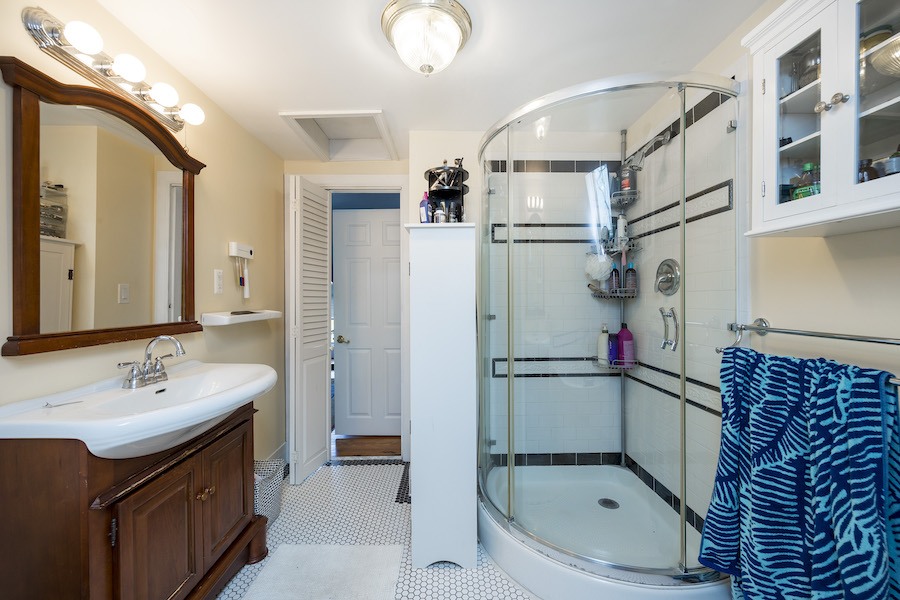 The other two bathrooms are more modern. The skylit primary bathroom has a jetted soaking tub and a striking glass-enclosed shower.

Other original details that have been lovingly preserved include its stained-glass windows, pocket doors and etched-glass front door.

You will enjoy tranquility living here, as the house is close to the center of Rosemont, which has very little in the way of commercial activity. And because this Bryn Mawr Queen Anne house for sale is a short walk from Rosemont Regional Rail station, you will also enjoy a quick commute to Center City Philadelphia if and when you feel like heading there. When you don’t, however, both Bryn Mawr and Ardmore just down the line have many good places to shop, dine and hang out.

So: What fond memories would you like to make here? Make an offer and you just might get a chance to make them.

OTHER STUFF: This house also has garage parking for two cars. It also has an offer pending, but the seller is accepting backup offers.