This house has been renovated and updated recently, but in a way that respects its historic character and charm. 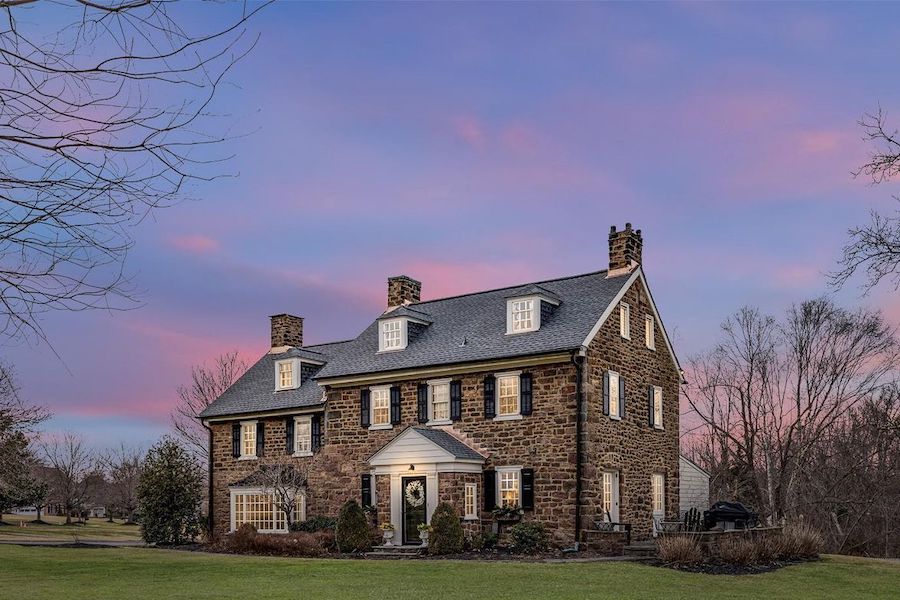 You can find vintage-1900 Colonial Revival houses all over our region. This is not one of them. Instead, you’re looking at a genuine Early American farmhouse dating to the beginning of the 19th century. And recent renovations to 805 Nesbitt Rd., Ambler, PA 19002 have respected its history. | Photos: Powelton Digital Media Group via Bright MLS and Compass

I’ve remarked before on property data sheets that give 1920 as the construction date of houses clearly built either before or after that year.

That’s not the date on the sheet for this Maple Glen Colonial farmhouse for sale. But in this case, the date given — 1900 — represents an even bigger error. 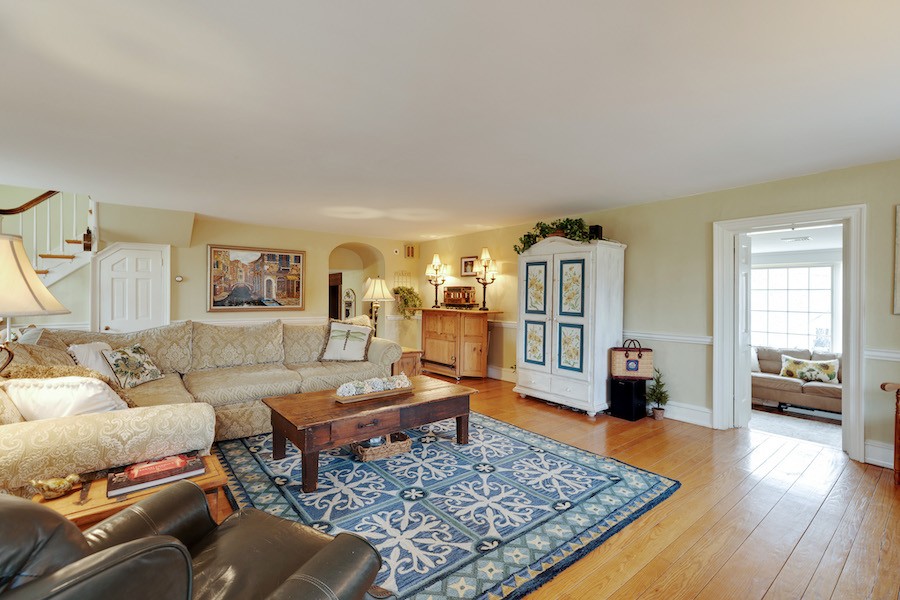 That much should be evident as you peruse the photos of its living room and dining room. 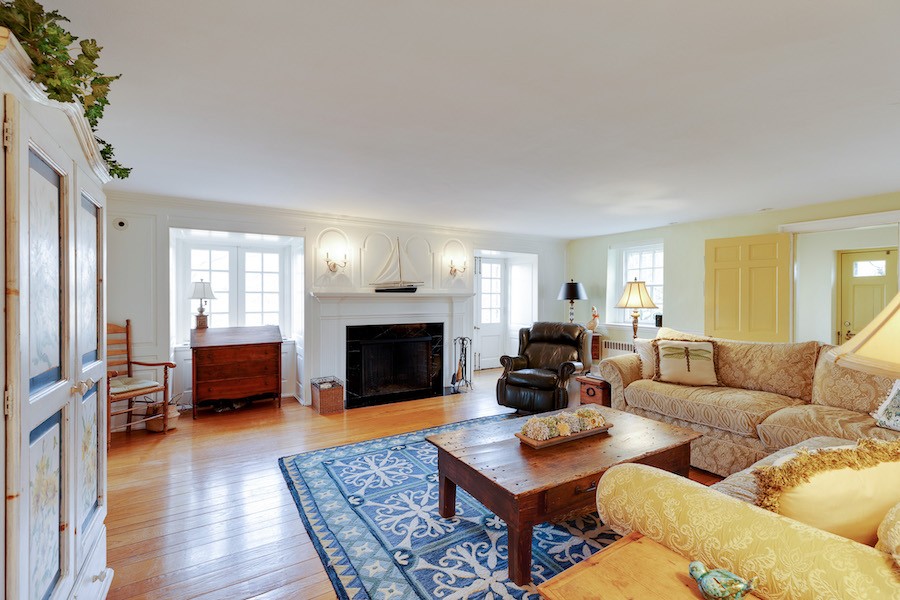 Note the deep window wells in the living room, for starters. A vintage-1900 Colonial would have much shallower ones. 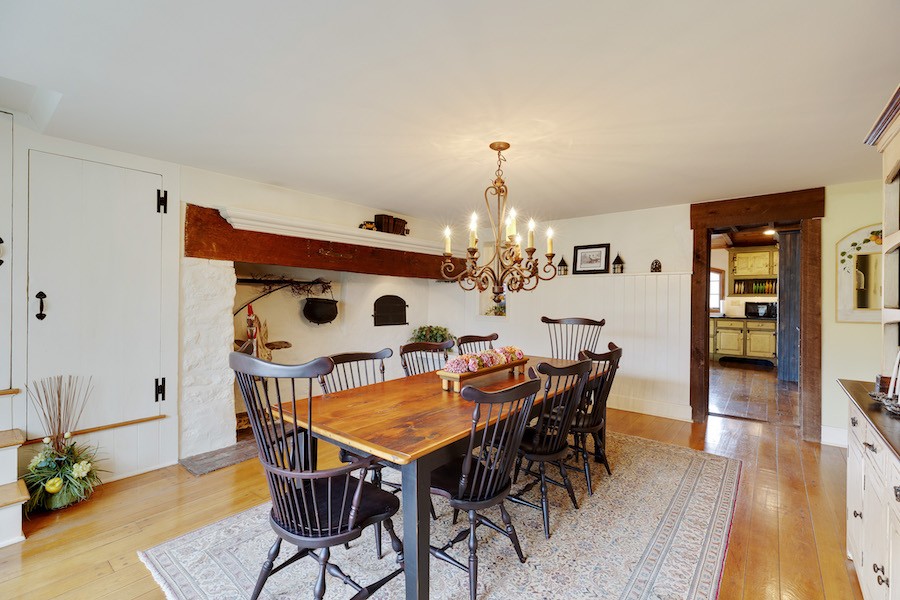 Then, in the dining room, you find clear evidence that this had originally been the kitchen. Only an authenticity freak or someone building a historical theme park would go to the trouble of putting a hearth fireplace in a 20th-century house.

Listing agent Nikki Murray of Compass confirms the error. “There are documents that indicate it was built as far back as 1803,” she says.

Sounds about right to me.

But this handsome classic is far from stuck in the past. On the contrary, it has been brought into the here and now, but in a way that channels the past. 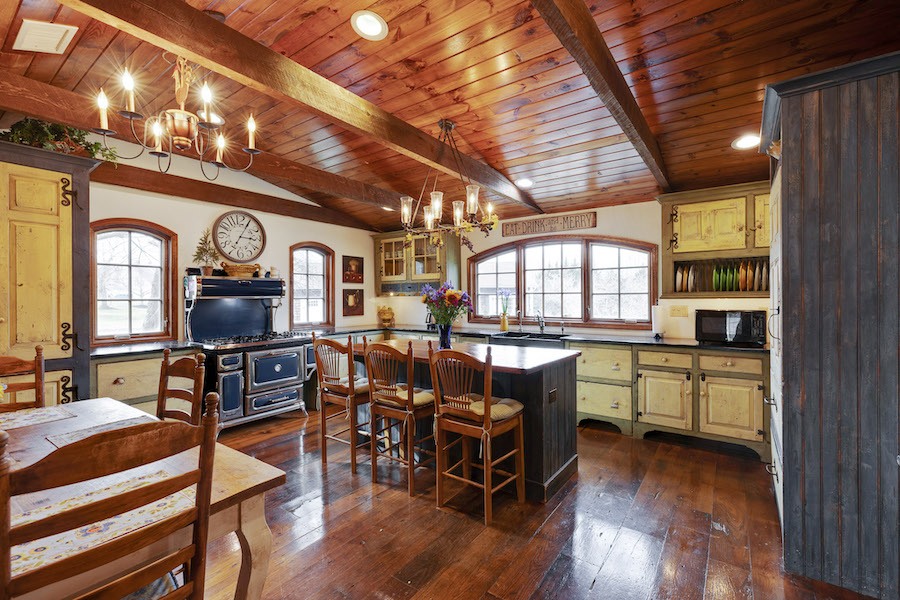 The kitchen is Exhibit A. It’s one of three rooms found in an ell that spans the back of the main floor and was added onto the house many years later, probably in the mid-20th century. 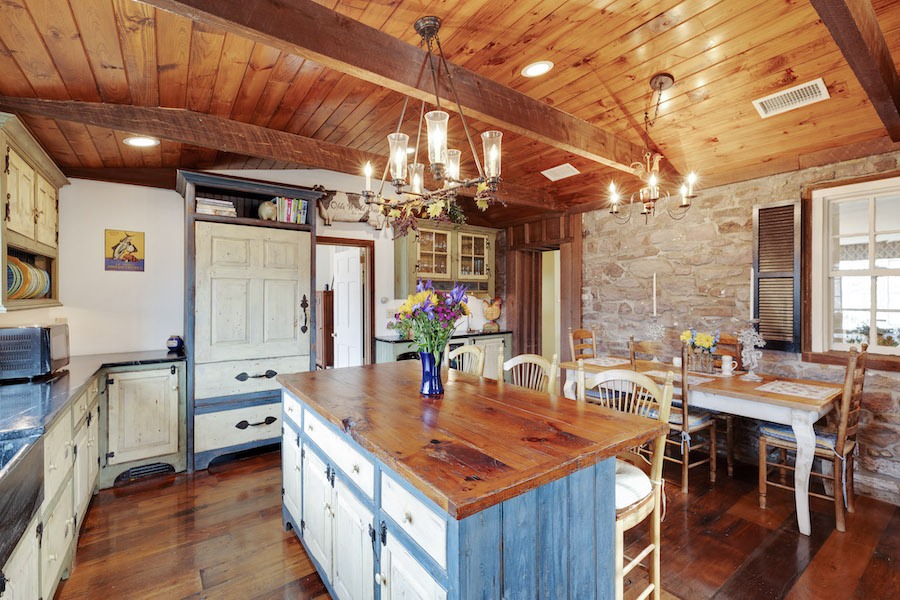 The kitchen, however, looks much older than that. Thanks to two great historical fakes — a modern range with a turn-of-the-20th-century design and a refrigerator with a wood frame and doors — this kitchen looks like it’s been part of this house for at least a century. The soapstone counters and traditional cabinetry also contribute to the look. 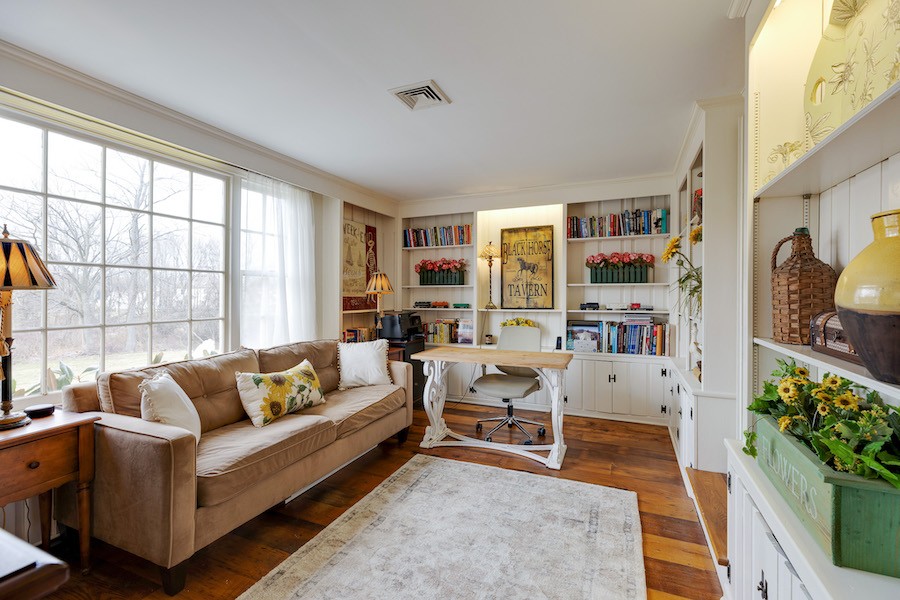 The home office off the living room, on the other hand, does have a touch of the midcentury about it, even with that antique desk and the built-in bookshelves. 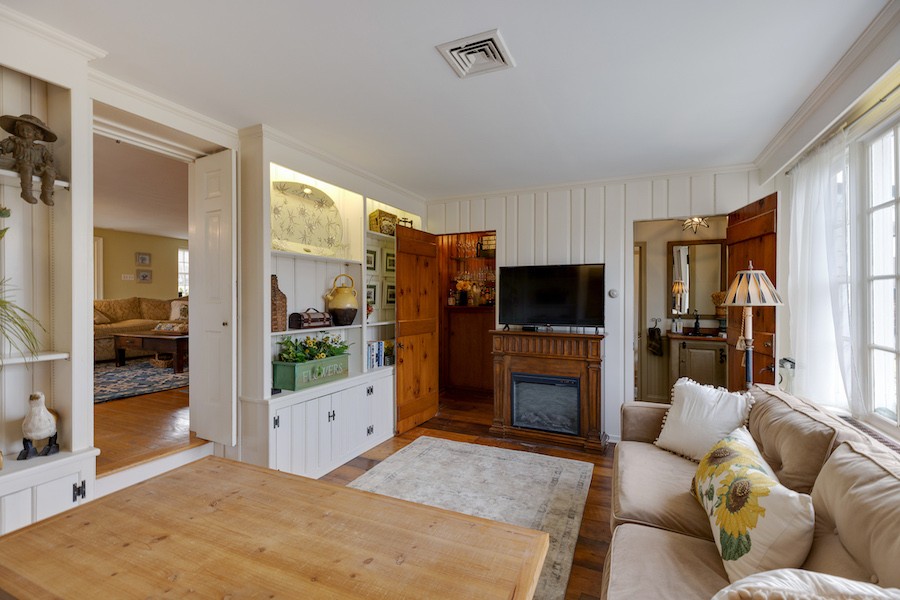 And it’s definitely set up not only for the workday but for after work as well — it has a Prohibition bar tucked into the closet to the left of the fireplace. 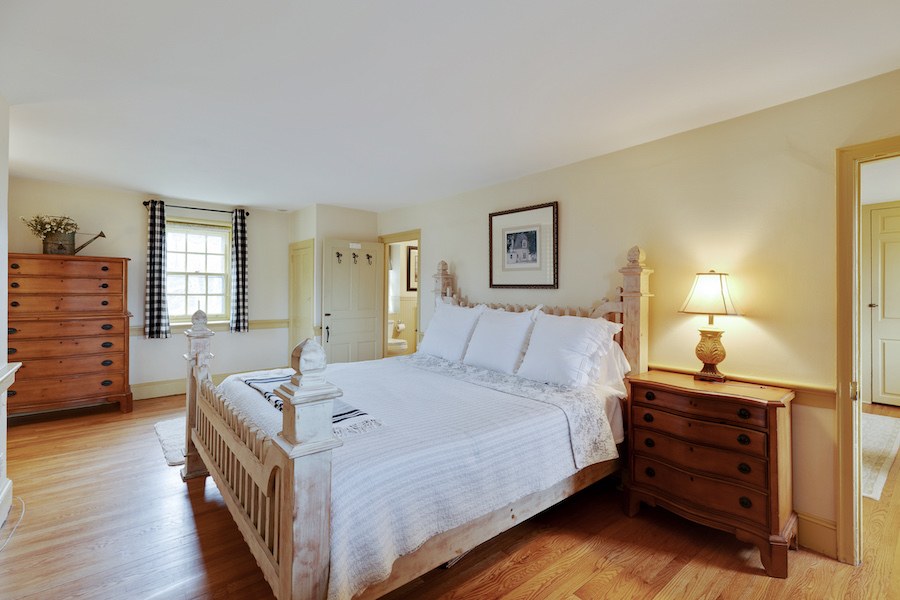 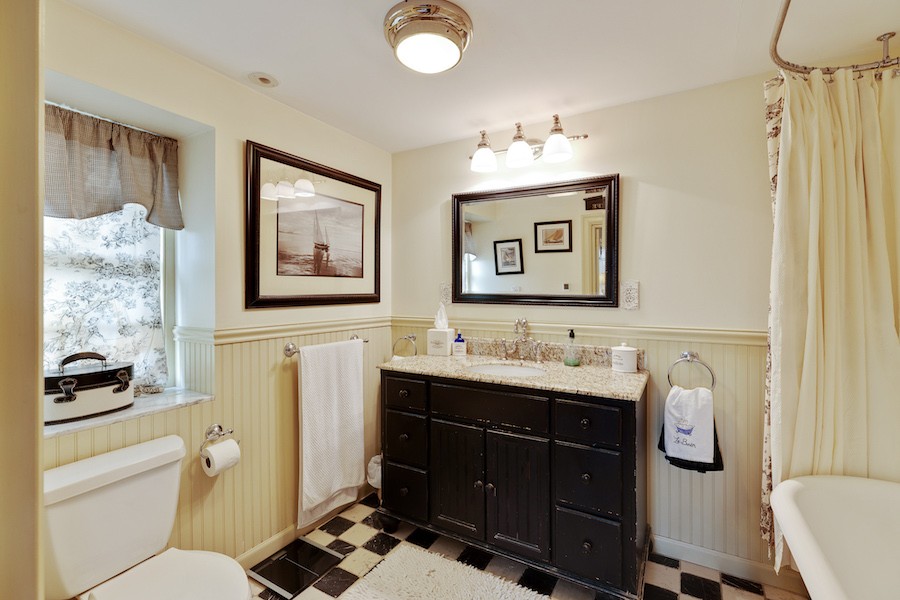 The primary bedroom suite includes a sitting room and this bathroom, which is outfitted with a clawfoot tub. 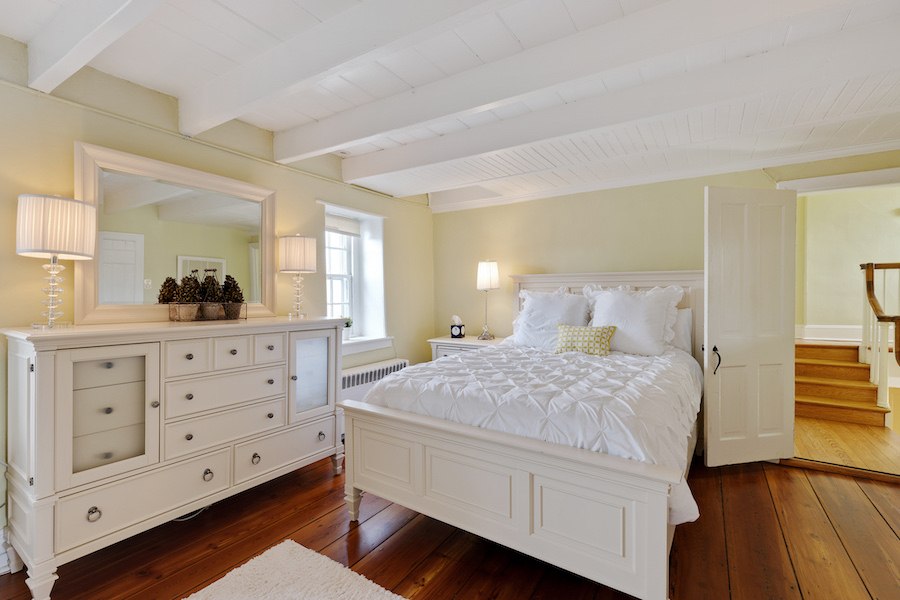 The other bedroom on this floor and one of the two on the third floor have en-suite baths. The second bedroom, which has stairs that lead to the dining room, also has a beamed ceiling. 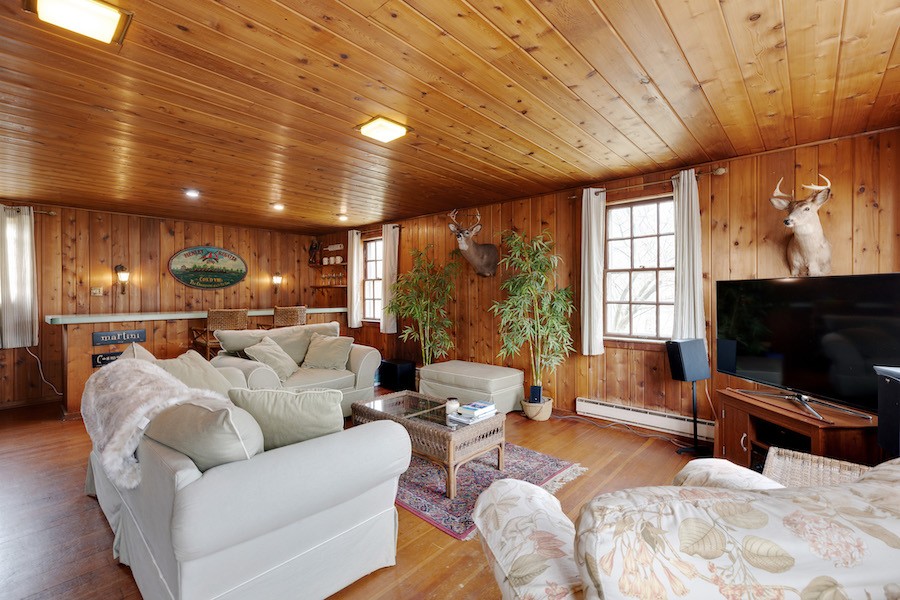 One room on this property, however, doesn’t respect the historic character and charm of this Maple Glen Colonial farmhouse for sale. It doesn’t have to, because the very 1950s knotty-pine bonus room is located in the outbuilding that contains the four-car garage. It has its own bar and powder room as well, making it ideal for many different uses: game room, media room, home gym, studio, even a second home office.

A spring house on the property provides water for the lot’s sprinkler system, and that lot backs up against a lake, which is why this property is known as Lakeview Farm.

The house has not only a lake view but other gorgeous views. As for the farm part, its 2.26-acre lot is really too small for raising anything but fruits, vegetables or chickens. But otherwise, everything about this property in the middle of suburbia still says “rural.” And not just rural — Early American rural. Here you get to have your authentic Colonial cake and eat your totally modern amenities, too.