Want a Fishtown- or Cedar Park-quality rebuild but don’t want to pay Fishtown or Cedar Park prices for it? Your prayers have been answered. 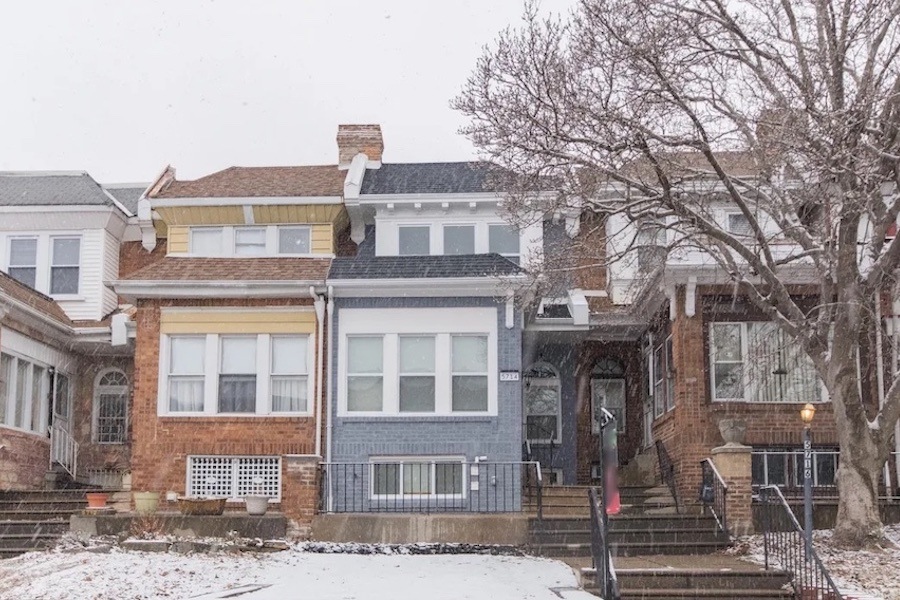 This vintage 1925 rowhouse in North Philadelphia’s Ogontz neighborhood looks pretty much as it did when it was built, save for a fresh coat of gray paint on the outside. But on the inside, it’s a dramatically different story. Wait until you see the interior of 5714 N. 16th St., Philadelphia, PA 19141 | Bright MLS images via Keller Williams Real Estate-Blue Bell

When choosing houses to feature in this section, I have only one hard-and-fast rule that I rarely violate:

No photos of empty rooms.

I break this rule only for very particular reasons. I’m breaking it today to feature a house I ordinarily would not feature, even if it’s as nicely redone as this Ogontz renovated rowhouse for sale is.

But the reason I am featuring it is because it’s in Ogontz.

I’ll wager that most of you reading this article think of a suburban Penn State campus when you hear it. (That campus, by the way, is now called Penn State-Abington.) You probably don’t think of a decent, working- and middle-middle-class Black neighborhood in upper North Philadelphia, just below West Oak Lane.

I do, because I pass it whenever I’m traveling between Center City and my home in East Germantown.

This is one of those “middle neighborhoods” that have become the concern of many an urban policy wonk. Their survival is essential to the survival of cities like Philadelphia as places everyone can call home.

And houses like this newly renovated one are signs of confidence in the future of those neighborhoods. They also help explain my “two cheers for gentrification” stance.

I won’t go into the details of why I hold that view here. If you want to discuss that with me, comment on my share of this article to my Facebook page. But one of the reasons why I don’t oppose gentrification is because the process actually can deliver benefits to the non-gentry who live in neighborhoods undergoing reinvestment.

Azmat Alvi, the Bucks County builder who renovated this house, chose it because of its neighborhood. “We don’t need to pick high-end, hot neighborhoods to work in all the time,” he says. And most of the time, he doesn’t: Most of his city projects, for instance, are located in the Northeast.

And he saw in Ogontz what he sees in the Northeast: a solid, family neighborhood.

“One of my friends said there is a house there, and he went to see the neighborhood around it,” he explains. “And it was mostly African American, middle-class, working-class people around everywhere. So I said, ‘Yeah, we should do some housing in those areas too.’”

And what he has produced here is a house built at the level of those hot-neighborhood ones at a price people like its Ogontz neighbors can afford. 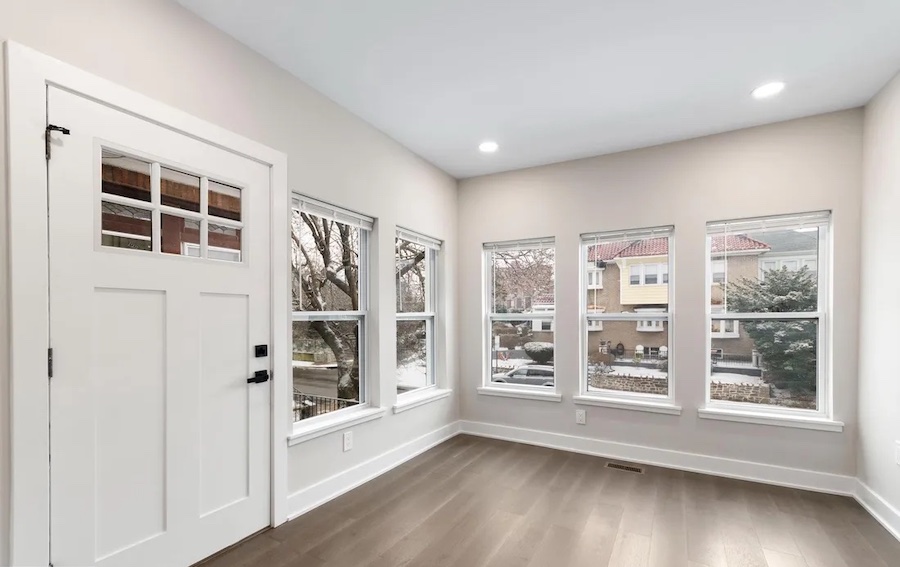 A sunny anteroom to greet you when you enter. (Many 1920s rowhouses in Philadelphia have rooms like this up front.) 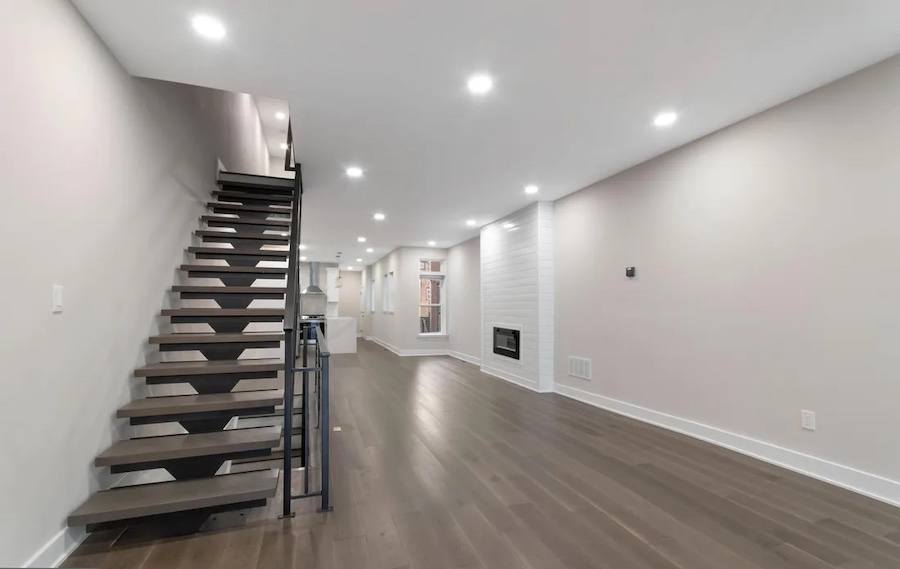 A totally open main floor with a modernist electric fireplace and floating metal staircase. Manufactured hardwood floors throughout the house. 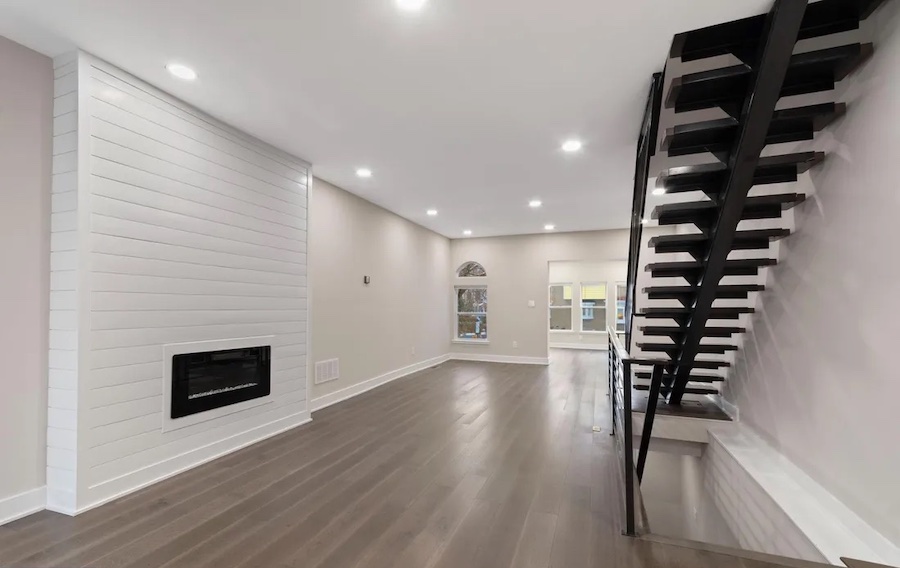 Given the placement of the fireplace, you might opt to put the dining table up front and your living-room furniture around the fireplace. 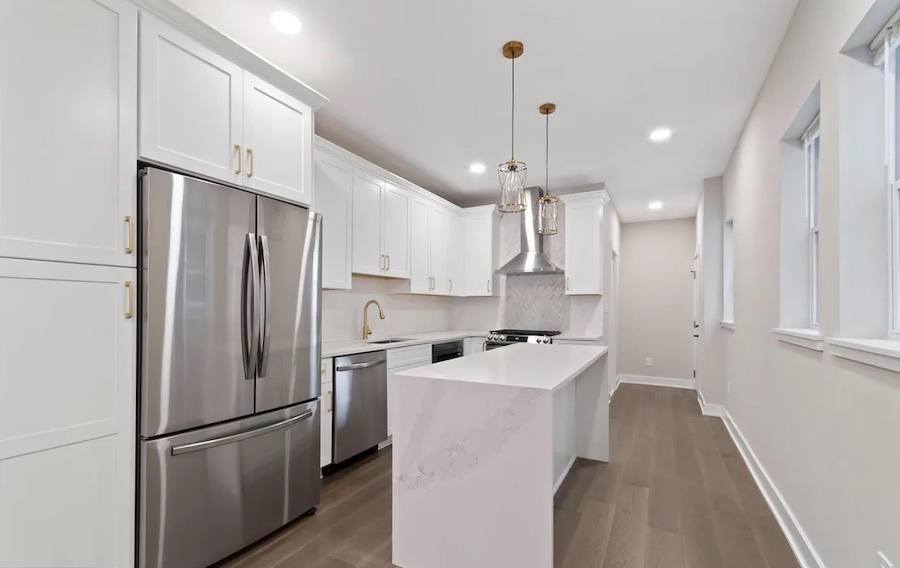 A really spiffy kitchen with modern cabinetry, quality stainless-steel appliances, and an island with a waterfall quartz countertop. 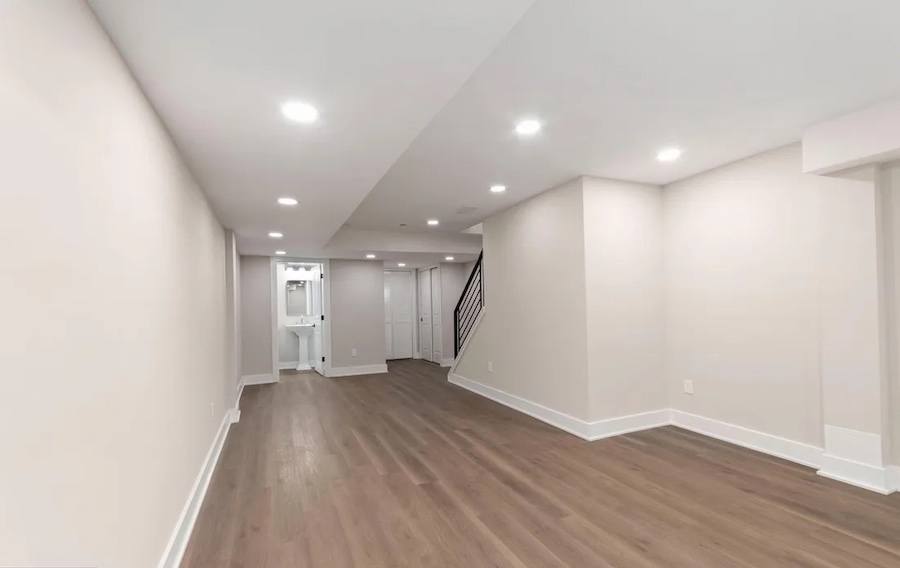 A finished basement that can be put to many uses. Equipped with a full bath, it makes a great media room, rec room or entertainment center. 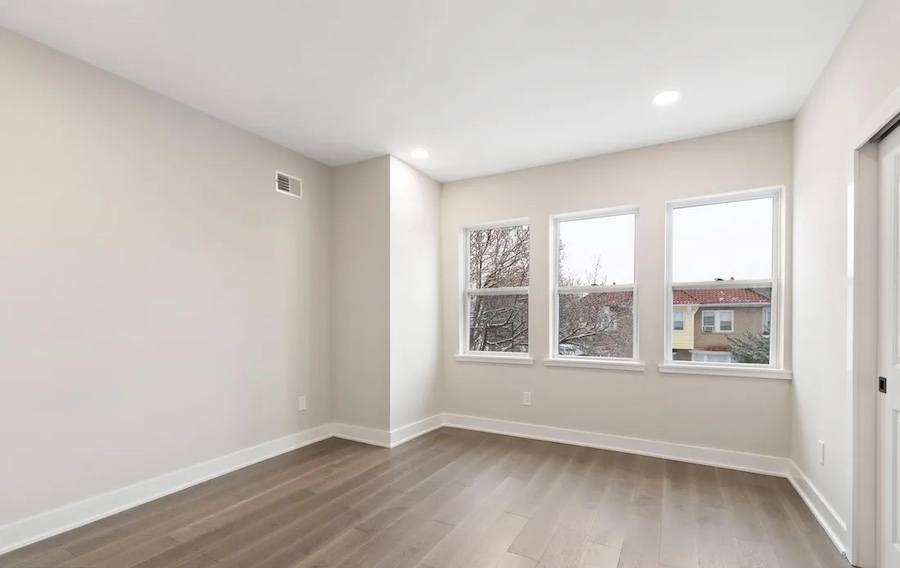 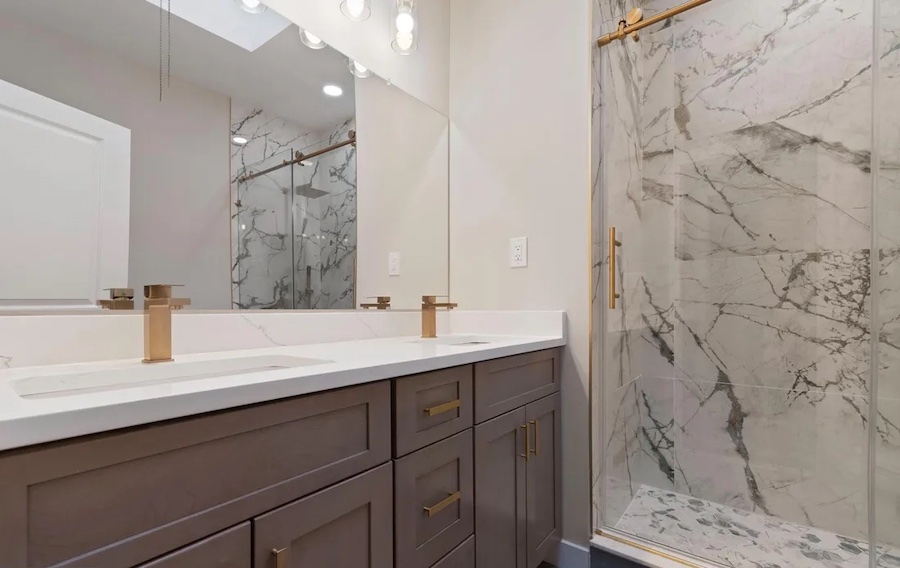 A full bathroom on every floor. This one is on that second floor. Note its modern dual vanities and marble-tile shower with a rain shower head and wand. 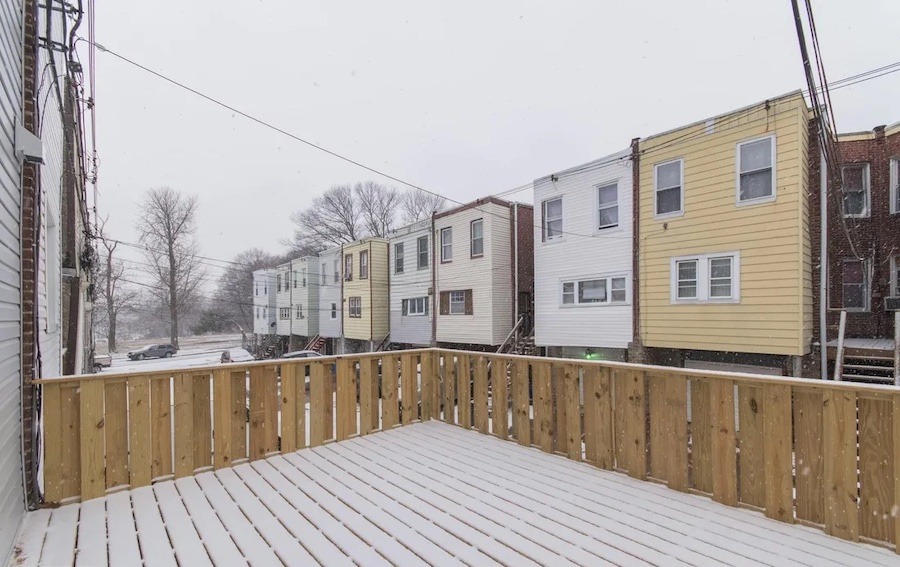 In back, a huge rear deck for outdoor relaxation.

And a very convenient location: You can walk from here to Olney Transportation Center on the Broad Street Line. The La Salle University campus and Central High School are just a few blocks to the west, Girls High a block to the south, and a recently redone neighborhood park is right at the south end of your block.

Head west on Chew Avenue, and in about a half-mile you will reach the Shoppes at La Salle, where you will find a Rite Aid drugstore and a Fresh Grocer supermarket. (You might even run into me at one of those two places, or at the Aldi about a half-mile northeast of here on Broad Street.)

In all, this handsome Ogontz renovated rowhouse for sale has 2,600 square feet of space, not counting the basement. It’s sized right for a growing family and priced within its reach.

Alvi, who emigrated to the United States from Pakistan, says that Ogontz reminds him of neighborhoods in his native country, where families live close together and know one another. That and his insistence on providing good value for the money led him to renovate this house.

“I firmly believe that if somebody should buy a house, they should have the best option available to them, from me at least,” he says. He has definitely kept that commitment here. And were it not for the wave of redevelopment and reinvestment that has transformed many city neighborhoods (yes, the dreaded “gentrification”), Ogontz residents might not have gotten this better option, either.

Sharyn Soliman, the Keller Williams agent marketing this house, calls it one of the nicer rehabs she has handled. I couldn’t agree with her more. Sure, you could pay $600,000 for a house that looks like this. But this proves that you don’t have to.