On the Market: Compact Colonial Estate in Queen Village

The owners who acquired this house at auction four years ago are moving on, and they’re leaving it in better shape than they found it. 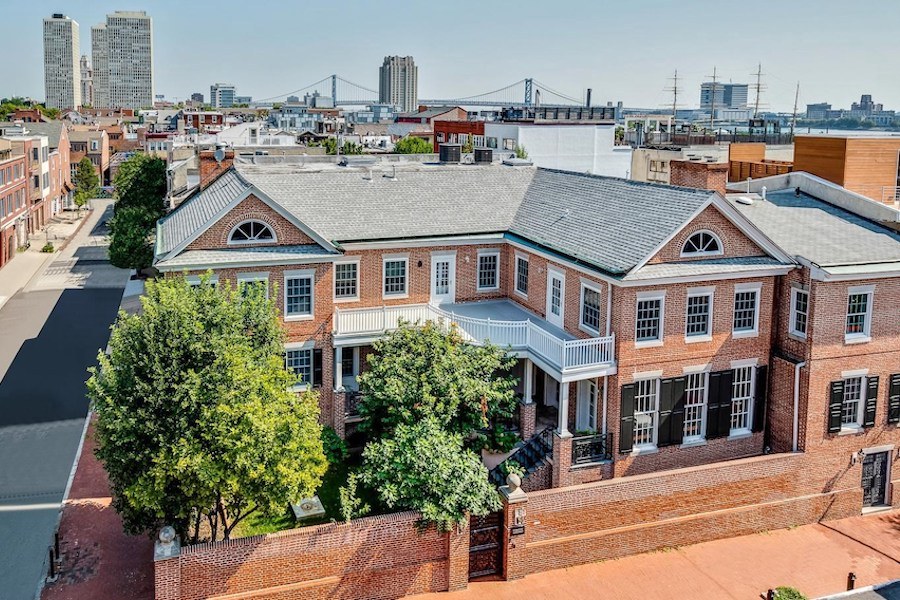 This sprawling house actually sits on an ample lot by city standards. But when you build a nearly 7,000-square-foot mansion on it, it’s going to look small. But that lot is just about the only thing that’s small about 113-21 Bainbridge St., Philadelphia, PA 19147 | Bright MLS images via BHHS Fox & Roach Realtors

The Steen mansion on Bainbridge Street in Queen Village seems to have spent as much time on the market as off over the last seven-plus years.

This Colonial Revival mansion on a lot — five of them put together, actually — barely big enough to hold it, built in 1980, first went up for sale in the spring of 2014. After sitting on the market for nearly a year with no takers, its builder-owner, outdoor advertising magnate Terry Steen, cut its asking price by $200,000 in the spring of 2015.

Two years and still no buyers later, and with Terry passed from the scene, his widow Anita decided to dispose of the Early American-on-the-outside, Gilded Age-on-the-inside palace once and for all. She contacted Max Spann Auctions to take care of business.

Which they did. Now, four years after buying it, the owners of this Queen Village Colonial estate house for sale are ready to move on themselves, and they’ve put it on the market again.

The good news: The house they’re selling now is an improvement on the one they bought. While they kept a few rooms in their original condition, they made several significant renovations and additions that make it a little less gaudy, a little more restrained, and a lot brighter. 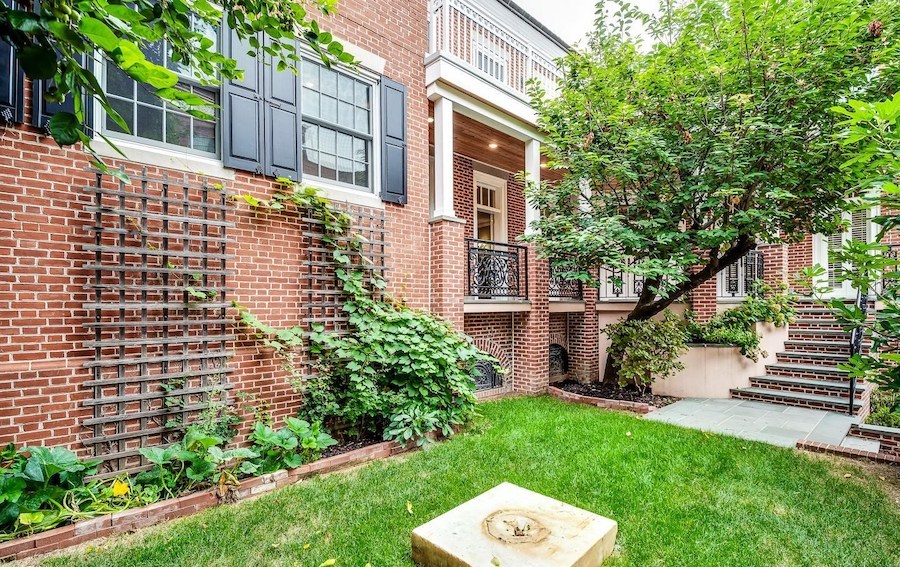 Front courtyard with statue removed from base

The changes are visible both inside and out. For starters, they removed the statue from its green front courtyard … 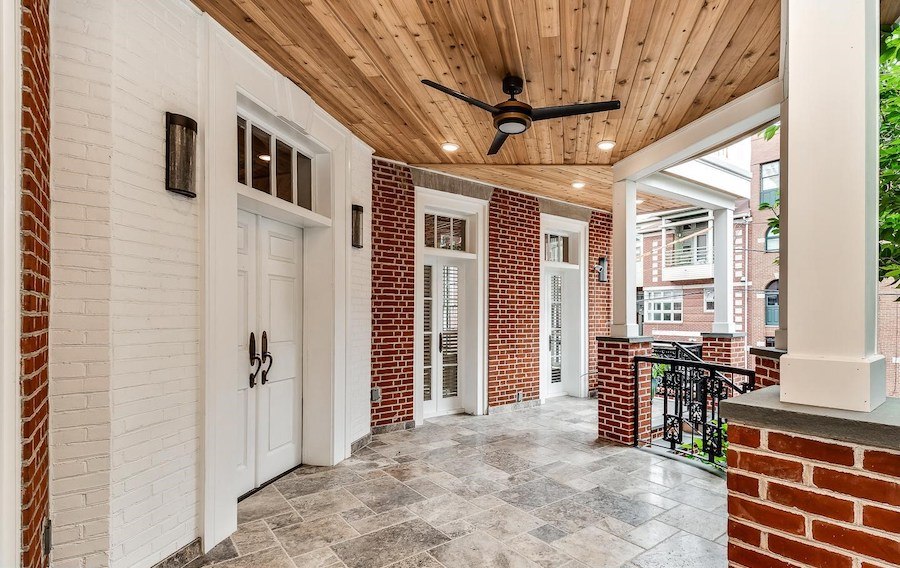 … and turned the portico over the front door into a porch that doubles as a balcony for three of the upstairs bedrooms. 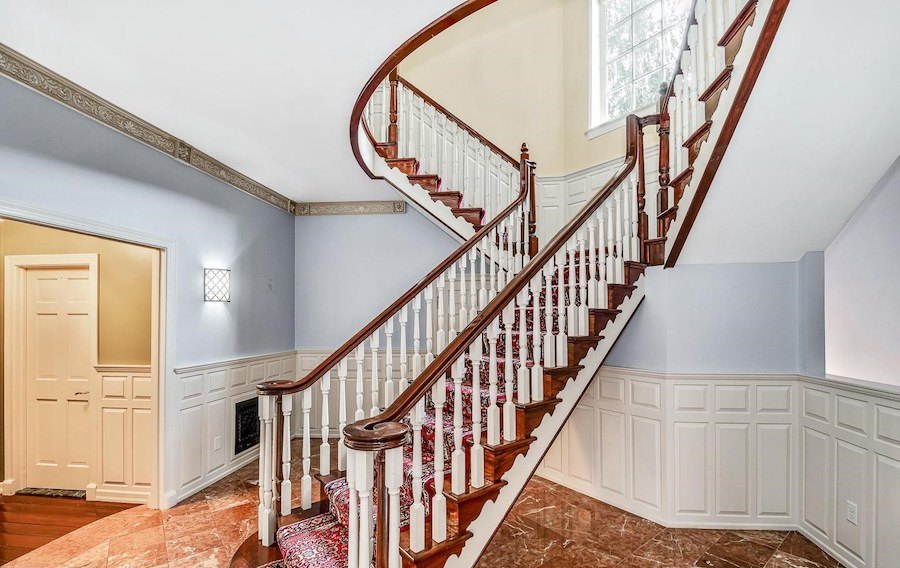 The circular foyer with its sculpture display nooks and the larger entrance hall with its grand staircase and fanlight window remain in place. 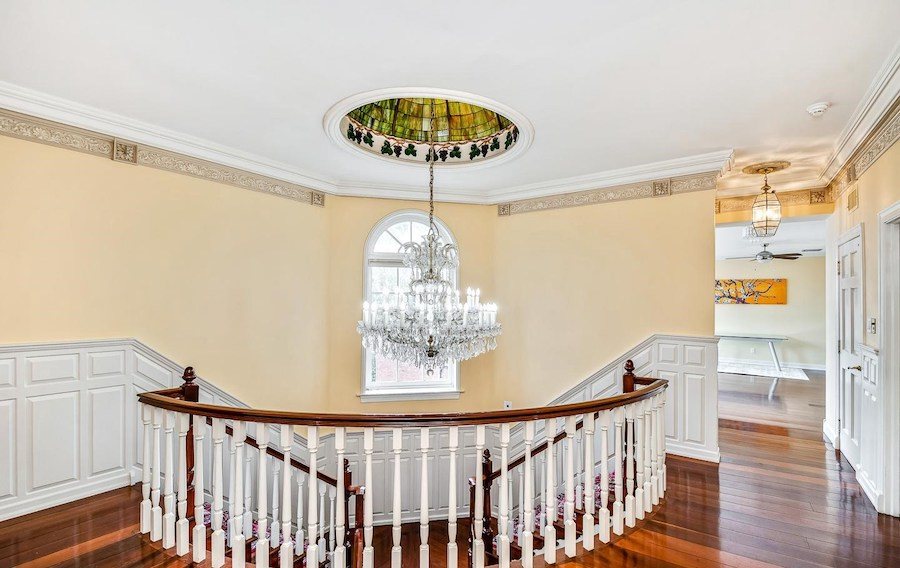 So does the stained-glass dome surrounding the chandelier that hangs over that staircase. But if you compare this photo to the ones in the earlier listings, you will note that the foyer is now much brighter, lighter and airier-looking, and the chandelier is more in keeping with this house’s basic style.

“The previous owners loved dark colors,” says listing agent Brian Stetler of BHHS Fox & Roach Realtors. “The current owners loved the dark wood, especially in the living room, but they did brighten it up and open it up as well.” 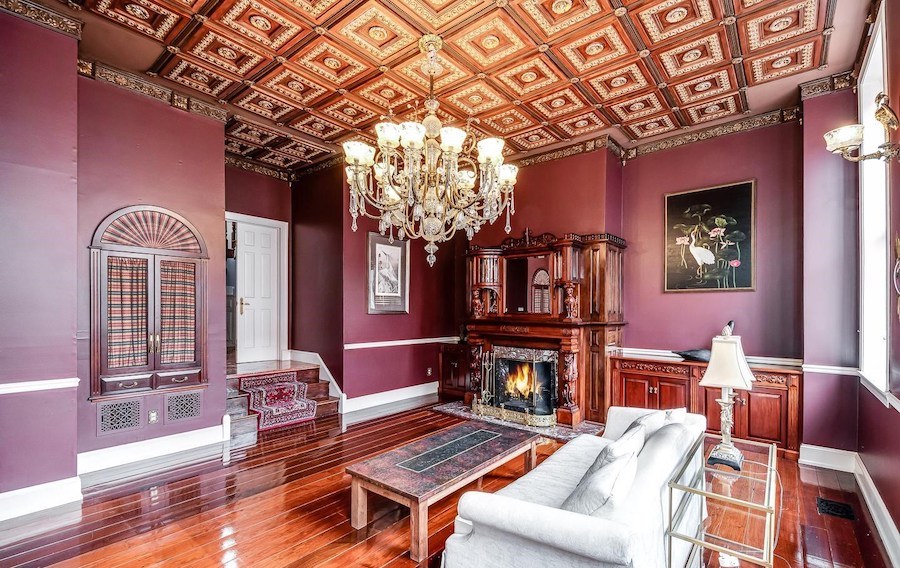 And even though they did like the living room’s generally dark and gentleman’s-clubby ambiance, they didn’t leave it completely untouched, either. They painted its walls to match the maroon coffered ceiling and added a decorated band beneath its crown molding. 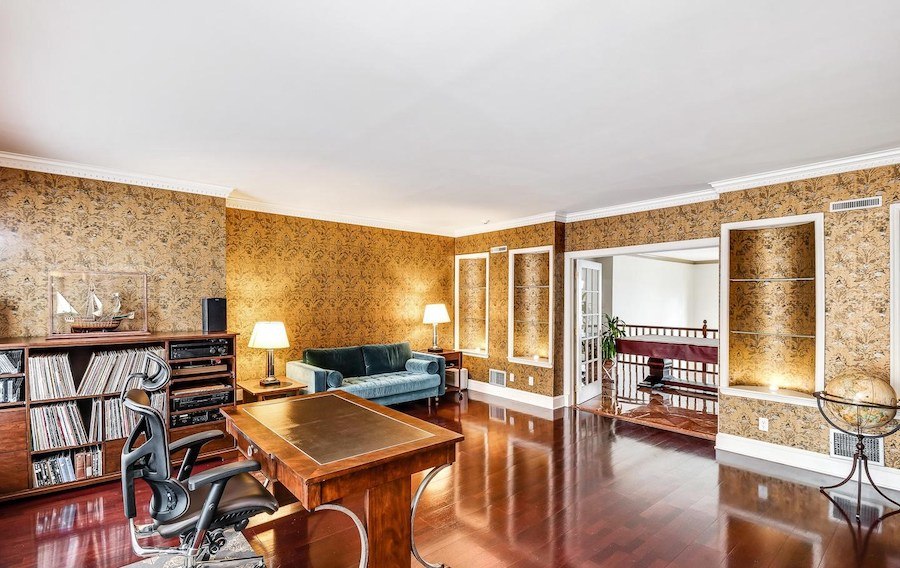 Another room they left as it was is the large home office next to the balcony overlooking the great room. It still has its gold patterned wallpaper, display nooks and dark wood bookcases. 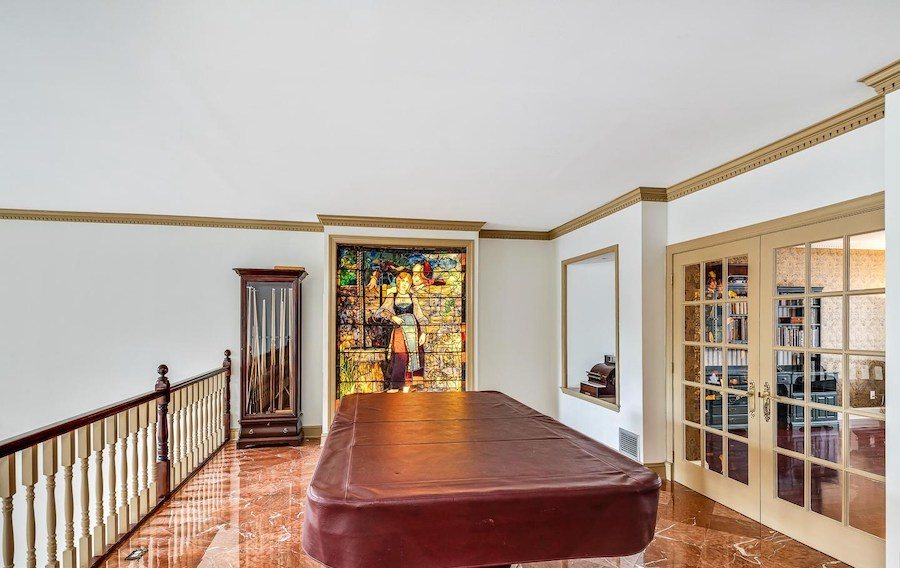 The red marble floor remains in place on the balcony, to which the owners moved the billiard table that had been in the great room below. So do the backlit stained-glass window and display nooks. But if you look carefully at this and other photos and compare them to the ones that appear in the previous listings, the current owners have a more modern sensibility when it comes to choosing artwork and decorations, including vintage ones. 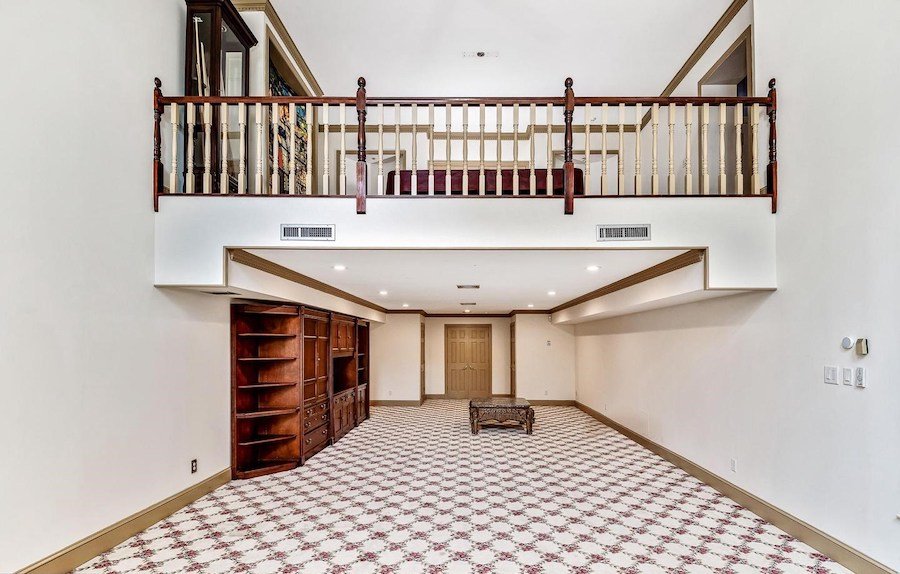 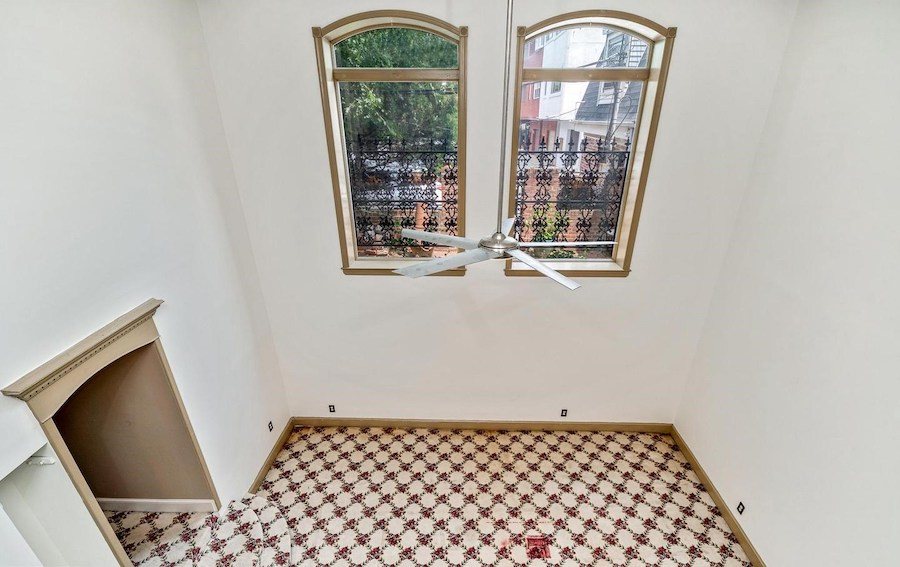 View of great room from balcony

And where this space and the great room below it had dark green walls, all the walls here are now white, which in turn make both the beige doors and trim upstairs and the darker wood cabinets downstairs stand out more.

As Stetler noted, this sort of enlightenment took place throughout the house. An even bigger change occurred in the dining room-kitchen-family-room sequence. 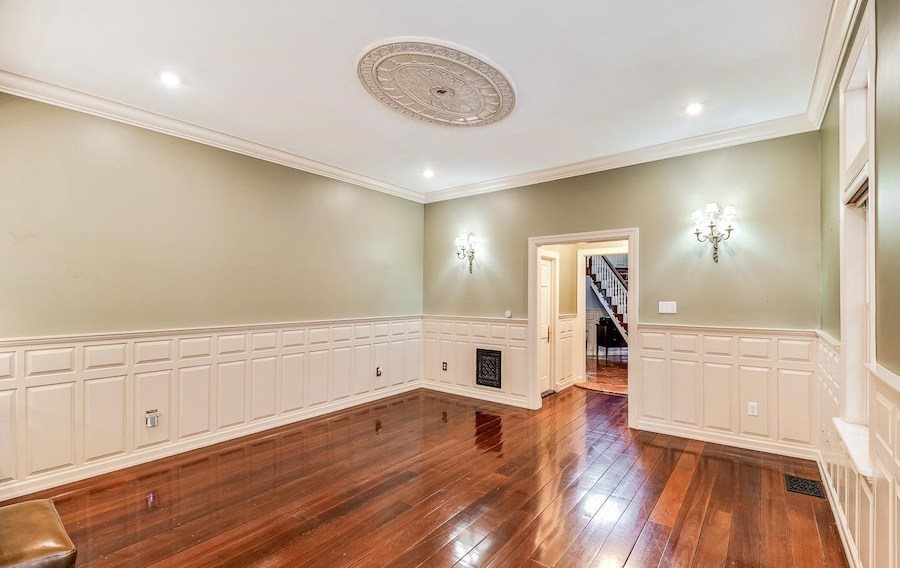 Gone from the dining room are the elaborate Gilded Age chandelier and dark green patterned wallpaper; in place of the wallpaper are solid-color olive-green walls, and you get to figure out what sort of chandelier to hang from the medallion. 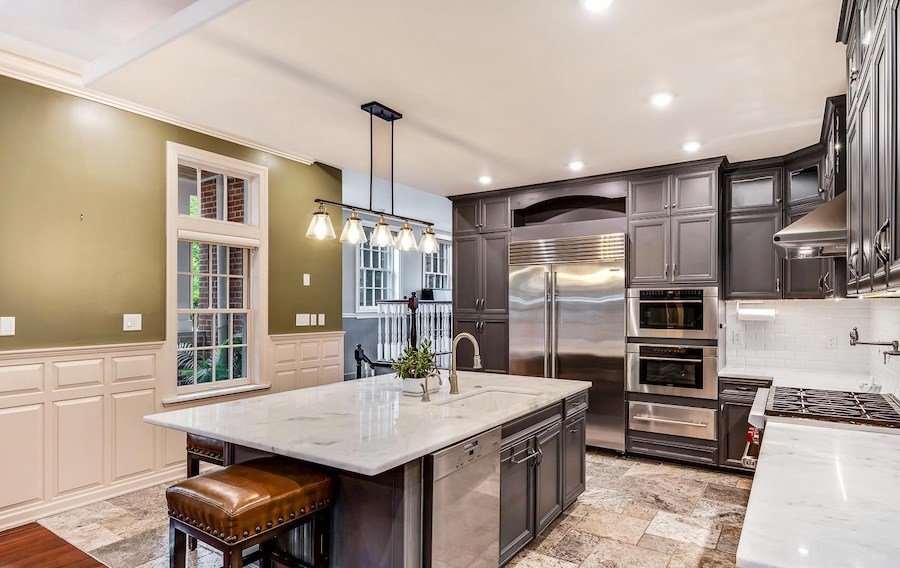 The dated-looking 1980s traditional kitchen also was discarded in favor of the more neotraditional one you see here. The wider but shallower Sub-Zero fridge was replaced by one with more conventional dimensions. In place of the electric cooktop is a six-burner Wolf gas range with a pot filler; the new wall oven and convection microwave also have a warming drawer underneath them. The kitchen also now has both a large center island with bar seating and a work desk space next to the range, not to mention simpler, more contemporary lighting and a reverse tray ceiling. 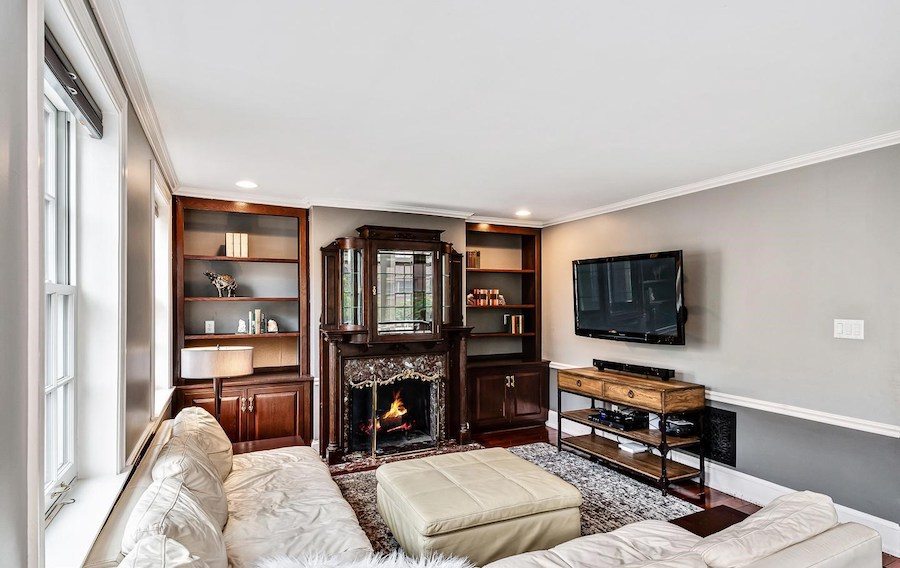 And the patterned wallpaper in the family room was swapped out for a more neutral gray that again brings the wood-burning fireplace more to the fore. 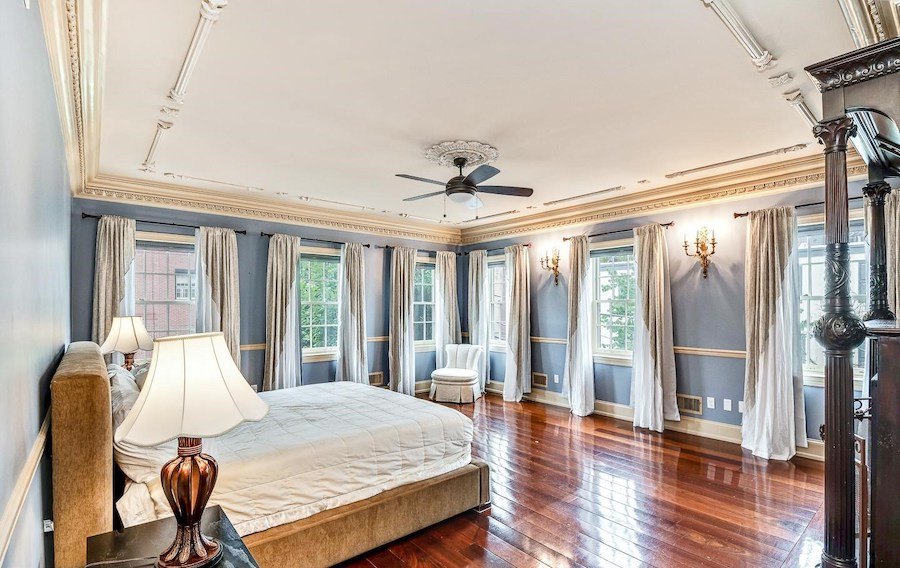 The primary-suite makeover gave its bedroom a crenellated crown molding that now has a powder-blue wall to play off against. It still has its wood-burning fireplace, but its chandelier was replaced by a modern ceiling-fan light. 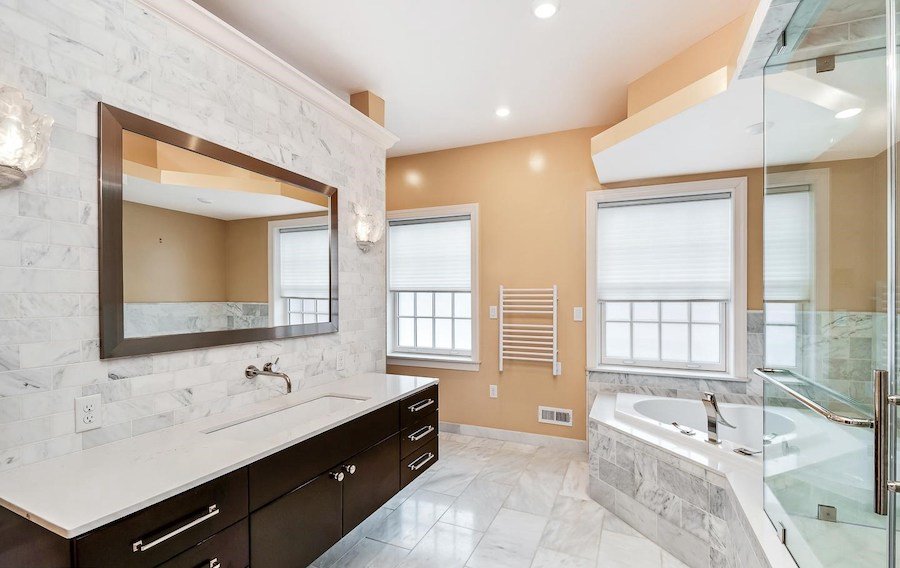 The bathroom got a more radical makeover, with contemporary cabinetry on its dual vanity, tray lighting, a soaking tub with a marble surround and a marble-lined, glass-framed stall shower. 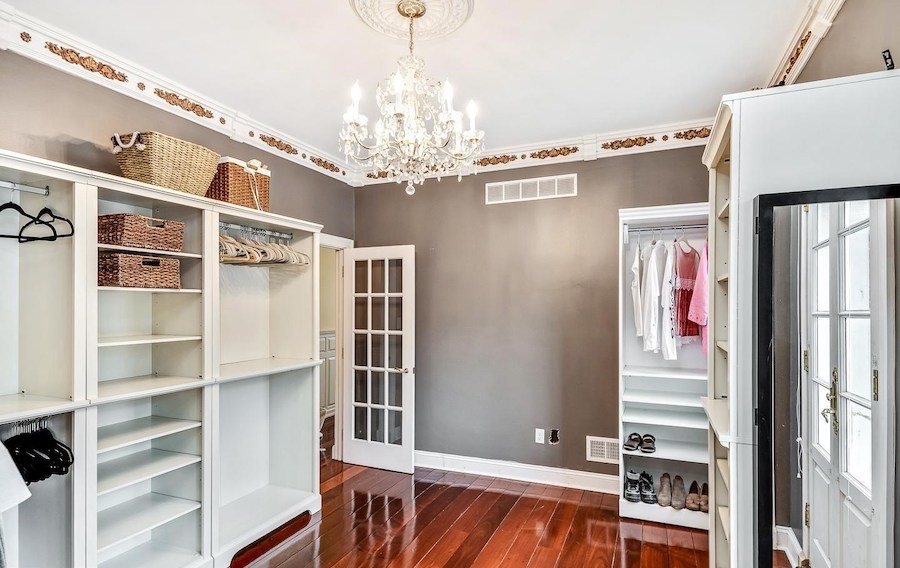 The decorations on the crown molding in the walk-in closet and dressing room got highlighted as well. And it now has a larger balcony, over the front terrace, that it shares with the secondary suite on the other side of the foyer stair hall. 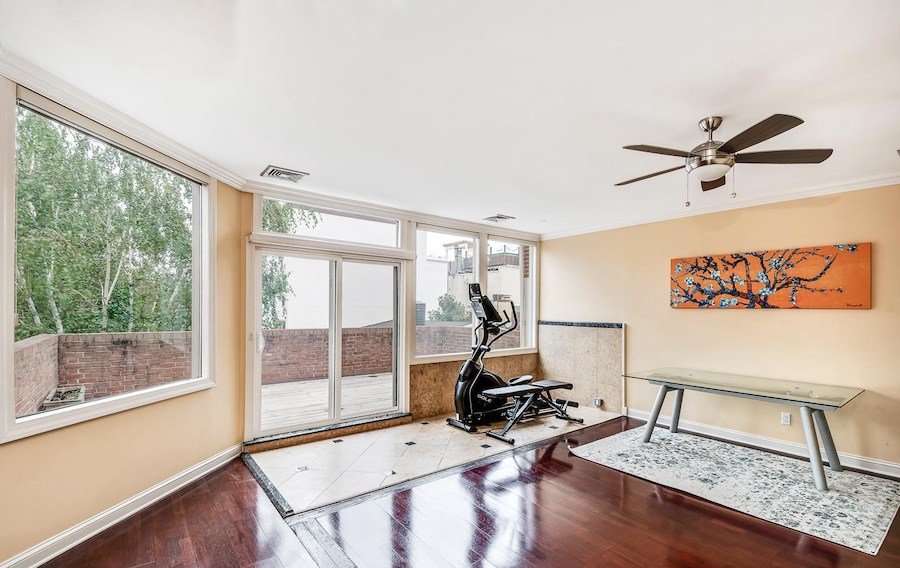 The room next to the northeast balcony on the second floor got enlarged and its hot tub was removed. It currently functions as a gym. 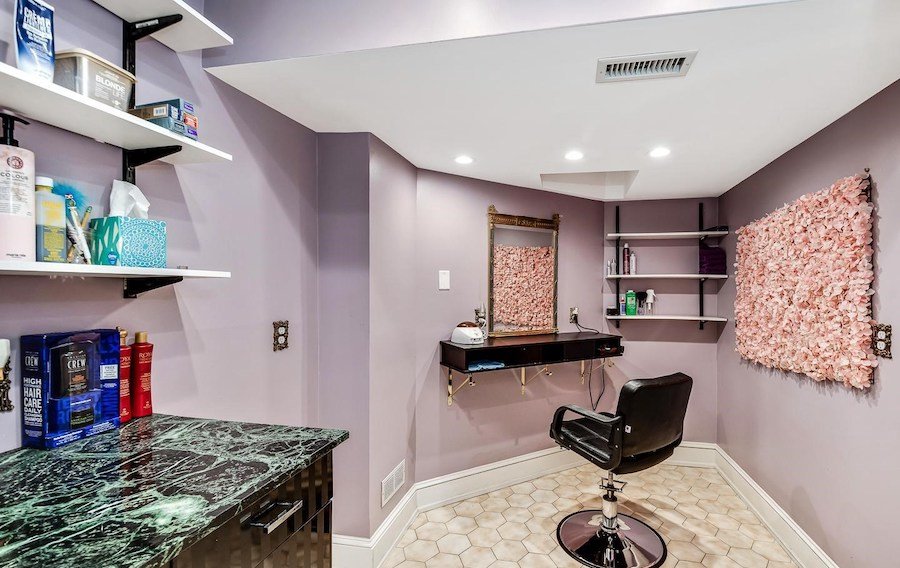 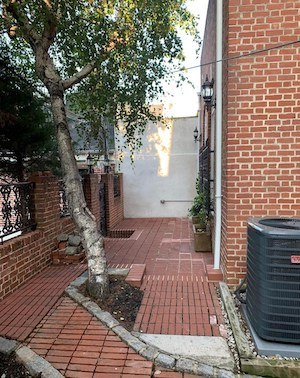 The three-car garage on the Second Street side of the house was spruced up as well. You’ll also find a salon in the basement, an unusual amenity.

About the only other feature of this house that didn’t get major alterations is the landscaped backyard.

Because of all these changes, this Queen Village Colonial estate house for sale now looks less like a bordello and more like a gracious, elegant modern home. And it still has its private greenery and its convenient location close to Head House Square, South Street, Bainbridge Green and the Delaware Riverfront.

I trust that all these improvements will make this one-of-a-kind house much easier to sell this time around. So, I’m sure, does the listing agent.