This handsome house on a private lane was designed and built to last by one of the founders of nearby Rose Valley. 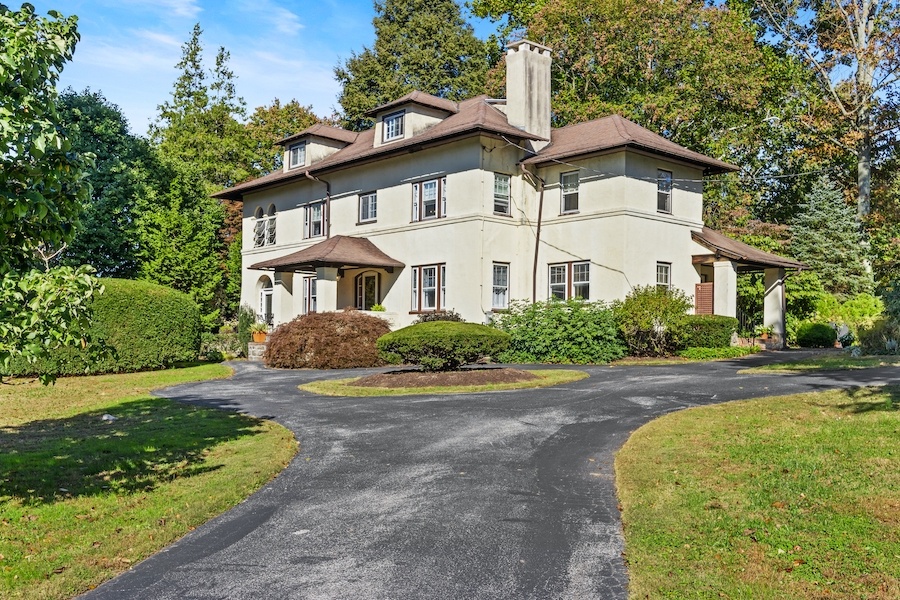 The Arts and Crafts movement sought to elevate traditional craftsmanship and artisanry to their former positions of honor. This house at 485 Bancroft Lane, Media, PA 19063, was created by architect Walter Price, one of the movement’s adherents and the brother of Rose Valley founder Walter Lightfoot Price, also an architect. | Photos: Colin Burkhardt, CDB Photography; historical photos courtesy Athanaeum of Philadelphia; all photos via BHHS Fox & Roach Realtors

Believe it or not, this complaint, heard so often nowadays, was also being leveled at builders at the turn of the 20th century, too. As mass production replaced the handmade and homespun and as tract houses spread across not just working-class city neighborhoods but also suburbs for the better off, a coterie of artists, artisans, philosophers and social critics began promoting an ethos that valued craftsmanship and attempted to revive honest artistry. This came to be known as the Arts and Crafts movement, and its magazine, The Craftsman, gave its name to the house style that survived it.

One of the early adopters of the Arts and Crafts philosophy in this area was architect William Lightfoot Price, one of a trio of brothers who all became architects: William, Frank and Walter.

William set out to create a model community that embodied Arts and Crafts principles and would appeal to the like-minded. His first such effort — Arden, Del., founded in 1900 —became a haven for supporters of Henry George’s single-tax movement instead.

His second proved more durable: Rose Valley, the famed community of artists, thinkers and nonconformists southwest of Swarthmore and southeast of Media, established in 1901. One of its initial investors: Walter Price.

Walter also designed one of the first houses in Rose Valley: “Rose Hedge,” an Italianate residence fashioned in 1902 out of an early-19th-century farmhouse.

This Moylan Italianate Colonial house for sale, designed and built by Walter Price in 1915, is both the spiritual and architectural descendant of Rose Hedge.

While it does not have the trademark lines and woodwork of Arts and Crafts houses, it does have some Craftsman elements in it, and it also displays the same commitment to quality and artistry found in such houses. 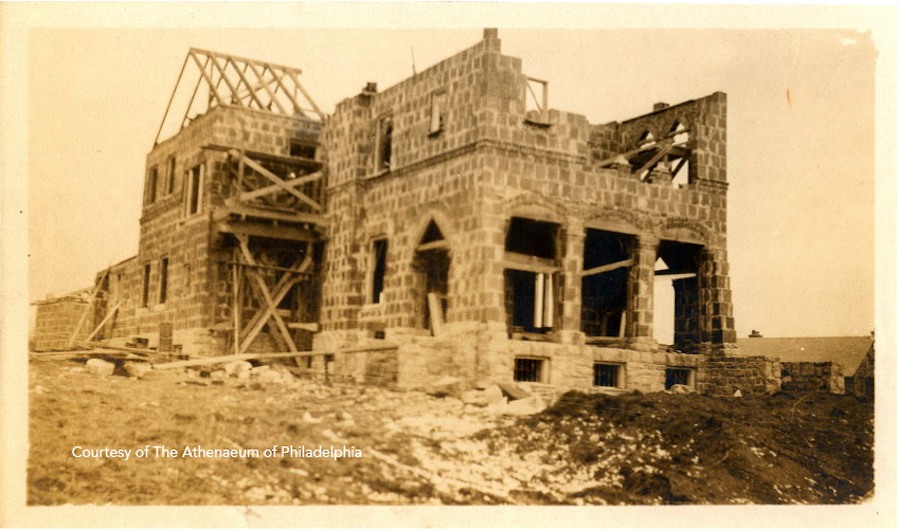 The Heulings house under construction in 1915

And, as this photo of the house under construction shows, it was built to last. 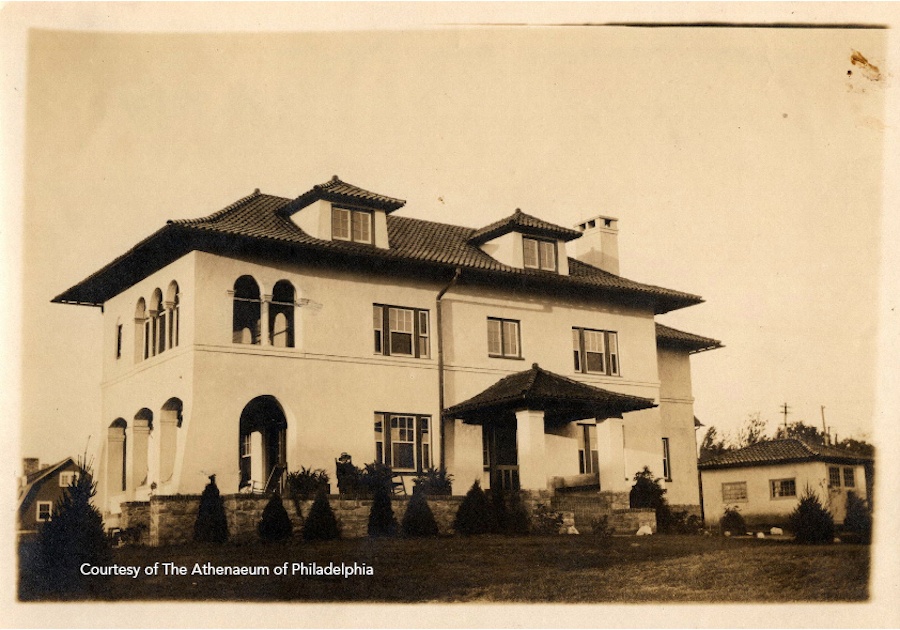 The Huelings house when finished. Walter Price would build his identical but smaller house across the street the following year

This house is actually a larger version of the house Walter Price designed for himself, which sits across Bancroft Road from this one. Legend has it that this came about when Hugh Heulings, a successful salesman for trolley manufacturer J.G. Brill Co., visited Price at Rose Hedge and saw the plans for that house on his drafting table. “Build me a house like yours, only a little larger,” he reportedly said.

You now have a chance to become its third owner. And if you buy it, you will also get the original blueprints. 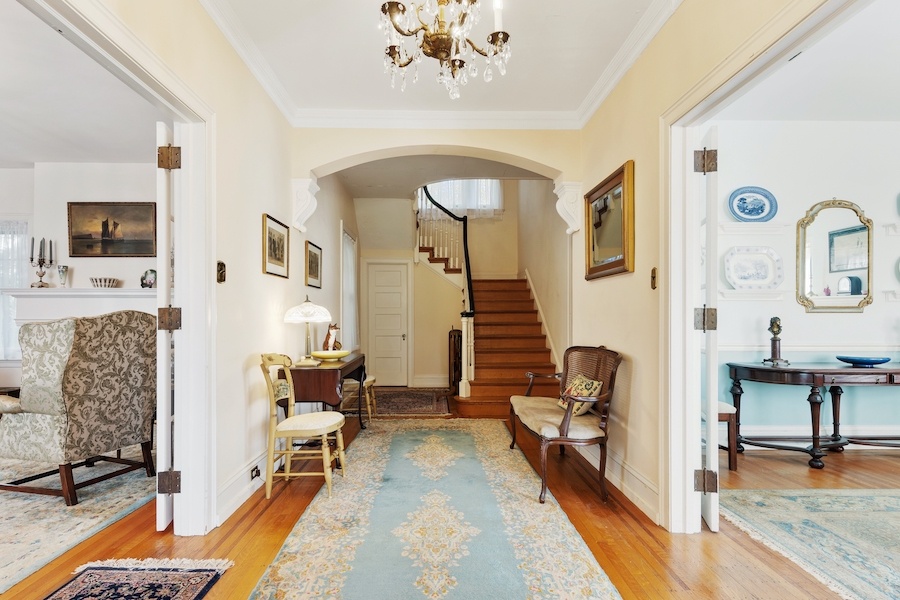 The house may have an Italianate exterior, but on the inside, it’s a true center-hall Colonial, with its main-floor rooms laid out on either side of its center entrance hall. The entrance hall, living room and dining room all have their original oak floors with walnut inlays, one of a number of original elements that survive in this house to this day. 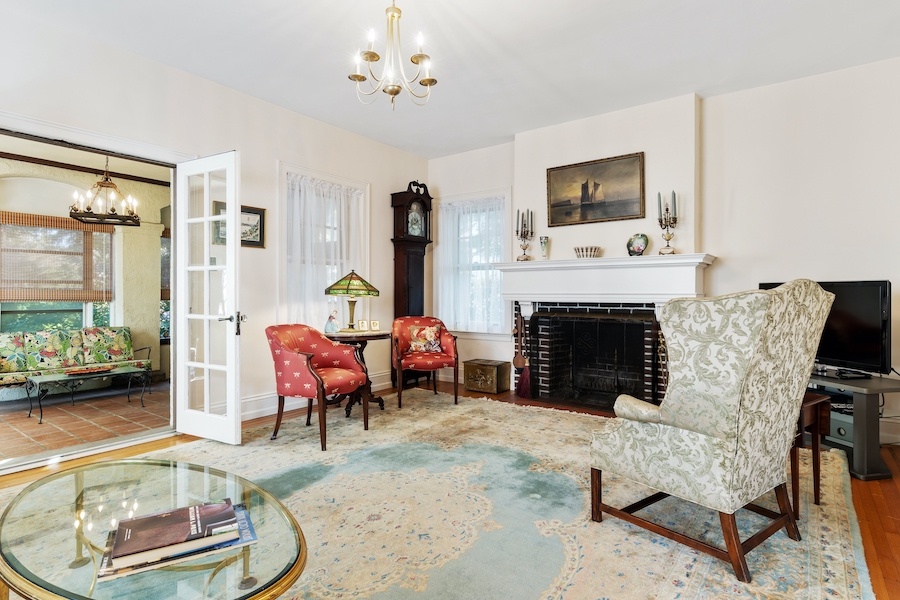 To the left of the foyer sits the living room, whose fireplace — one of four working fireplaces in this house — is framed in brick and has a classic Colonial mantel. But note how the absence of crown moldings give it a simpler look and feel. 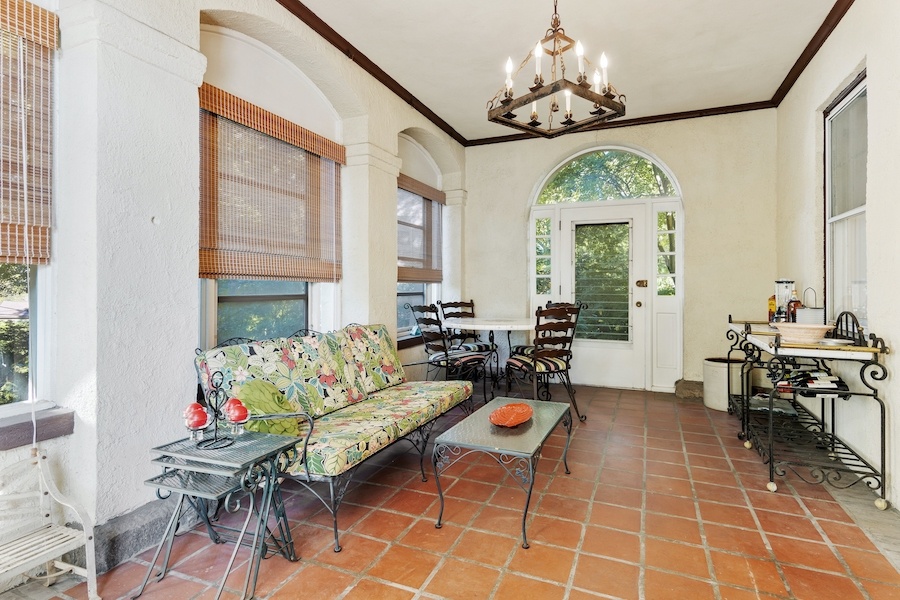 The sunroom beyond the living room has a more Mediterranean look and feel, not to mention more substantial stucco-clad columns that recall Craftsman style. The room originally was an open side porch. 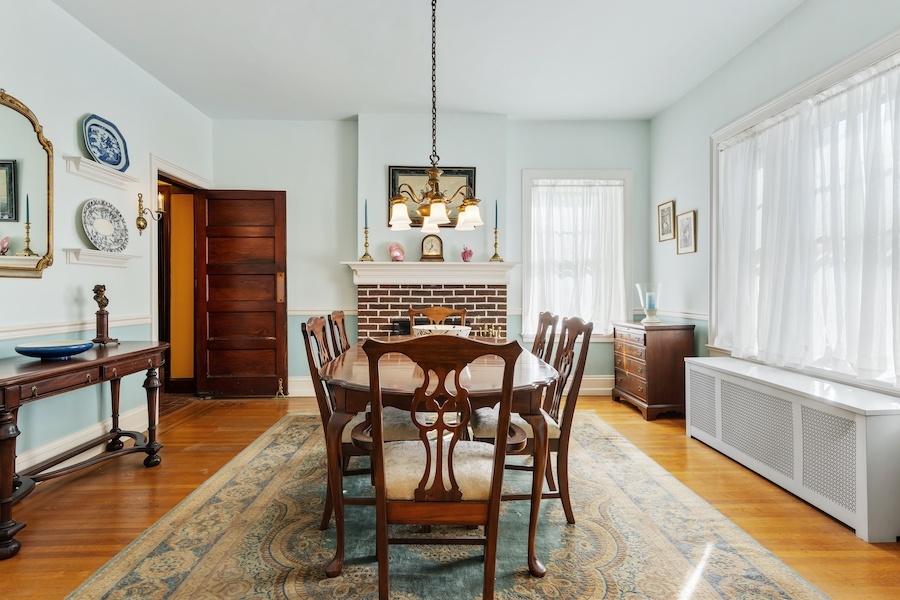 To the right of the foyer lies the formal dining room. Its decor and style is more in line with tastes of the day, and its chandelier, like the one in the sunroom, is original to the house. So is the five-panel door, something found in Craftsman but not Colonial houses. 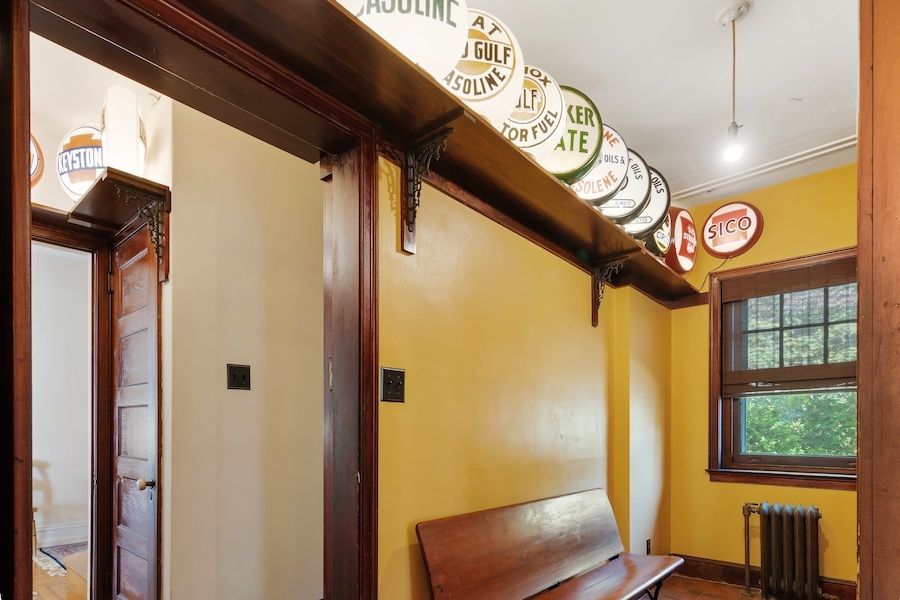 That door leads to the butler’s pantry, next to which you find the servant’s staircase. The current owner, who has lived in this house for 50 years, has amassed an impressive collection of vintage gas-station fuel pump globes. These will leave the house along with the owner once the sale closes. 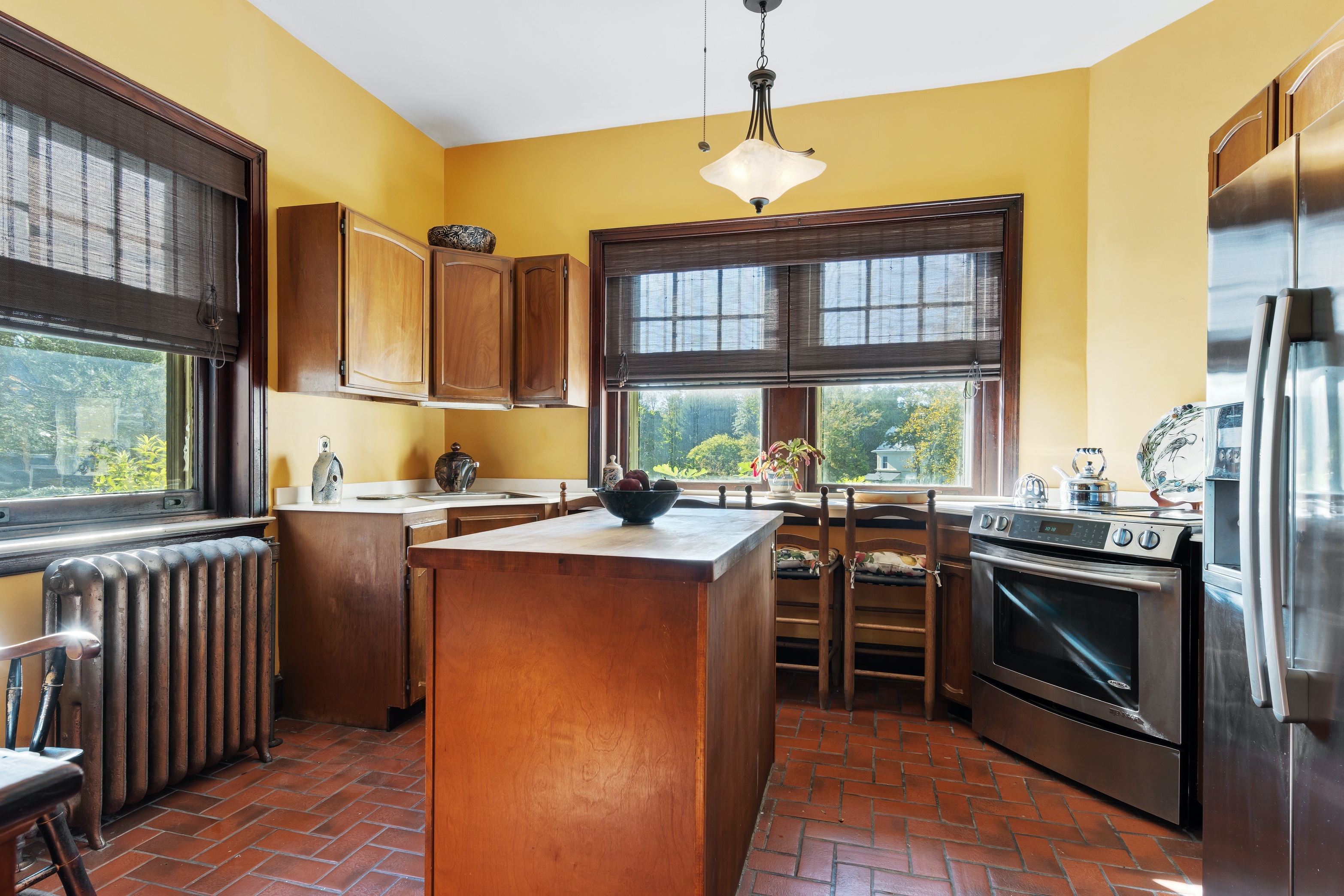 The kitchen actually occupies a wing off the house’s east wing. This room has been brought up to date where it counts, with a unique cutoff corner where the stove is located. Here you can see the Craftsman influence in its windows. The laundry room occupies a one-story ell behind the kitchen. 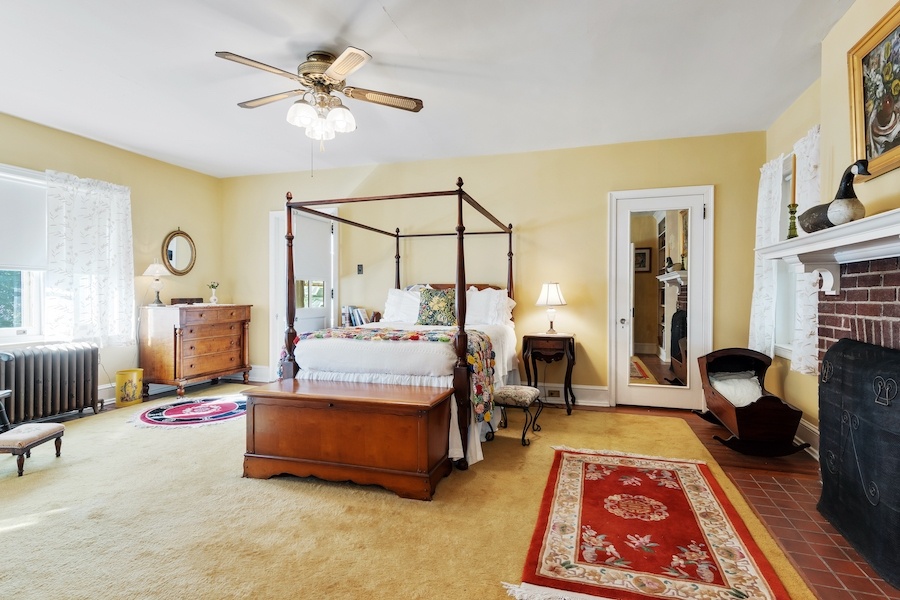 The second floor contains three bedrooms. The primary bedroom suite lies to the left, or west, side of the central hall. Both it and the front bedroom across the hall have fireplaces. 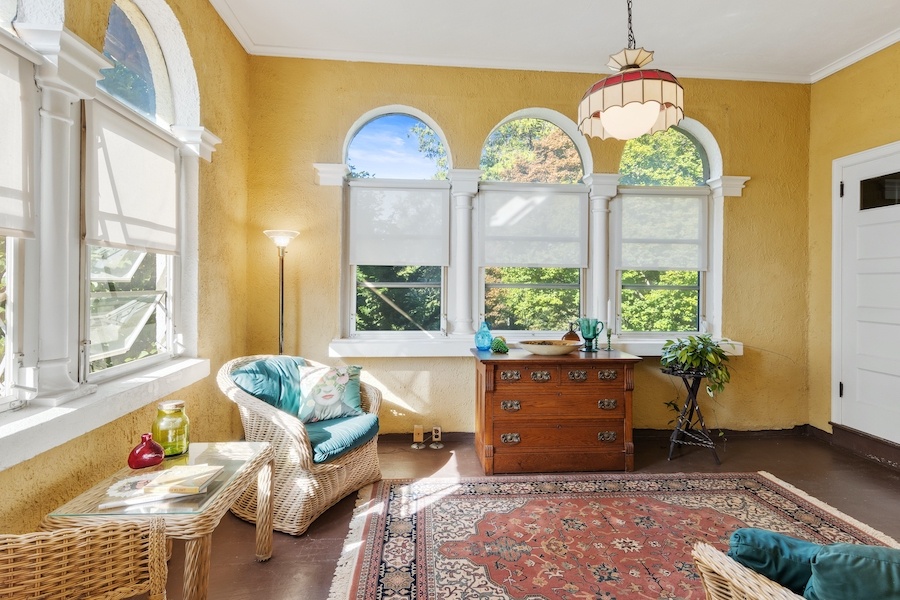 In addition to its spacious bedroom, it also has a sleeping porch located over the first-floor sunroom. Also formerly open, it contains one of the suite’s three closets; the other two are in the bedroom. 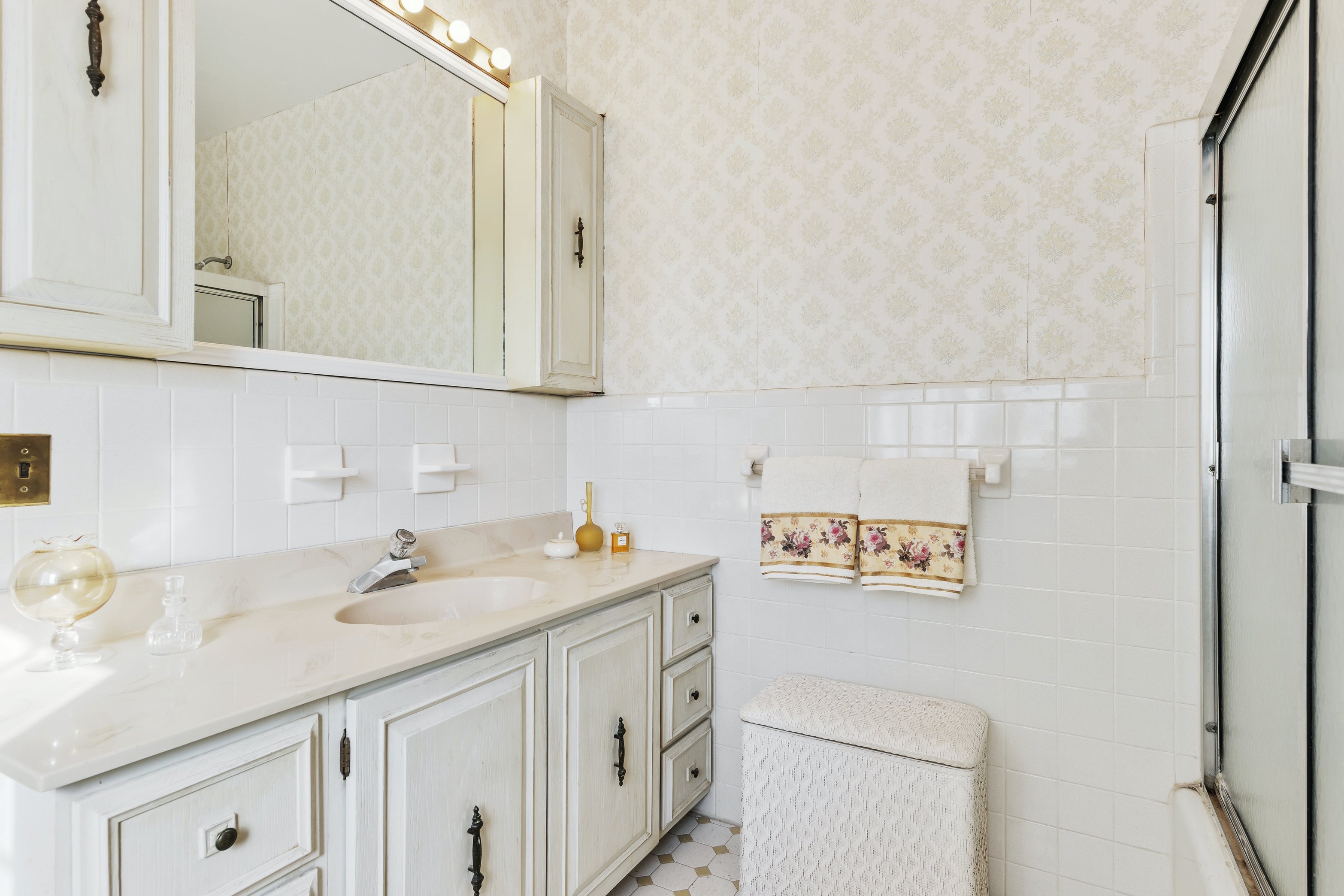 And, of course, it has an en-suite bathroom. The two other bedrooms on this floor share a recently updated hall bath.

The fourth bedroom, which used to be the servant’s quarters, is on the third floor along with a full bath and a sizable attic for storing things. 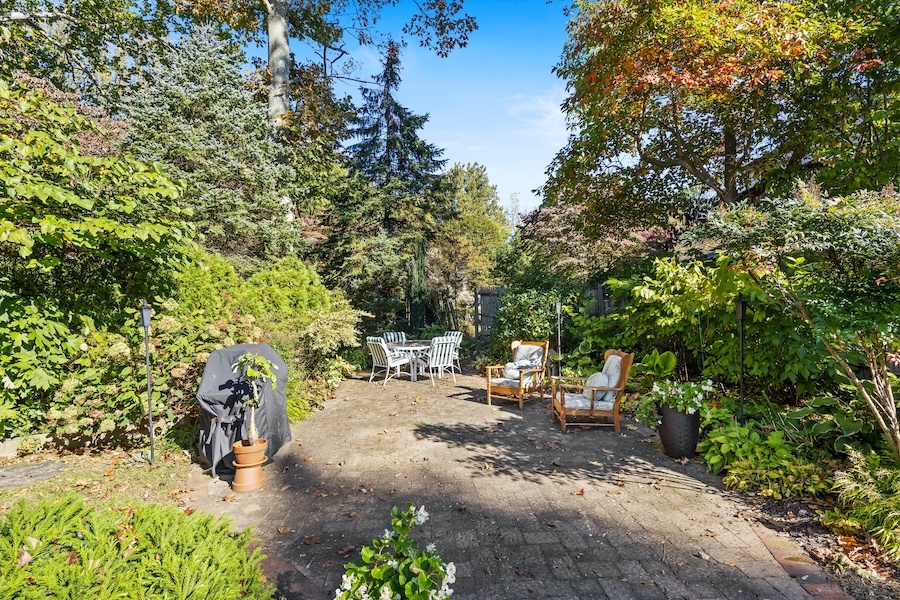 This house’s owner is also an avid gardener, and as a result, this house is nicely landscaped. A large copper beech dominates its front yard, and in the back is a grotto-like patio surrounded by shrubs and perennials.

This Moylan Italianate Colonial house for sale sits just a short walk from Moylan/Rose Valley Regional Rail station on Bancroft Road, a private street named for the family that once owned the land on which it and this house sit. Quakers who emigrated from England in the 1820s, the Bancrofts made their money building and operating a series of woolen mills along Ridley Creek in the Providence townships; the land in Nether Providence Township on which this house sits was part of a mill complex the family acquired from John Fox in 1870.

Clearly, this handsome, sturdy house has quite a pedigree and history. By now, you should have guessed who’s marketing it.

OTHER STUFF: This house also has its original one-story detached garage, and you can park seven more cars in its driveway.