On the Market: Historic Farmhouse in East Earl

This 18th-century farmstead predates the inn that gave Blue Ball its name. Not only is it a history lesson in itself, but it also has historical connections that stretch all the way to our 16th President. 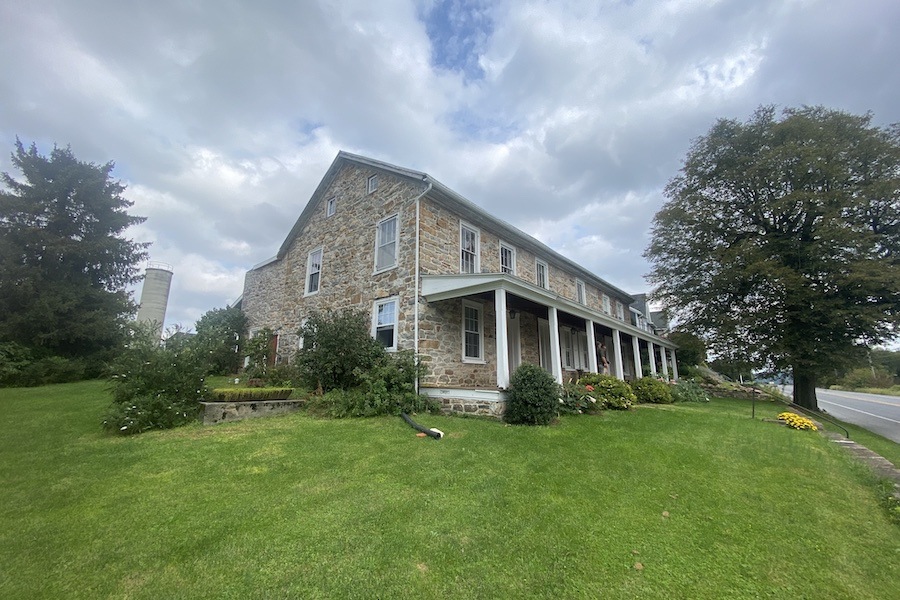 Not only the house you see here but the linden tree in front of it go back to a time before Blue Ball even existed. The history of the community and a President are all tied into this handsome stone farmhouse at 4452 Division Highway, East Earl, PA 17542 | This photo and others marked with asterisks: Sandy Smith; all others: Ben Sauders, Ben Sauders Visuals, via Bright MLS and Keller Williams Keystone Realty

Before Blue Ball, there was Wallacetown.

And the historic East Earl farmhouse for sale you see above was the very heart of Wallacetown. 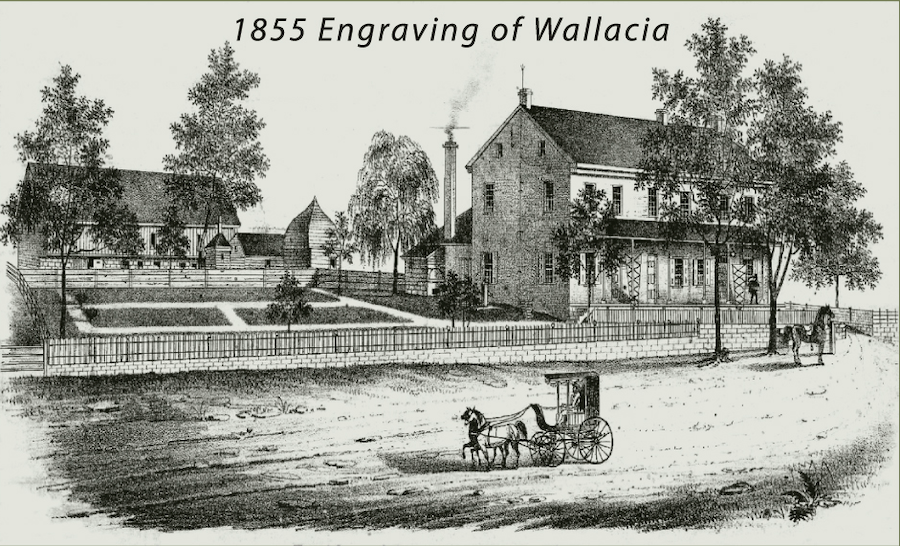 1855 engraving of Wallacia; the linden tree is at right

Known for many years as “Wallacia,” this house remained in the hands of the family that built it for 211 years, and only three others have owned it since.  Its current owner, artist and serial rehabber Kevin Franklin, bought it a little over a year ago. His wife, Susanna Alessandrini, is also an artist and a history buff, so you could say that becoming this house’s fourth owner was a matter of fate calling them.

Most of the work he did simply made it habitable again and ensured it would make it intact into a fourth century. “My friends all said, ‘It’s going to take you years to restore that place,’ and I’ve learned that the hard way,” he says.  As a result, this house is still a fixer-upper. But you might still have the chance to transform it into the historic landmark it deserves to be.

Why does it deserve to be a landmark? Because this house was not only instrumental in the growth of what became Blue Ball, it has strong connections to American history writ large. And in many of its unrehabbed parts, it tells the story of how prosperous Americans lived from the colonial era to the dawn of this century. 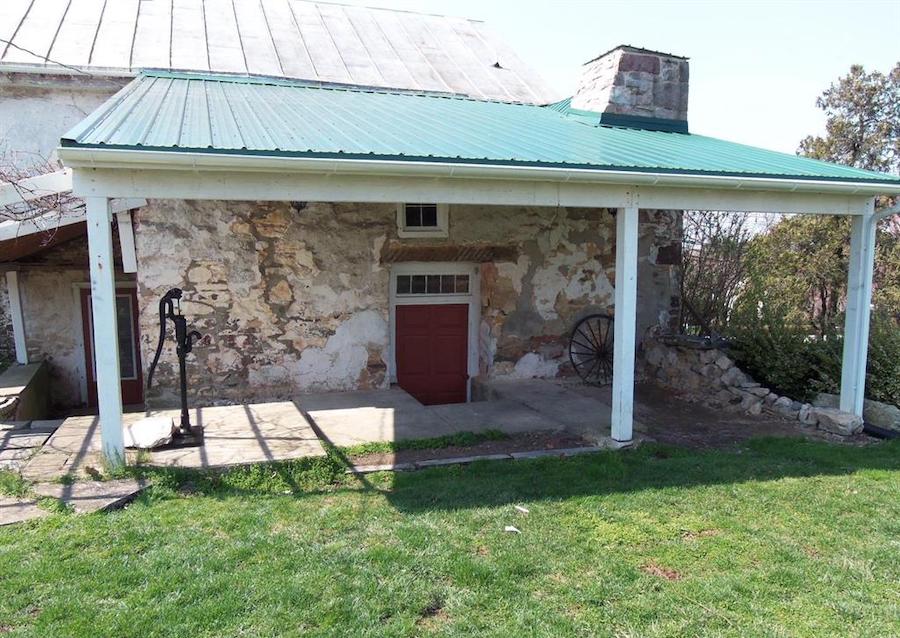 The oldest wing of the house dates to 1755 and is found in the back. A previous owner raised and replaced its roof, and Franklin stabilized its foundation. Franklin describes this wing that looks like a lean-to as a “stone ender.” This house type associated most closely with Rhode Island got its name because it has a large stone chimney on one end wall. 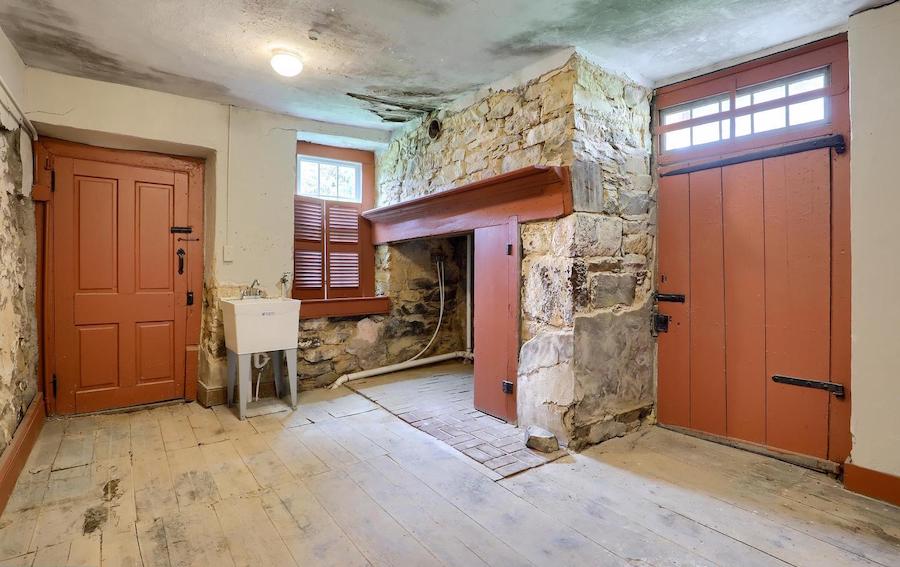 Its main floor is an authentic example of an 18th-century living room and kitchen. Food would be cooked over several fires in its large hearth fireplace. The first step towards restoring it would be simply to remove the utility sink; besides, there are other places in this house where you could put the laundry room. The water pipes in the hearth fireplace will also need to be relocated. 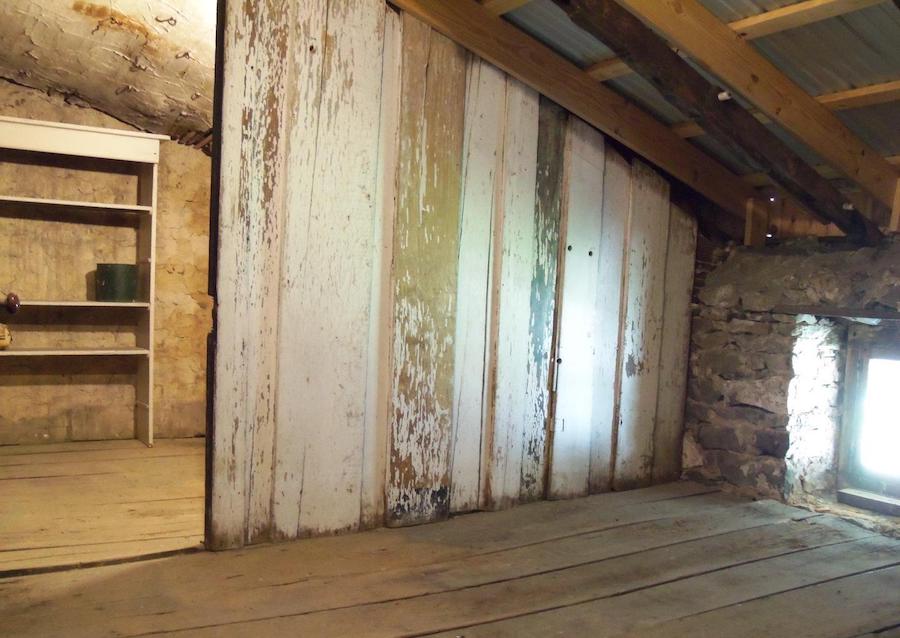 Its upstairs consists of two rooms in need of restoration. One served as sleeping quarters and the other was used to smoke meats.

Its basement served as both root cellar and as water source; Robert Wallace, the Scottish merchant who built it, put the house directly on top of a natural spring that flowed into one corner. 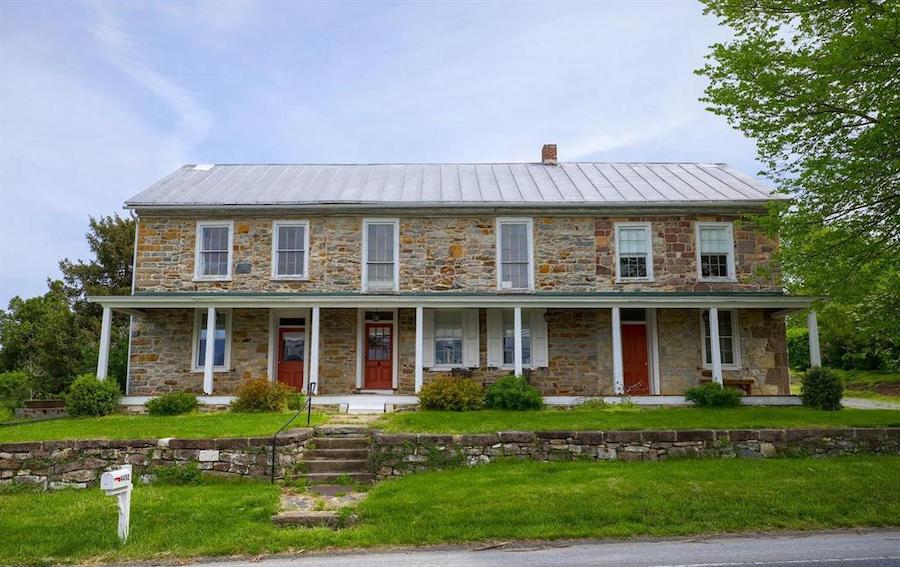 Wallace was the first merchant to set up shop in what became Blue Ball. (“There was absolutely nothing out here in 1755,” says Franklin.) Five years after building this wing of the house, he built what’s now its central section in 1761 and opened a general store. 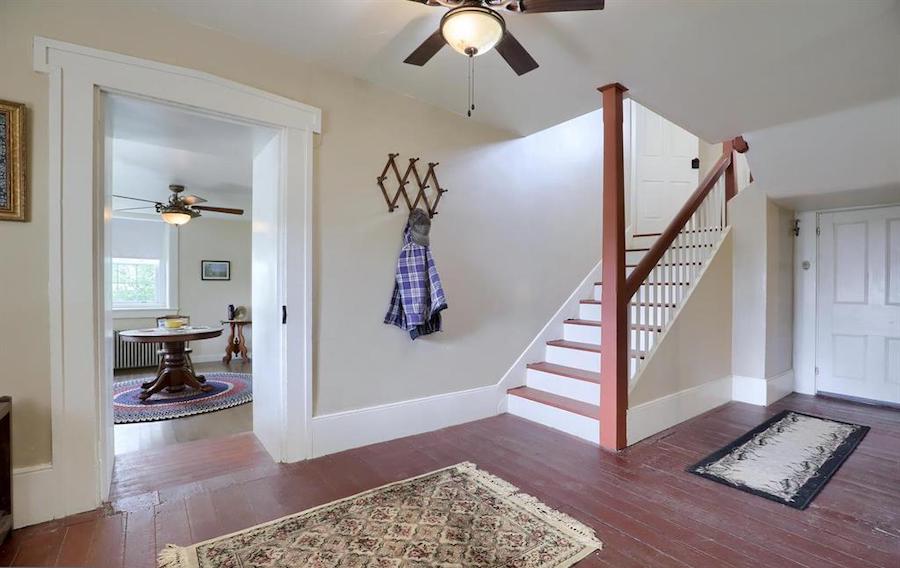 Foyer, 1761 wing; note thick doorway — it was originally the outer wall of this section 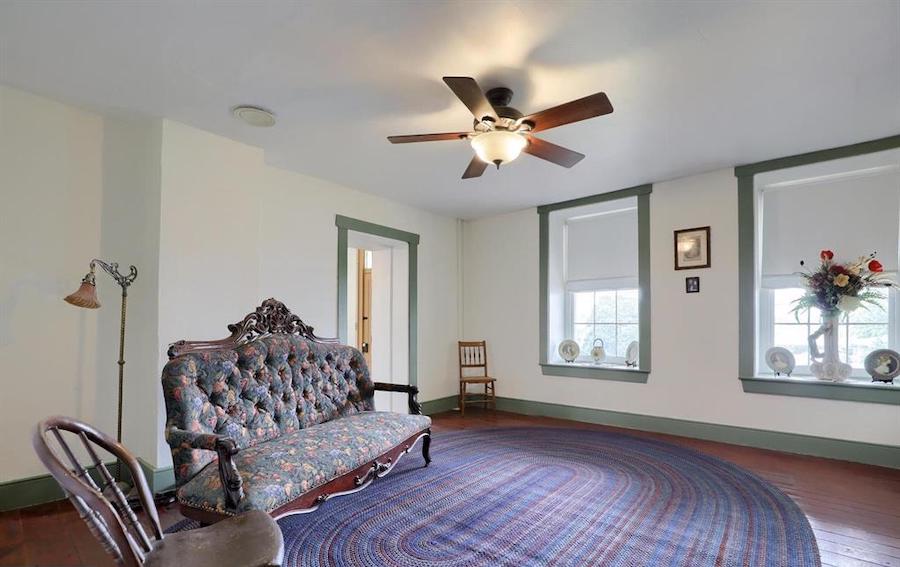 Today, this section of the house contains the foyer, living room, second-floor hallway and two of its five bedrooms. But it also contains the 18th-century version of a “gourmet kitchen” in its unfinished basement. 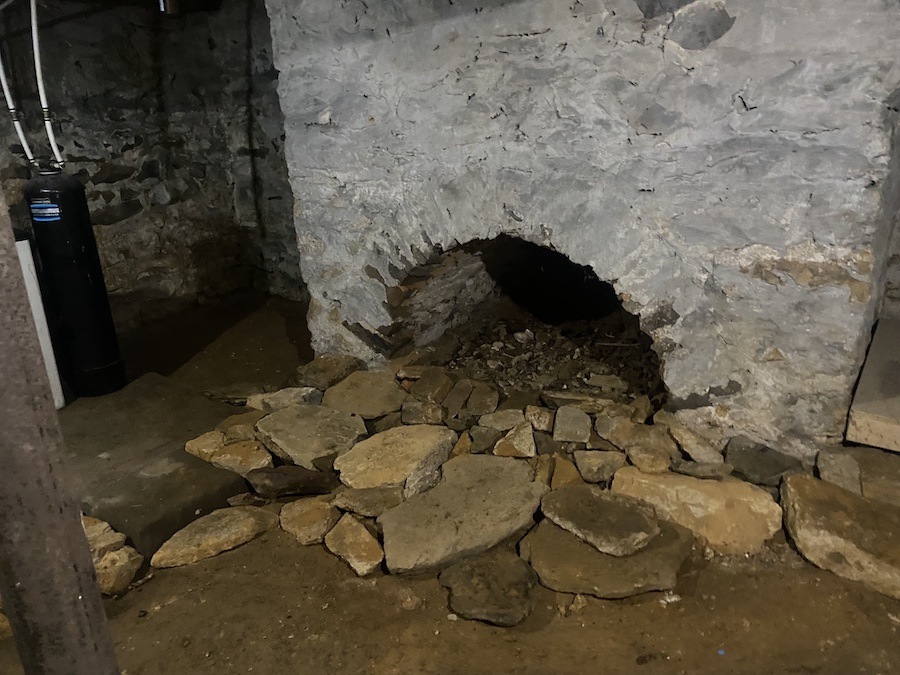 On one side of the room is an arched hearth; this was where the hottest fire was maintained for roasting meats. 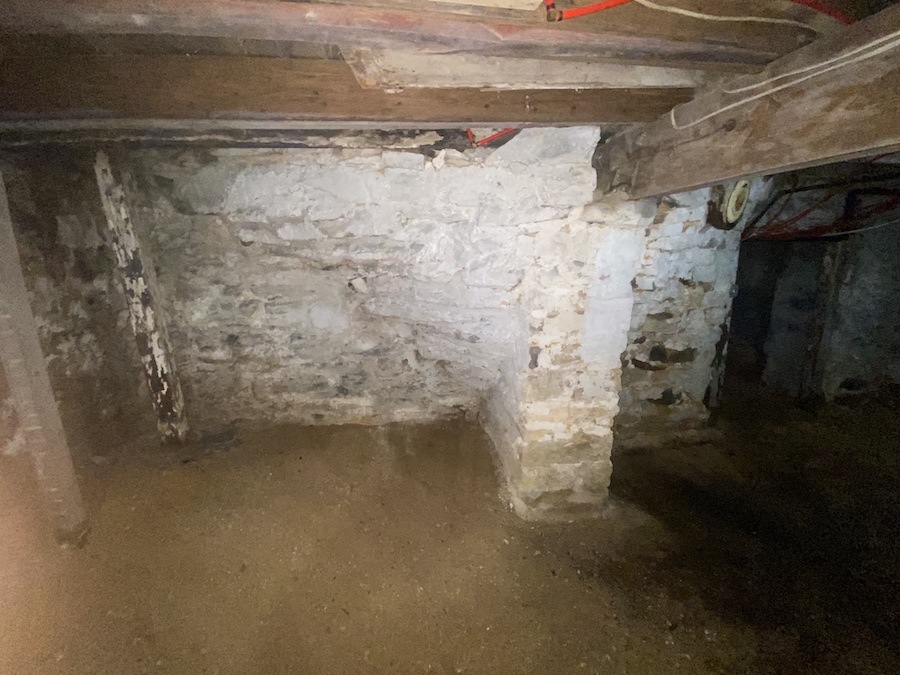 Needless to say, this kitchen has long since been rendered obsolete. Today’s kitchen comes later in this tour. 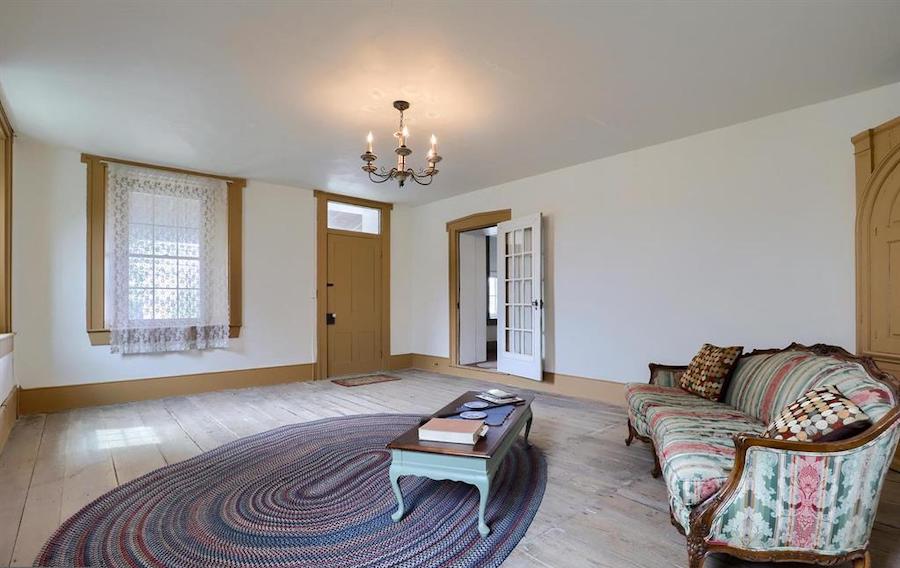 But before it comes the east wing of the house, built around 1775. Wallace expanded his general store into its first floor, storing merchandise in its basement. a long-gone trap door in the floor led to it. According to Franklin, the Wallaces’ store carried all sorts of luxury goods that would have been hard to come by in Lancaster and environs at the time. 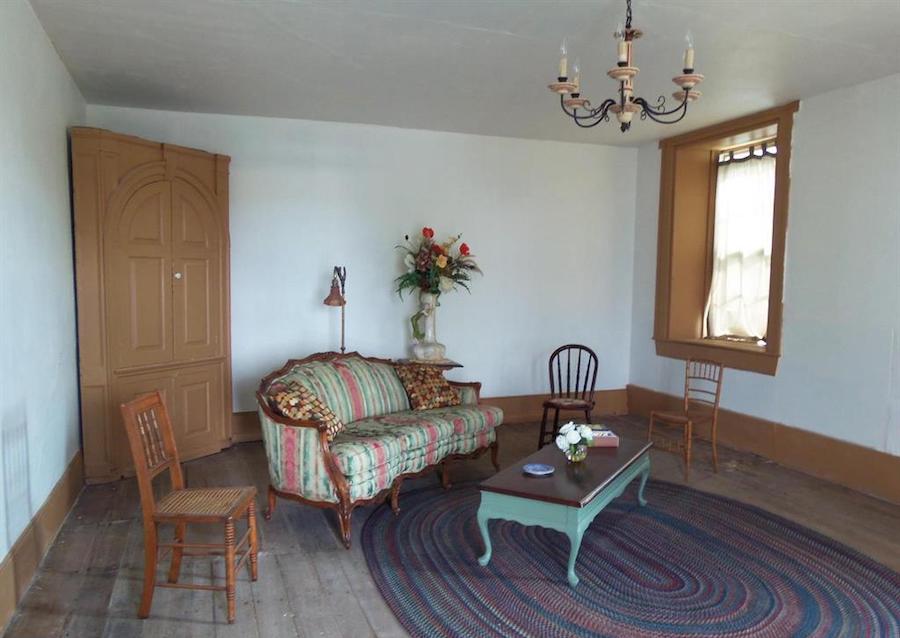 Entertainment room, 1775 wing; the cabinet in the corner had been in the current kitchen before it got upgraded

After the Wallaces got out of retail, it became office space, and it was here where the connection to the nation’s history got established.

Wallace’s grandson, William Smith Wallace, became a physician, obtaining his medical degree from Jefferson Medical College in Philadelphia, then returning to East Earl to practice medicine from the family homestead. He then relocated to Springfield, Illinois, where he set up a practice and ran a drugstore. It was in Springfield that he met Frances Todd, one of three sisters who all ended up settling in Springfield. In 1839, the year Wallace married Frances, her sister Mary arrived in town from Kentucky and took up residence with their other sister, Elizabeth, who had married a man named Minian Edwards.

Mary Todd met another Kentuckian named Abraham Lincoln in the Edwards home and married him in 1842 — on the recommendation of Wallace, who had become the Edwards’ physician. Thus did William Smith Wallace become Lincoln’s brother-in-law.

That, in turn, ended up giving Wallace a very important patient: Lincoln himself. Wallace accompanied Lincoln to Washington as his personal physician after he won the Presidency in 1860.

The connection between the Wallaces and the Todds, and thus Lincoln, was a strong one. A Wallace descendant, Marion Wallace Reninger, wrote in 1953 about an 1859 letter in her possession from Lincoln to William’s brother Edward, also a physician, who got his degree at Penn before settling in Reading and helping establish the Reading Hospital. The letter, which outlined Lincoln’s position on tariffs, would prove influential in securing the support of Pennsylvania’s Republican businessmen and leaders for Lincoln’s candidacy for the Republican nomination in 1860.

Given that the Wallace family still called “Wallacia” home in both 1859 and 1953, Franklin says, “Just considering the closeness of the two families, Abraham had to be in this house at some point.”

And he quite likely spent some time in the room that had housed the Wallaces’ general store. 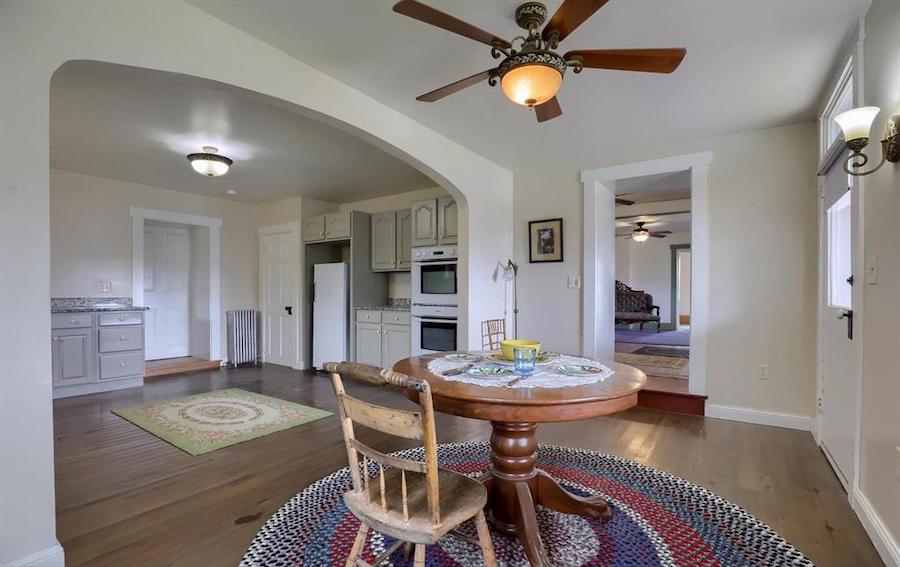 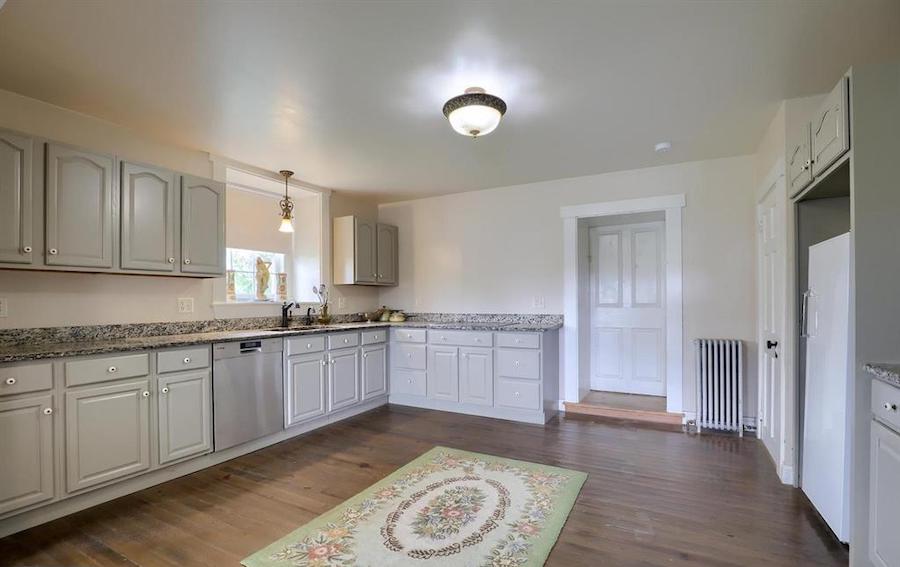 The upgraded kitchen Martin installed has granite countertops, farmhouse cabinetry and Bosch appliances. It won’t need much work at all, though you may want to put a bigger refrigerator in. A cupboard that had been in this kitchen now resides in the first-floor living room.

The five bedrooms on the second floor won’t need major work either. Most of the work here should be cosmetic. 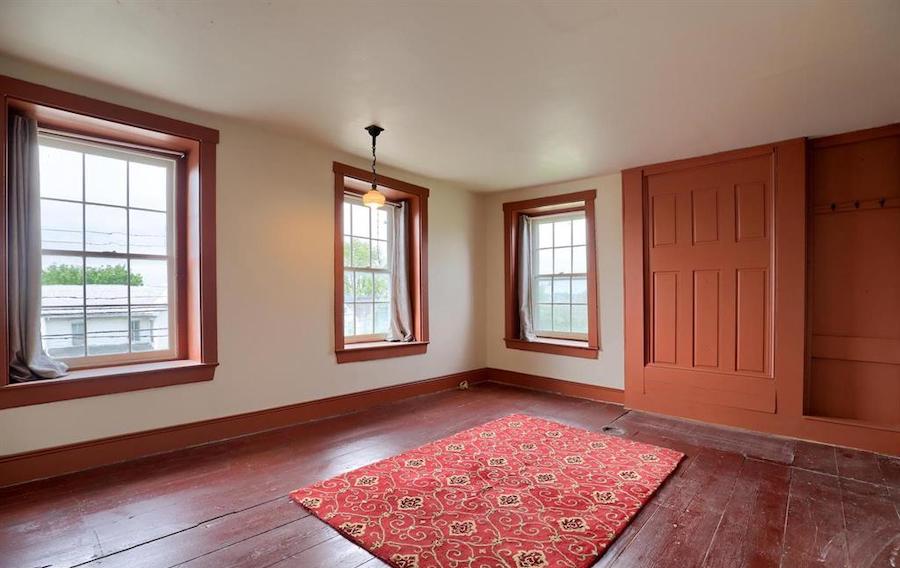 Franklin recycled a wood panel from a closet in another room to cover over the fireplace vent that had been exposed in the primary bedroom, giving it an interesting accent feature. 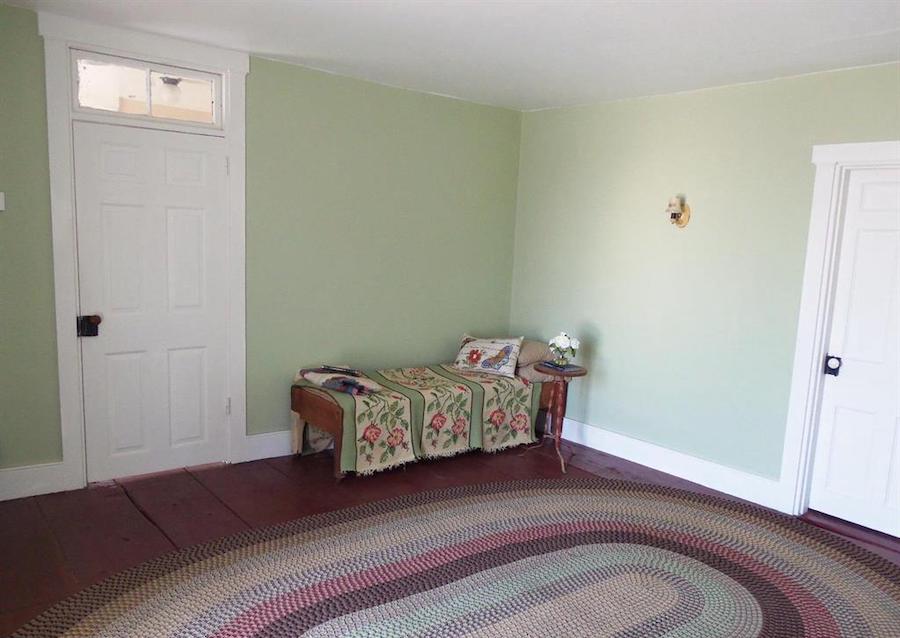 The closets, cabinets and door hardware on this floor and throughout the house are original. The day bed in the bedroom above probably also dates from at least the 19th century. 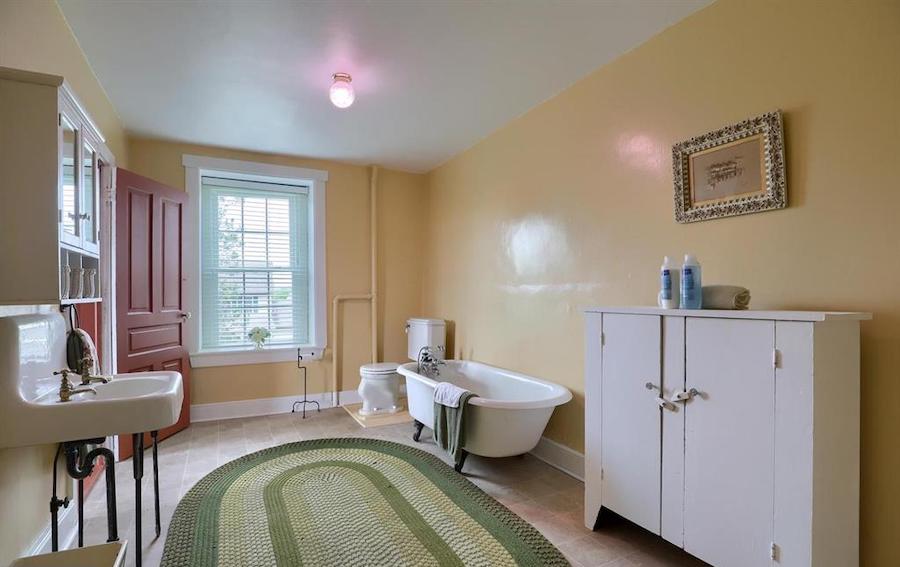 The fixtures in its one bathroom probably aren’t original, but they’re definitely vintage. The demands of modern living might lead the buyer to add at least one more bathroom to the mix; he recommends the current fifth bedroom, a small room accessed from two of the bedrooms in the west wing. 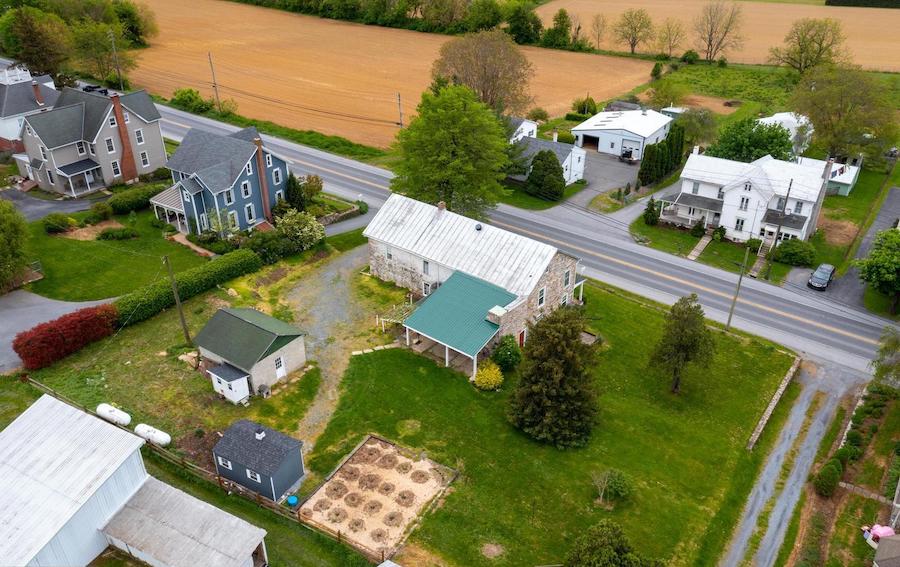 Aerial view of house and lot

In the backyard are two outbuildings, an older garage and a newer storage shed. You’ll also find a garden plot.

As of now, the only climate control this house has comes from hot-water radiators. But its thick stone walls — three feet thick in places — actually provide insulation that helps keep the house cool, enabling its ceiling fans to make it even cooler (“All I have to do is open two windows to run my fans on low and keep it nice and cool,” Franklin says about the upstairs). Still, one might want to consider adding a modern climate-control system to this house.

Much of the work Franklin performed on the house was structural, replacing rotted support beams and repairing some floorboards after removing a wall-to-wall carpet that he estimates had been in place for about 150 years.

That structural work, however, leaves this historic East Earl farmhouse for sale in prime condition for transformation into a stellar historic residence. Or, given its location in Blue Ball, it could become a first-rate B&B. It’s a stone’s throw from the Shady Maple smorgasbord and farm market and not all that far from Lancaster proper.

Even the road this house sits on is historic: Division Highway was originally an Iroquois trail that led to what became Philadelphia — it connects to State Route 23 a little to the east of here. It was one of two Iroquois trails whose paths crossed just west of here, and the Blue Ball Inn, which gave this community its name, arose at that intersection. It heads west from here to New Holland, where it becomes New Holland Avenue headed into Lancaster.

As Division Highway/New Holland Avenue is in essence a linear town, you can find shops, bars and restaurants dotting it all the way from here to Lancaster. Many of the houses along it have farmland just behind their backyards.

It’s a shame the owner doesn’t come with the house, because he pointed out all sorts of interesting historic details about its construction, the Wallaces and the surrounding area when I toured it last week. Clearly, its incomplete restoration has been a labor of love, and I’ll bet that if you ask him, Franklin will give you the full historic treatment too — and then you can pass it on to your friends, family and visitors.

OTHER STUFF: This house is under contract, but the seller is accepting backup offers.