On the Market in the Poconos: Norman-Inspired Estate in Mt. Pocono

”Montanesca House” was recycled from the remains of a long-gone grand hotel in 1940. A 2008 rebuild has turned it into a luxurious grand lodge surrounded by prime hunting land. 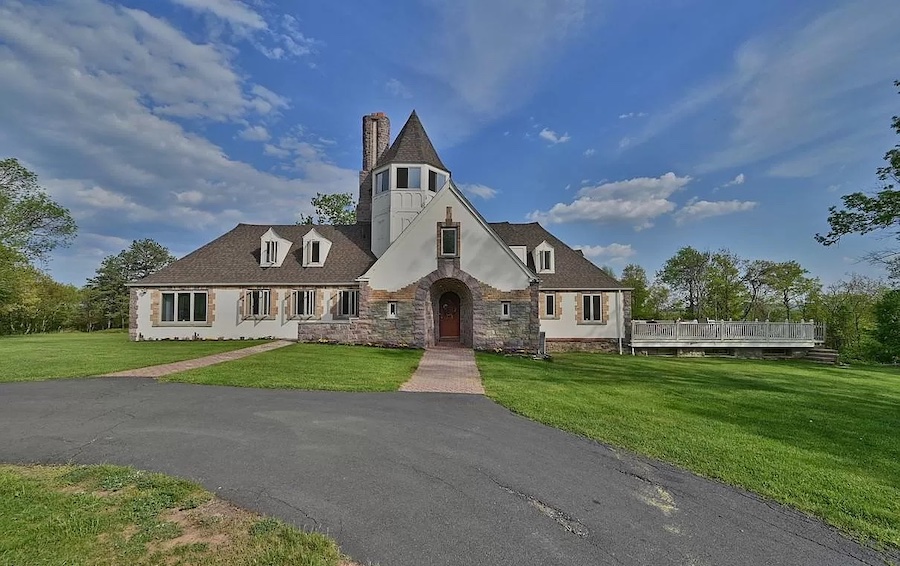 The couple who bought this Norman-inspired house in 2008 channeled the sumptuous spirit of the Montanesco Hotel, which occupied this site, when they restored it. You will find it at 133 Montanesco Rd., Mt. Pocono, Pa. 18344 | Pocono Mountains Association of Realtors MLS images via MORE Modern Real Estate except where noted

Our latest Poconos house for sale is another remnant of a long-gone grand resort.

In this case, this Norman chateau just south of Mt. Pocono represents what’s left of the early-20th-century resort hotel that rivaled Pocono Manor for grandeur.

Actually, if the Pocono Manor Hotel was grand, the Montanesca, located just to Pocono Manor’s east, was even grander.

When it opened in June of 1901, the hotel was the largest in the Poconos. Its 125 rooms had gas and electric lights and steam heat, and an elevator served all its floors. Among the famous guests who stayed there during its brief existence was Admiral George Dewey, hero of the Battle of Manila in the Spanish-American War. 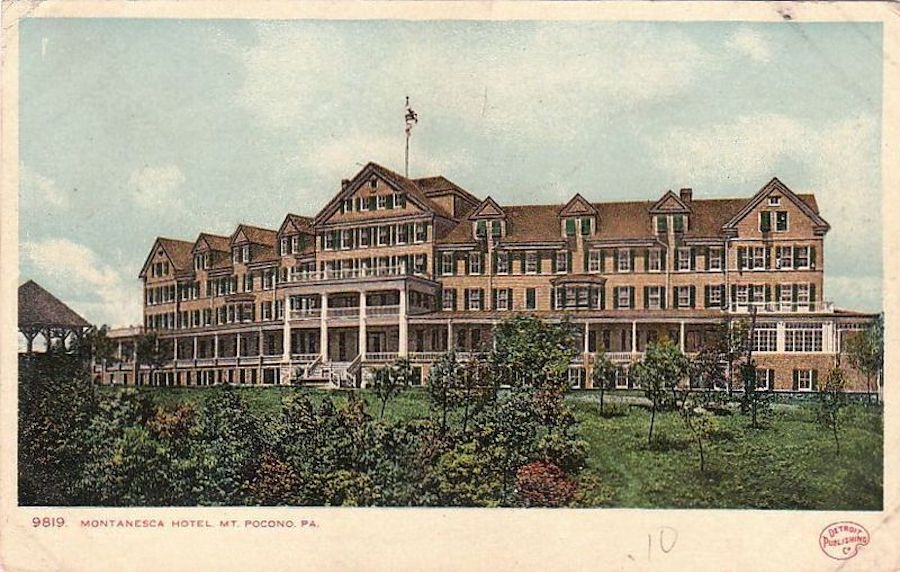 The Montanesca’s existence was brief because the hotel burned to the ground in a spectacular fire in May, 1911, two weeks prior to its official opening for the season. And the resort’s run of bad luck didn’t end with that fire. “We believe the Montanesca staff boarding house was converted into Montanesca House, which housed guests that summer until it also burned down in December of 1911 by incendiaries,” writes Christina Schauer, owner of this Mt. Pocono Norman manor house for sale.

It too is called “Montanesca House,” but almost three decades came between the disappearance of the first one and the appearance of this one. I.D. Ivison, who built and owned the hotel, announced after it burned that he would build a new, bigger, fireproof structure, but those plans never came to fruition. After the staff quarters-turned-hotel burned too, Ivison used the proceeds from the hotel’s insurance policy to pay off its $100,000 mortgage and left the Poconos to take over a hotel in Chambersburg.

The land on which the hotel sat was sold back to its original owner, Elwood Bonsall, in 1913 after Ivison had fallen three years behind on its $1,000 annual ground rent. Thomas P. Howlett, founder of Philadelphia’s first commercial radio station and himself the owner of a group of Poconos resort hotels, bought the land in the 1930s and built today’s Montanesca House on it in 1940.

Stone and other materials from the rubble of the old Montanesca Hotel found their way into this house. Those remain part of its walls today, but in many ways, it only barely resembles that 1940 manor thanks to the top-to-bottom rebuild its current owners gave it in 2008. 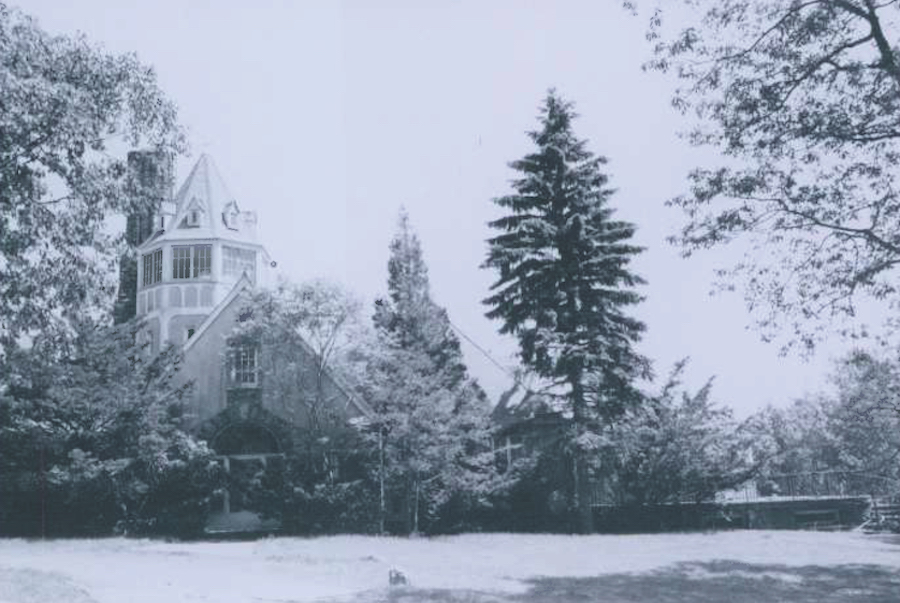 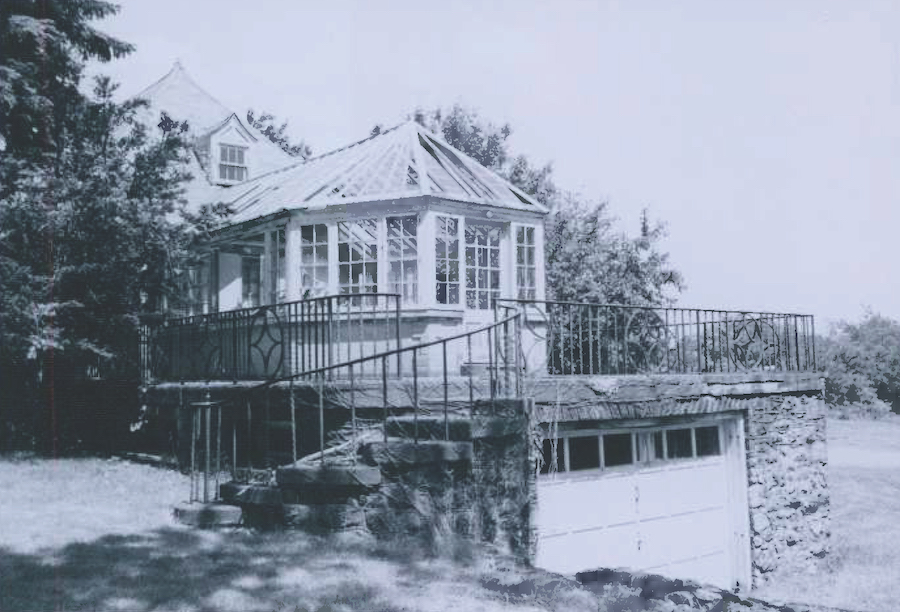 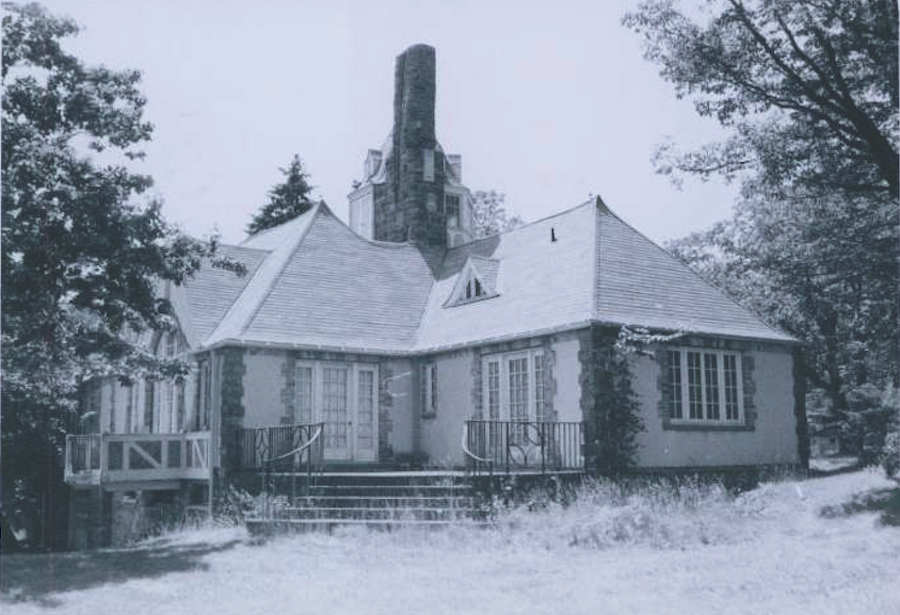 You can see from these photos of the house some time after it had been abandoned that the current owners made major repairs to it. A full deck was added to the back of the house, connecting the two terraces on either side. A conservatory on the bedroom wing was removed. Modern windows replaced the original ones. And on the inside, it got a total modernization that outfitted it for the way we live, entertain and work today. 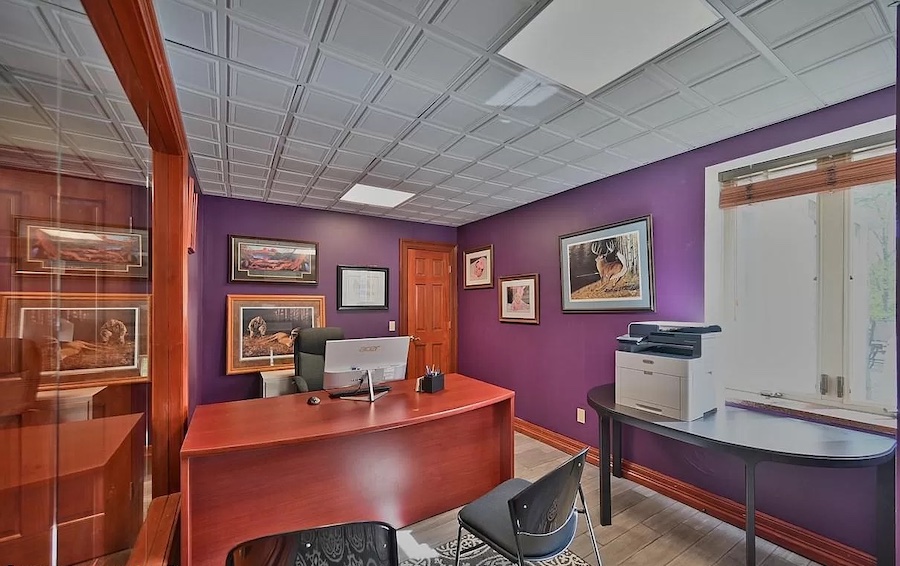 Just to the right of its foyer, you will find a home office with a window looking out on that foyer. 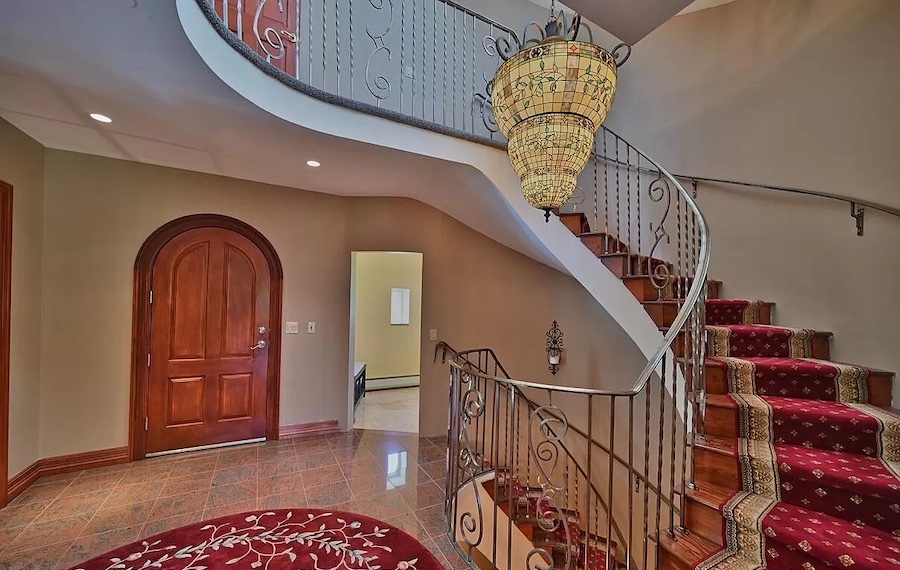 Across from it, a spiral staircase rises from the basement below to the top of the observation tower. 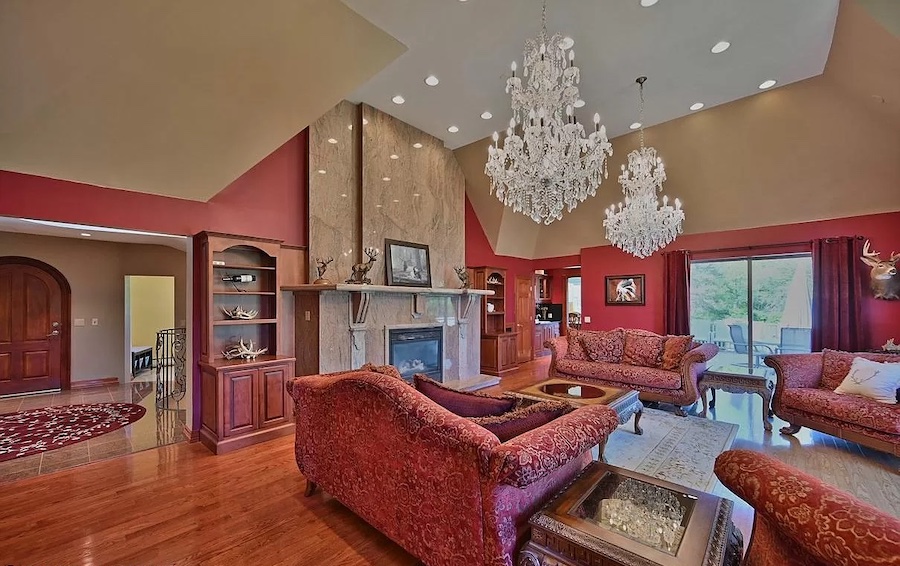 Beyond the foyer lies the soaring living room, bedecked with two crystal chandeliers and a marble fireplace. 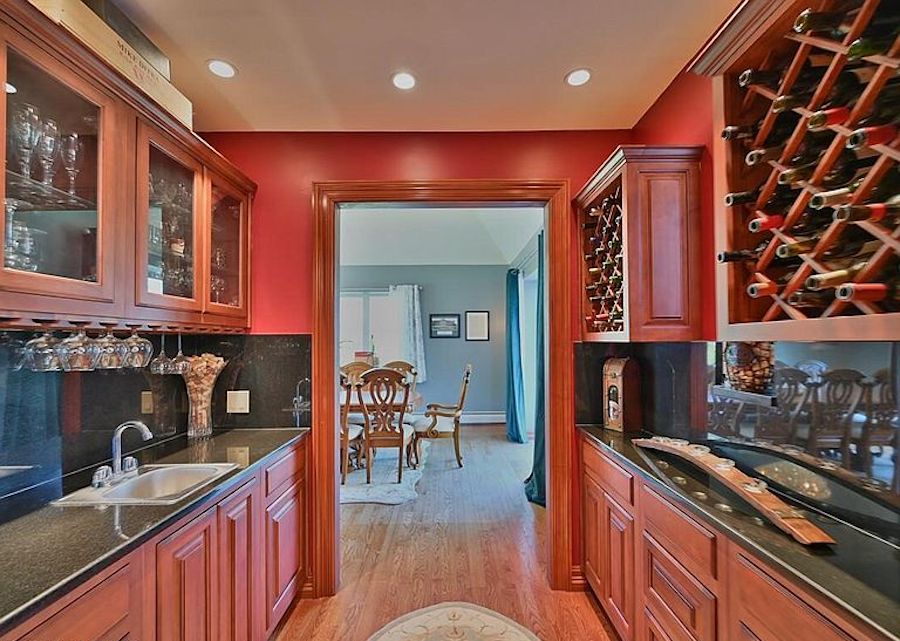 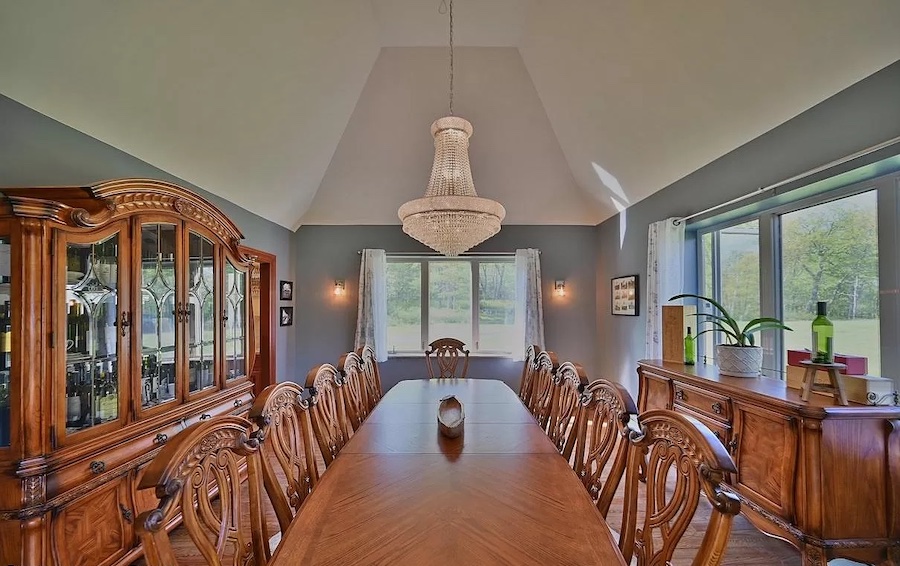 A wine room and bar connect it to the dining room at one end of the main floor. 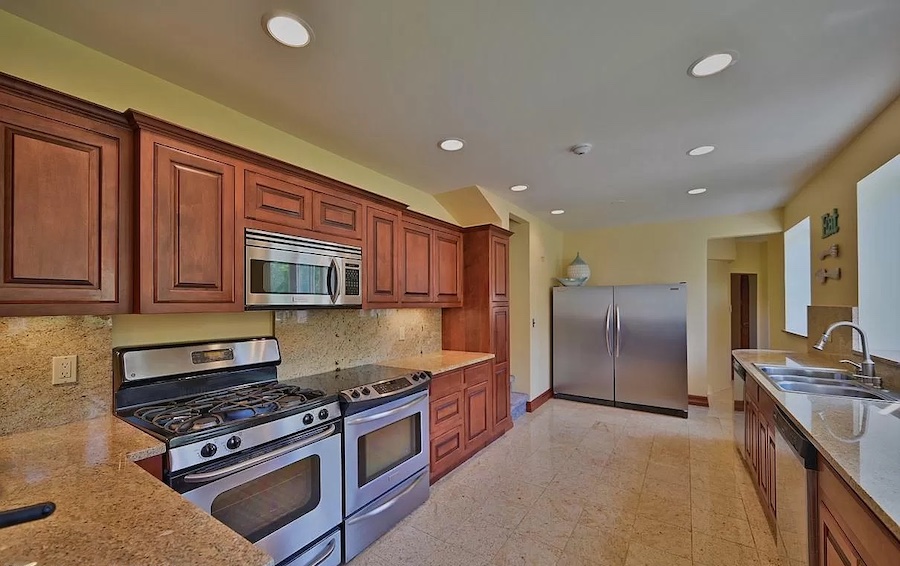 Between it and the foyer is a kitchen equipped for preparing large meals. It has two ranges, an extra-large refrigerator-freezer, two dishwashers and a three-basin sink, not to mention plenty of granite-topped counters. 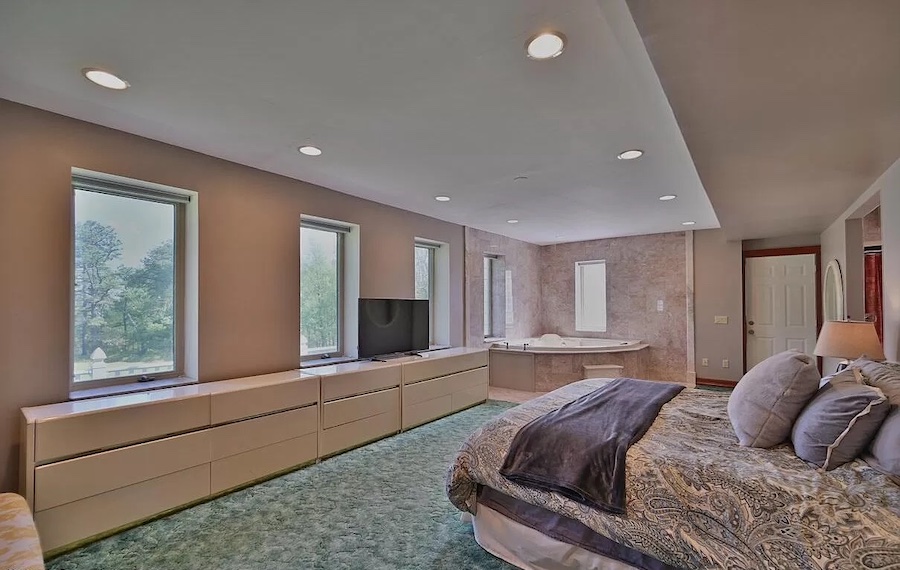 The makeover also outfitted it for one-floor living with a main-floor primary suite. Its bedroom has a jetted tub where you can relax your stresses away. 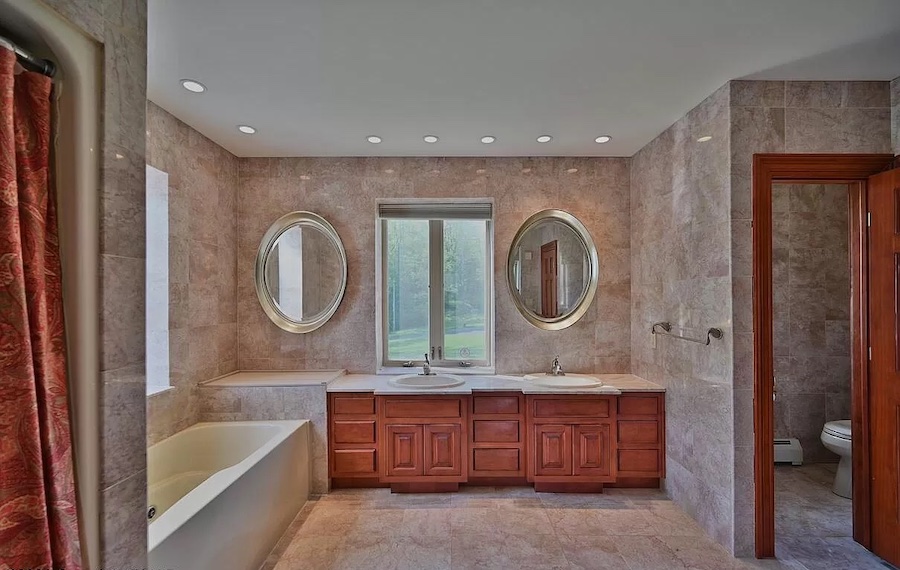 Its bathroom also has a soaking tub, a shower stall and dual vanities. 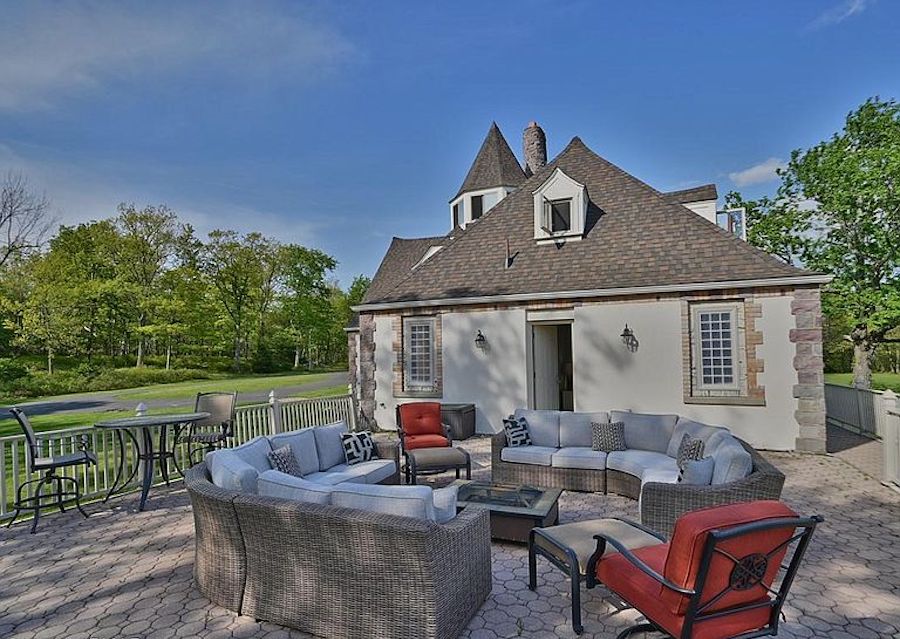 And beyond the Jacuzzi lies a door that opens onto a large private terrace over the garage. But then again, every outdoor space here is private, given that this house sits on nearly 57 acres of land that’s protected as a forest preserve by an Act 319 conservation easement.

The second floor contains three more bedrooms and a hall bath with its own jetted tub. A second staircase leads from the kitchen to a second-floor guest suite. My guess is that when this house was built, this was where the domestic help lived. 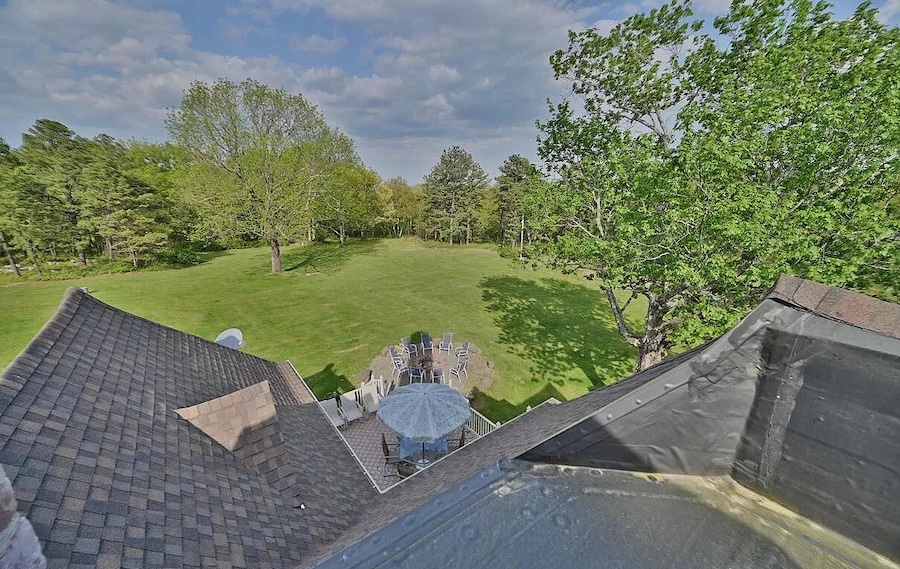 Above it you will find the observation tower and a deck that looks out over the grounds. 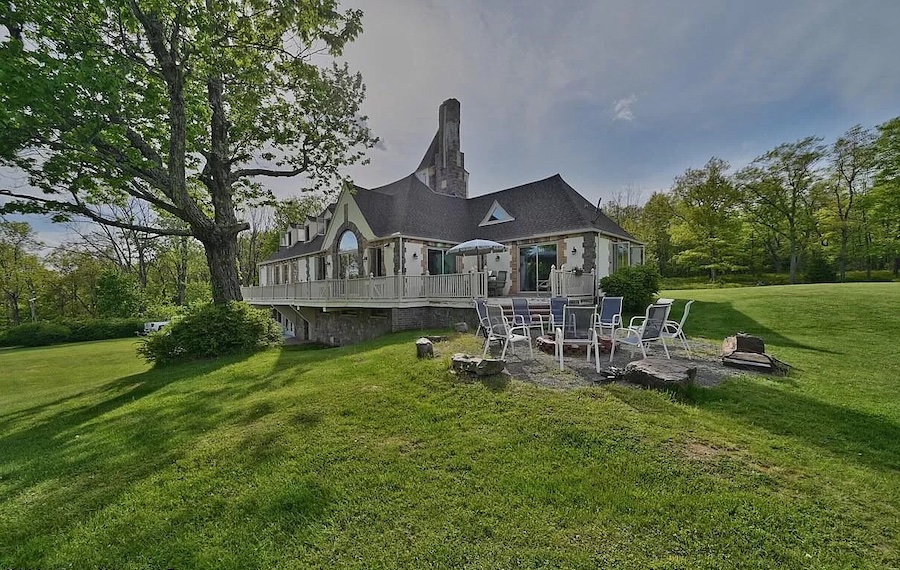 You can offer indoor and outdoor dining via the deck behind the dining room, and afterwards, your guests can gather around the fire pit beyond it. 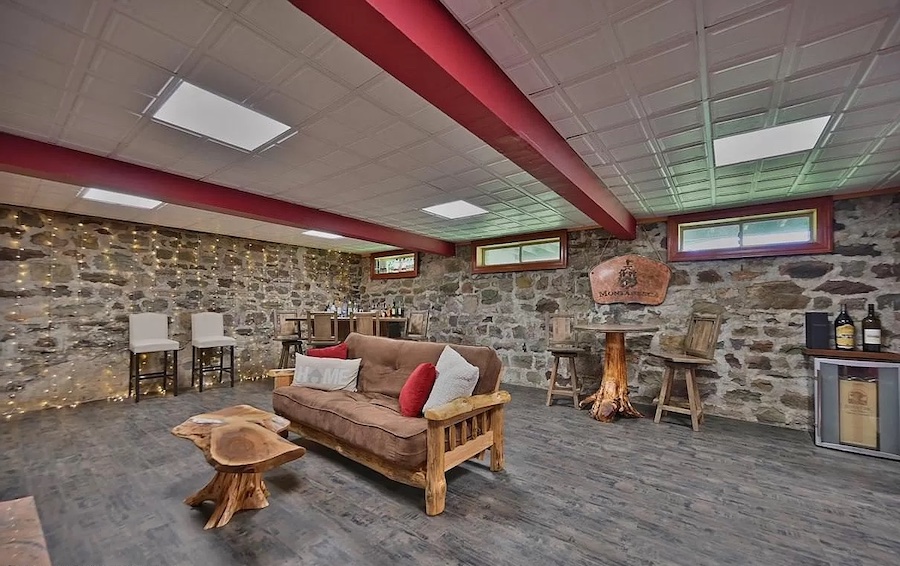 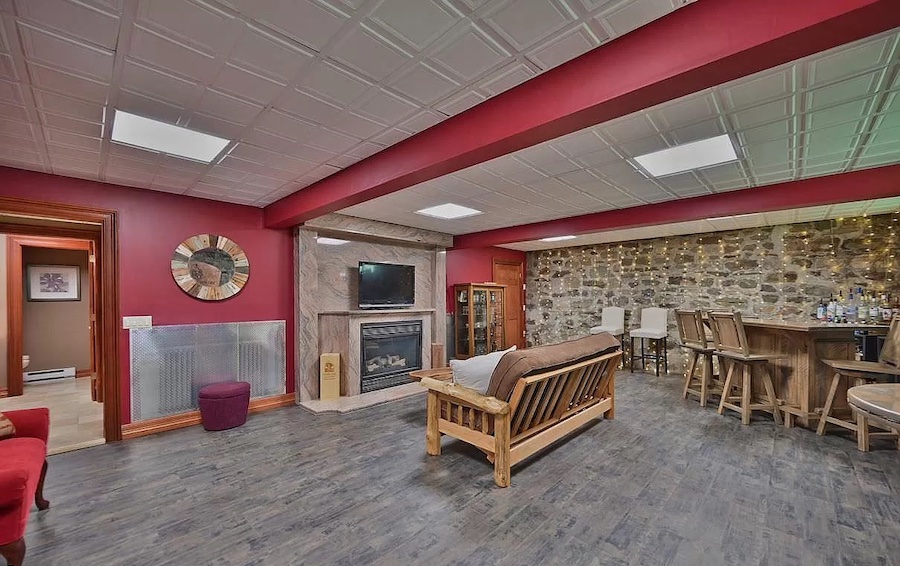 Or you could invite them all downstairs to the family room pub in your basement. It contains the house’s second fireplace, a bar and a plaque with the crest from the hotel. Schauer fashioned it based on tableware and other artifacts from the hotel she found on the grounds. 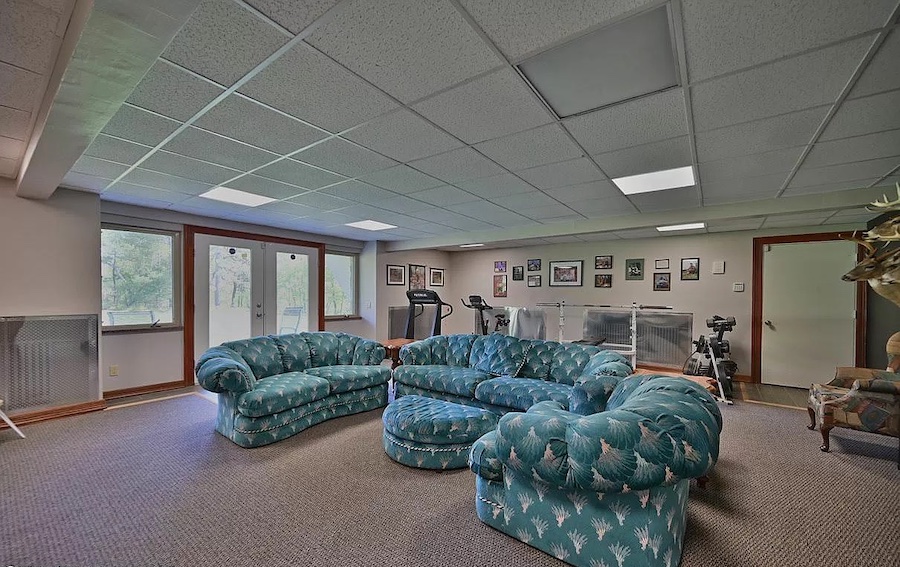 Also in the basement are a rec room with gym, a home theater and a one-car garage.

If you enjoy hunting, you will enojoy living in this Mt. Pocono Norman manor house for sale, as the grounds are kept stocked with food to attract animals.

And even though it’s a secluded private retreat, it’s close to several other Poconos resorts, including Kalahari and Pocono Manor itself. And it’s easy to get to from Philadelphia: it’s close to the I-80/I-380 junction.