How Concrete Cowboy Got a Horse Into a Philly Rowhouse

They could have just walked him in like the Fletcher Street rider who had a horse in his house in real life. But they had a heavier load to bear, so they turned to local developer Ryan Spak to help them shoulder it. 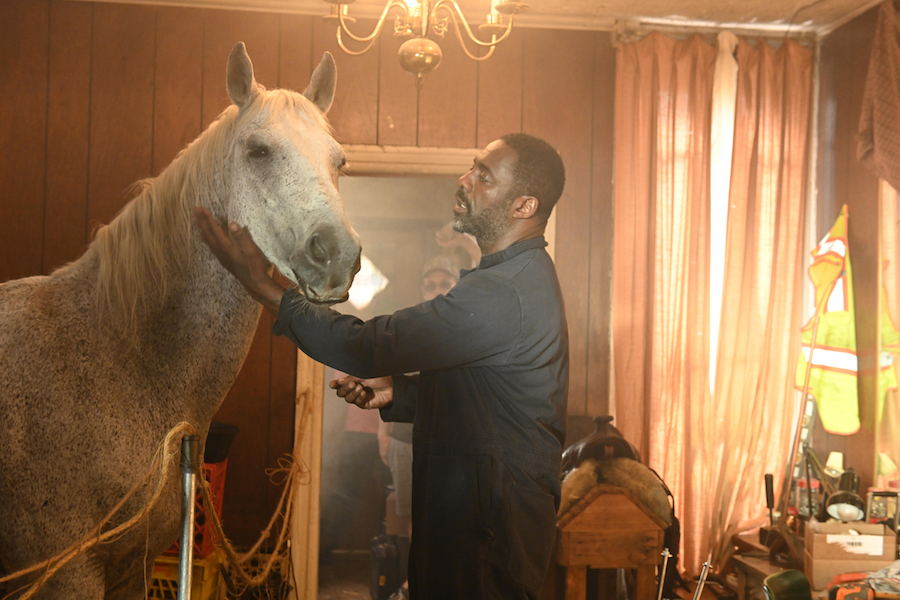 Idris Elba with the horse he stables in the living room of his home in the new film Concrete Cowboy. Developer Ryan Spak found the house on North Myrtlewood Street that served as the home in the film. | Photos courtesy Neighborhood Film Company

The word “cowboy” conjures up images of the open spaces of the old Wild West: of campfires and cattle drives, of lone wolves who ride into dusty towns to rid them of bad guys. Usually, these lone wolves are white.

Quite likely, it doesn’t conjure up images of the narrow streets of gritty Philly: of concrete, asphalt and brick, of communities of men and women whose love of horses brings them together to save, nurture and ride them through those streets. And with precious few exceptions, the images don’t feature Black horsemen.

Yet the Black urban cowboys of North, West and Southwest Philadelphia have been a fixture of local culture for more than a century, and the new Netflix film Concrete Cowboy tells the story of some of them — in particular, the band of brothers and sisters who rescue, stable and ride horses on Fletcher Street in Strawberry Mansion.

And to tell that story, the production crew at Neighborhood Film Company, the outfit that made the film, needed to find a rowhouse they could put a horse in.

“In the story, the character of Harp, who is played by Idris Elba, lives in North Philly and keeps a horse in his living room in a row home, which, based on stories from the real Fletcher Street cowboys, is something that has happened in the past,” says Neighborhood Film Company founder Ricky Staub, the film’s director and co-writer.

Staub notes that both in the film and in real life, the riders of Fletcher Street in Strawberry Mansion go to great lengths to save and care for their horses. And because proper stable space is scarce, and redevelopment across the city is making it even scarcer, that means that the riders often found creative ways to keep their horses housed and fed. Staub also related a tale of one rider who kept a pony “stabled” in a van he owned.

“These animals are like loved ones to these folks,” he says. ”So they’re not going to put them out in the street, homeless.”

And so it is that the film features a lead character who stables a horse in his house. “But in our case, since we’re making a film, we had to make sure everything was safe.”

And this is where local developer and real estate broker Ryan Spak comes in.

Spak, who heads the social-impact development firm The Spak Group, had met Staub several years ago when the two worked on a small project of Spak’s together. “I didn’t even really know what Ricky did for a living,” he says. But then, three years ago, “I got this random email from him asking me, ‘What do you know about these addresses?’” The email also contained information about a book — “it was this amazing, gorgeous picture book that told this story about Black cowboys and urban riders in Philadelphia.”

That book, Ghetto Cowboy by G. Neri, tells a story of a young boy who is sent to live with his estranged father in Philadelphia after getting expelled from his school in Detroit. In the book, the boy learns about the hidden history of Black cowboys, forges bond with his father and the other cowboys, and, as Neri puts it, learns “to stand up for what’s right — the Cowboy Way.” Ghetto Cowboy, which gets its storyline from the stories of the real urban cowboys of Strawberry Mansion and Brooklyn, also forms the basis of the story told in Concrete Cowboy.

Spak wasn’t sure what to make of Staub’s email at first. “I remember writing him back and thinking to myself, ‘I have no idea what this is about, I have no idea what he needs, but sure, I’m in.’” And thus began his service as the film’s location and real estate consultant.

What Staub knew was that he wanted to shoot the film where the events depicted in it actually occurred — on and around Fletcher Street. And he knew that he had a short window of time in which to film it, for in a case of life imitating art imitating life, the Philadelphia Housing Authority was preparing to build an affordable-housing project on land that the Fletcher Street riders had used as stables. (In the book and the film, the city threatens to seize the riders’ stables and shut them down.) 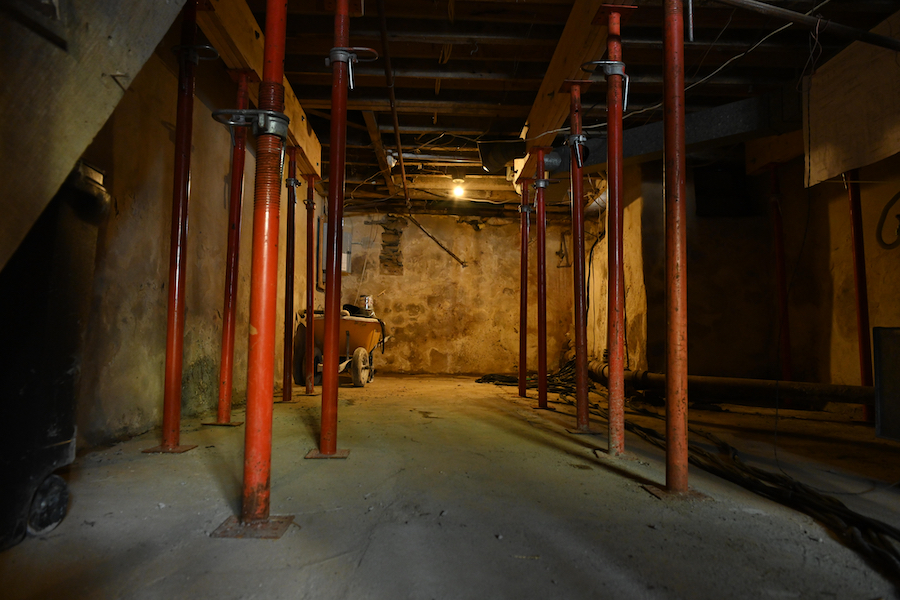 To ensure the house could support the weight of the horse, 15 people, hundreds of pounds of equipment and the furniture, new footers and extra bracing had to be installed in the house’s basement

After getting everyone involved in that matter to agree on a schedule — a process that took two and a half years — Spak then turned his attention to the issues the production crew were having finding that right rowhouse.

Spak, who is also a licensed real estate broker, searched the Bright MLS listings for houses that met the geographic and appearance requirements. The aim was to lease a vacant house for sale from its owner for the time needed to shoot scenes in it, then clean things up and hand the house back over to its owner.

Spak found several properties that fit the criteria and took Staub, co-writer Dan Walser and the production crew on a real estate tour. “I think we saw six or seven houses,” he recalls. “And we walked into this particular house, and I don’t think they even got past the living room. And [they] realized that this was what they had envisioned when Dan and Ricky wrote the script.

“And we were all standing in the living room and dining room of this tiny little rowhouse, and someone from the lighting crew, or someone from the production staff was like, ‘Yeah, we’ll put the horse over here,’ and I was standing on the steps, and I said, ‘I’m sorry, excuse me, you want to put a horse in this house?’ 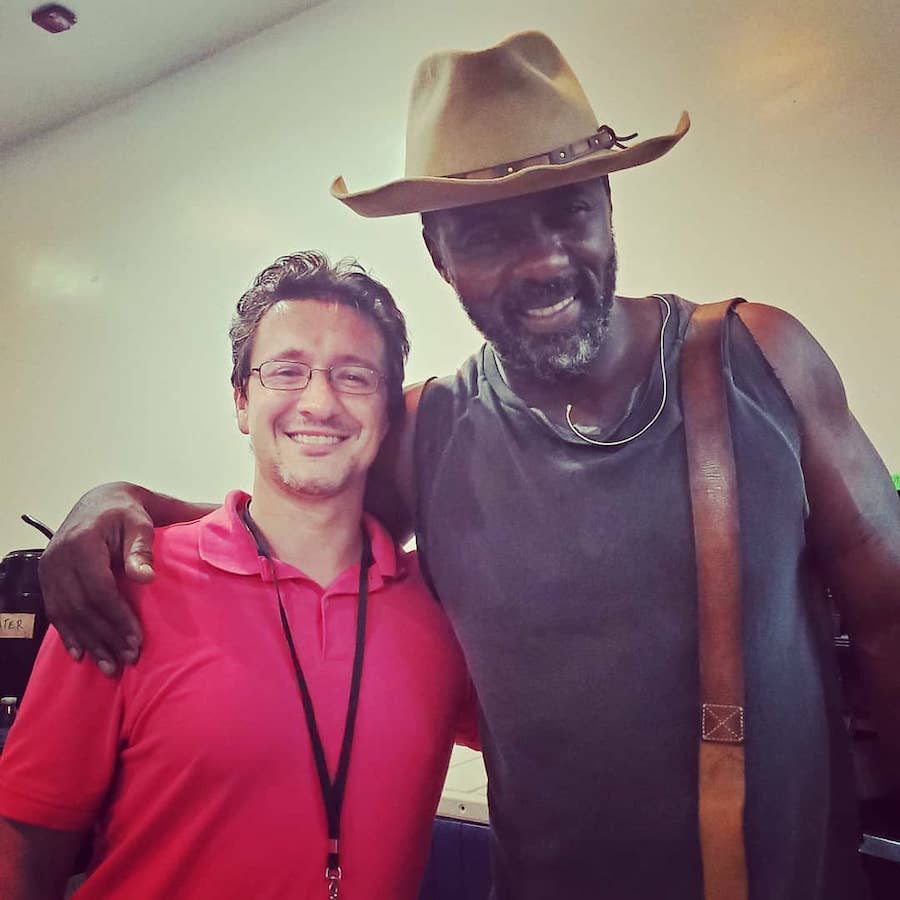 “And we went down into the basement, through the cobwebs of this vacant house. And we had two and a half weeks before filming started, and it became very apparent that if we were going to do this, we had to build a temporary shoring system from the slab through to the joist systems of the first floor.

“And in a two-week timeframe, we got engineering drawings, we poured new footers in the basement. My development team and I basically rebuilt the basement structure of this house to hold a horse, the equipment, the actors, the director and the cinematographer. And it was really pretty spectacular.” 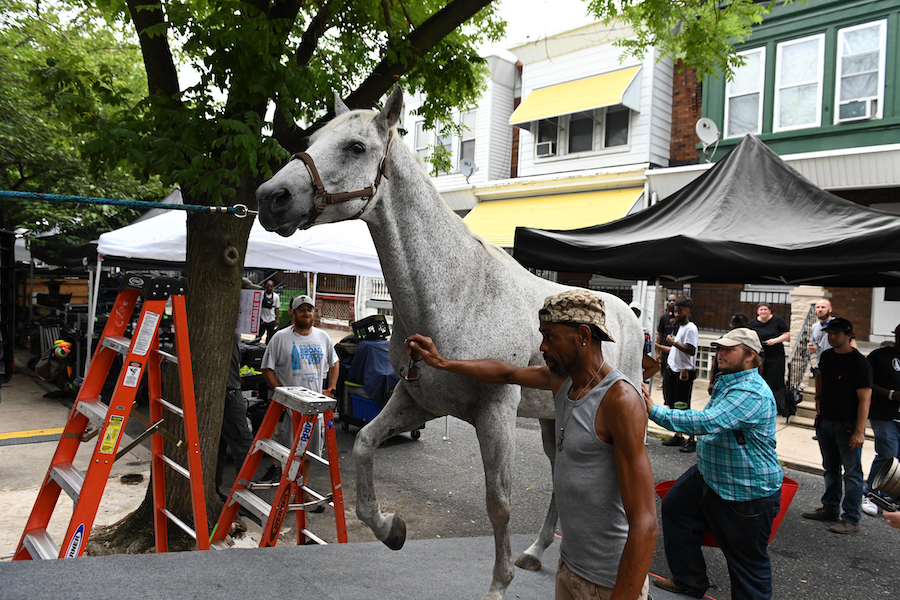 Believe it or not, getting the horse inside the house they found on North Myrtlewood Street was no problem at all. “The horse actually does fit through an ordinary door,” says Staub. “We worked with the Horse Wranglers, which is a company that provided the trained Hollywood horses. And we built a ramp at the right grade, according to their specifications, that went up the stoop and into the house.”

In real life, the owner may not have had to do a thing other than lead a 3,000-pound horse into the house. For the film, the bracing was needed to prevent injury or damage not only to the horse but also to 10 to 15 people, including the actors and the production crew, and to several hundred pounds of stage lights in addition to the furniture.

If all this sounds claustrophobic, that’s exactly the way Staub and Wagner wanted it. “It was a typical Philadelphia rowhouse — two stories, 950 square feet,” says Spak. “Which is why it was so funny when the team wanted to put a horse in it, but their vision made for an amazing scene” — one that also made it into the film’s trailer.

Staub says that he wanted to make the film not only to tell the amazing stories of Philly’s Black cowboys but also to help them continue to pursue their passion. He first learned about the Fletcher Street riding community from Eric Miller, the son of a Fletcher Street legend who purchased his first horse shortly after returning to the community from prison. The short film he made about Miller only increased his interest in learning more, and when he found out that the city was threatening to take their stables away, he decided the time had come to make a full-length feature film, his first. 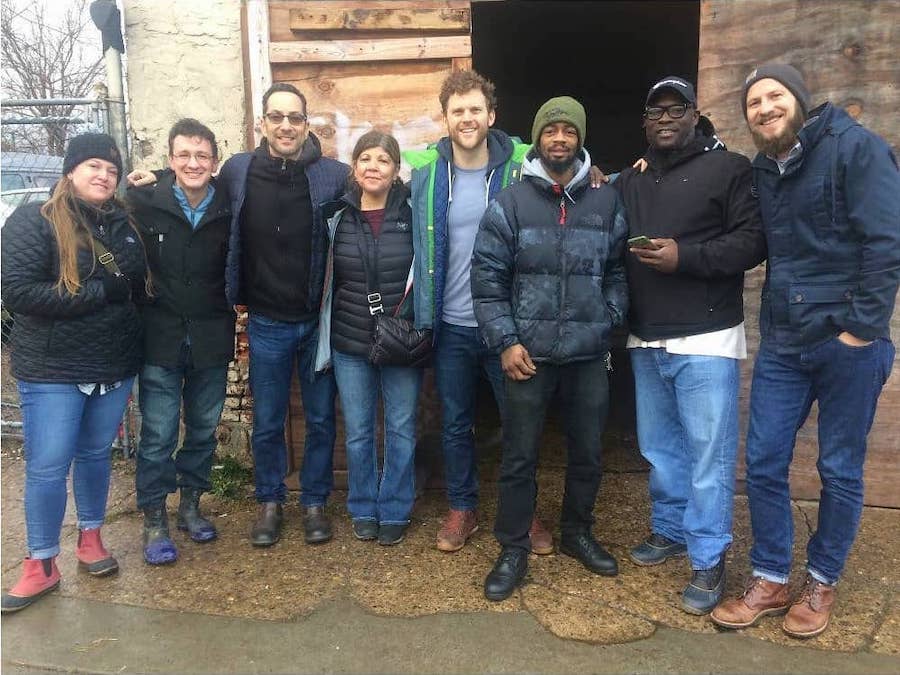 Spak (second from left) served as location consultant for the film’s production crew; some of the Fletcher Street riders played themselves in the film

The cast includes several of the Fletcher Street riders themselves, including rider Ivannah-Mercedes as the love interest of Cole (named after John Coltrane), the young man whose moving in with his father sets the story in motion. Eleven of the film’s 14 stunt doubles also came from the neighborhood, as did more than 100 extras, all of whom are now members of the actors’ union, SAG-AFTRA.

The film company and Spak have also gone all-in on finding new land where the Fletcher Street riders can stable their horses and let them graze. Staub, Spak and the residents have jointly formed a nonprofit, the Philadelphia Urban Riding Academy (PURA), to both further this goal and to introduce more Philadelphians to the city’s century-old cowboy culture and the art of riding.

Spak says that the group has identified two city-owned parcels of land that might be suitable, but that it has yet to negotiate terms for acquiring them from the city. “We do want to be able to move them to a site they can control,” he says. “Part of the problem with stables and the history of Black riders in Philadelphia is that most of the time, they don’t own their land. And when they don’t own their land, it’s easier for them to be dispersed and broken up. Fletcher Street is now made up of a multitude of different stables [in many locations] that had been dissolved and have come together at Fletcher Street. So that’s part of the problem, and we want to solve for that.”

The PURA accepts donations on its website. You can now watch Concrete Cowboy exclusively on Netflix, where the film premiered on April 2nd.