On the Market: Renovated Foursquare in Mt. Airy

The owner of this beautifully renovated classic taught himself the ins and outs of the renovation game when he transformed this house. It should be no surprise, then, that he’s selling it himself too. 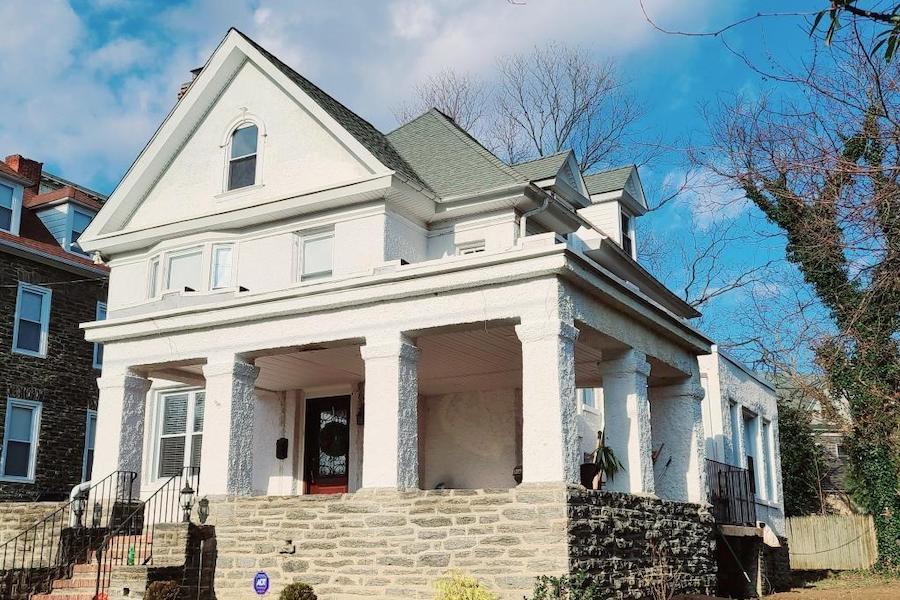 You might be forgiven for confusing this rejuvenated foursquare house for sale in Mt. Airy for a Craftsman, but don’t let those thick front-porch pillars fool you. Renovated by a firefighter who was looking to pursue a passion of his, this striking house sits at 6715 Emlen St., Philadelphia, Pa. 19119 | Photos: Richard Harrison via Bright MLS/Continental Real Estate Group except as noted

The West Mt. Airy renovated house for sale you see above takes the prize for Best Use of Employee Benefits.

The reason? The guy who turned this mid-1920s American foursquare house into a real showstopper taught himself how to play the real estate game with this project. And just as he saved money and learned a lot by designing the renovations himself, he has chosen to save money and learn even more about the real estate game by selling this house himself.

And firefighter Richard Harrison could do all this because his union-negotiated benefits package includes professional real estate advice. And he’s selling this house himself in part because of what one of those professionals advised him to do.

“I had four brokers come to me, like Berkshire [Hathaway HomeServices Fox & Roach] and Elfant Wissahickon,” looking to represent him, he says. “And I also looked into this new up-and-coming company called Houwzer.” (You may recall reading about that company here soon after it launched almost five years ago.) 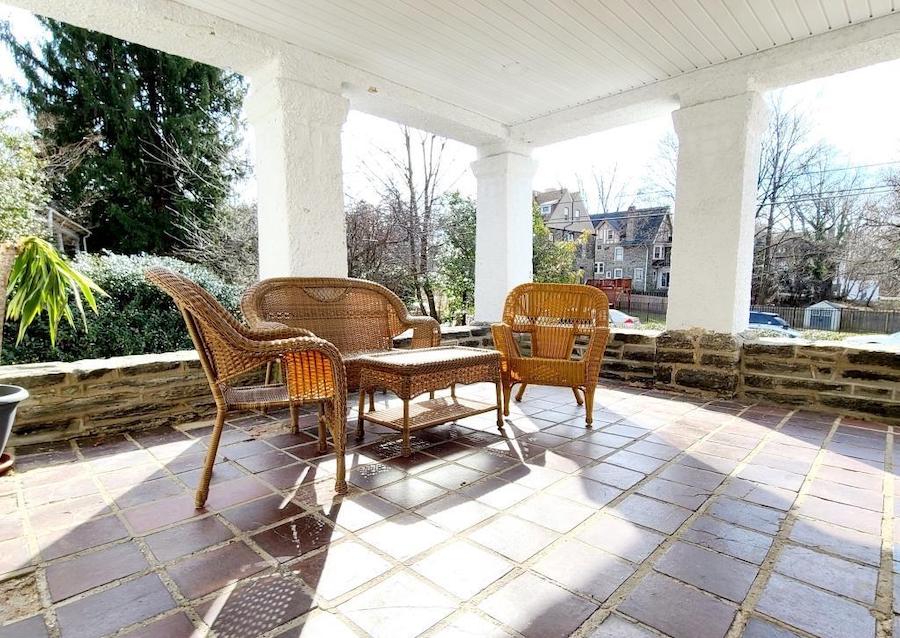 Noting that Houwzer could save him money on commissions, he decided to run a little further with that idea. “Through my job, I get free real estate attorneys,” he says. “So I also consulted with my real estate attorney, and he said the market is really hot because the inventory is so low. He said, ‘Why don’t you put a “For Sale” sign on it and do for sale by owner?’”

Which is what he decided to do, paying a broker of convenience a mere $295 in order to get his house listed on the multiple listing services. 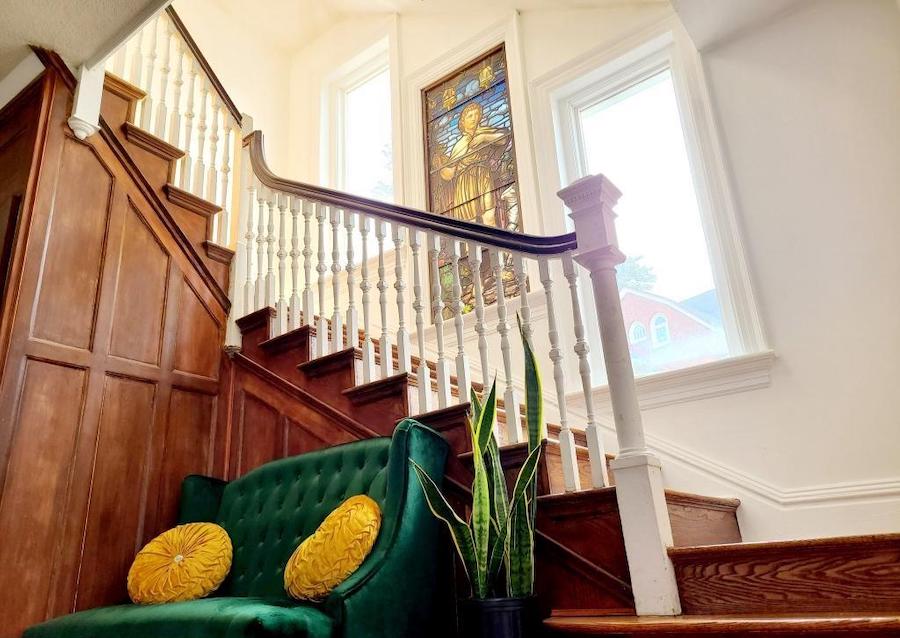 Some of the impetus for going the sell-it-yourself route came from his experience with buying this house in 2017. In addition to access to a real estate attorney for free, Harrison’s benefits package also gives him access to a real estate broker for free. This house was being offered through a program called ”Good Neighbor Next Door” that offers houses for sale to police and firefighters at a 50 percent discount for the first week they’re on the market. 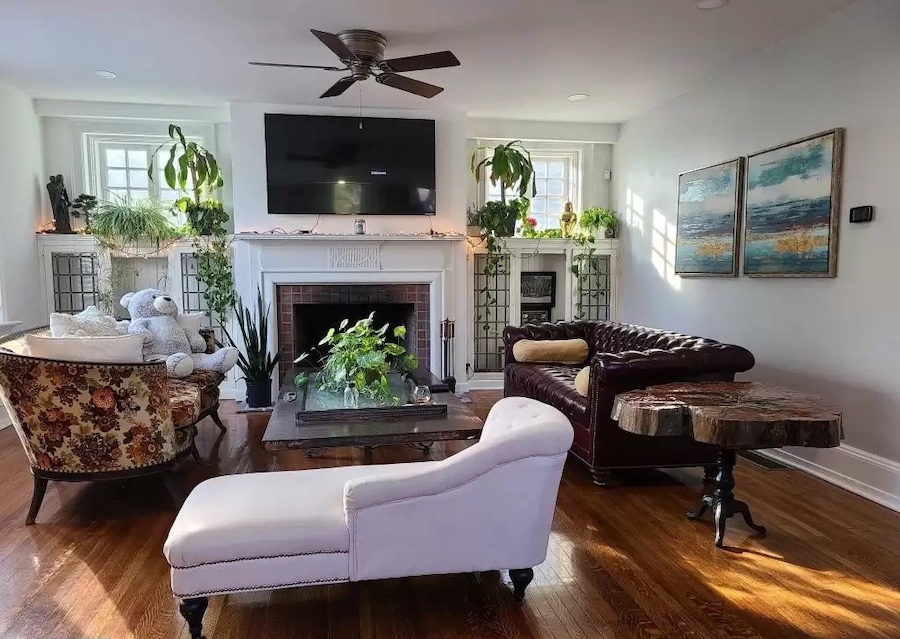 The union-supplied broker actively discouraged Harrison from pursuing this house, but he suspected he was being misled. He went ahead and made a discounted offer for the house through an outside agent — and it was accepted. He got the good news about a week after the broker he got through his job told him it had been sold to a buyer for more than he was offering. 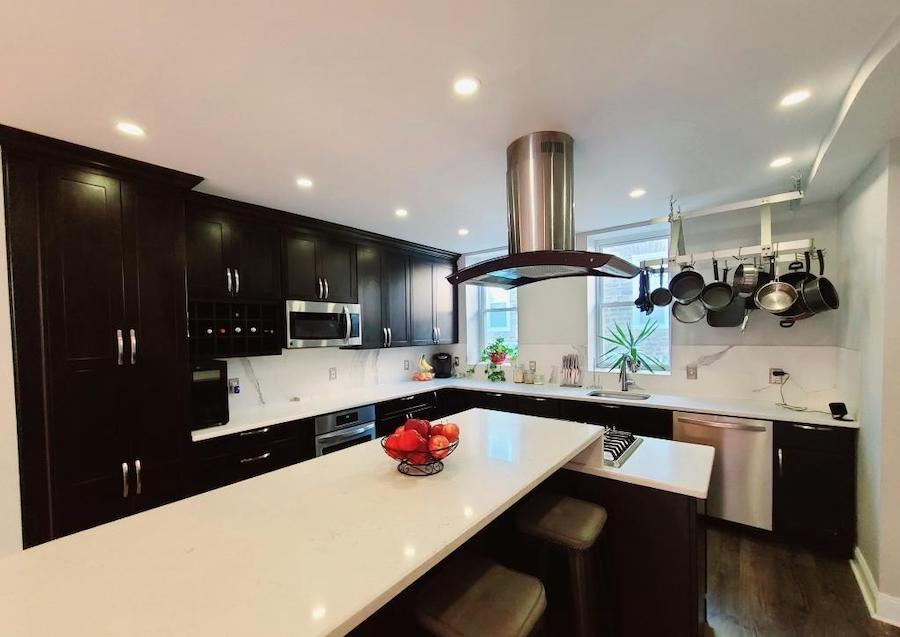 A totally modern kitchen has espresso wood cabinets, quartz countertops and an island that seats seven; it’s open to the dining room next to it

Thus began the three-year “labor of love” that produced this house. Harrison did the design work himself, and if these photos are any indication, he has a very good eye for design. Not only did he preserve and restore all of the house’s original woodwork and flooring, he enhanced its beauty with both new materials and features he found while doing interior demolition. “Every time I demoed a room, it was like finding hidden treasure,” he says. 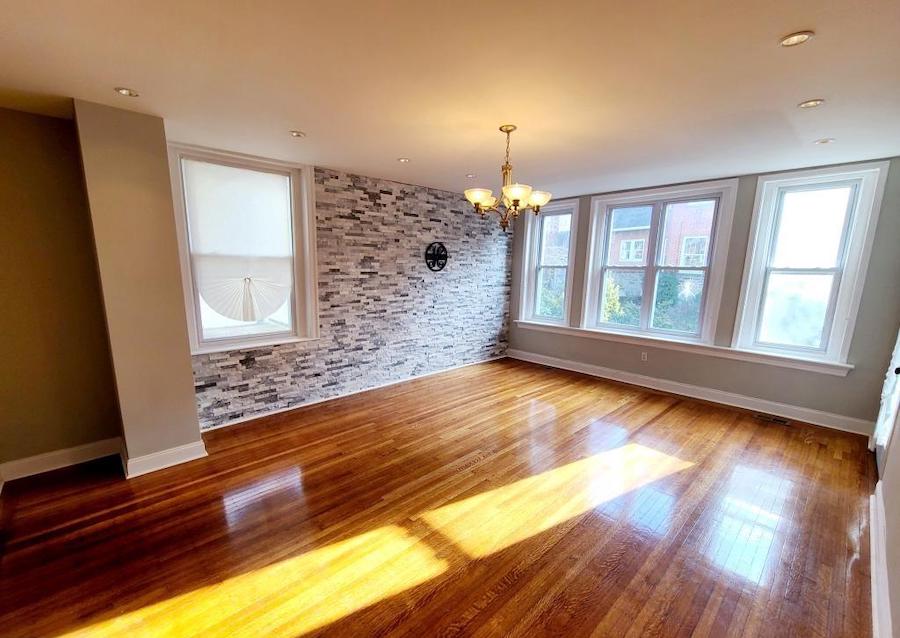 The biggest treasures he found are on display in the bedroom of the second primary suite on the second floor and the solarium at the back of the same floor. The exposed brick wall in the bathroom didn’t pose the problems with drafts that often accompany exposed brick walls, he says, because it’s an interior wall. But the even bigger surprises he found are the vaulted ceilings in.both rooms. 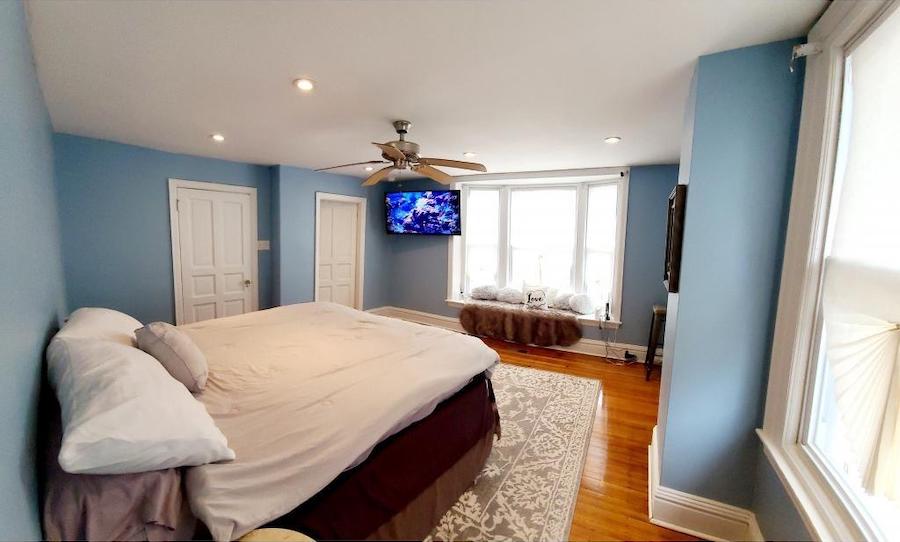 He restored the wood in the solarium ceiling and left it exposed to great effect. He also installed reclaimed wood in the bathroom along with a metal clawfoot tub. 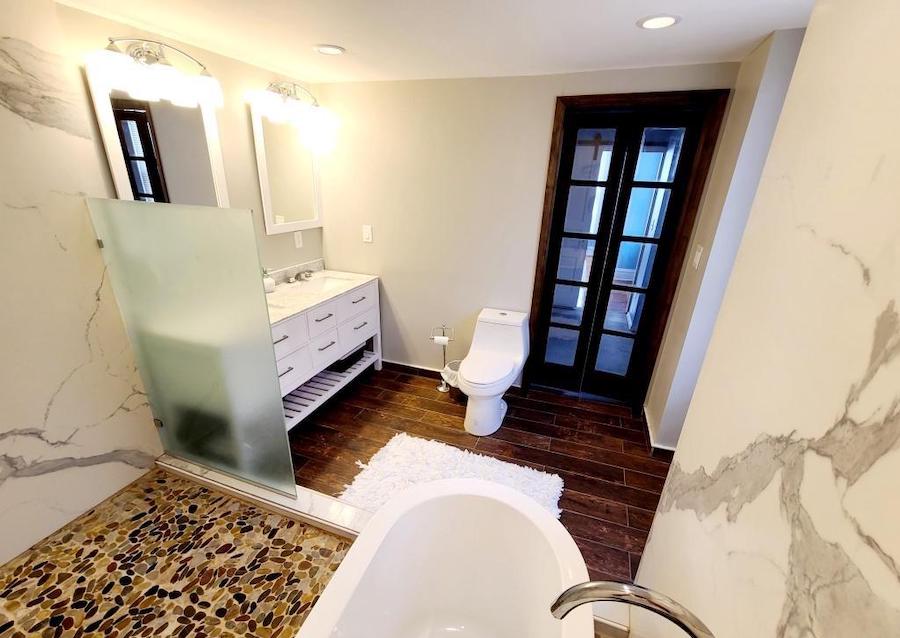 Other creative touches include the salvaged stained-glass window in the main staircase and the stone accent wall in the dining room. 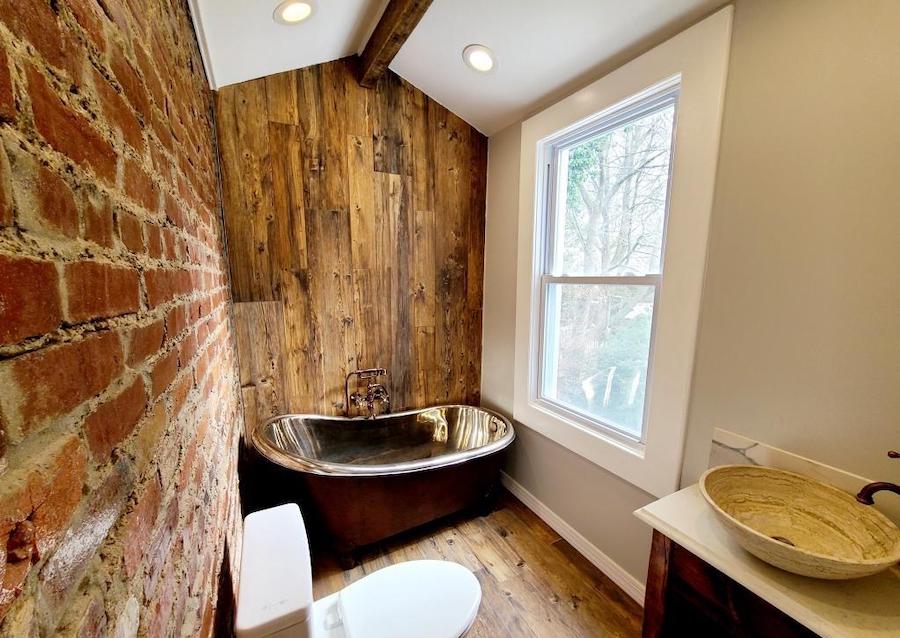 The bathroom in the second primary suite gets the rustic treatment thanks to exposed brick, reclaimed wood and a metal clawfoot tub

The one thing he wanted to do but couldn’t was remove the thick, nearly century-old stucco that covers the brick front-porch pillars. “I asked the masons, ‘What if I just take it off, and point the brick?’ And they all laughed.” And when he asked what it would run to put a stone facing on the pillars instead, he was quoted a figure of $15,000 for the work. 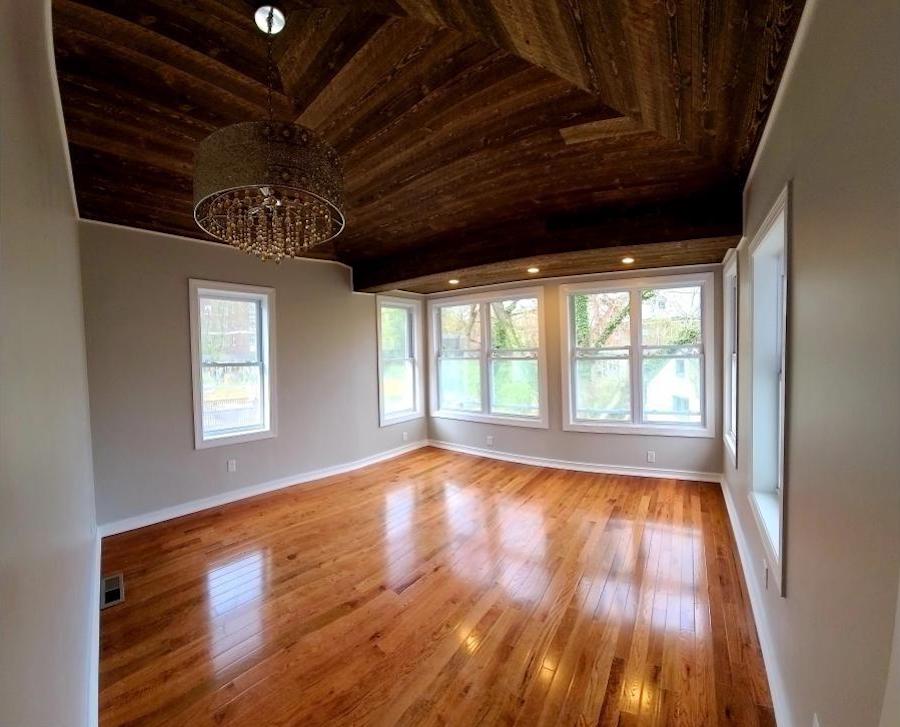 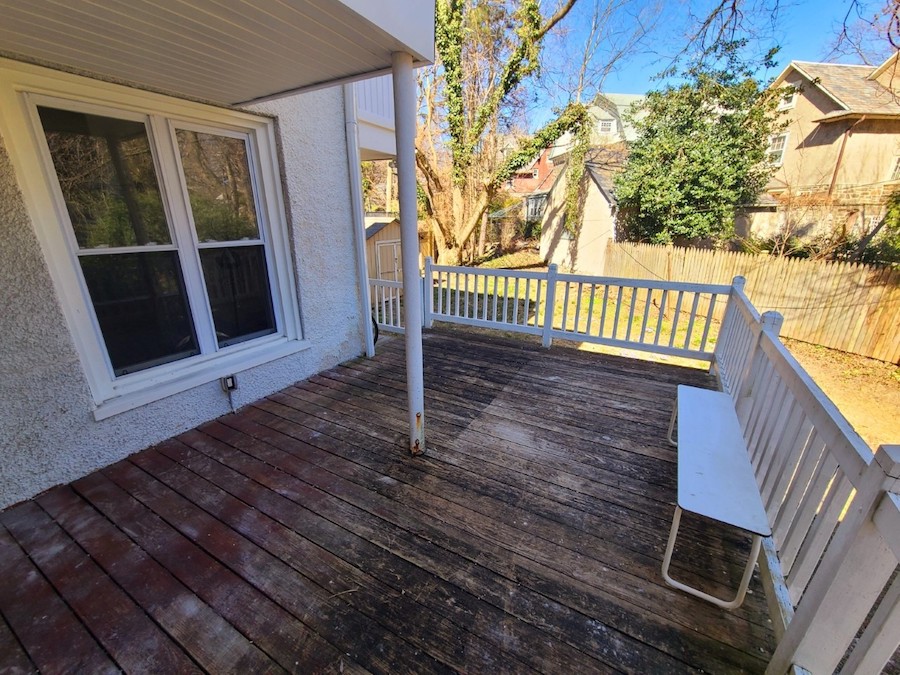 In addition to the front porch, this house has a spacious, partly covered rear deck | Photo via Richard Harrison

It helps that he is currently on family and medical leave and can devote all his time and energy to marketing the house. “This has been my full-time job for the last 30 days,” he says. And what he has learned over those 30 days has given him an appreciation for the work agents do. “It’s not easy being a real estate agent,” he says. “If it was easy, everybody would do it. But if I had signed with a broker early on, I never would have learned what I’ve been learning. And a lot of times, experience is the best teacher.” 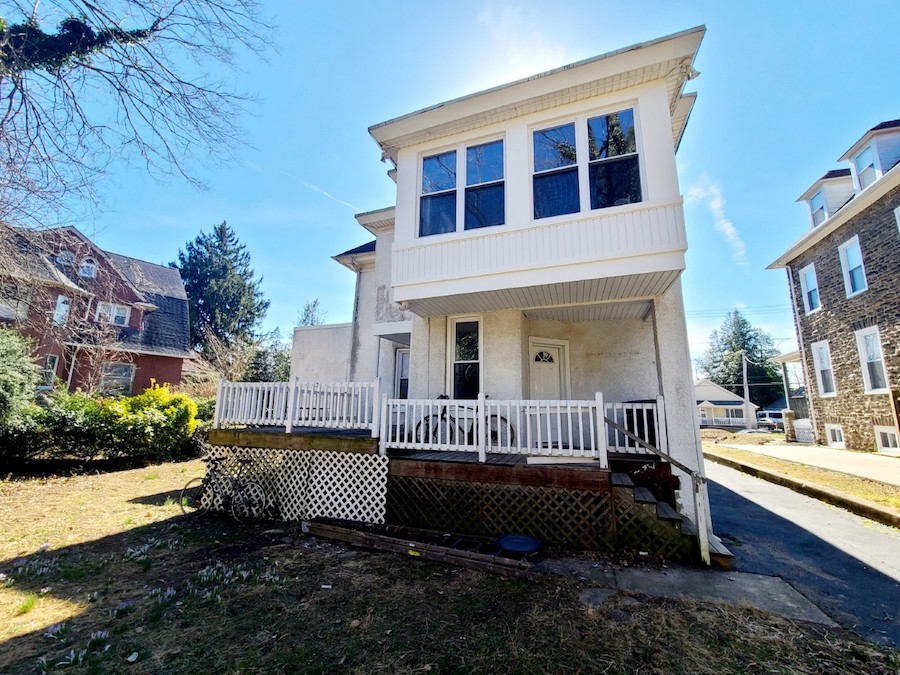 The rear of the house; the solarium earthly covers the rear deck | Photo via Richard Harrison

But because he saved all that money doing things himself, you get a really good deal on a classic house that sparkles like new in a neighborhood people love. Including Harrison, who calls Mt. Airy “one of the gems of Philadelphia.” This house is close to the original Weavers Way Co-op location, a great local coffee shop, a beloved local bookstore and Carpenter Regional Rail station, which trains now call on once again.

And Harrison got an education that will no doubt serve him well should he decide to play this game again. It was a unique opportunity that landed in his lap — the broker who tried to deal him out of the house told him he had “hit a grand slam” — but he managed to make the most of it. “I felt like it was destined for me to get it,” he says.

It will be interesting to see what Harrison does with the lessons he has learned going forward.