Just Listed in the Poconos: Rustic Reproduction in Canadensis

The warmth and homey charm of days gone by have been captured perfectly in this house that’s all of 15 years old. (Maybe.) 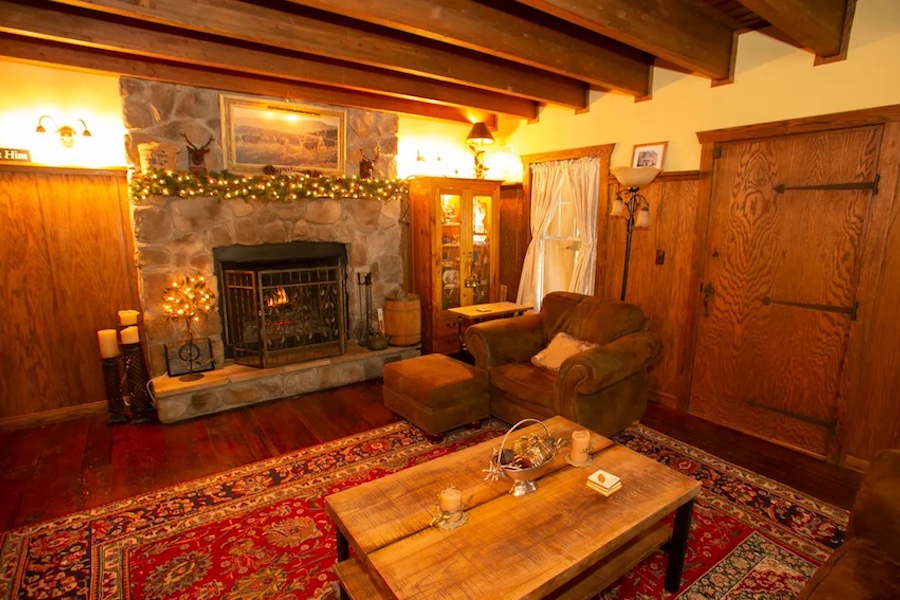 Doesn’t this image conjure up dreams of warm evenings with your loved ones? You can live those dreams if you buy this rebuilt earl-20th-century house at 106 Lower Seese Hill Rd., Canadensis, Pa. 18325 | Pocono Mountains Association of Realtors MLS images via Keller Williams Real Estate

While you will find, and we have featured, some fabulous houses that have survived for decades, even a century or more, in the Pocono Mountains, most of the housing stock in this popular vacation region is of relatively recent provenance: the old-timers are those contemporary and midcentury traditional houses that have been here since the 1960s or 1970s. 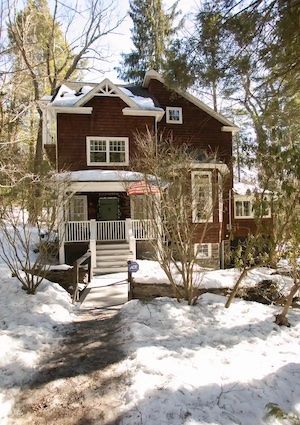 Thus, it’s refreshing to run across a more modest house for sale in the Poconos that has been here for decades longer than that.

This Canadensis house for sale is one of … wait. No, it’s not — rather, it’s a faithful reproduction of the house that arose on this one’s foundation back in 1918.

The listing agent gives us no clue as to what caused the original house to disappear* sometime before 2002, but it should be clear from these photos that its owner loved it so much that they decided to rebuild it on the spot. The rebuild took three years, from 2002 to 2005.

And can you blame them? For, after all, this house has all the old-fashioned rustic charm one could possibly want.

It departs in a few ways from the classic foursquare house form it derives from, though. From the outside, it looks like half of a bigger house was tacked onto a smaller one, and it has one unusual feature projecting from the third floor.

But before we get to it, let’s start at the front door, which leads not into a foyer or the living room but into the kitchen. 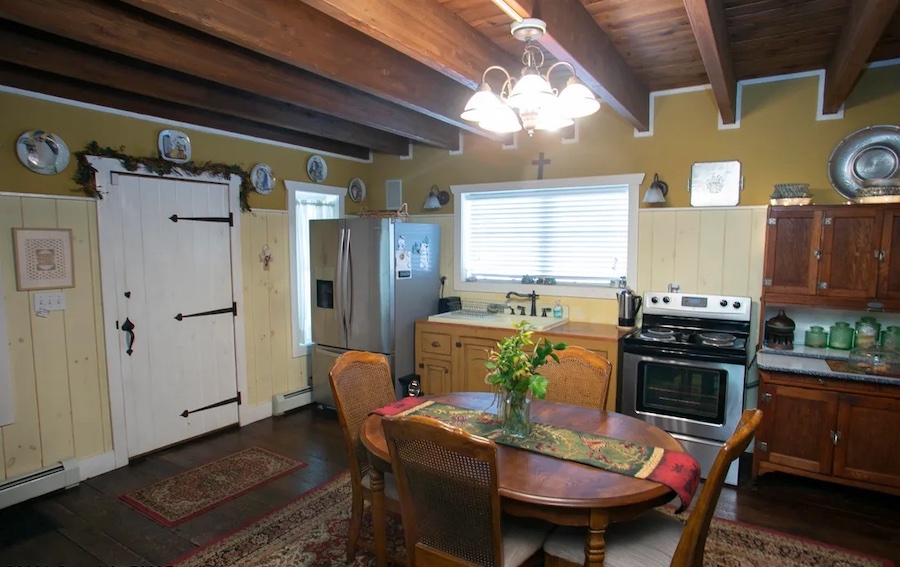 The kitchen is probably the most modern of all the rooms in this house, and that’s not saying that much, for what’s modern about it are its totally-au-courant appliances. Everything else looks like it was salvaged from sometime around 1918, even the new stuff like the kitchen sinks.

From here on, it’s old-school rustic all the way. Every room in this house except the attic has a beamed ceiling, and rough-hewn wide-plank barn wood floors grace the first and second floors. 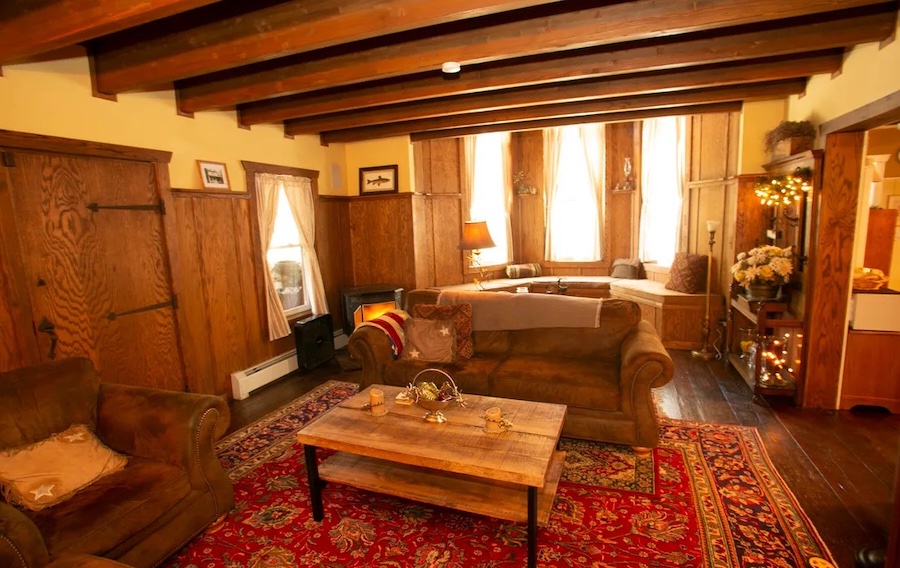 The cozy living room features both a wood-burning fireplace at one end and a pellet stove at the other, next to the bay window banquette. 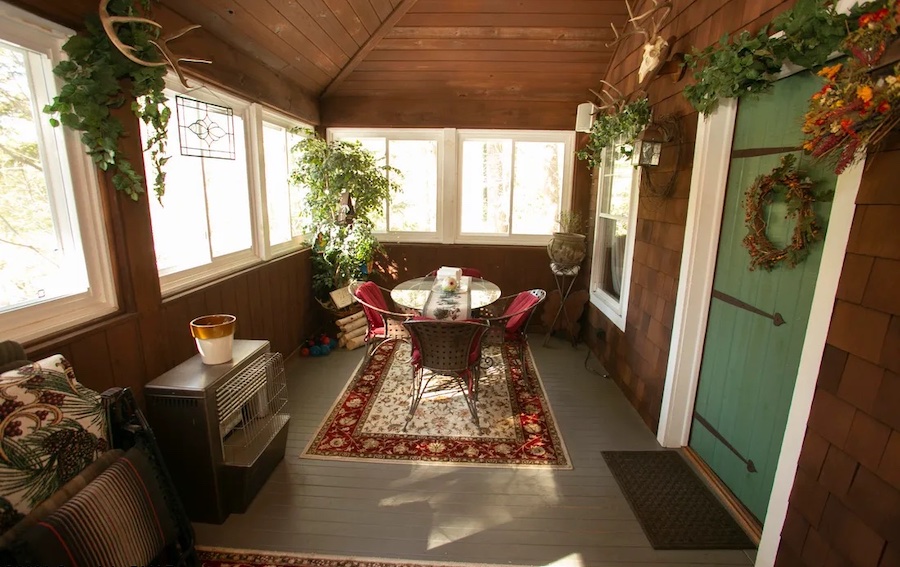 There’s also a sunroom off the living room, also made completely of wood and built as an add-on to the exterior. 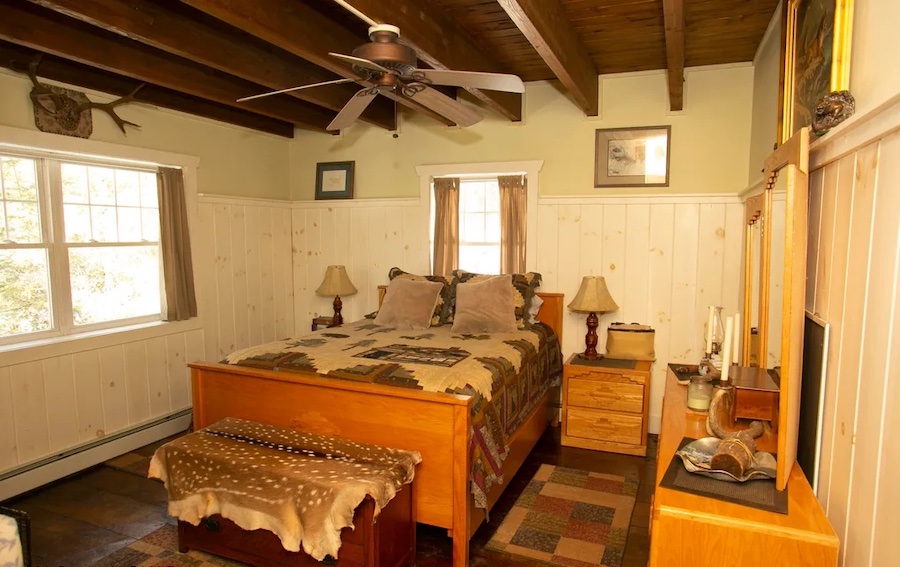 The walls of the upstairs bedrooms get an extra measure of rusticity through the use of shiplap and wood siding on their walls. 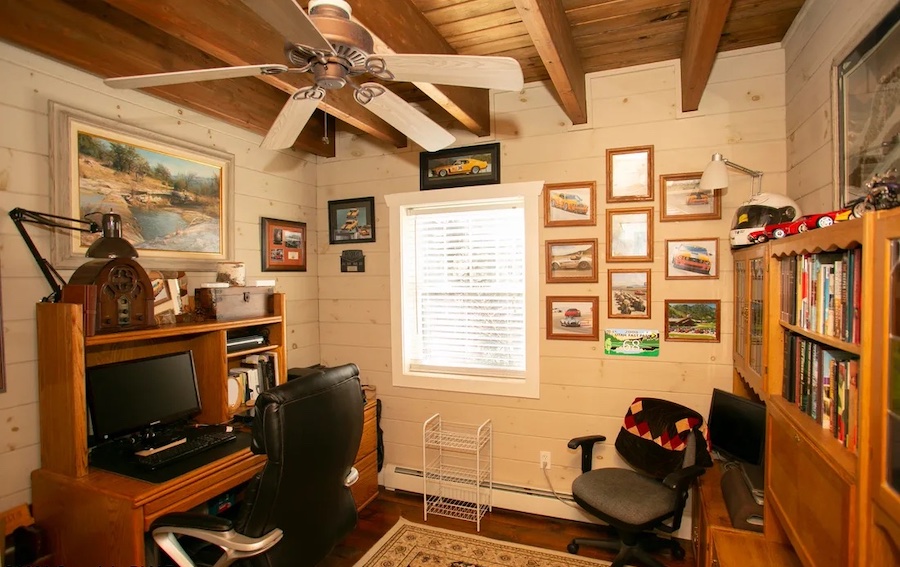 One of the three bedrooms currently serves as a home office. 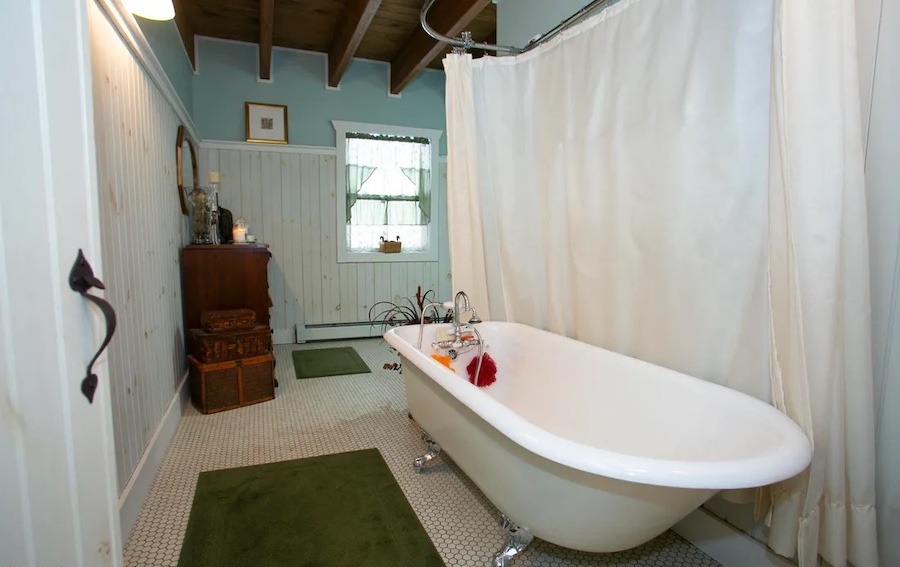 And the L-shaped second-floor bathroom boasts a genuine clawfoot tub. Those claw feet, however. suggest that it was new, not salvaged, when it was installed. 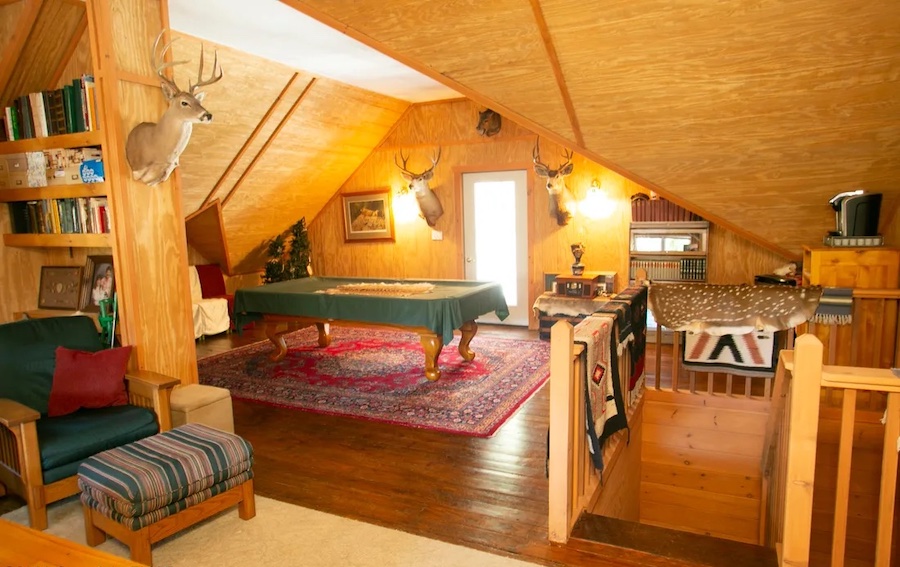 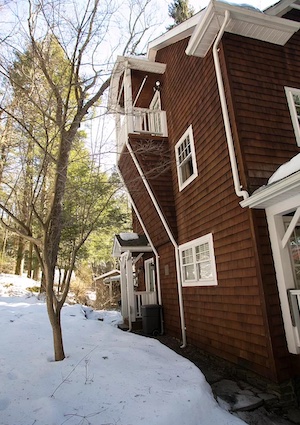 The third floor consists of a single room lined in plywood that serves as a rec room, den and even guest quarters. Its pool table comes with the house as part of the sale.

Behind the pool table, a small balcony lets you look out on the woodlands that surround this house.

The one-acre lot this house sits on is as picturesque as the house itself, with two small streams flowing through it.

And if what you want in a vacation home is a place to truly get away from it all, this rebuilt Canadensis house for sale is what you’re looking for. As the crow flies, it’s about 10 miles to Mt. Pocono and about 20 to East Stroudsburg; as the local roads go, they’re even further away.

Conservation and game lands surround you, so feel free to invite your hunting buddies if you make this historical revival your own.

OTHER STUFF: You won’t have a large air-conditioning bill in the summer, because this house isn’t air-conditioned — Mother Nature and the ceiling fans in every room do the work instead.

*Or did it? A good look at the photos suggests that much of not only that older house’s DNA but also its materials made it into this one, and while the listing agent’s copy says it was built between 2002 and 2005 “on the original footprint of the 1948 home,” its year of construction in the public records is listed as 1918.