On the Market: 1797 Farmhouse in Cinnaminson

Surrounded by suburbia, the Sweetwater Homestead — once the anchor of a 92-acre farm — has been refashioned for modern living. 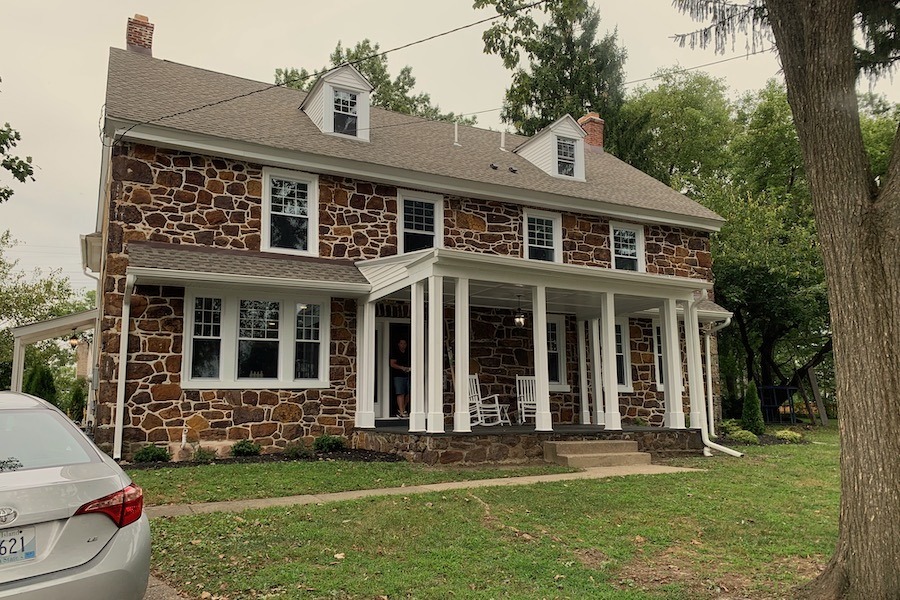 Surrounded by the 1950s, this handsome restored farmhouse takes you back to the 18th century while offering you the comfort and amenities of the 21st. It’s located at 709 Glenwood Court, Cinnaminson, N.J., 08077 | This photo: Sandy Smith; all others: Nick Danze Photography

Quite likely, the first reaction you will have upon driving up to 709 Glenwood Court in Cinnaminson is the one I had when I did just that:

Here’s the answer: That cul-de-sac and the scores of houses that surround it were once the domain of this house’s original owners.

“Originally, it was the Sunny Slope Farm,” realtor-developer David Spaventa says of this Cinnaminson farm house for sale. “The owners had this parceled as a 92-acre farm. Over the years, they had sold [pieces of the farm] off for development.

“Then, I believe it was in 1959, they sold the remaining parcel to a developer and they built this neighborhood here.”

The original house you see in the photo above dates to 1797-98.  As the farmland shrank, the house grew through additions; the last addition to the house was built the same year the owners sold off the last piece of the farm, 1959. What remained of the farm was the .87-acre lot on which this house sits. Spaventa, who has rehabbed other historic houses in the area, bought this one at an auction last year.

That farm once abounded in orchards. “They had everything — maple trees, fruit trees, pear trees,” says Spaventa. “What’s still left are a couple of black walnuts.” (A large oak that stood in the backyard fell in one of last year’s severe storms. Spaventa put a “family garden” plot in its place as a memorial.)

Those black walnuts, you might say, form the root of Spaventa’s restoration, reconstruction and recycling project.

Yes, recycling project. Wherever possible, Spaventa reclaimed wood from the interior demolition and reused it in the makeover. He complimented the reclaimed materials with items sourced from Provenance, the Philadelphia architectural-salvage emporium, to create a house that is at once rustic, classical and modern.

And even though Spaventa had no more idea of what was to come than the rest of us did, the way he redid this house makes it a great choice for anyone who enjoys entertaining but wants to keep things socially distant. 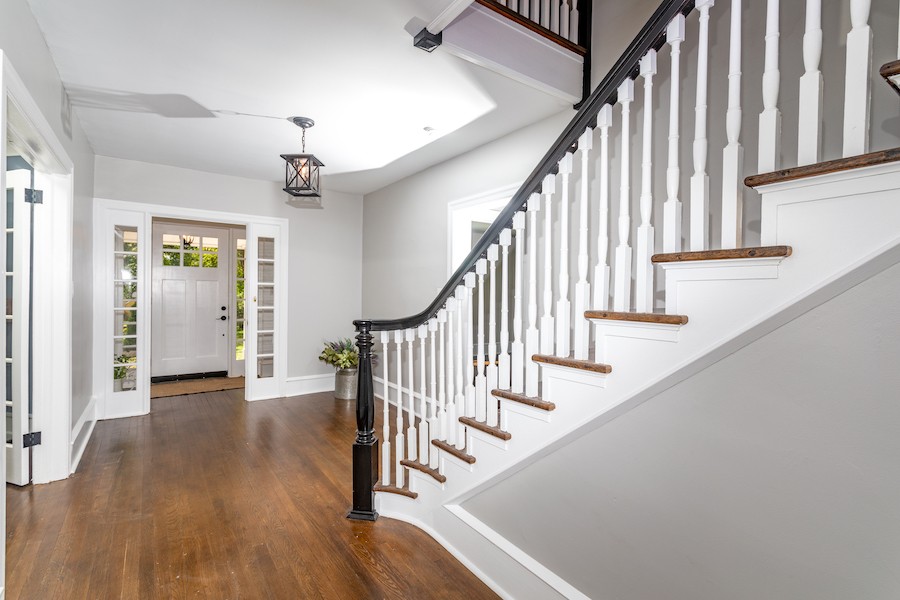 Foyer; the main entrance is on the side of the house, in a wing added early in the 20th century

The main floor contains a spacious living room, an equally spacious dining room and a top-drawer kitchen open to the dining room. 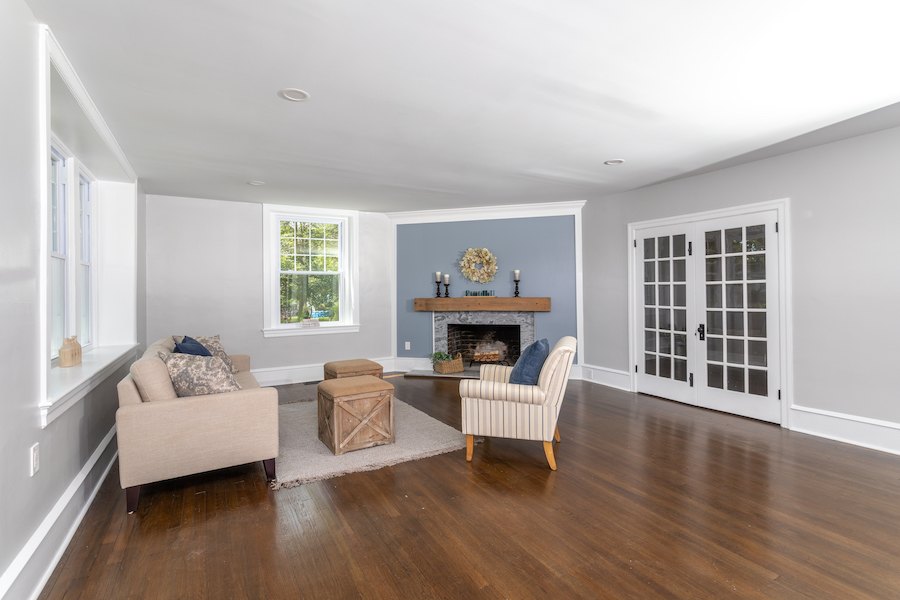 The living room contains the only one of this house’s three fireplaces that still works. Spaventa explained that the flues to the other two had become so badly disfigured that they could not be repaired without demolishing part of the original house. French doors allow the living room to be sealed off from the foyer and the dining room. 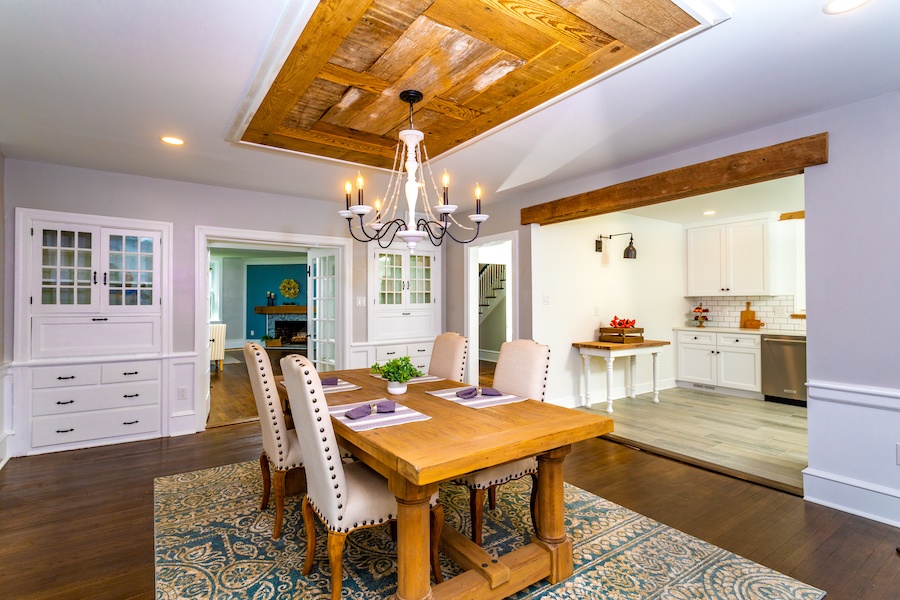 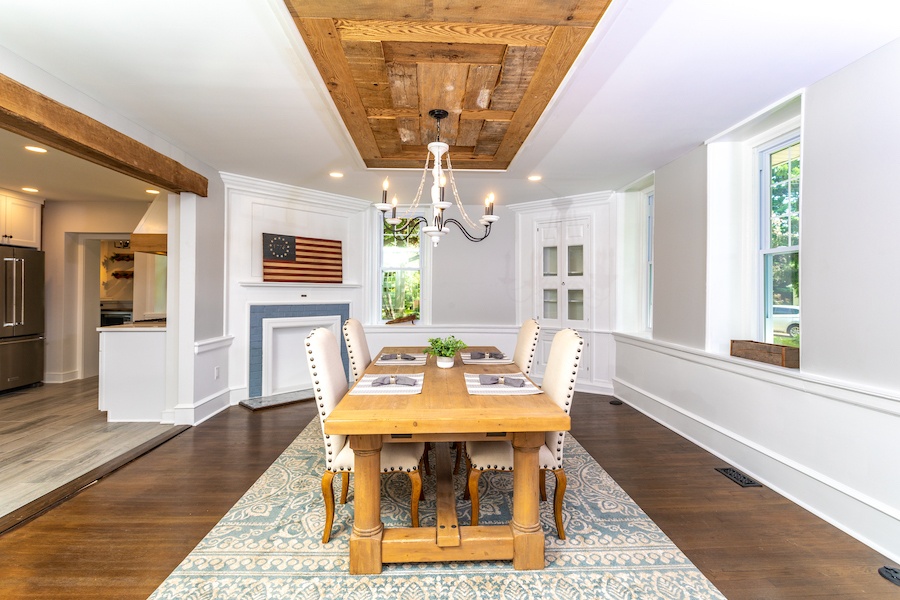 Some of the reclaimed white oak made its way into the dining-room ceiling in a manner that makes it look as though a door had been placed there intact. That’s just one of several clever things Spaventa did in the makeover. The built-in storage drawers, china cabinets and shelves are all original to the house. 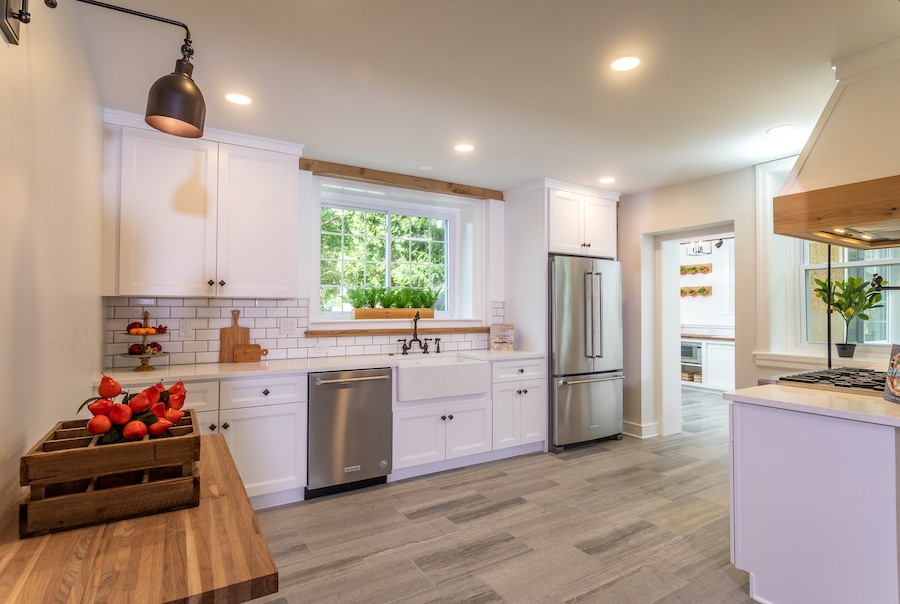 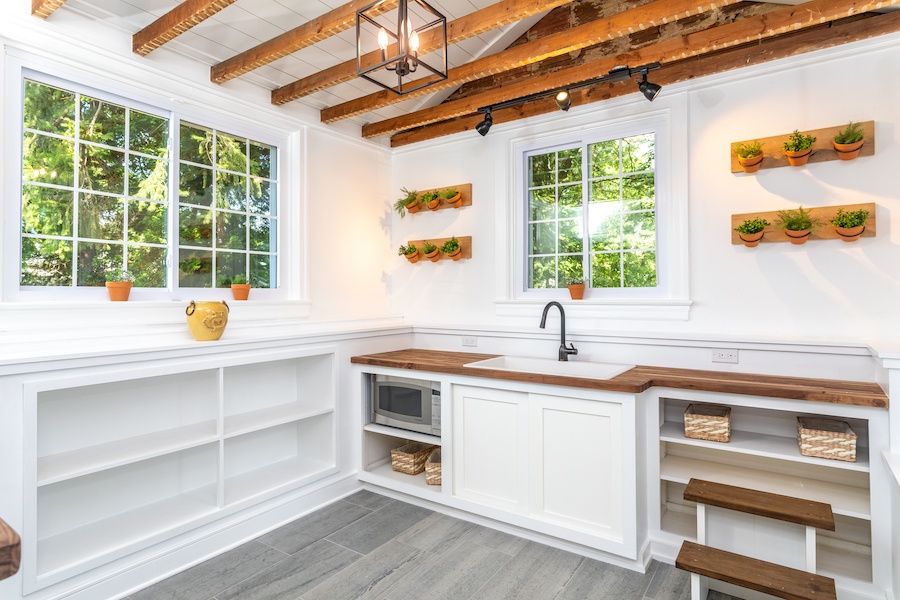 Where the living and dining rooms retain their classic Colonial character, the kitchen is where the rustic and the modern meet. Recycled black walnut countertops, reclaimed white oak trim, reused oak beams in the butler’s pantry and a farmhouse sink lend an air of the rustic to the space, but the modern stainless-steel appliances and above-the-stove pot filler let you know that it’s outfitted for today’s serious cook. 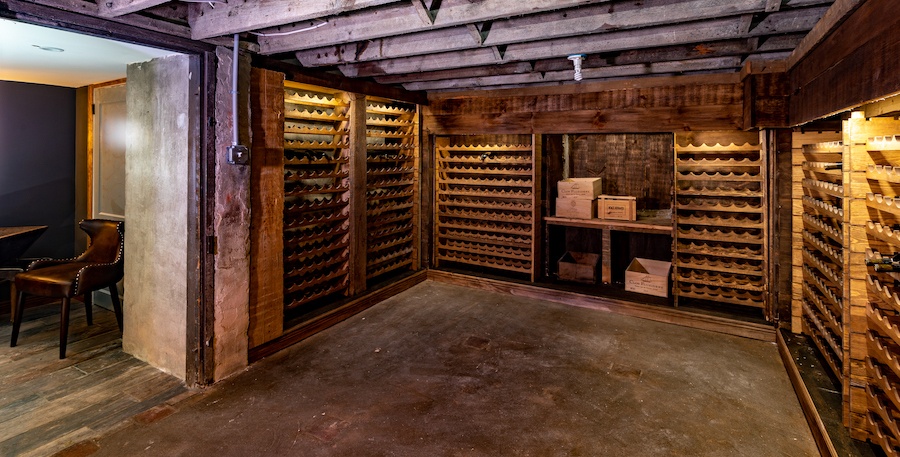 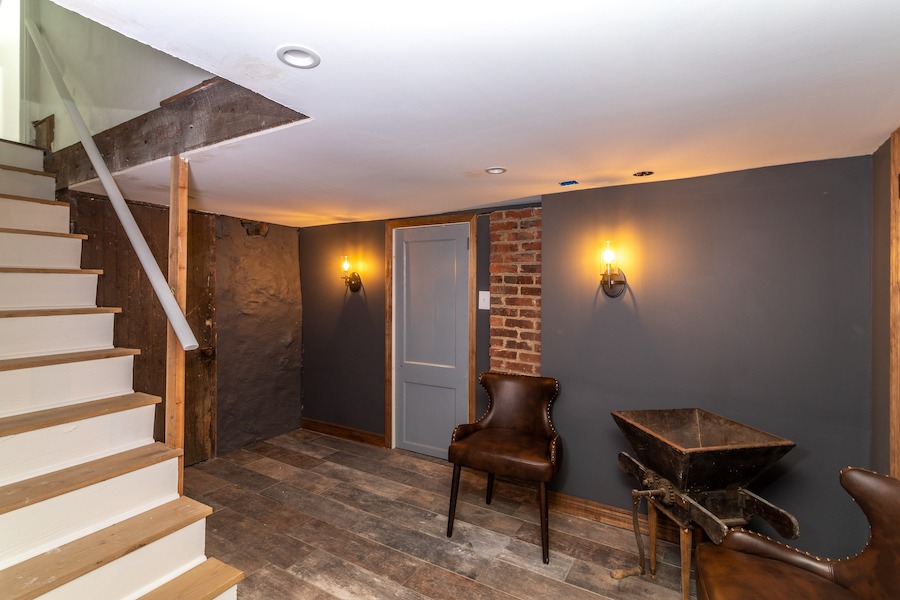 And if you’re throwing a dinner party that tests the limits on gatherings, you also have the option of having some of your guests repair to the basement, where you will find a 700-bottle temperature-controlled wine cellar and an adjacent tasting room. 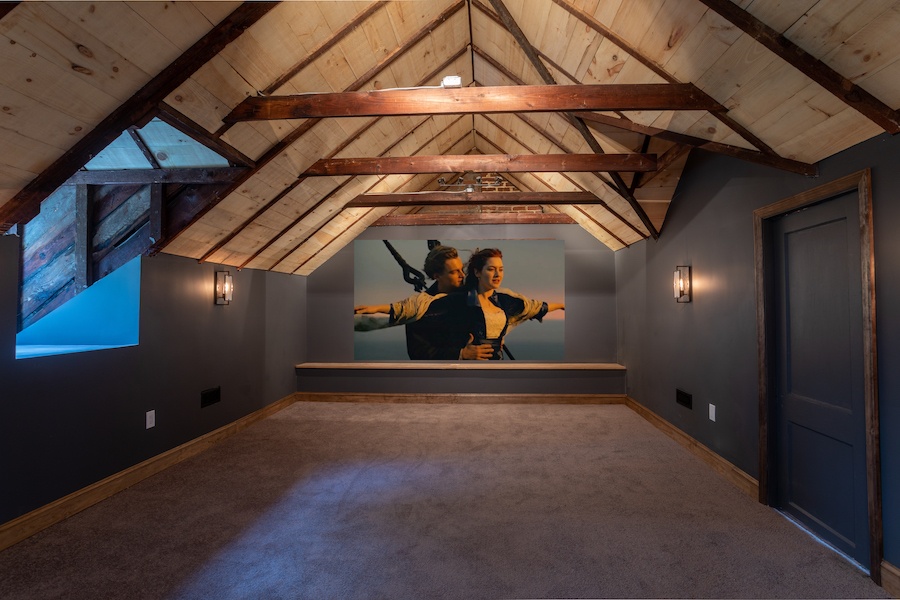 Up on top, in the attic, you will find another space made for entertaining: a screening room designed to hold 16 seats. Here, as in the relaxation room on the other side of this floor, original brickwork and woodwork have been left exposed in places. 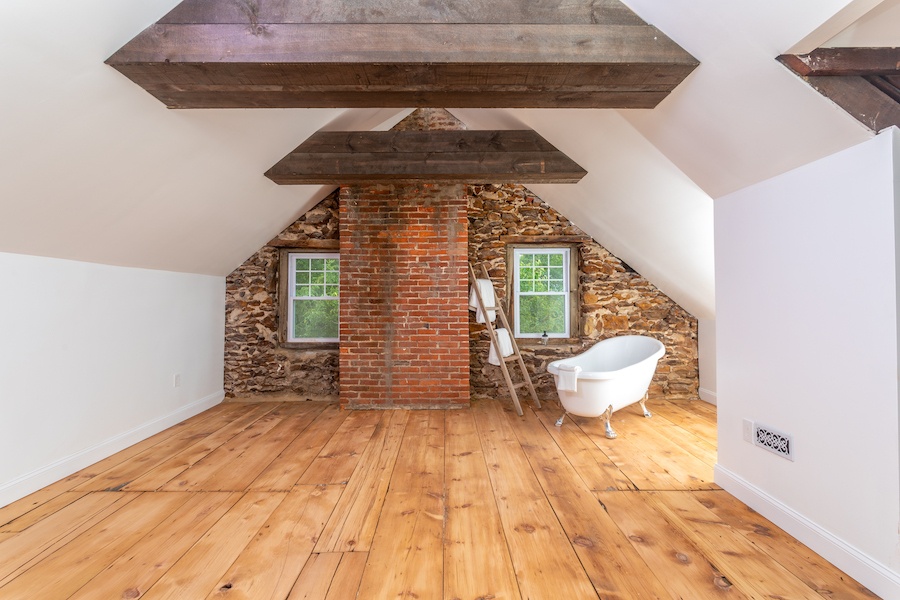 The relaxation room has a clawfoot tub; you could if you want turn this room into your own private spa. Note the thick black walnut beams in this room. 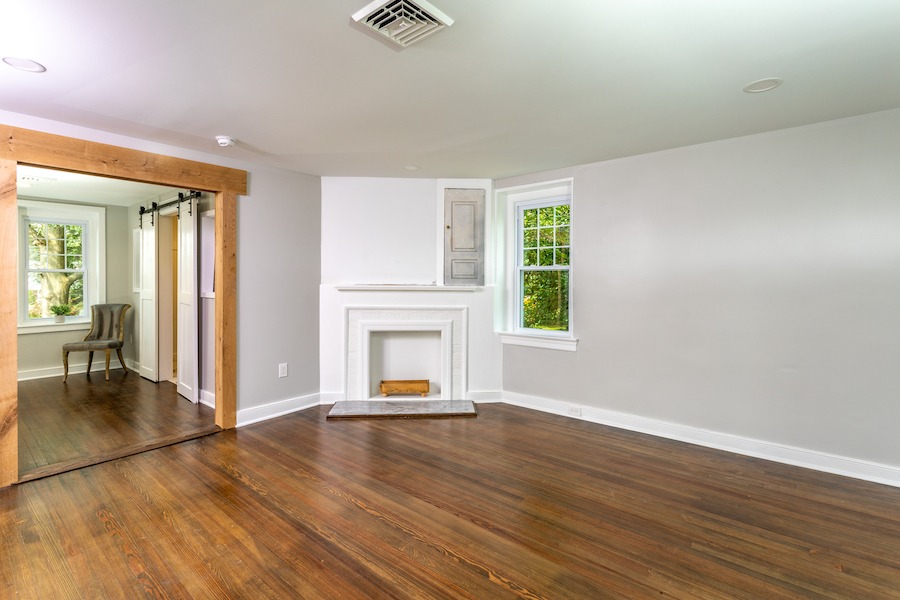 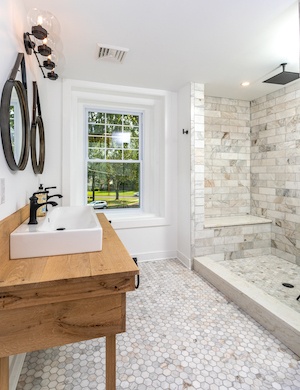 In between the main floor and attic are four of the house’s five bedrooms and two of its three bathrooms.

One of those bathrooms is a handsome new en-suite bath attached to the primary bedroom. It features a computer-controlled programmable shower stall along with dual vanities, hoop mirrors and plenty of reclaimed wood.

The fifth bedroom is part of an in-law suite with its own separate outside entrance on the main floor. 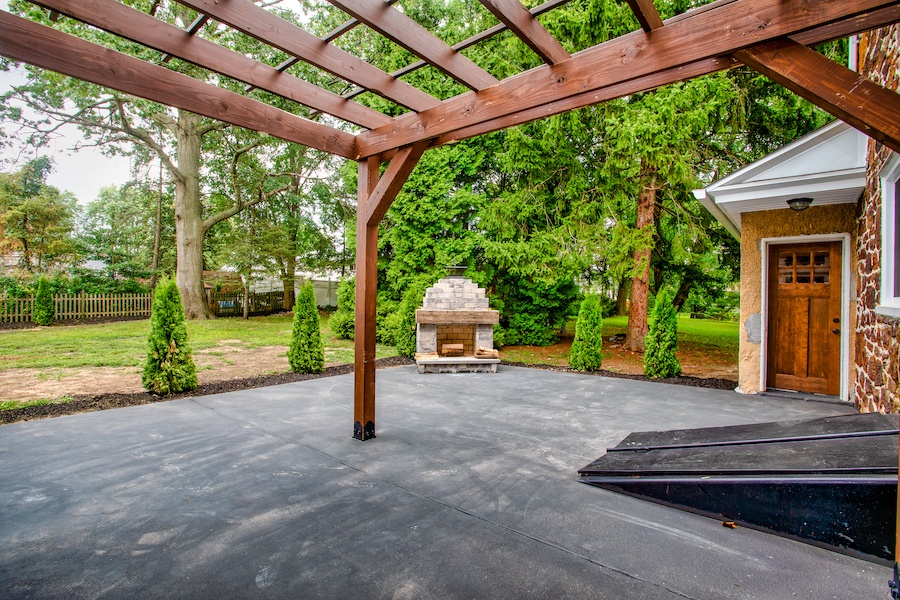 The final nod to this house’s historic past is its name: the Sweetwater Homestead. The name conjures up life on the frontier, doesn’t it? Well, those days may have long since passed in this corner of New Jersey, but I can think of very few nicer places for you to stake your claim to a little piece of the good life than this historic Cinnaminson farm house for sale.