Just Listed at the Shore: Arts and Crafts Bungalow in Strathmere

One of the oldest houses still standing in Strathmere has a uniquely West Coast inspiration. The family that has owned it for a century is part of the community’s soul. 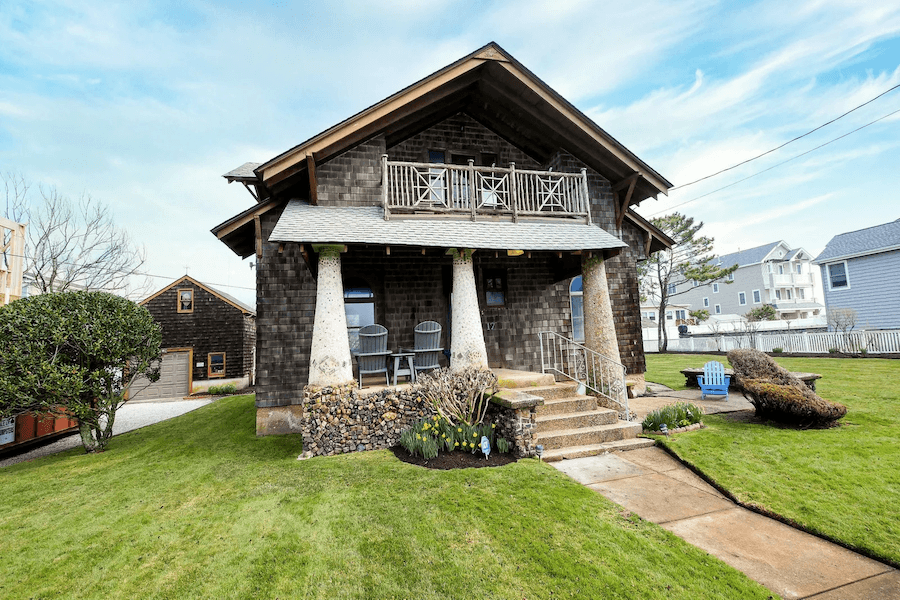 A legendary Penn doctor and a globe-trotting ambassador have made this truly one-of-a-kind house at 17 E. Tecumseh Ave., Strathmere, N.J. 08240, their home. Now it could be yours. | Images via Goldcoast Sotheby’s International Realty

Have you seen anything like this at the Jersey shore?

I’ll bet the answer to that question is “No.”

Which means you now have an exceedingly rare opportunity to own a truly unique Shore house, located in its smallest community.

The agent marketing this Arts and Crafts bungalow near the heart of Strathmere calls it “A Strathmere Legend.” That’s putting it mildly, for it has both an unusual pedigree and distinguished stewards.

This Strathmere Arts and Crafts house for sale is actually the product of an amateur architect, Gilbert Smith. This was one of five houses Smith, who would later become mayor of Avalon, built in 1905 in the community of Corsons Inlet at the northern tip of Ludlam Island. Three of those five houses still stand, including this one. 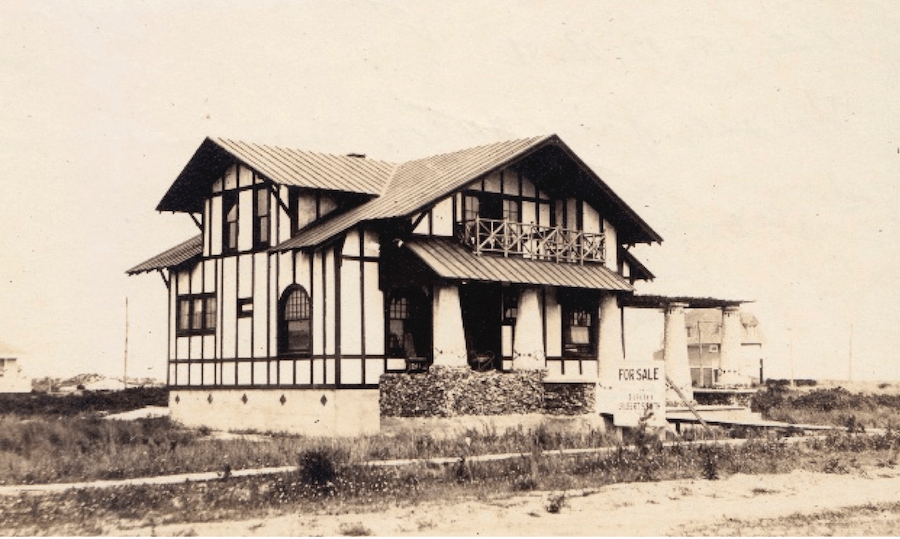 “The California Bungalow” as it appeared in 1905. A stprm in the late 1930s led to the removal of the eastern end of its front porch and its recladding in cedar shingles.

Smith called this residence “The California Bungalow,” and he intended to occupy it himself. But he ran into financial difficulties, and in the late 1910s, he sold the house to Isidor S. and Elizabeth Ravdin.

Isidor Ravdin’s name should be familiar to the staff of the Hospital of the University of Pennsylvania, whose oldest wing bears his name. Ravdin was the chief resident at HUP during the ”Spanish flu” pandemic of 1918-19, oversaw the 20th Field Hospital in the China-India-Burma theater during World War II, and pioneered the use of plasma to treat shock in injury and burn victims. His service in the war landed him a spot as a character in Milton Caniff’s long-running comic strip “Steve Canyon” as well.

His wife, Elizabeth, was something of a medical superstar herself. She was a member of the Penn Medical School’s class of 1919, the second in its history to award degrees to women, and met Isidor while serving as HUP’s first female intern. Their research partnership became a life one when Isidor and Elizabeth, a Jew and a Quaker respectively, married in 1921.

By that time, Corsons Inlet had taken its current name, and the Ravdins spent many summers relaxing and fishing (Isidor’s passion) at their one-of-a-kind home.

Their great-grandson Alex Conner remembers the house fondly. When the 33-year-old instructor at The Barnes Foundation, modern art collector and pottery-foundry owner was a lad, he spent summers there in the company of his grandparents — the Ravdins’ daughter, Elizabeth, and her husband Donald Bergus.

When they weren’t stationed overseas — Bergus served as a U.S. ambassador to several Middle Eastern countries — the couple lived here, retiring to the house for good after Bergus returned from the Sudan in the late 1970s.

“My grandmother was the most amazing person,” says Conner. “She was the glue of the family. She was a firefighter up until she was 79. She and her husband were both emergency medical technicians. They were part of the core of Strathmere.”

And as these photos should show, they had an amazing house at the heart of the community.

Even though its Tudor exterior was replaced by cedar shingles in the late 1930s, the house retains all of its original character in its interior, 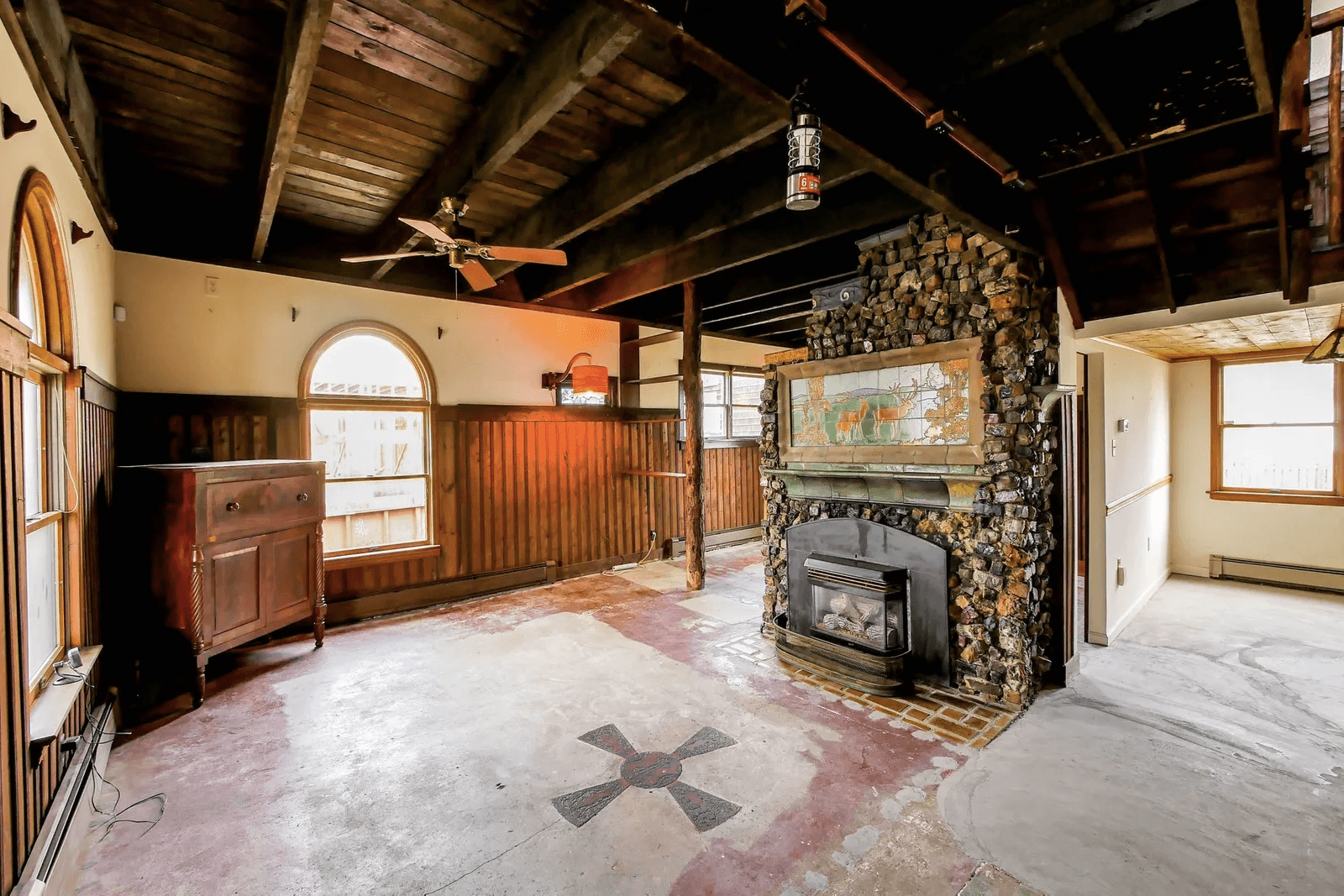 This house is built in a style sometimes called “bric-a-brac” for its use of miscellaneous salvaged materials. 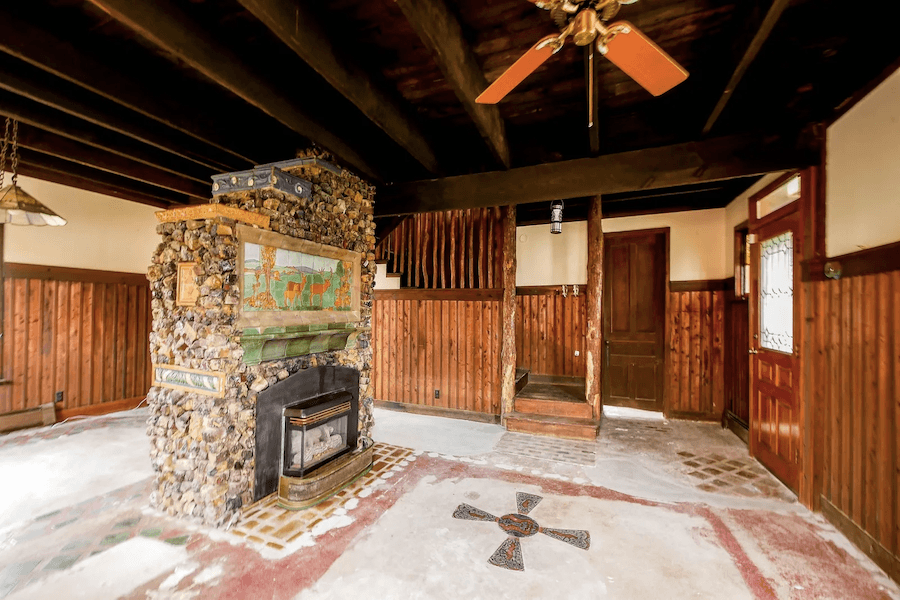 The fireplace, for instance, is made of bricks salvaged from the many glass kilns that made Southern New Jersey the center of glassmaking in America in the 1700s. 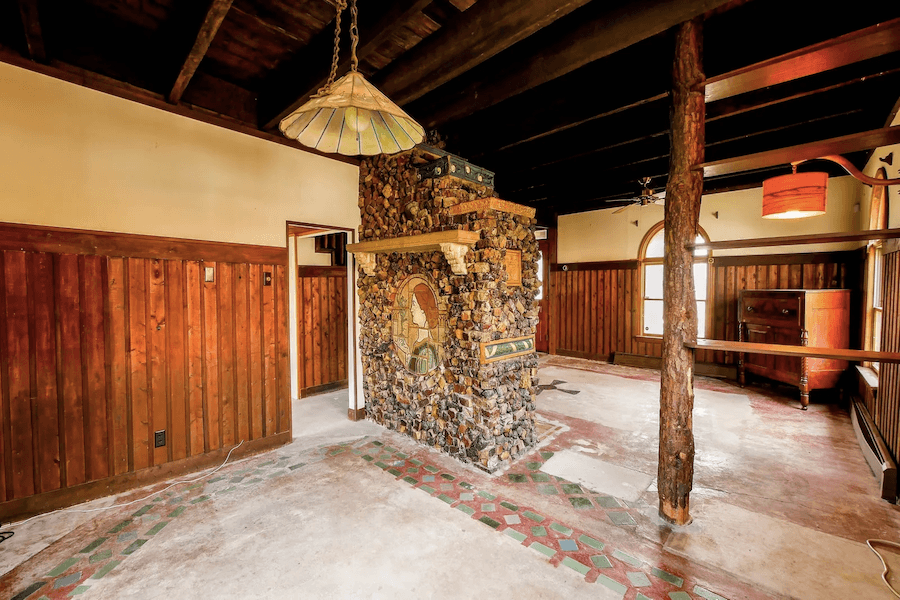 The fireplace and the floor feature inlaid tiles from Grueby Faïence of Boston. Grueby ranks up there with Henry Mercer as one of the premier Arts and Crafts tilemakers; among the places Grueby tile can be found are the Breakers in Newport, R.I., and the Biltmore estate outside Asheville, N.C. 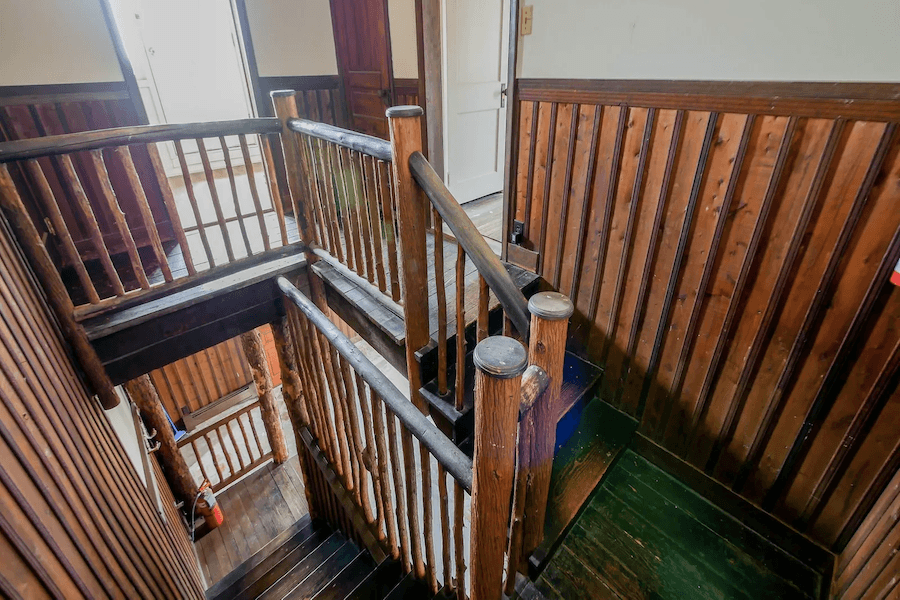 The wood in the bookshelves, balcony and stair railings came from driftwood that had washed up on Strathmere’s beach. 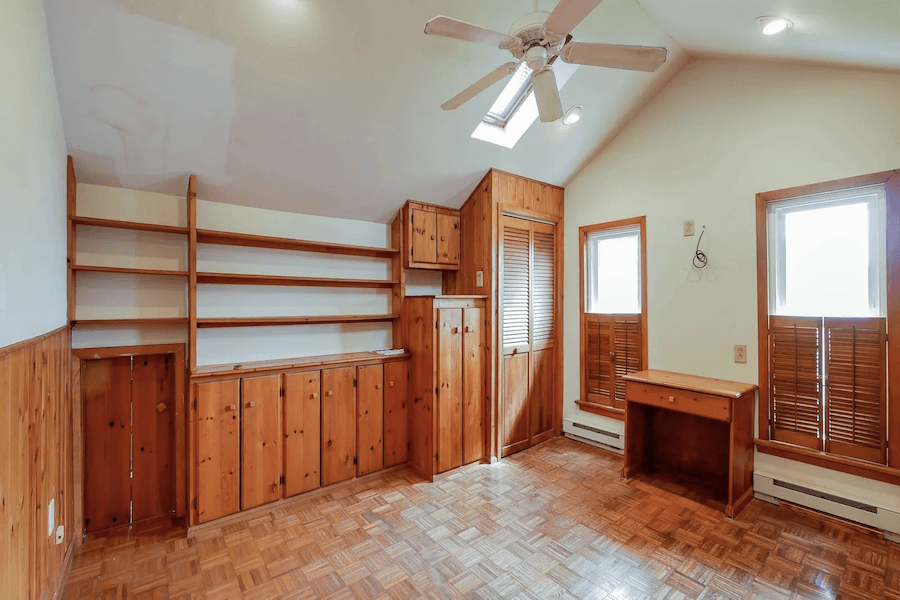 Many of its rooms have built-in bookshelves and cabinets. The small storage spaces are another distinctive feature. “Every room in the house had ‘eaves rooms’ — these little rooms with doors that were perfectly child-sized,” says Conner. 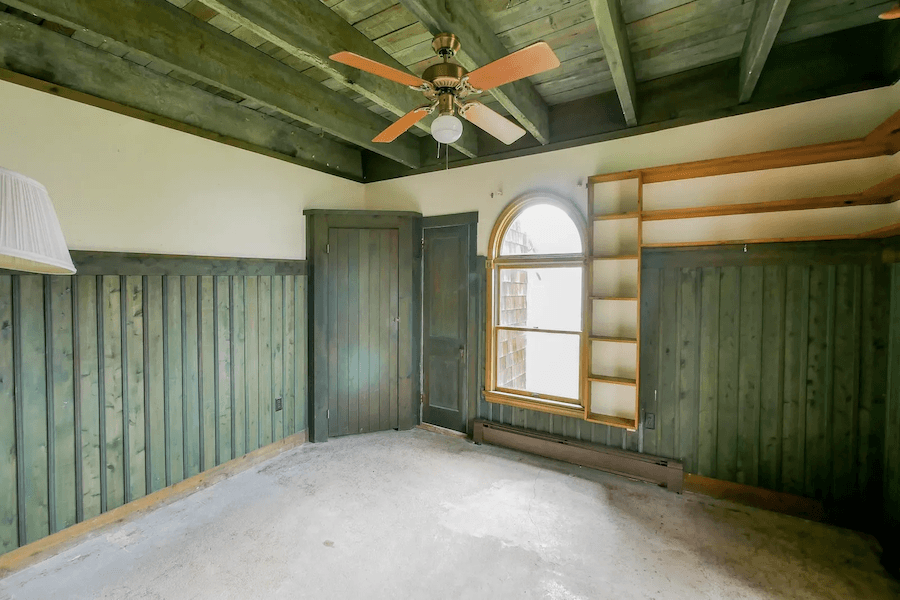 Put another way, this house was built for games of hide-and-seek. 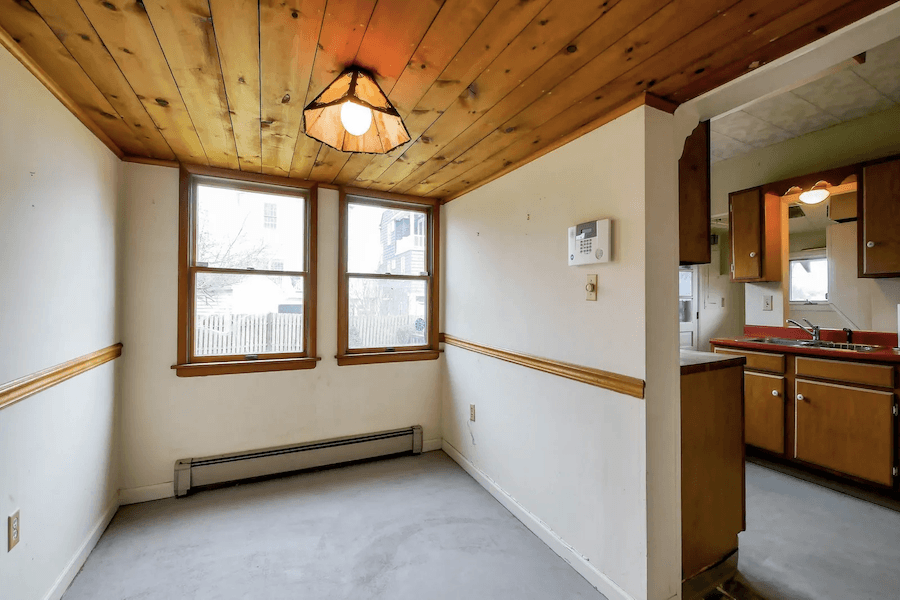 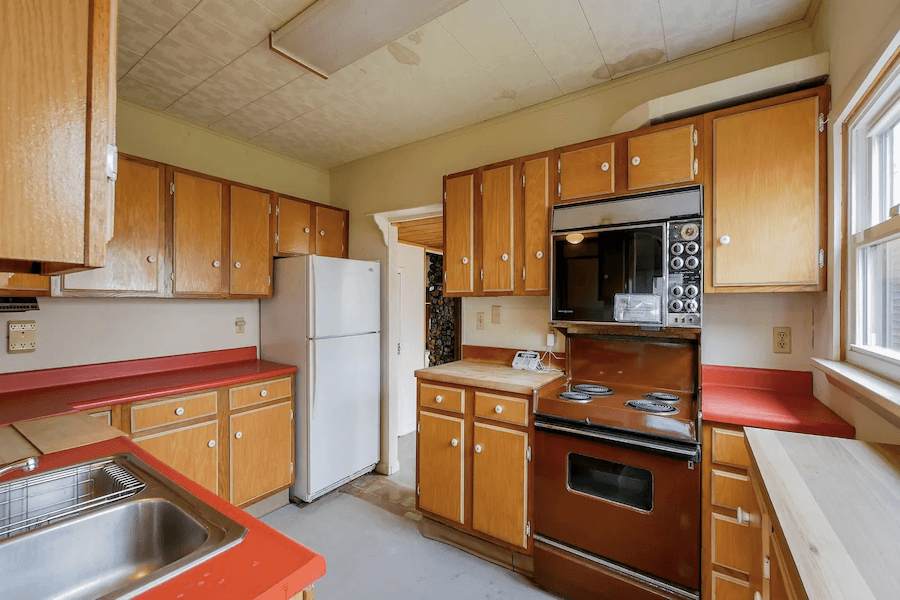 But it was also built for simple comfort. Its kitchen and bathroom were updated right around the time the Berguses returned from the Sudan, and the kitchen at least could use updating, but everything in these rooms is in good shape, including the bathroom’s clawfoot tub. 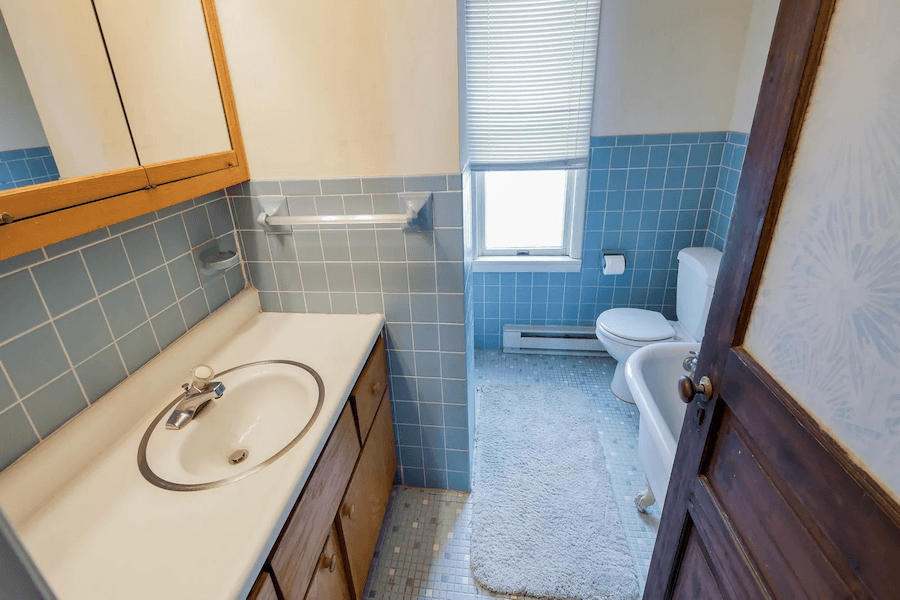 This Strathmere Arts and Crafts house for sale could use some spiffing up and updating in other areas too, particularly restoring its tile main floor to its original sparkle. Its systems could also use upgrading. 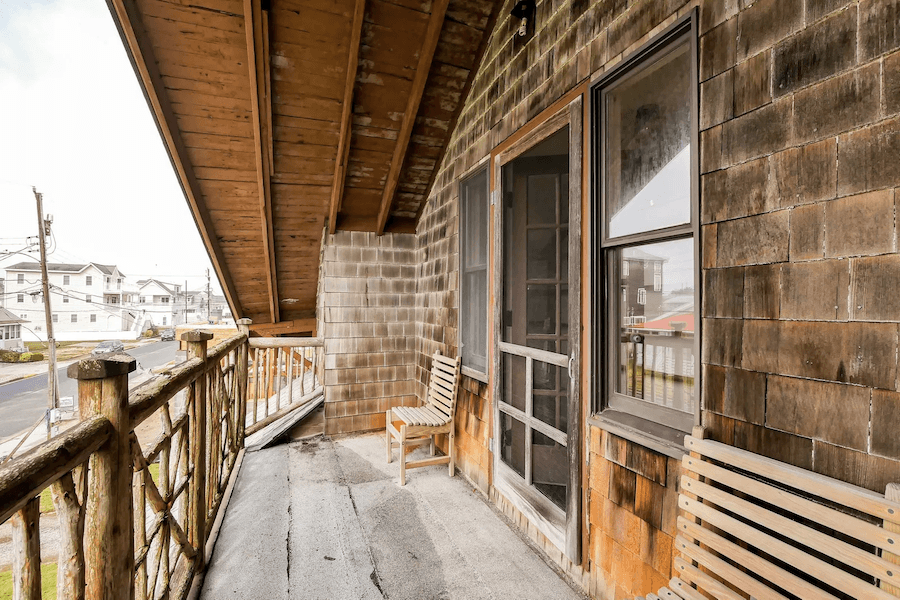 The costs involved in maintaining the house have led to its sale. Conner says that he and his cousins in London would have loved to keep this house in the family, and had their mothers passed away just a few years later than they did, that would have been possible. Instead, they have chosen to put it on the market in hopes that the right buyer comes along to give it the loving care it has had for 115 years.

Perhaps you’re that buyer? If you are, give the listing agent a call.

OTHER STUFF: Additional bedrooms and a full bath can be found in the detached two-car garage.

Updated June 5th, 5:20 p.m., to correct the spelling of the Bergus family name and details about the ownership of the house.