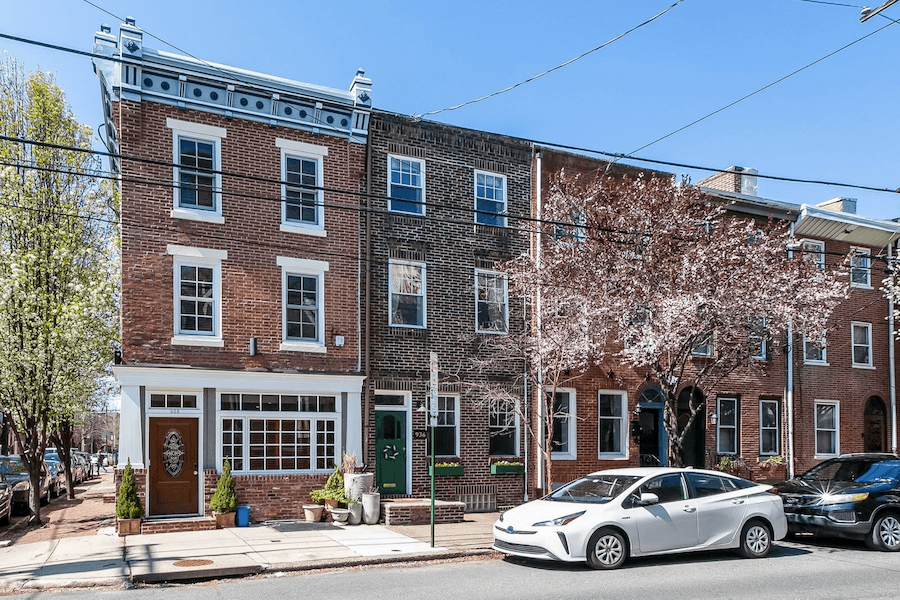 Behind this plain 1920 brick facade lies a renovated rowhouse that’s as far from plain as you can get. You’ll find it at 916 S. 2nd St., Philadelphia, Pa. 19146 | Images via Kurfiss Sotheby’s International Realty

Over the course of a year’s worth of featured houses for sale, we’ve shown you plenty of attractive, stylish modern (or modern-ish) makeovers of traditional rowhouses in neighborhoods all over Philadelphia and its suburbs.

I’ll bet you’ve forgotten what most of those renovated houses look like. Or maybe more accurately, you couldn’t tell them apart if we just flashed the pictures of each house’s interior in front of you.

One reason so many of those renovated houses look alike is because their renovators want to sell them for a certain price. That means the plain tile instead of the textured, or the basic set of three pendant lights over the kitchen island, or the medium-gray walls everywhere, or the mock-Bauhaus wrought-iron staircase railing, or any one of hundreds of other design elements you’ve seen before all over the place.

You’ll find none of that in this renovated Queen Village rowhouse for sale. Instead, this is a rehabbed rowhouse you’re sure to remember. 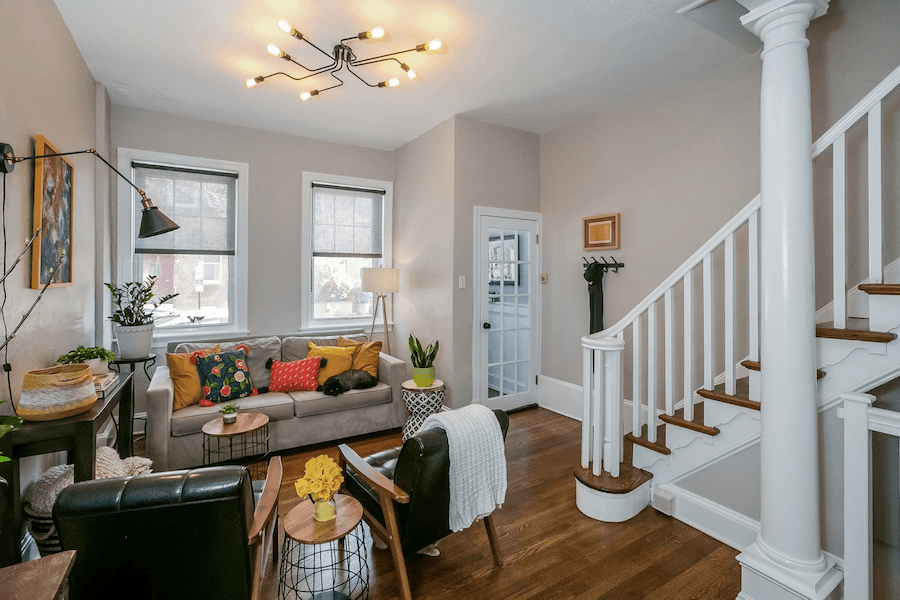 Starting with its living room. Looks like a million bucks, doesn’t it?

Maybe at this point, before you continue, you might want to jump down to “The Fine Print” at the end of this article. That’s because many of those generic rehabs sell for about what this one does.

Yet there’s nothing generic at all about this makeover. Instead, it shows what happens when you give someone with a little creativity and a good eye for original design a chance to play with an average renovation budget.

Yes, this house shares some things in common with many of those generic rehabs, like an open-plan main floor or subway tile in the bathrooms. Those things are purely coincidental. Everything else makes this house stand out from the crowd. 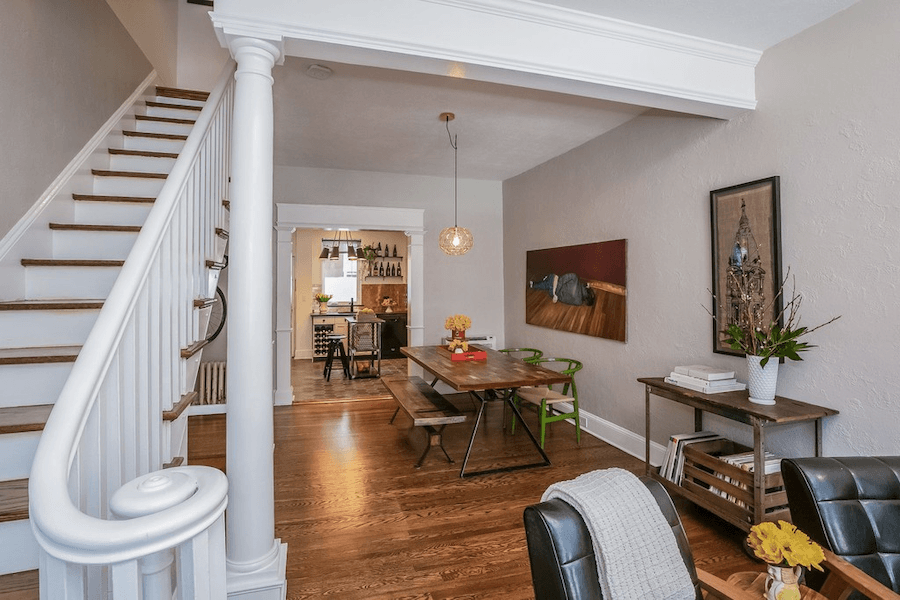 For starters, the main floor pays homage to this house’s early-20th-century roots with the traditional classical support beam and column separating the living and dining rooms, for instance. 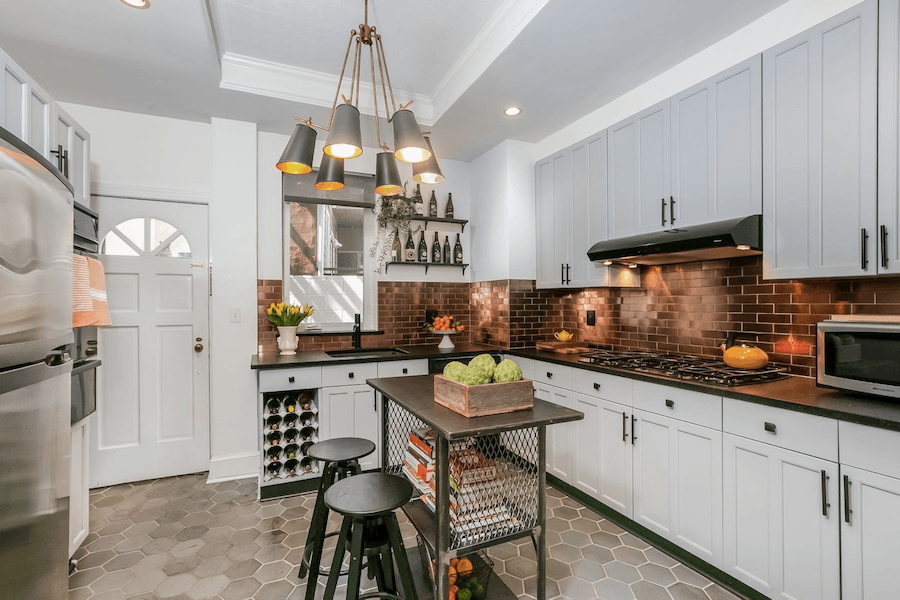 Ditto the tray ceiling in the kitchen, which is otherwise a very contemporary showstopper. Everything from the chandelier in the center to the brushed-metal-tile backsplashes to the metal-mesh island should tell you that the people responsible for this redo knew how to think outside the box when filling one. 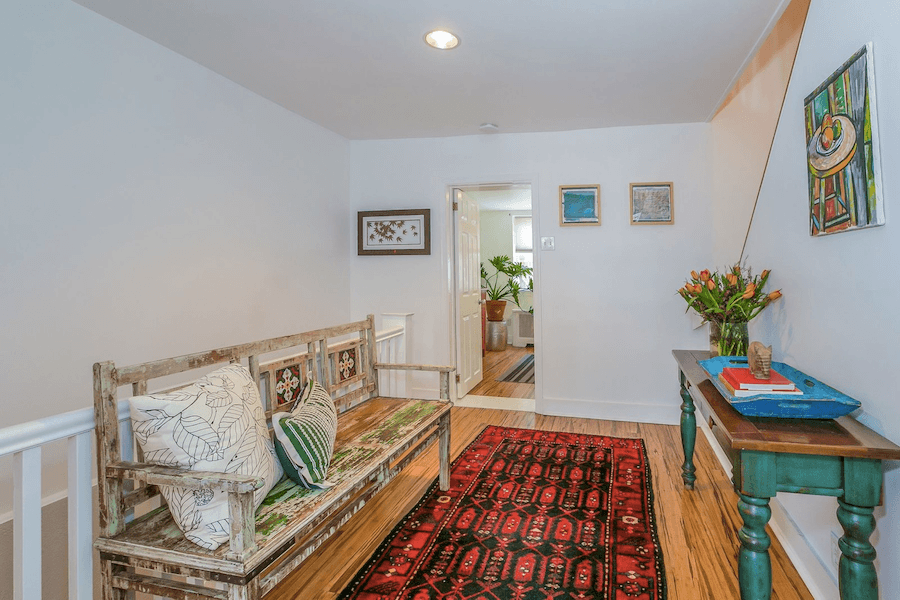 The location of the staircases gives this house another unusual element, namely, a large sitting area where the second-floor hallway should be. It also means this floor lacks something most have, namely, a bathroom, but the one in the basement more than makes up for it. Two bedrooms, one of which currently serves as a home office, flank this seating area. 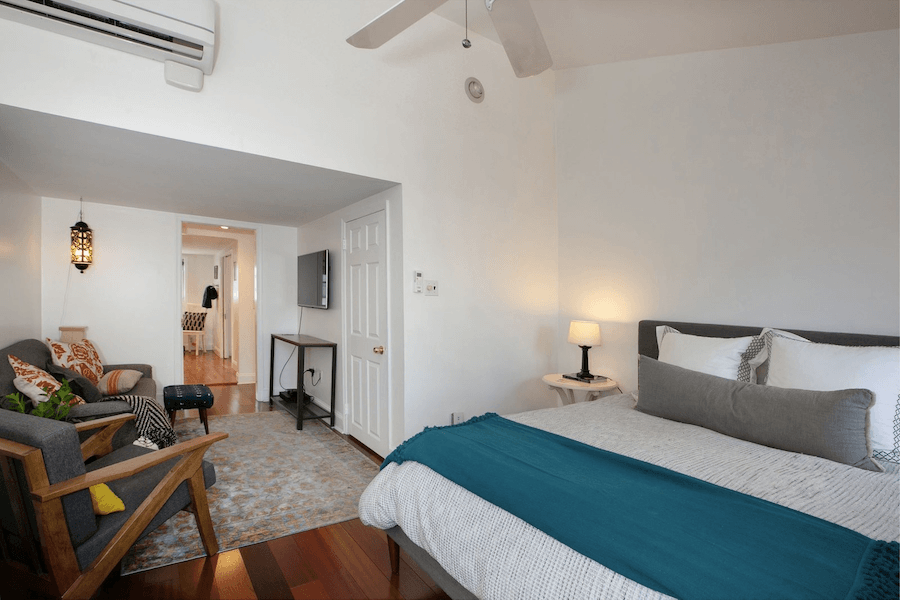 The top floor is given over to a most original master suite. Its bedroom has a vaulted ceiling, and the large closet and master bathroom share the rear half of the floor. 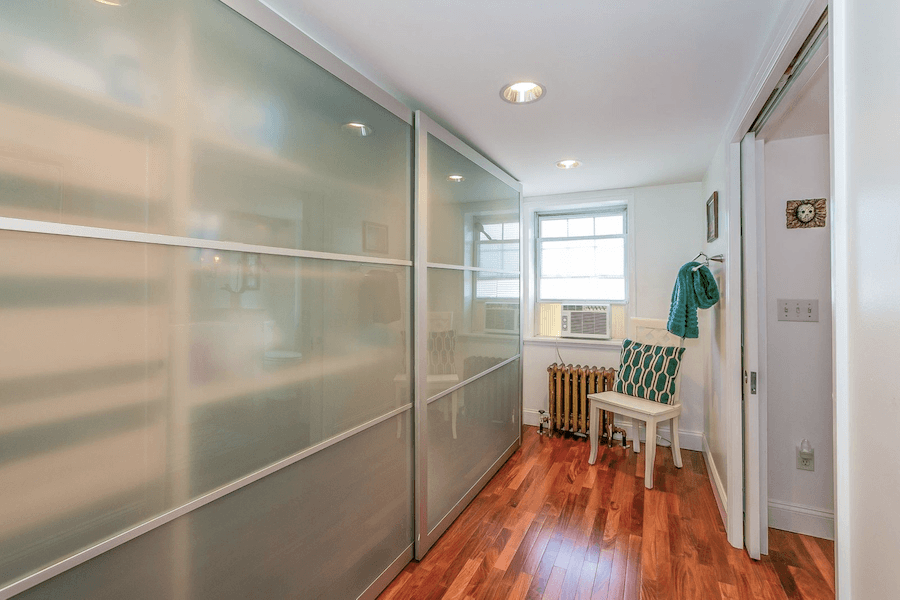 Both have doors that provide privacy and protection from moisture. The closet has sliding frosted-glass doors. 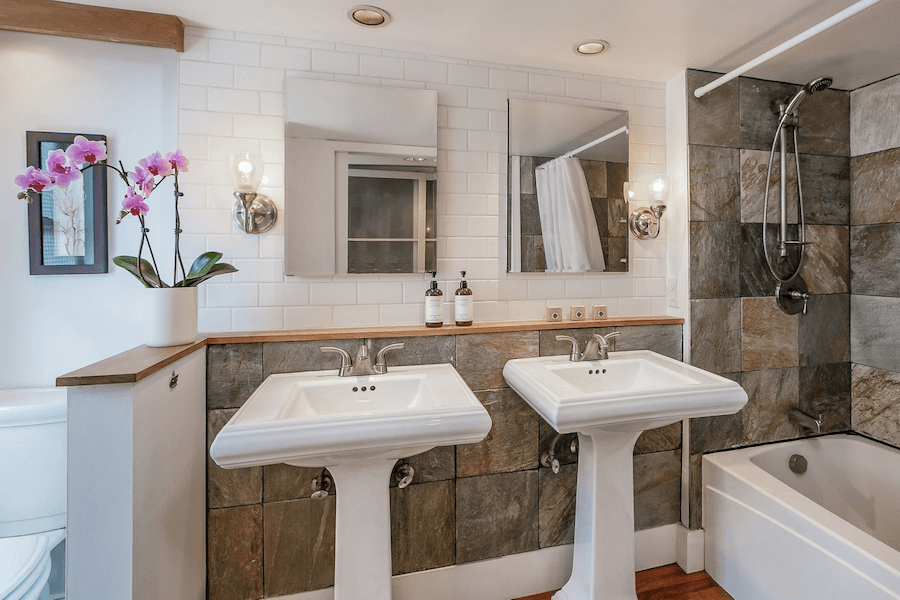 The bathroom has sliding pocket doors. And while it does have subway tile above the vanities, it has even more earth-toned stone tile. 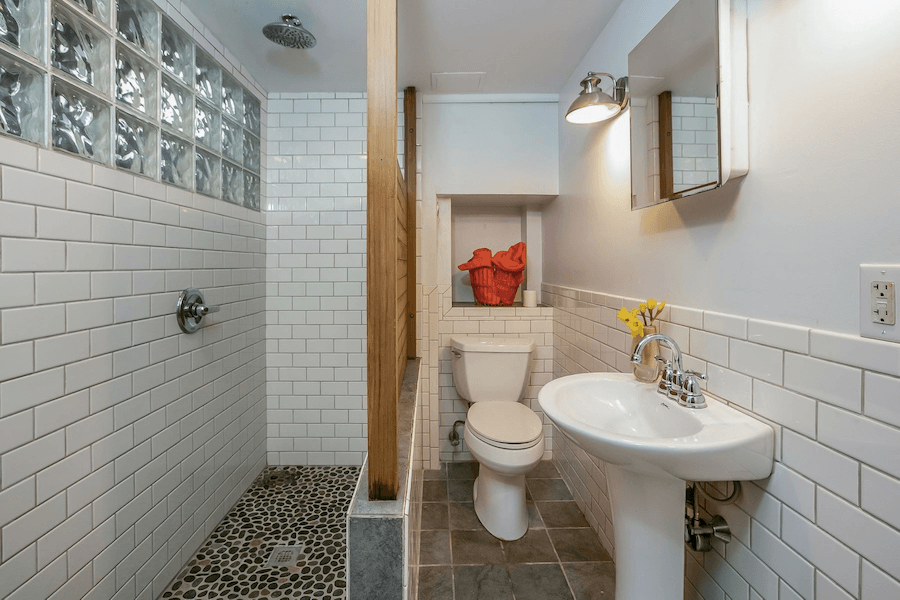 Everyone else will use the bathroom in the partly-finished basement. It too has subway tile in abundance, but it looks more like a Scandinavian spa than an American bathroom. 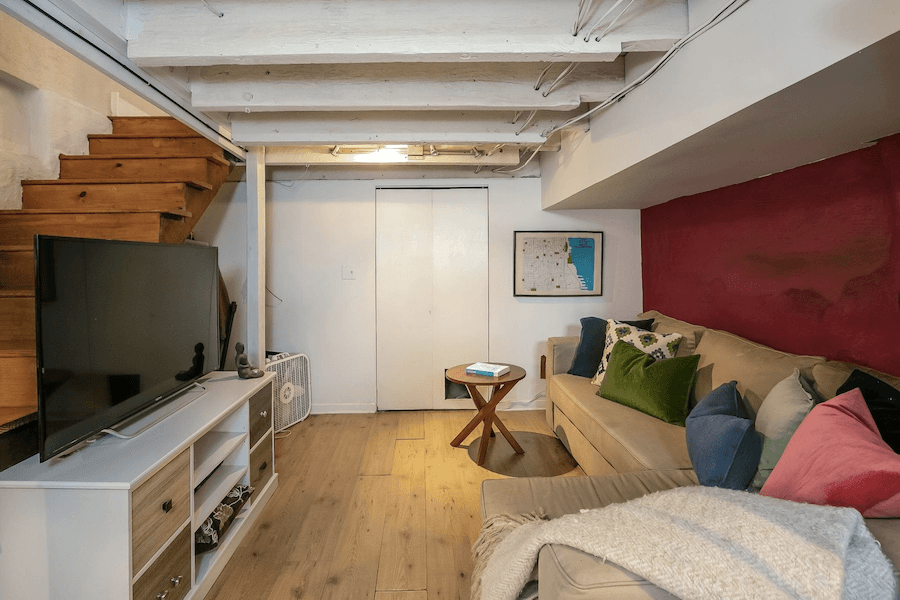 The basement also has a large space with an exposed-beam ceiling that makes a great media room or playroom. 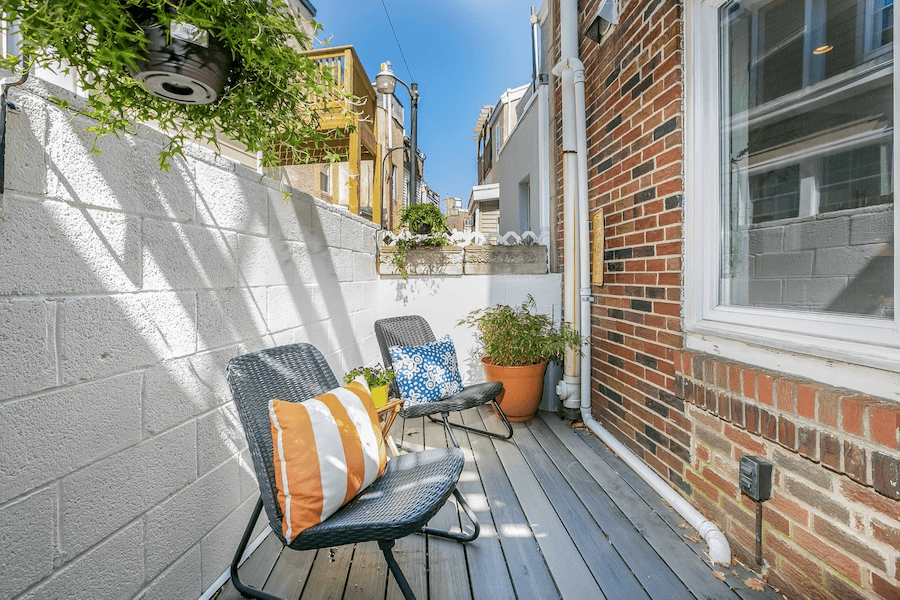 Even the small rear patio has more style and color than most spaces of its type, thanks in part to the plants that hang over its back wall.

You get all this fantastic style and design for what you’d pay for one of those generic-looking modern rehabs. And you get it in Queen Village, the neighborhood where people kill to buy houses in order to send their kids to the best public grade school in the city. (This renovated Queen Village rowhouse for sale lies in the district to that school’s south, but George Nebinger is no slouch either.)

Looks like a million bucks but costs nowhere near that. Looks smart as well as truly original to me. How about you?

OTHER STUFF: Mini-split air conditioners and a tankless water heater will save on your energy bills too. How smart is that?