This handsome Italianate twin, built during World War I, received a modern makeover that retains key elements of its original style. 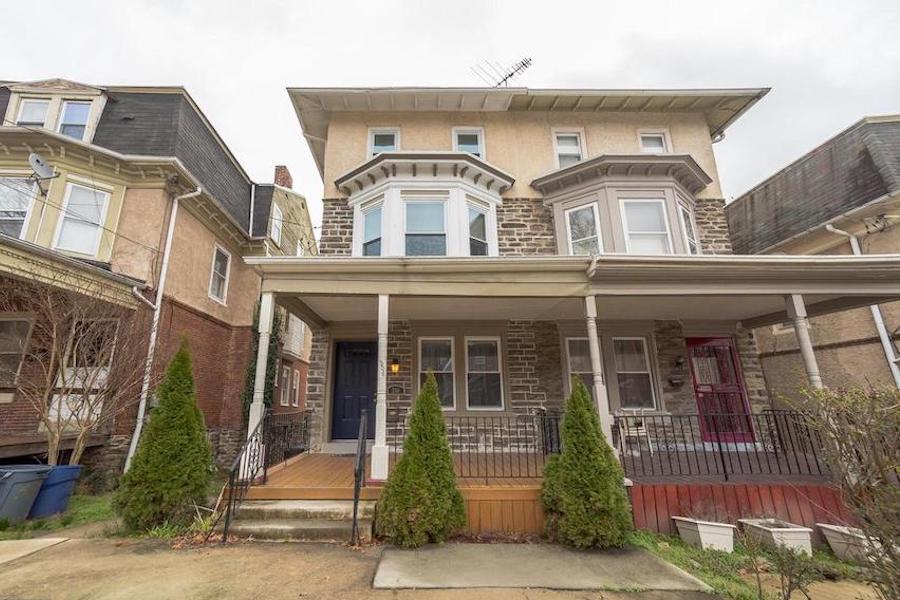 One half of this handsome 1915 Italianate twin just got a makeover; you should be able to tell which one. It’s at 336 W. Duval St., Philadelphia, Pa. 19144 | Bright MLS images via Rust Real Estate, LLC

If you haven’t copped wise to this yet, let me make it plain: I’m rooting for Germantown’s revival.

The second-most-historic neighborhood in Philadelphia, as a friend of mine put it a while back, “has strong bones.”

Just about all of the 60,000-plus residents of the city’s single most populous outlying neighborhood — big enough to have sub-neighborhoods within it — like living here as much as I do, and the statistics notwithstanding, they come from a wide range of backgrounds and demographics ranging from hardscrabble to affluent.

A lot of these residents have taken it on themselves to put muscle back on those bones, learning the ropes in programs like Jumpstart, the developers’ boot camp that originated in Germantown and has since spread citywide. 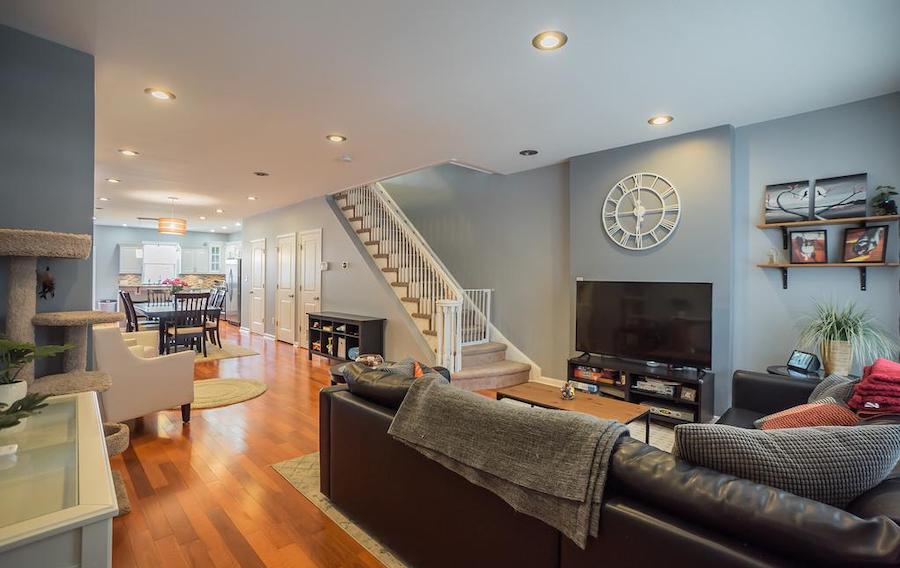 I don’t know whether the person who redeveloped this handsome Italianate Germantown twin house for sale in the neighborhood’s more affluent northwest quadrant is a Jumpstart graduate or not, but there are elements of this very attractive rehab that suggest to me that they also picked up some style lessons on their own. 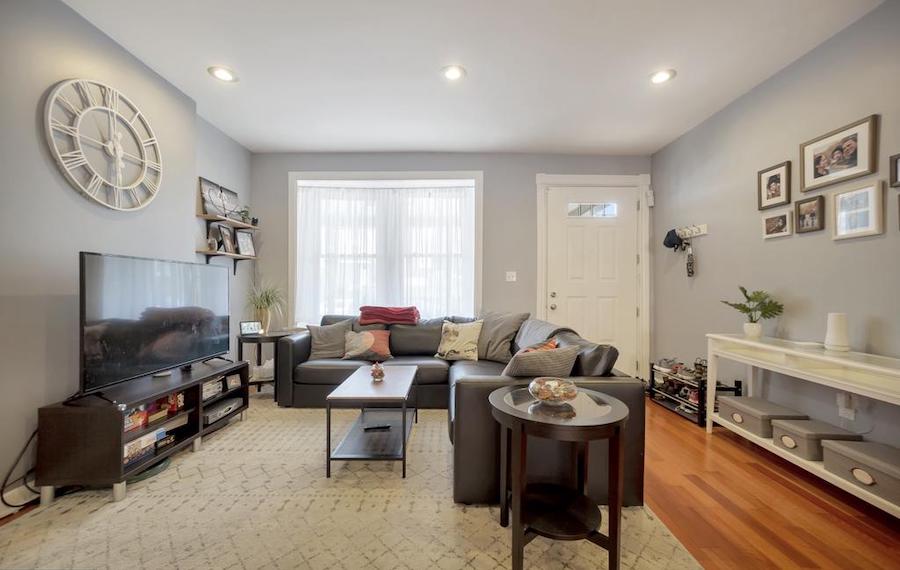 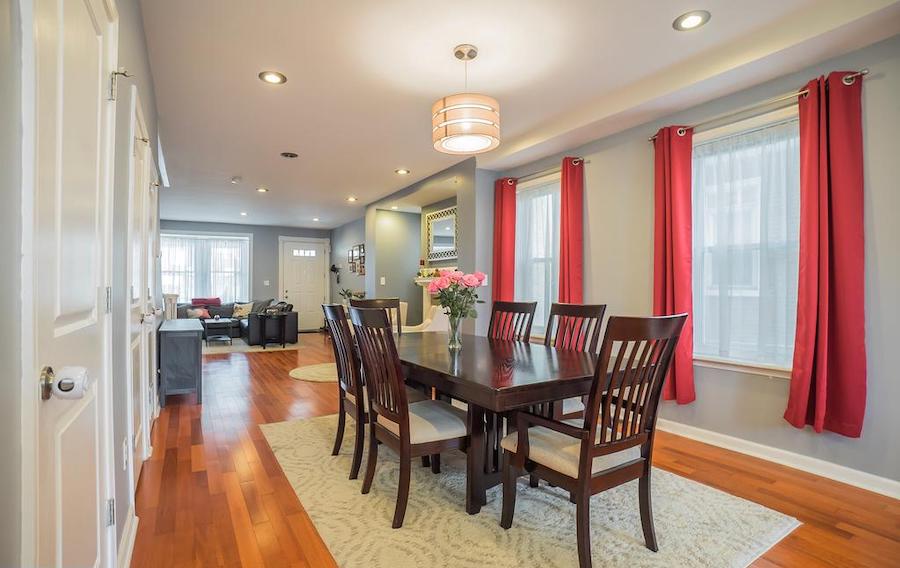 Lesson One: Ditch the battleship gray. You won’t find a lick of that done-to-death color inside this house.  Instead, the open main floor features a shade of gray that has undertones of blue, adding a bit of color to the reworked space. Most of the upstairs rooms are done in light shades of beige or off-white, and one of the third-floor bedrooms has an accent wall covered in birch-forest wallpaper. 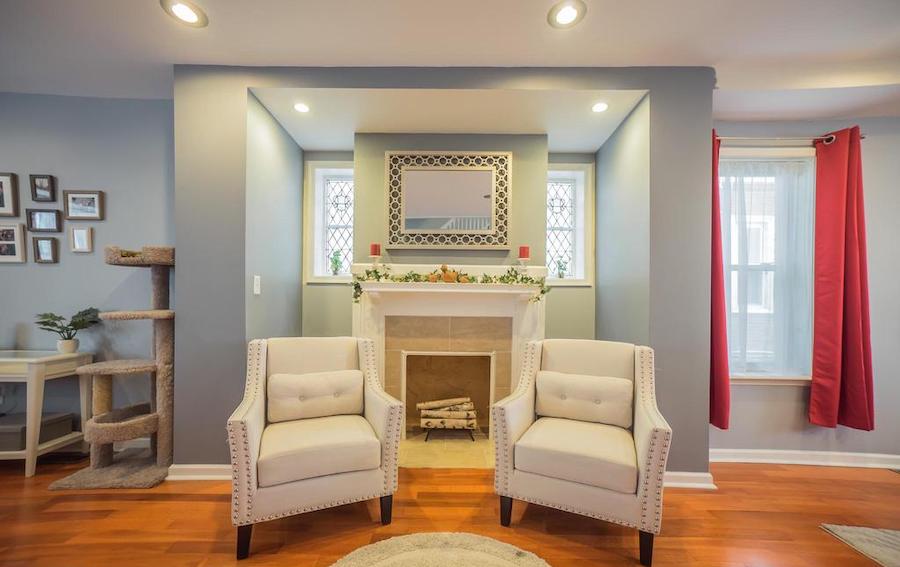 Lesson Two: Respect the past while designing for today. One very nice touch found in this rehabber’s job is the framing of the now-decorative fireplace in the main-floor living room. The renovation saved both the fireplace and the leaded-glass windows that bracket it, enclosing them in partitions that turn it into a stage set of sorts. 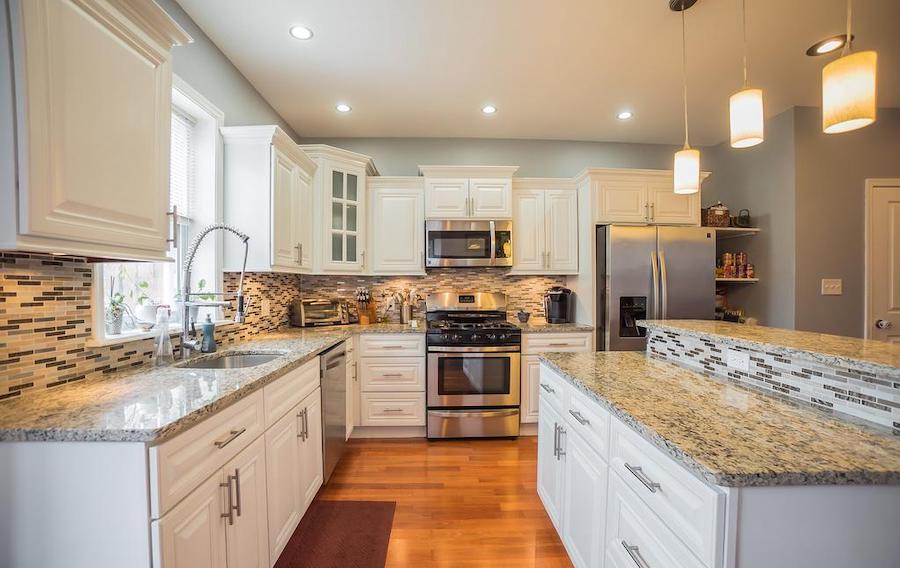 In a similar vein, the kitchen cabinetry recalls the house’s traditional architecture, and the glass-front corner china cabinet is a nice touch. 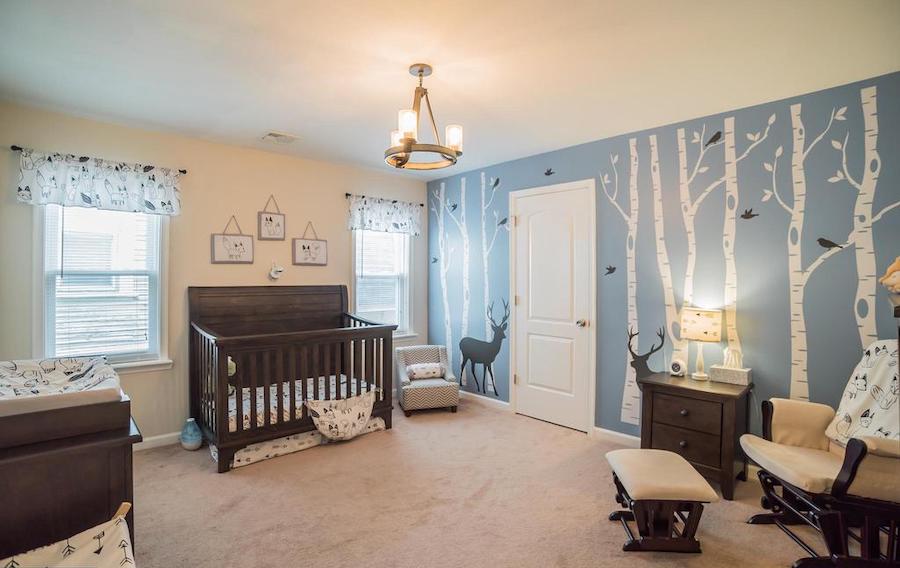 Lesson Three: Hire a stager or interior designer who can make the most of those unique features. Take a look at how the designer who outfitted this house’s interiors took advantage of that stage-set fireplace, for instance. They may even have suggested that wallpaper, given the choice of fabrics that adorn that bedroom’s windows and furniture. 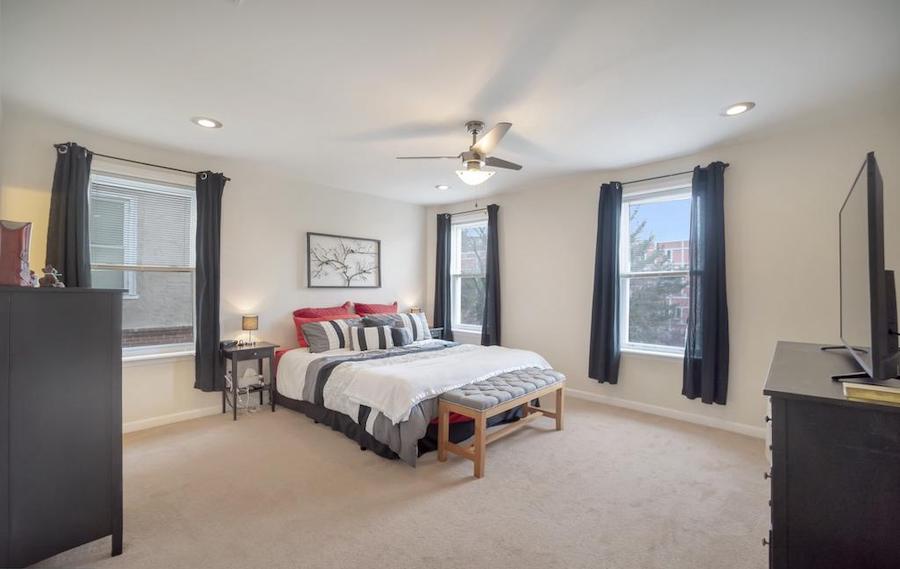 (By the way, there are five bedrooms in all, making this Italianate Germantown twin house for sale ideal for a growing family. The designer also signaled that with the furnishings in the third-floor den and that bedroom.) 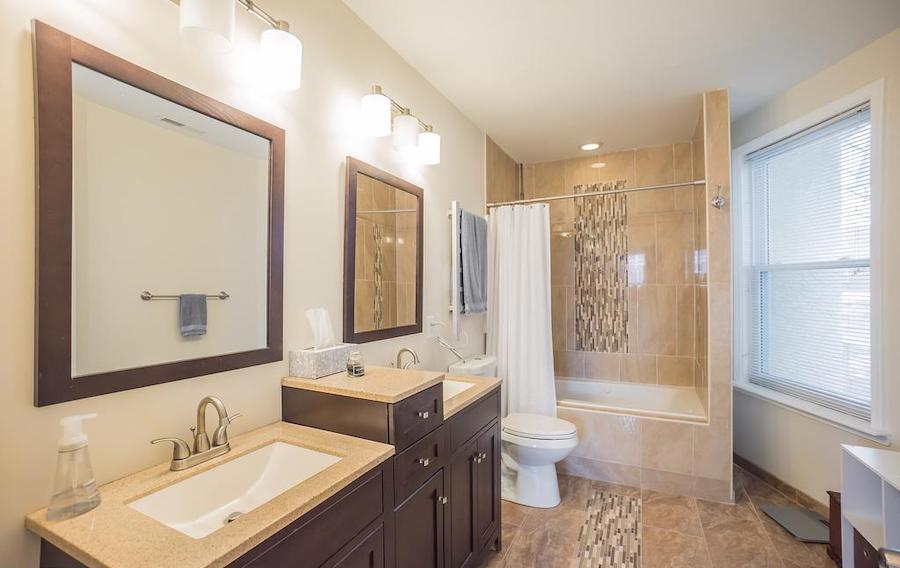 Lesson Four: Don’t cheap out. This being a mid-priced renovation, you’re not going to find deluxe features in it, but spending a bit more to offer a little something extra still helps. You’ll find that something extra in the second-floor master suite, whose bathroom includes a whirlpool tub. 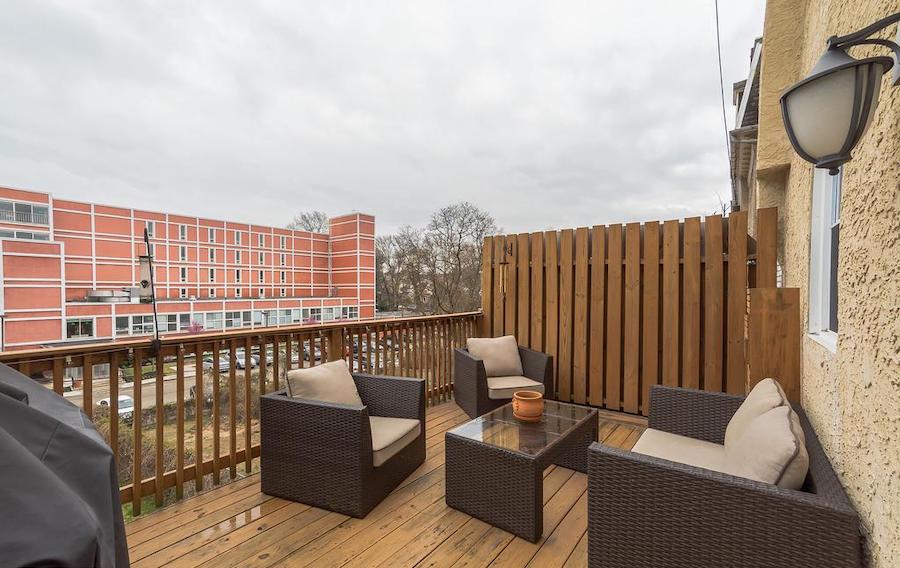 Some other nice extras include the deck off the kitchen, which makes indoor/outdoor entertaining easier, and the paver patio about one-third of the way back in this house’s deep backyard. You access that patio from the unfinished basement, which offers tons of storage space.

This house’s location near Germantown’s northwest corner puts you close to Tulpehocken Regional Rail station and the neighboring historic district of the same name. Neighborhood shopping on Chelten and Germantown avenues are just a little further away.

OTHER STUFF: This house also has parking for two cars on a pad in front. I’d be curious to know whether the rooftop TV antenna still works; while you wouldn’t get all the digital channels without a signal converter, it might be fun to get TV the old-fashioned way.