A paint manufacturer bought, then shut down, this old paintbrush factory in South Philly. A local builder then decided to use it as a blank canvas on which to create something distinctive. 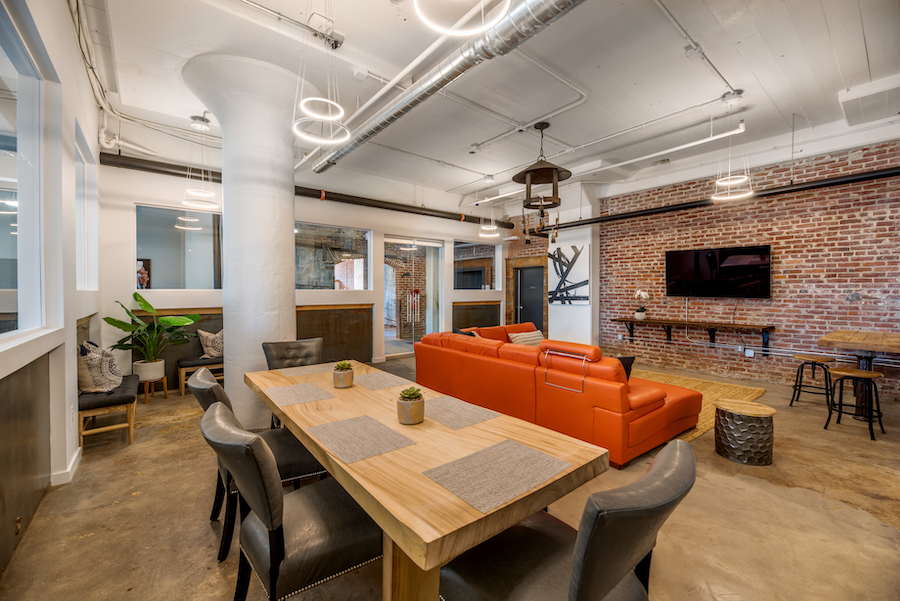 What made this old factory complex at 12th and Jackson streets in South Philadelphia a great candidate for conversion to apartments?

That’s exactly what builder/developer Anthony Rufo Jr. of The Rufo Companies did while working on a commercial construction project for the paint manufacturer in Conshohocken. 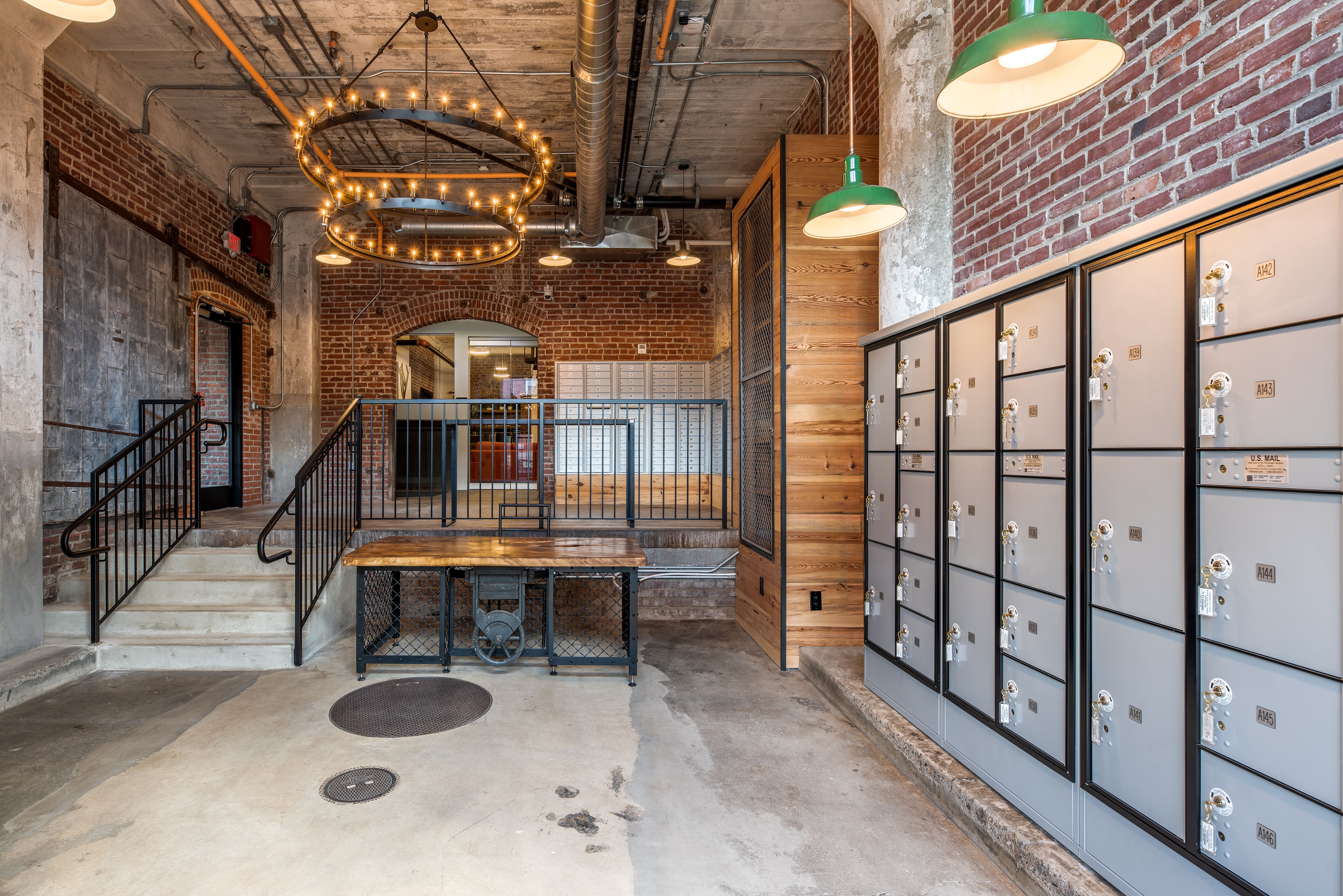 The lobby in Building 1

“Sherwin-Williams bought the building from a previous owner,” he says. “They thought they were going to make paint here, and that fell through. So when we were working with Sherwin-Williams, they approached my father and me to see if we wanted to purchase a building.” 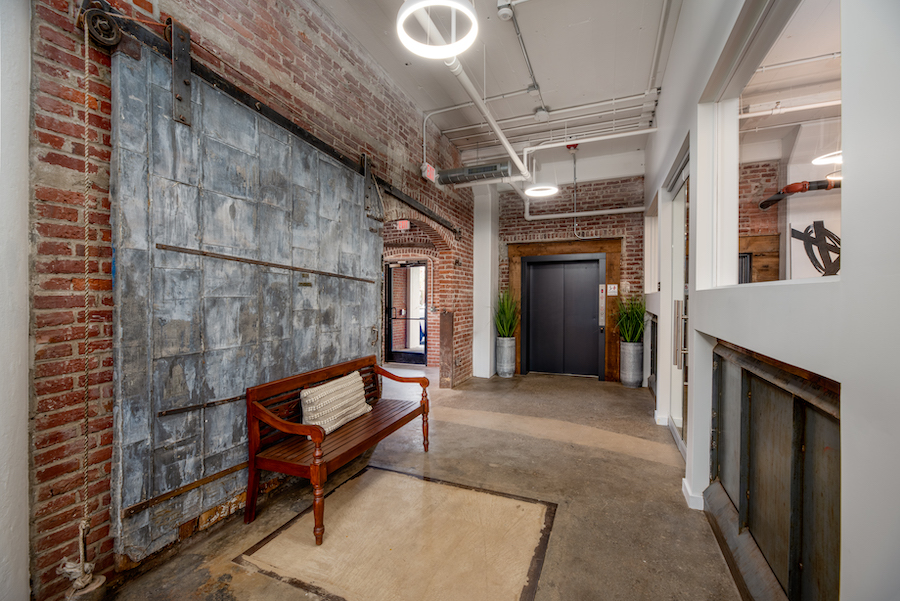 The elevator lobby between the lobby and the residents’ lounge. The door at left leads to the parking garage forecourt and will also provide access to Buildings 4 and 5

That was sometime after 2005, when Sherwin-Williams shut down the Bestt Liebco paintbrush factory at 12th and Jackson streets.

Founded in 1926 as Liberman Brush, the company built this building not long afterward. It acquired the Wisconsin-based maker of the first roller paintbrushes in America, Bestt Rollr, and took its present name in 1969. It wound up in Sherwin-Williams’ hands in 2004; the following summer, Sherwin-Williams closed the old original plant. 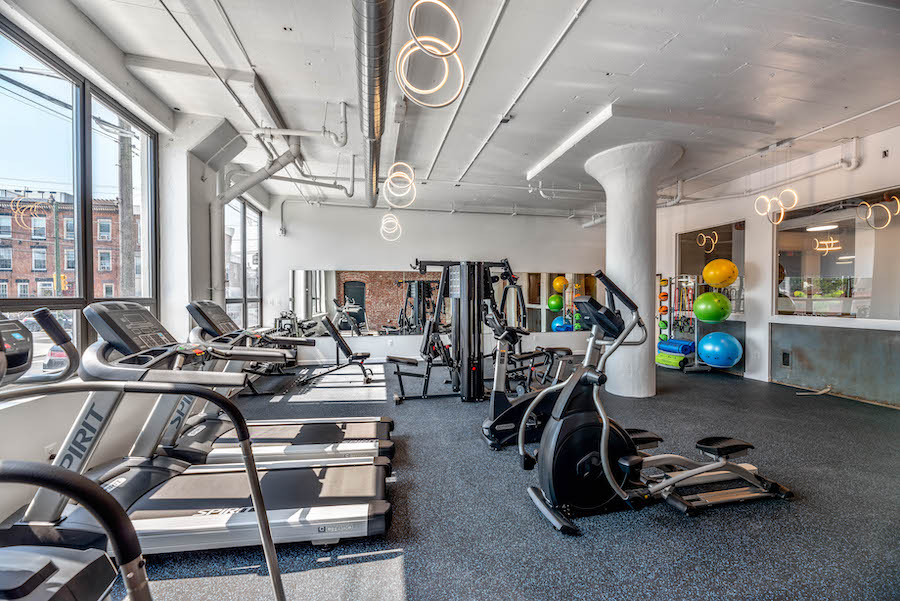 And there it sat until Rufo got those feelers from Sherwin-Williams. The sale went through in 2007.

By that time, the building had gotten the standard paint job applied to Philly’s abandoned industrial buildings. “It had tons of graffiti,” says Rufo. “On the inside and on the outside.”

But, he says, “structurally, the buildings were in great shape.”

In contrast to some developers who have reclaimed abandoned factories, Rufo got rid of all the tags. He then set about turning this complex of five buildings into a one-of-a-kind rental apartment complex. 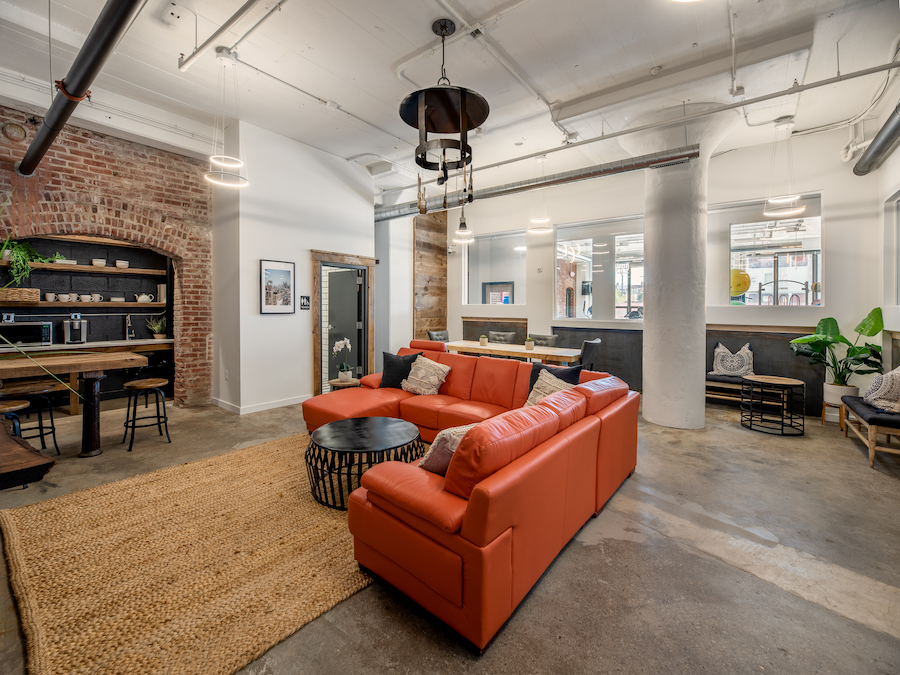 The residents’ lounge, showing the coffee bar, with the fitness center visible through the windows in the rear

In so doing, he left copious reminders of the building’s past other than the graffiti. For instance, what looks like a chandelier in the residents’ lounge is actually a hanging sculpture featuring old paintbrushes. 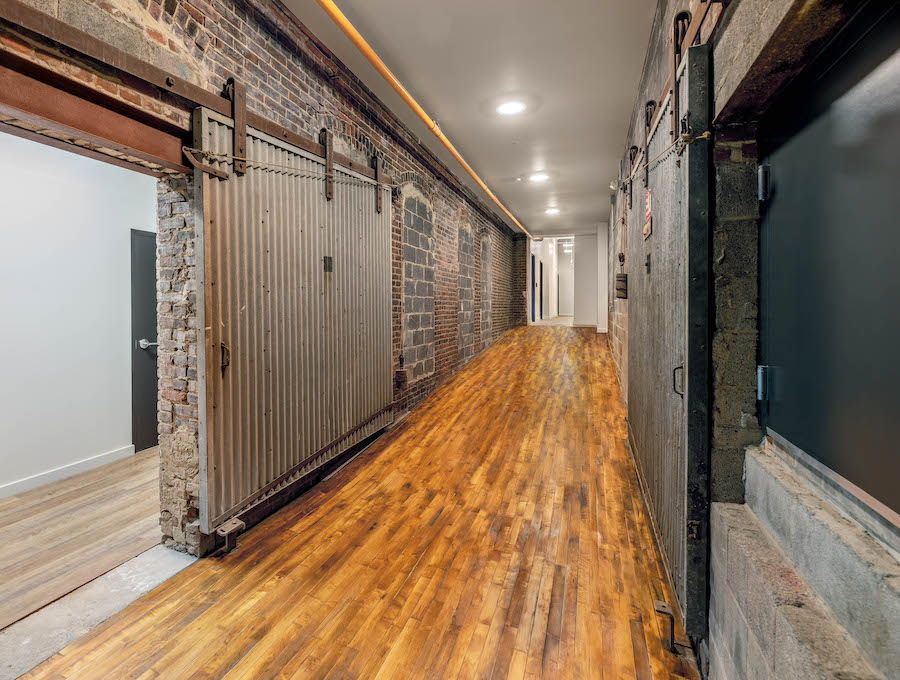 Some of the original fire doors in the factory have also been retained.

And the building’s industrial heritage also served as inspiration for a number of unique design touches in this apartment complex. 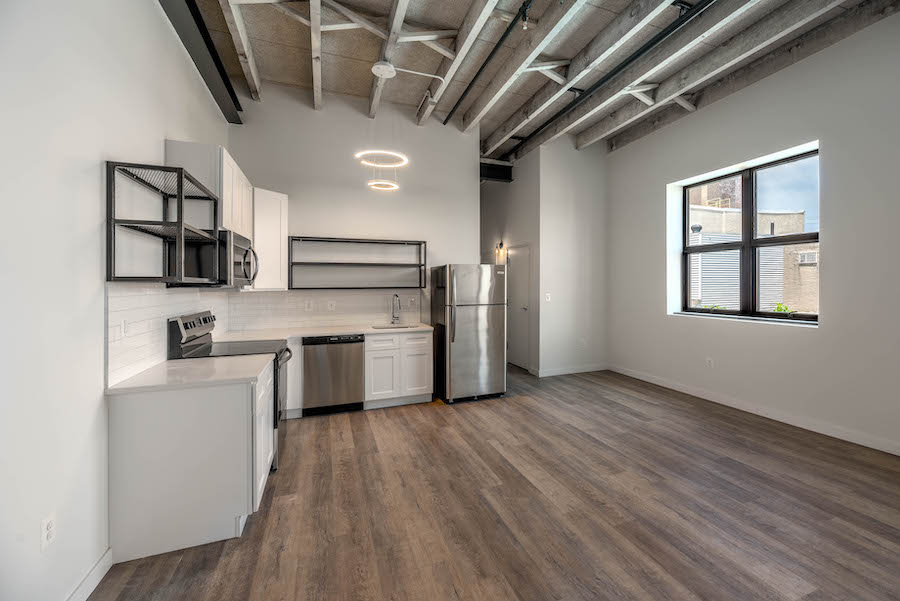 An apartment in Building 1 with an exposed-beam roof. All the kitchens have industrial-style metal shelves in place of most of the cabinets.

One of the most noticeable ones: Metal shelves where one would expect to find cabinets in the kitchens. Distinctive LED lights hang down from the high ceilings in the kitchens in Building 1, the original five-story factory building. A three-story wing attached to the building’s north side is designated Building 2, and a two-story wing next to it is Building 3. 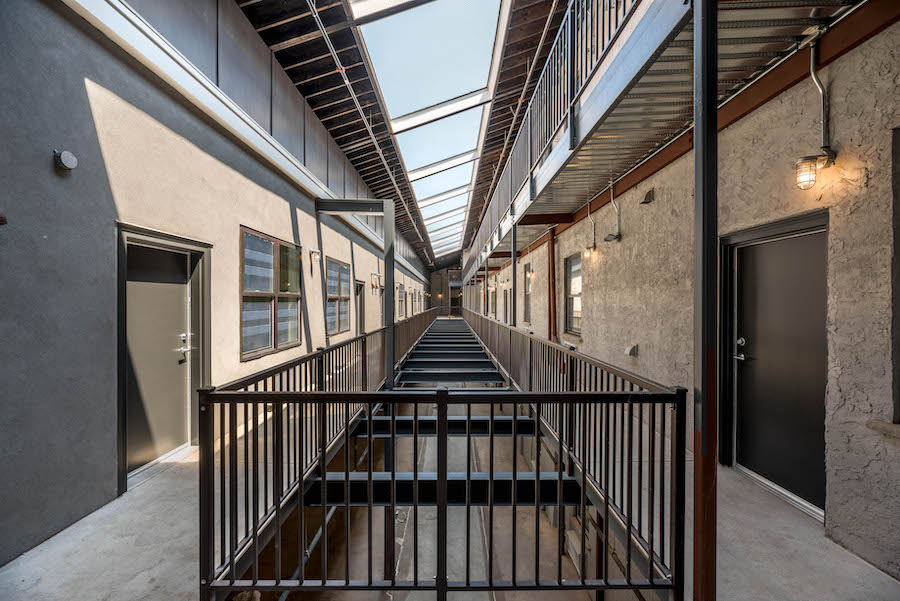 The open-air atrium hallways between Buildings 2 and 3

Between these two wings, a courtyard partly open to the sky contains the balcony corridors for the upper-floor apartments, giving this part of the complex more of a Sunbelt feel. 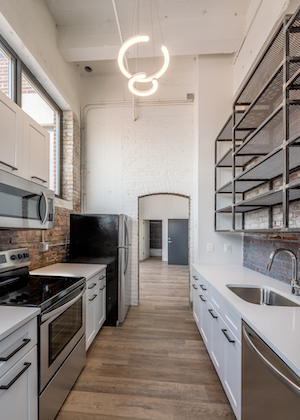 A galley kitchen in a Building 1 apartment

Because of the buildings’ footprints, the apartments have some unusual layouts and dimensions. Four of the apartments in Building 1, for instance, have galley kitchens that project out from the main part of the building, filling a small protrusion in its otherwise square footprint. And most of the first-floor units on the 12th Street side of Building 2 have their bedrooms in their basements. The various architectural elements left in place make no two apartments exactly alike.

This project was actually 12 years in the making. The Great Recession hit not long after Rufo purchased the building, putting their plans for the conversion on hold. There they remained for eight years until they received the zoning variances Rufo needed to proceed in 2015. 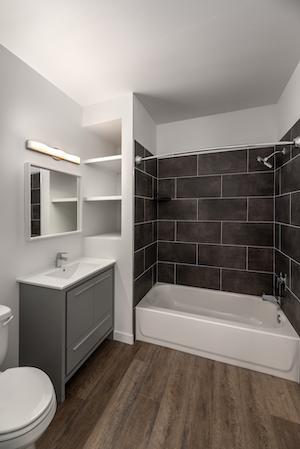 “The neighbors were excited to see something happening with the building,” Rufo says about their response to his company’s variance petition. “Of course, in South Philadelphia, they had parking concerns.”

The neighbors would have preferred the building to have a parking space for each unit, but the city’s revised zoning code made that no longer necessary. Instead, Rufo is providing 65 spaces for what will be a total of 150 apartments when the second phase of the project wraps up in a few months.

And, Rufo says, no more spaces are needed.  “We’re seeing from what we’re leasing now that about one-third” of the residents bring cars with them. 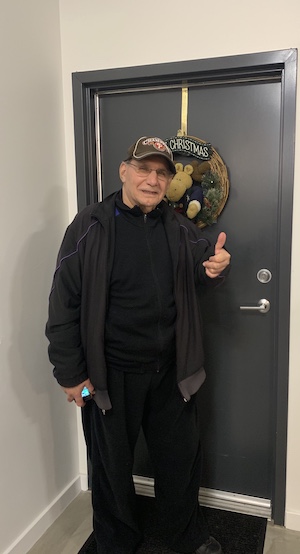 One resident who didn’t is Charlie Porco, who Rufo calls “the building ambassador.” Porco lived across the street from this building for 47 years until he decided to sell his house and move in.

“My wife passed away 18 years ago, but I stayed in there,” says Porco, who is 75. But, he went on, his niece began to worry about his health. “I said I only needed one floor. I can’t go up and down these steps no more. So I sold it and moved in.”

The 60-unit first phase of the project welcomed its first tenants last fall. Work on the larger, 90-unit second phase is nearing completion and leasing is now underway; this phase also adds a green roofdeck to the complex’s amenities. Rufo says the first tenants should start moving in next month.

Brush Factory Lofts by the Numbers

Number of parking spaces: 65, all in a covered garage; spaces available for $200 per month.