A recent makeover Colonialized this 1954 Cape Cod-style house in the historic postwar suburb. 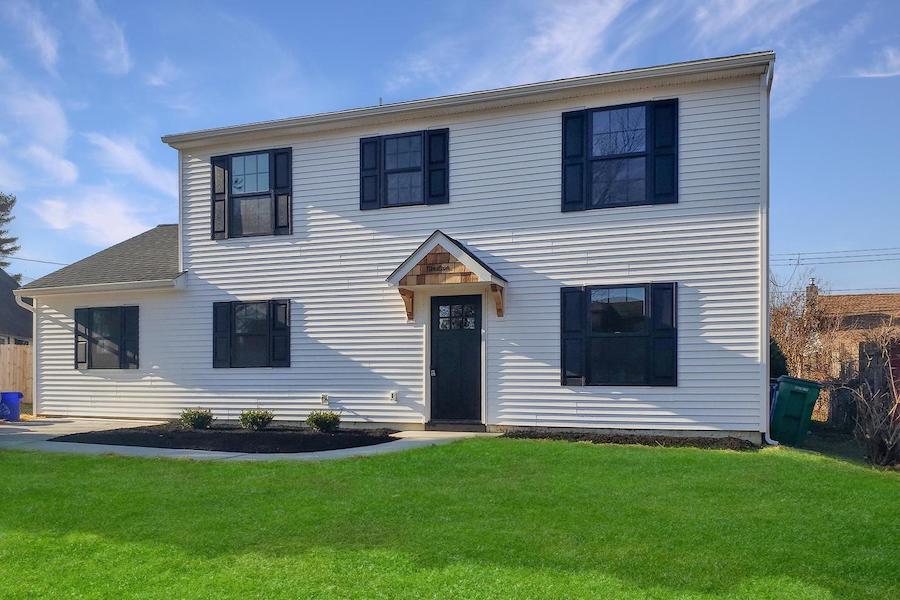 The Levittowns — seven of them were built between 1947 and the mid-1960s, most not with that name — revolutionized American suburbia. By adapting assembly-line production methods to site-built housing, Levitt & Sons built communities that housed tens of thousands quickly at affordable prices.

A total of 17,311 houses were built in Levittown, Pa., the second and most populous of the Levitt communities. And just as Henry Ford made autos accessible to the masses by banishing customization, so Levitt made housing affordable to the white GIs returning from World War II by producing these houses in only six basic models and banishing customization. But Levitt wasn’t as restrictive as Ford: each of the company’s six models came in up to four different style variations.

Nonetheless, the houses were offered as a package, take them or leave them. But as time passed, the human desire to stand out from the crowd ultimately triumphed over the uniformity of mass production. As Levittown aged, homeowners altered and added to the basic models, often transforming them into houses radically different than the ones they bought.

This house for sale is one of the most recent examples of the impulse to transform. And as with many of the others, it’s almost impossible to trace it to its origins.

Almost. I’m taking a stab at it anyway. 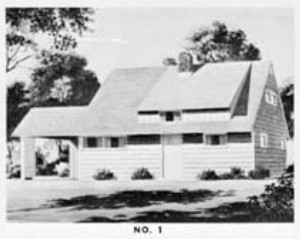 Rendering of style No. 1 of the “Rancher” model, from a 1954 Levitt promotional flyer | Flyer: Levittown Regional Library collection via the State Museum of Pennsylvania exhibit “Levittown: Building the Suburban Dream”

This house sits in the Indian Creek section of Levittown. House construction began there about 40 percent of the way through the project, in 1954. According to Levittowners.com, a historical website developed for Levittowners by Levittowners, houses in this section came in three models: the Levittowner, the Jubilee and the Rancher.

The Levittowner was the first and most contemporary of the three models. This house looks like it began life as a Rancher model, the second to be introduced to the Pennsylvania Levittown. Contrary to its name, the Rancher had two floors and more closely resembled a Cape Cod house in plan and appearance. 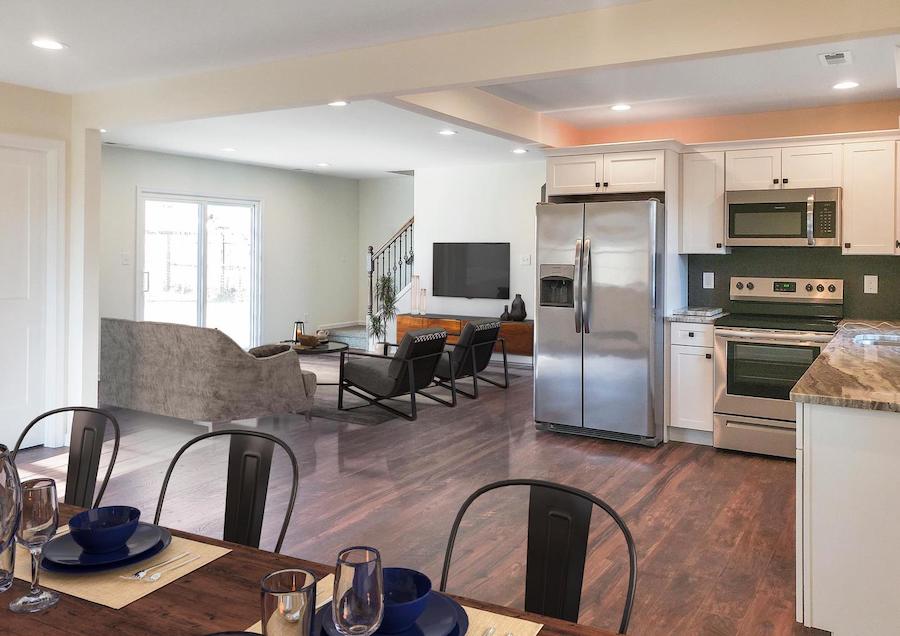 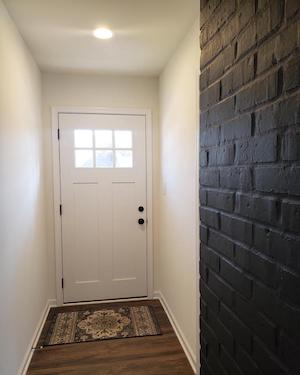 Like most Levittown houses, this model had an open-plan main living area with the living room at the rear, a precursor to the family or great room/casual dining room/kitchen combo I refer to as the “everyday living suite.” But unlike with most of them, the Rancher has a narrow entrance hall leading past a bathroom to the main living area.

That lends this model to the Colonialization it received.

Judging from the illustrations of this design, this was one of the first variations on the Rancher. That first version featured a low dormer in the front. As you can see here, the makeover removed the dormer and replaced it with a full second floor in front, making its front elevation look as though it has a flat roof. 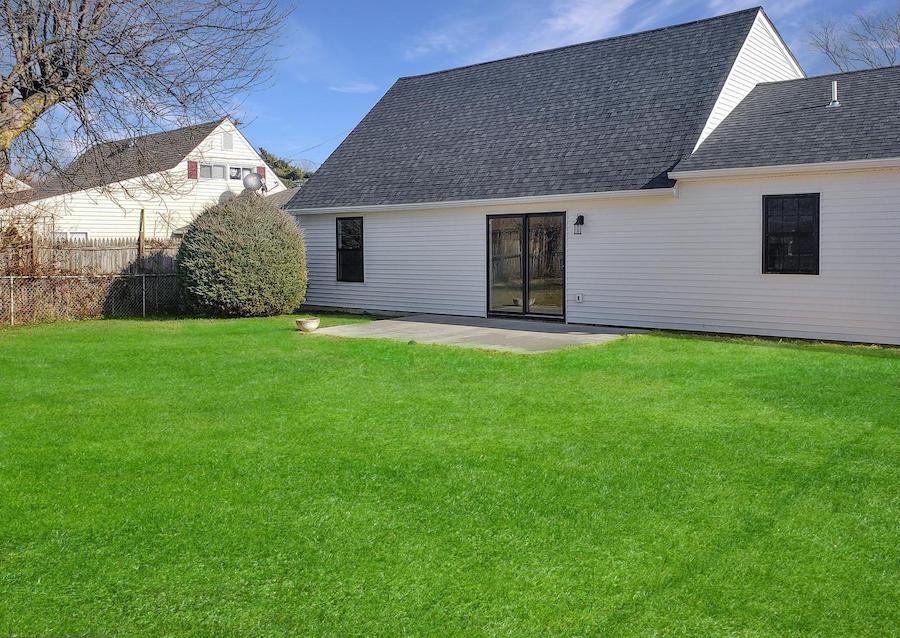 Rear exterior. The original rear elevation had a large nine-paned picture window where the sliding doors are now.

It doesn’t, as the rear elevation makes clear. The exterior remodeling also enlarged the main-floor front windows, replaced the front door with a Craftsman-style one and added a portico with cedar shingles. 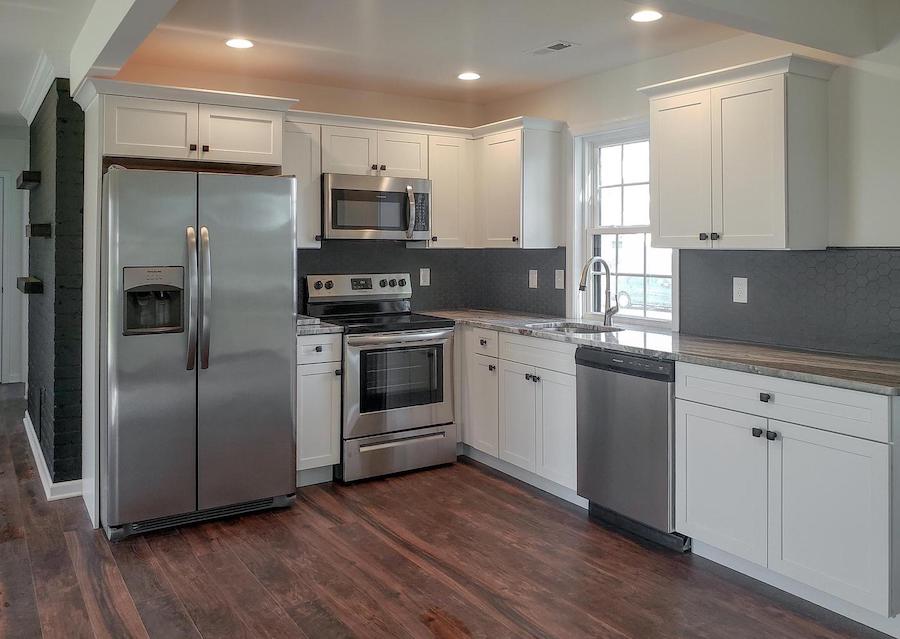 Inside, the house got a total updating that replaced its kitchen with a more modern one with granite countertops and stainless steel appliances.

What had been the carport became the dining room and a laundry room. 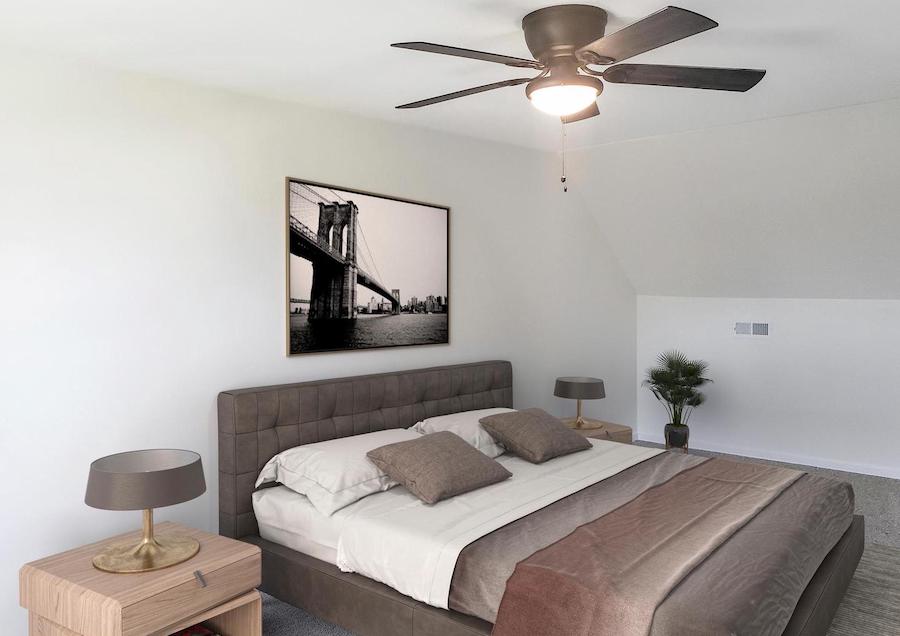 The expansion of the front dormer turned the one upstairs bedroom into two. It also gave both higher ceilings and allowed for the creation of the large master bedroom shown here.

One of the other changes that turned this Cape Cod “Rancher” into more of a Colonial: replacing the small horizontal casement windows with larger, traditionally styled multi-light ones. As these are also double-paned, they also make this rebuilt house for sale more energy-efficient. So do the ceiling fans in every bedroom.

As Levittown had budget-conscious buyers as its target market, so this reconstruction also aims for affordability. The floors are a wood-look composite rather than real hardwood, for instance, and the Shaker-style cabinets in the kitchen and bathrooms are basic quality.

Nonetheless, this house shows just how dramatically the people who have bought Levittown houses over the years have changed them to suit their tastes. Those “little boxes made of ticky-tacky” derided in song have turned from cookie-cutter symbols of conformity to expressions of individuality.