The Rise of Dorm Life for Adults

Entrepreneurs are putting a fresh gloss on the old rooming house and calling it “co-living.” Here’s why that’s a smart move. 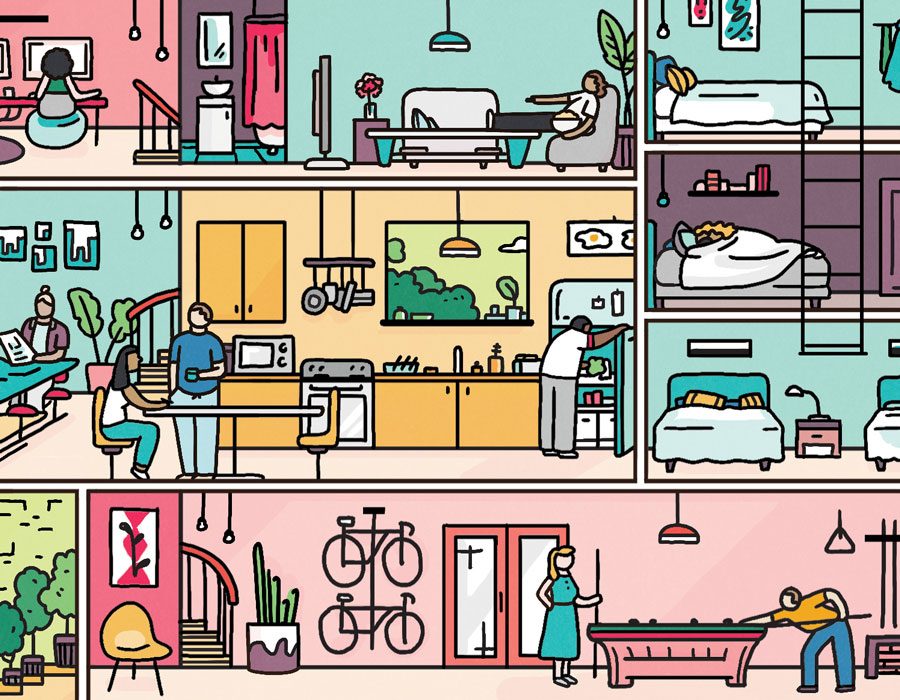 Entrepreneurs are putting a fresh gloss on the old rooming house and calling it co-living. Illustration by Kati Lacker

Around the turn of the last century, new arrivals in big cities like Philadelphia found shelter and instant community in rooming houses — places where they could rent a room and share common facilities.

That style of living eventually faded out of fashion. But now, a century later, housing affordability is becoming an urgent issue, and a fresh generation of tender graduates is looking for reasonably priced lodging. Guess what’s back?

Yep, the rooming house. Only this time, it’s got a shiny new label: “co-living.”

This dressed-up version has its roots in another recent phenomenon: individuals seeking roommates to share the cost of an apartment well into adulthood. But where hitching up with roommates involves acquiring furniture, sharing trash responsibilities, and conducting interviews that resemble first dates, co-living facilities take care of all that stuff for you. And they toss in wi-fi, utilities, cleaning of shared spaces, kitchen supplies, and Instagram-friendly furnishings.

Why Affluent Philadelphians Are Choosing to Rent Instead of Buy

Turns out a lot of people are looking for this kind of living arrangement: “About 25 million Americans live with roommates,” says Brad Hargreaves, CEO of Common, one of two co-living companies setting up shop here. That’s a 20 percent increase over the past 10 years, he adds.

It’s a worldwide trend, explains Gunther Schmidt, CEO of the German-based parent company of Quarters, a co-living company currently building a facility in Northern Liberties: “In Europe, in all the major cities, prices are going up, and people are looking for ways to make it more affordable.”

What Quarters and Common have in common: They’ve figured out how to create stylish spaces at reasonable cost. (Shared kitchens are a big money-saver.) A studio at Common Frankford, for instance, will rent for under $1,000 a month. A new studio anywhere in greater Center City typically runs about $300 more. And because both firms operate facilities in several cities, footloose tenants will be able to inhabit units here or elsewhere with leases as short as three months. “You have the services included, you have the social network included, and if you don’t like it, you can move on,” Schmidt says.

Published as “Dorm Life for Adults” in the October 2019 issue of Philadelphia magazine.