According to an Apartment List report that found that nearly 40 percent of all out-of-towners looking to rent here recently live in the nation's capital. 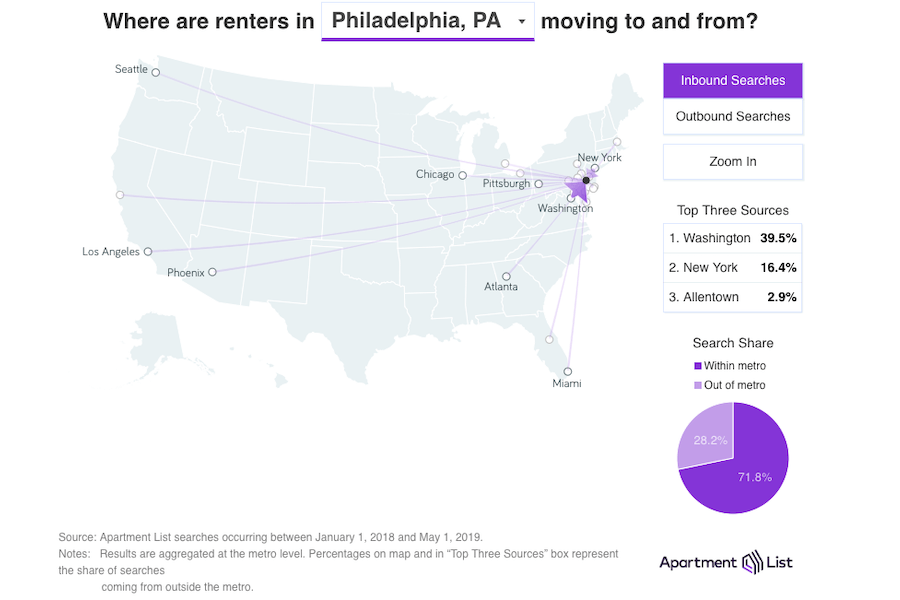 The map above shows all the cities that account for one-half percent or more of inbound apartment searches for Philadelphia conducted on Apartment List over a 15-month period that ended in May. | Apartment List graphic

You’ve probably heard Philly referred to as the “sixth borough” in reference to the number of New Yorkers who have chosen to make the city their home. (And if you’re like many Philadelphians, you curse when you hear it.)

But believe it or not, according to the Apartment List search site, New York is not the city that’s producing the highest number of new Philadelphians — or at least those new Philadelphians looking for places to rent. Apartment List’s first “Renter Migration Report” found that 39.5 percent of all out-of-towners looking for apartments in Philly are searching from Washington.  That’s more than twice the percentage of would-be renters looking to move here from New York (16.4 percent). And that’s more than 13 times as many people as are looking from Allentown, the No. 3 city on the inbound search list.

Apartment List analyzed location data for users conducting searches on its site from January 1st of last year to May 1st of this one to come up with its figures.

There are a few main reasons why young people from the capital might be attracted to the City of Brotherly Love.

First and foremost, the lower cost of living is likely the strongest driving force behind this particular migration. The most recent rent data from Apartment List show that the median apartment rent in DC is 38 percent higher for a 1-bedroom apartment and 32 percent higher for a 2-bedroom unit than in Philadelphia. What’s more, rents are rising faster there: 2.3 percent over the previous year vs. a mere one percent in Philly, a figure below both the state and national figures.

Igor Popov, Apartment List’s chief economist, explains, “When a renter imagines ‘What kind of place and lifestyle could I get on my salary?’, they are likely to have a positive reaction to Philadelphia.”

The typical apartment renter tends to skew younger — early 20s to early 30s — due to a myriad of factors, including the burden of student loan debt. Young people today prefer to live in a city where they have everything they need within close proximity. They want to live in an area that provides them with amenities the moment they step out their front door. Walkable Philly neighborhoods like Fishtown, Bella Vista, and University City are riddled with restaurants and coffee shops aplenty. Not to mention how easy it is to travel between them, thanks to SEPTA.

Live here, work at your DC job from home

Another less considered reason that renters are making this move is actually to keep their jobs in DC, commute down from Philly a few times a week, and spend the remainder working from a considerably cheaper home. Mike McNelis, CEO of The Philly Apartment Company, says that this is something he sees often. He pointed out, “If [renters] are saving a couple thousand a month by living here, commuting makes sense for them. An Amtrak to DC can get you there in two hours or less, and you’re not dealing with traffic.” Some companies offer travel stipends in these situations.

For a growing number of young professionals living in Washington who want to stay on the East Coast, remain in a more walkable city, pay less to rent an apartment, and still cheer on Bryce Harper, it looks like moving to Philadelphia is the answer.