On the Market: A Holy Trinity, Revised, in Moorestown

Most of the features the couple who bought this historic house in 2004 put into it survive. Its current owner decided to lighten things up a bit, however. 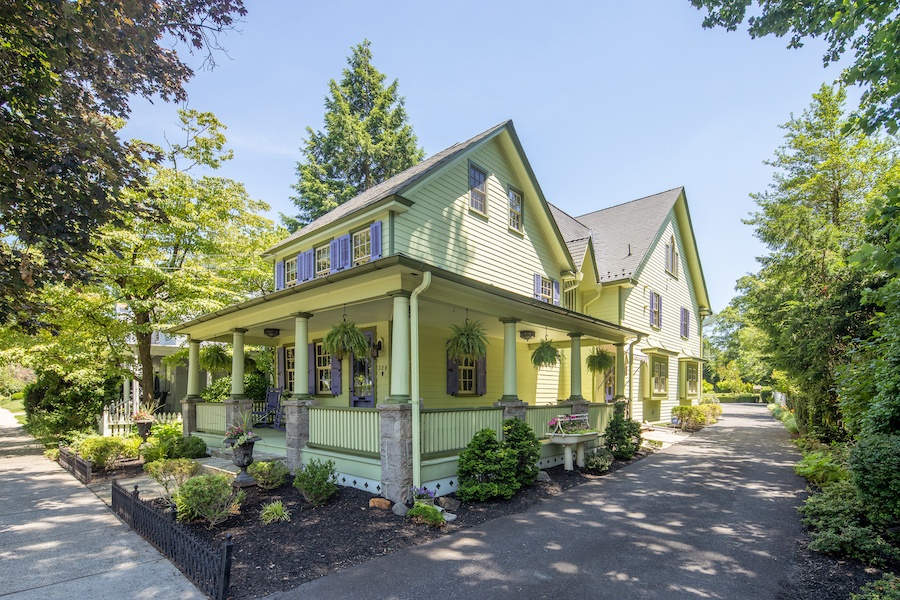 When last we featured this truly unique expanded trinity in Moorestown five years ago, a couple with a clear love for both the circus and Gothic architecture had transformed it into a carnival of color, filled with a mix of old and new Gothic elements.

The couple who brought the house back then is now ready to sell it. Which means we get another pass at it now that it’s once again a house for sale. 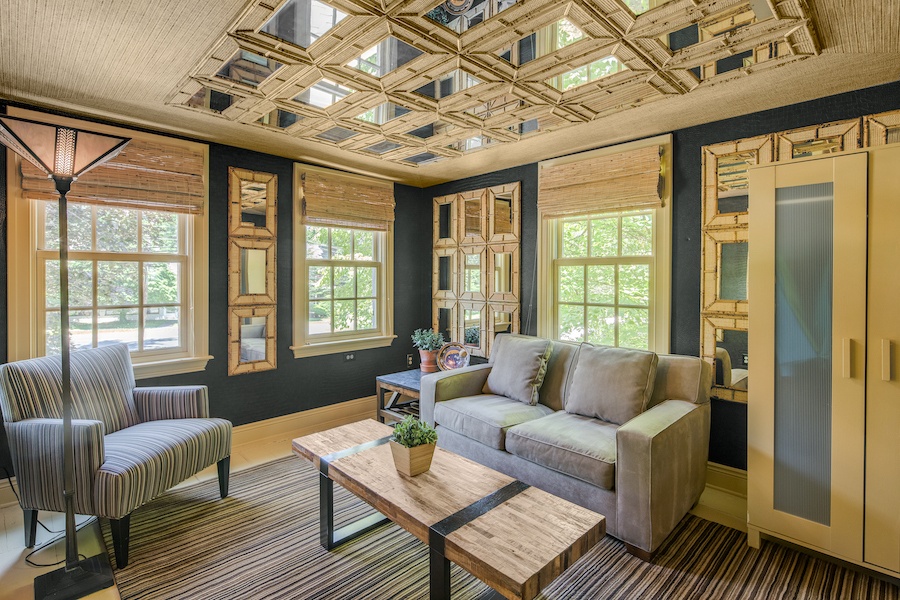 The good news is, it remains a one-of-a-kind house filled with original style. But the carnival has mostly packed up its tents and moved on, so to speak. If you’re Henri David, you might not like what the owners did with it, but I’ll bet the rest of you won’t mind that the owners decided to lighten it up a bit.

“We tried to keep the cool architectural fixtures and features here,” says current owner Jennifer Schwartz. “But it was a little much. It was very dark. So she brightened it up,” says the listing agent, Stefani Roach of RE/MAX One. 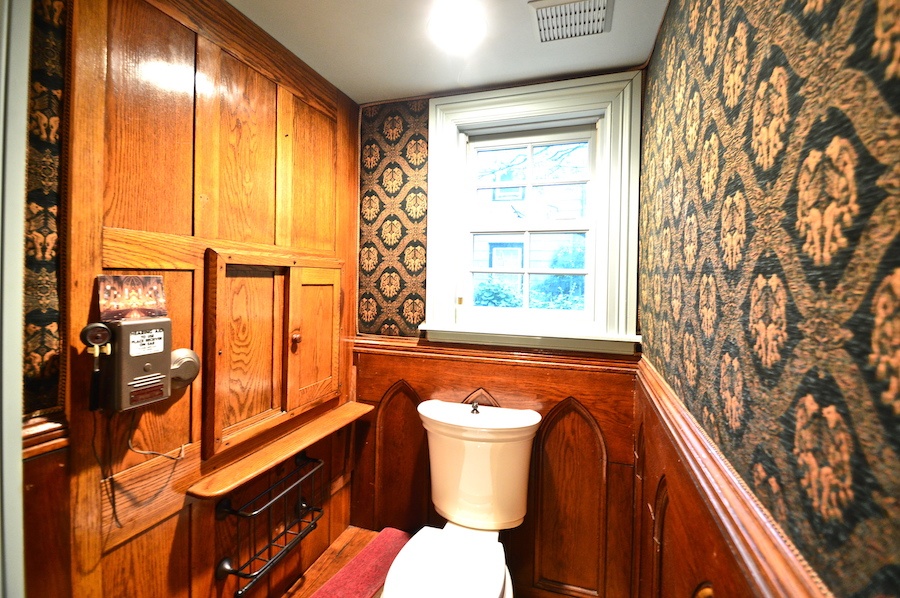 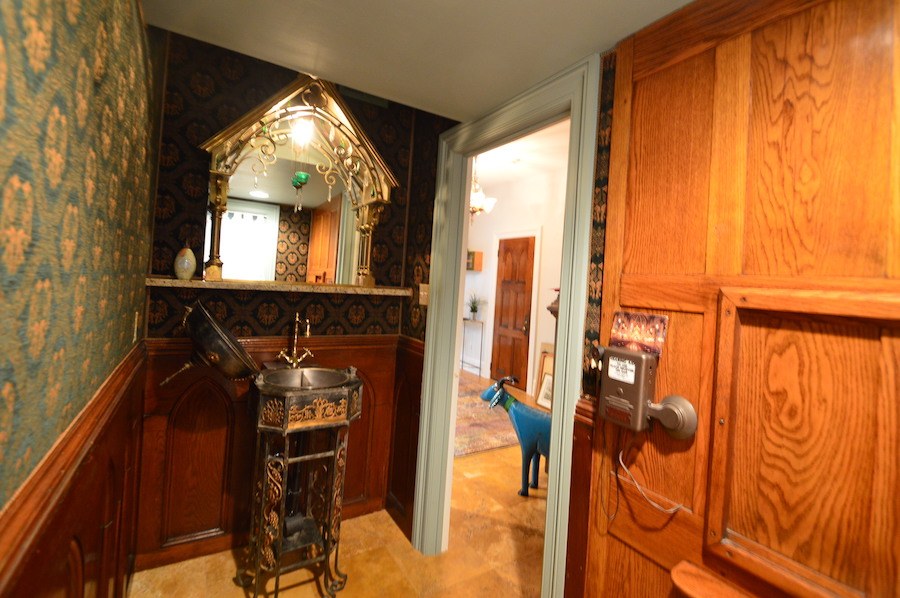 The powder room vanity was fashioned from a baptismal font in St. Ladislaus

The raw material the Schwartzes had to work with came from previous owners John Kunkler and Carol Williamson. The couple purchased the historic 1843 William S. Venable House, located right where Main Street becomes Kings Highway, in 2004. They then proceeded to restore and expand the dilapidated trinity, building a rear wing that more than doubled its interior space where the house’s kitchen ell once stood.

But “restore” really isn’t the right word. They turned it into a colorful Gothic fantasy, assisted by a church that had just departed from the scene at the time. 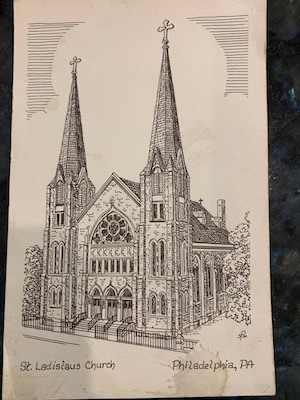 Kunkler and Williamson salvaged doors and fixtures, including two confessional doors and a baptismal font, from the former St. Ladislaus Church in Tioga. Built in 1914 and demolished 90 years later, the church had been an anchor in what was then a heavily Polish-American neighborhood in North Philadelphia.

They then contracted with the now-defunct Old City interior design firm of Goldthorpe & Edwards Ltd. to create a number of original items, including the stair rail and double chandelier in the main stairwell, in keeping with St. Ladislaus’ design. On top of that, Goldthorpe & Edwards designed several other rooms that expressed the couple’s whimsical sensibility. 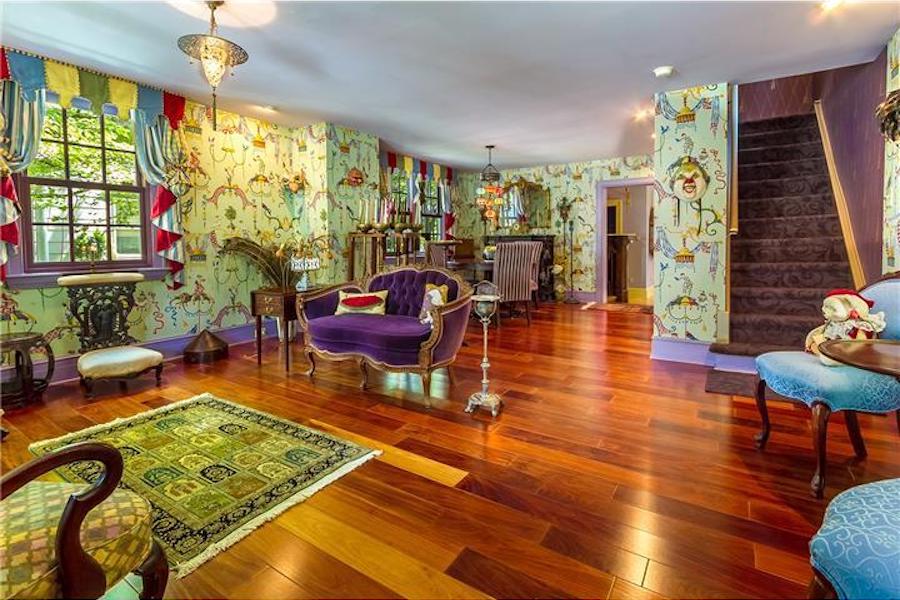 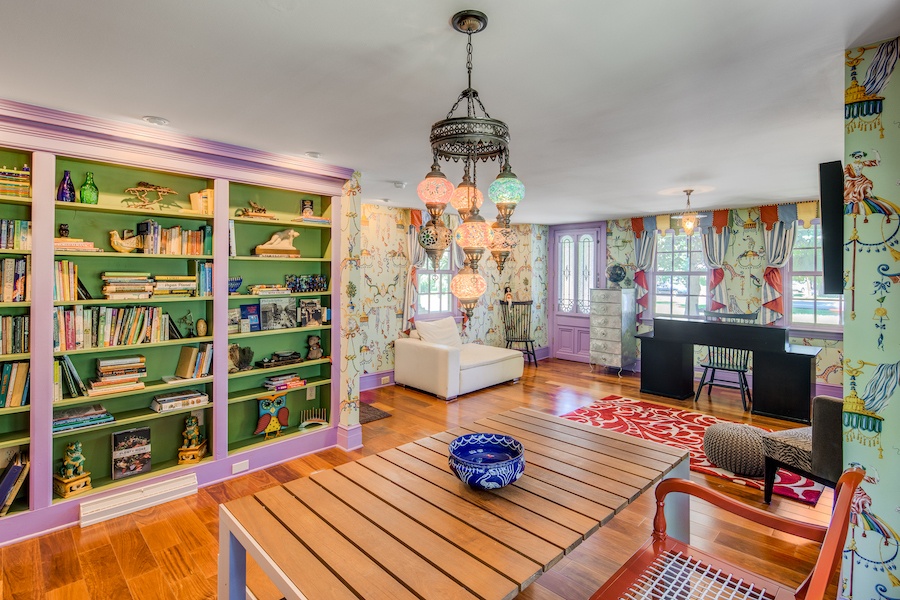 The Schwartzes did have the good sense to leave some of the best rooms alone, most notably the front parlor on the first floor and the second-floor den. But they did swap the plush 19th-century furniture for something more spare and modern. Perhaps surprisingly, the two styles work well together.

However, they did transform the spaces they use most — the kitchen and family room on the first floor and the master bedroom on the second floor of the rear wing — into something less fussy. 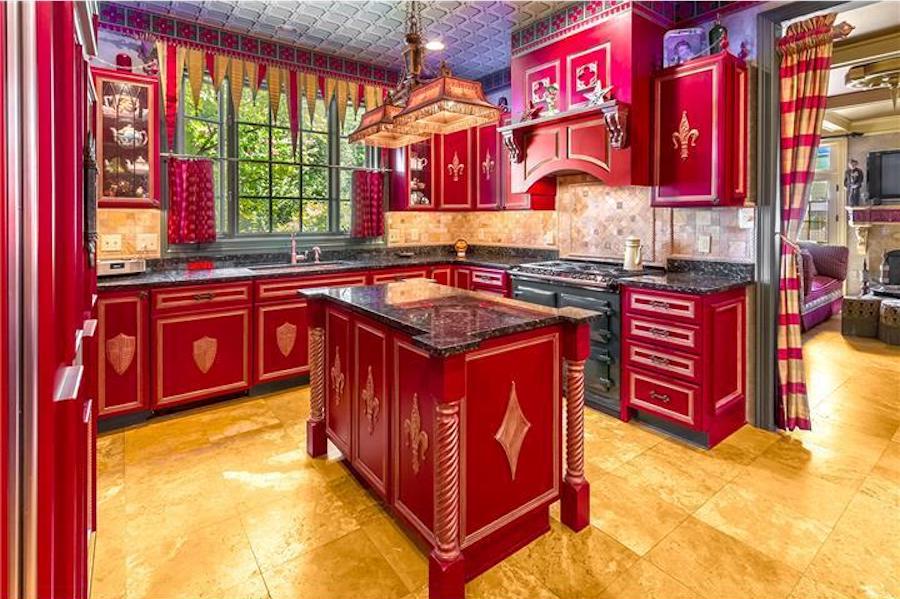 Kitchen and family room, before 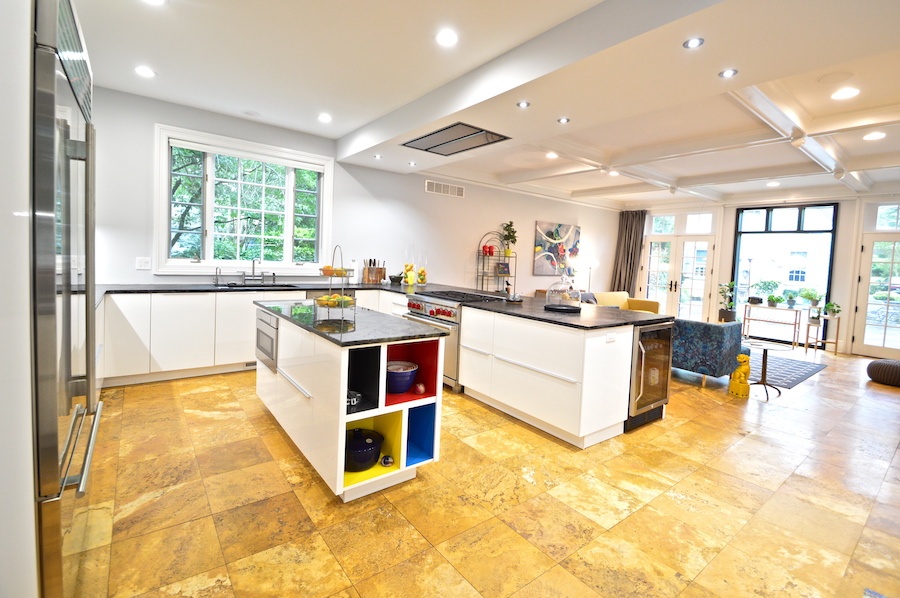 Kitchen and family room, after

They removed the wall that separated the kitchen and family room and turned it into a peninsula tying the two together.

They turned the kitchen into a sleek and efficient Eurostyle space. Its classic Aga gas range got traded in for a Wolf, its neo-Gothic-fronted Sub-Zero fridge was replaced by a stainless-steel one, and the burgundy cabinetry turned into simple white cabinets with a blue tile backsplash behind the second sink, in a prep area where a banquette had sat (behind the camera in the photo above). They also installed a distinctive Best Cirrus vent hood in the ceiling above the range. (The old fridge remains, serving as extra food storage space in the basement.) 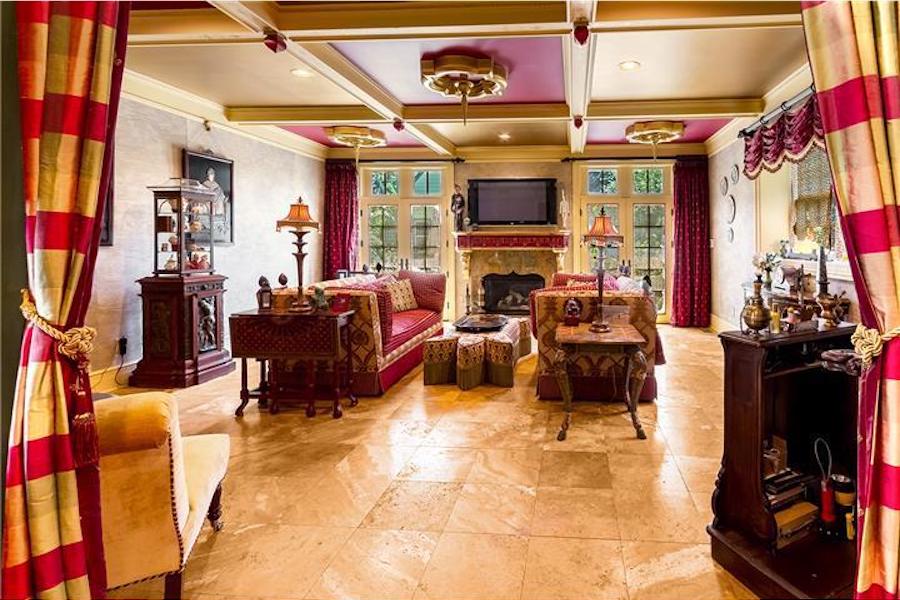 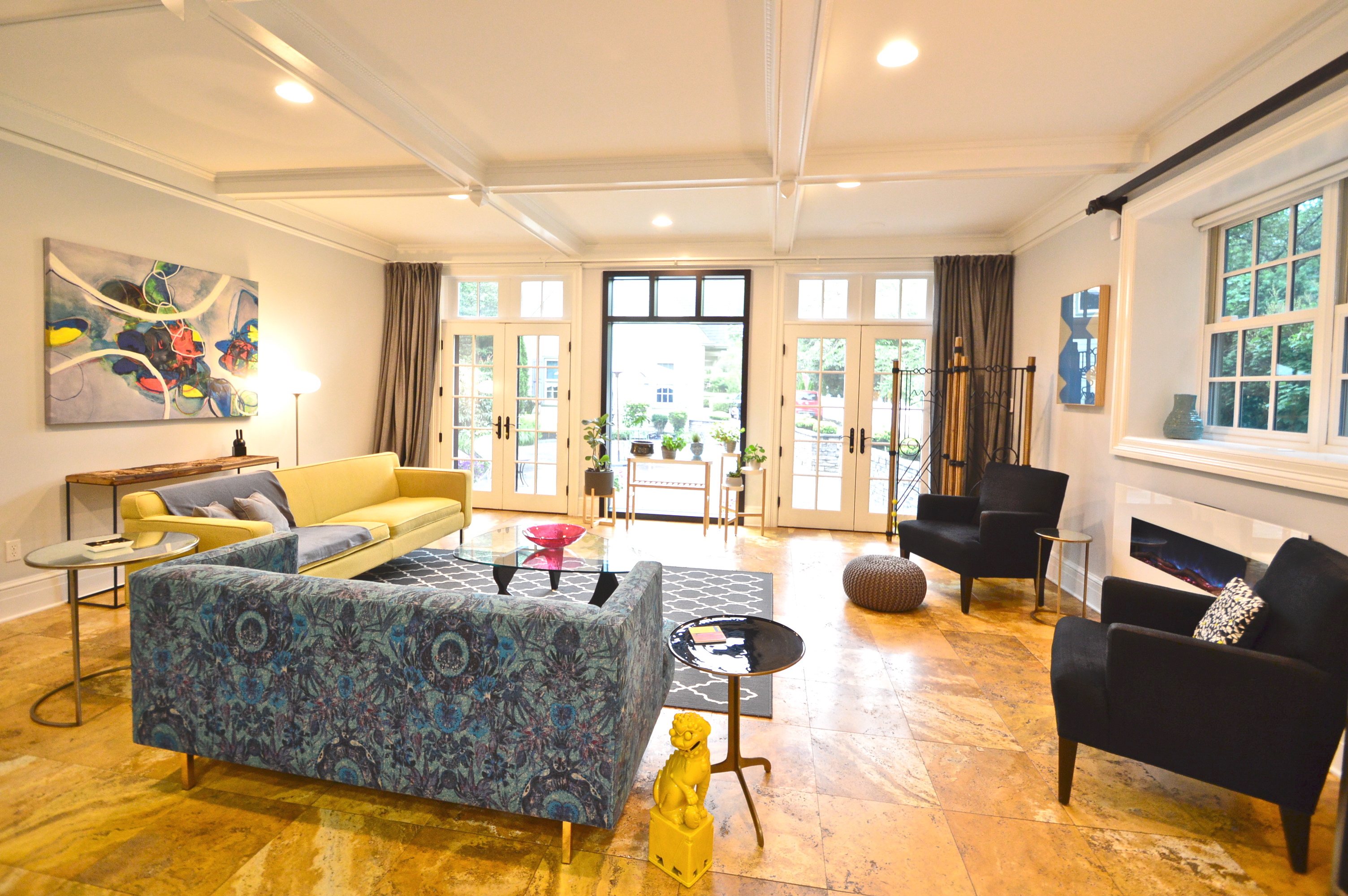 They then removed the fireplace between the French doors of the family room and put a large window in its place. The fireplace now graces one of the side walls. 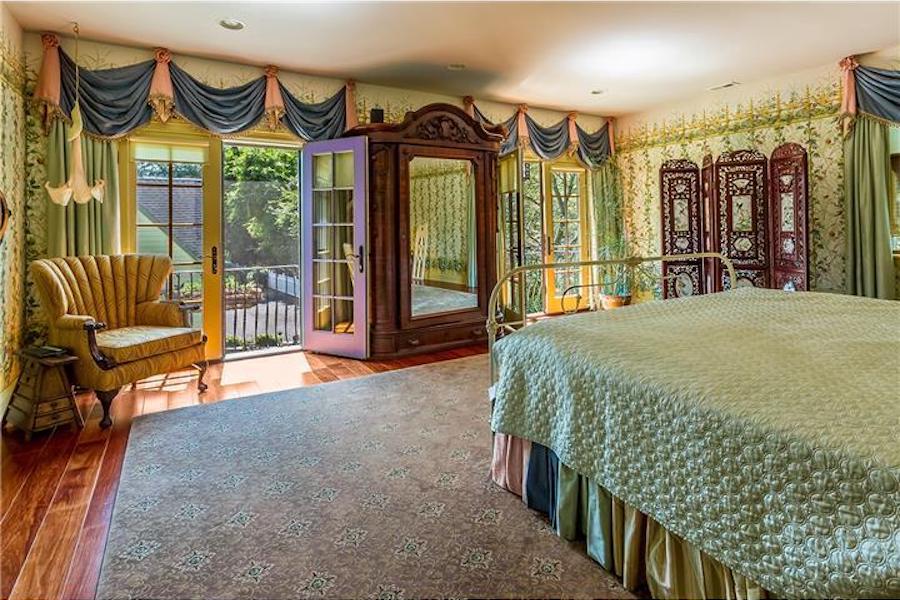 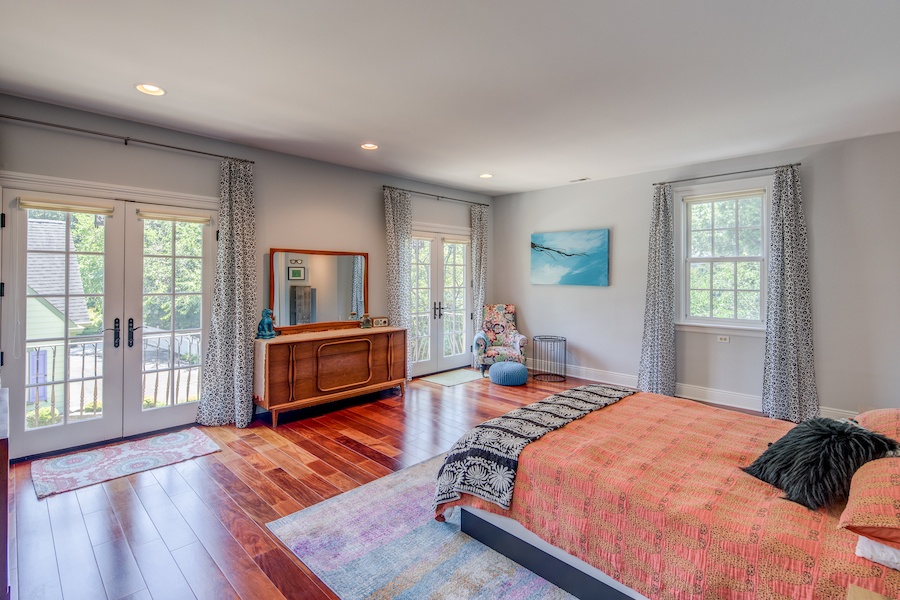 All they really had to do with the master suite was replace its patterned wallpaper and thick drapery with neutral gray walls and complementary drapes. They did remove one unusual work of art, though: Where the Schwartzes have a tall mirror terminating the hallway from the master suite entrance, Schwartz says, “they had this work of art that was the back of a hearse. And when you opened it, this Creole figure jumped out. It was really unusual.” 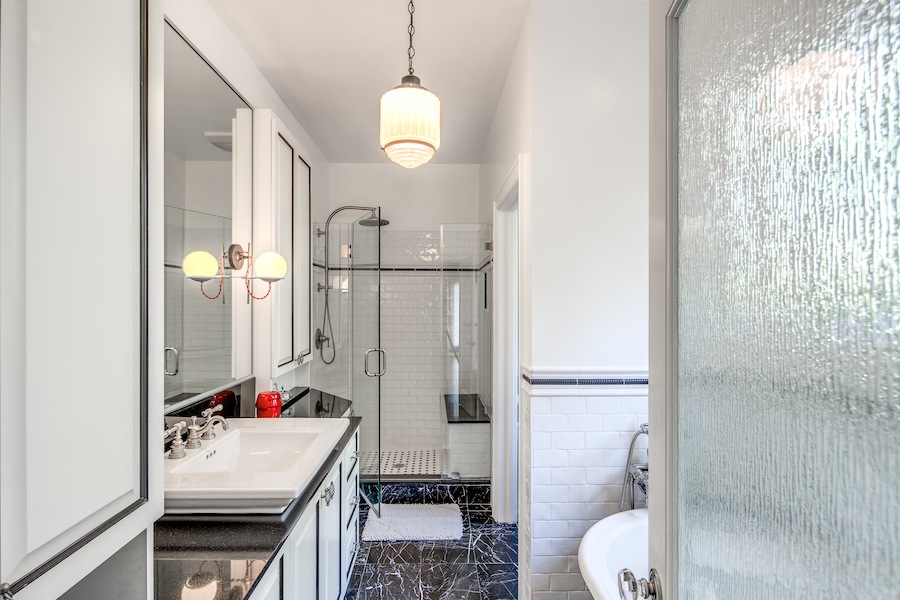 On the tamer side, the master bathroom retains its Restoration Hardware style. The only change the Schwartzes made here was to add a pair of modernist lights on either side of the vanity mirror. 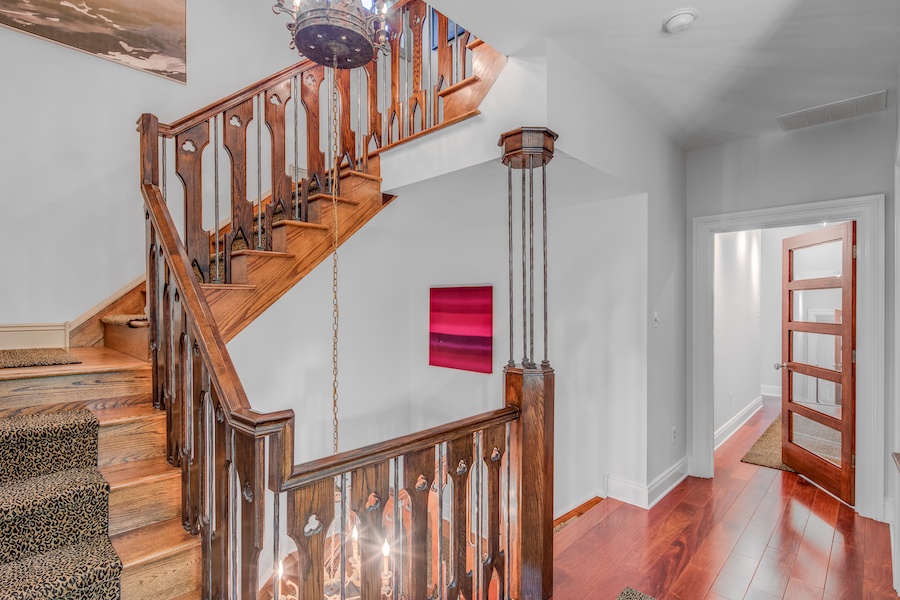 Second-floor hallway and landing; both the stair railing and chandelier are original but reflect the Gothic style of the church 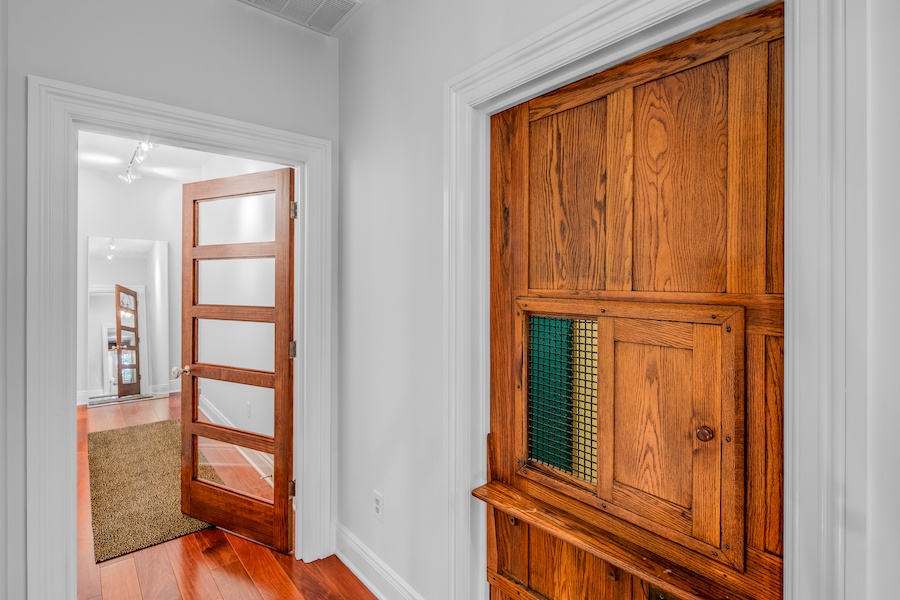 The other changes they made to this house are as minimal as those they made to the master bedroom. In the foyer, for instance, they simply traded purple walls for light gray ones.

From a functional standpoint, this house has room for anything and everything you might want to do. Up on its third floor is an open bonus room that could serve as a playroom, workshop or rec room and a fifth bedroom that currently serves as a second den. 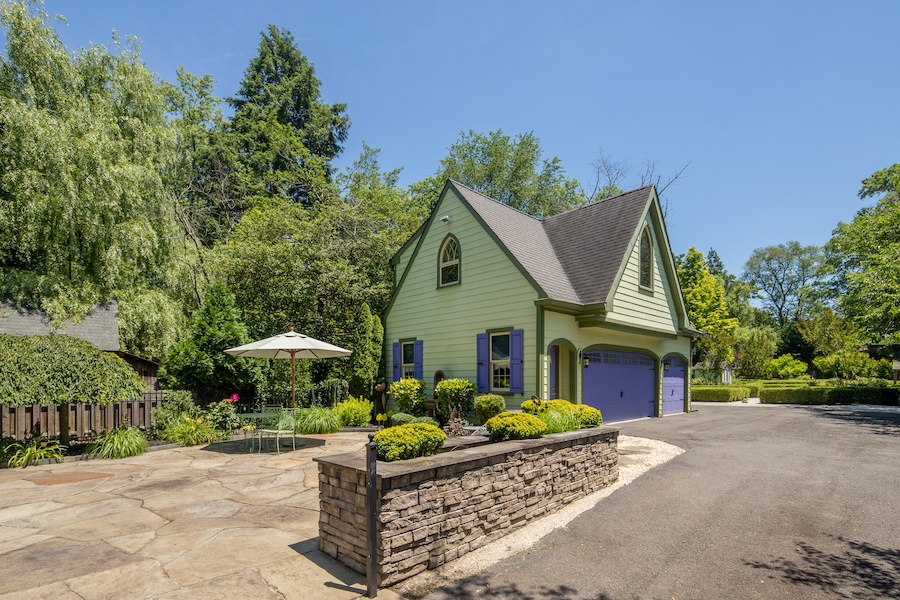 Over the three-car garage is a studio that could also serve as an in-law suite, and behind the garage is a lovely manicured garden and yard, with the St. Ladislaus churchyard gate separating the two.

The Schwartzes acquired this house when Kunkler and Williamson moved to Florida. The Schwartzes aren’t moving quite that far: I commented on some ripe tomatoes I spied on the kitchen counter on my visit. “They’re from [the] Head House [farmer’s market],” Schwartz told me.

“Not Collingswood?” I replied.

“This is why I’m moving to the city,” she said back. “I spend all my time there.”

Maybe you’re a city dweller who’s looking for some urban sophistication with a little more outdoor space. Were I you, I’d consider trading places with the Schwartzes. You’ll get that and then some in return.

BATHS: 4 full, 1 half (with confessional)