Both halves of this historically certified Victorian twin are on the market. Together, they have the potential to become one singular sensation. Or you can separate them again and make it twice as nice. 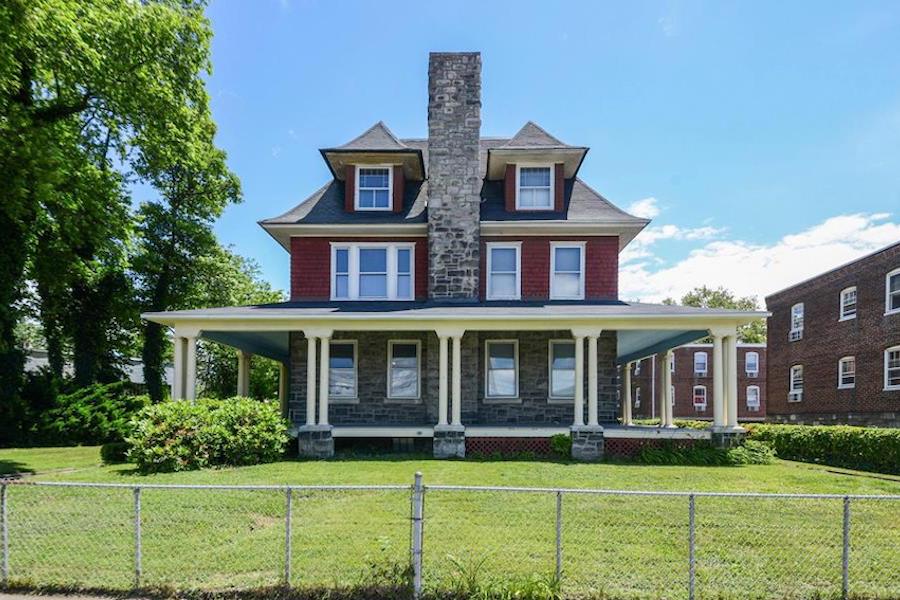 Yesterday, we showcased a modern gem in an upscale condo community in Flourtown. Today, we offer you a true diamond in the rough that’s all ready for you to cut, polish and turn into a 1000-carat flawless masterpiece.

The twin house for sale you see above was built in 1898 and designed by noted Philadephia architect Horace W. Castor, who called one-half of it his home. Castor’s family has deep roots in Frankford, and I’ll wager that Castor Avenue, one of the main thoroughfares up the Northeast’s west side, is named for either his father Thomas Elwood or his grandfather Thomas; the grandfather founded the carriage-maker the father later ran. 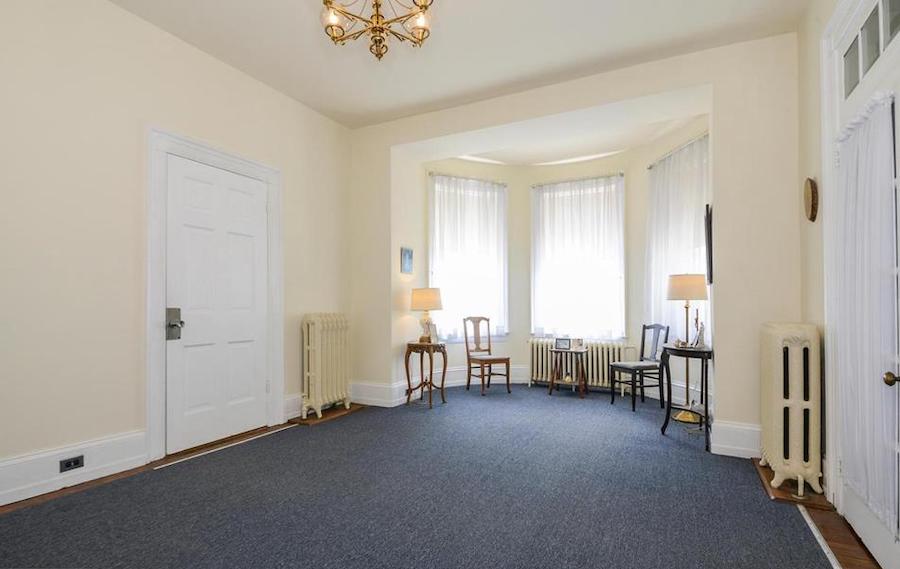 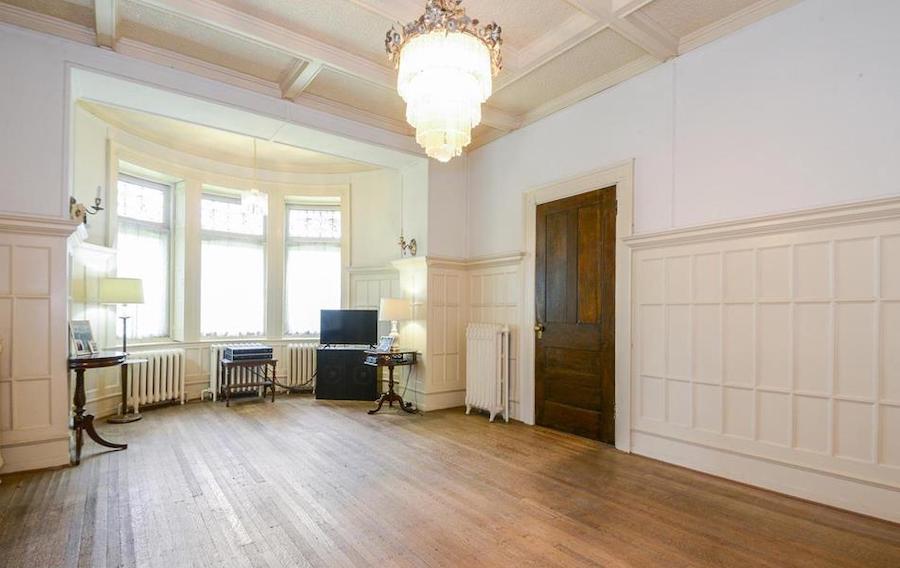 As the photos should make clear, the past owners of the two halves have been more or less faithful stewards of the architectural legacy they were handed. I can’t be completely sure which half of this house Castor lived in, but my money’s on 7347, given the architectural detail that survives in it, like the coffered living-room ceiling. 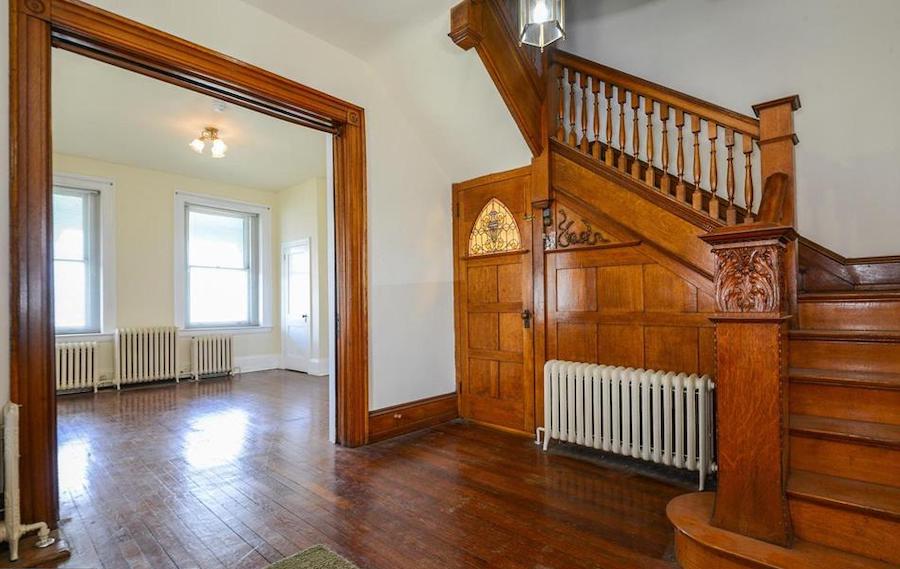 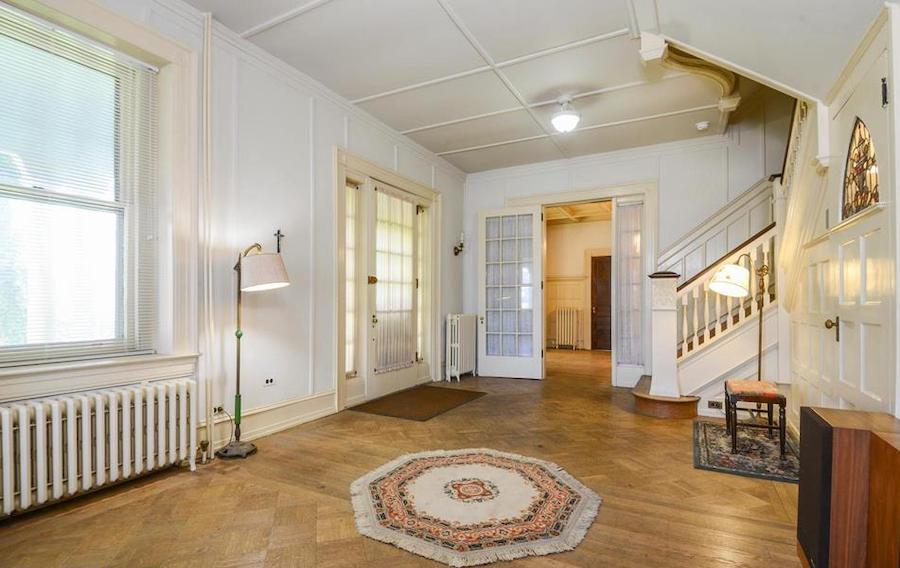 Unfortunately, it looks like some of the detail in the foyer woodwork got stripped away by a subsequent owner of that side of the house. But it survives intact in 7345’s foyer. Get some paint stripper and hire a good wood turner and you might just be able to restore the original warm tone of the filigreed banister and pillars. (The parquet wood floor in 7347’s foyer is probably a later alteration as well, but it’s in decent enough shape that you might want to just refinish it rather than replace it with something more in line with the original.)

This twin has so much restoration potential it hurts. And there are many interesting details, some original, others added later, that you can work with. 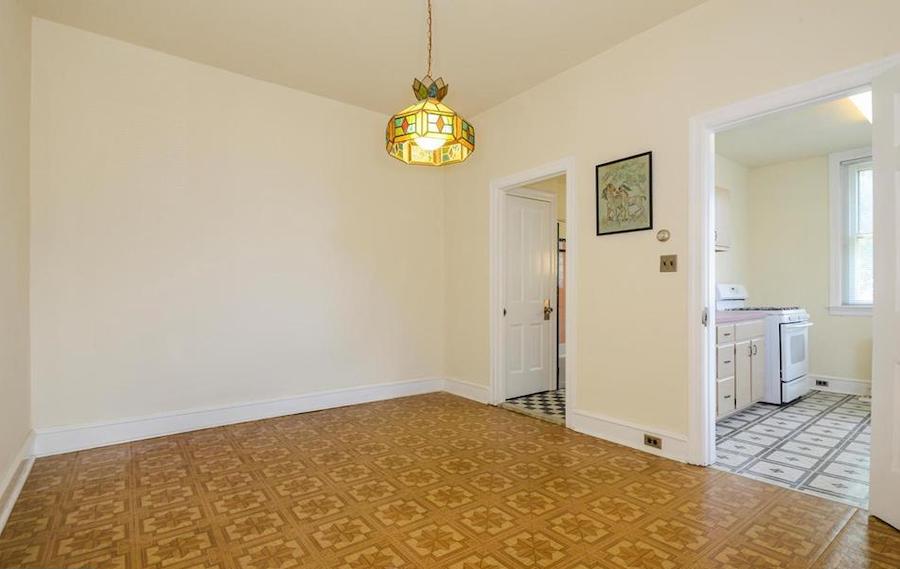 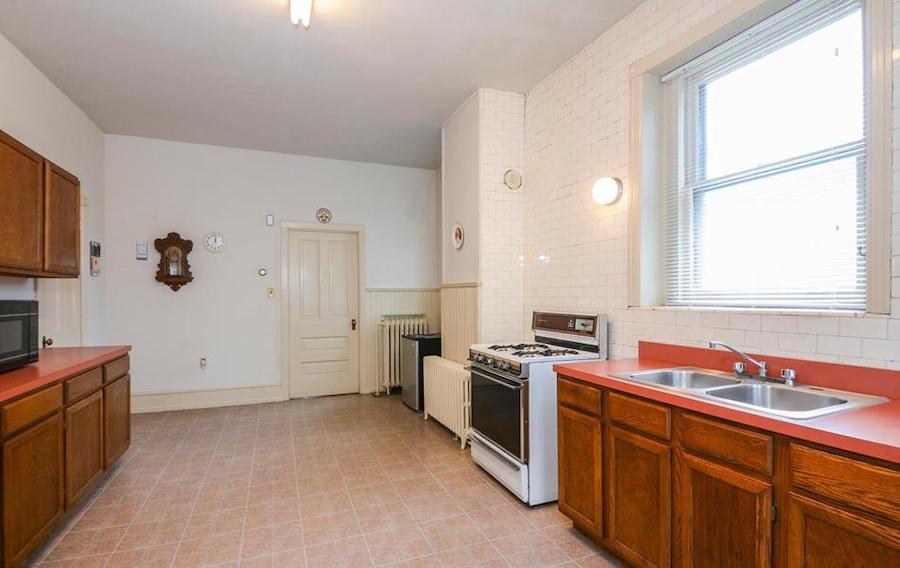 Both kitchens, for instance, need updating and upgrading. But those of you who go gaga over subway-tile backsplashes might want to take note of the very early installation of a subway-tile wall in 7347’s kitchen. 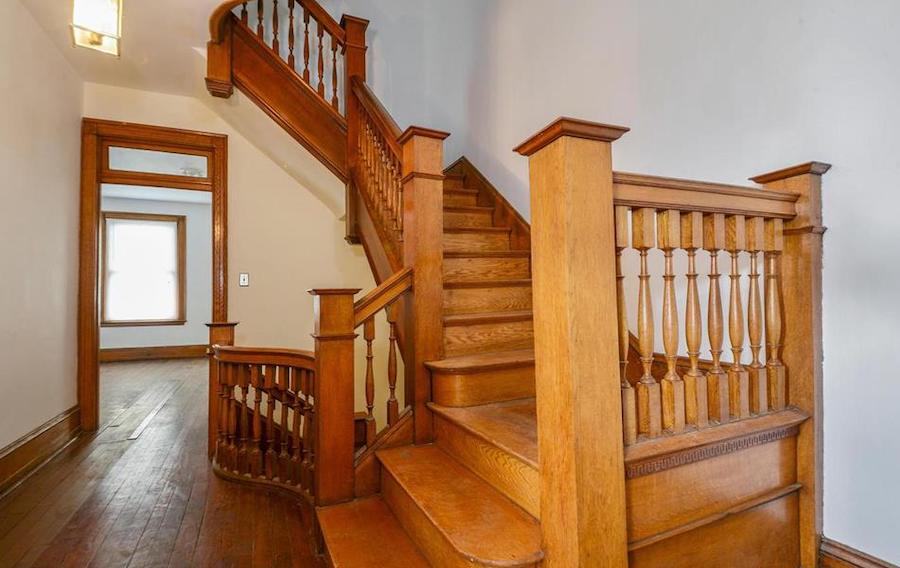 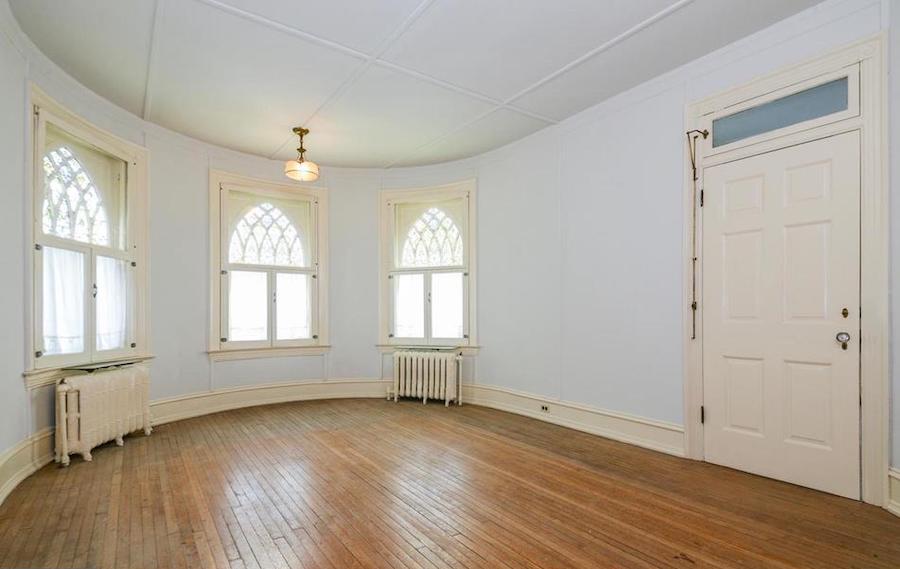 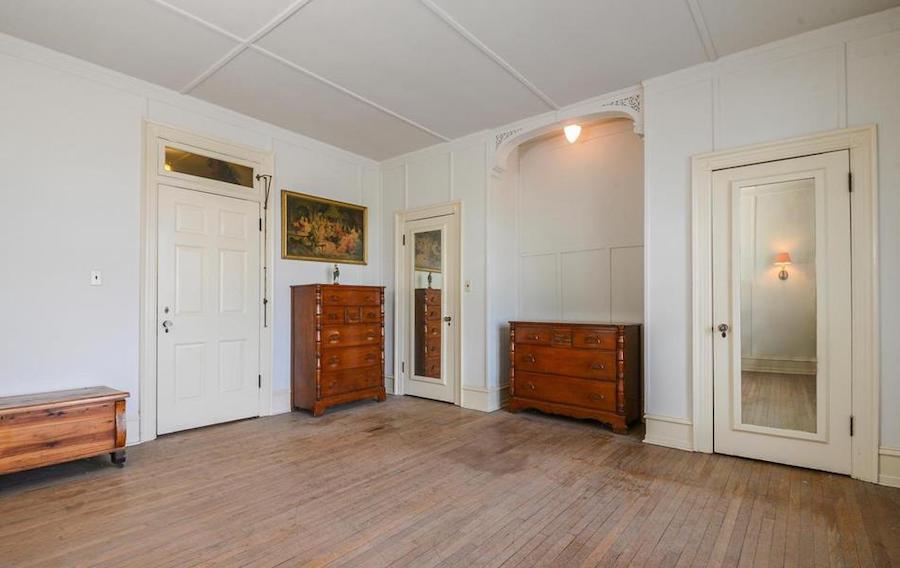 And while a prior owner of 7345 put down carpet in the living room, it was installed in such a way that you should be able to remove it and refinish the hardwood floor beneath it with very little need for repair. 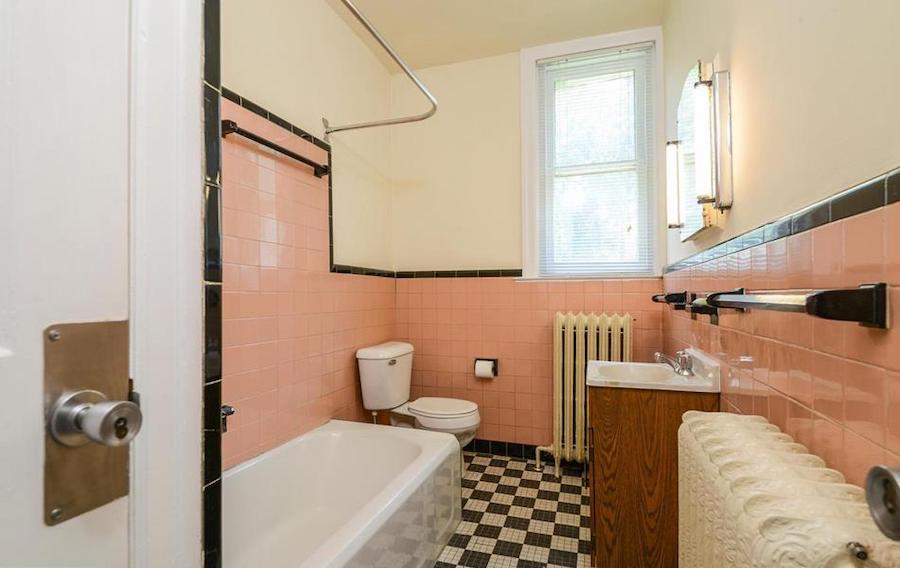 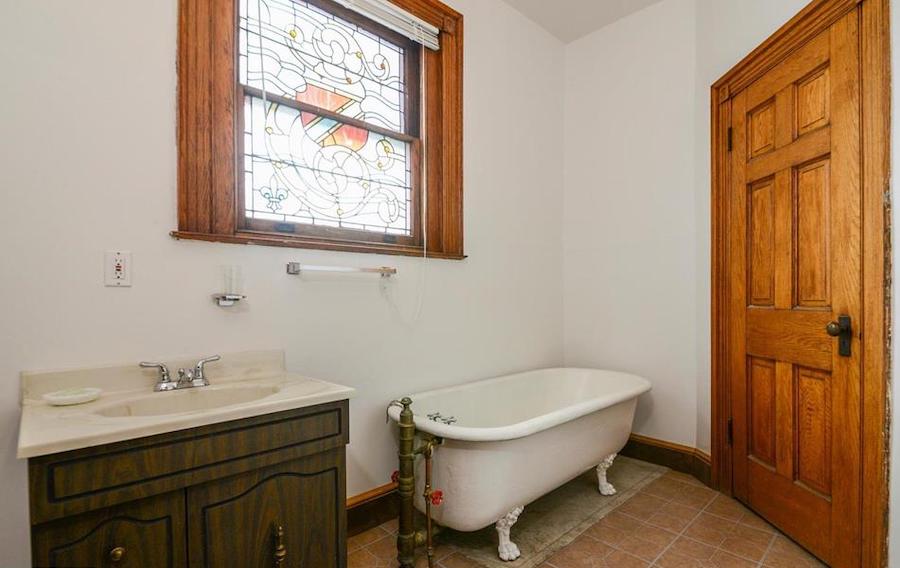 7345’s two bathrooms offer interesting makeover possibilities as well. Downstairs, a prior rehab turned the first-floor bathroom into a 1940s Moderne space, while the upstairs bathroom has a stained-glass window and original clawfoot tub and plumbing. 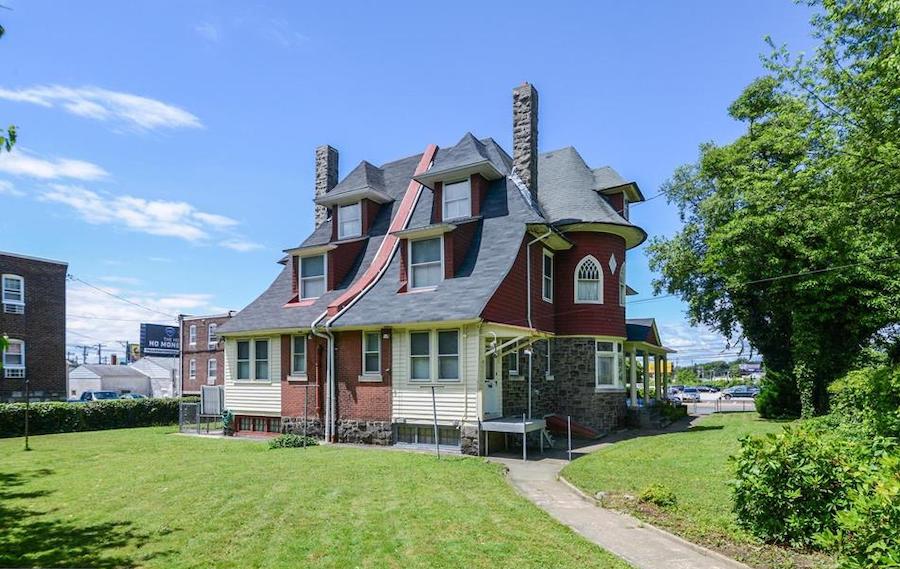 The current owner combined the two halves into a single residence, though it’s not clear from these photos how or where the two are connected internally. However, both sides contain all the elements you need in a house, so turning it back into a duplex should be real easy to do. It will take some work to turn these two units back into turn-of-the-20th-century masterworks, but doing so should prove most satisfying.

OTHER STUFF: The two-car detached garage on the property is included with 7347 Oxford Ave. This house was placed on the Philadelphia historic register in 2017, so any exterior renovations will have to pass muster with the Philadelphia Historical Commission. The seller is offering these two properties as a single package, and the possibility of subdivding its lot to build two duplexes or three single-family houses in the rear also exists.