On the Market: Rambling Riverside Manor in New Hope

Is this a traditional Pennsylvania farmhouse or a sleek modern house? The answer is: It's both. 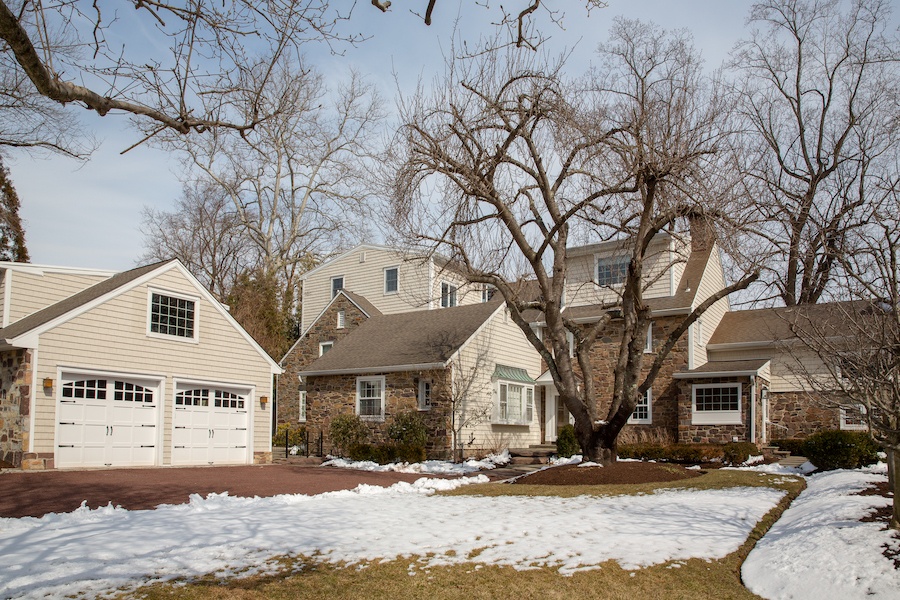 At first glance, the house you see in the photo above looks like a classic 18th-century Pennsylvania farmhouse that got some modern additions tacked onto it. But it’s really two houses that got combined and expanded into one singular sensation that nestles up to the bank of the Delaware River, just a short walk north of New Hope’s central intersection.

The older of the two houses that make up today’s “Boxwood Studio” dates only to 1929. American Impressionist painter Fern Coppedge, one of many artists who gave New Hope its reputation as a creative community, built a traditional Colonial stone farmhouse with a studio attached. It’s located behind the center wing in the photo.

Coppedge sold the house in the late 1940s. Sometime between then and 2007, when the current owners purchased Coppedge’s residence, a second house — the one to the right of the center wing— went up on the site. Joined at the hip to the first house, the second turned the property into a condominium.

Four years after buying the Coppedge house, the owners bought the second house and turned the two into the house you see today. In addition to combining the two traditional houses, the owners added third stories of more modern design. 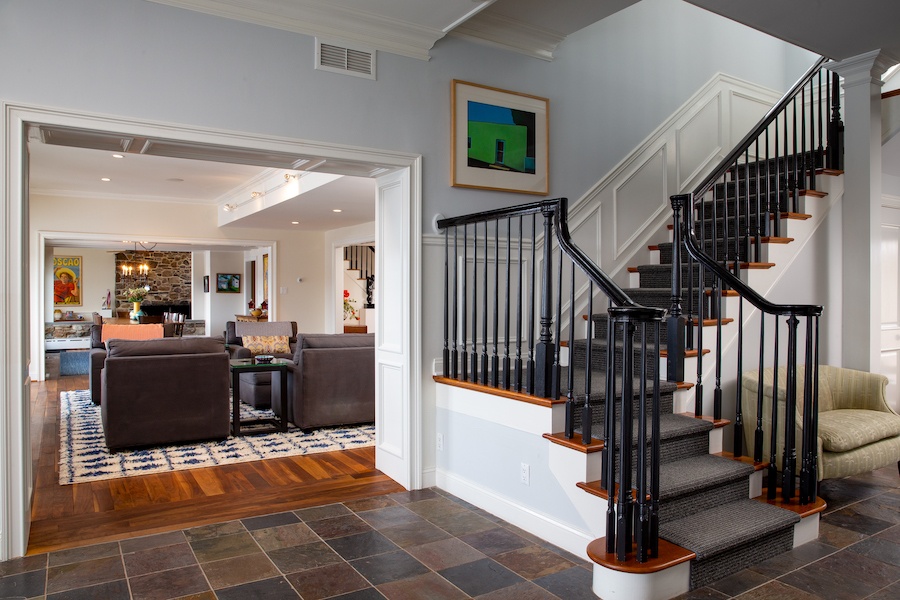 Foyer, original house; newer foyer beyond living room to its right. The kitchen and breakfast room incorporate this space 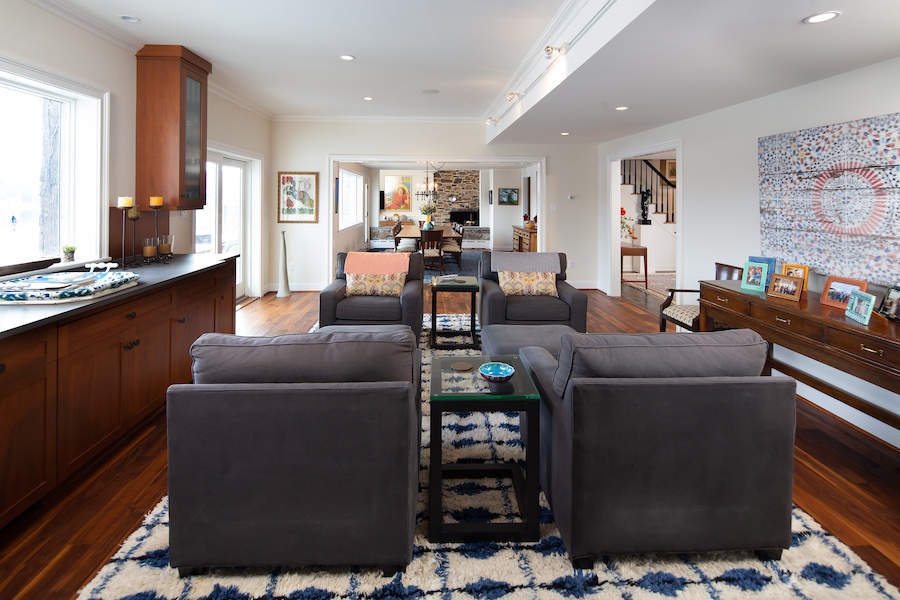 This house is designed to take maximum advantage of its riverside site. Its two foyers both connect to a string of rooms that all have large windows facing the river. 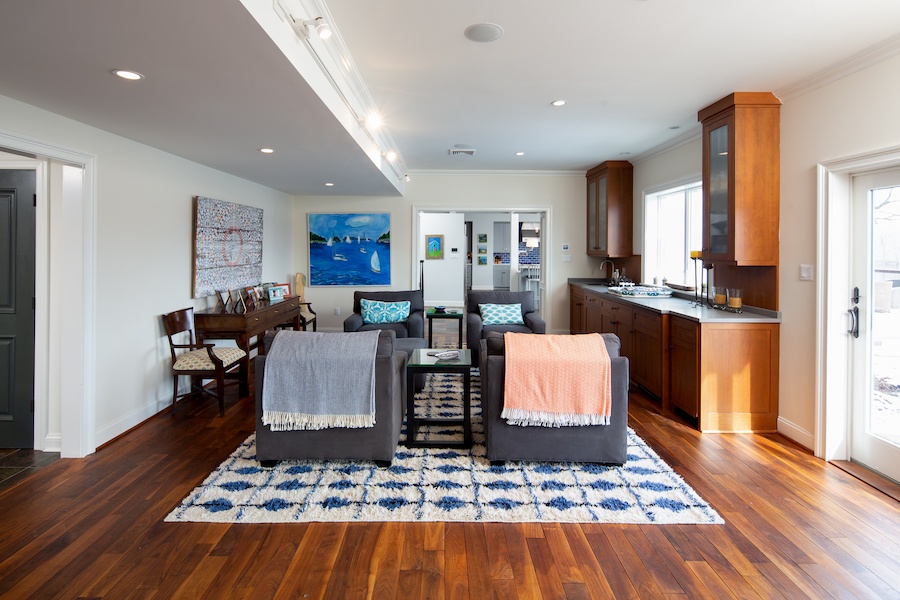 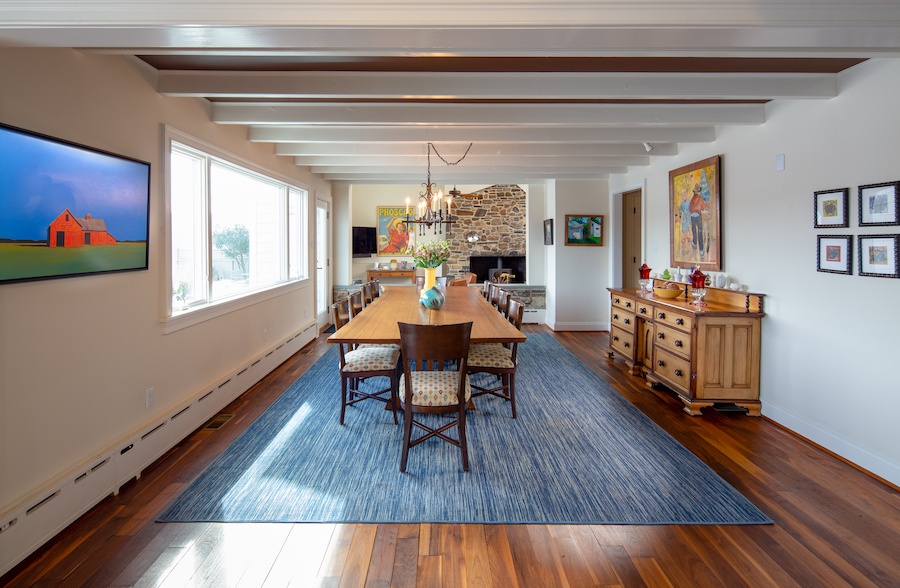 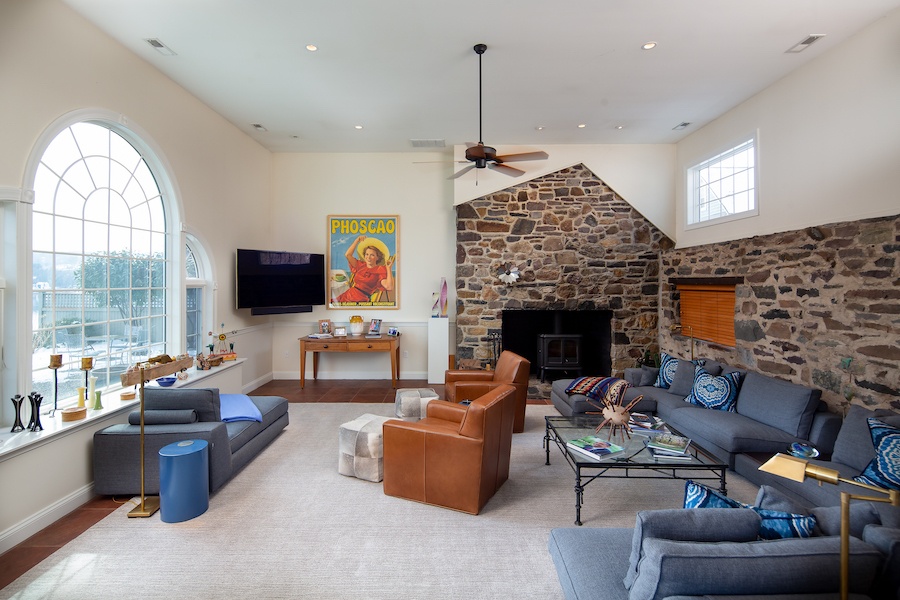 From left to right, they are the kitchen and breakfast room, the living room, the dining room and the family room. These spaces flow one into the other, terminating in the stone-walled family room. 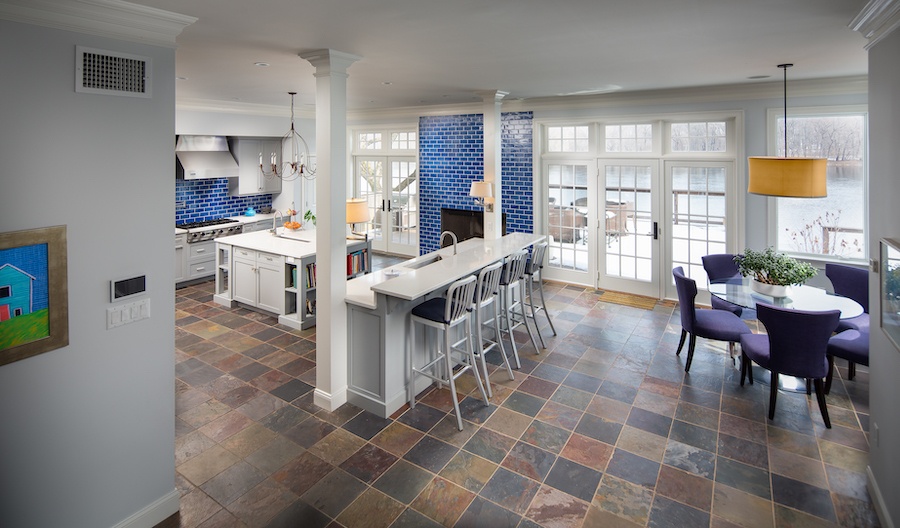 You will find elements of both traditional and contemporary style in these rooms and elsewhere in the house. For example, take the kitchen’s fireplace and backsplash of blue glazed-brick tile, a striking modern complement to the space’s classic style. 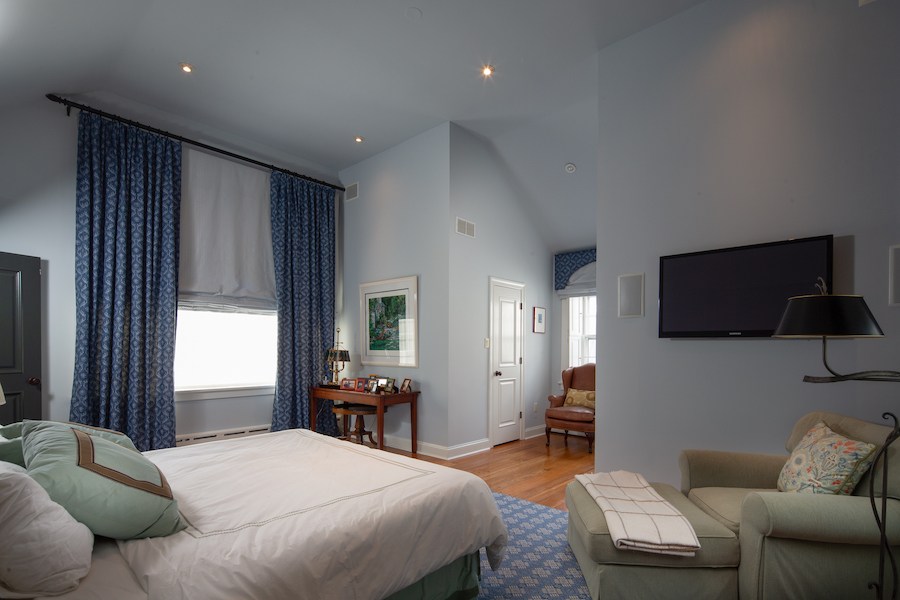 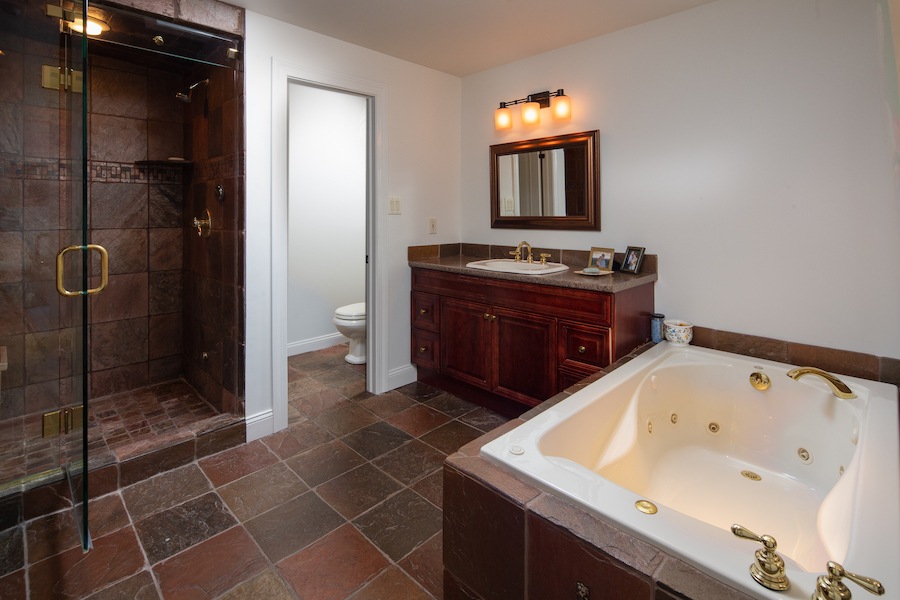 The wing of the house that once contained Coppedge’s studio now holds a guest bedroom suite with an en suite bathroom featuring a jetted tub and stall shower. If you prefer one-floor living, this would make a good master suite. 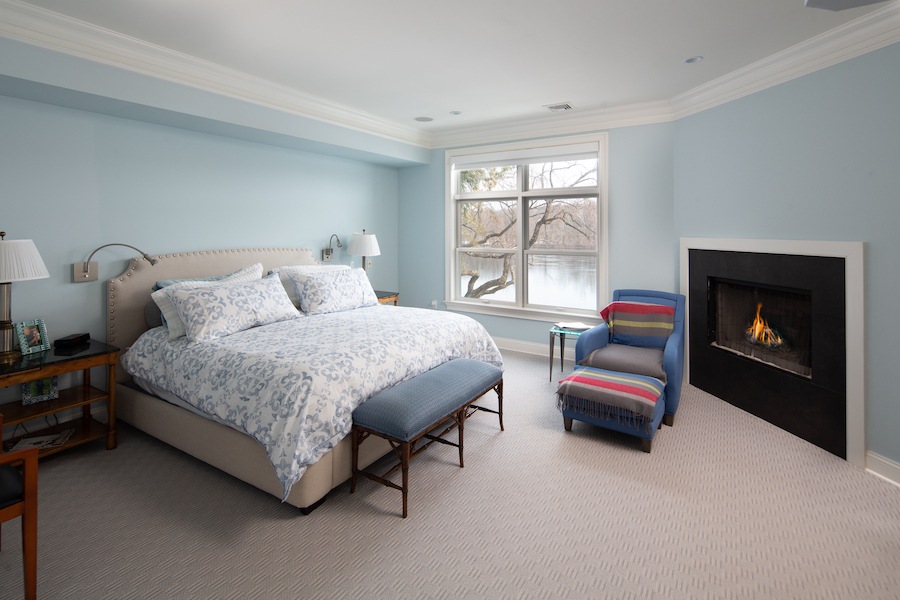 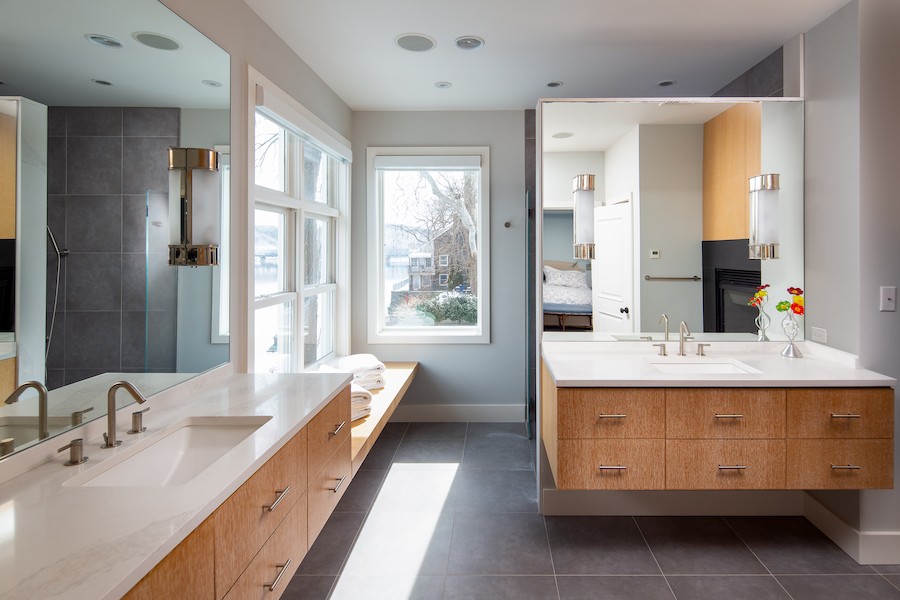 But you’ll find the real master suite upstairs, on the second floor of the original house. It includes a sitting room, a fireplace and a strikingly modern bathroom. 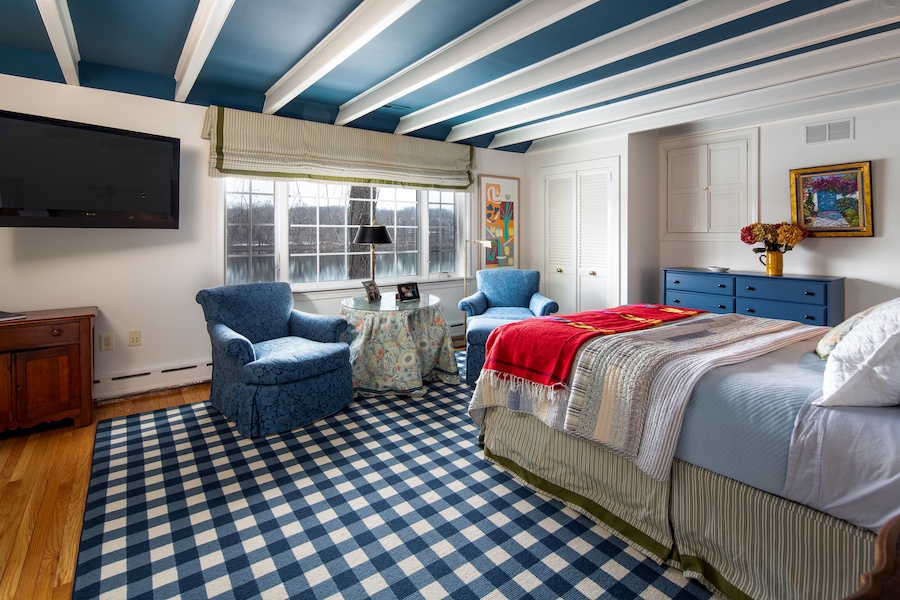 Second-floor bedroom in newer wing of the house

Four more bedrooms, one with a beamed ceiling and two with gas fireplaces, and a study also occupy the upper floors. Most of these rooms look out over the Delaware and have large windows that let you take in the view. 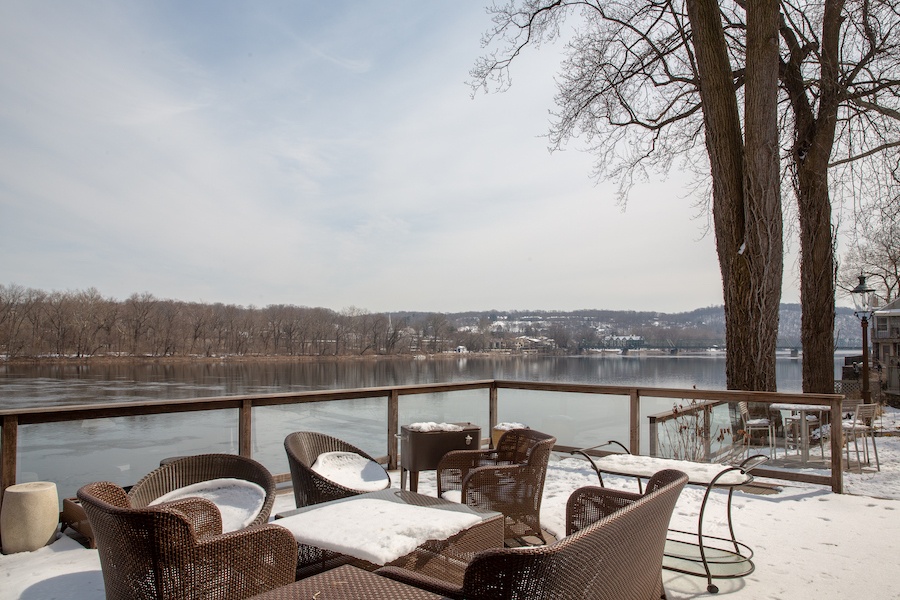 And as summer approaches, you will also enjoy the view from the large deck behind the kitchen. From it, steps lead down a series of terraces to a riverside boat slip. 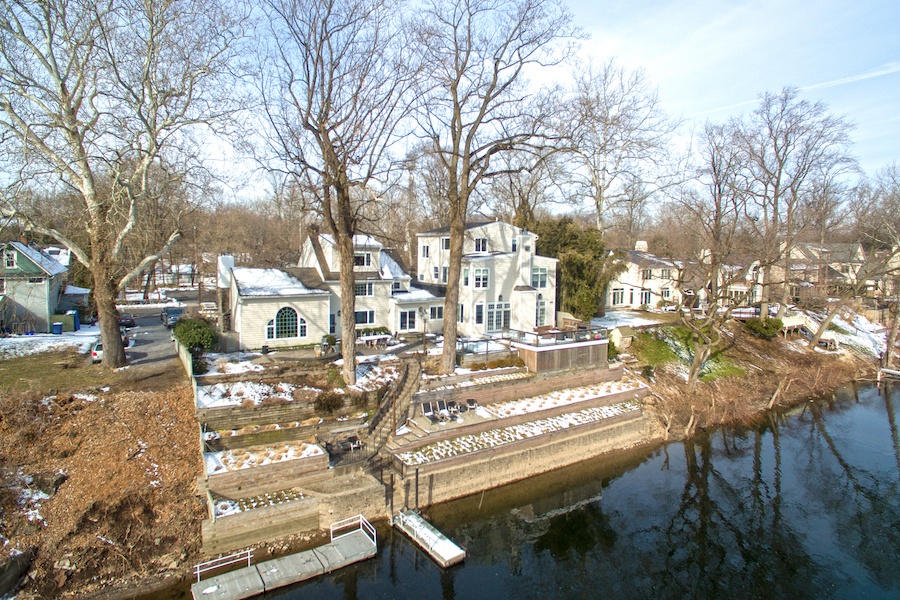 This truly unique residence makes a great canvas on which to paint your future dreams. And this original mix of historic and modern style also puts you at the heart of everything that makes New Hope such a fun place to live.

Updated June 4, 5:07 p.m., to correctly identify some of the rooms in the house and reflect its new name. The owner has renamed the house, which had been called Riverstone Lodge, Boxwood Studio to honor Coppedge and her legacy.