What started out as a school for orphaned girls, then became a corporate campus, is now a fully integrated community where one can live, work and play in a sylvan setting. 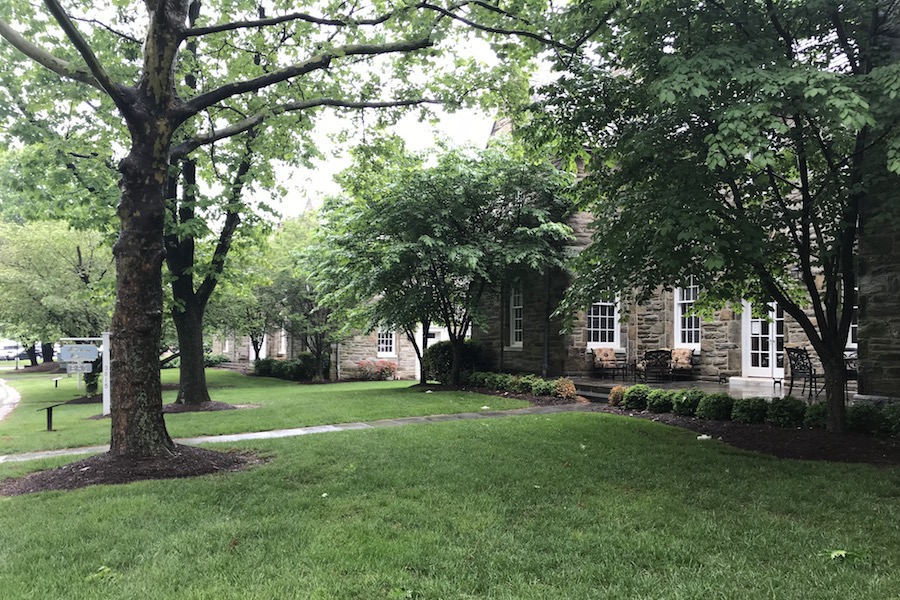 The original buildings and green of the Ellis School now form the nucleus and “village green” of the Ellis Preserve mixed-use community. | Photos: Sandy Smith unless otherwise noted

Oldtimers still speak of Newtown Square as the bucolic country crossroads it once was.

That Newtown Square, we regret to inform you, has long since vanished, just like the school for orphaned girls that once occupied a few hundred acres just off its main intersection, helping to preserve that bucolic feel.

In its place is today’s crossing of West Chester Pike and Newtown Street Road. It’s littered with banks, gas stations, drugstores, and two clusters of shops that predate everything else by a few decades. And it’s cluttered with traffic all the time.

But just off this crossroads, where the school for orphaned girls once sat, a series of developments have added something that Newtown Square hasn’t really had: A village at its center.

This village, known as Ellis Preserve, is the brainchild of the real estate investment firm that moved its headquarters to the site last year. Equus Capital Partners, which acquired the site in 2004 and moved to it in April of this year, is nearing completion of the first phase of a multiphase project that will bring additional offices, shops and residents to the center of Newtown Square.

To understand how we got here, Equus Senior Vice President for Acquisitions and Development Stephen M. Spaeder explains, it helps to start at the beginning.

From orphaned girls to office campus

That would be 1909. That was the year Charles Ellis died. Ellis is the Philadelphia traction magnate you haven’t heard of. In contrast to the more fabulously wealthy Wideners, Ellis made only a small fortune a horse-drawn street railway in the city, then launching the Market Street Elevated Passenger Railway Company. (Yes, it was Ellis who began work on the city’s first rapid transit line; the Wideners would buy him out as they assembled what became the Philadelphia Rapid Transit Company.)

When Ellis died, he left his fortune to establish a boarding school for orphaned girls along the lines of Girard College with one stipulation: the school and its grounds had to be located along the trolley line he built. Being unable to find a suitable site, the school located along another one: the Philadelphia & West Chester Traction Company’s West Chester Pike line. The Ellis estate purchased a 318-acre farm to house the school, which opened in 1922 in a series of buildings designed by noted local architect John Windrim.

The school grew and flourished from the 1920s until the 1950s, but as the 1950s gave way to the 1960s, the school had trouble supporting itself off its endowment and had lost sight of its mission by admitting paying day students in greater numbers. In 1977, unable to continue in its original form, the Ellis School shut down. The Montgomery County orphans court required the trustees to sell the school property, and proceeds from the sale continue to provide scholarships to fatherless girls today.

Arco Chemical Company, then headquartered in the Centre Square towers in Center City Philadelphia, bought the Ellis property in 1978 and built its new headquarters on it, ultimately adding 1 million square feet of research and development facilities. In 1997, Arco decided it had too much land on its hands and sold 100 acres of it to the German software company SAP, which built its North American headquarters there.

Arco gave SAP the right to buy the rest of the property if it ever decided to move or sell. Arco spun off its chemical business in 2001, and the spinoff firm put its holdings up for sale that same year. SAP then exercised its right.

More land than they knew what to do with

“They very quickly realized that this was a very large property,” Spaeder says. “They didn’t need it all, and it involved significant operating costs and effort, so they decided to sell in 2004.”

Enter Equus, which acquired all of the site save the 100 acres SAP’s office campus sat on — 218 acres total. And most of what it had was functionally obsolete and way underutilized.

“Our plan was to bring new energy back to the campus, to redevelop all the buildings to make them viable,” he continues. “That would allow them to attract new businesses to the campus. Then we wanted to develop a plan for a mixed-use community, the live/work/play thing that all of us had been talking about in development for close to 20 years at that point.” 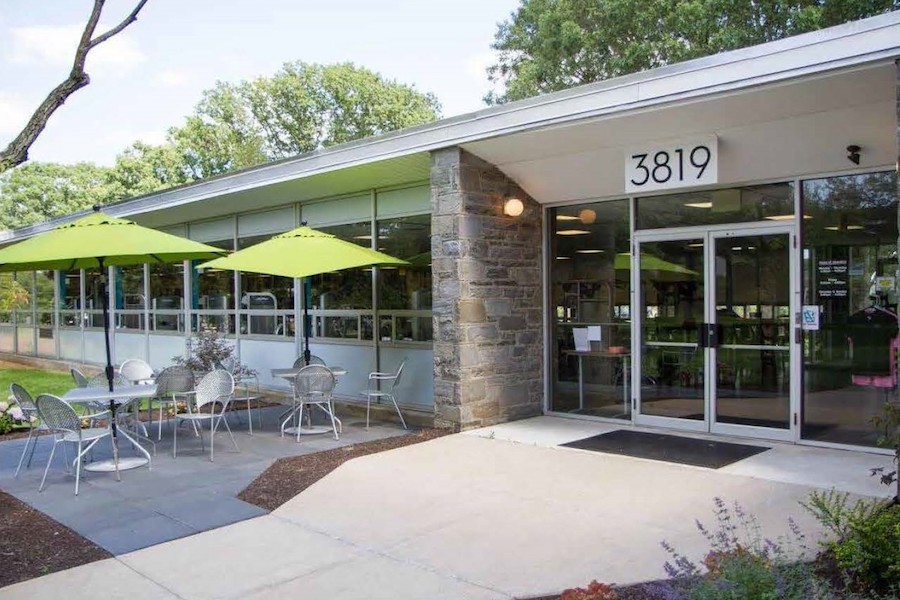 The former Ellis School gym is now a fitness center that both office and residential tenants can use. | Fitness center photos: Equus Capital Partners 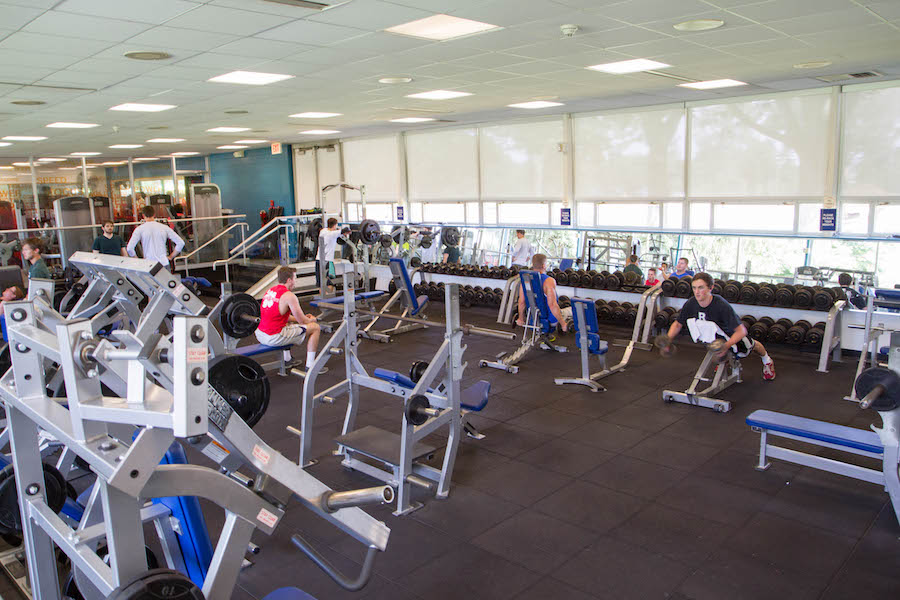 The free weight room at the fitness center. 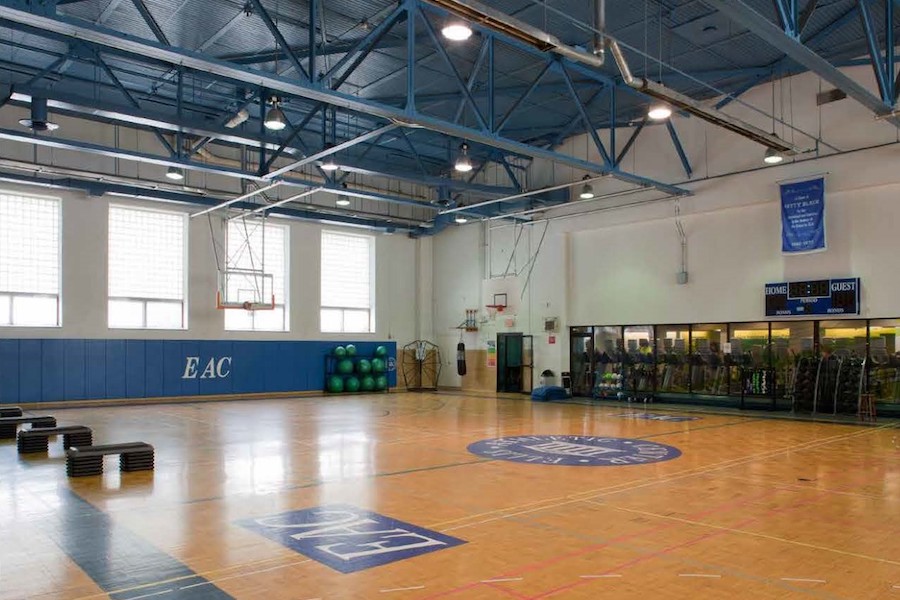 The multipurpose basketball court in the fitness center. Cardio trainers are located behind the glass wall at the rear.

The first part involved gutting and rebuilding 14 of the buildings that stood on the site, including all seven of the original Ellis School buildings and the school’s old gym. (A few of the later additions to the Ellis School campus were torn down.) Each of them got their own electrical and climate control systems, which eliminated the need for the central utility plant and reduced the site’s energy bills by $9 million. The central utility plant became a daycare facility, and the Ellis School gym became a fitness center, a community amenity for the building (and later the apartment) tenants. 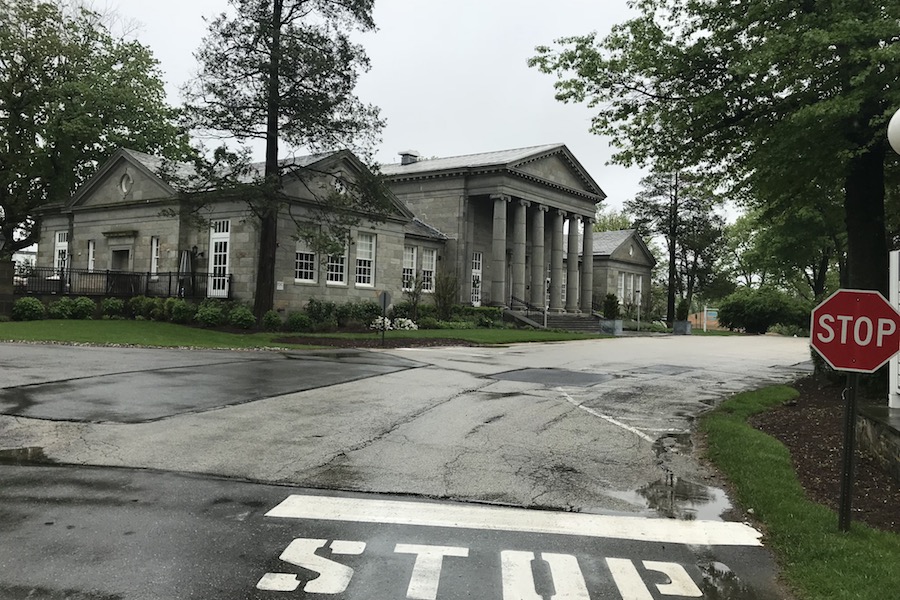 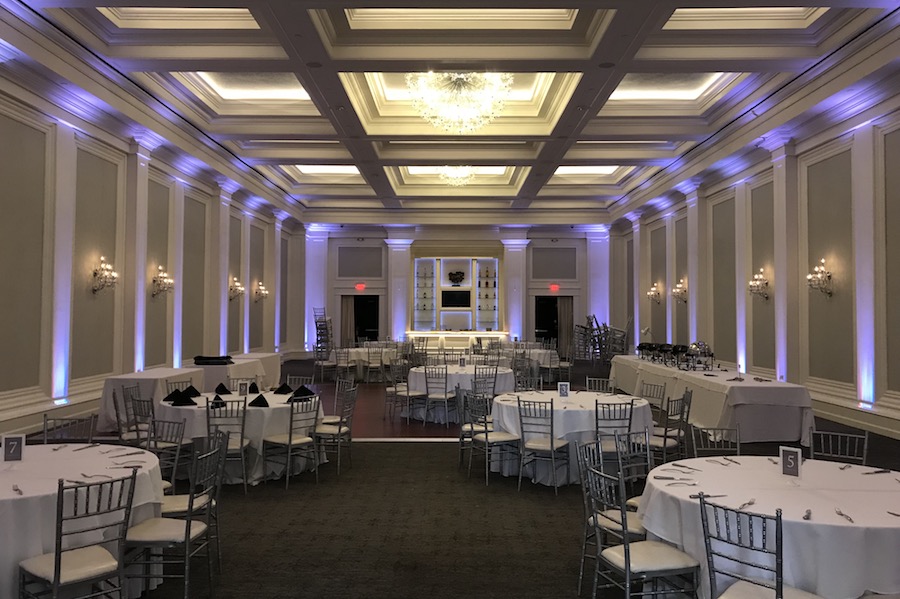 Its ballroom is booked every week of the year with weddings and other functions.

The rest of the Ellis School buildings were converted to other uses. The old dormitories became smaller offices, and the administration building became a catering and function facility.

“The Ellis School buildings were in falling-down condition,” Spaeder says. “We preserved all of them, and at substantial cost. 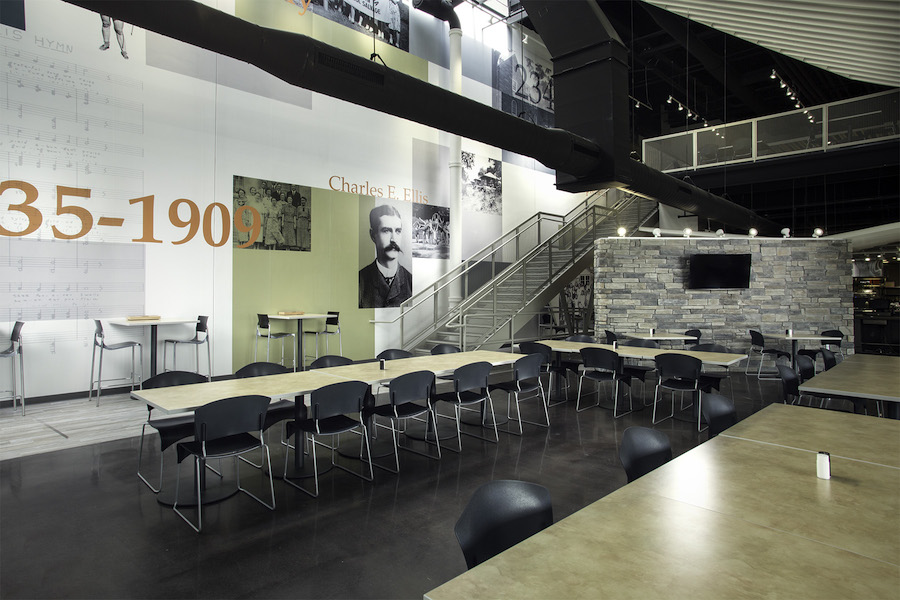 “But it was all deliberately done. In the course of the renovations, we created on-site walking trails, a restaurant, daycare and a fitness center. We were able to deliver a different kind of amenity package that we felt people needed through the day, and that allowed us to attract different businesses.”

The numbers tell the story. The million square feet of space Arco had built housed some 5,000 employees at its peak. When Equus bought it, only 150 still worked in the complex. The daytime office population now stands at 4,000.

From restoration to expansion

But Equus had plans to add more: recall the live and play part of the package. Progress on that had gone into suspended animation when a rival developer filed suit against the company as it sought the necessary approvals for new construction. It wasn’t until 2015, when the state Supreme Court ruled in Equus’ favor, that the implementation of the total vision began in earnest.

A new Main Line Health medical center was the first major addition, followed by a Hilton Garden Inn hotel. Then, in late 2017, the retail component took shape in the form of a shopping center close to the crossroads. Whole Foods Market, several restaurants and local service providers occupy the cluster nearest the school grounds, but Spaeder admitted that the big traffic generator was the Wawa convenience store at Newtown Street Road and Winding Way. 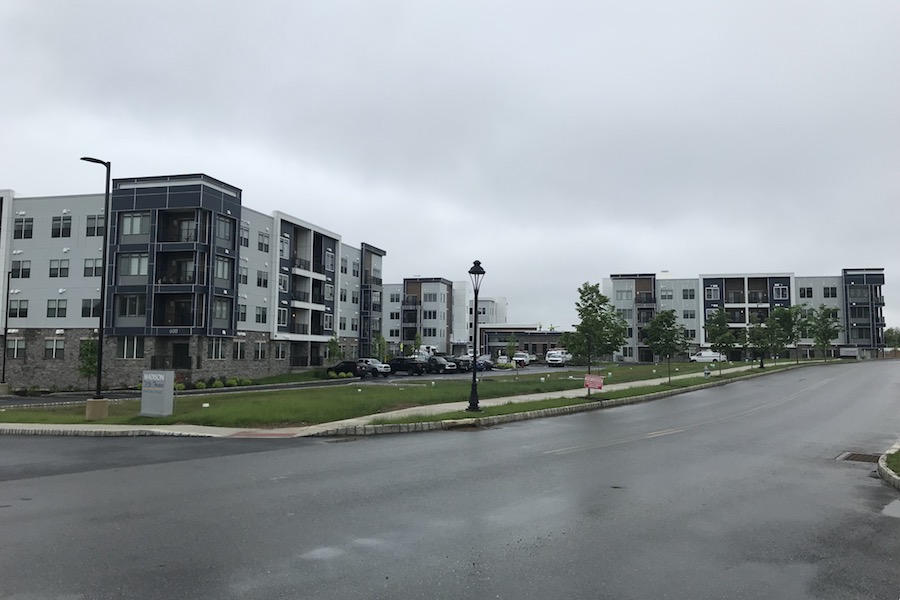 The Madison Ellis Preserve, nearing completion this past April. 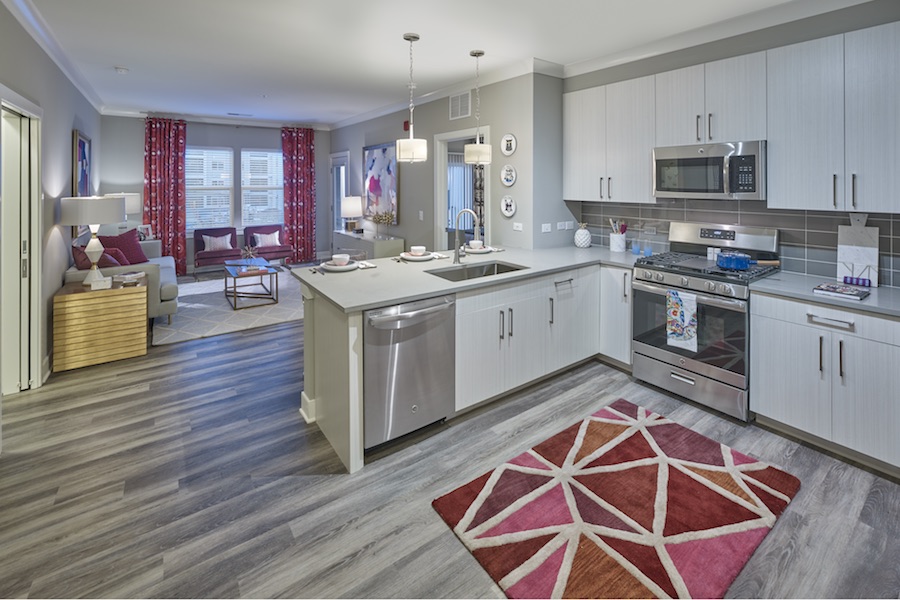 The next major component was adding the residents. That began when Equus built a 257-unit apartment complex run by its apartment management arm, Madison Apartment Group. Madison Ellis Preserve, now complete, offers luxury-level apartments surrounding a landscaped courtyard equipped with a pool, a fire pit and an outdoor kitchen next to the clubhouse. Equus also sold a piece of the site to Toll Brothers, which is building a 76-unit development of carriage-house-style residences called the Enclave at Ellis Preserve.

They liked it so much, they moved there too

Then, to top it all off, Equus followed in Arco’s footsteps by moving here from Centre Square.

“Our company had been at 1500 Market for 30 years,” Spaeder explains. “And when our lease came up for renewal, we weren’t as satisfied with our Center City occupancy as we had been in the past. We thought that it would be great for our employees to experience Ellis Preserve, not just because we think this is the workplace of the future, but also because embedded within it is all of our strengths and capabilities as an investor and developer. What better way for the employees of the company to experience what it is we do than on a day-in, day-out basis?” 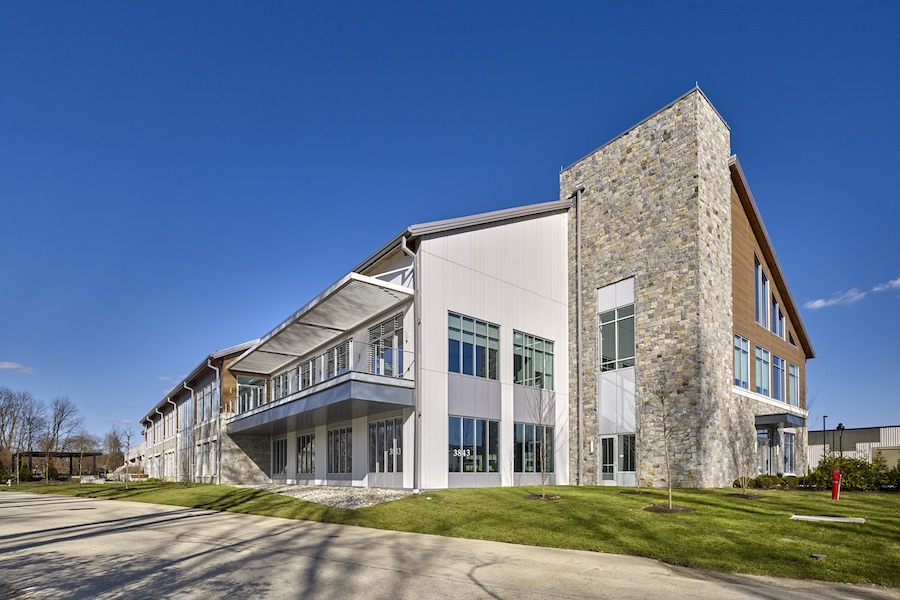 And the Equus staff do this in a striking new headquarters building custom-built for the firm, inspired by a barn, and incorporating both new technology and reclaimed materials. 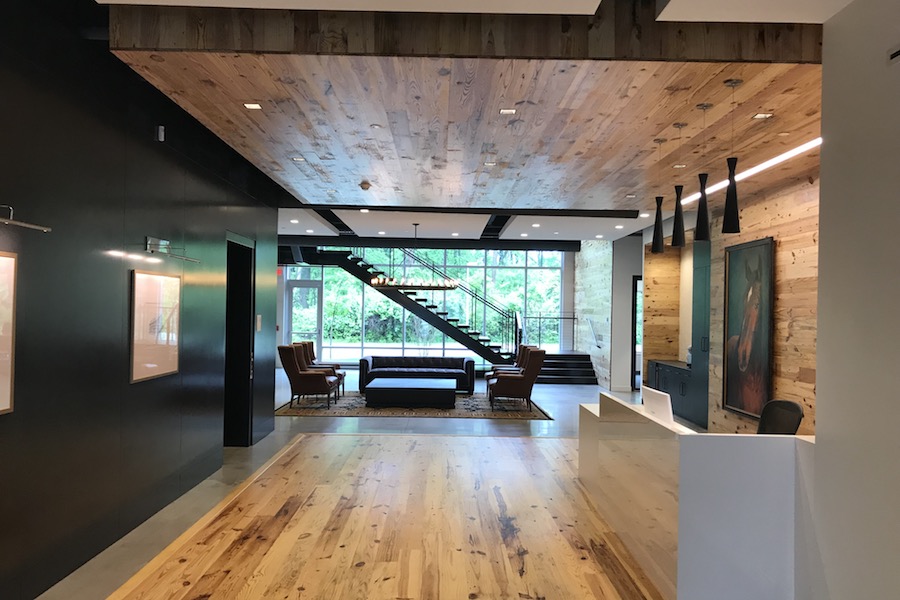 All of the walls, hardwood floors and structural support beams for the Equus HQ were made from reclaimed wood. 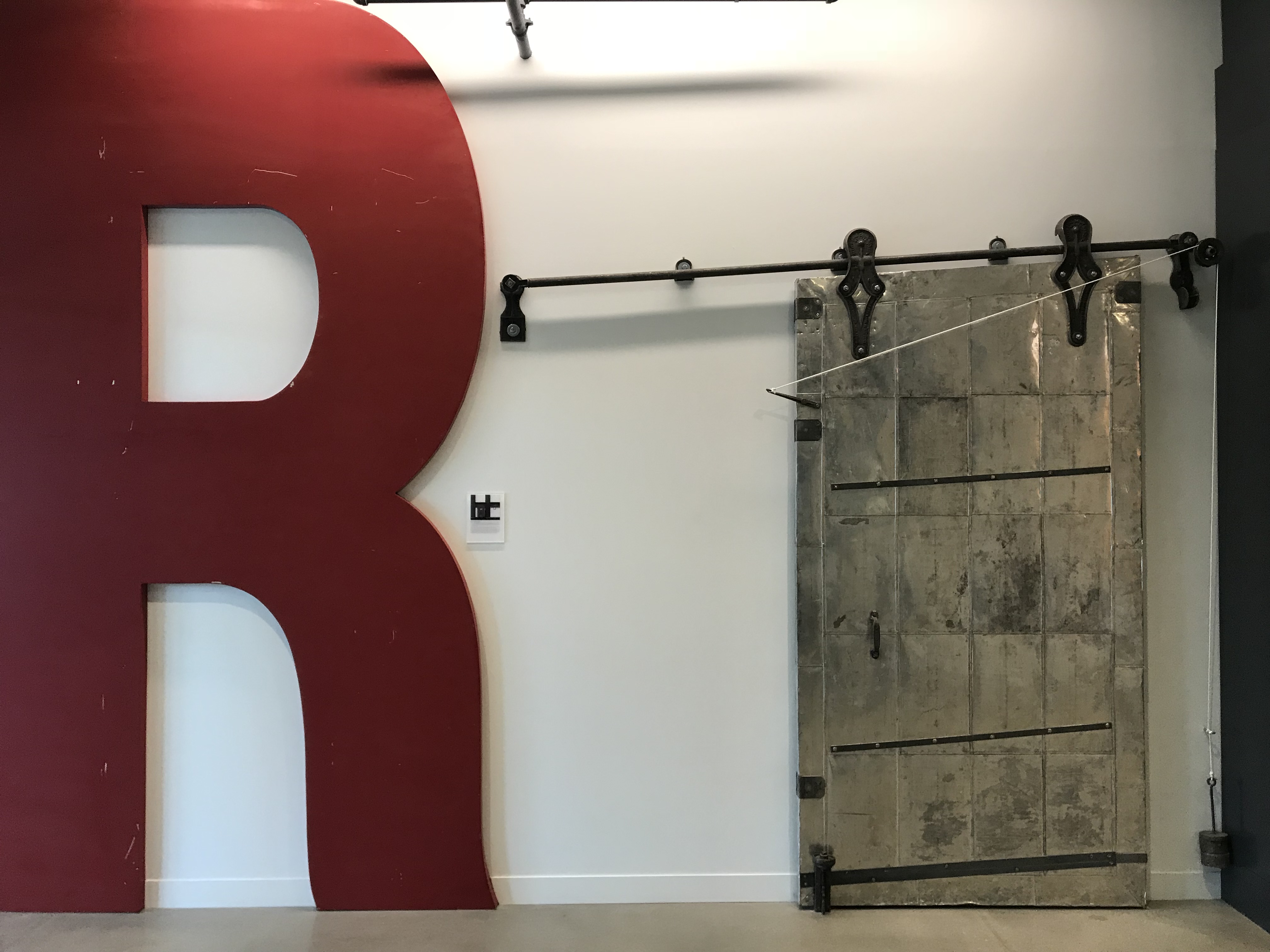 These items were salvaged from another Equus project, the conversion of the former Berkshire Knitting Mills in West Reading. “The R stands for redevelopment,” Spaeder says. 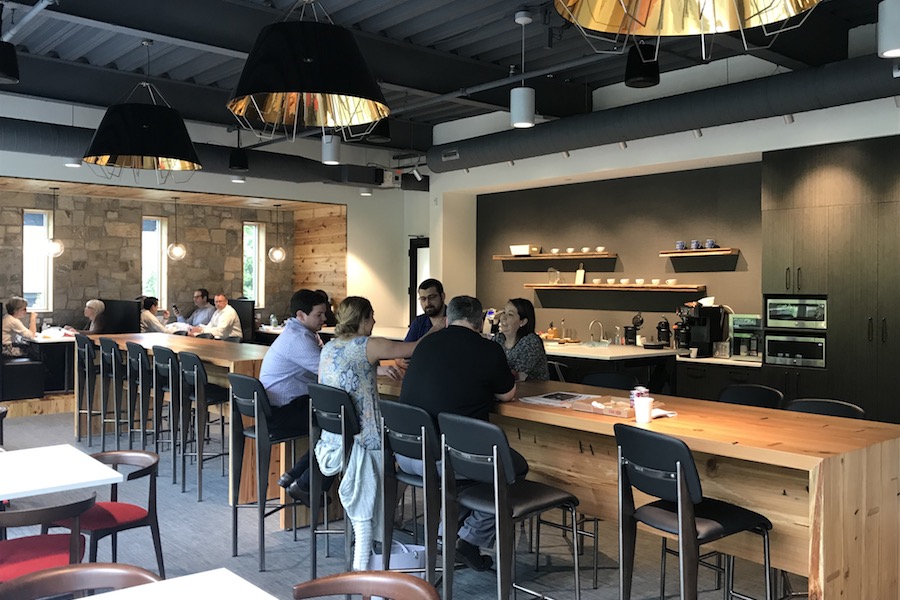 Equus staff have their own cafe seating area with an adjacent outdoor courtyard.

Items reclaimed from another Equus adaptive reuse project at the former VF Corporation complex in West Reading — provide visual appeal in the lobby, and historic blueprints and sketches from John Windrim, the architect of the original Ellis School buildings, are incorporated into a historical exhibit that traces the school’s star-crossed history. The new headquarters, Spaeder says, will receive LEED Gold certification for its use of both reclaimed materials and high-tech ones like mass timber beams.

Those old-timers might find it somewhat ironic that a developer that has helped further urbanize Newtown Square chose a barn as the inspiration for its headquarters. But if the rest of Newtown Square were as intelligently (re)developed as this historic plot of open land has been, maybe they would have much less to lament overall.

And Equus isn’t finished yet. The master plan calls for an additional 66 rental townhomes, additional retail shops next to the current ones, and a 270,000-square-foot office building built to tenant specifications. But all the basic elements of the Ellis Preserve village are now in place, arranged in a walkable, user-friendly package. It won’t bring back that long-ago Newtown Square, but it is making this one a more pleasant place to live.

Especially if you live and work there. That way, you don’t have to deal with the traffic at West Chester Pike and Newtown Street Road.