Panelists Ponder the Parkway’s Next 100 Years

A century after it was begun, the Ben Franklin Parkway remains unfinished. The Center City District restarted the conversation on how to finish it this week. 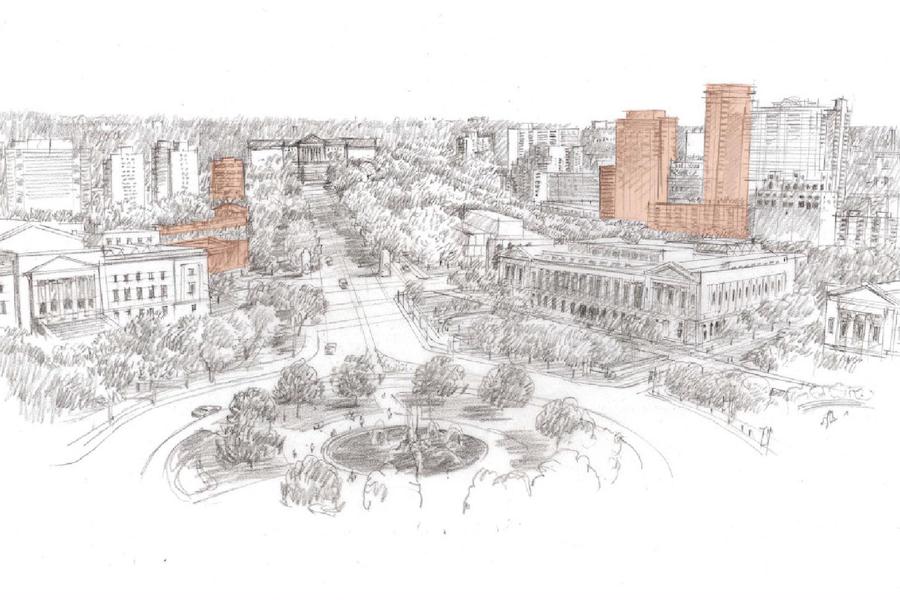 A possible vision for the Ben Franklin Parkway of the future. New infill buildings shown in brown. | Sketches: Laurie Olin

Back around 1917, when the Fairmount Parkway was just beginning its process of becoming, two Frenchmen produced what turned out to be rival visions for the boulevard we’ve come to call “America’s Champs-Élysées.”

One was architect Paul Philippe Cret, who would go on to leave his mark on the city in many other ways. The other was landscape architect Jacques Gréber. The architect produced a grand thoroughfare lined with civic buildings. The landscape architect sketched out a linear park whose trees defined its boundaries.

Despite efforts to implement the architect’s vision, the landscape architect ultimately won, and we’ve been lamenting the result ever since.

And so it was that this past Wednesday (Dec. 20th), a panel of notables who all had an interest in the future of the Benjamin Franklin Parkway sat down to discuss that future at the invitation of Center City District Executive Director Paul Levy. The occasion for the panel: The centennial of the start of the Parkway construction project in 1917.

Striking a balance between buildings and greenery

The lamentations notwithstanding, Philadelphians have come to cherish their grand diagonal boulevard. But, as Levy noted, the work remains unfinished. The panelists’ charge: Start the discussion on how to finish it.

Or, rather, restart it. As Parks and Recreation Commissioner Kathryn Ott Lovell noted, plans have already been put forth that have guided thinking on the Parkway’s future. Those plans led to such successes as the summer pop-up park at Eakins Oval, but the challenge remains one of producing something more durable.

Gail Harrity, president and chief operating officer of the Philadelphia Museum of Art, restated the central question of the Parkway’s identity: “Is the Parkway a green wedge bringing the park into the city, or is it a boulevard bringing the city to the park? We have to strike an appropriate balance between buildings and greenery.”

Which is what another landscape architect, Olin principal Laurie Olin, offered with his sketches of what a future Parkway might look like.

Olin’s envisioning of the various zones that would ring the outer Parkway.

Olin noted that the linear park opened up a gap between the neighborhoods of Logan Square and Spring Garden/Fairmount. He recommended buildings as the gap filler. “Let’s add some stuff that’s missing,” he said. “There’s missing urban fabric in the form of buildings.”

He also recommended that Pennsylvania Avenue, a diagonal street that runs parallel to the Parkway west of 22nd Street, be turned into an urban version of Miami Beach by adding more tall buildings.

Eakins Oval, he went on, would benefit from having lower-rise buildings such as conservatories ringing it.

He did not neglect the trees, however. Those, he said, should be planted on the other side of Pennsylvania Avenue from the buildings to help define that street better.

A mixed-use future for the Parkway?

Regarding what kind of buildings should be added, the panelists and attendees who weighed in on that subject agreed that they should contain a mix of residential and commercial uses. Granary developer Jim Pearlstein noted that what seemed to be a big risk 10 years ago proved to be prescient. “The demand for land next to the Parkway has been tremendous,” he said. Satisfying it, he continued, opened up the possibility of raising funds for the maintenance of the street and parkland through ground leases of adjacent land.

There is, however, one obstacle that stands in the way of truly exploiting that opportunity, and that’s the Parkway itself — not just its physical dimensions but also its use as a locus of outdoor civic events.

“Right now, the Parkway is a tremendous amenity for its neighbors with all the attractions along it,” said Logan Square resident Mark Silow. “But it’s also a 50 percent liability. Not a weekend goes by [from spring through fall] when the city’s not shutting it down. There isn’t an ethnic national parade attended by 100 people that doesn’t go down it; there’s not a disease there isn’t a run up it for.”

Although he said the city needed to better balance the desires of community and cultural organizations with those of the neighbors, Silow added that some of his neighbors have unrealistic desires too. “I joke with my neighbors that they made a huge mistake — they got off at the 23rd Street exit of the expressway when they meant to get off at Gulph Mills or Gladwyne.”

Judy Rogers, executive director of the Parkway Council, told the audience during the comment period that her organization was working with the city and other stakeholders to create a set of guidelines for determining whether an event needed to be on the Parkway.

The missing puzzle piece: Getting there

So a consensus seems to be forming that the Parkway’s future should be more of a mixed-use one, but one that doesn’t sacrifice the greenery. But will anyone be able to get there? I pointed out during the comment period that all the pieces of the puzzle except transportation were represented on the panel, and others both on the panel and in the audience agreed that getting to and around the Parkway rather than just zooming up and down it needed to be dealt with.

A potential solution to that problem lies underneath Pennsylvania Avenue: the tunnel that connects the City Branch railroad trench to railroad lines to the northwest. Together with the trench that feeds it, the tunnel could serve as the connection between Center City and the Parkway as well as the transportation alternative during Parkway events.

It’s not like no one’s thought of this before: Ed D’Alba of Urban Engineers pointed out that SEPTA had envisioned using the route as the central segment of a “Schuylkill Valley Metro” light rail line extending out to the suburbs. That idea died for lack of support from the city, however. “We could bring hundreds of thousands of people to the Parkway if we had a sustainable transportation system,” he said.

What everyone also agreed on was this: it’s time to start completing the Parkway in earnest and stop talking about its potential. “I’m sick of the P-word,” said Sam Katz, whose History Making Productions produced a 12-minute documentary on the Parkway’s past and future for the Center City District. “We are on the cusp of going to greatness.” The sort of leadership that transformed Dilworth Plaza into Dilworth Park, he said, would be needed to push the Parkway’s transformation along.

The organization Levy heads provided that leadership. The portion of the Parkway most in need of transformation lies outside its jurisdiction. Nonetheless, the Center City District is uniquely positioned to bring the various parties with an interest in the Parkway’s future together around the table to finish the job started in 1917.