Is AKA University City the Future of Philly Hotels? 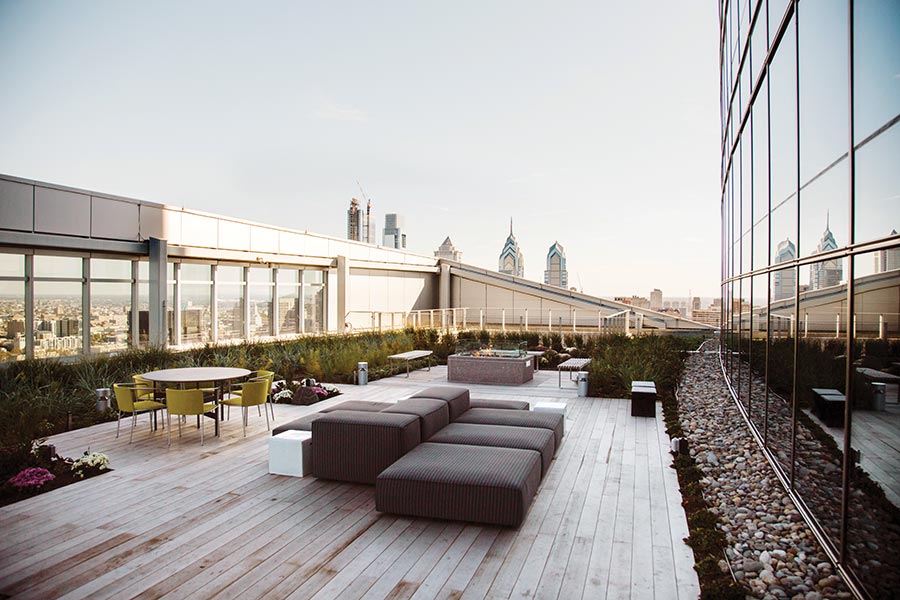 A deck at Level 28 at AKA University City. Photograph courtesy of Hope Hellmuth

In October, the finishing touches were put in place on Level 28, a “lifestyle club” for those staying at AKA University City in the FMC tower. (Non-hotel guests can also purchase memberships.) Luxury isn’t lacking in the 25,000-square-foot space: There’s a 72-foot-long stainless steel swimming pool, a fitness center with Peloton bikes, a movie theater, a 5,000-square-foot terrace where you can get lunch catered by Walnut Street Café, and a 3-D golf simulator that can transport you to “more than 36 of the world’s most exclusive golf courses.” Did you get all that?

This is a new era for Philly hotels, hard on the heels of developers who’ve filled the city’s latest residential buildings with out-of-this-world amenities — One Riverside, 500 Walnut and more. These spaces are setting the bar for what luxury looks like locally and moving Philly into unaccustomed glossiness: A whole new level of look-at-me design and fluff is becoming, well, the norm.

AKA is just the first. When the Four Seasons opens atop the Comcast Technology Center later this year, the Foster + Partners-designed hotel will be the tallest in the Northeast, with 38 suites and a lap pool that overlooks the city. Philly will also be home to an SLS Hotel — a brand that has only five locations to date, in places like Beverly Hills and Las Vegas. (If the project ever breaks ground, that is.) The interiors will be brought to life by world-renowned designer Philippe Starck. Yes, the Rittenhouse Hotel will always be our Plaza, but a new breed of posh is making its way to our town.

“Hotels are always going to reexamine what they’re offering to keep up with the demands of their higher-end clientele,” says Greater Philadelphia Hotel Association executive director Ed Grose. But why is this apparent boom — in ritzy hotels, specifically — happening now? “A lot of it has to do with the optimism of what we see in the future,” Grose says.

For Larry Korman, president of AKA, it also has to do with where Philly already stands on the global stage — thanks, in part, to events like the papal visit, the Democratic National Convention and the NFL Draft. “Philly is being looked at with a different eye, a romantic eye. … People are recognizing that it’s a great city,” he says.

A great city that’s bringing in a lot of overnight guests: According to Visit Philly, our city had 14.7 million overnight leisure visitors in 2016. For perspective, that’s an increase of 101 percent since 1997. Now we can wow all those out-of-towners with history and flash.

Published as “This is a Philly Hotel?” in the January 2018 issue of Philadelphia magazine.