The Pieces Fall Into Place on Market Street East

Some big pieces are still missing, but three large development projects portend a successful start to the "fifth phase" of existence for Philadelphia's Main Street. 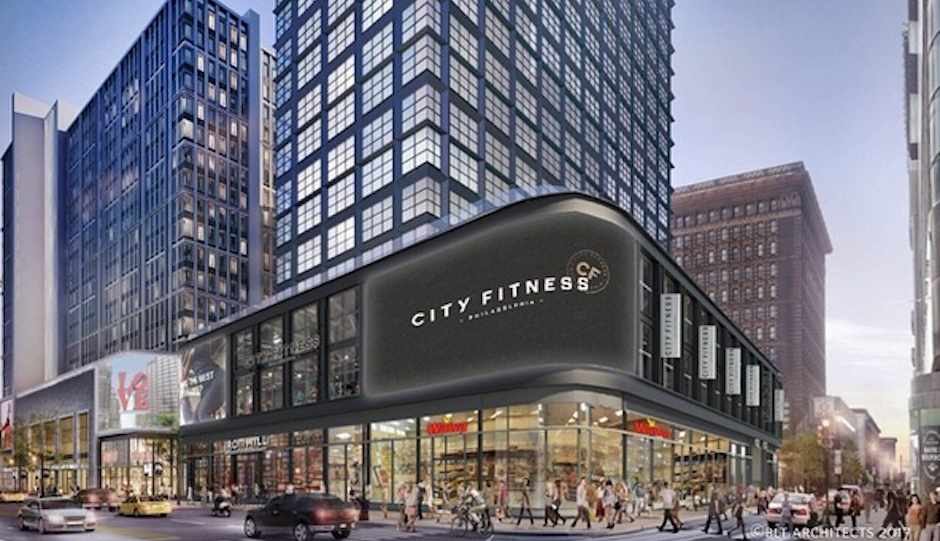 East Market is intended to be the linchpin of the transformation of Market East. Its developer and the two others that have placed the biggest bets on the street’s future delivered a progress report to Central Philadelphia Development Corporation members this morning. | Rendering: BLT Architects via National Real Estate Development

This morning’s announcement that AMC will bring an eight-screen deluxe cinema to Fashion District Philadelphia is merely the latest piece of evidence that a virtuous cycle of renewal may finally be coming to Market Street East.

The audience at today’s Central Philadelphia Development Corporation quarterly meeting at the Union League got an update on how that circle is being formed from the three developers responsible for getting the thing rolling: Mark Merlini, partner at Brickstone Realty; Daniel Killinger, managing director of National Real Estate Development, and Joseph F. Coradino, chief executive officer at PREIT. They also got a rundown on the progress each is making in finding tenants for their developments.

Coradino had the biggest news. Besides AMC and a previously announced 38,000-square-foot superstore for H&M, he announced that PREIT and its development partner Macerich had also landed several other retail tenants for what is now being called Fashion District Philadelphia, a total reworking of the old Gallery mall.

Jeans icon Levi’s, shoe retailer Skechers, outerwear outfitter Columbia Sportswear and women’s boutique Francesca’s will all be coming to the revamped shopping center. “All of these are first-in-Center-City stores,” he said.

Coradino also dropped hints about the dining destinations to come. One of the destinations, he said, will be a collection of restaurants called “Market Eats” that will cater to shoppers, visitors, and commuters headed to and from Jefferson Station on the center’s lower level. One of the eateries will be housed in an Airstream trailer while another will operate from a restored railroad car.

“There will be best-of-market, all-natural pizza,” handmade on the premises, he said. “There will be gourmet burgers and a sports bar that will have take-away cocktails so those commutes home will never be the same again.” All of the restaurants will offer table or counter service on the side facing the stores and grab-and-go options on the side facing the Regional Rail hub. What “Market Eats” won’t be, he said, is a typical mall food court, no more than the Fashion District will be a typical mall.

(Coradino said that he could not identify the operator of the eateries until it was ready with its own publicity.)

He also said that a European food retailer would be opening its first US location and that leases were in the works with unidentified apparel and cosmetics retailers who will also open their first Center City stores. Finally, one of the area’s anchor institutions, Wills Eye Hospital, will open a retail eyewear store in the Fashion District with Wills Eye ophthalmologists offering diagnostic services.

Killinger focused on the tenants who have recently opened or will take up residence soon in East Market. MOM’s Organic Market, which opened two weeks ago, is already posting huge sales figures during the work week. This, he said, stands in sharp contrast to the chain’s other stores, which are in suburban locations and do their biggest business on the weekend. The addition of some 1,000 new residents in East Market’s residential towers should help get the store’s weekend business up, he added. 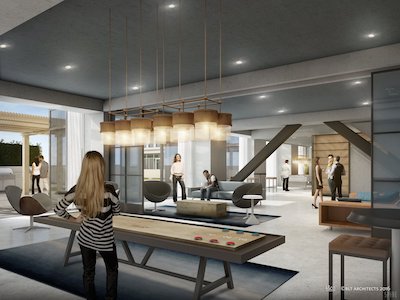 Those residents will start moving into the first of the two residential towers to be completed in East Market’s first phase this winter. The 322-unit building designed by BLT Architects will also have a T.J. Maxx/Home Goods store as a primary retail tenant. A second, 240-unit tower now under construction should be ready for move-in by next summer. An Iron Hill brewpub will anchor one corner while a Wawa will hold down the other. Killinger suggested the convenience store was a key amenity for the residents, up there with the lap pool, vegetable gardens and other amenities designed to appeal to upmarket tenants. “How do you rent 600 apartment units? You put a Wawa on the ground floor,” he said.

City Fitness, which will occupy the entire second floor of this building, may prove an even more important amenity for residents of Market East, however.

The interior pedestrian promenade the Iron Hill brewpub will face also contributes to National Development’s overall goal of making East Market a destination for more than its residents.

The design professions dominate the office tenants that are moving into 1100 Ludlow. Bohlin Cywinski Jackson Architects has already moved into its sixth-floor space, and the design center that will replace the former Marketplace Design Center will open its doors next month. Killinger also announced that National Development itself would move its offices here from Washington, where parent company National Real Estate Advisors is based.

Retooling a project that jumped the gun

Brickstone’s smaller-scale residential/commercial developments on the blocks surrounding the block National Development and its investment partners leased from the Estate of Stephen Girard have already added some potential MOM’s customers. Merlini did not give figures on how many units are occupied in its largest project, The Collins, but noted that all 12 of the units in the Baum’s building around the corner have been leased, with most of the tenants connected to adjacent Thomas Jefferson University and Hospital.

Merlini noted that Brickstone was ahead of the curve on the Market East revival effort. Its conversion of the former Lit Brothers department store into Mellon Independence Center and Market Place East in 1987-88 prefigured the activity now taking place to the west. The flagship store of the three-level Market Place East shopping complex was Conran’s, a home furnishings chain that offered stylish modern design at reasonable prices. Other tenants included Lane Bryant, Dress Barn and a sports bar and steakhouse owned by the Phillies’ Mike Schmidt. “Unfortunately, we were about 25 years too early” with the stores and restaurants, he said. Now that development is picking up nearby, Brickstone is repositioning the building; it has rebranded it as an homage to Lit Brothers and is recruiting stores for its retail spaces once again. One big get is Five Below, the pop-culture bargain retailer; the chain is both opening a flagship store and moving its corporate headquarters to the complex.

Market East begins its next phase…

Brickstone’s embrace of Lit Brothers hearkens back to what Levy called the “first phase” of Market Street’s evolution in his introductory talk. The advent of the electric streetcar in the late 19th century brought with it hordes of shoppers from distant points who flocked to the new department stores that lined Market Street, from Lit Brothers, Strawbridge & Clothier and Gimbel Brothers on the east to Snellenburg’s and John Wanamaker on the west.

Suburbanization in the 1950s touched off Market Street’s long, slow decline as the stores followed their shoppers out of the city. Planner Ed Bacon proposed a solution to this problem in the 1960s: a shopping mall with offices atop it, separated from street traffic. His idea got translated into The Gallery in 1977. Hailed at the time as a guide to the future for downtowns across the country, the mall instead helped further Market Street’s decline with its inward-facing orientation. PREIT’s retooling of the mall with its partner Macerich will correct that error by lining its outside with street-facing stores on Market and the north-south streets and restaurants along Filbert Street.

Both the Fashion District and the Lit Brothers project also plan to follow East Market into the new “mixed use” phase of Market Street. Plans for a residential tower atop the Lit Brothers building have been announced, and Coradino told the audience that he hoped to see the three towers that the Gallery was designed to support become reality as residential structures. “We’re adding the structures needed to support those towers at some cost,” he said.

Some pieces of this jigsaw puzzle still need to be assembled. The largest one would fill the hole left by the razing of the old Gimbels store at 8th and Market. PREIT holds a 40 percent ownership interest in the site, but its fate is in the hands of its majority owner, which has yet to come up with a Plan B to replace the failed Market8 casino-hotel proposal. The panelists also responded to an audience question about other to-do list items by identifying the 1000 block of Market and the empty lot at the northwest corner of 13th and Market as priorities. Developer Oliver Tyrone Pulver announced plans for a 38-story office/retail tower designed by Skidmore, Owings & Merill on that corner last winter.

Social issues also need to be addressed, the panelists said. “We have miles to go before we sleep” on addressing these issues, which affect not only Market East but the rest of Center City and downtowns across the country, Coradino said. “There’s a problem with homelessness that only seems to get worse and an opioid addiction problem that only seems to get worse.” Levy said that some of the solutions to these problems will have to involve the city; social service agencies will also play a role in addressing them.

“No one is saying Market East is done,” Levy said, “but a critical step forward has been taken.”