Requiem for a “Little Marble House”

The un-Jersey-Shore-like mansion in Avalon turned heads when it was built a little more than a decade ago. Now that its creator has moved on to something a little closer to the beach, it's being carefully dismantled by its new owner. 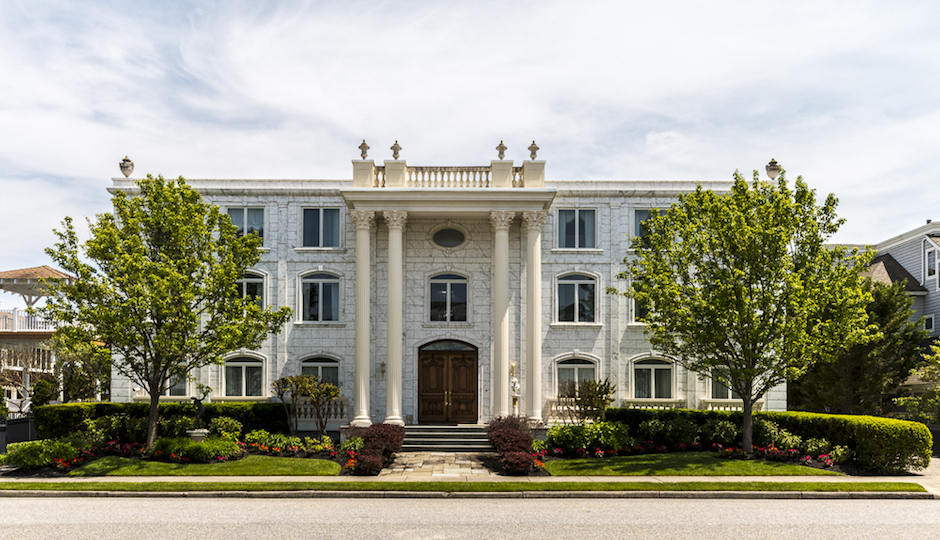 The Kantors’ summer home in Avalon, as it appeared in the summer of 2013… | Photo: Jim Meehan via Jack Vizzard, BHHS Fox & Roach Realtors

Jersey Shore homes tend to stick to a fairly modest architectural language of wood shingles and beams, following a traditional architectural vocabulary with some connections to the New England shingle style.

Which is why, when a Main Line matron with a passion for the art of 18th- and 19th-century Europe imported a different New England tradition to the dunes of Avalon, heads turned.

And now they’re turning again as the magnificent marble edifice she built with her husband is being disassembled piece by piece for distribution to architectural salvage buffs across the country. 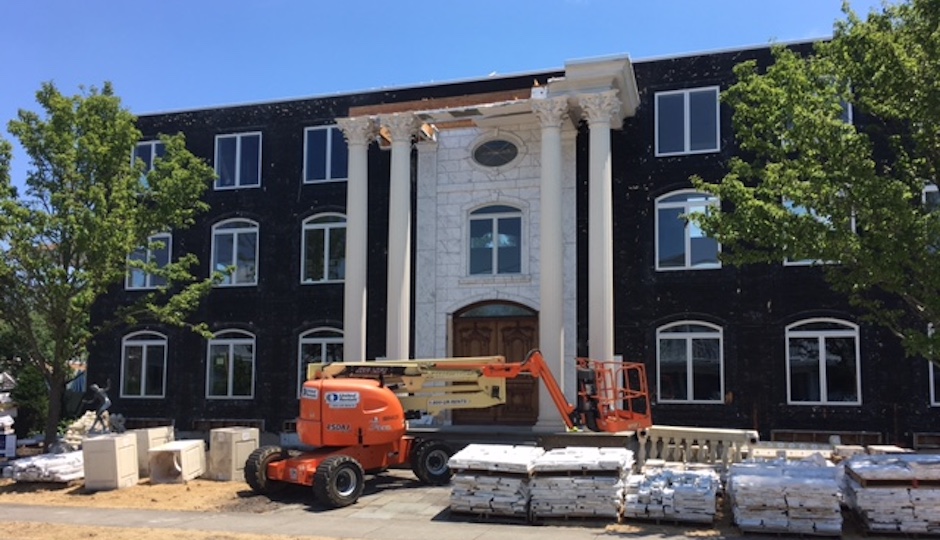 …and as it appeared a few weeks ago during dismantling, its marble outer wall panels meticulously stacked for shipping. | Photo via Jack Vizzard

The home in question was built as the summer residence of Andrea Kantor and her husband Warren. In exterior appearance, it was a virtual scale model of Marble House, the summer “cottage” William K. Vanderbilt erected in Newport, R.I.

For Kantor, the daughter of a prominent New York catering family, the mansions the grandees of the Gilded Age built in Newport held a special appeal, so she looked to them for inspiration when deciding on a place where she would enjoy spending time away from “Georgian Manor,” her expansive 40,000-square-foot estate in Villanova.

“I took photos of Marble House and the Elms, and I showed them to [architect] John Oliveri, who liked the idea” of constructing a smaller house in this style in Avalon, Kantor said. Oliveri in turn introduced the Kantors to the owner of a marble company that would supply the raw material for the house; Warren bought so much marble from the company that he ended up acquiring a one-third stake in it.

There are some other rough parallels between the Newport homes and the families who built them and the Avalon home and its builder. Families like the Vanderbilts and the Berwinds, who commissioned Philadelphia architect Horace Trumbauer to design The Elms, had only recently accumulated vast amounts of wealth, and they spent some of that wealth on spectacular summer homes designed for entertaining on a grand scale.

Like the Berwinds, the Kantors had come into their fortune only recently, largely through Warren’s role in founding Advanta Corp. and turning it into a financial-services giant. And also like that family, the Kantors had one foot in Philadelphia and the other in New York, where Andrea was the daughter of one of the city’s largest and best-known catering families.

The house Andrea built in Avalon was a scaled-down replica of Marble House on the outside, but on the inside, it was much more casual and modest than the Vanderbilt abode, in keeping with the prevalent vibe on Seven Mile Island. That didn’t stop heads from turning and tongues from wagging in Avalon when it was built, however. “I knew it was architecturally different from the other homes in the area, but I didn’t know the commotion I would cause when I built it,” Kantor said. “In the first three years, thousands of people drove by” to gaze at the home.

Much like her Villanova estate, Kantor’s summer home in Avalon was opulent without being ostentatious. She outfitted it with artwork and decorative items from 19th-century Europe, and she kept the color palette light: “I don’t like dark colors,” she said.

And when, after 20 years in the home, she decided they should move to a new one, she did much the same thing she did in Avalon, only in a more contemporary idiom. The move was prompted in part by a desire to be closer to the beach — 800 feet of dunes separated the Kantors’ Avalon home from it while their new summer home in Stone Harbor sits only 200 feet away — and in part by a desire to downsize: their two-story Stone Harbor home has just 3,000 square feet of space where their old place in Avalon had 4,500.

While the Stone Harbor house was under construction, Kantor tapped Jack Vizzard, an Avalon-based agent with Berkshire Hathaway HomeServices Fox & Roach Realtors, to find someone who could take care of the Avalon home.

Vizzard did his best to find a buyer who would value the home the way the Kantors had, for the home was built to last, using a steel skeleton frame and marble outer panels attached to the walls with hurricane clips. Kantor pointed with pride to the fact that the home suffered no damage from the storms that have swept up the Jersey coastline, including Superstorm Sandy.

Two buyers did make offers on the home with an eye on occupying it. One was unable to obtain a mortgage large enough to cover the purchase price, so he had to back out. The other submitted a bid 12 hours after the Kantors had agreed to accept an offer from a commercial developer in the Philadelphia suburbs who planned to dismantle it, sell the materials and donate the proceeds to charity. The Kantors were willing to consider that last-minute offer, but “the buyer then changed his mind,” she said.

“I thought Jack used every resource possible to sell the home, and this was the result,” she added. The home ultimately sold for $3.5 million, a far cry from the original asking price of $12.5 million set when the home was first put on the market eight years earlier.

The consolation is that the home’s materials and furnishings will end up in the hands of people who should value them as much as Kantor did. “I think of it as kind of like what happened after Elizabeth Taylor died,” she said. “Her jewels are being distributed throughout the United States, and now [our] Marble House is being distributed throughout the United States.

The dismantling is well along as of this writing, and once again, the work is turning heads in Avalon. But since the buyer is not using bulldozers or wrecking balls to remove the house, the neighbors are copacetic with the progress.

One charity the buyer might want to consider donating the proceeds to is the Children’s Crisis Treatment Center, a social service agency based in Fishtown that specializes in providing behavioral health services to children who have experienced childhood trauma. Kantor and her husband are the chairs of its annual “Roundup” fundraiser, which takes place this year on Nov. 3 at the Curtis Center, and with the proceeds from the salvage, the buyer could purchase plenty of tickets to the event.

Kantor said that now that she is retired from a career in the law, she intends to devote her life to charities like CCTC that help children, her domestic life in Villanova and at the shore, “and of course my husband.” (Warren is also involved in charity; he founded a nonprofit called the Benefits Data Trust that develops and deploys data-driven strategies that help low-income individuals and families get the assistance they need to improve their lives.)

The Stone Harbor house is designed by Asher Associates, a Jenkintown- and Stone Harbor-based firm that specializes in the Jersey Shore vernacular; the firm has made a specialty of combining the traditional Shore vocabulary and materials with a contemporary sensibility. Like the Avalon Marble House was, this home is designed to become an heirloom: “In Stone Harbor, people keep their homes for generations,” Kantor said.

If she’s fortunate, her own children may come to inherit a modern Jersey Shore tradition.

The Avalon Marble House, Then and Now 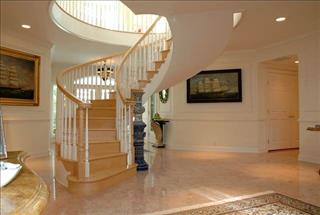 The foyer, taken from the home's listing 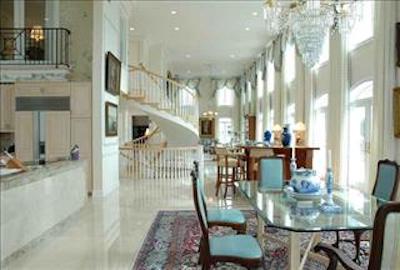 The dining room and great room, from the listing 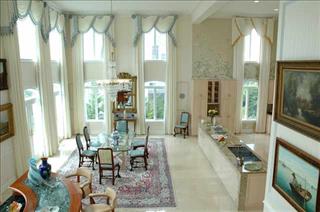 View of the dining room from the foyer balcony, from the listing 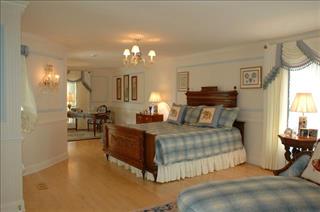 The master bedroom, from the listing 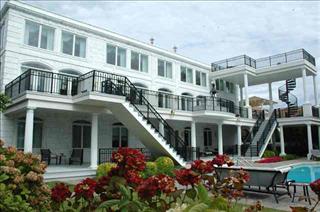 The rear elevation, from the listing 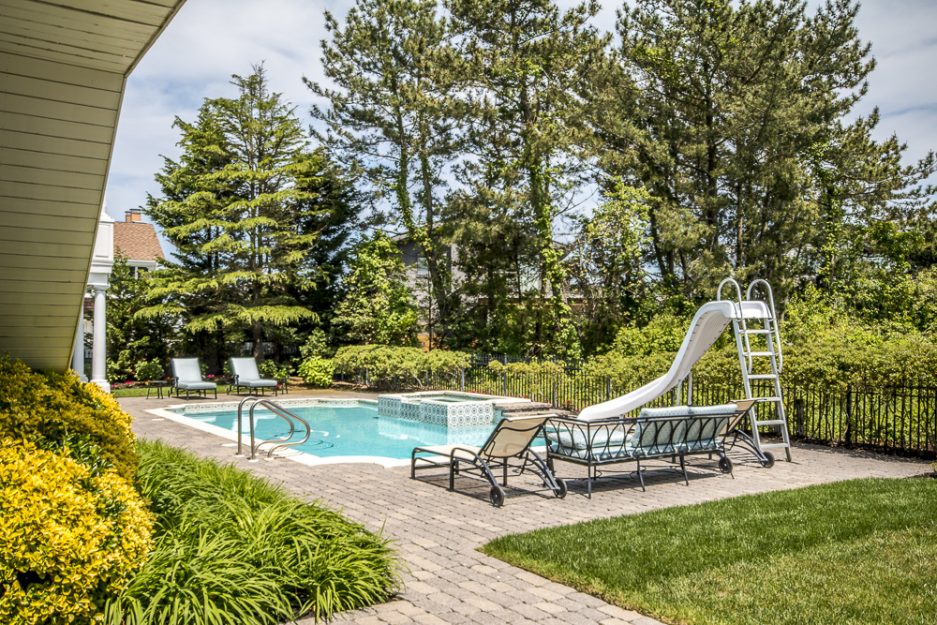 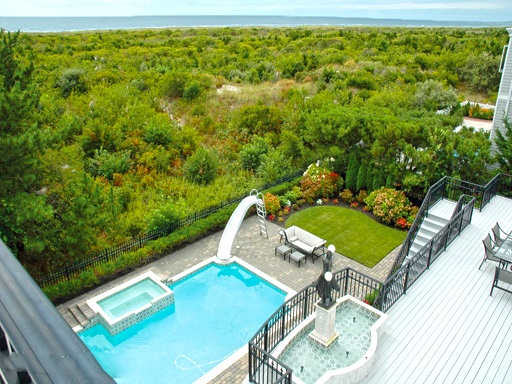 The pool and the dunes, viewed from the rear roof deck 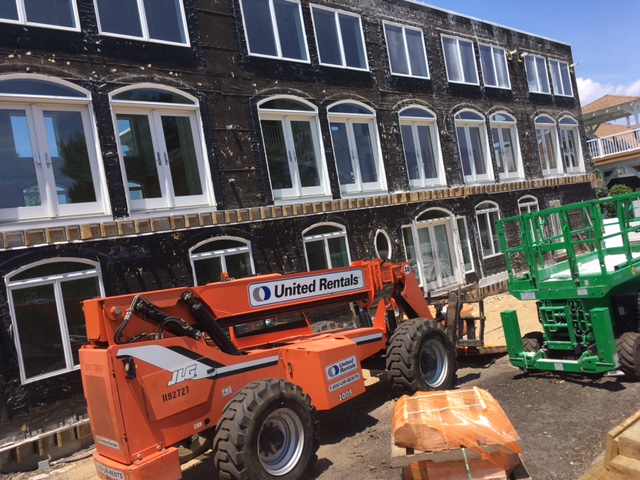 The rear facade, stripped of its cladding 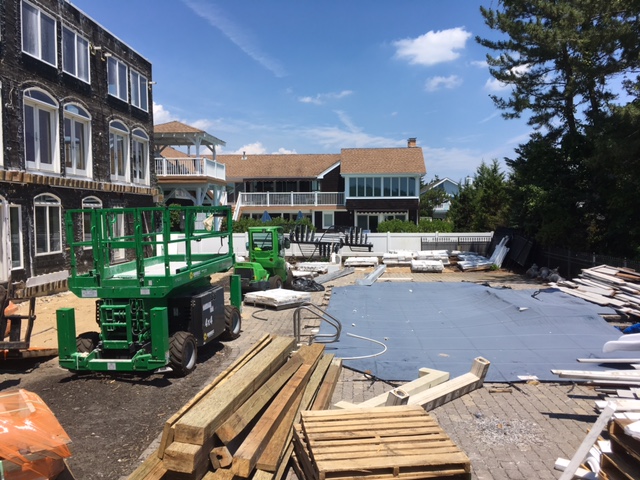 The pool is covered as the house is being dismantled