The remaining tenants at the Wynnefield apartment complex say they need more time to find suitable new apartments - and that the owner's actions make finding them even harder. 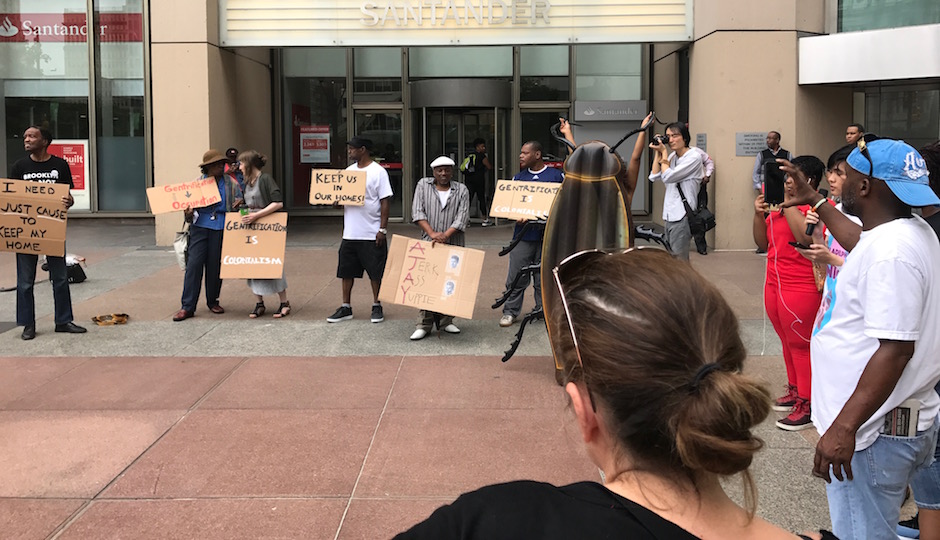 About 40 Penn Wynn Manor residents and their supporters in the Philadelphia Tenants Union staged a protest in front of the Centre Square office complex today at noontime to protest the actions of the building’s new owner, Cross Properties. The remaining residents of the Wynnefield apartment tower, who the union is representing in their dispute with Cross, say the owners are both giving them too little time to find new living quarters and making it difficult for them to rent suitable new apartments.

Residents received notices slipped under their doors Jan. 17 notifying them that the new owner would not renew their leases. A sizable number of the building’s 239 apartments were occupied by disabled veterans, housing voucher recipients, and other tenants with special housing needs.

Some residents did not leave when their leases expired, claiming that they could not find suitable replacement housing and that the landlord’s refusal to refund security deposits on the day they move out left them unable to afford the cost of moving.

One of those who did not move was Karen Harvey, 64, a retired social worker who had lived in the building for seven years. Harvey, who lives on Social Security disability payments, said, “June 20 is about 20 days away, and there are still 35 of us here, and we haven’t found suitable housing yet.”

Her problem, she said, is that she can’t find anyone who will rent to her in a decent neighborhood – a problem exacerbated by the two judgments Cross has obtained against her in landlord-tenant court since her lease expired at the beginning of March. Without going into detail on the nature of the dispute, Harvey said, “It’s not that I was completely innocent, but the problem was created by them.”

Or by the previous owner, who Harvey said had let the building deteriorate. “There’s mold in every apartment,” she said, and the repairs the new owner made to resolve the problem proved ineffective.

Harvey was one of several residents who contacted the Philadelphia Tenants Union about their dispute in March. “They have worked tirelessly on our behalf,” she said, and their efforts led her to join the organization and become its secretary.

The union had gotten Cross to agree to let the remaining tenants stay until June 30 after having set an eviction date of June 1st earlier. The group maintains this is still not enough time for them to relocate and are continuing to press to have the deadline extended to Sept. 1st. “And we’re asking them to refund our security deposits on move-out day” so they can afford to pay their moving costs and to “stop the harassment” of lawsuits.

The tenants staged a previous protest to call attention to their demands on May 10 on the grounds of the building on Bryn Mawr Avenue.

According to Office of Property Assessment data, an acquisition arm of Cross Properties, CP Acquisitions 30 LLC, purchased the building in November 2016 for $16.35 million. The current PTU newsletter states that the “residents…are being evicted so that a big nearby university” — presumably, St. Joseph’s University — “can refurbish the building and rent it out again to richer college students paying a much higher rent and increasing profits for the landlords.”

A news release issued by the PTU this morning stated that the protest was targeting Cross Properties Partner and Chief Evangelist Ajay Raju. The release mentioned a 2014 Philadelphia magazine profile of Raju and his wife that noted their home was worth $3.1 million and that his shoes cost up to $12,000 a pair. Several of the picketers at today’s protest carried signs lampooning Raju’s extravagance, and Harvey’s daughter rallied the crowd at one point by saying, “Tell you what. We’ll move out if we all can move in with you.”

Cross Properties officials declined to comment when asked for a response in person.