This one involves a subdivision the company wants to build on a farm in Westtown Township. Opponents say it would ruin the site where the Battle of Brandywine began. 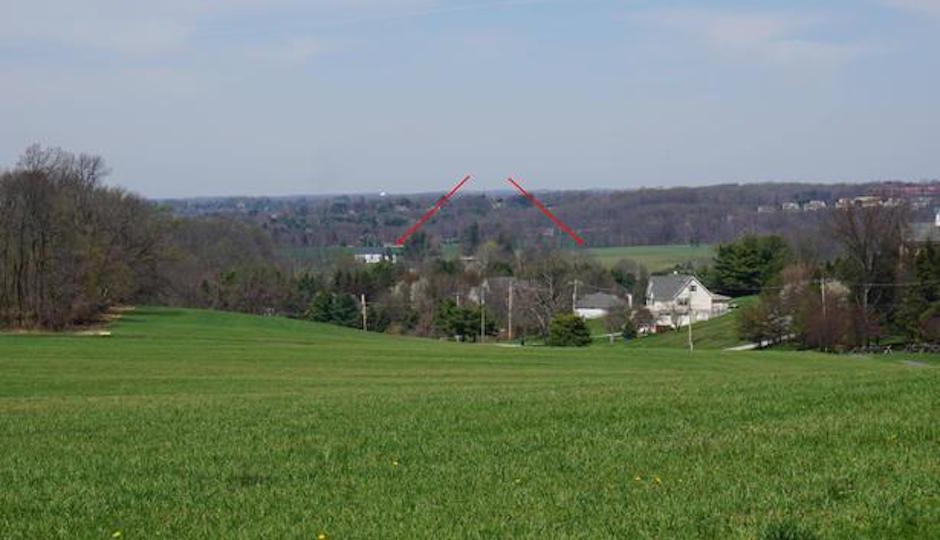 The arrows in this photo posted to the Neighbors for Crebilly Farm website point to where American Gen. Adam Stephen would have spotted Hessian soldiers marching across the farmstead from his vantage point at Sandy Hollow. Opponents claim a plan by Toll Brothers to build homes on the farm site would destroy an important piece of Revolutionary War history.

As if the low-grade fight over its proposed condo tower on Jewelers Row weren’t enough, Toll Brothers now finds itself in another historic preservation fight involving a housing development it seeks to build.

Call this one the Second Battle of Brandywine.

The battlefield for this one is a parcel known as Crebilly Farm, a 325-acre “gentleman’s farm” located just north of the main battlefield in Westtown Township. According to those fighting to preserve it, this farm is where the battle began: The first skirmishes took place on the farm on the morning of Sept. 11, 1777, when American Gen. Adam Stephen spotted Hessian troops marching across the farm from his lookout atop Sandy Hollow, where the main battle would take place. Stephen dispatched a party of soldiers to the farm to frustrate the Hessians’ advance towards the American position.

Toll Brothers has filed plans with Westtown Township to build a 317-unit housing development on the Crebilly parcel, consisting of a mix of single-family detached homes and townhouses. Toll has pledged to keep most of the site open and preserve its most important historic resources, but its neighbors aren’t buying their argument.

“They say they would leave 60 percent of the space open, and that’s an outright lie,” said Ken Hemphill, communications coordinator for Neighbors for Crebilly Farm (NFC), one of two grassroots groups fighting the proposal. “Their development would take up most of the site, and the open space would be trapped by rings of houses.

“Some of the other open space is land they would need to build the sewage disposal system, so it’s not even land you could walk across for fear of compacting the soil.”

This second Battle of Brandywine is being fought in a series of conditional use permit hearings before the Westtown Township Board of Supervisors.

According to Hemphill, the township Planning Commission was about as keen to see the site developed as the neighbors are. “They ultimately approved [the conditional use application], but in effect, they said ‘No,’ because they attached 51 conditions to it, including moving a historic tavern away from Route 202, preserving all the buildings on the property and building new roads.

“We have no doubt that if the board of supervisors approves the conditions, Toll will sue.”

So far, the supervisors have held four hearings since February to assess the project’s impacts on the site’s historic resources and traffic on local roads. Perhaps signaling its likely stance on the permits, it has granted the Planning Commission and NFC “party status,” which means their members can question Toll officials on their claims about the effects of their proposal on the farm’s historic resources, traffic in the area and town finances.

Hemphill described the township supervisors as caught between a rock and a hard place. “The supervisors have to abide by the Pennsylvania municipal code,” which stipulates that municipalities must provide for all possible types of development within their borders and cannot reject proposals that conform to local land-use rules, “but it’s clear they don’t want this, and their questions reflect the displeasure they have over this plan,” he said.

“Everybody in the area wants to save this farm. It should be a county park or part of the Brandywine Battlefield.”

Toll Brothers officials did not respond to repeated requests for comment.

Two more hearings on the conditional use permit are scheduled for Tuesday, June 20th, and Tuesday, July 25th, from 6 to 10 p.m. in the Bayard Rustin High School auditorium, 1100 Shiloh Rd., West Chester. More meetings are likely in the months ahead, but Hemphill said NFC is in this fight for the long haul. “I worked with the Beaver Valley preservation effort,” he said. “It took us four years, but we were ultimately successful in saving it. I’m sure Toll knows that a lot of people who were involved in the Beaver Valley effort are now in the Crebilly fight, so they know we’re in it for the long run, and it would be in their interest to come up with a conservation solution themselves.”

Updated May 31, 4:04 p.m., to correct information about who has party status in this process. An earlier version of this story reported erroneously that Crebilly Farm Friends was also granted party status; it does not have that status.