The first units in a city-sponsored program to stimulate production of single-family workforce housing were formally unveiled in East Poplar on Wednesday. 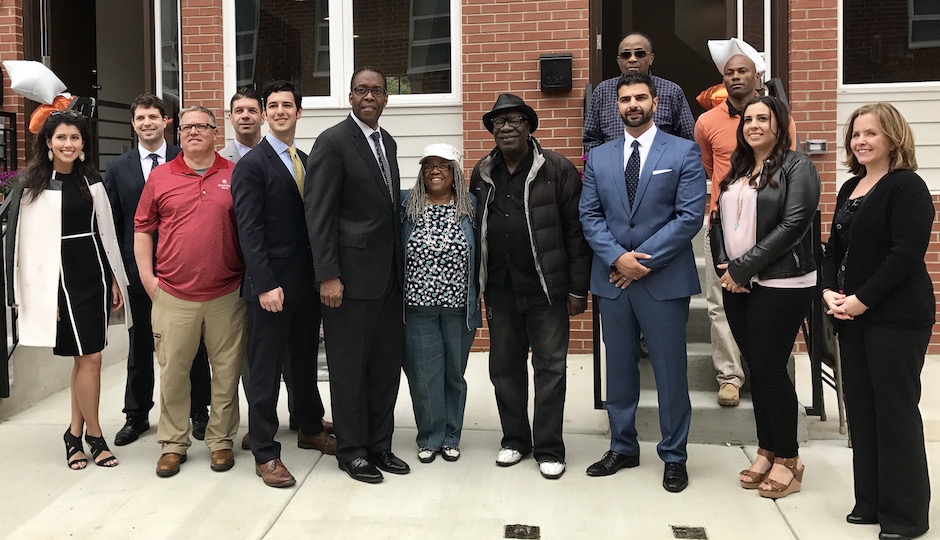 Late on Wednesday morning (May 24th) in East Poplar, City Council President Darrell Clarke, Philadelphia Redevelopment Authority Executive Director Greg Heller, and representatives of BMK Properties, a subsidiary of The Riverwards Group, cut the ribbon on the first 13 townhomes to be built under a city-sponsored program intended to stimulate the production of workforce housing.

These three-story townhomes, work on which began last November, have three bedrooms and two bathrooms each. They are equipped with dual-zone climate control systems and water heaters that are at least 92 percent energy efficient.

These units, however, are really aimed not at the single individuals but at the families of five. They express the main goal of the workforce housing initiative Clarke announced last summer: to provide spacious, market-quality single homes for working families at below-market prices.

The mechanism by which this goal was achieved here and will be achieved elsewhere is through the sale of city-owned land at nominal prices. This, explained Riverwards Group Managing Partner Mo Rushdy, enabled the firm to sell the homes for much less than they would have sold for otherwise.

Both the city and BMK subsidized the cost of the units, the city through the land transfer and the developer through accepting smaller profit margins. The PRA, which issued the request for proposals that BMK responded to, helped, Rushdy said: “The Redevelopment Authority set things up so we could get the permitting, engineering and legal work done quickly and still make some money.

“We shared our margins with the authority. They’re about half what we would typically make on a home of this type. It was a compromise with the city and a way of giving back to the city.”

The units themselves, Rushdy said, are of the same quality as their market-rate units. “These have hardwood floors, granite kitchen countertops, multizone HVAC, and tile bathroom floors and shower walls.

“And every buyer got to customize their house. Every buyer got a three- to four-hour session with a design consultant in order to choose cabinets, finishes and tile patterns. It’s what we do with every house we build, and it’s what we’re doing with these as well.”

Rushdy said Clarke “went through the homes and was impressed.”

In exchange for these units, the buyers also have to give up a little something, namely, the right to turn around and sell them at a profit. That they cannot do until 10 years have passed.

Rushdy said that the Riverwards Group considers the approach Clarke took with his workforce housing initiative superior to the multifamily approach several private builders have taken. “We believe that there is a perception that with workforce or affordable housing, that makes single-family homes out of the question, it makes backyards out of the question, and it means stacking houses on top of one another,” he said. “We think multi-family is risky for workforce housing because then you have to set up condo associations. Then you’re talking about common areas, homeowners paying monthly fees, who’s paying and who’s not.

BMK has already received a second contract from the PRA to build more homes of this type in Francisville. This next project will consist of 32 units of at least two bedrooms each. The company hopes to close the sale of the land in July and begin construction shortly thereafter. It has also submitted a third proposal in response to a request from the PRA under this program. “We’re shooting for 25 to 30 percent of our homes being workforce housing,” Rushdy said.