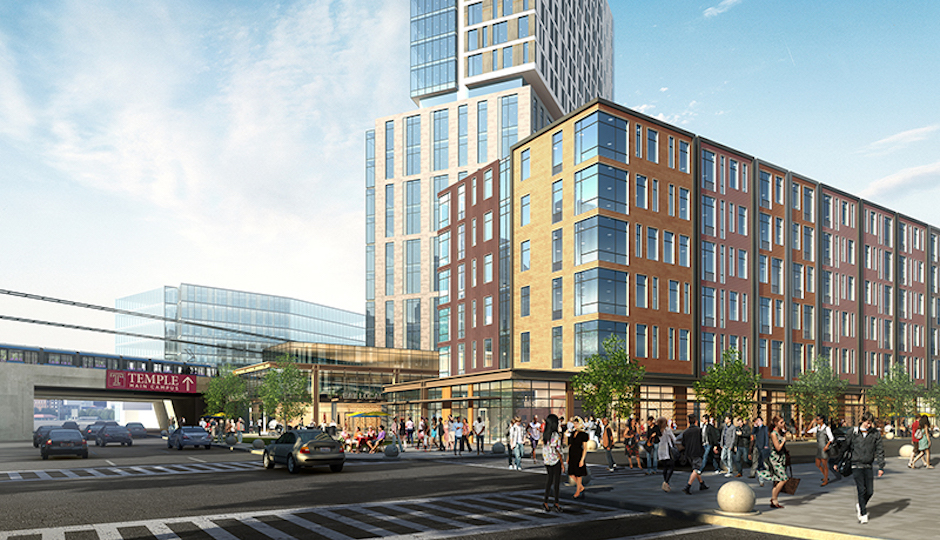 A group of New York real estate investors has been working quietly behind the scenes to assemble land for a project that would be truly transformative for North Philadelphia.

As of last Saturday, their project has come out of the shadows.

The Philadelphia Inquirer reported March 18th that an investment syndicate led by HFZ Capital Group plans to build two new mixed-use buildings and renovate a third on land it has acquired around North Philadelphia Amtrak station.

The three proposed buildings all lie to the north of the Northeast Corridor tracks. One, a six-story building containing 105 apartments, would be sited at the southeast corner of Broad Street and Indiana Avenue; a second, 21-story tower with 128 apartments and about 214,000 square feet of office space, would be located just south of the first, next to the tracks. Both buildings would also contain street-level retail space.

The third building is an existing vacant industrial building on a wedge-shaped parcel between 16th Street and the SEPTA Chestnut Hill West Line tracks. This structure would be rebuilt to provide 180,000 square feet of space for light manufacturing and start-up firms.

The initial phase would also include some improvements to the train station itself, in particular the restoration of a tunnel connecting it to the adjacent North Philadelphia subway station on the Broad Street Line.

The total cost of this first phase is $162 million, not counting about $7 million the group had spent on site surveys and preliminary studies or the $2.1 million it spent to buy the four-acre parking lot on which the new buildings will sit from Amtrak and SEPTA. The lot with the vacant building is under agreement of sale.

The investors have also applied for a $20 million grant from the Commonwealth of Pennsylvania’s Redevelopment Assistance Capital Program to cover work on the non-residential parts of the project.

The investment group plans additional phases of development following this one. Those phases include redeveloping a triangular plot of land bounded by 16th Street, Indiana Avenue and the ex-Reading SEPTA Ninth Street main line consisting of several dozen privately owned parcels, many vacant or abandoned, and redevelopment of the shopping center built by Posel Management in the late 1990s to the south of the tracks, not including the original North Philadelphia station building that is now part of the shopping center.

HFZ is headed by Ziel Feldman, a prominent New York real estate investor and developer. Two other New York firms are participating in the syndicate, and Amtrak itself owns a minority stake in the venture.