Drexel's new mixed-use tower at 32nd and Race offers a little something for everyone around it as well. Ground was ceremonially broken one week ago for Vue32, the new apartment tower Radnor Property Group (RPG) is building and will manage for Drexel University at 32nd and Race streets. But a recent hard-hat tour of the site reveals that work on the foundation and substructure is well under way.

RPG President David Yeager led us on a hard-hat tour of the construction site and explained why the slender 16-story tower looks the way it does and how all the pieces of the project, which also includes a row of townhouses, fell into place.

Yeager worked with Drexel President John Fry on a series of redevelopment projects on and around the Franklin & Marshall College campus in Lancaster, and now that he’s back in Philly, Fry has turned to Yeager and his company again to help him carry out Drexel’s master campus plan. The Vue32 project advances two key elements of it: reducing the pressure on off-campus housing in Powelton Village by providing more apartments for members of the Drexel community and promoting homeownership by Drexel faculty and staff in the neighborhood as well.

The project consists of both the tower now under construction and 12 townhouses that will rise on the lot’s north edge, facing Summer Street and matching the scale of the existing homes on the 3200 block of Summer. The townhouses, work on which will begin after Vue32 is complete, will be among the first of 250 units of ownership housing Drexel has committed to build under its master plan. As at Penn and F&M, campus faculty and staff can obtain low-interest mortgages for their purchase, and those already living in the neighborhood are eligible for forgivable loans for improvements to their homes.

Yeager’s description of the path the project took from idea to reality sounds a bit like putting pieces of a jigsaw puzzle together. But having learned the Fry approach to community redevelopment at F&M, and having engaged with another community in similar fashion on RPG’s 3737 Chestnut tower, he already knew the steps involved going in.

Councilwoman Jannie Blackwell, who had advised Yeager to reach out to the community on the 3737 Chestnut project, repeated that advice here.

“This was challenging because the zoning classification on the site is bifurcated,” Yeager said. The south half of the L-shaped lot, which stretches all the way from 32nd Street to Natrona Street along Race, is zoned for moderate-density high-rise commercial mixed use, while the north half, along Summer Street from 32nd Street west, is zoned for residential townhouses and row houses with a height limit of 38 feet.

RPG and project architect Erdy McHenry developed 10 different site plans and designs for Drexel, the neighbors and the Powelton Village Civic Association to ponder. The neighbors’ chief concerns were:

Respecting the scale and composition of the Summer Street block. This was perhaps the easiest part, as it merely required building the types of townhouses allowed under the Summer Street lot’s zoning.
Providing adequate sunlight for the community garden to the site’s west. “The tower was pushed as far to the east as possible,” Yeager said, in order to meet this requirement.
Maximizing open space and views for both tower and neighborhood residents. “The neighbors allowed us to increase our building height in order to reduce its footprint and maximize plaza space,” Yeager said. The tower is also turned at an angle so its apartment windows face southeast, offering excellent views of the Center City office district. Neighbors who use the ground-level plaza and promenade will also enjoy enhanced views thanks to another demand they made:
Burying the parking. “The neighbors did not want to see any parking,” Yeager said. As the building was already slated to contain fewer parking spaces than required under the zoning code, putting the smallish garage below ground would not be a problem once the necessary variances were obtained. The lot’s downhill slope to the east also helped the architects achieve this goal. By keeping the plaza level with the west edge of the lot, the design opened up space for an at-grade garage entrance on 32nd Street while providing an elevated promontory from which users of the building’s entrance plaza could enjoy better views of the Center City skyline. A promenade along the site’s south side with steps leading to 32nd Street provides public access to both plaza and building.

“Getting a design that the neighborhood embraced resulted in 14 variances that were required,” Yeager said, “That’s the only time I’ve had to get 14 variances for a project, and I hope I don’t ever have to do it again. But it worked.”

The apartments are aimed at graduate and professional students and working families, both affiliated and unaffiliated with Drexel. The building’s main commercial tenant, a day care center, was chosen for the space because of the building’s purpose. (A bike shop will also occupy space in the building.)

Work on the service core of the building had already progressed past the digging stage on our visit, as reinforcing bars for a concrete foundation were already in place, but there was still digging taking place on the west side of the Race Street lot. The digging has unearthed foundations of homes that had stood on the site, and bricks and other usable materials are being salvaged for reuse. Some, such as the brownstone steps of some houses that were demolished, have been donated to the Summer-Winter Community Garden in the next block west.

When finished, Vue32 will have 164 apartments ranging in size from junior one-bedroom to three-bedroom units in a 16-story tower. Amenities include a fitness center, a community room with a fully equipped kitchen, a game room and a rooftop deck with fire pit, cooking facilities and clear views of the Center City skyline to the southeast. The garage contains 32 parking spaces for cars — Yeager explained that the building’s proximity to both Drexel and the regional transportation hub at 30th Street Station meant that “parking was not a priority” — plus bicycle storage. The $56 million development, which is being financed privately, is scheduled for completion in the spring of 2017. 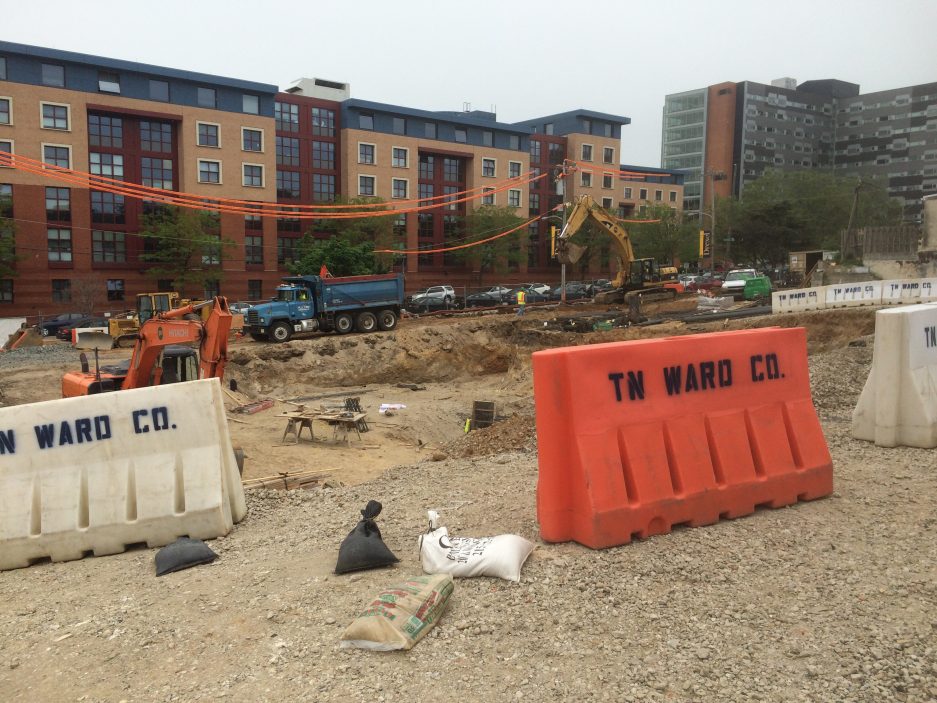 Get rid of the tax abatement, a city-commissioned study says, and expect to see a lot less of this in the years ahead. | Photos: Sandy Smith 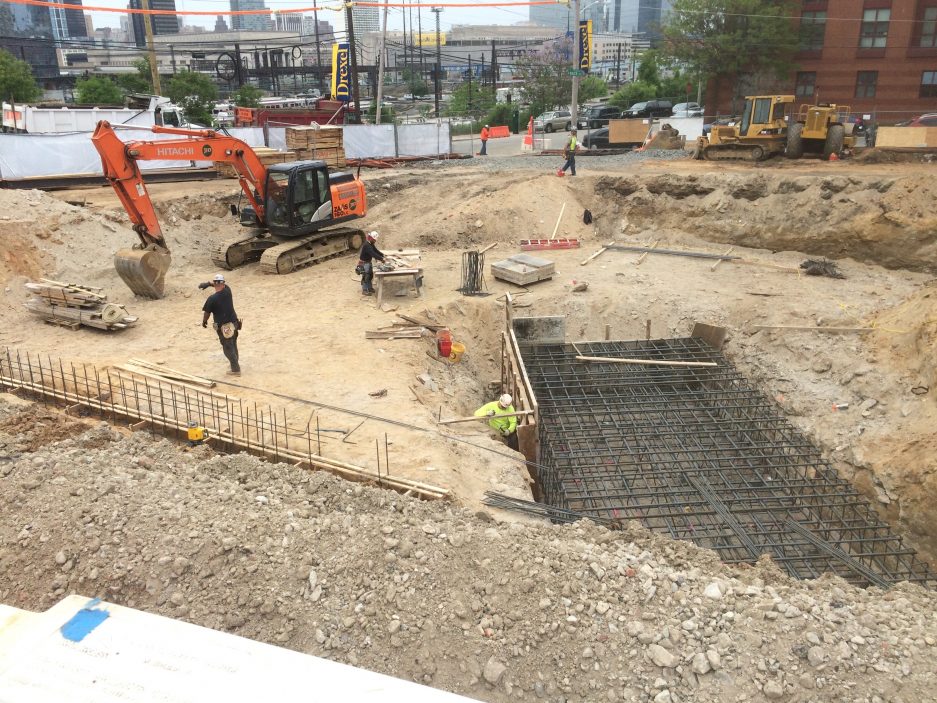 The reinforcing bars for the foundation of the building's service core 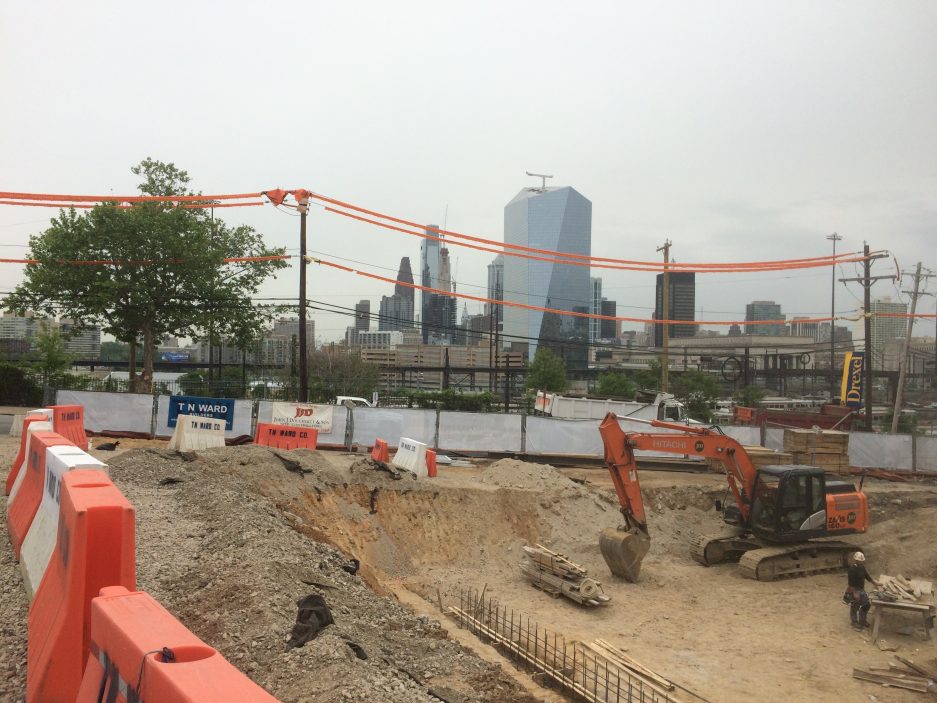 View of Cira Center and Center City from site 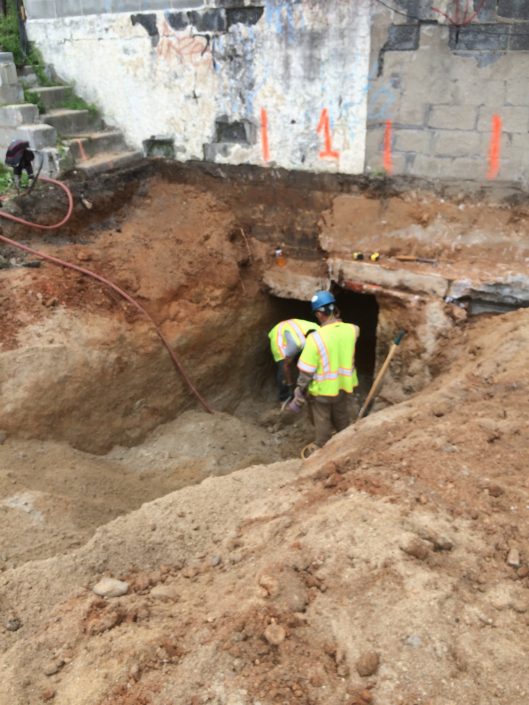 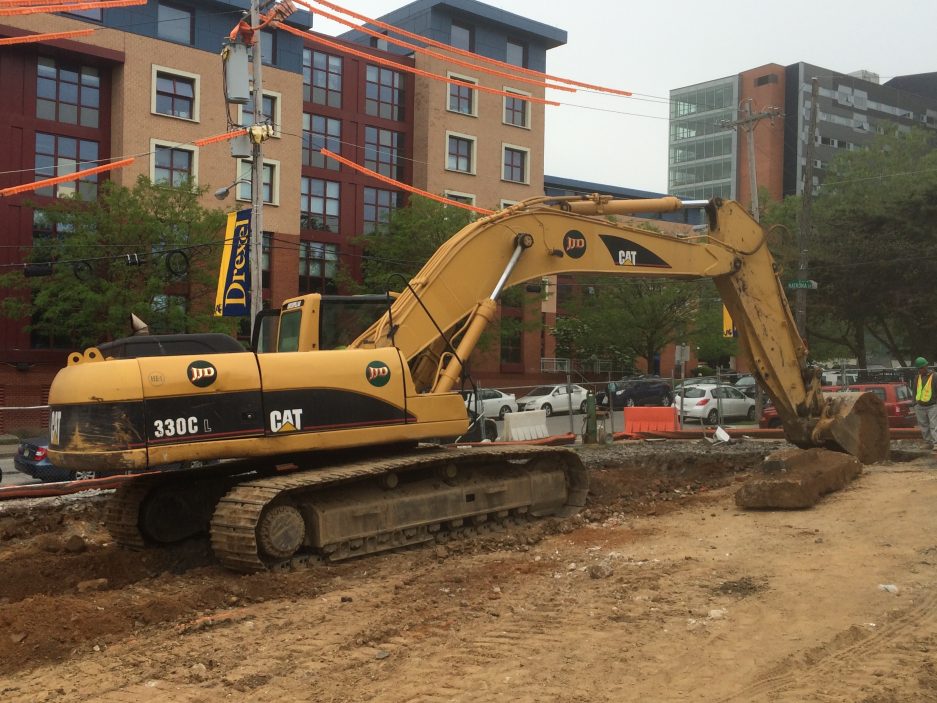 A backhoe scoops dirt from an excavation pit... 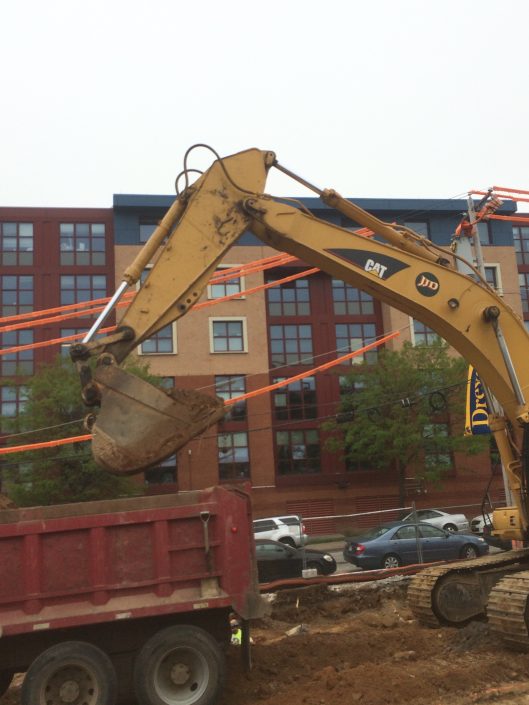 ...and deposits it in a dump truck. 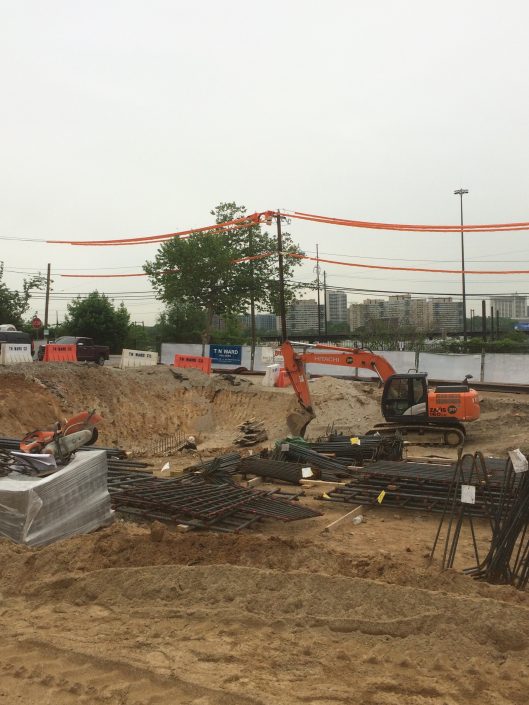 View of construction site from the west 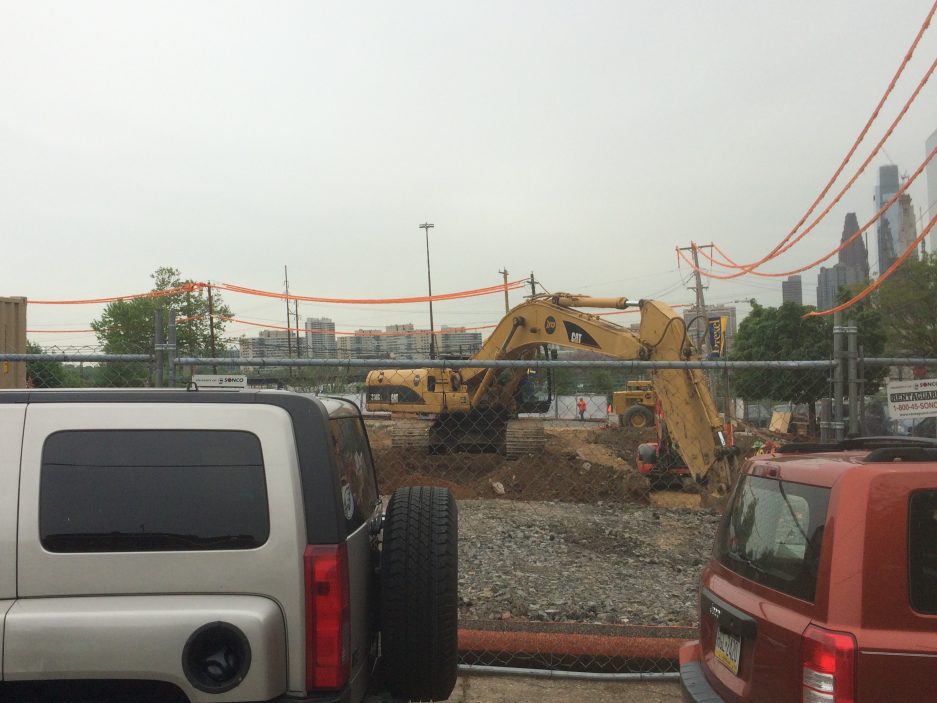 The construction site from its southwest corner. A rain garden will occupy this site when work is finished. 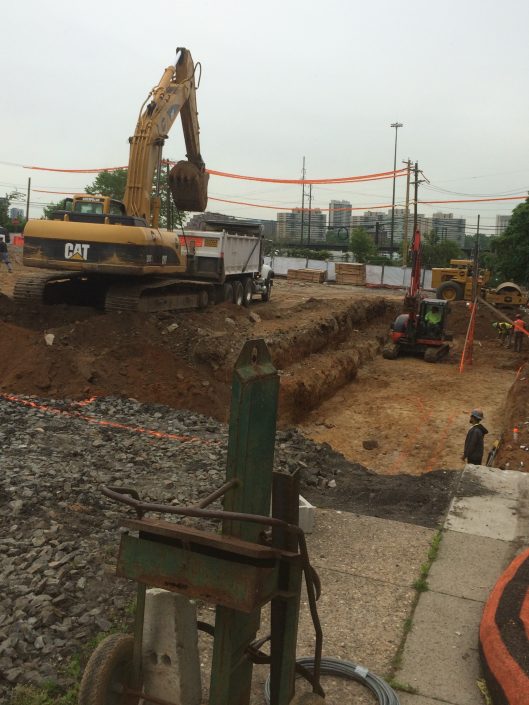 Excavation of the space to be filled by the garage. 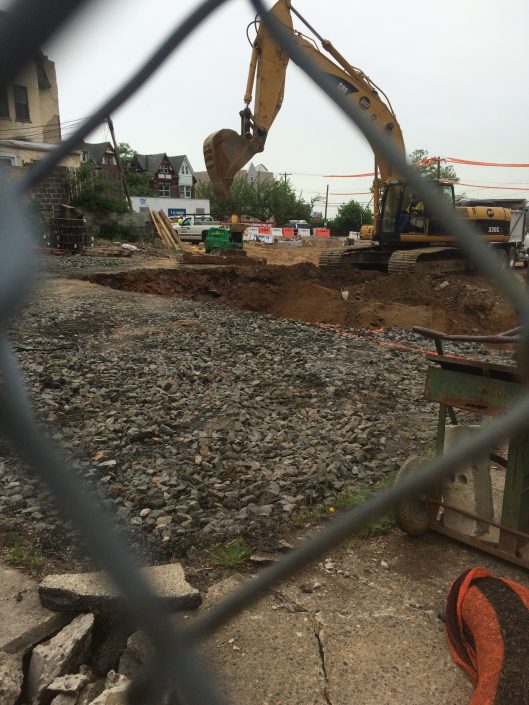 The excavation has exposed brick foundations of homes that once stood on the site. 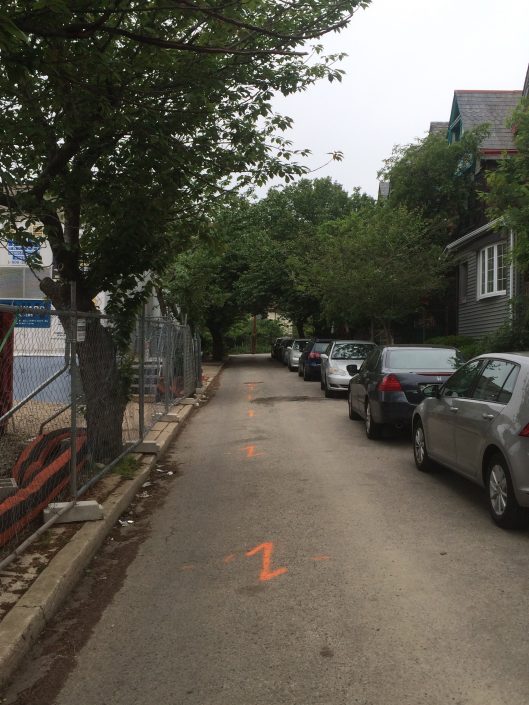 The 3200 block of Summer Street. The townhouses will be built where the construction trailer at left now sits. 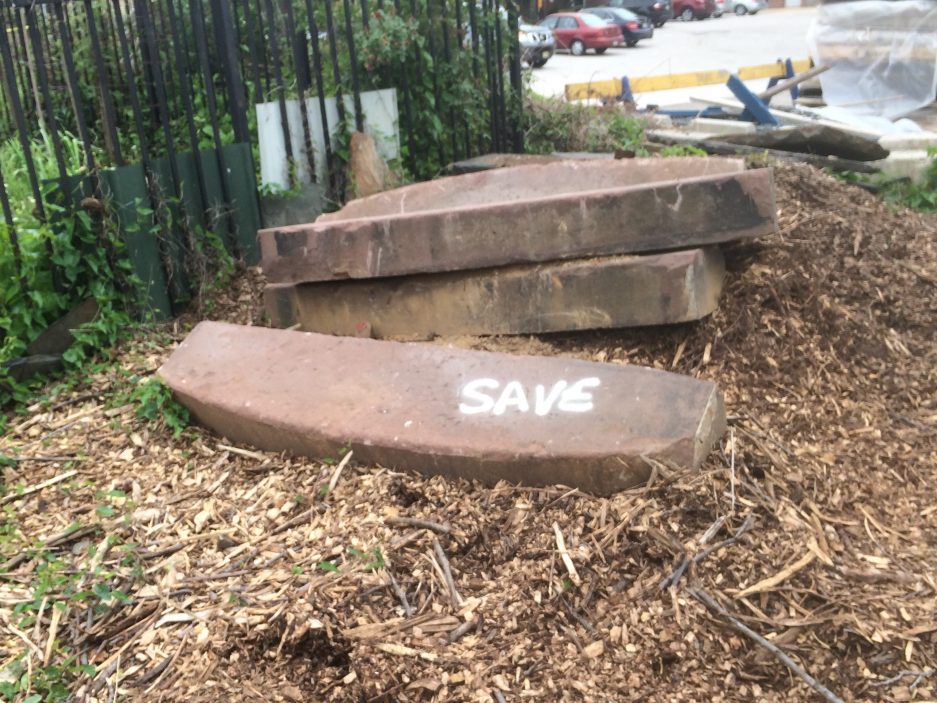 These steps from a razed home were salvaged and given to the Summer-Winter Community Garden for use as decoration. 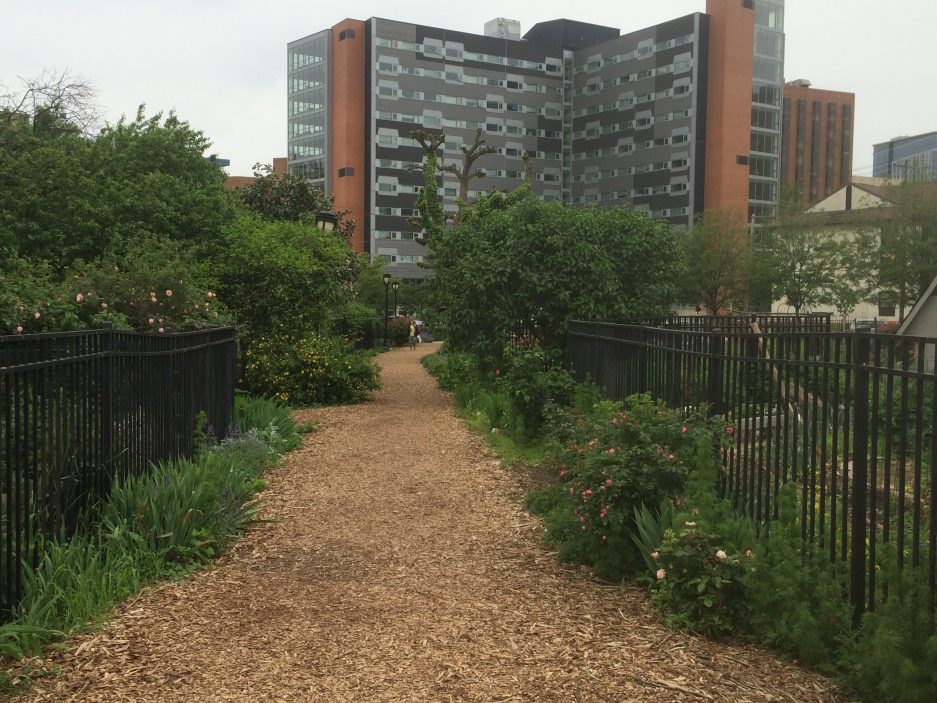 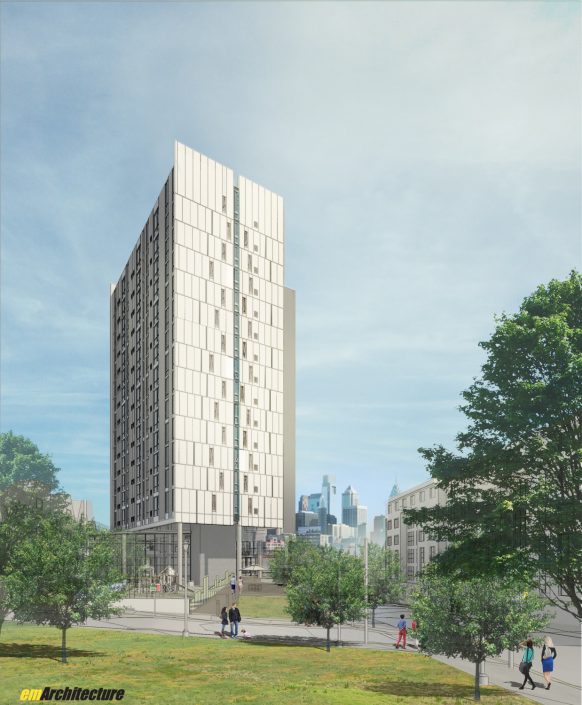 Rendering of Vue32, looking eastward from the garden site