The Divine Lorraine, Getting Ready For Its Closeup

Developer Eric Blumenfeld gave a group of potential investors, tenants and media folks a tour of his collection of vintage properties that together are restoring North Broad Street's faded glory. The lobby of the Divine Lorraine, outfitted with a “check-in counter” for today’s open house. | Photos: Sandy Smith

Around the turn of the last century, when the four buildings developer Eric Blumenfeld is in the process of reconstructing were built, North Broad Street was the address of choice for Philadelphia’s new money. The streetcar magnates and captains of industry who built mansions along this street staked it out after the city’s old-money Establishment around Rittenhouse Square shunned them.

The mansions have all vanished from the scene, but today, North Broad Street is witnessing another influx of new money, this time in the form of millions of dollars being invested in its redevelopment as a live/work/play environment. Four buildings, all owned by Blumenfeld, are serving as the linchpins of that transformation, building on his earlier success with conversion of a factory to loft apartments and a former car dealership into restaurants and a catering hall.

Blumenfeld, his chief financier William Procida of Procida Funding and Advisors, and commercial real estate agents Dominique Casimir and Jackie Balin of CBRE Fameco led a group of about 20 interested parties and two reporters on a tour of the four buildings this morning.

The tour began at the one building that has been completed, Mural Lofts at Broad and Spring Garden streets. The former Thaddeus Stevens School of Practice was converted into more than 70 loft apartments, all but two of which have been leased. Blumenfeld said that most of the units were leased within four months of going on the market, “including November and December, which don’t count” because they are typically weak demand months.

At Mural Lofts, Blumenfeld patted himself and his team on the back for showing that Philadelphians were willing to venture into territory considered risky by many. “What they said we couldn’t do, we did,” he said, starting with the Lofts 640 conversion one block north. “640 proved people would move to North Broad,” then the opening of Marc Vetri’s Osteria, followed by the conversion of the former Wilkie Buick dealership to its south into two restaruants (Alla Spina and South, one of this year’s 50 Best Restaurants along with Osteria) and a catering hall, “showed that people would come to eat on North Broad.”

All of the projects currently under development, plus a new-from-the-ground-up building to be built next door to Mural Lofts, will extend Blumenfeld’s North Broad restaurant row while adding more offices, apartments and entertainment facilities to the mix.

Ground has yet to be broken for the commercial building at the northeast corner of Broad and Spring Garden, but Blumenfeld and his leasing agents are already in negotiations with several potential tenants that together would provide a mix of essential services and leisure destinations. In his promotion of the site, Blumenfeld alluded to a popular convenience store chain as one of the possible tenants for the space. The leasing agents would not confirm information about any negotiations, saying they were still confidential, but Balin did have this to say: “What I can say is that Wawa is a fantastic institution and that any landlord would love to have them as a tenant. And the Gobbler is my favorite sandwich.”

Blumenfeld’s next project to the north is another former automobile dealership at 667 North Broad. Originally built as a Studebaker showroom and garage, the building has been better known for most of the past few decades as the city’s main homeless intake shelter. About two years ago, the city closed the shelter and sold the building to Blumenfeld, who installed Stephen Starr’s catering operation as a street-floor tenant. Starr Events (now Starr Catering Group) will remain in the building while its reconstruction proceeds; its catering kitchen will stay on the Ridge Avenue side of the street floor while its offices will move up to the second floor of the Ridge Avenue side in order to open up the entire Broad Street side for restaurant or other commercial use. Blumenfeld said that the street-level space would have garage-door fronts in homage to the building’s origins and that the upstairs office space will include a large co-working facility. (Ever the promoter, Blumenfeld also strongly hinted that the space might be ideal for this publication’s offices.) Left to right: William Procida and Eric Blumenfeld explain the Divine Lorraine restoration project to the tour group outside the hotel.

From the Studebaker, it’s a short walk to the jewel in Blumenfeld’s crown: the Divine Lorraine Hotel, where a public open house was set to take place from 3:30 to 6:30 p.m. today. Procida had a mini-pep talk about that building: “The government loves it, the people love it, and we’ll have the whole building leased today.” (In addition to construction financing from Procida, Blumenfeld has received state and city assistance along with Federal historic preservation tax credits to advance these projects.)

Blumenfeld took the group inside to show the preparations made for today’s open house. Those preparations included inviting seven local graffiti artists in to decorate the walls of the lobby for the thousands of visitors he expects this afternoon.

While the conversion will not restore the hotel to its condition under Father Divine’s ownership — the top-floor dining room will become a deluxe penthouse apartment, for instance — it will restore the building and its public spaces to their onetime splendor, much of which was visible amid the construction activity. Two restaurants will be part of this building’s future as well. One, to the north of the main entrance, will be a cafe with a separate entrance from Broad Street. On the south side, Blumenfeld envisions a speakeasy-style restaurant and cocktail lounge that hearkens back to the actual speakeasy that occupied the hotel’s basement during Prohibition. Blumenfeld said that a secret entrance to the space tucked inside the stairs leading to Fairmount subway station will also be reopened. Again, Blumenfeld has approached a number of possible operators for the speakeasy but could not provide details except to note that both local businesses and national firms have been contacted.

In contrast to Mural Lofts, he said, people living at the Divine Lorraine will “have to like action,” for the building will be a livelier place. The neon sign atop the building, which has been dark for 18 years, will also be restored and relit.

The final restoration project Blumenfeld is undertaking involves the Metropolitan Opera House at Broad and Brown streets, one block south of Girard Avenue. Blumenfeld plans to turn Oscar Hammerstein’s 1908 theater into the city’s premier concert and theatrical venues with the assistance of “one of the nation’s biggest concert promoters.” He referred to the opera house, which is being rebuilt with an eye on restoring as much of its historic trim and detailing as possible, as “the secret weapon not only for North Broad Street but for all of Philadelphia.

“When it opens, it will shoot this place to the moon,” he said, “because there’s no concert and theatrical venue of this size in the city.”

This project will also make room for some of the people already living in the vicinity. For starters, the Holy Ghost Headquarters Revival Center, which saved the building from demolition when it purchased it in 1997 and entered into a partnership to rebuild it with Blumenfeld in 2013, will return to the opera house from Benjamin Franklin High School, where it has worshipped since the partnership began.

Blumenfeld also said that the reopened Met would contain a Starbucks coffee shop staffed by former convicts returning to the workforce.

The Divine Lorraine is slated to be finished by the start of 2017, and the Studebaker makeover should also be completed next year. No date was given for completion of the Met rehabilitation. 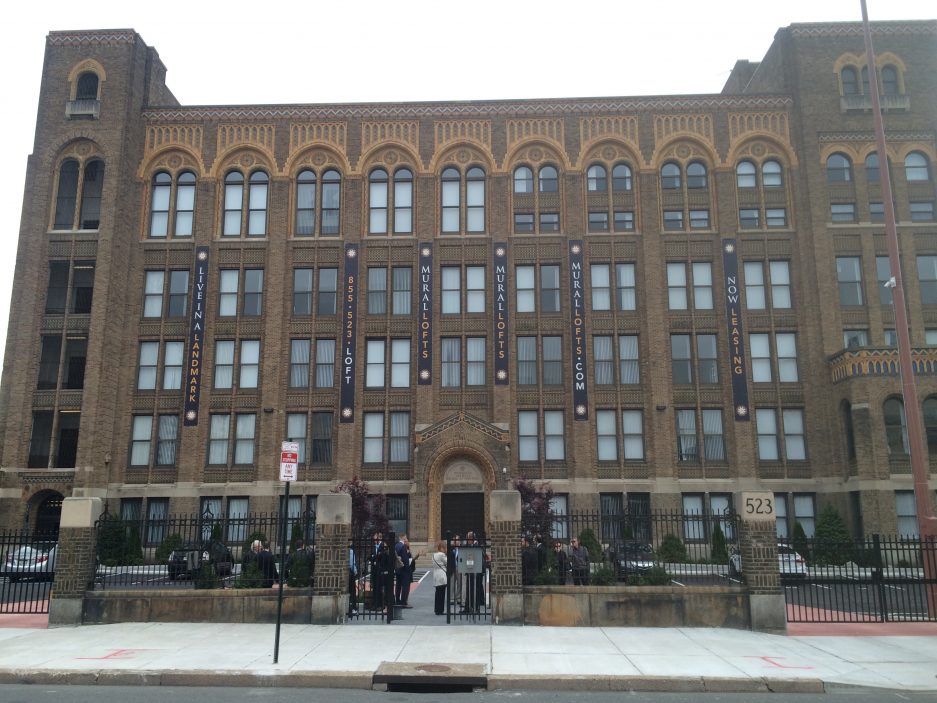 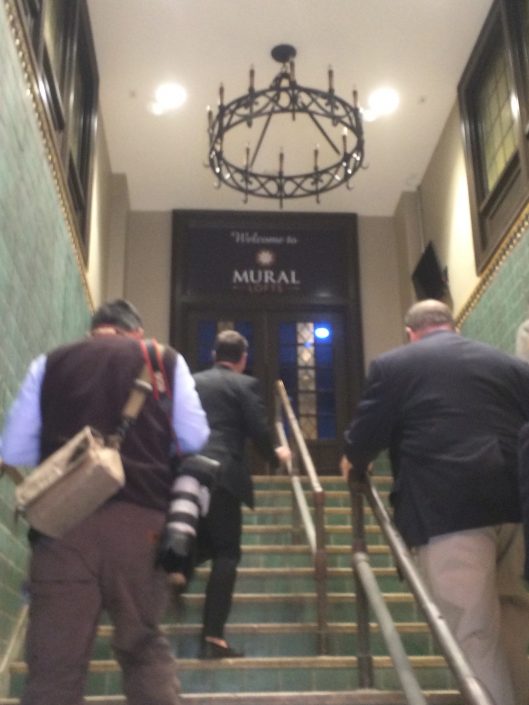 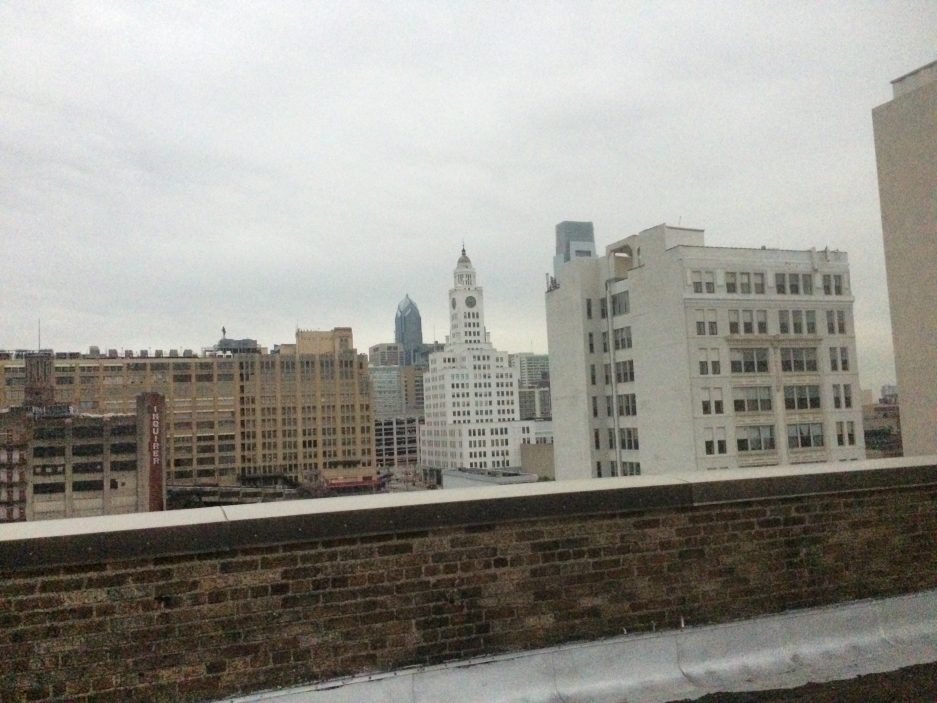 View to south from Mural Lofts roof. A community roof deck and two more apartments are slated to be added. 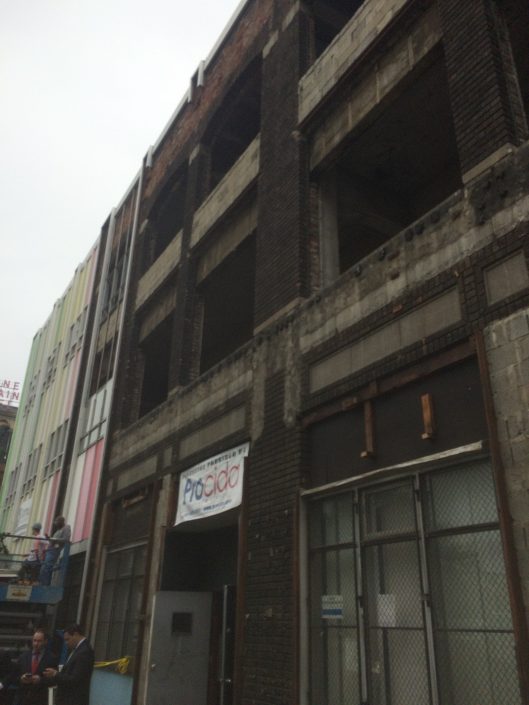 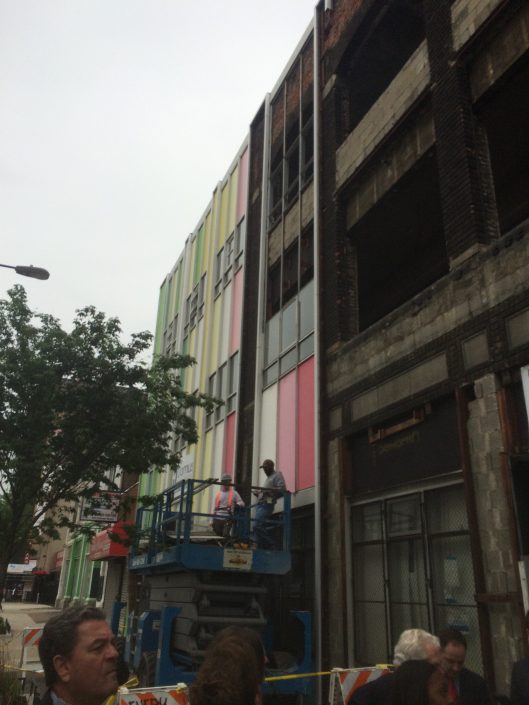 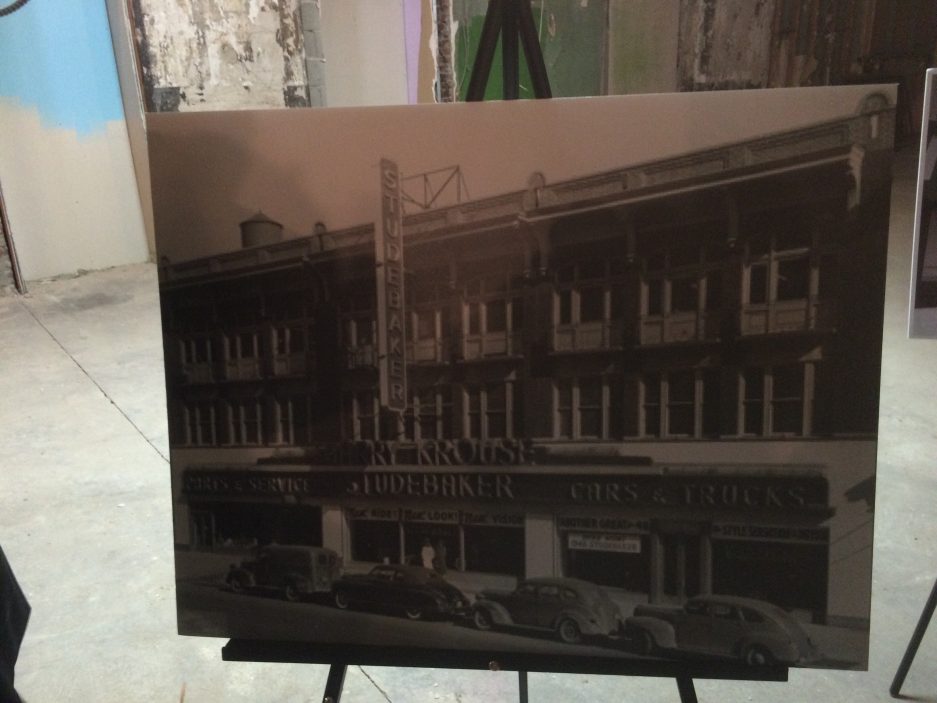 Photo of Studebaker Building as an automobile dealership 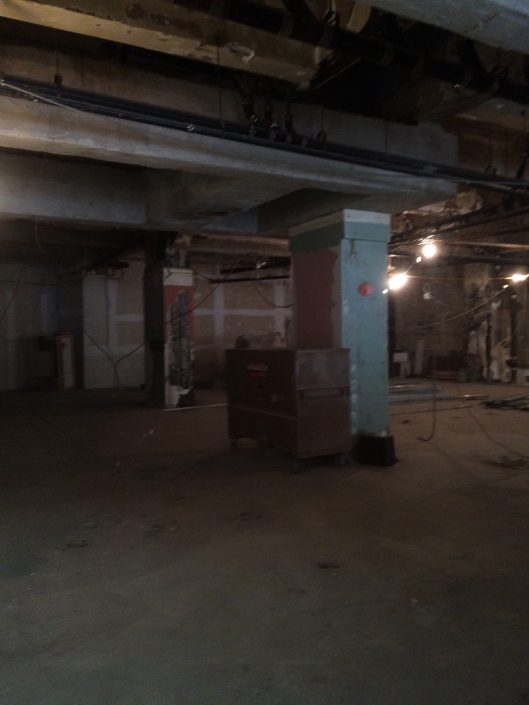 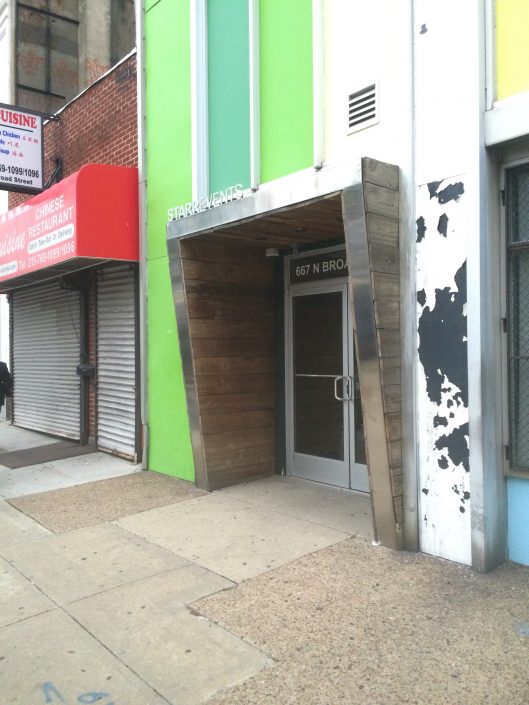 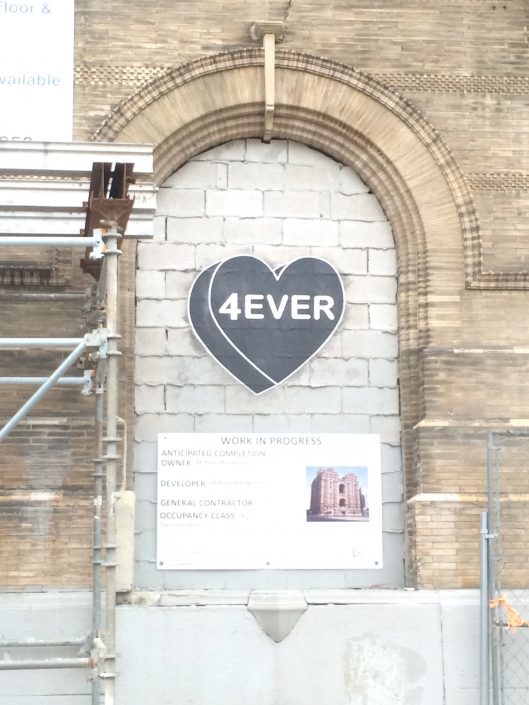 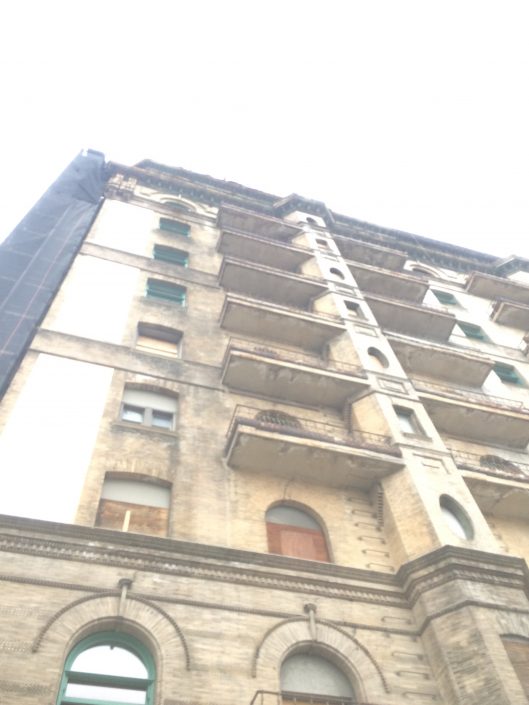 South side of Divine Lorraine 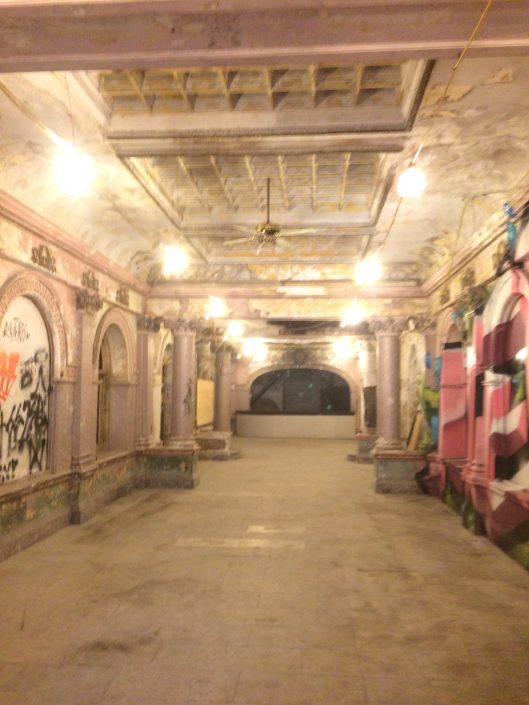 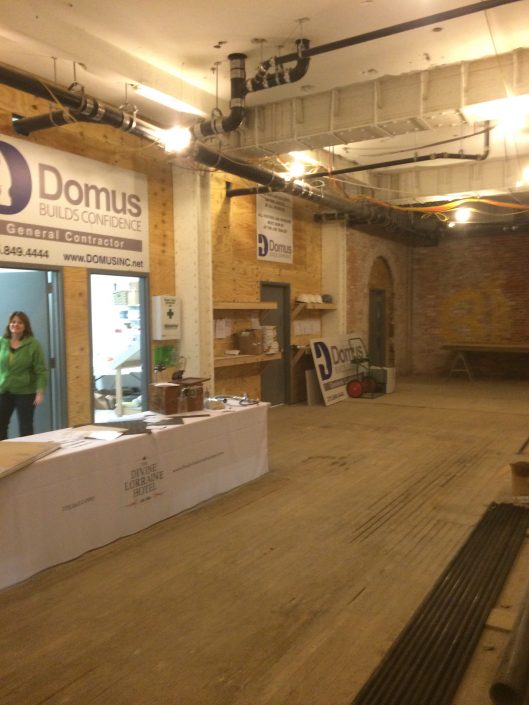 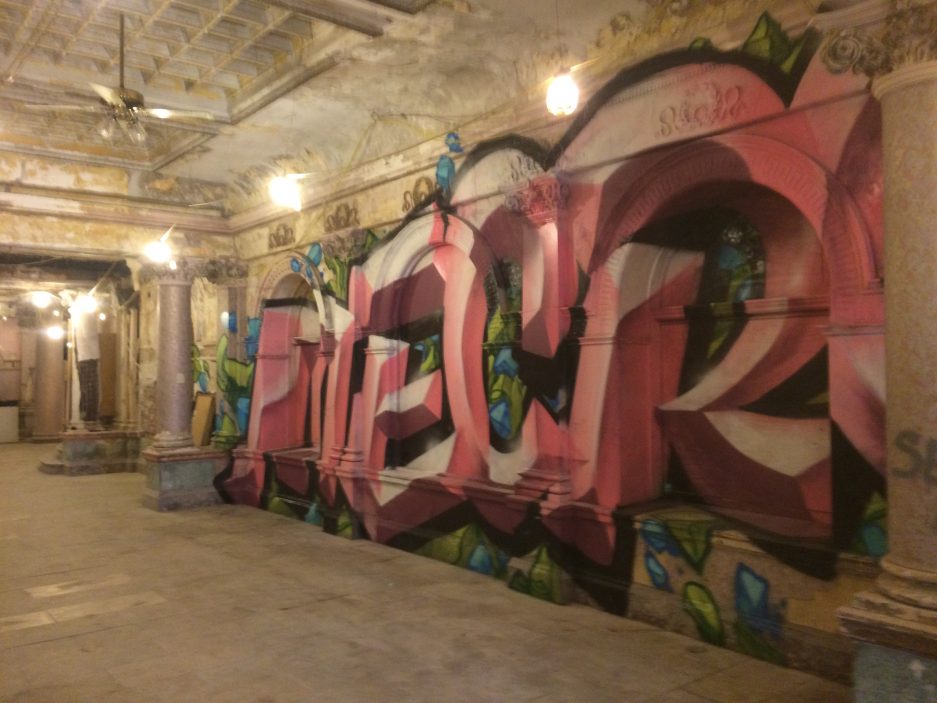 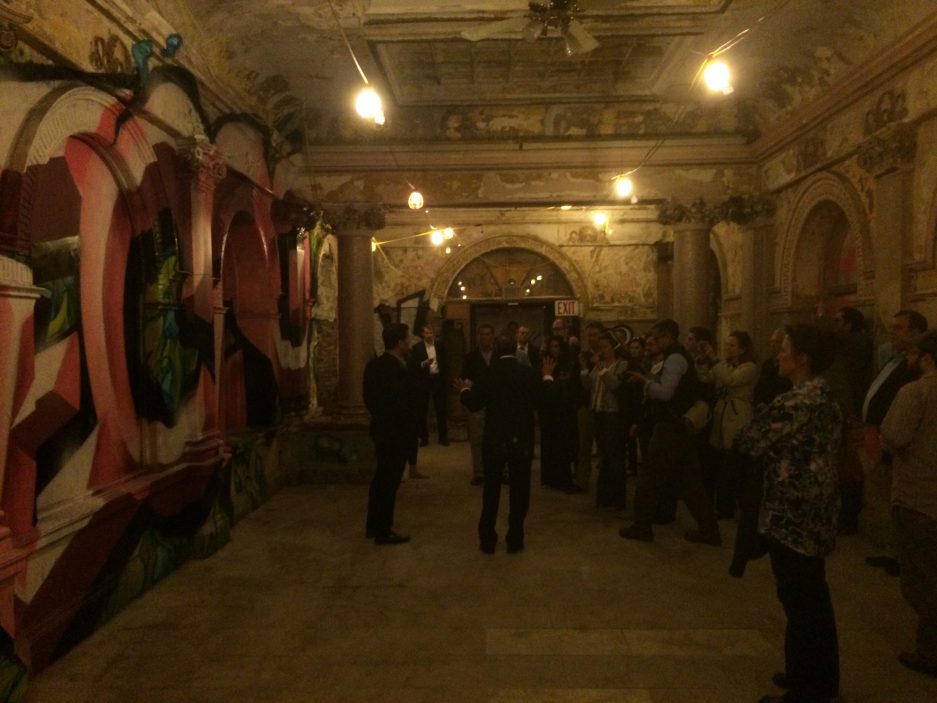 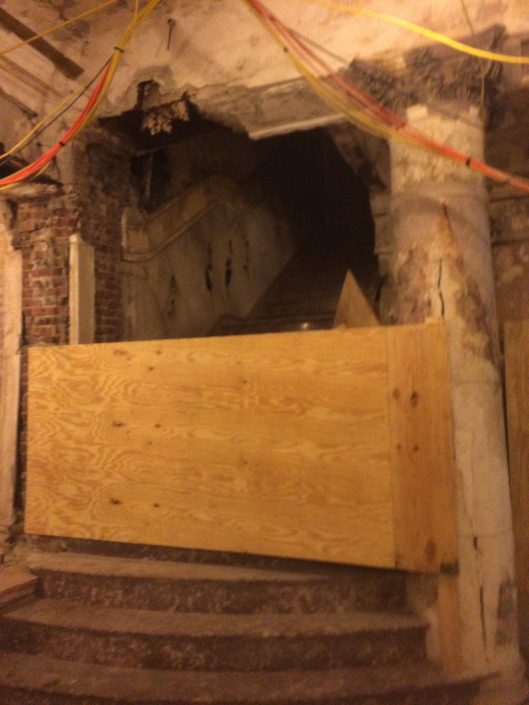 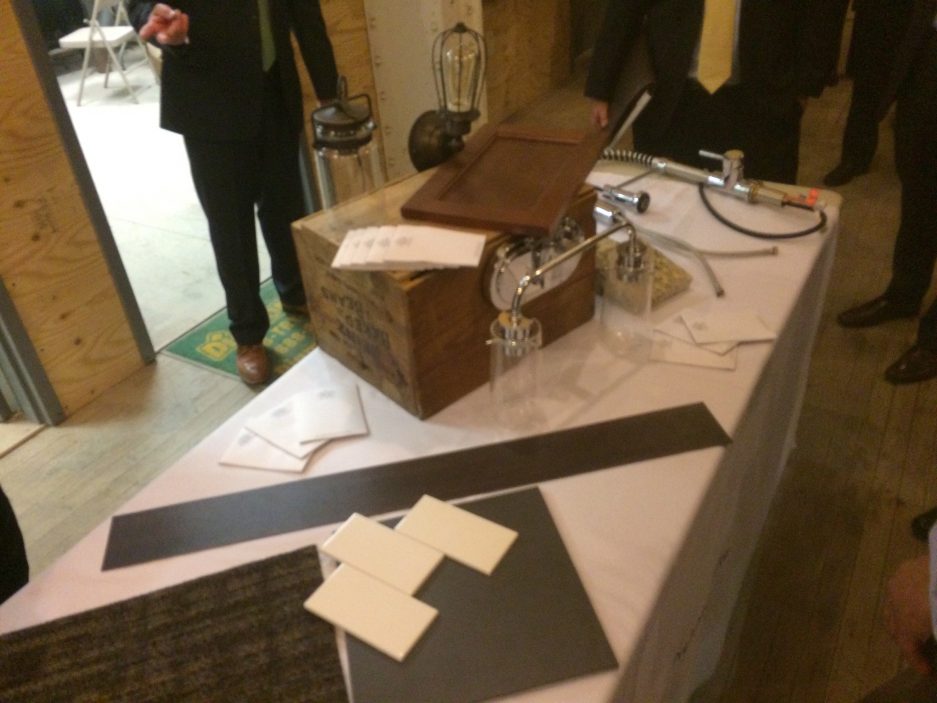 Samples of fixtures and finishes for Divine Lorraine apartments 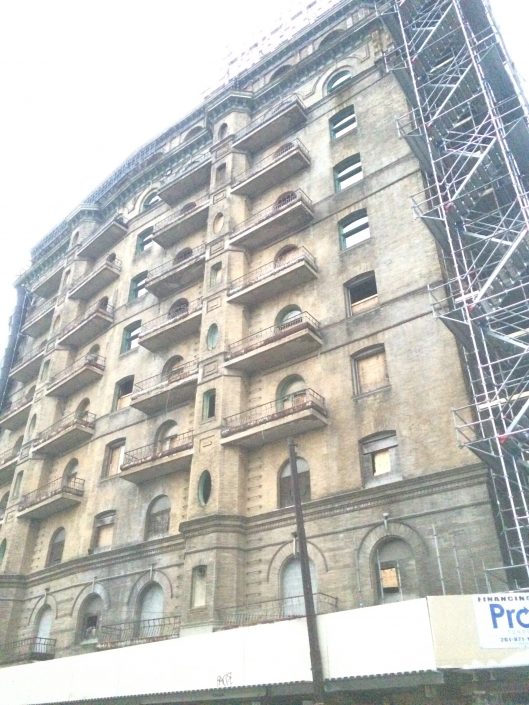 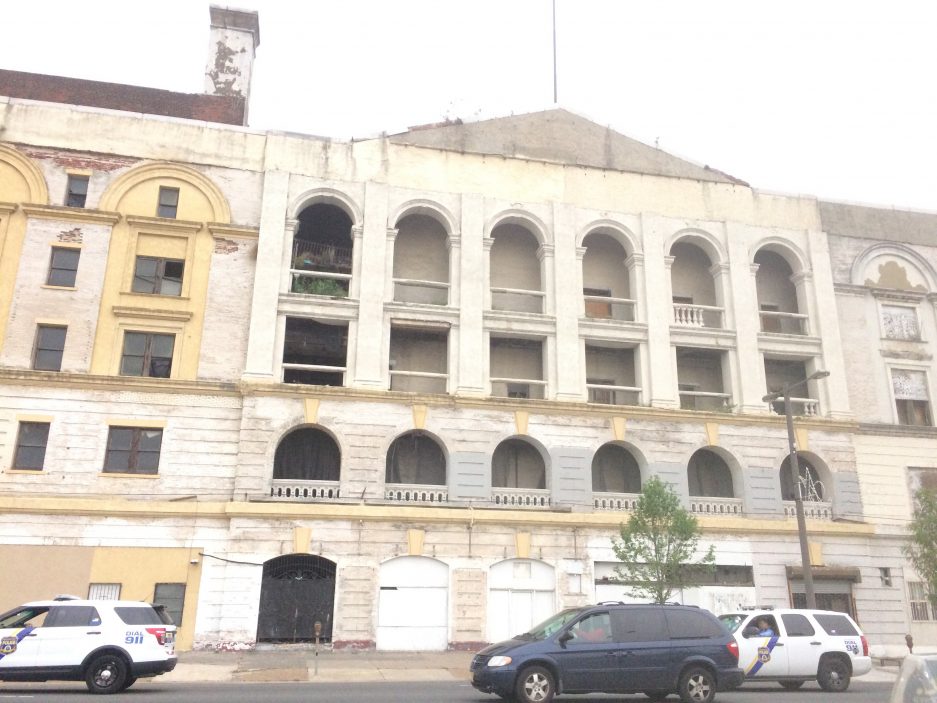 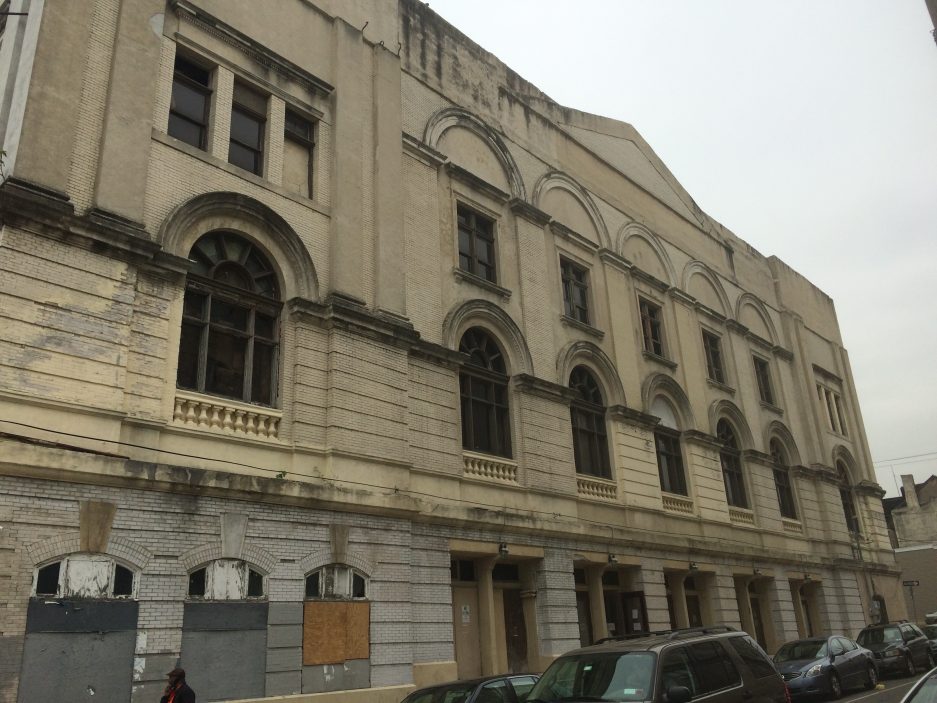 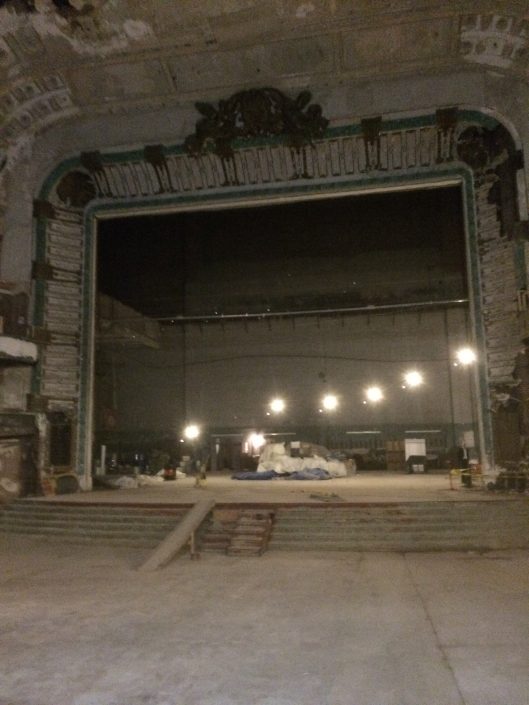 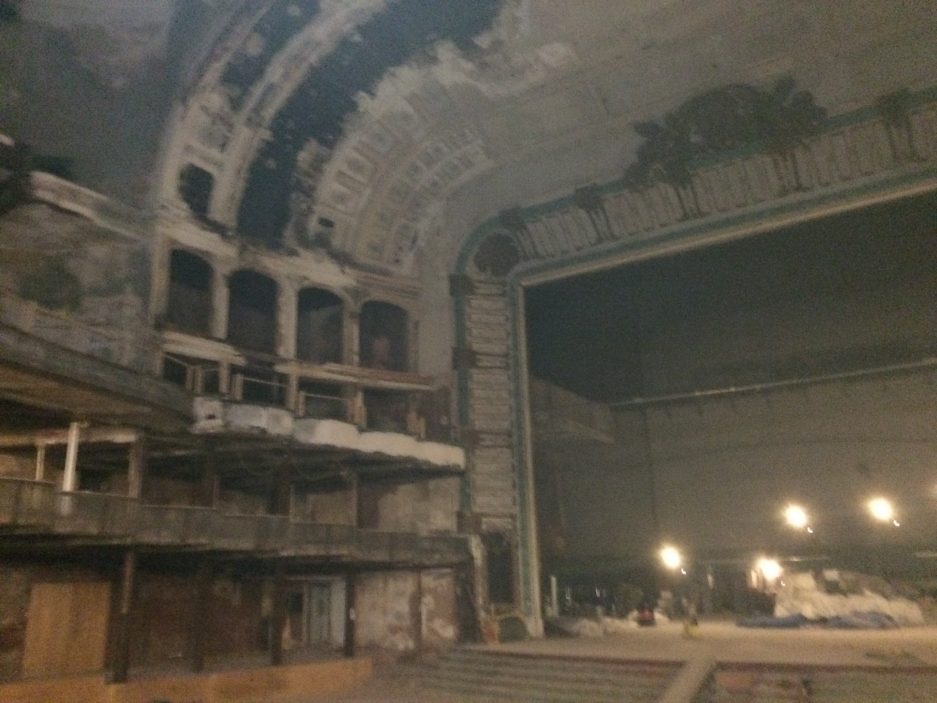 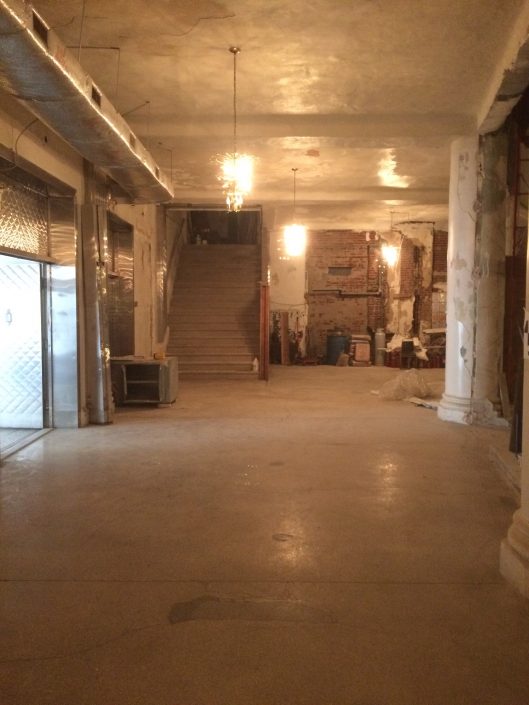 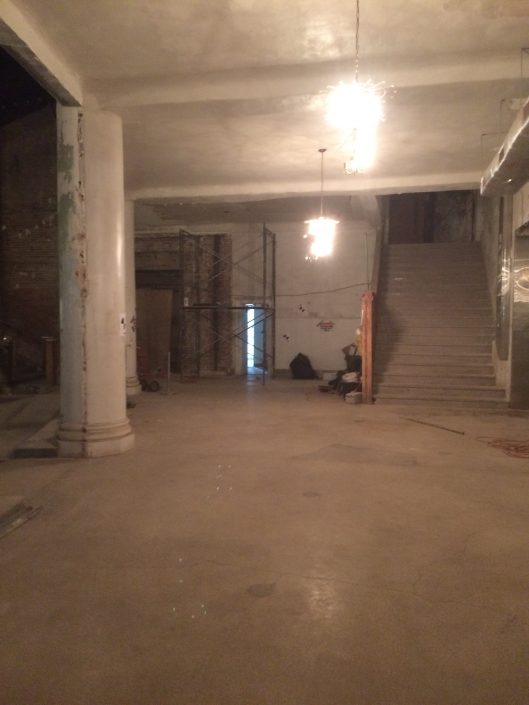 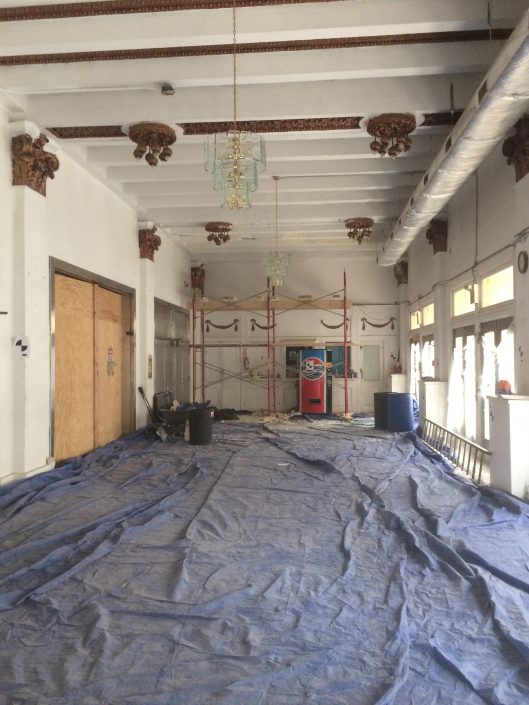