Temple's groundbreaking new library is already a hole in the ground, but a ceremonial groundbreaking reminded everyone how radically different this building will be. Temple University’s new main library as it will appear from a new campus green to be built across 13th Street from it. All renderings | Snøhetta

As the huge hole taking up almost an entire half city block in the center of the Temple University campus attested, ground had long since been broken for the construction of the university’s new main library. But even though this afternoon’s formal groundbreaking was strictly for the benefit of the assembled dignitaries, onlookers and media, it was nonetheless fraught with significance, for as all who spoke at the event noted, Temple’s new library is a groundbreaking project in just about every way.

Patrick O’Connor, chair of the university’s board of trustees, called it “one of the most important projects in Temple history” and a project that furthered the university’s commitment to “diversity with affordability and accessibility.” President Neal Theobald called it “a stunning library that will help the region thrive in the knowledge-based economy.” And Dean of the Temple University Libraries Joseph Lucia said, “It will break paths for academic libraries around the world.”

The new library, Lucia continued, will be “a varied ecosystem for a 21st-century learning environment.”

And it will have books in it. But they won’t be the library’s central feature.

What will distinguish Temple’s new library from those that have gone before it is space. Community-defining space. Collaborative space. Space that may not serve the same function in 20 years’ time that it performs when the library opens.

The functions of the new library will be “unique to this student body as well as future generations,” said Nathan McRae, the project manager for the library at Snøhetta.

“Libraries are in an evolutionary state constantly,” he explained. This one, he said, will be “notable for its focus beyond books as the core of the library.” To pull this off, “we had to reinvent the wheel” in terms of what libraries should look like and how they should function. Dean Lucia made a similar point when he pointed across the intersection of 13th Street and Polett Walk, where the groundbreaking took place, to Samuel Paley Library, Temple’s vintage-1965 current main library. “It’s a big rectangular box full of books,” he said, a physical expression of the historic role libraries have played as repositories and warehouses of knowledge in printed form.

While the new library will also store books, that function will be mostly hidden from sight. The new building, Theobald said, is “replacing the model of repository with that of information exchange.” Or, as Lucia said, “Library buildings are no longer designed around books. They’re designed around people.”

McRae said that his team, which is partnering with the Philadelphia office of Stantec to realize the project, spent three years hashing out just what that meant for now and the future with Lucia and his staff. For the first seven months of those three years, he added, “we did our visioning with no idea where the library would be located.” Temple had originally planned to put the building on Broad Street, then changed course and decided on a location at the center of the campus instead. “This actually worked to our advantage,” McRae said, “for we were able to see the building in a vacuum before we thought of the constraints the site would impose upon it.”

One of the principal functions visitors will notice is its purpose as both a community anchor and a campus connector. The building will have three entrances for pedestrians – a grand main entrance facing a future campus quad, a second entrance diagonally opposite Sullivan Hall, built in 1935 to serve as Temple’s first purpose-built main library, and a third, midblock entrance facing a break in a row of houses along Liacouras Walk that serves as a student shopping center. The three entrances will be connected by the central space on the main floor—”a civic presence upon entry that lets you know you are in a special place,” McRae said.

The next two floors above this civic space will also be devoted to people rather than books. The open book stacks for browsing will be on the fourth floor, “so you will experience a lot of the building before you get to the browsing area,” said Lucia. The excavation of the library’s below-ground space.

Most of the books in Temple’s main library will be stored in a high-density robotic storage facility in the building’s northwest corner, near the loading dock that will provide the only vehicular access to the building. In this respect, the new library goes back to the future: “It’s a return to the old model of books delivered from closed stacks, but in a different context,” Lucia said. “In the 21st century, you will have a more satisfactory overall browsing experience [with this system] because we will be able to show you more of what’s in the collection than a card catalogue could display” using the latest technology.

The shape and cladding of the building is also intended to serve as a bridge between the past, present and future. Much of the exterior will be faced with a dark stone that harmonizes with the gray stone of Temple’s 1930s-era buildings, and the shape is intended to keep the building from overwhelming its surroundings. “The building is large, but it projects itself as smaller as you move around it,” McRae said; its trapezoidal footprint and large cutout arches at the entrances make its bulk less obvious. 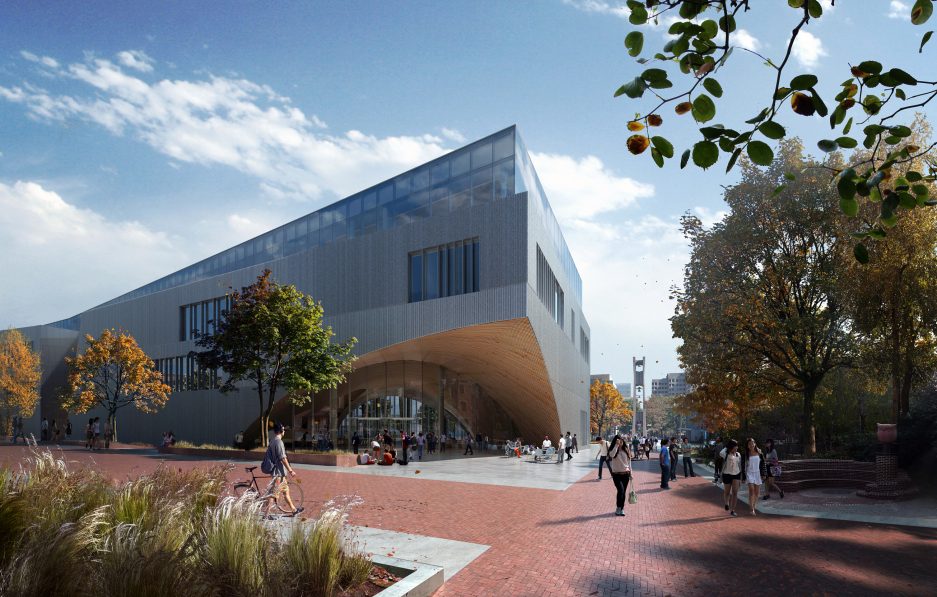 Entrance at Polett and Liacouras walks 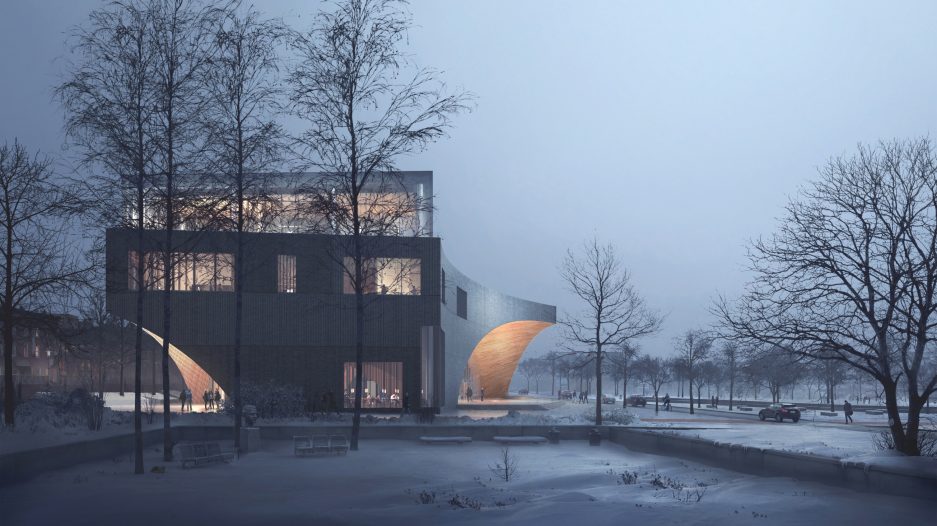 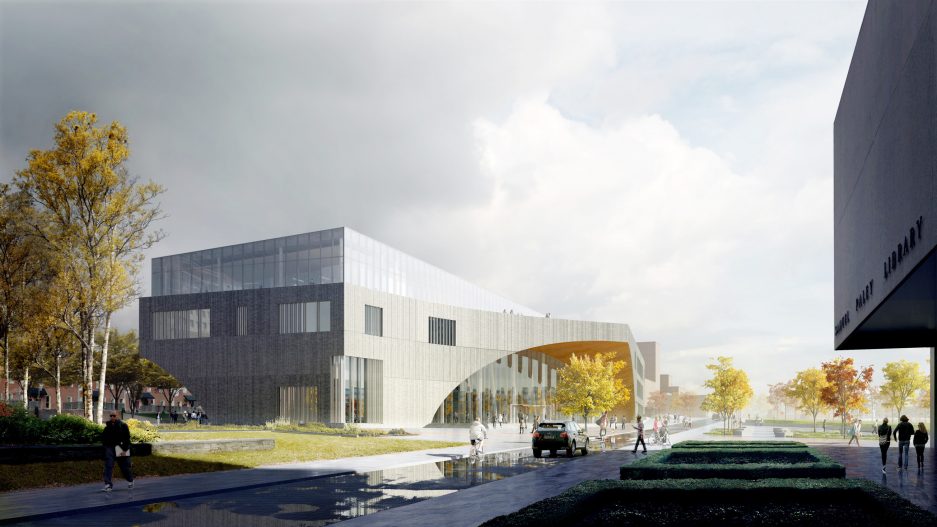 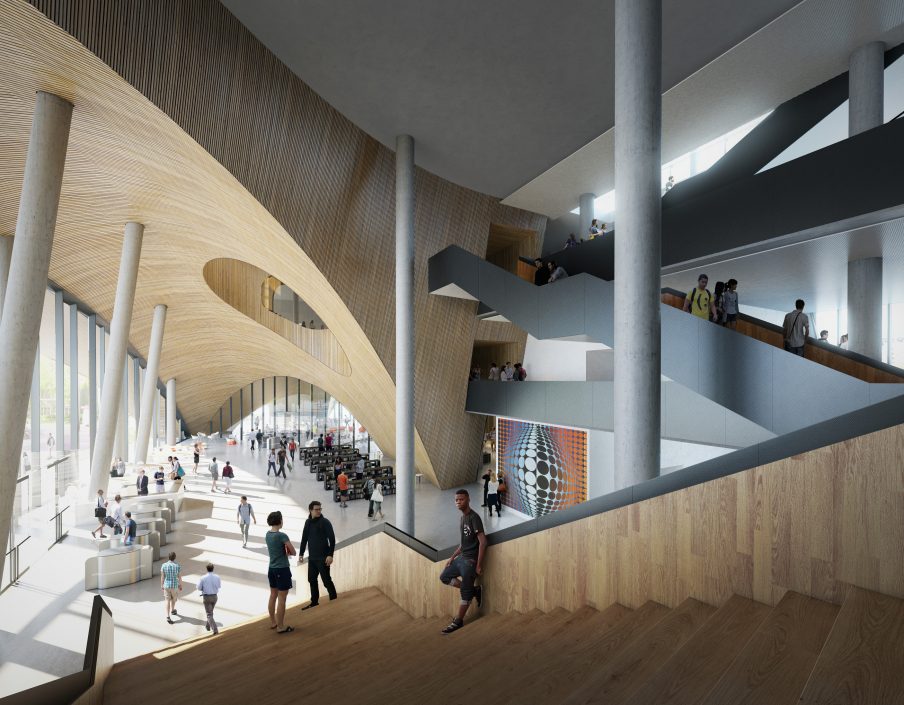 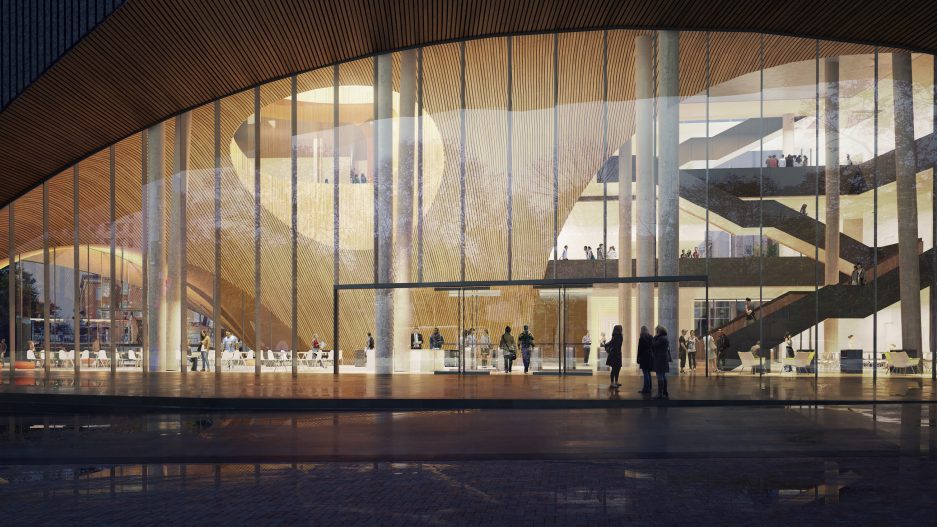 Main entrance from outside