Hale Yeah! Renderings Show Hale Building in All of Its Glory

New renderings show a spiffed up Hale Building, as Brickstone plans to revive the striking structure into an office building with ground floor retail. After years of sitting vacant, it looks like Brickstone’s restoration of the iconic Hale Building could move quickly. Knock on wood, of course.

The updated designs, which now call for a roof deck for use with the planned creative office space, were given the green light last week from the Historical Commission, according to Deidre DeAscanis, an associate principal with JKRP Architects. Only construction permits are needed for work to begin in earnest.

Earlier plans, which called for hotel at the site, had been approved, and DeAscanis said that they had been working closely with the Commission to ensure the new plans were within that same realm. As such, the intricate masonry, brick, and iron detailing will all be restored. Theose gorgeous copper bays on Juniper Street will be cleaned with the patina replaced in a more “controlled manner.”

A new addition–a grand two-story restaurant entrance that replaces the garish Valu-Plus facade–will seek to bring some life to the Chestnut Street side of the building.

Jonathan Broh, principal with JKRP Architects, said that the Chestnut Street entrance has always been a “litmus test” of the architectural style of the moment (see gallery for timeline). “Hale modified his own building within the first ten years,” added Broh. “That move kind of made it easy to remove the entrance piece and replace it with the styles of the time. We found a modification that Hale did to the original building from 1909, which gave us the massing for our addition.”

The tight confines of the building made for a tough residential or hotel project, as the hallways would have eaten up a lot of valuable space. The new use allows for the architects to take advantage of almost the entire floor plate. “Office is really the best utilization of that building,” said Broh. Each floor will have 7,400-square-feet of space (gross). Much like the Divine Lorraine (another masterpiece by architect Willis G. Hale), the Hale Building has sat vacant for decades, leaving many to wonder about shape of the interior. “The funny thing about it is that the building wasn’t as daunting as you might expect.” said Broh. “The exterior is exquisite, but the interior had been destroyed through renovations or simply withered away. It was almost a vanilla shell for us, like designing any other office plan. The floorplans are completely clean.”

Brickstone Companies purchased the building in September for $4.7 million, and plans include creative office space on floors three through eight and two retail spaces–the aforementioned multi-story restaurant on Chestnut Street and a cafe on Sansom– and a stylish roof deck shared by the office users. Office users will enter on Juniper Street.

The roof deck will be broken up into multiple spaces, including work areas and places to relax alongside a fire pit or under the shade of a pergola. “They’ve gotten excellent feedback on the roof. Tenants want to know if they can have exclusive rights,” said DeAscanis, who also mentioned the space is intended to be shared, not for one office user.

Though it’s not set in stone, Broh mentioned that Brickstone could look to employ a lighting package to the Juniper Street side of the Hale Building, much like they did at the Lit Bros. building at 7th and Market. Not only would it showcase Hale’s striking work, but it would light up what has traditionally been a dark alley, largely due to the all-but-abandoned Hale Building.

Once permits are secured, DeAscanis said that work could start in four to six week and be completed in nine months. 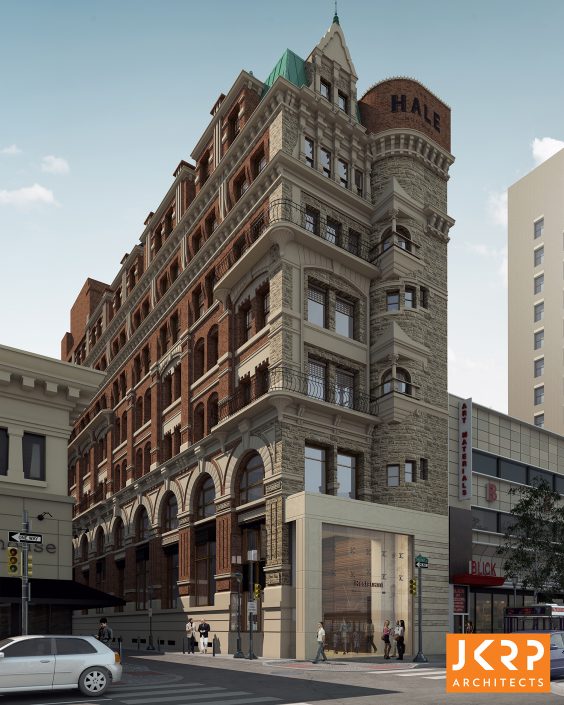 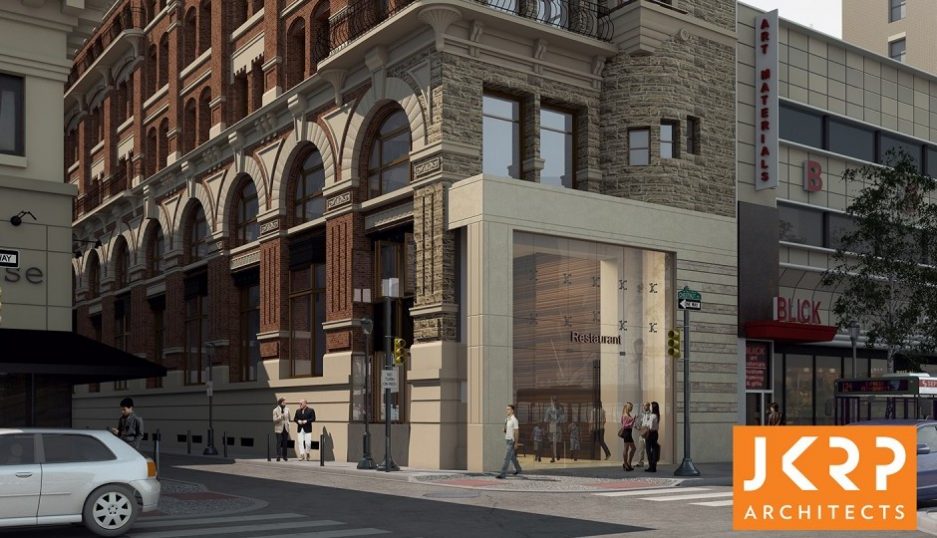 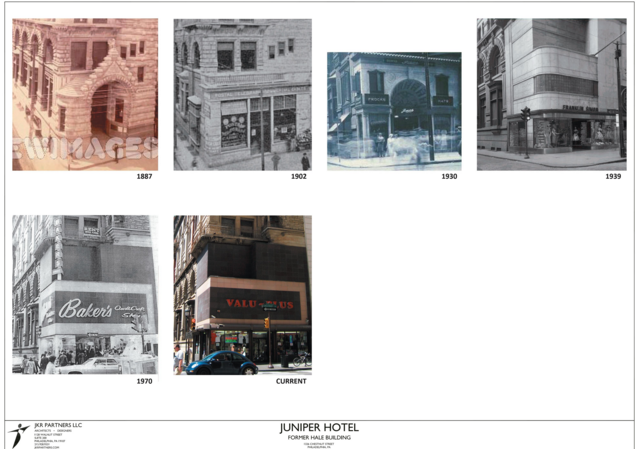 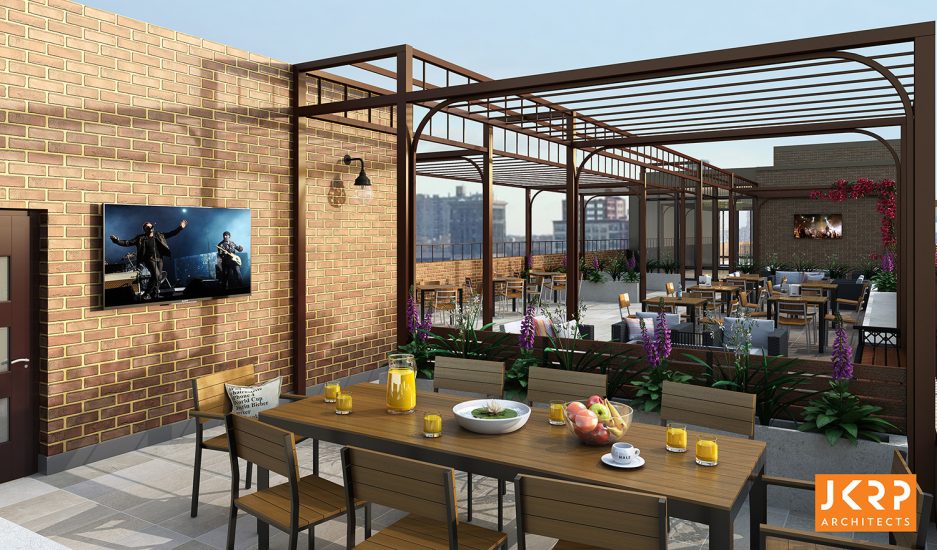 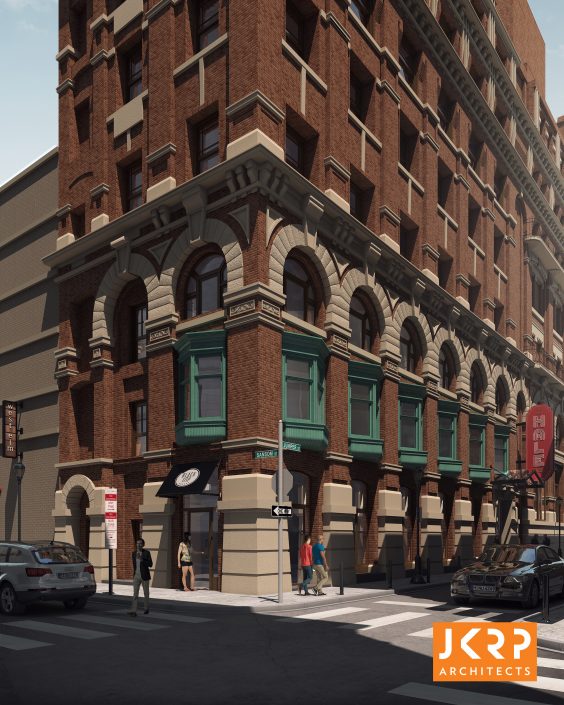 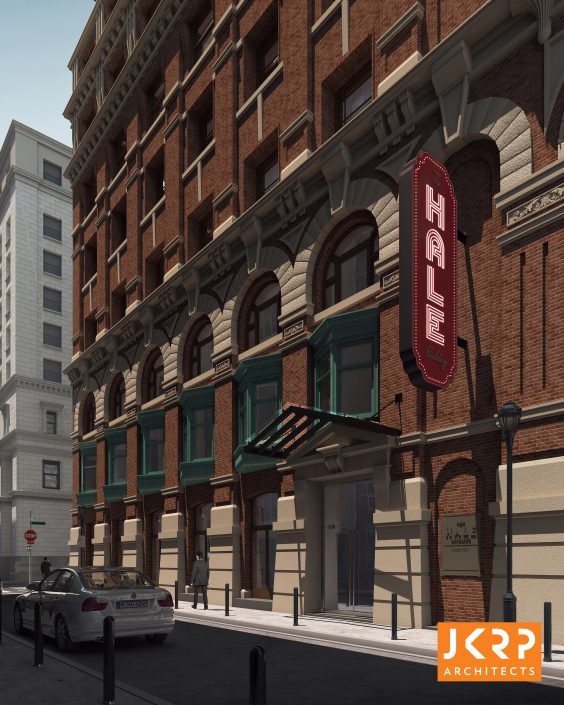