Wanted: An Oasis for Carpenter Green in Graduate Hospital

Carpenter Square's developers want their condo's commercial space to relate to and enliven the new community park. They're passing up offers to get the tenant they want, preferably a restaurant. Between the new Carpenter Green park and the building diagonally opposite from it, a new “town square” is taking shape at the intersection of 17th and Carpenter Streets on the southern edge of Graduate Hospital.

Carpenter Green is a new community meeting place to be maintained by the South of South Neighborhood Association at the northwest corner of 17th and Carpenter. Ground was broken for the park a few weeks ago, and grading of the park site is well along (see gallery).

Meanwhile, on the southeast corner, work is all but complete on the corner condominium building at Carpenter Square. Like the park, the housing development is also green, incorporating such features as green roofs and permeable pavers in the rear driveway; the project is LEED-registered.

The condo features a retail space on its first floor that the developers intend as a complement to the park. “We’re looking to have something that engages with the community and invites the community in” occupy the space, said Jackie Balin, the CBRE/Fameco Real Estate broker handling the sale of the retail condo. (Noah Ostroff, whose real estate blog I write, is marketing the residential condos, but is not involved in the marketing of the commercial space.)

That community-anchor component is important enough that the space remains unfilled despite several potential occupants expressing interest in it.

“There have been people who have expressed interest in the space, but the developers didn’t feel they would be right for the community,” Balin said.

The outdoor plaza that is framed by the L-shaped condo building is part and parcel of the 2,850-square-foot retail space, which includes 1,850 square feet on the street floor and a 1,000-square-foot basement.

Ideally, developers Adam Rosenzweig and Mark Scott would like to see a restaurant in the space, or at least a similar business that would attract regular patronage from the neighbors and activity on the corner.

“We’d like for the intersection to have a Fitler Square feeling,” Balin said, adding, “There’s a dearth of restaurants in this area. You have to go to either South Street or the Sidecar” on 22nd Street to find a good neighborhood hangout.

The developers passed on some attractive offers in order to fill the space with the right tenant. “At this point we have rejected one full-price offer”—they’re asking $525,000 for the space—“because it was not a food and beverage use, and as near neighbors we are particularly concerned with getting something that is going to make full use of our plaza and activate Carpenter Green once it is also complete,” Scott said.  “We continue to have interest, and now that the building is getting close to complete, that interest has been stepping up, but we want something to anchor what we feel is going to be one of the best intersections in the neighborhood.”

Balin said the retail space would be ideal for a young chef interested in striking out on his or her own after working in another establishment, or for an established restaurateur elsewhere who would like to be part of the growing Graduate Hospital-ity scene. 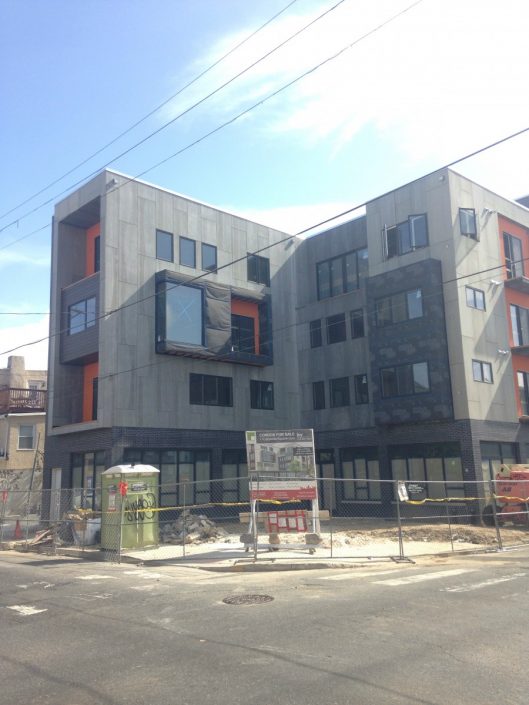 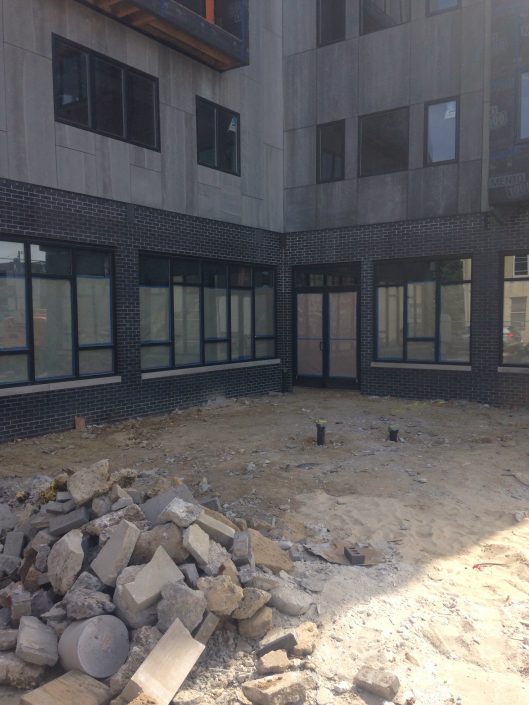 The courtyard attached to the retail space, which the developers want to be a restaurant. 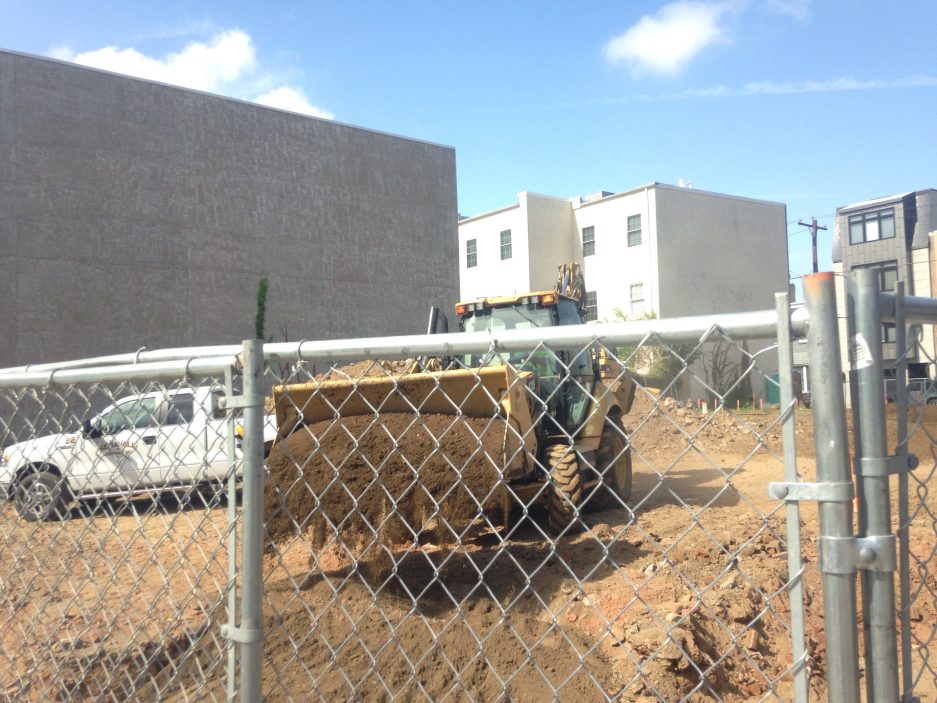 Earth-moving under way at Carpenter Green. 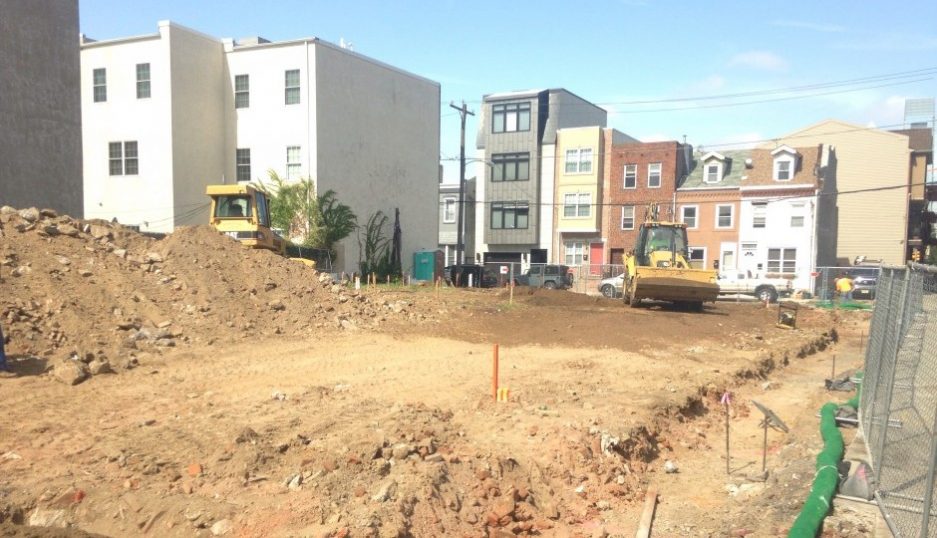 A broad view of the Carpenter Green park. 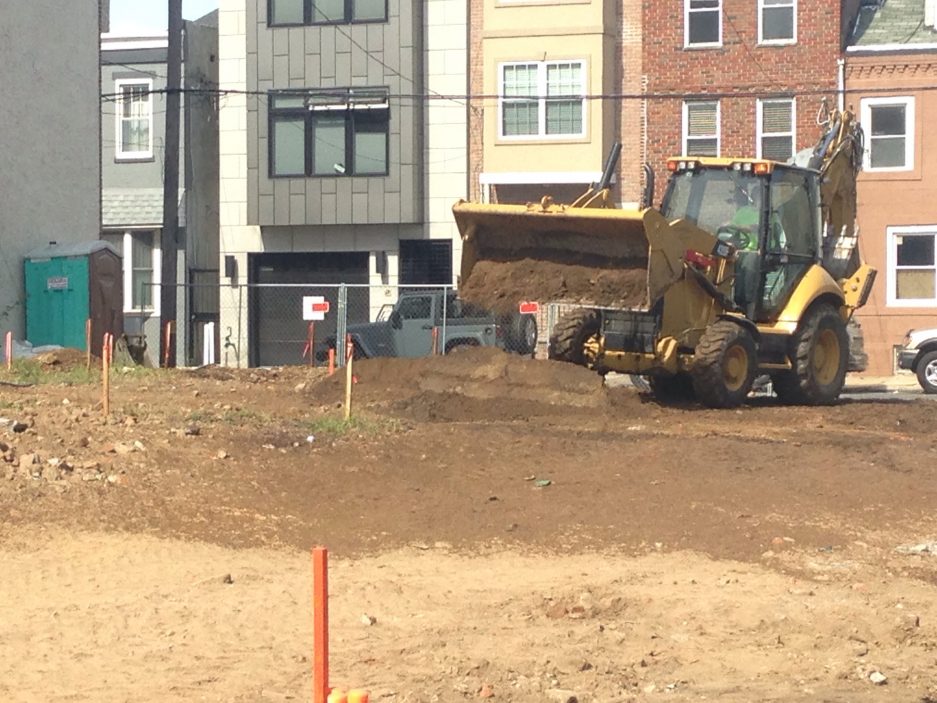 Grading under way at Carpenter Green.