Will the latest plans please the Architectural Committee tomorrow? As mentioned earlier this morning, PMC Property Group’s proposed 10-story building in Old City isn’t the only big project the city’s Architectural Committee will be reviewing tomorrow. There are several more to be sure, but the only other one with this much–perhaps more–power to tweak the fabric of a neighborhood is Dranoff Properties’ planned Royal Theater redevelopment, which would see everything but the building’s façade razed to make way for a mixed-use development with luxury housing and below-grade parking.

According to Hidden City’s Michael Bixler, the latest plan for the historic structure involves 40 luxury residential units, below-grade garage with 20 parking spaces, and 7,000 square feet of commercial space. Presenting before the Committee will be Dranoff Properties and Universal Community Homes, the latter of who Bixler reports will also go before the Committee of Financial Hardship on June 30th to try to “circumvent the legal protections of the local [historical] register.”

Earlier this year, South of South Neighborhood Association Chairwoman Laura Vidas spoke on behalf of the neighborhood group to say, “We think this is really going to be a crown jewel of South Street.” Indeed, Bixler writes the plan to restore the Royal’s façade “would be faithful” to architect Frank E. Hahn’s original design. It would also have the following:

New wood transoms, arches, windows, a restoration and refinishing of the historic railing, and new metal doors are all included in Universal and Dranoff’s preservation plan for the façade.

The new portion of the Royal would include a five-story luxury apartment building, residential entryway, and commercial space along the eastern side of the façade. Renderings below. 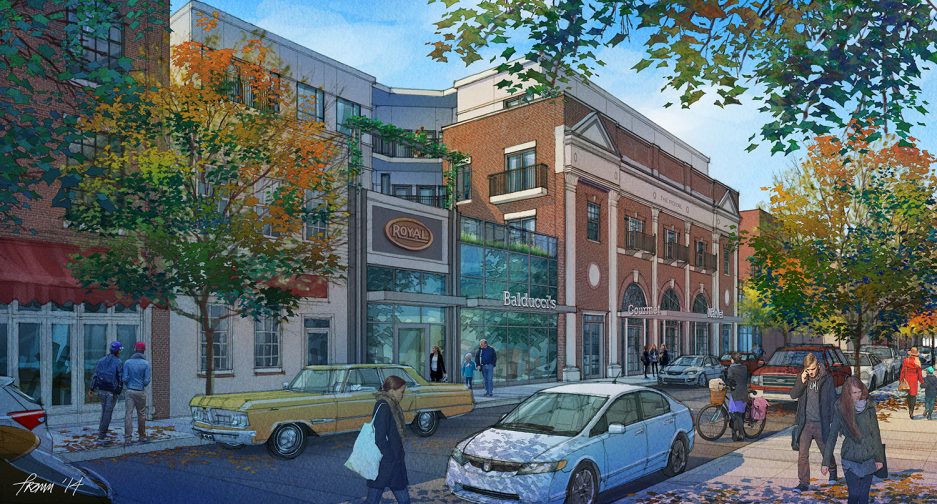