Inside the Avenir’s Think Suites, Fitness Center and Community Spaces

The transformation at the former Robinson Building is almost complete. We take a look at some of the community spaces. Here’s the fitness center at the Avenir. | Photos: James Jennings

The Avenir at 15th and Chestnut is still under construction, but that hasn’t stopped people from moving into the finished units. Leasing began in May, and Andrew Phillips, regional property manager with Scully Company, said that the “early adopters” have taken a lot of pride in being the first ones in the building. Construction is expected to wrap around June 15. Meanwhile, contractors were banging away at their tasks as residents passed through the space that will eventually become the lobby, complete with custom back-lit metal panels behind the desk of the 24-hour concierge, a seating area and a bank of elevators.

One elevator in particular has an interesting function. It opens on two sides, much like you’d see in a hospital, but it’s not for patients. It’s actually for easy bike access.  Bikers don’t have to lug their vehicle through the soon-to-be-pristine lobby, mucking everything up in the process. They can take their wheels directly from outside and down into the “cycle stations,” which provide secure storage, air pumps and tools for maintenance.

Though the building features a wide-range of sizes in terms of layouts (between 314-square-feet and 424-square-feet for micro-sized flats and up to 1,049-square-feet for 2-bedroom, 2-bathroom units), the 17th floor boasts an impressive amount of amenity space, including a screening room, demo kitchen area, a high-tech fitness room, lounge area and three reservable rooms called Think Suites. “We are expecting this to be a very social building,” said Phillips.

The Think Suites will be geared towards renters in entrepreneurial, business and even medical background. They will include a conference table, audio/video hookups, television screens and an online reservation system. The spacious lounge area combines a large demonstration kitchen, various seating options, multiple televisions and a ping pong area that connects to a quieter seating nook. Phillips said they expect to bring in local chefs to the kitchen to connect residents to the surrounding area and the city.

There is also a theater/screening room, which Phillips said will play host to community screenings of big sporting events and movies. Like the Think Suites, it’s able to be reserved by tenants, but also people from outside of the community as well. “It’s a neat way to bring people together,” Phillips said.

Then, there is the fully-loaded fitness room featuring a bright, wood-like flooring that’s cushioned for support. Carol Davies, director of sales and marketing at Scully Company, said this space will be “by far, the coolest fitness room in the city.” The high-tech workout machines allow for residents to plug-in with personalized accounts that hook up to on-demand television channels, Facebook, Youtube and music playlists. You can even use your own tablet or smart phone. The treadmills come with a “Go-Pro style” program that takes you on a virtual “run” in cities across the world with video from the actual street, such as the Hollywood Walk of Fame.

Across the gym is a flexible class space with movable equipment. It can morph into a spin studio, yoga or bootcamp-style space and has a large television screen to provide another virtual experience. According to Davies, they’re about to roll out a program called Scully Fit, which will provide residents with a personalized fitness lifestyle hub containing workouts, results tracking, class schedules and even recipes. “This is something that no other community has,” said Davies.

As for the aforementioned units, they’re surprisingly spacious and well appointed in terms of finishes. The micro-stlye flats range from 314-square-feet to 424-square-feet, but space saving design elements– barn style sliding doors and convertible desk bed (see Tweet below)–made the apartment feel comfortable. There are 180-units in the building–60 are flats, with the rest being studio, 1-bedroom and 2-bedroom layouts.

Phillips said these flats are becoming popular with busy medical professionals, whose lifestyle doesn’t afford them a lot of time at home. Jessica Scully, president of Scully Company, said they studied European-style living and styling and admitted it was a challenge to find quality furniture and appliances. “They don’t come standard in the States,” Scully said about the Blomberg refrigerator. Unlike the larger units in the buildings, the flats also come with a generous amount of built-in storage.

Here is the convertible desk bed, which is custom made by Multi Housing Depot by ARI:

We toured the Avenir today. Check out the custom desk bed in the micro "flats" from @ScullyApts. More next week. pic.twitter.com/5apkLRhC0V

Take a look at the gallery of community spaces, which were under construction during the tour.

Community Space at The Avenir 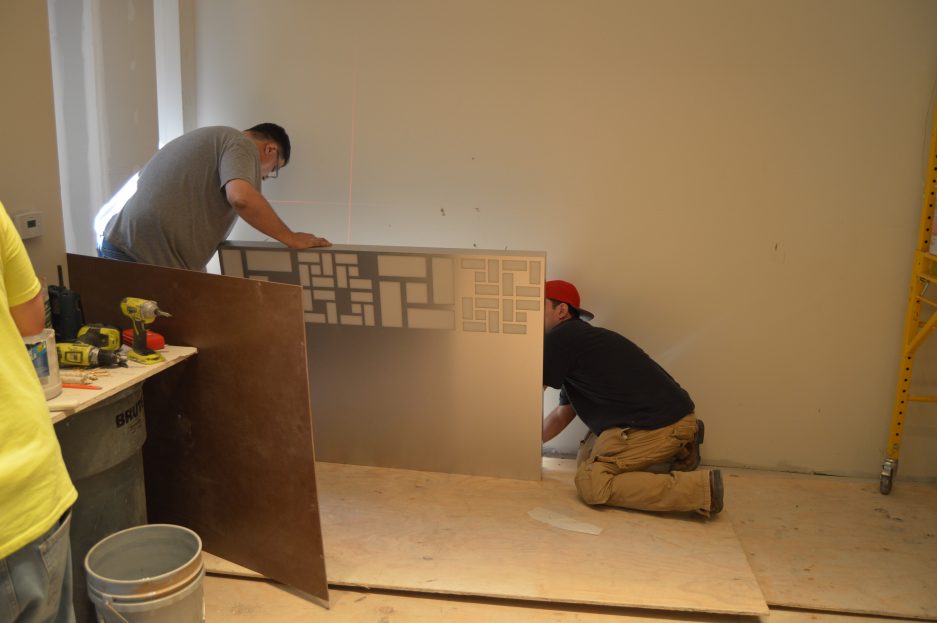 Workers install the metal panels in the lobby. 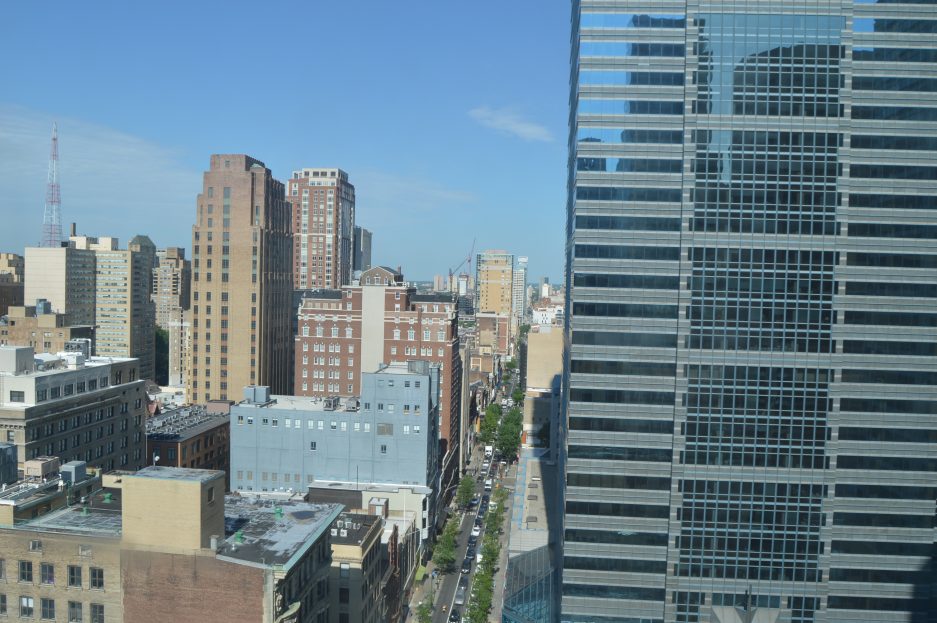 This is the view from one of the apartments on the 17th floor. 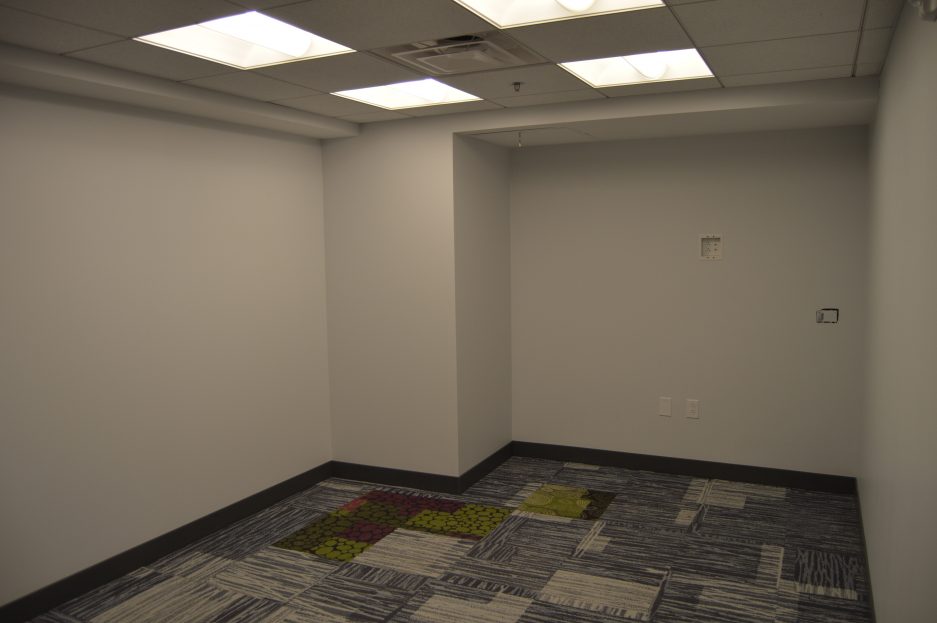 Inside one of the Think Suites. 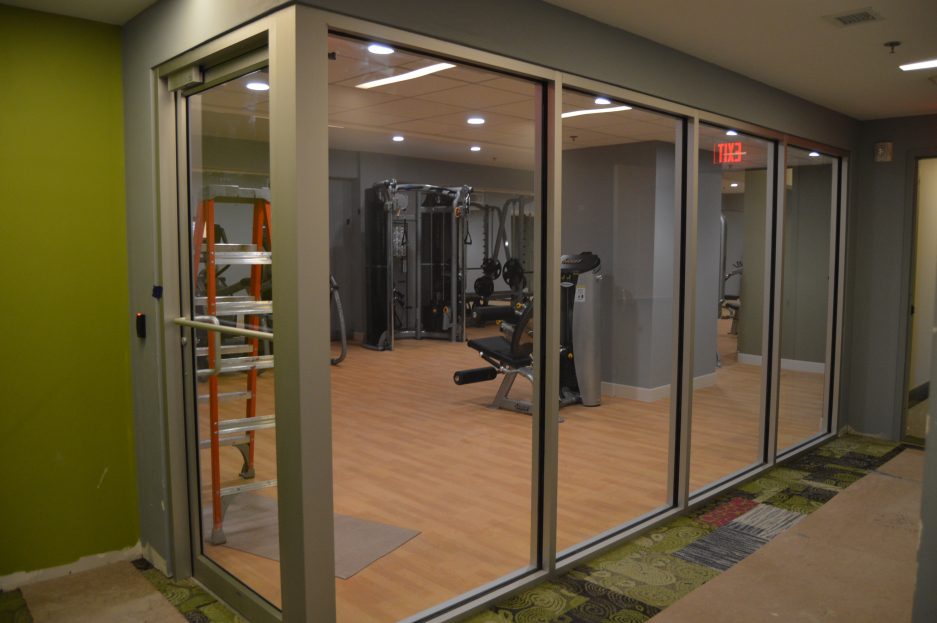 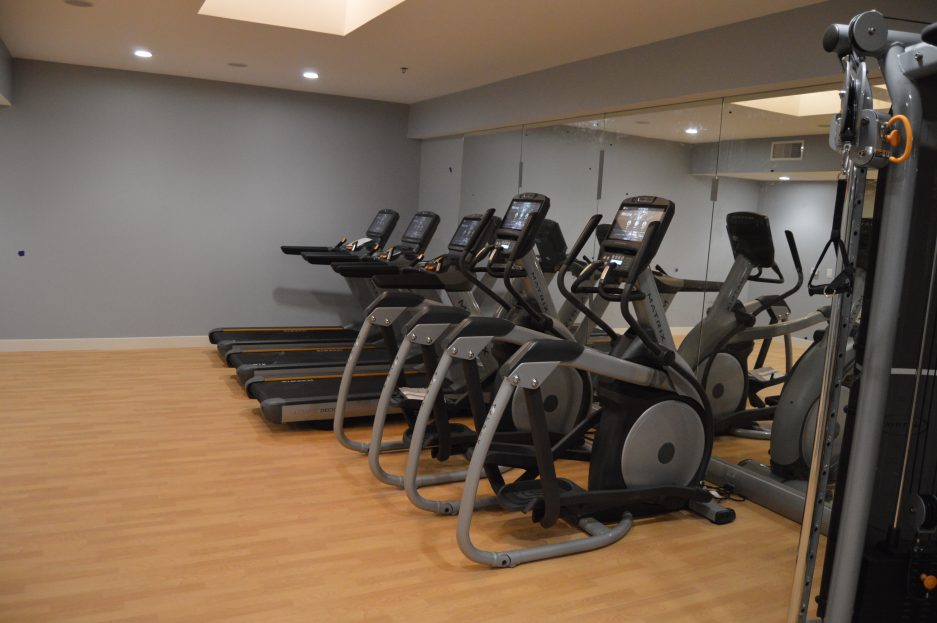 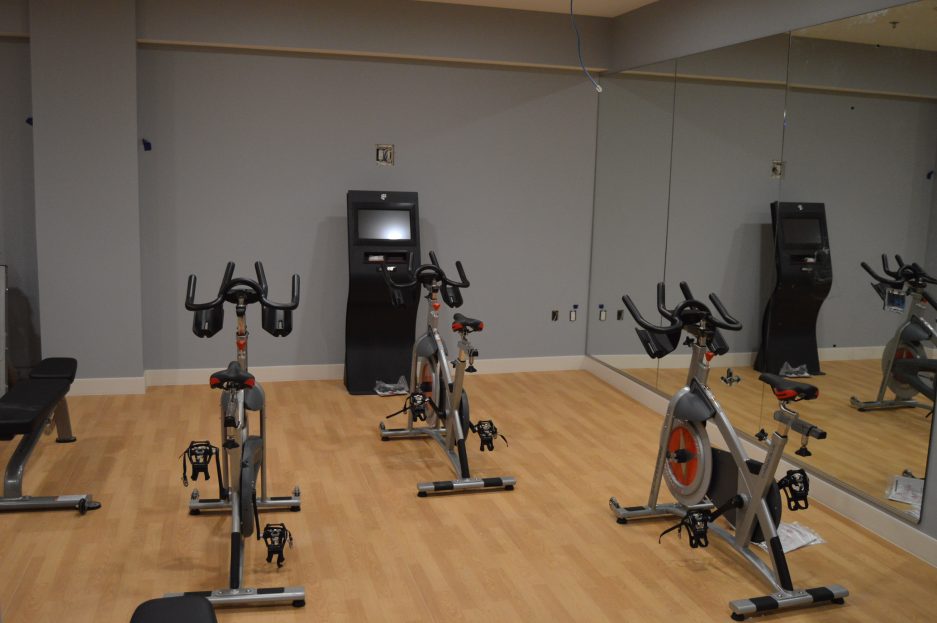 The flex space with cycles, a large TV will hang above the kiosk 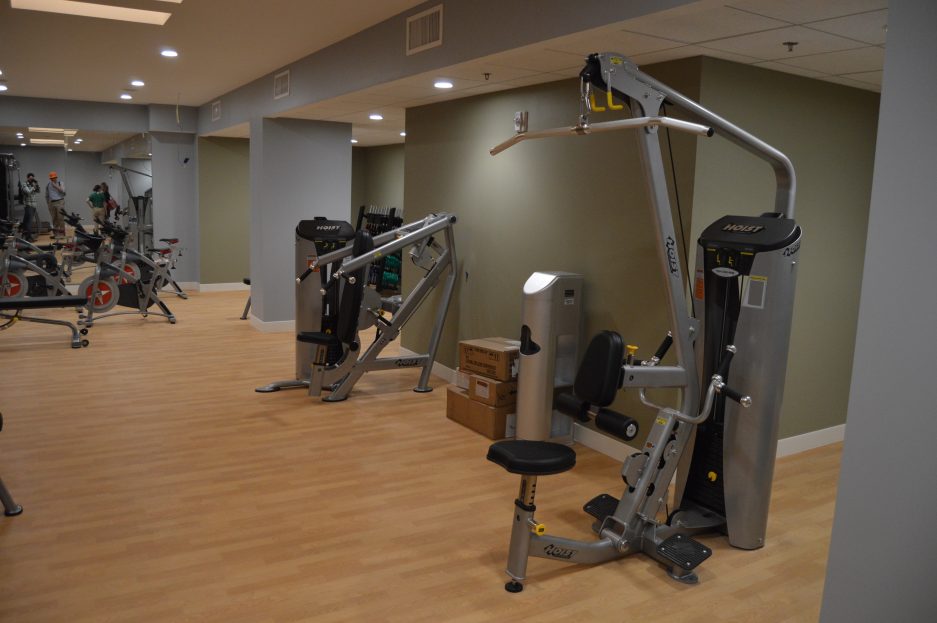 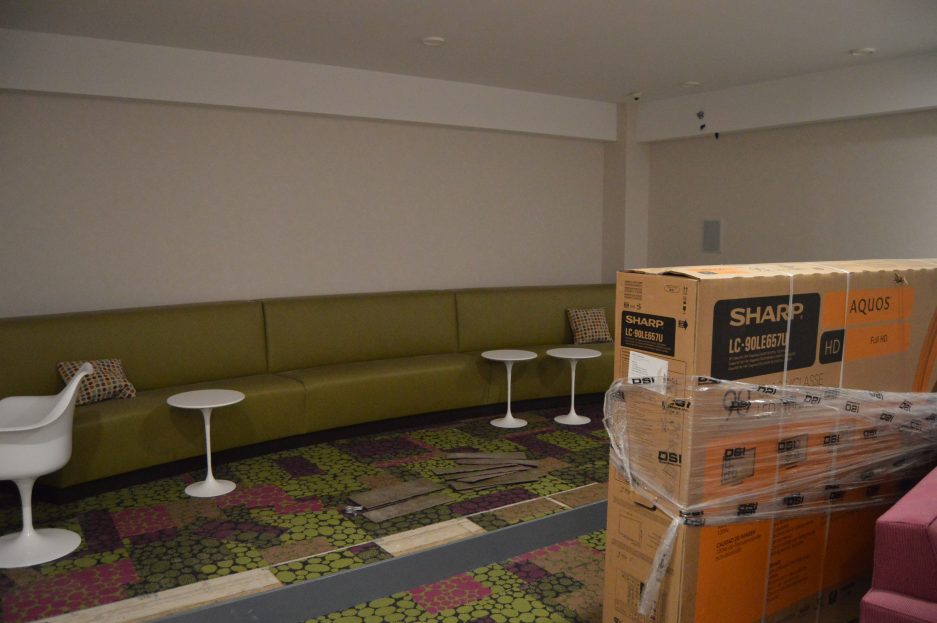 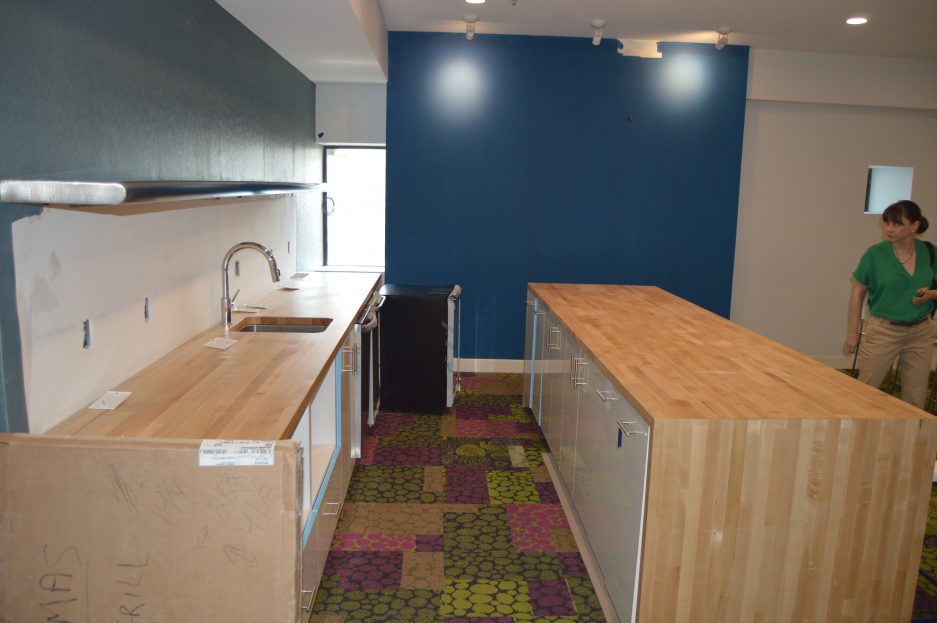 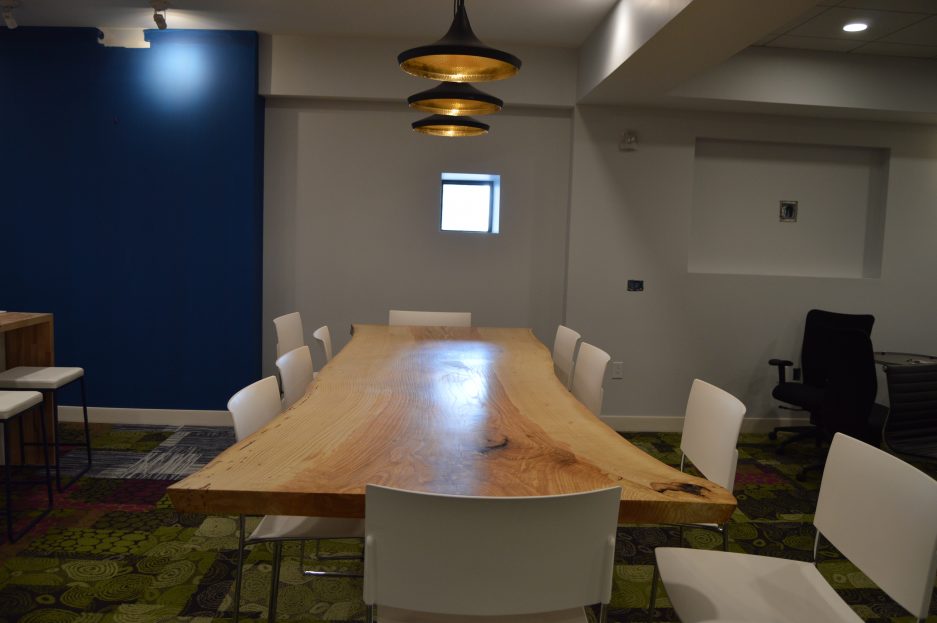 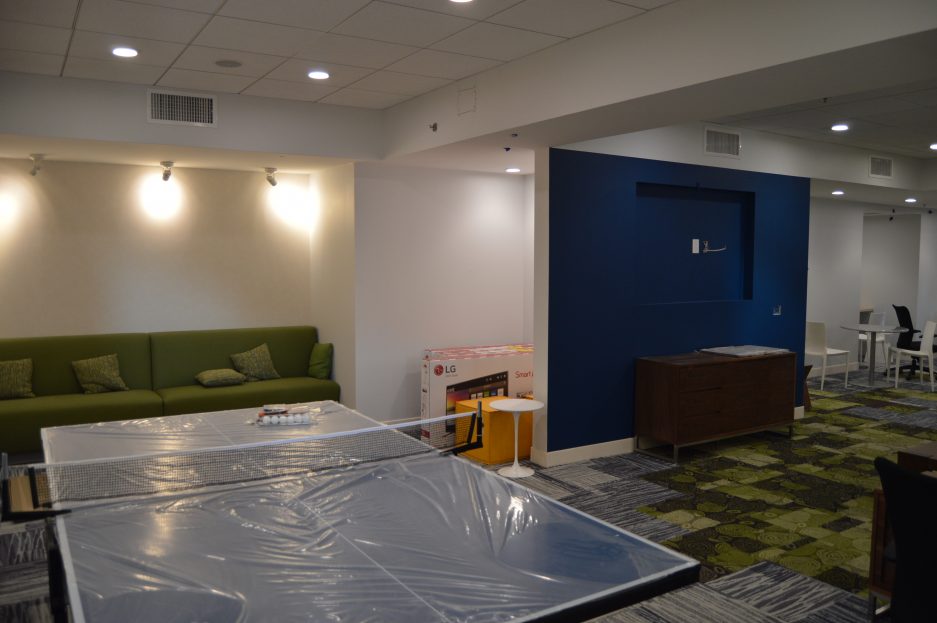 Lounge are with ping pong table and nook