Might this revitalize the corner of Castor and Cottman? Photo (and gallery below) by the author.

In 2003, the JCPenney on the corner of Castor and Cottman in Northeast Philadelphia shut its doors. I was in seventh grade at the time and, suffice to say, didn’t really think much beyond Wonder what they’ll put there next … oh my god, I hope it’s, like, a restaurant or something. What ended up going there was … nothing.

Naïve? Yeah, probably. But up until that point whatever vacant buildings were in the area had been there for so long that they were just part of the streetscape. The norm. This closing was something else. Because here’s what happened: the neighborhood felt more dead than usual.

Now, wait. If you’re a fellow Northeast-er (I’m tired of the term “NEastie”), before you get all huffy and want to sock me, hear me out. First of all, hi. Second, I mean, “more boring than usual” in the same way that I meant “I hate school” at thirteen years old, but cried when it came time to graduate the eighth grade.

I know the neighborhood is not total “post-war wasteland,” as someone (who didn’t know I was from the area) so bluntly said when describing it in front of me. Hell, I even wrote an embarrassing piece about how much I love the place when I was an intern. Viewed objectively, however, there really isn’t a whole lot going on there save for bars, places to eat, and, as the author in the cited link states, “drab strip malls.”

And that’s fine. The Northeast is a highly residential section, and usually feels like an entity unto itself, separate from the sixth-most popular city in the country. Case in point, a visiting cousin of mine once said to me, “What is this? I’ve never seen anything like this before…it’s weird. Is this a suburb or is it still Philly?” Ugh.

But, I digress. I’m just trying to say that “drab strip malls” aren’t bad for it, so when one closes, another should open. Ideally.

The nearby Roosevelt Mall, bless its heart, is a place I never go to anymore unless it’s to go to the post office. But as a kid whose parents were a part of the If You Want To Buy Something, Get A Job school of raising children, the Mall–or any place frequented by the public–becomes a go-to hangout away from the watchful eyes of parents.

(Bonus memory you should probably skip: At one point, some friends and I adopted “the Nest” as a private clubhouse where we’d sit and talk when the mall or supermarket lost its appeal. What was it? The second-floor landing of a furniture store’s back stairwell exit.)

My point is this: The neighborhood becomes a lot more lively when there are places to go and people are out, whether it’s actual shoppers, people going to work there, or harmless, loitering kids. It’s a no-brainer, obviously, but I suppose realizing this only happened for me when the JCP/former Clover/former former Lit Brothers got shuttered. Suddenly, people were/are only there when waiting for the 70 or 77. The bus comes and the once sub-major corner is dead.

Or will have been dead.

One day I noticed road construction there, and next thing I knew the doors to the shuttered department store were open — not for business, but for construction. What were they doing? Turns out, it’s the fruit of the Central Northeast District Plan to revitalize major business corridors in the area (an initiative born from the larger Philadelphia 2035 Physical Development / Comprehensive Plan):

Cottman Avenue is the spine of the commercial district. Next to Roosevelt Boulevard, Cottman Avenue carries the highest volumes of vehicular traffic and transit service in the Central Northeast, making it a highly visible route for shoppers and commuters. Cottman Avenue is also the space through which most people move between the public realm of the city’s streets and the private domain of stores, restaurants, offices, and parking lots. The shopping complex, together with the Northeast Regional Library and the District Health Center #10, combine to create an unofficial “town center” of the Northeast. Strengthening the identity and reinvestment potential of this section of Cottman Avenue is a long term goal for this focus area.

Yes! Maybe it’s a movie theater (a sorely missed attraction in the area — no offense, Grant or a store that my sister won’t consider “ratchet.” In March, the Northeast Times reported that a Burlington Coat Factory, Bob’s Discount Furniture, and TJ Maxx are to occupy the space.

Developer Kimco Realty is behind the project and had a groundbreaking on March 4th. Despite the new tenants not being what I had in mind, I’m pleased. Although, it turns out the TJ Maxx might not be included, as seen from a recent layout of the site on Kimco’s website: Now, if only they’d fix up the White Wall of Despair that is the Toys’R’Us back wall facing the street (the only entrance faces the parking lot behind it because amazing planning, guys).

Phone calls to the broker and developer with more questions about the project went unanswered. Here are some pictures: 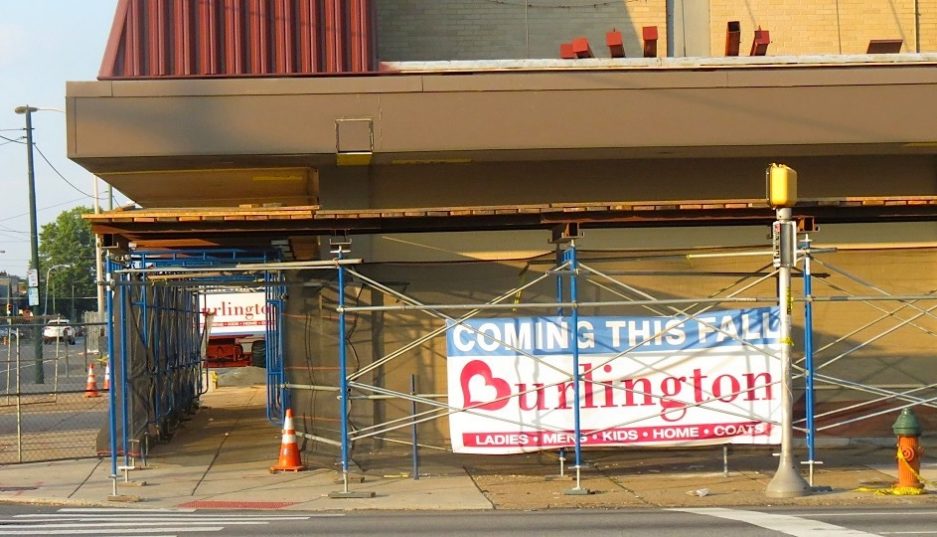 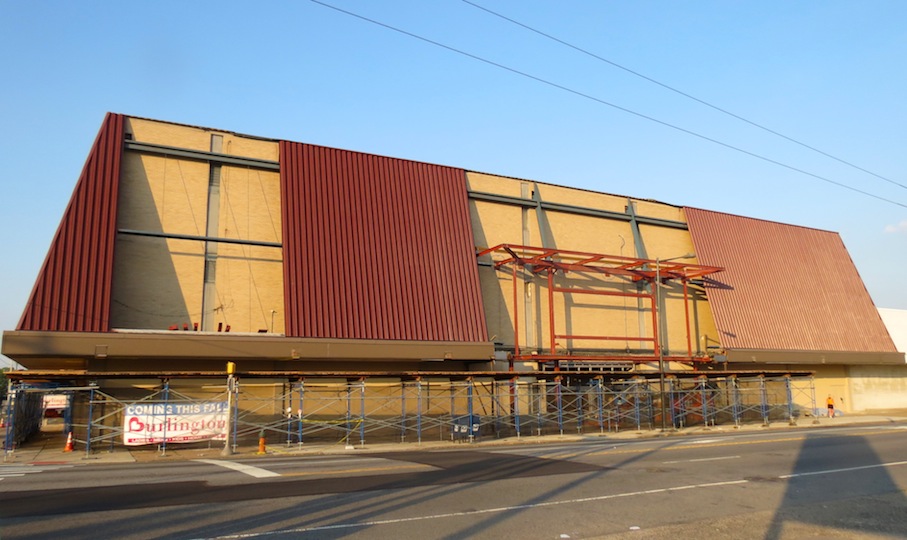 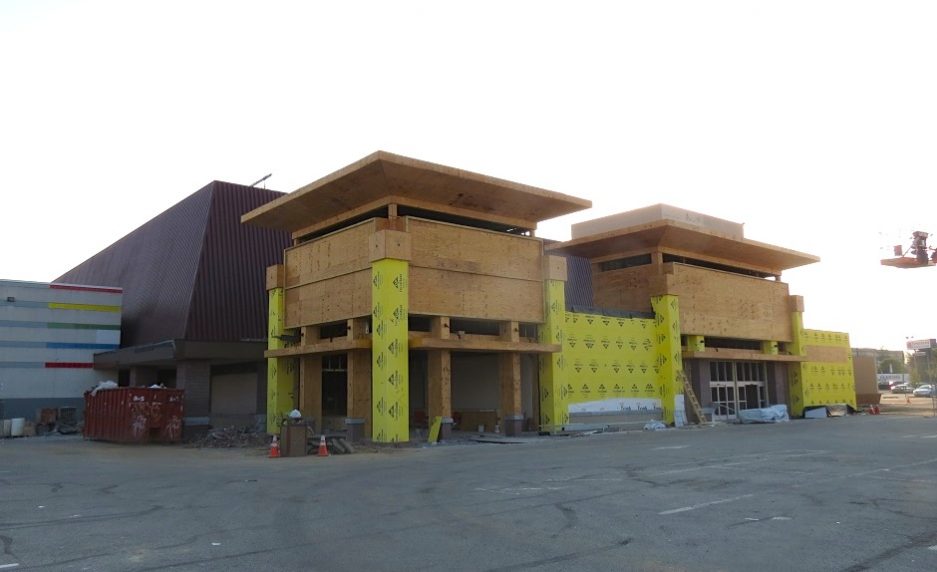 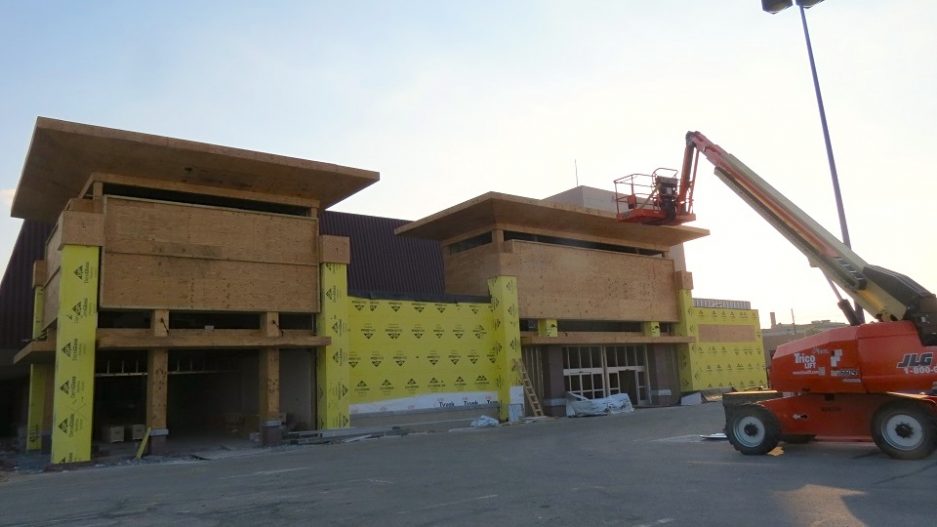 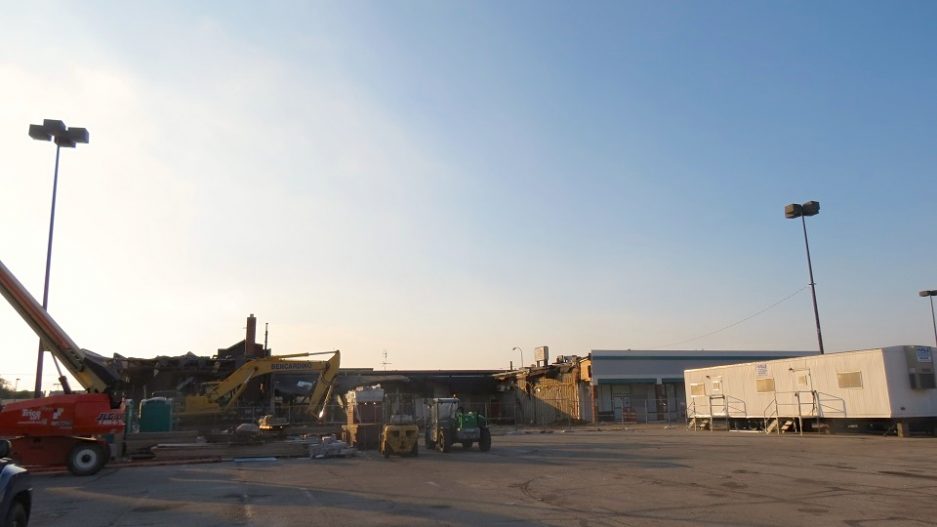