The couple’s dog stole the show. 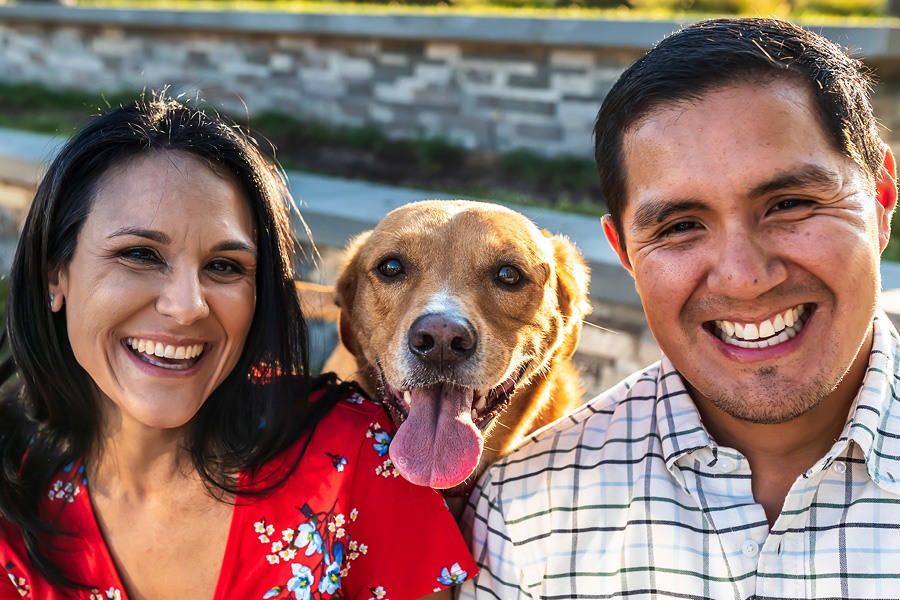 As we muscle through what are hopefully the last few days of cooler temps, we at Philadelphia Wedding thought we’d bring you a story that sings of summer in Philly. It’s a Cherry Street Pier proposal and Cira Green engagement-photo session complete with sunshine, breezy dresses and puppy love. Michele Granja of One L Photography snapped it all below. 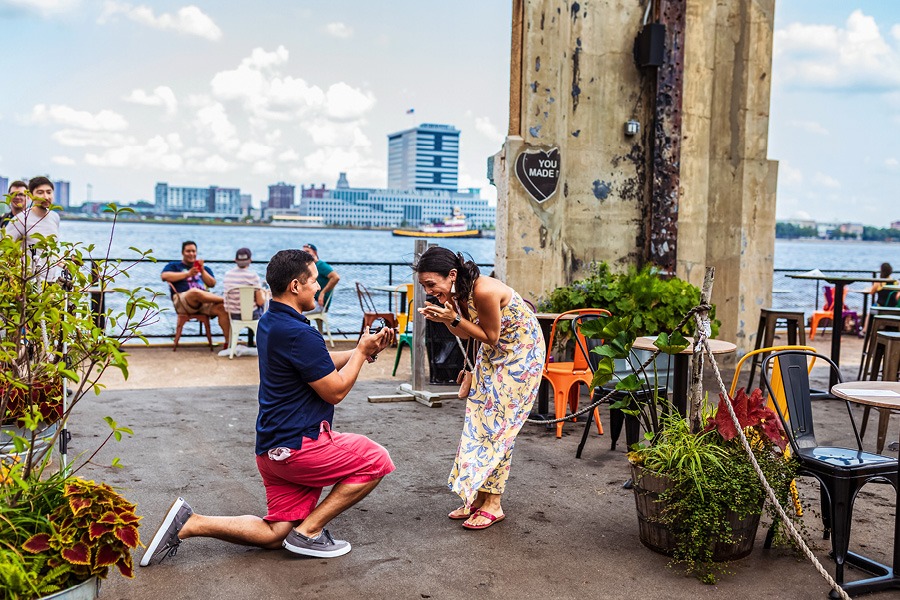 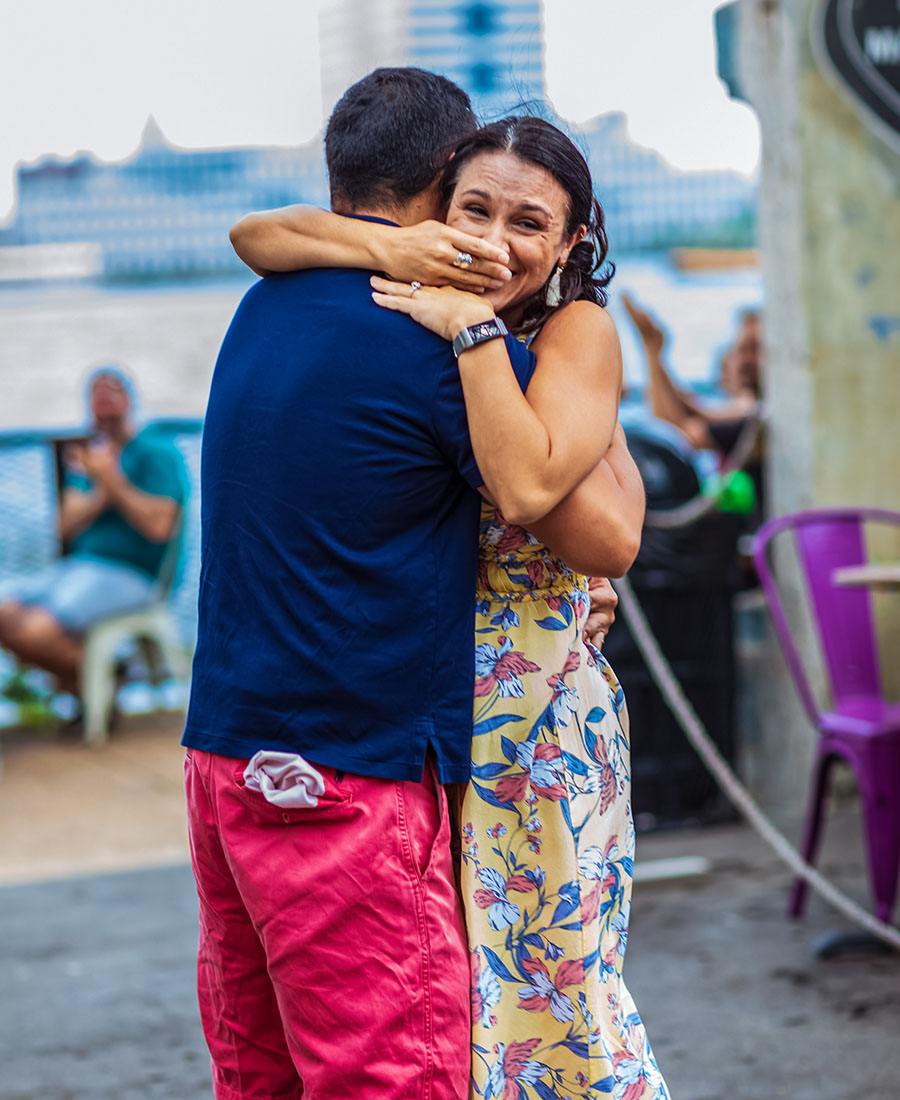 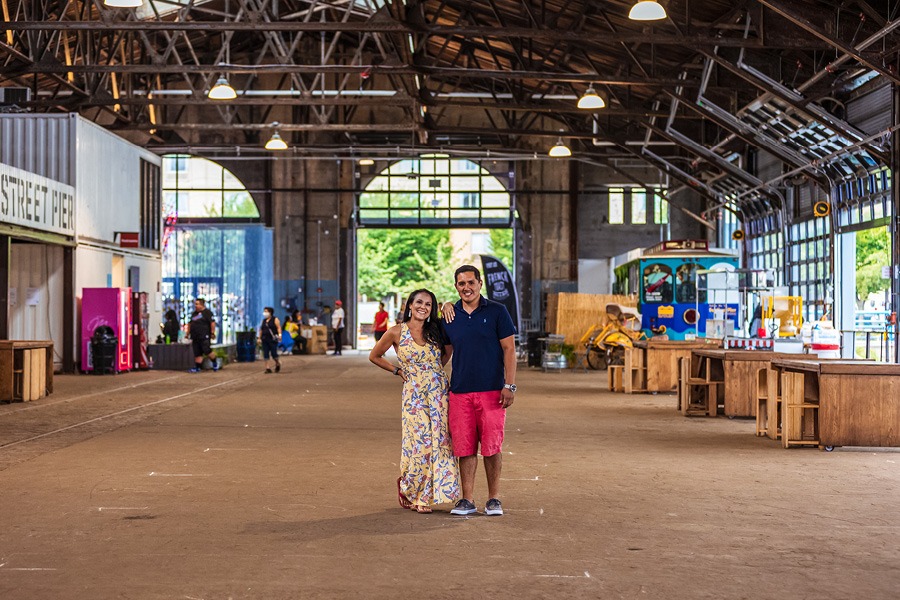 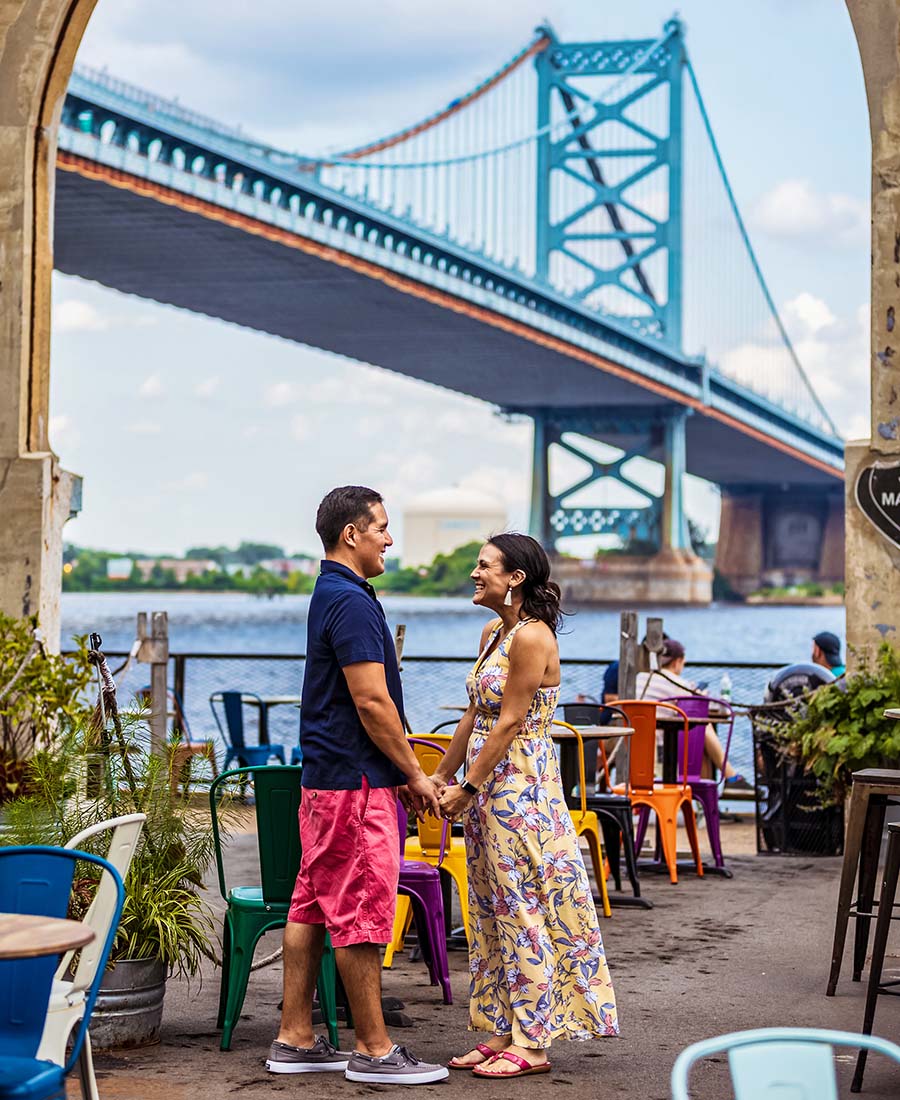 The couple: Angela Grimley, 39, and Michael Remsen, 37, of Pennsport

How they met: The year was 2018. Angela had recently gotten out of a long relationship and decided to give online dating a go — the Happn app appealed to her because it only shows you people with whom you might’ve crossed paths in a nearby radius. Working in a high-trafficked area of Center City, she figured chances were high for a sweet encounter, and that led her to Mike’s profile. After a few weeks of online chatter, they met up for Mexican food, arcade games and deep conversation — thanks to Mike’s admission that The Office was his favorite TV show and his straightforward and honest personality.

Their proposal story: Almost three years later, in July 2021, Mike pulled off a proposal at Cherry Street Pier that felt fitting of his top sitcom. He tricked Angela into thinking they were going to Morgan’s Pier with their friends, Nick and Jen, who “changed plans” at the last minute and went to Cherry Street Pier instead. He also hired a photographer, Michele Granja of One L Photography, to capture the moment. When the couple got to the center arch, Mike got down on one knee. 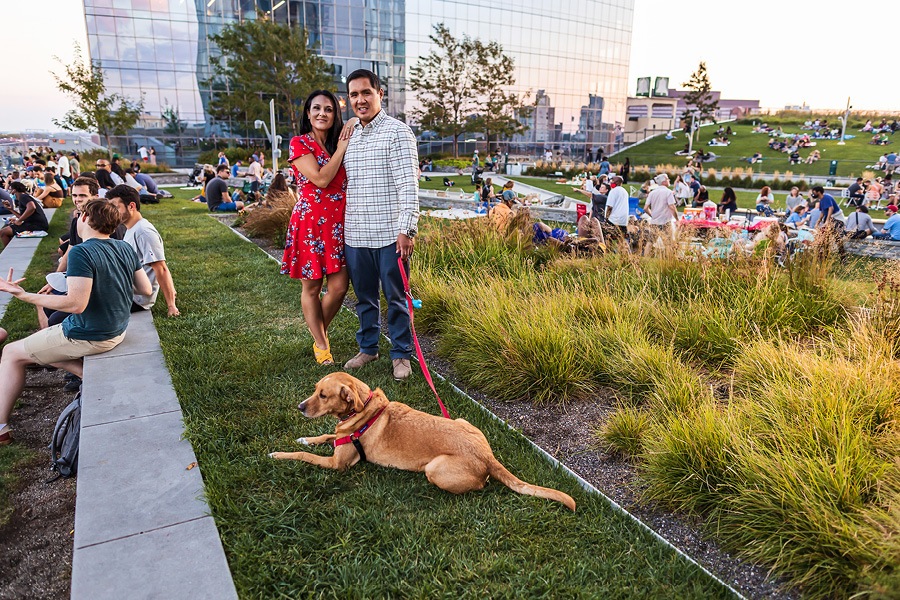 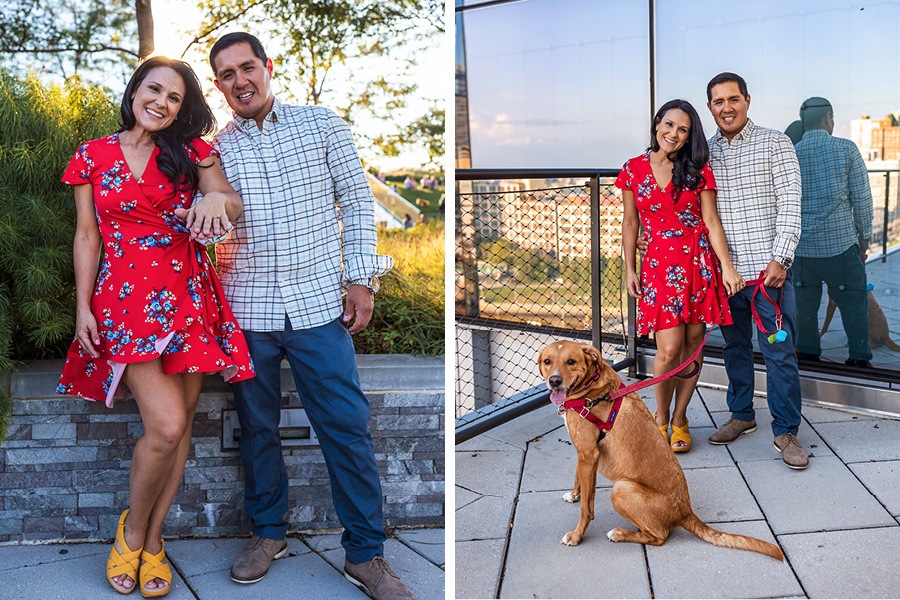 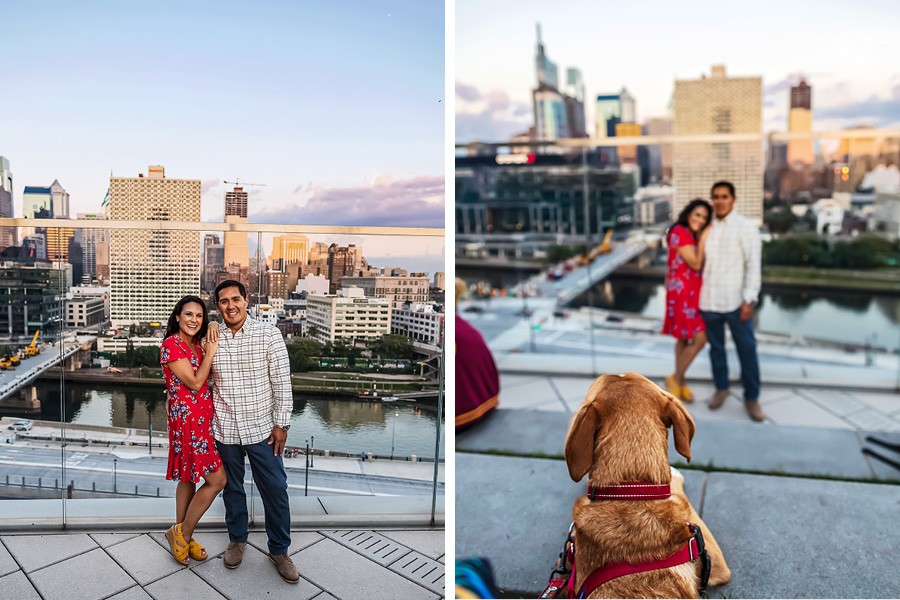 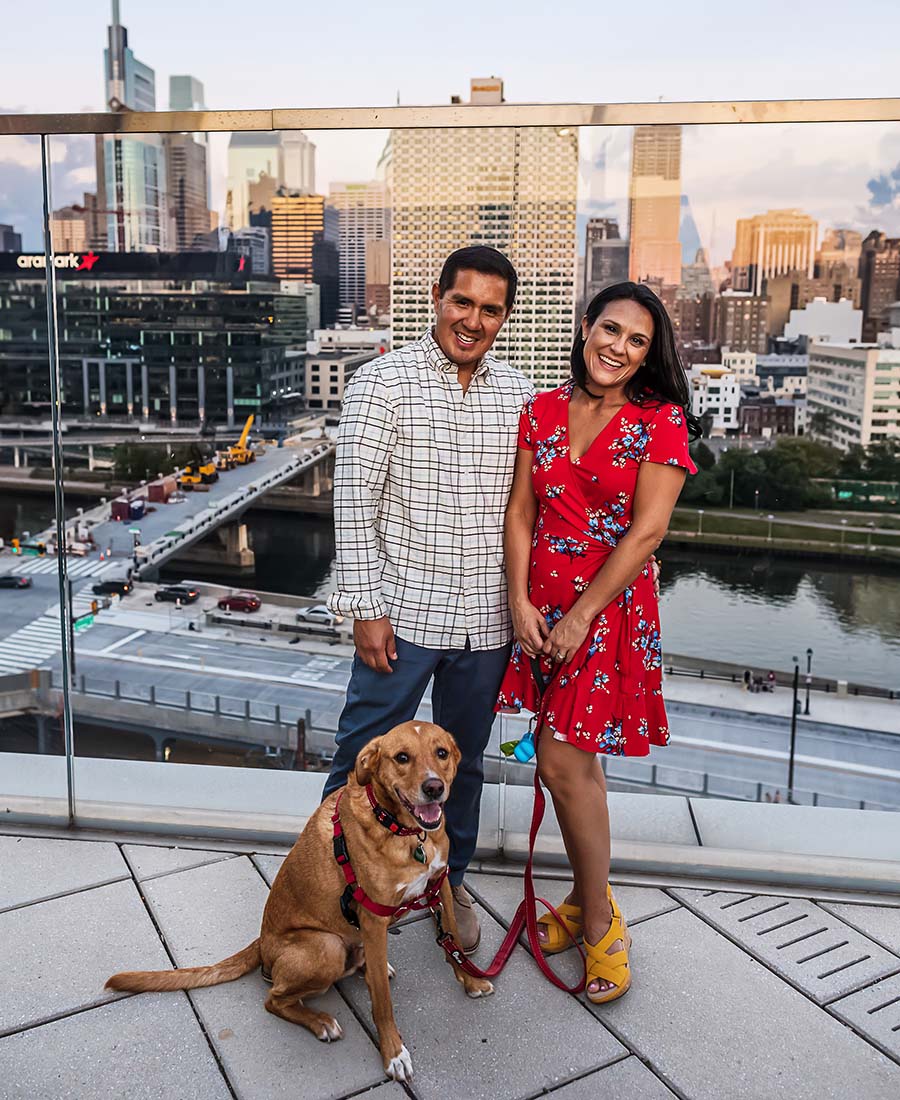 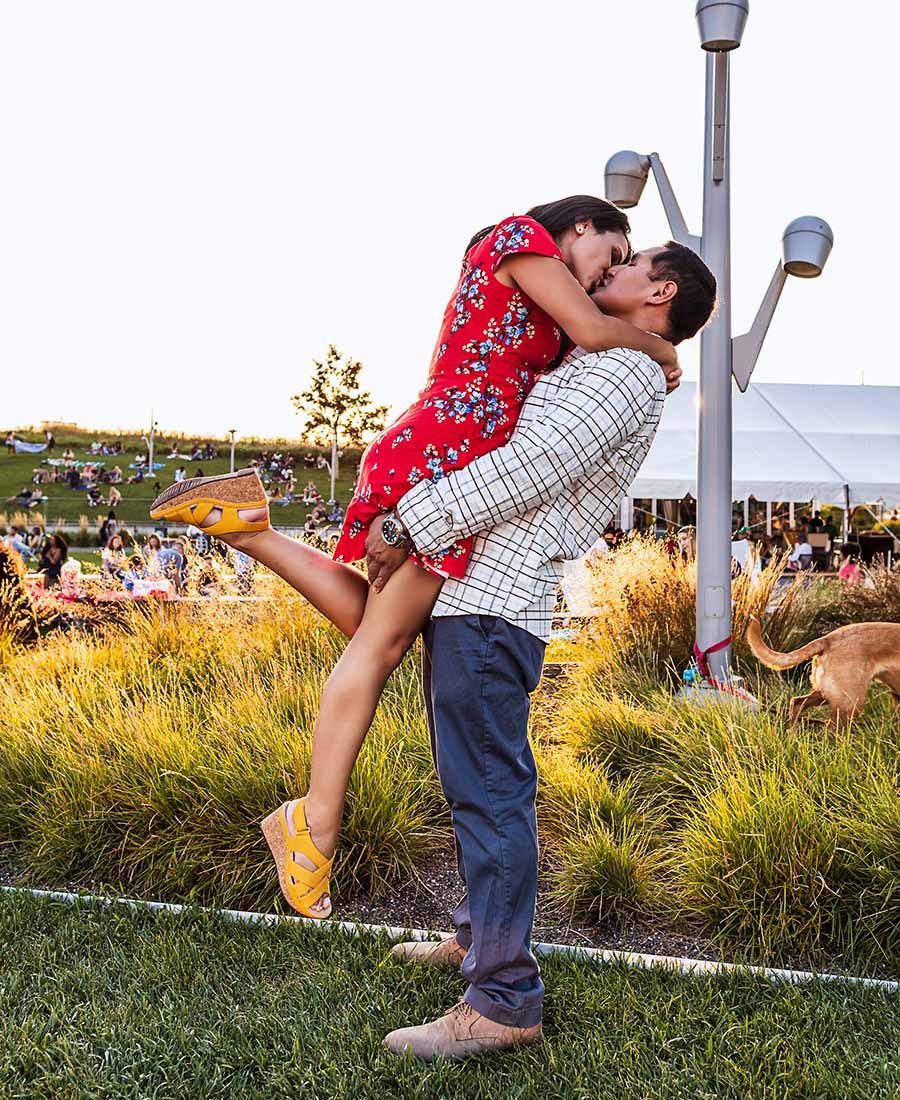 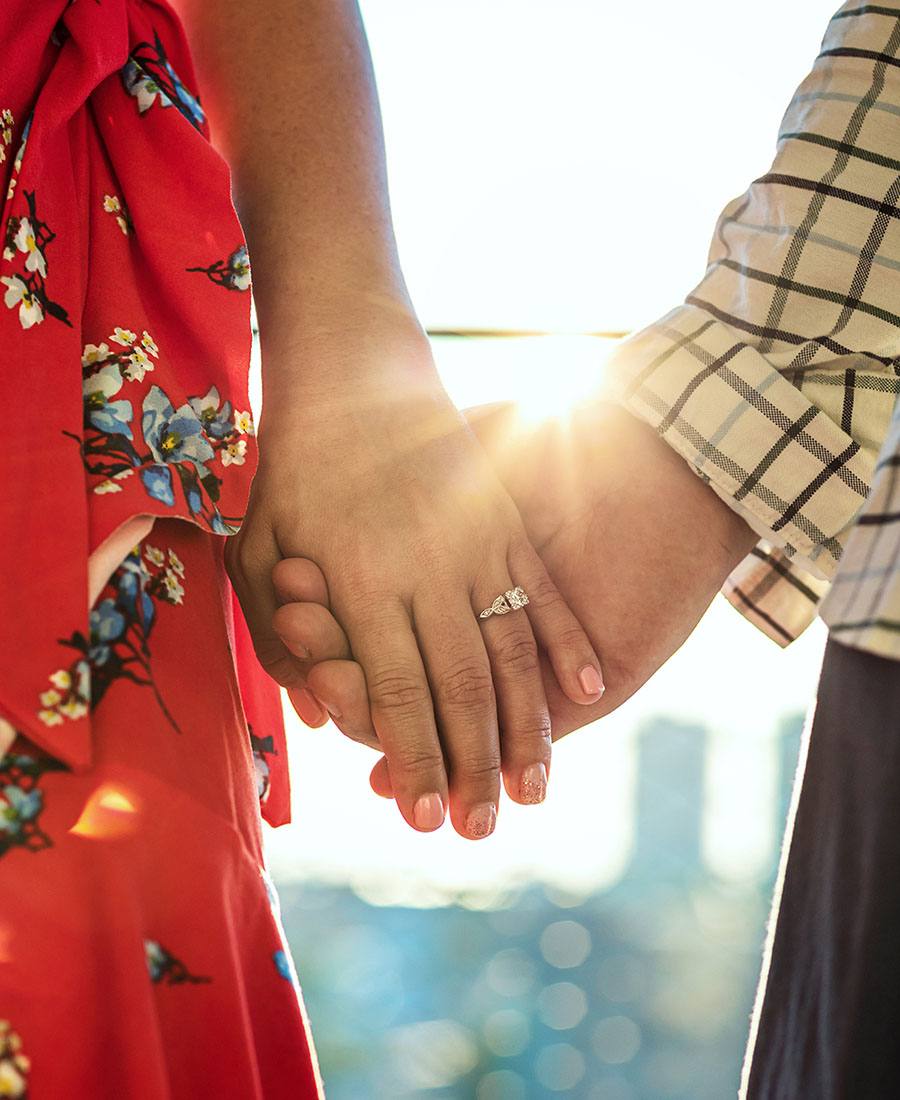 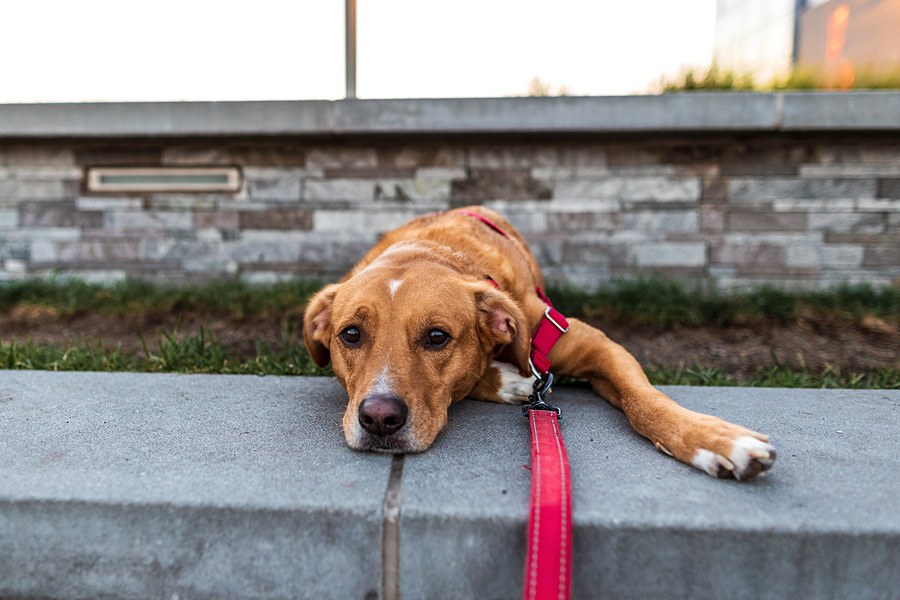 “I think he said something like, ‘This is really happening,’” recalls Angela. “He has tricked me so many times like Jim kneeling to tie his shoe and making Pam think he might propose. That was Mike’s favorite joke.” Angela, of course, said yes. “I think I even put the ring on my own finger because I was so excited.” Nick and Jen soon appeared, and shortly after that came surprise No. 2 — an engagement party with friends and family at the Hilton Penn’s Landing.

The engagement-session approach: Angela and Mike chose Cira Green for their September 2021 photo sesh because of their personal connection to the rooftop green space. For one, the bride-to-be had planned a small birthday get-together for Mike there during the pandemic: “It was a special outing because we hadn’t seen our friends in a long time,” notes Angela. The duo also loved its unique, creative vibe (“we wanted a place that rang true to being city people without being in a generic location”), and that they could bring their dog, Judo, along for the fun. “We wanted it to be more like a family photoshoot in a location that was authentic for us,” says Angela, who donned a red floral dress that she wore when they closed on their house a few months prior.

Their four-legged friend: As tends to happen when a fur baby is involved, Judo was the star and completely captivated their photographer. “She said he’s the best dog she’s ever worked with,” says Angela. In one particularly humorous moment, while the couple was trying to stage a photo on the ledge of just the two of them, Judo popped his head out. “It’s probably my favorite picture of the day,” says the bride. 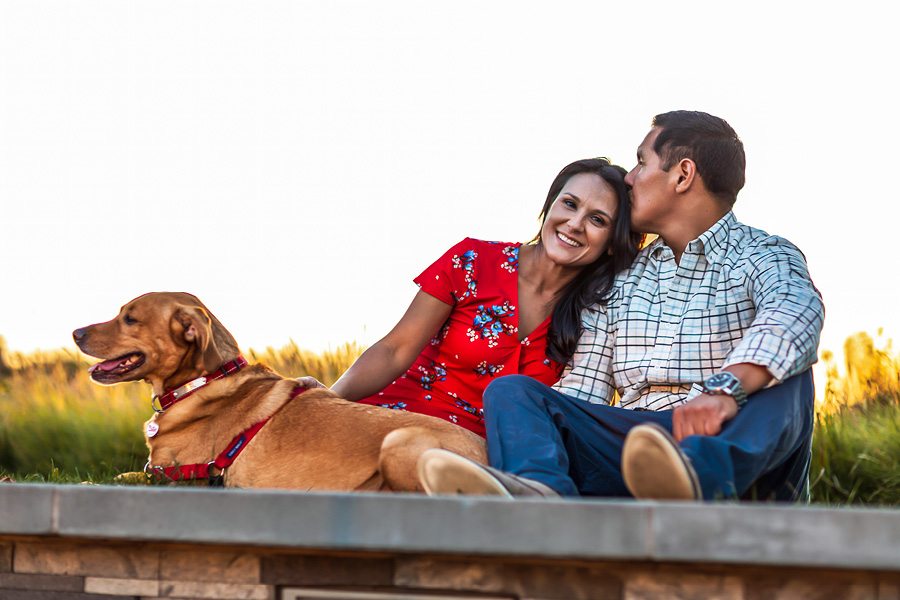 The wedding plans: While Angela and Mike won’t reveal too many details about their Big Day (they want to have some surprises), they will share that they are getting married on June 4th at Location 215 in Callowhill.