We Took Engagement Photos on Our Favorite Stoops in Rittenhouse

Afterward, the couple dressed up and went to the Rodin Museum for more modern-chic snaps. 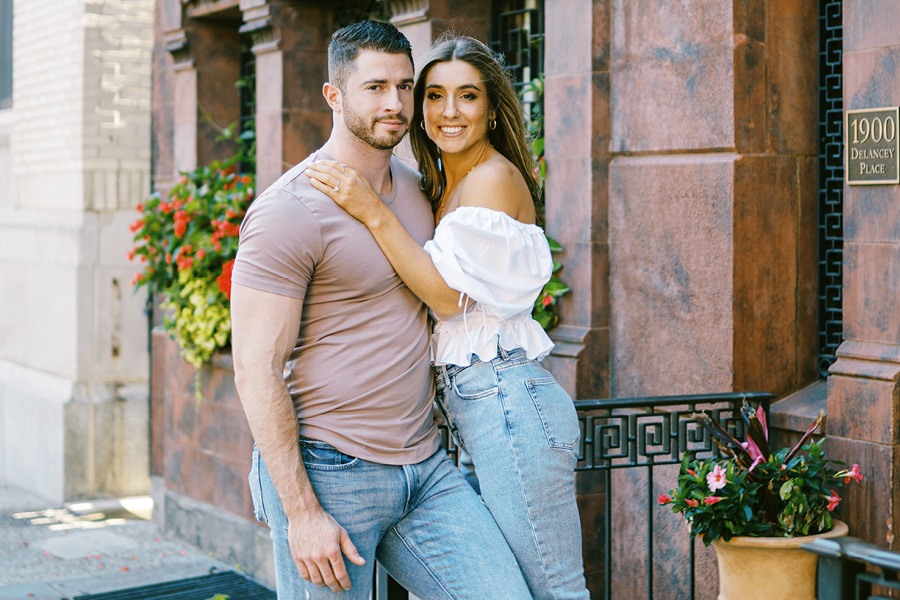 We’ve said it before and we’ll say it again: The streets and buildings of Philly are tops for photo sessions — from proposals caught on camera to weddings to every other related celebration. These Rittenhouse engagement photos are just another example. The couple wanted to take portraits on their favorite stoops before heading to Rodin Museum for more snaps. Minh Cao of Du Soleil Photographie pulled off their modern-chic session, which you can see below. 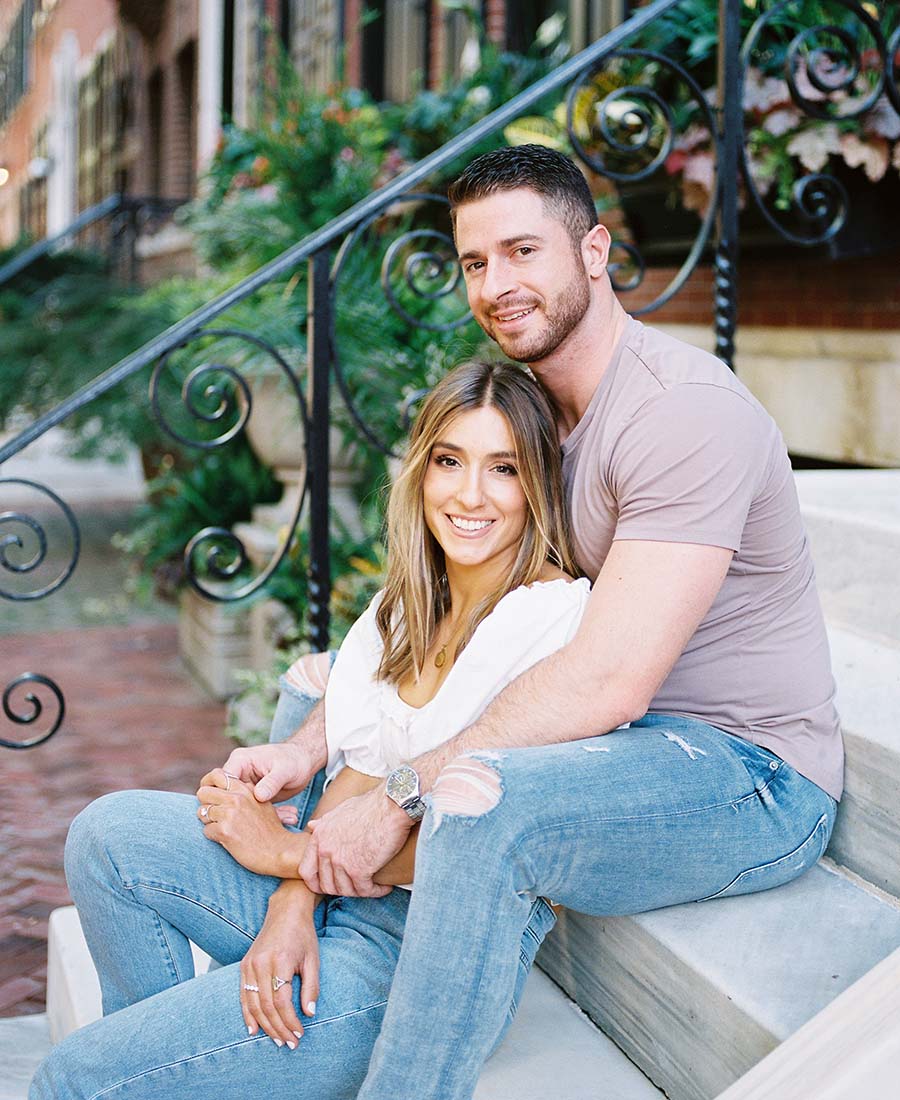 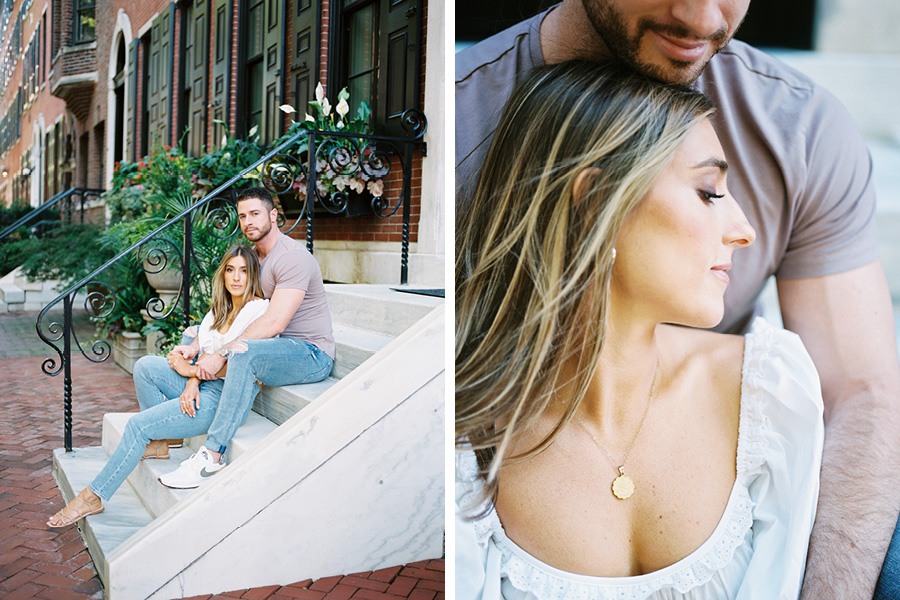 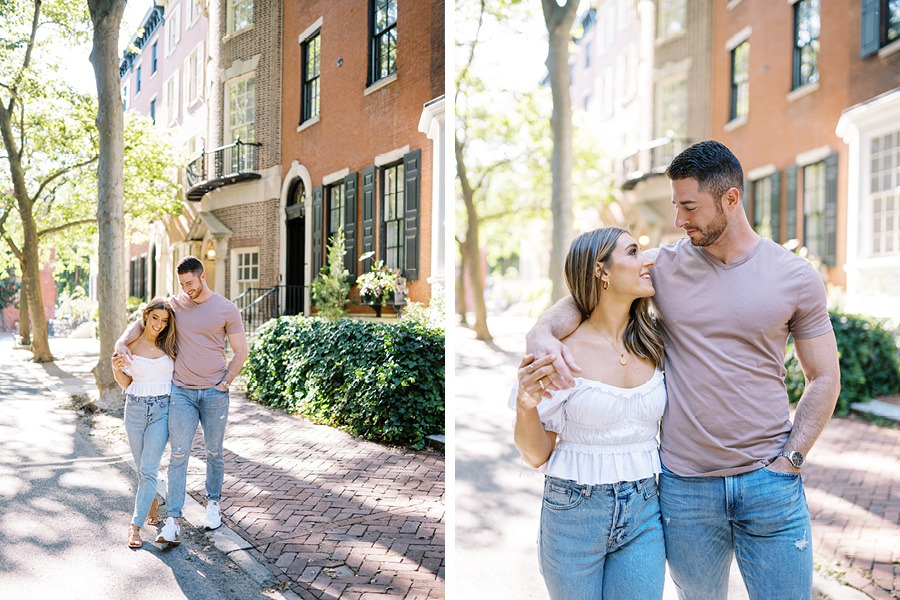 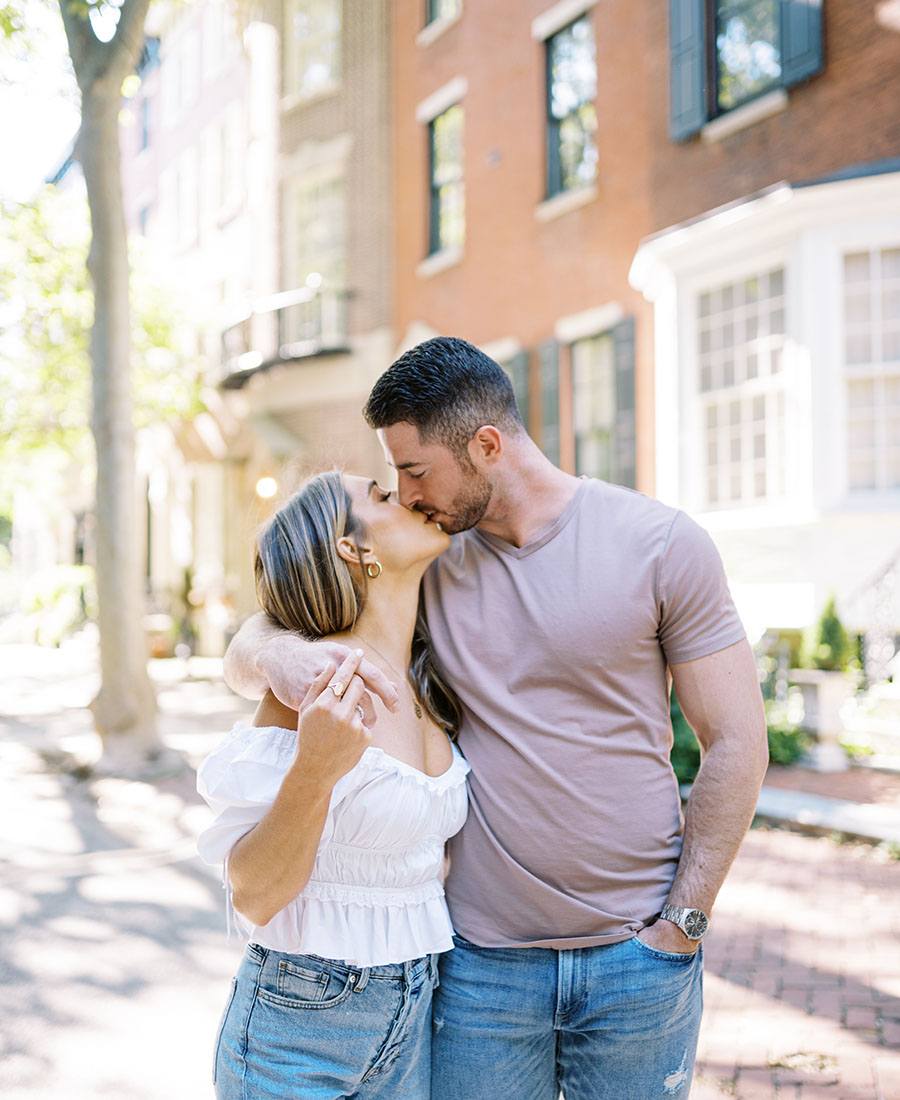 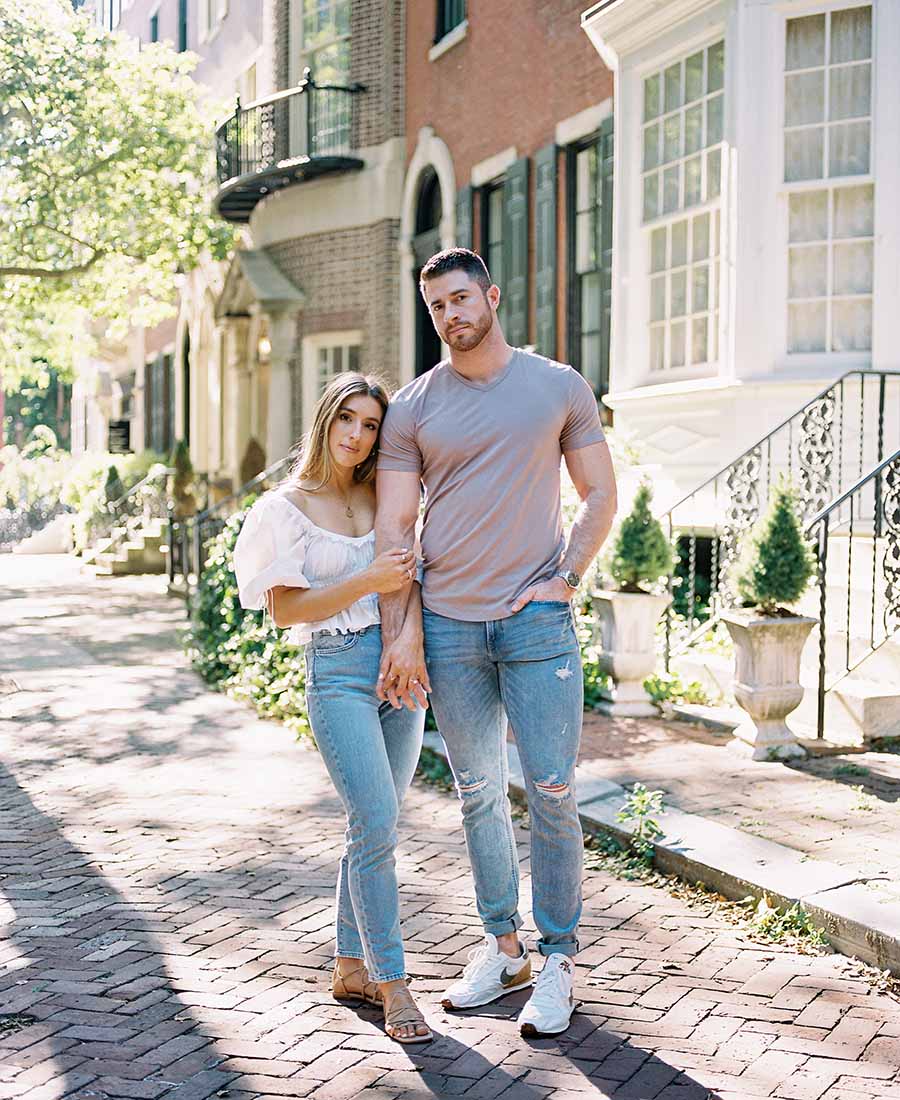 The couple:  Vanessa Pileggi, 31, and Thomas Fecca, 30, of North Philly

How they met: While the couple was introduced through mutual friends while attending Temple University, they really connected after graduation. They were both prepping for the CPA exam and bumped into each other at a live-study course in Center City. They began cracking the books together and soon started having drinks and dinner after study sessions. Those get-togethers quickly turned into dates. They were together for five and a half years before Tommy popped the question.

Their proposal story: Tommy had initially hoped to propose during the couple’s planned vacation in Cappadocia, Turkey, but COVID got in the way of that. Instead, on a pretty Sunday in August 2020, he got down on one knee at Longwood Gardens in Kennett Square. “The weather was beautiful, and we kicked off the day with champagne,” says Vanessa. “I should have known.” Afterward, the couple and his sister (who he’d enlisted to film the big moment) went to Vallini in Skippack for a surprise brunch with their families. 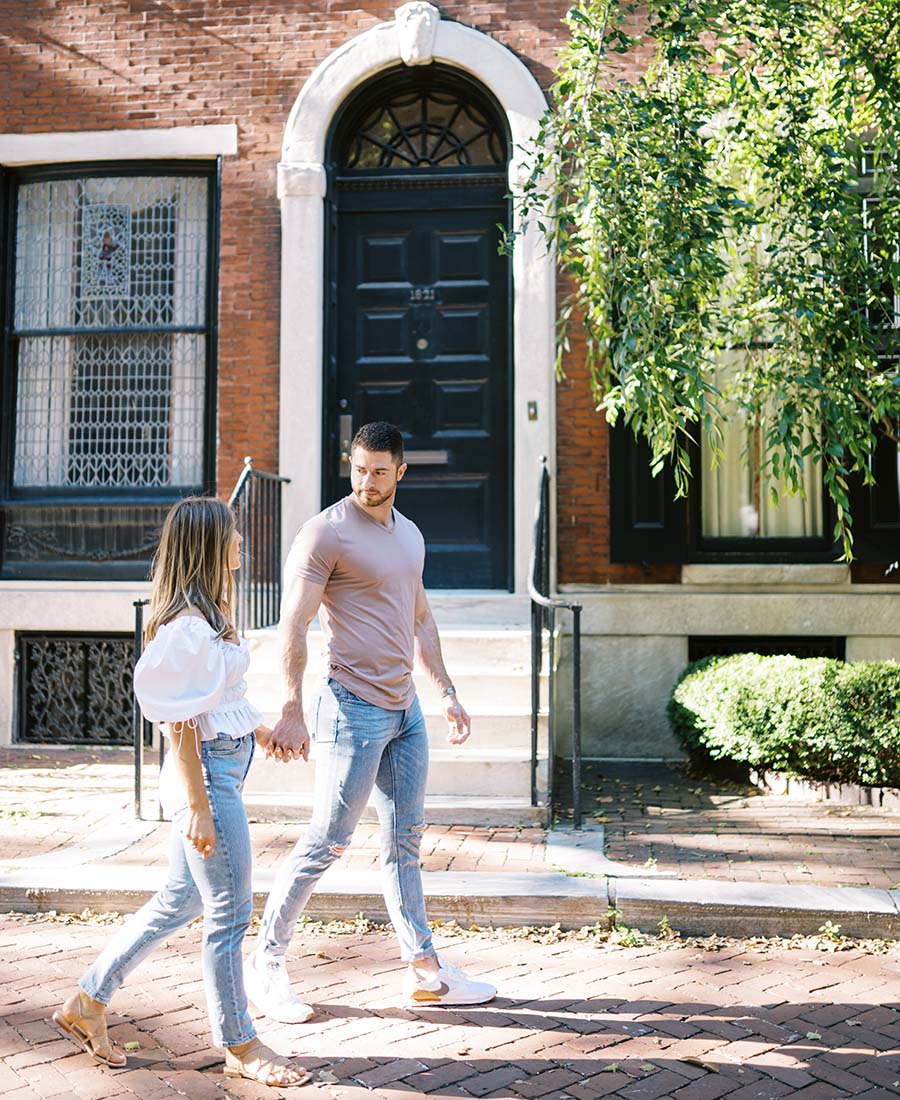 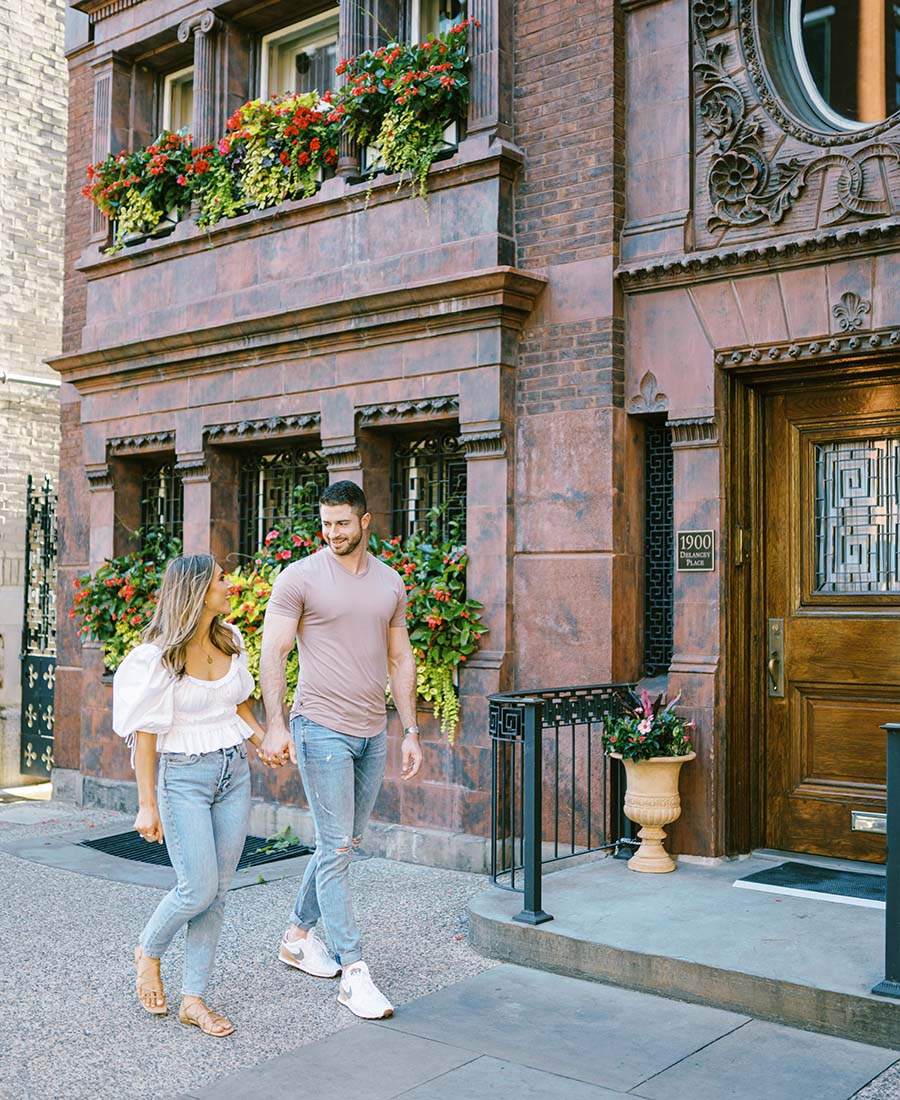 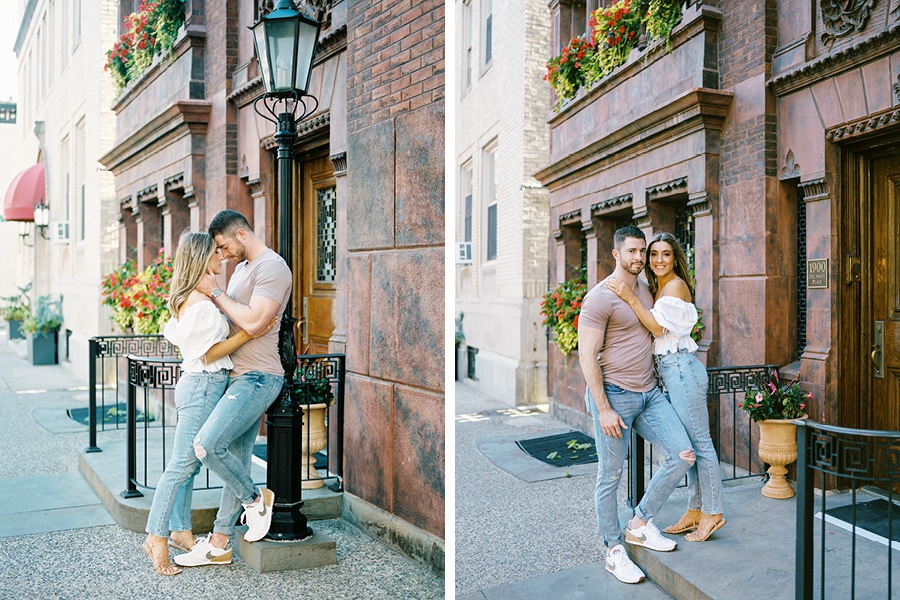 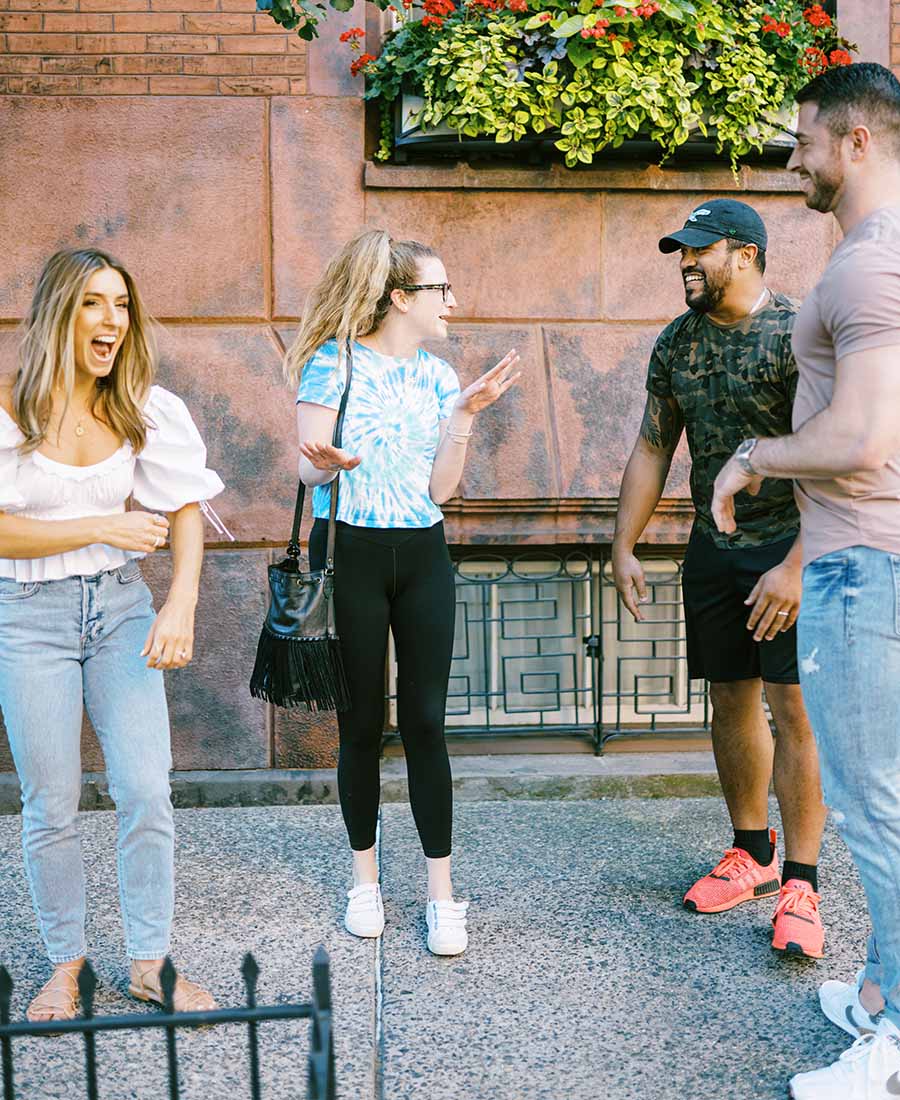 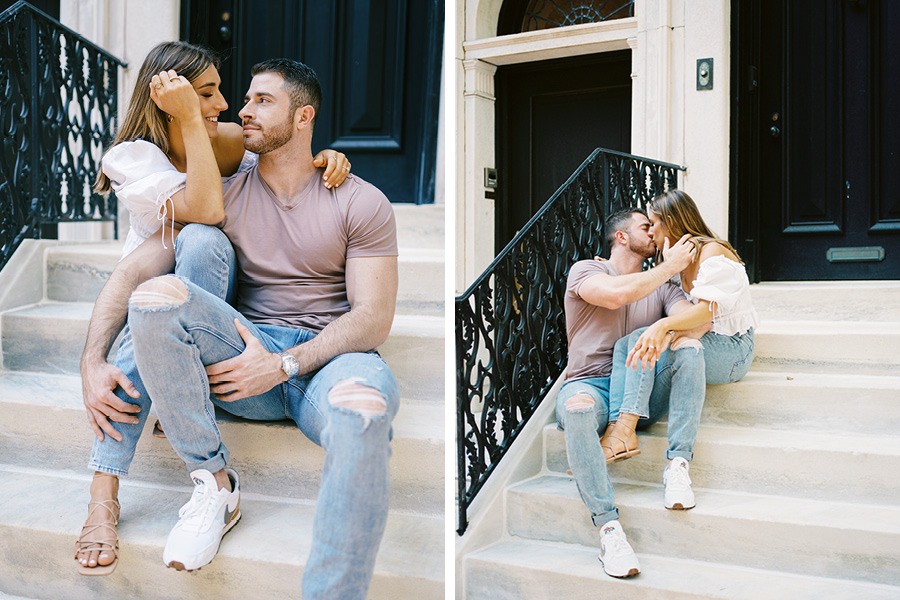 The engagement-session approach: Since they met and live in Philly, Vanessa and Tommy decided the city was the perfect spot for their modern-chic photo session. They chose Rittenhouse Square and the Rodin Museum because of the special meaning each holds for their relationship. The neighborhood is just a few blocks from their first apartment together (The Sterling), and they love strolling through the streets and admiring the grand detailing of all the homes — particularly on Delancey.

They chose the museum, meanwhile, because it’s a few blocks from where they purchased their first home in Francisville, and they thought the venue’s large columns and white marble background would fit the overall style of their photos.

The couple’s attire: Because they wanted to show off their casual, everyday lifestyle in the city, Vanessa and Tommy both sported jeans and T-shirts. “This look represented us just hanging around, going on bike rides, grabbing coffee and dining out at some of our favorite spots,” says Vanessa. She adds they felt super-comfy and at home. In fact, she says: “We like to joke that some of these stoop shots are us hanging in front of our multimillion-dollar home. (We wish!)” 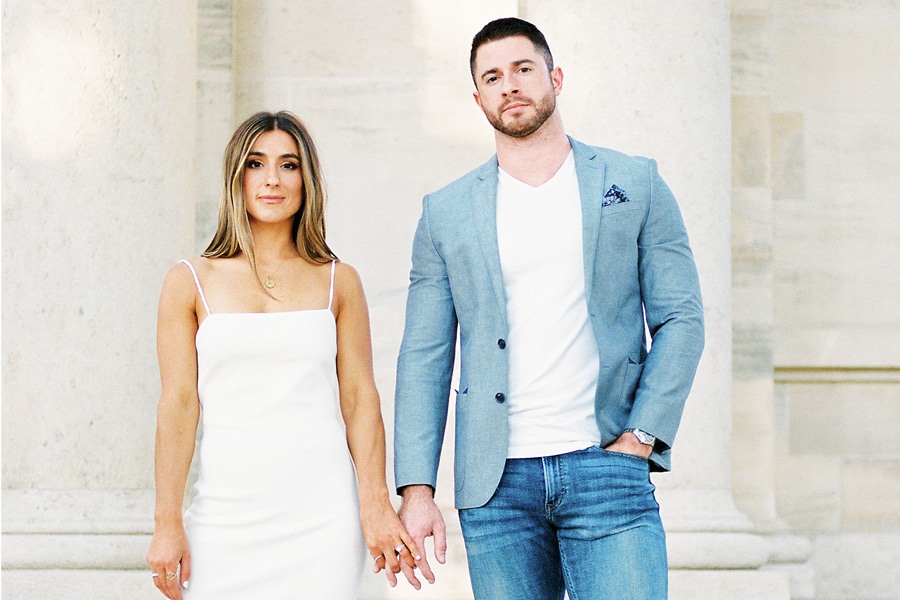 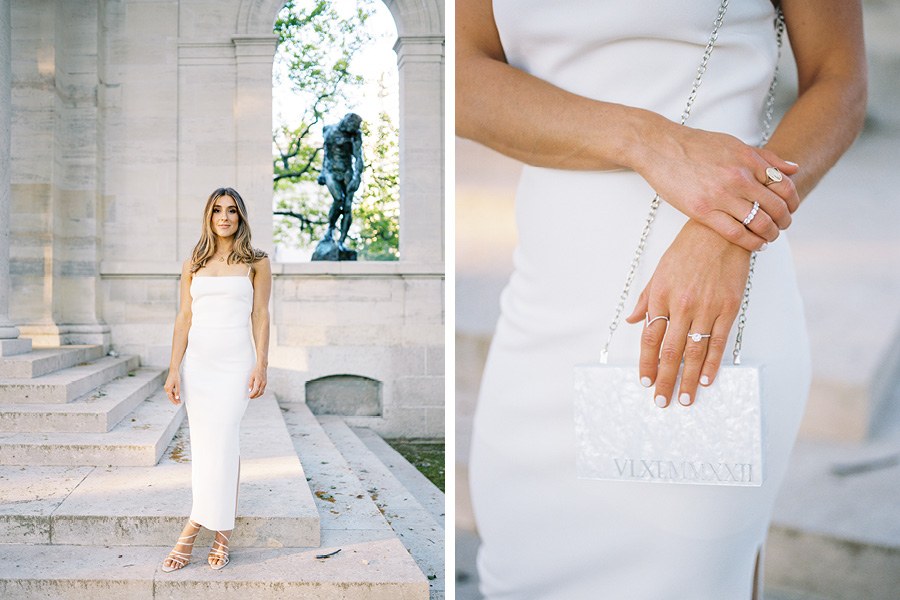 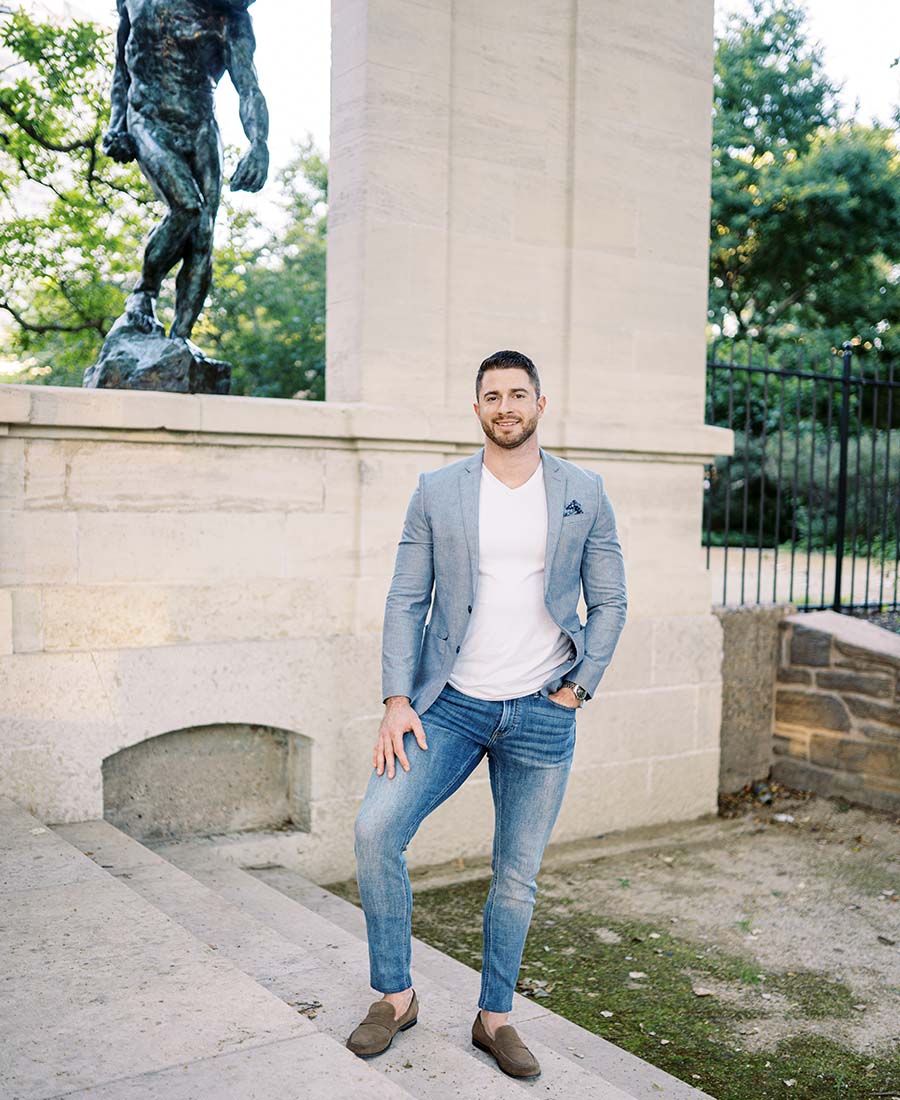 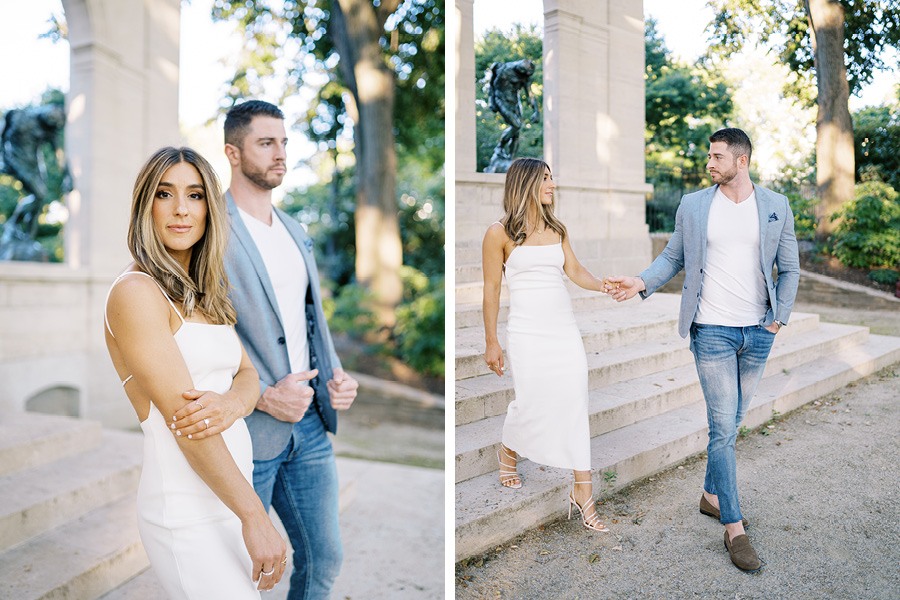 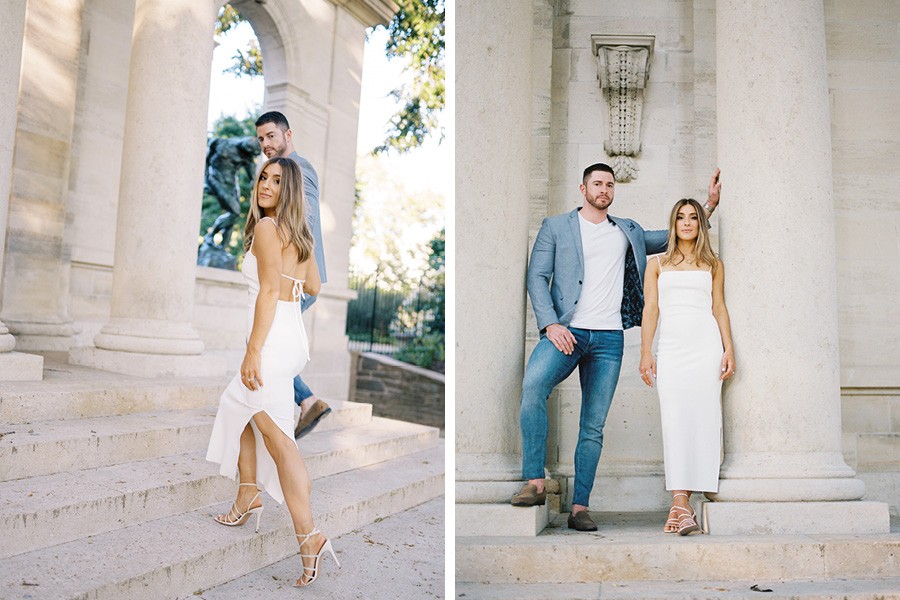 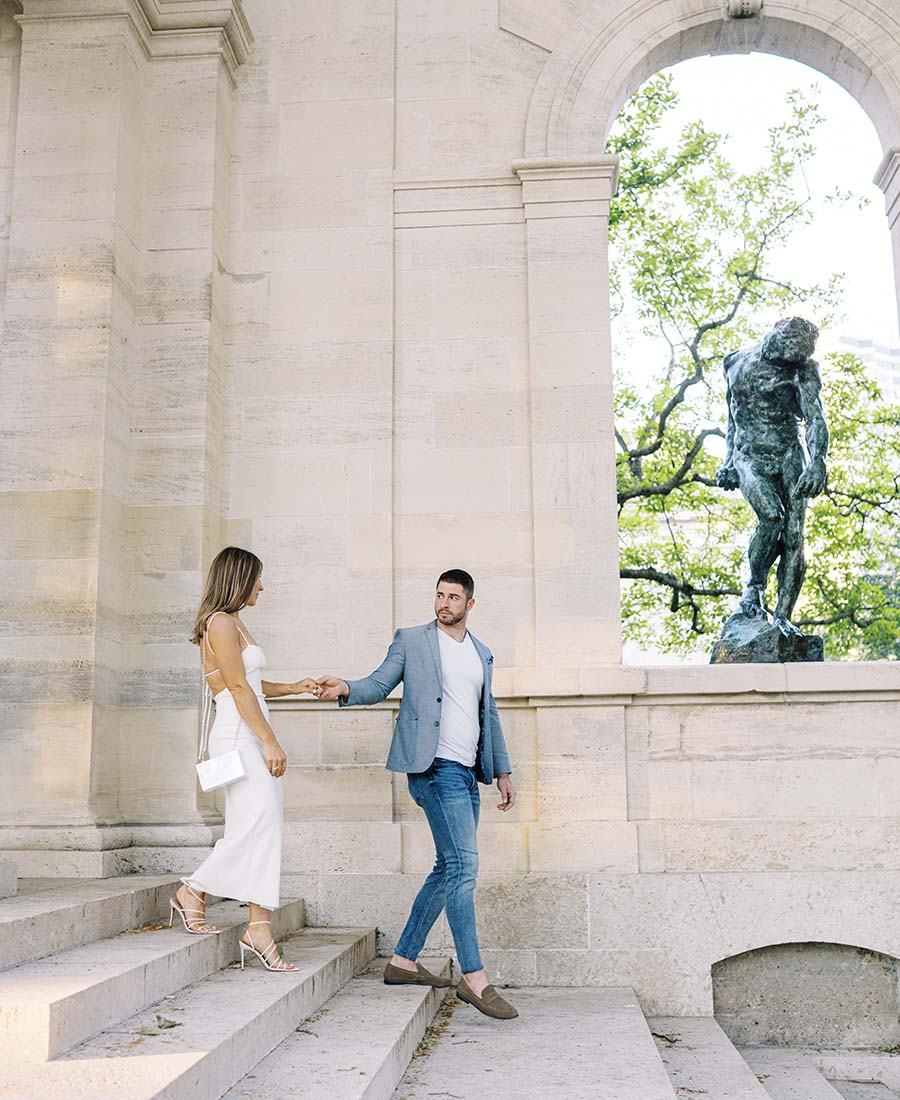 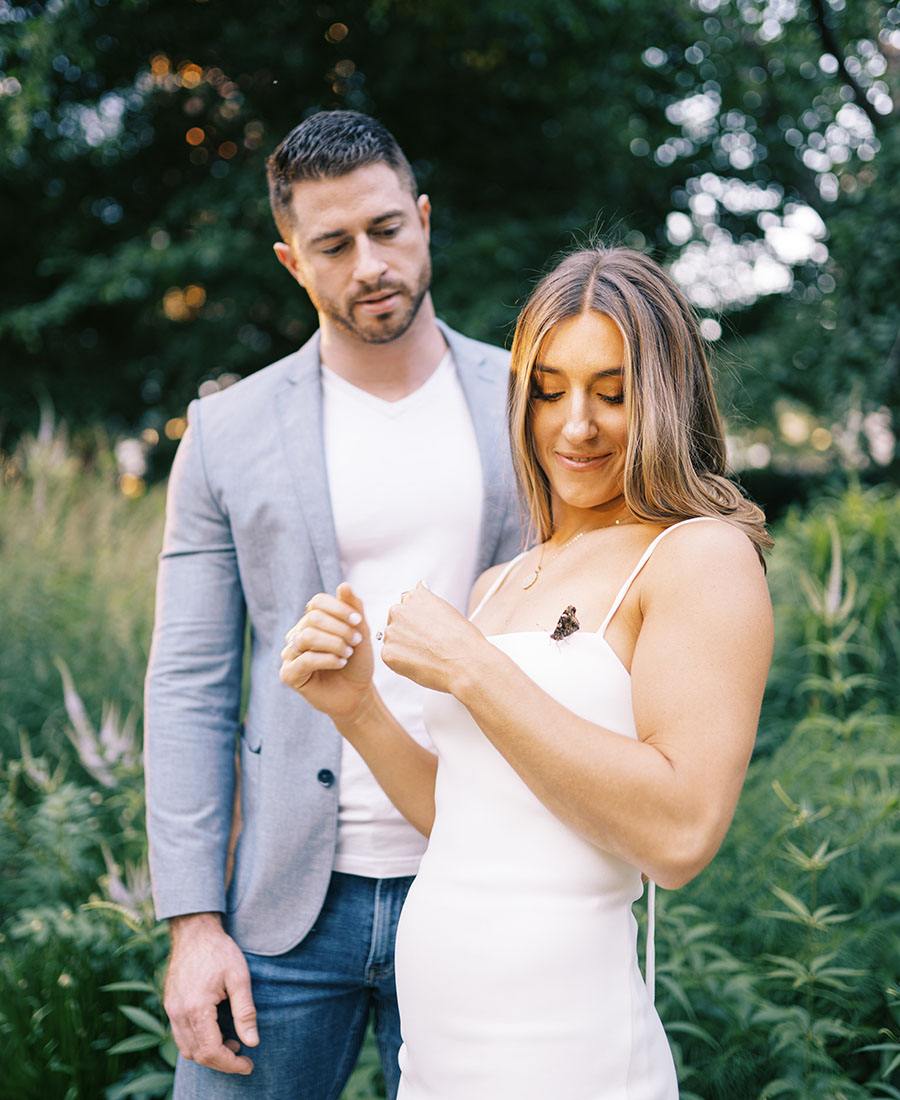 They used their Rodin Museum location to show off their fancier side. “We love to dress up … and enjoy the finer things in life,” says Vanessa. She wore a dress from Revolve and shoes from Alias Mae and carried an acrylic marble-inspired clutch etched with their wedding date in Roman numerals. “Minh helped us capture these walking ‘Hollywood’ shots that really made us feel like celebs. It was seriously something special.”

Some chance encounters: While the couple and their photographer were taking action photos on 18th Street, Vanessa and Tommy were surprised to see two of their close friends walking toward them and taping them in action. “We started cracking up and immediately lost composure,” says Vanessa.

Later, at the Rodin, a butterfly landed on the bride-to-be and stayed on her long enough for Cao to snap a few images. “We like to think of this as good luck for the future,” says Vanessa. “Fingers crossed that a butterfly finds us on the wedding day.” 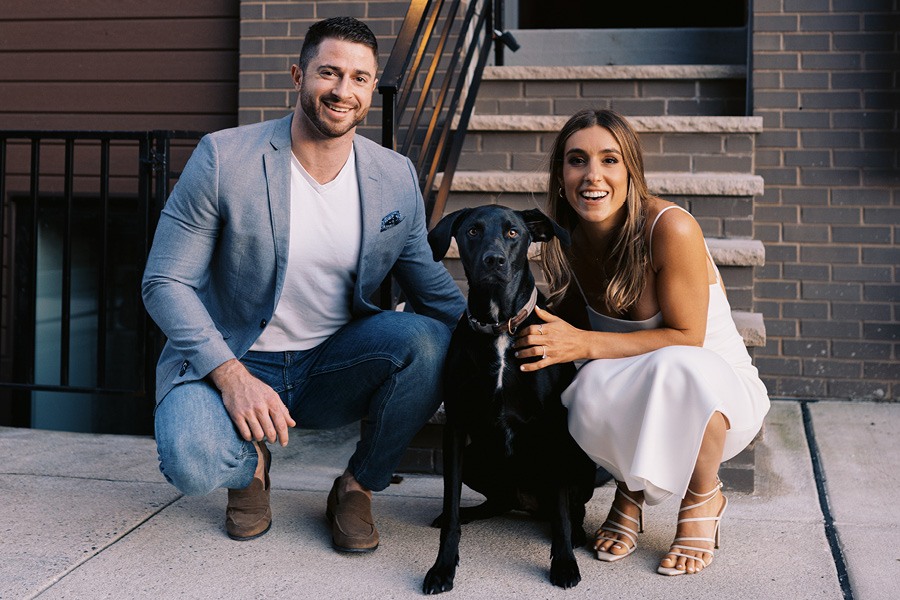 The couple with their dog, Cooper

The wedding plans: Vanessa and Tommy will be saying “I do” in June at the Ballroom at the Ben. “Having a Philly wedding is our official way to make our mark in the city,” finishes Vanessa.