“The best part ... is the outreach we’ve gotten from the younger queer community.” 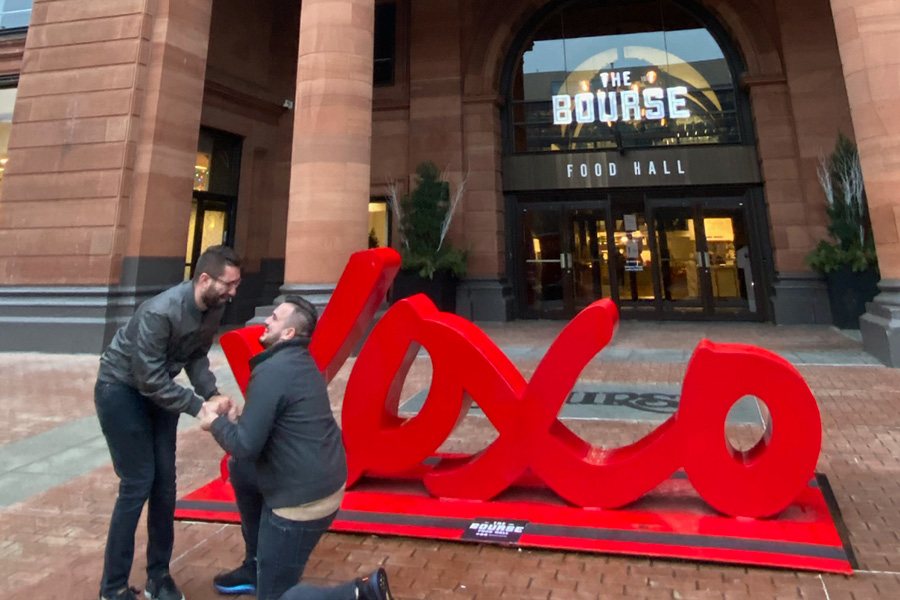 There’s something so irresistible about a proposal. Whenever we see them happening around Philly, we like to stop and watch the big moment and applaud the happy soon-to-be-weds. In the case of this Bourse Philadelphia proposal, the TikTok video of the engagement went massively viral — it’s been viewed some 8.6 million times. (The pterodactyl-like reaction is *so* extra.) We chatted with the couple about their story, which you can check out below. 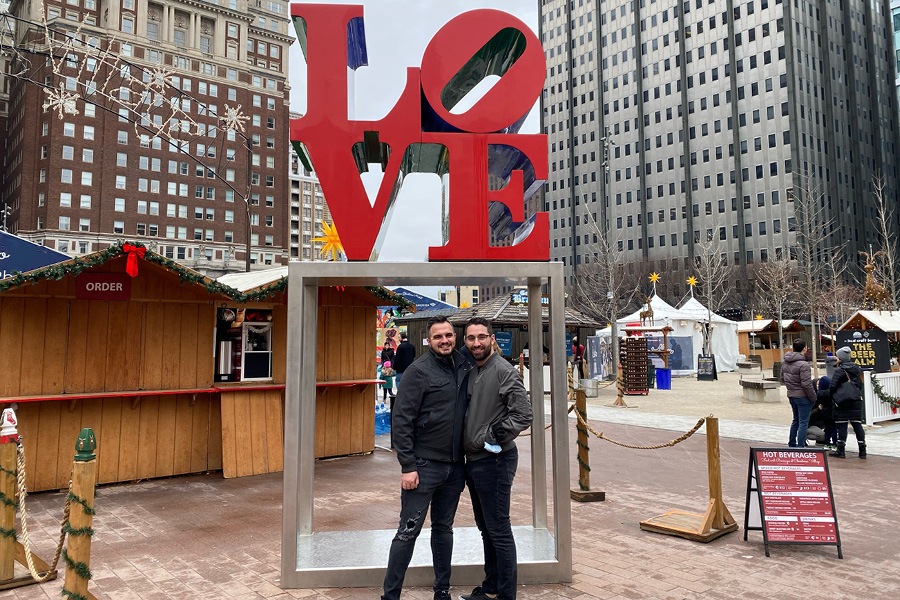 The couple: John Denning, 33, and Anthony Tufano, 27, of Orlando, Florida

How they met: John and Anthony first crossed paths at a Valentine’s Day party in 2020 thrown by a mutual friend in the OUT Sports League, a group serving the gay, lesbian, trans, and greater LGBTQ+ community of Central Florida. (John played kickball, and Anthony played dodgeball.) John spotted Anthony — a cute guy dressed up as Cupid, he says — and said hello when he walked by. Anthony didn’t seem to notice. But two days later, Anthony messaged John on a dating app, saying he recognized him from the soiree. They exchanged numbers and shortly after that (thanks to a bit of persistence on Anthony’s part) grabbed a casual dinner at Orlando’s Loading Zone Philly Steaks. John ordered for Anthony, who’d never had a cheesesteak, and the couple dated for just under two years before getting engaged.

The proposal plan: While the engagement didn’t take place till this past December, John had known since an October 2020 visit to Philly (his twin brother, Doug Denning, and Doug’s partner, Fred Samborski, live in Manayunk) where he was going to pull it off: in front of the XOXO installation at the Bourse food hall. “I wanted the proposal to have meaning and be special,” says John. Philly was an obvious choice (remember those first-date cheesesteaks?), but the installation was significant, too: John once signed a card to Anthony “XOXO,” and the latter was confused because he had never heard anyone use it to show affection. 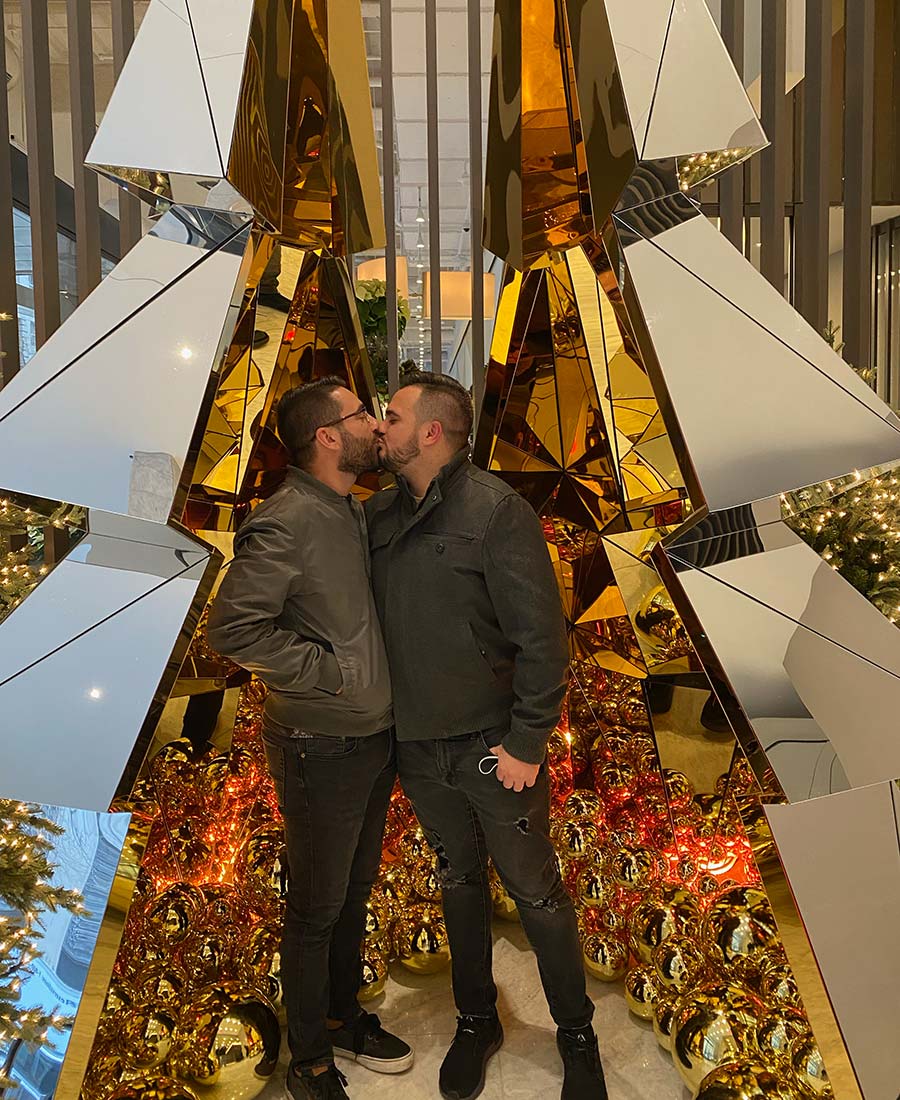 John initially plotted to pop the question in May 2022, after Anthony graduated, but changed his plans in the fall of 2021 after Doug and Fred invited the couple to visit them later that year. “I realized this was my moment,” says John. With eight weeks to go, he bought the plane tickets for the weekend of December 18th, rushed the rings (his friend helped him customize the ring box), and got Anthony’s parents blessing.

The Philly trip: After Fred and Doug picked the couple up from the airport, the group went on a tour of the city. (Anthony had never been here before.) They visited LOVE Park and its sign, where Anthony thought John would propose. “John bent over … to tie his shoelace,” Anthony recalls. “I was disappointed … but we laughed it off and continued on our way.” Their last stop before heading to the Bourse was for cocktails at the Four Seasons bar; Fred said John needed a drink to calm his nerves. “I was anxious the whole day,” says John.

The big moment: John asked his brother to take their photo, and John and Anthony walked in front of the XOXO sign. “Anthony, I love you. I knew I loved you from the first moment I saw you,” John remembers saying. “I know you asked me 10 times before I agreed to go out on our first date. Well, I hope I only have to ask you this once: Will you marry me?” 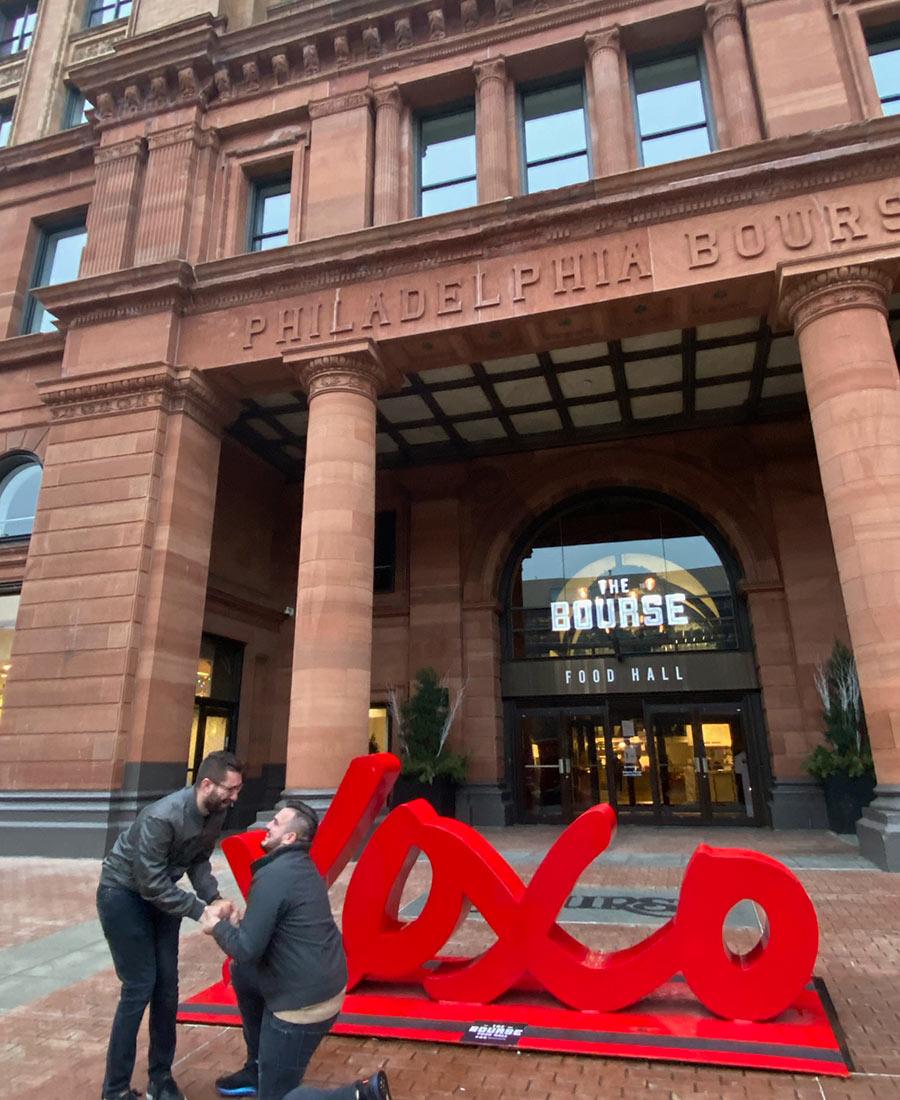 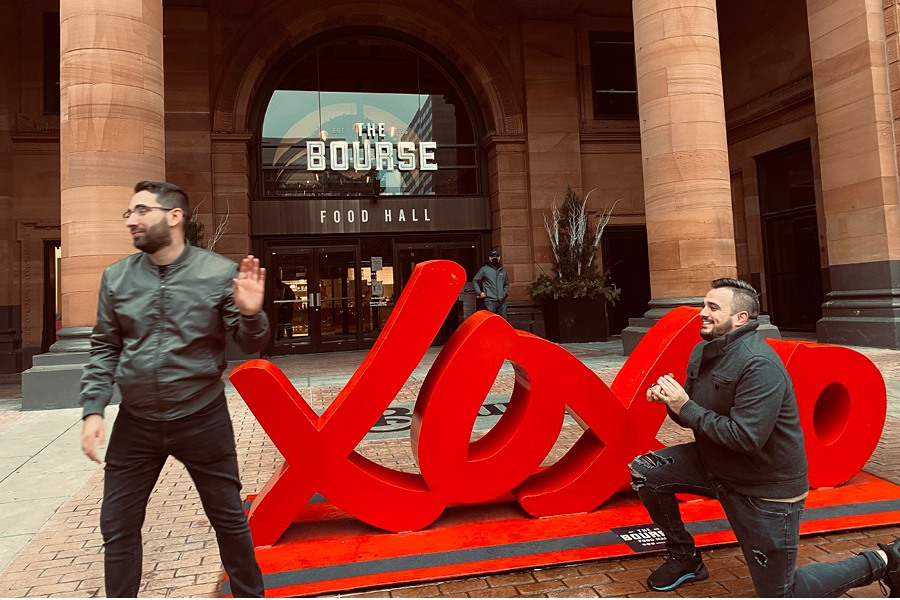 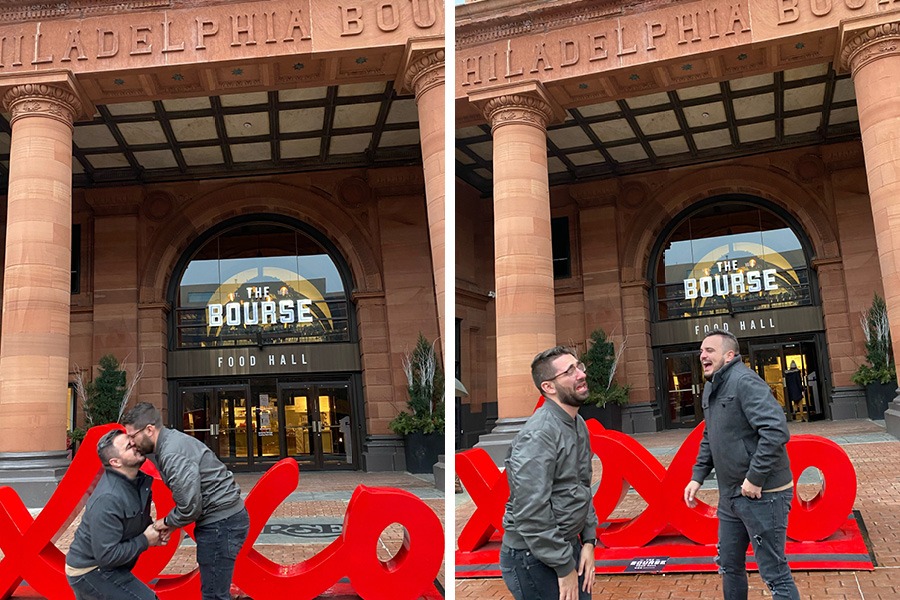 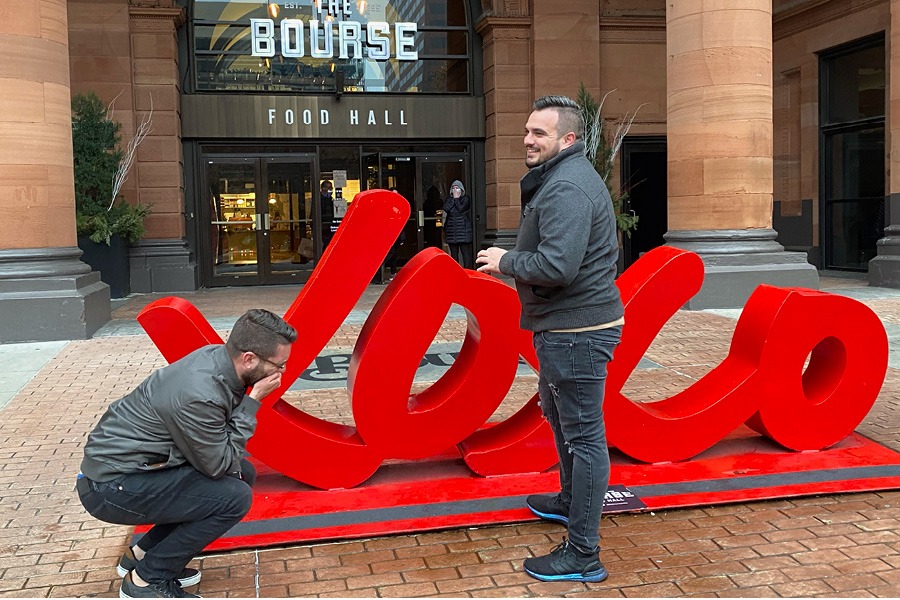 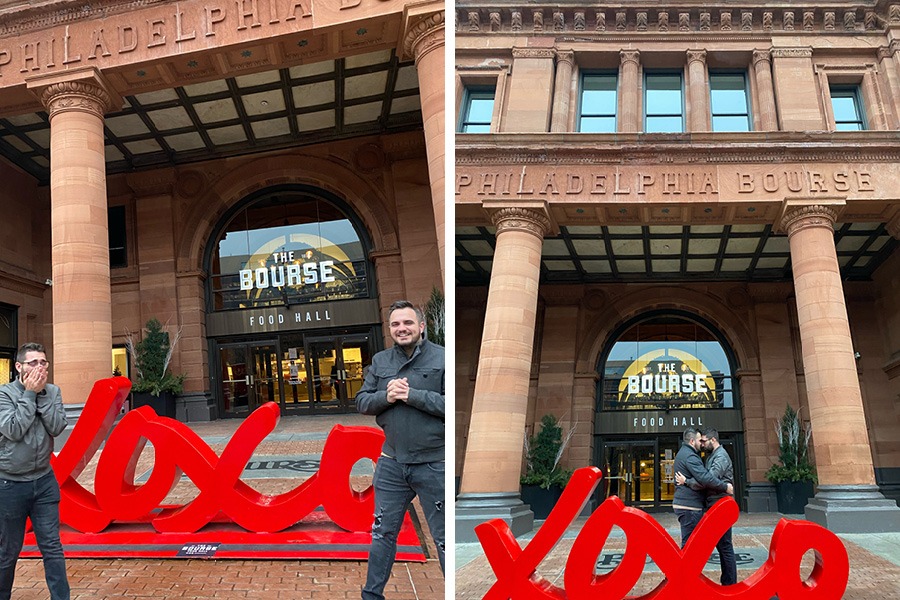 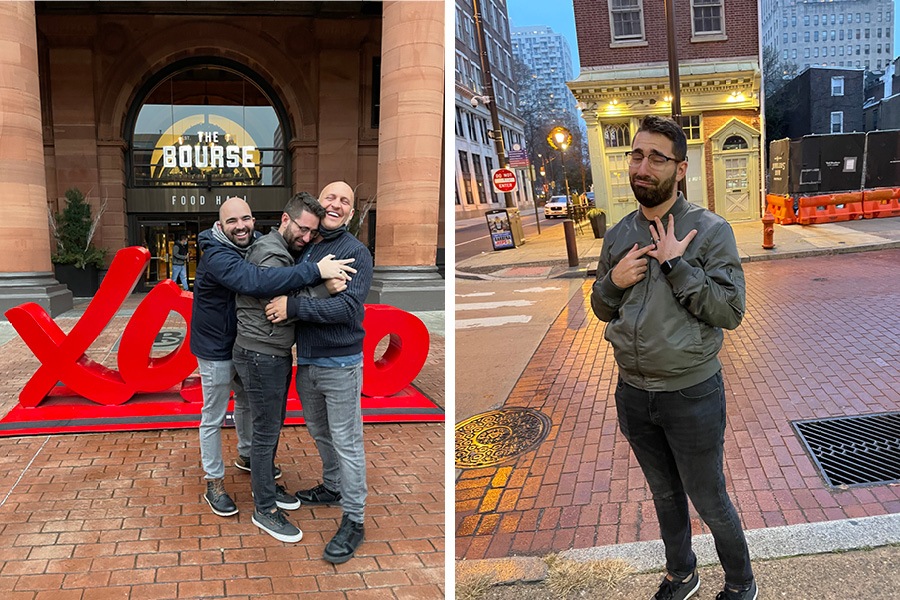 Anthony’s reaction: When John pulled Anthony close, the latter says, he thought his partner was “being his usual cute self.” But when John got down on one knee, Anthony was overwhelmed, walked away, and — well, the rest went viral (which you can see below). “In that moment, every emotion I had took over my body, and I couldn’t control myself,” he says. “For me, it was something truly special that I wasn’t sure I’d ever get to experience but hoped for, one day.”

John’s reaction: “I knew he was going to say yes,” he says. “There was no way I was getting a no that day.” What he expected was “ugly crying” — he wasn’t quite ready for Anthony to say yes in pterodactyl. “When he got down on both knees in front of me,” he says, “I just had to laugh.” He finally had a moment to reflect on it all in the Uber on the way home: “I grew up thinking I would … never be able to publicly show my love to another man, and that I would never be able to find my 100 percent happiness. I looked over at Anthony, grabbed his hand, and said, ‘I love you, fiancé.’”

The post-proposal festivities: After all of that, the duo was exhausted. They got Anthony his first real cheesesteak (from CJs & Ecks) and went back to Fred and Doug’s for a bit. Later, Anthony and John walked around Main Street. “We were freezing, but we enjoyed the time to ourselves,” John says. 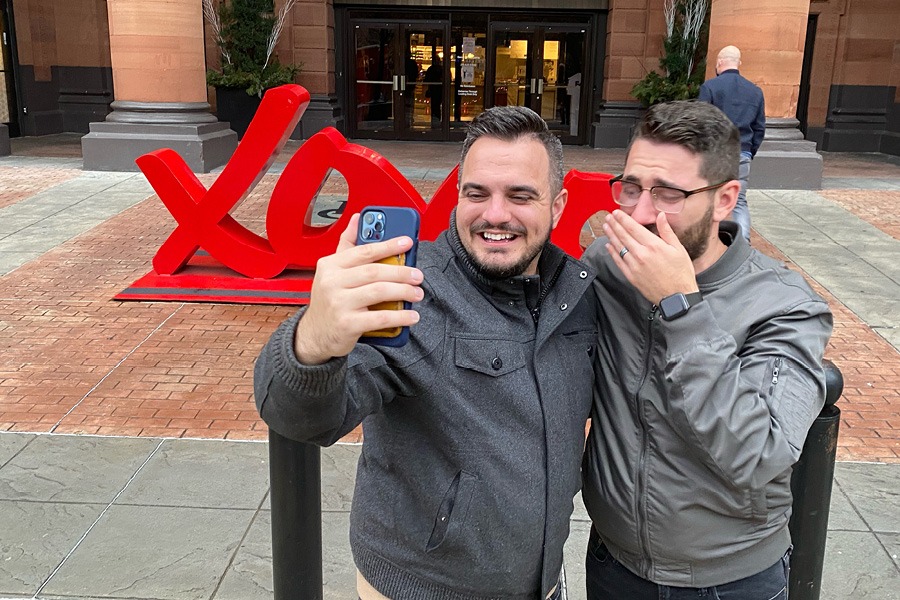 As for the viral result: “The best part about the engagement going viral is the outreach we’ve gotten from the younger queer community,” John says. “We can only imagine what it’s like to see our video through their eyes, because when we were growing up, we would never imagine this.”