Stevie Snyder DM’d Taylor Swift to see if she’d participate in the proposal. When the singer didn’t answer, Plan B was put into place. 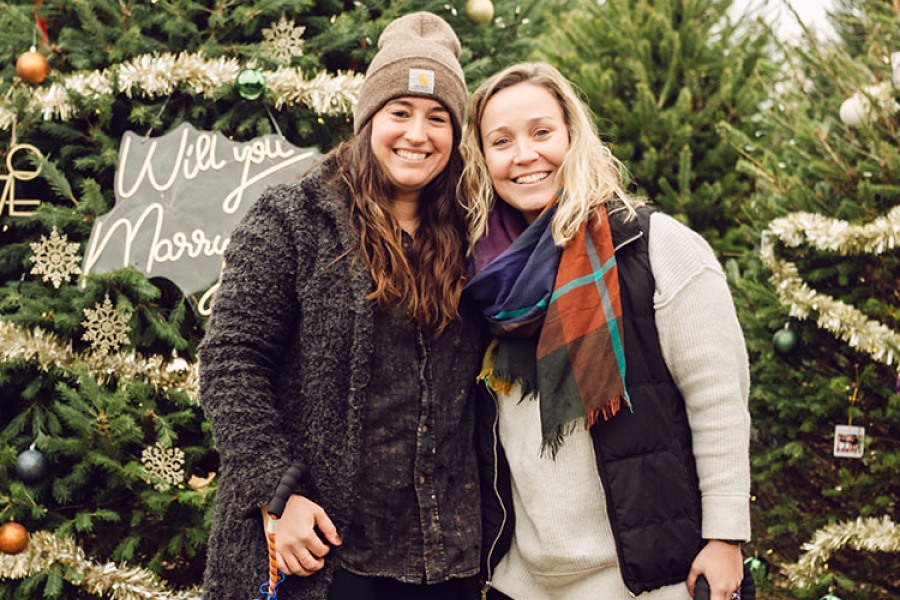 It’s beginning to look a lot like Christmas, and proposals have taken on a particularly festive spin in recent weeks. This New Jersey Christmas tree farm proposal is a prime example. It took place at Exley’s in Sewell and came complete with a decorated tree, Taylor Swift lyrics and plenty of holiday cheer. Heather McBride Photography captured it all on camera, which you can see below. 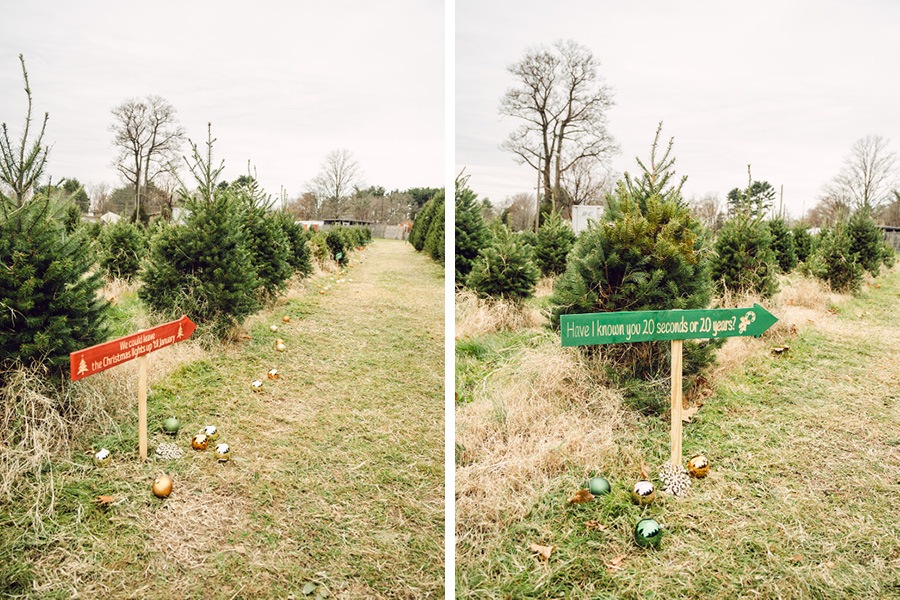 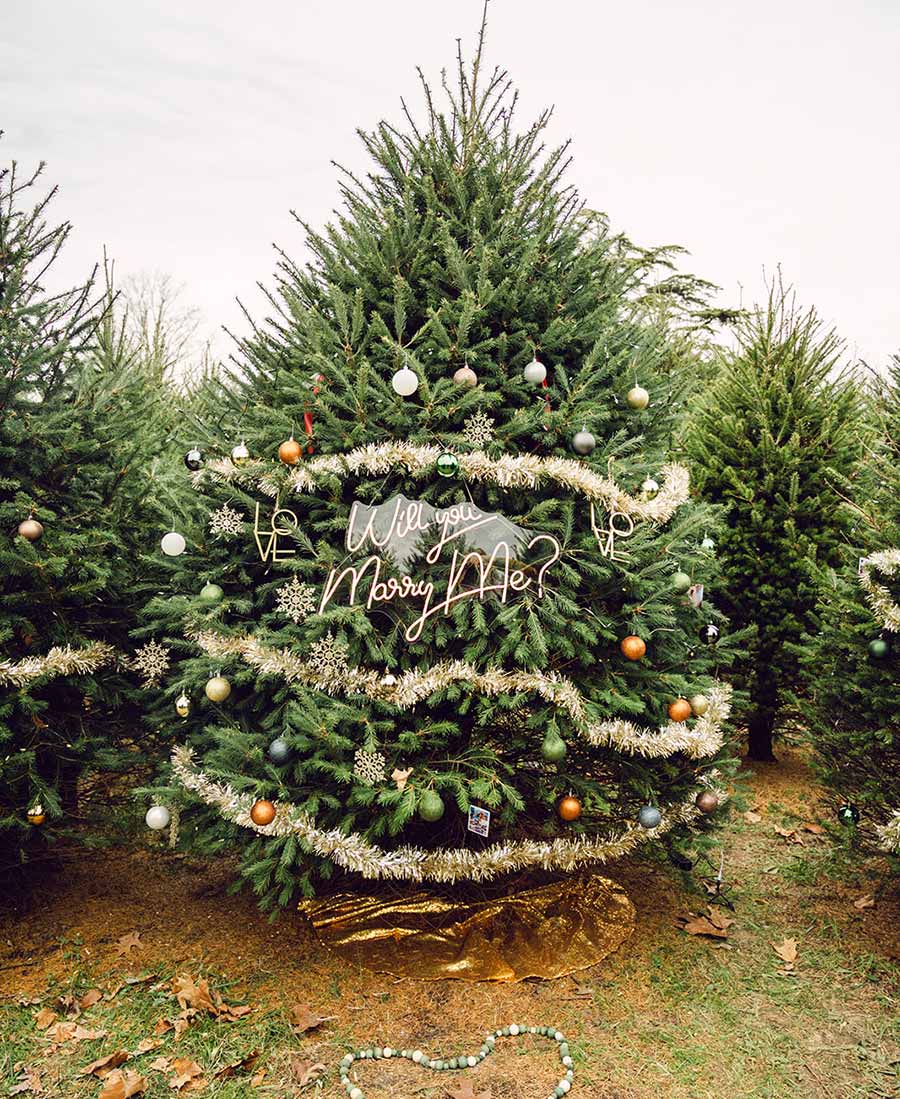 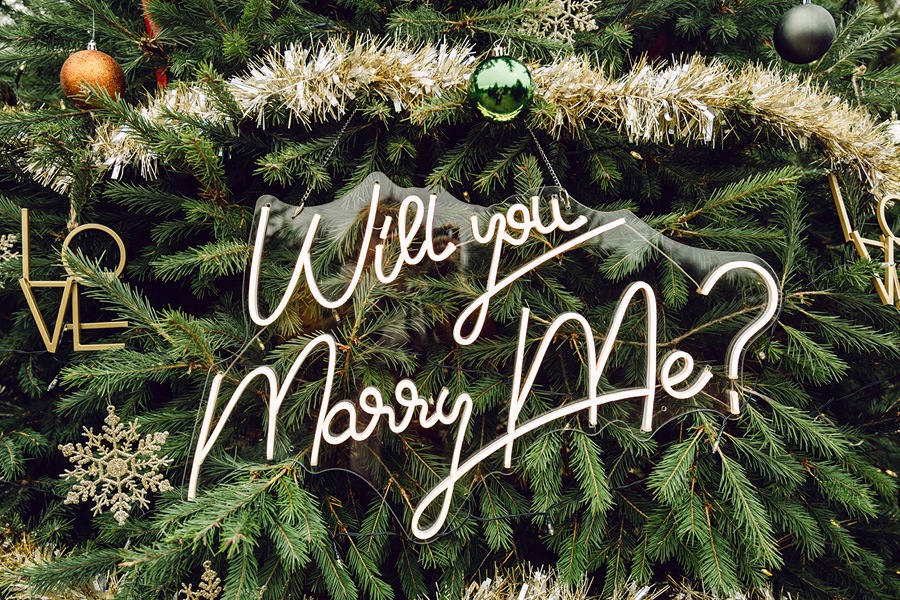 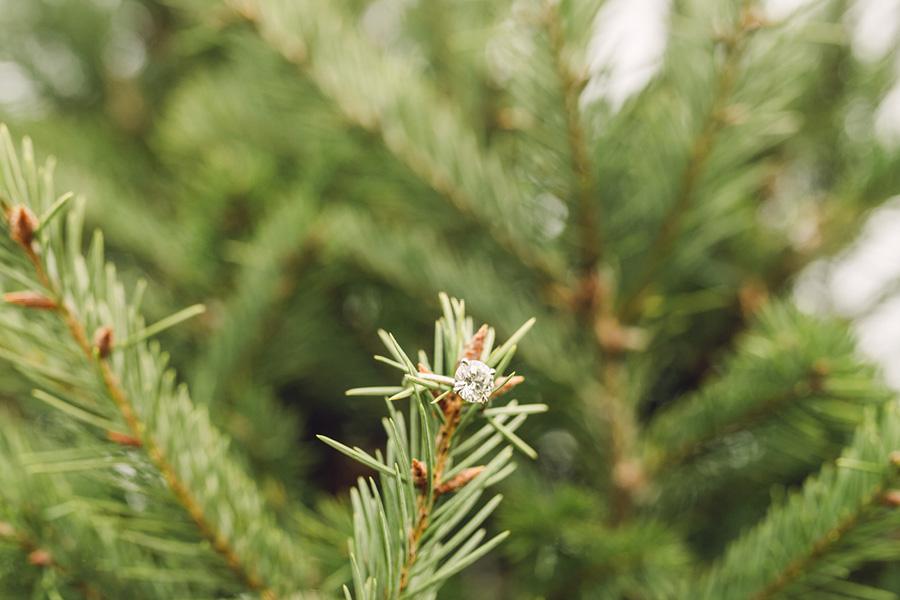 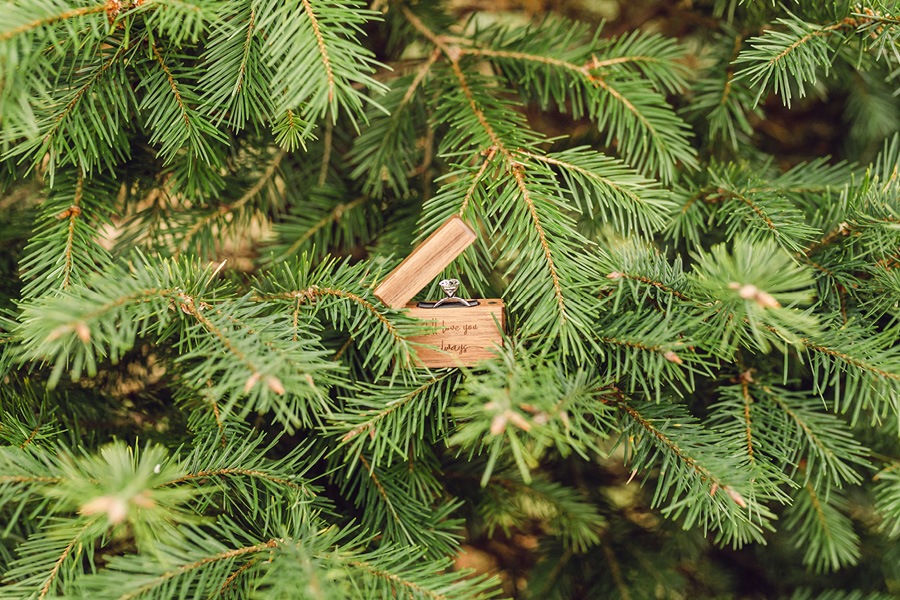 The couple: Casey Hoffmann, a 32-year-old animal health pharmaceutical sales rep for Boehringer Ingelheim, and Stevie Snyder, a 31-year-old producer at Anthropologie, both of Collingswood.

How they met: Casey and Stevie initially met through Stevie’s best friend from high school, who was Casey’s college roommate. Years went by, and Stevie, who was living in L.A. at the time, was heading to Atlanta for six weeks for a job; she knew Casey lived there, so she reached out to get drinks. She wasn’t looking for anything romantic because she lived across the country, but they hit it off. Another coincidental piece to the puzzle: Casey was relocating back to Philadelphia at the end of the six weeks, so Stevie decided to “U-Haul it” with her back to Philly. The couple did long distance for a while and dated for five years before they got engaged.

Casey’s proposal: Stevie always wanted to be proposed to, and Casey always wanted to be the one to propose. “If you ask Casey, she would say I was very persistent about getting engaged, but I knew she just wanted to do it in her own time,” says Stevie. Casey popped the question in September 2021 in Atlanta where they had their first date — with all of their friends on hand to celebrate. Afterward, Casey threw what Stevie calls the best surprise engagement party back at their new house. “After all the planning she put into making me feel so special, I knew I needed to plan something epic for her,” says Stevie. “She claimed that she wanted to be proposed to on the couch in her undies. Hell no was that going to happen!” 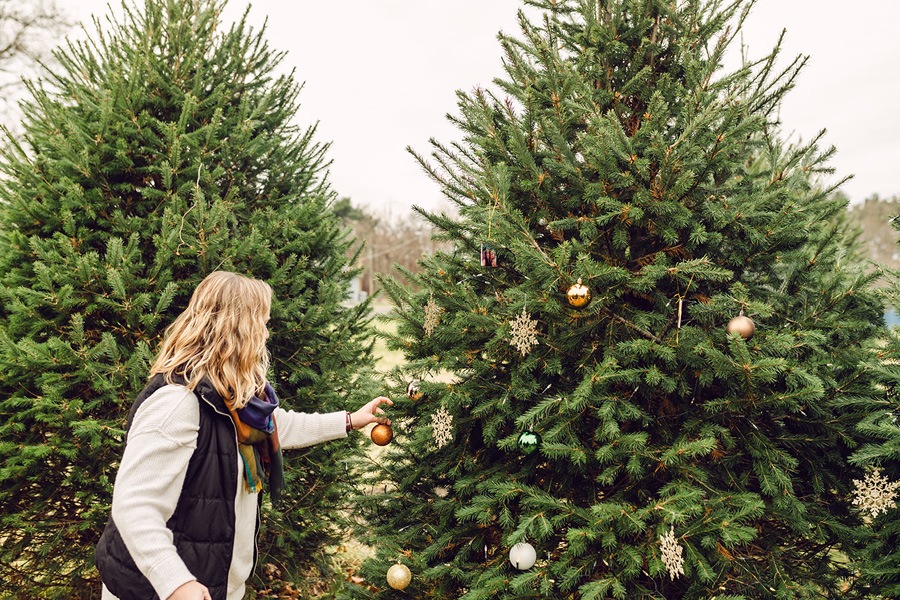 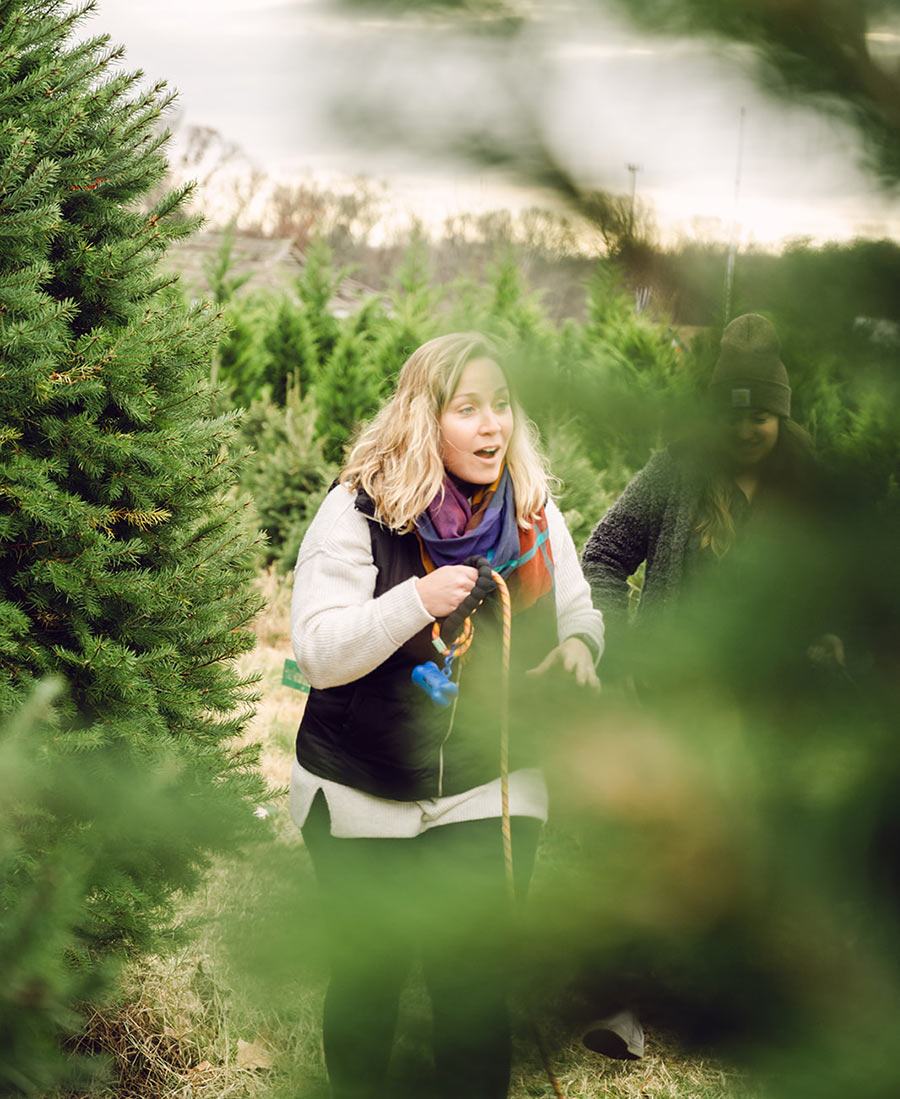 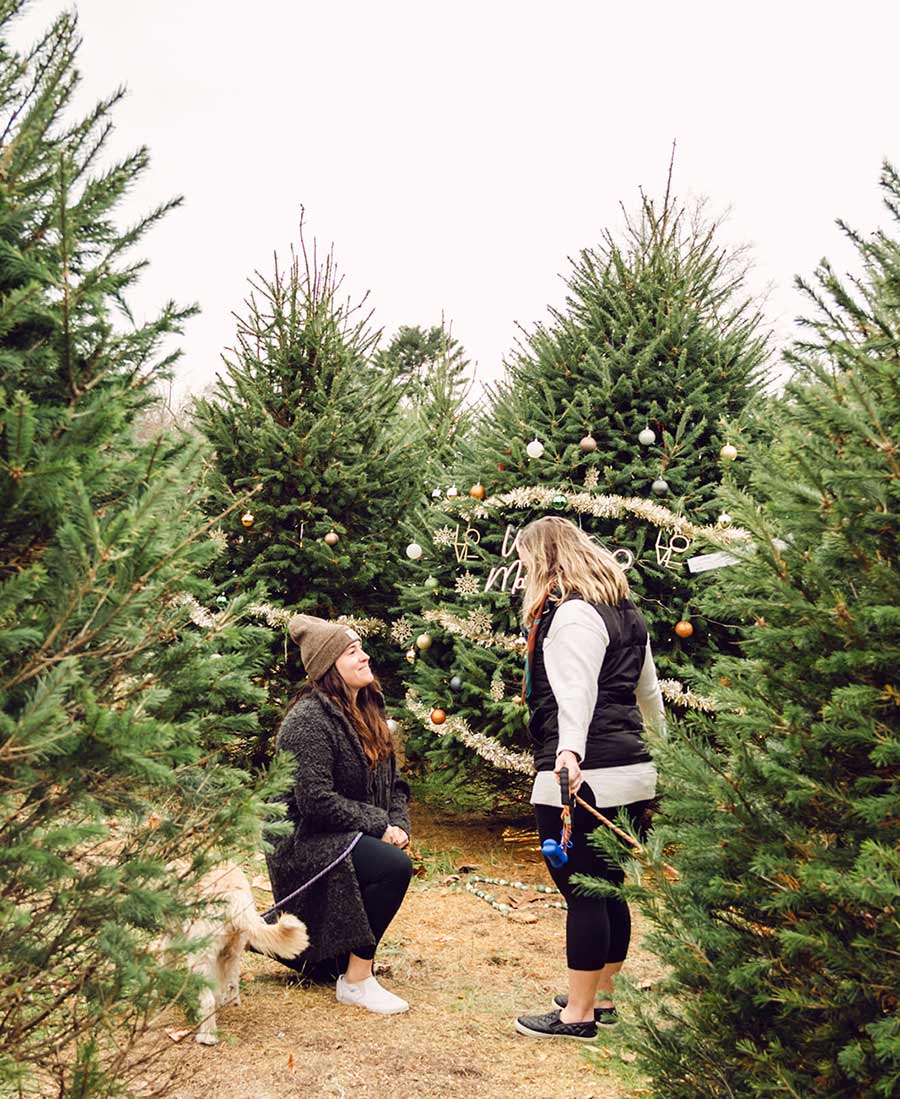 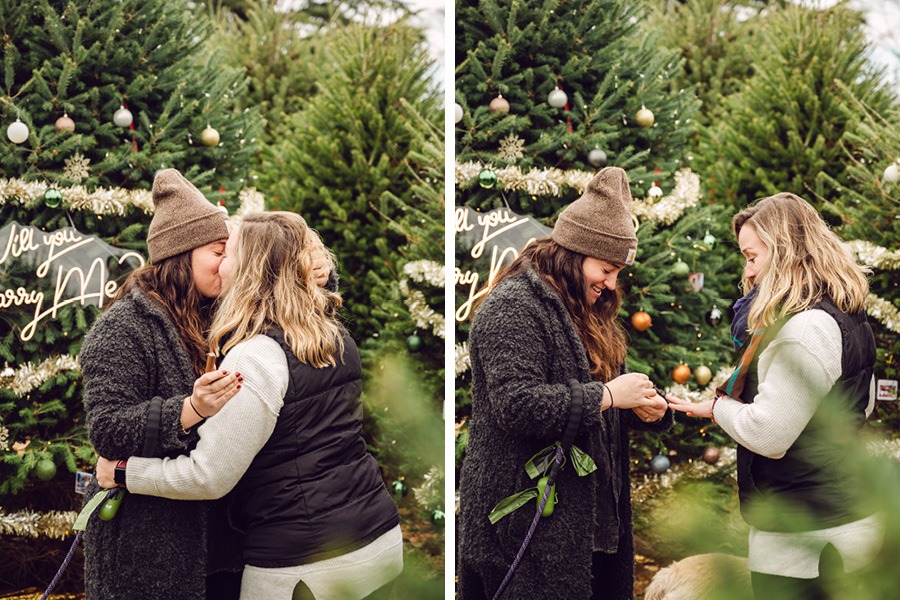 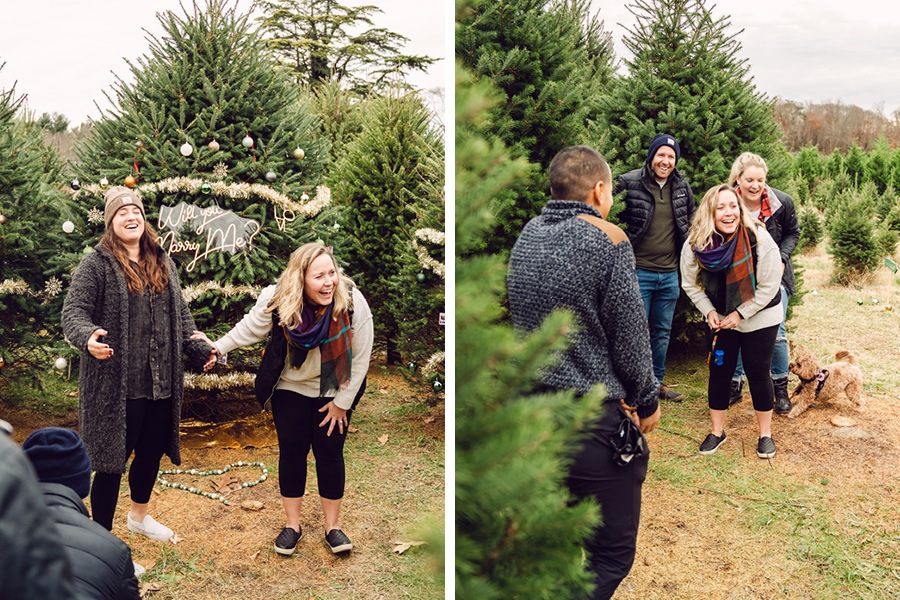 Stevie’s proposal plan: Because Casey’s favorite singer is Taylor Swift, Stevie decided to try to reach out to the star. “This is embarrassing to admit, but I totally DM’d Taylor and asked her to participate in the proposal,” says Stevie. “She obviously didn’t answer so I went with Plan B.” The couple always goes to Exley’s for their Christmas tree, and Stevie thought it would a romantic setting for her to propose back. Stevie suggested they should go cut down their tree in early December, and Casey agreed. “Perfect — it was all set,” says Stevie.

Well, not so fast: As the date got closer, Casey kept trying to make plans and moved the tree-cutting to a different day all together. First Casey signed them up for a 5K in Haddonfield — Stevie didn’t even know until she got an email with the race registration. Then their friends invited them to a drag brunch in Philly. “Casey had it all planned out: We’d do the 5K and then go to brunch,” recalls Stevie. “At this point I knew that she had no idea. I had to text our friends and ask them to tell Casey the tickets to the brunch were sold out.”

The decor prep: Stevie arranged for her best friends to decorate a tree out in the field with lights, ornaments and a neon “Will You Marry Me?” sign. (She had scouted the farm ahead of time and sent a map to her friends on the tree location.) They also set up signs along the pathway with lyrics from “Lover” by Taylor Swift. “I had to incorporate her somehow,” says Stevie.

The big day: The couple spent the morning finishing the 5K — yep, they still did it — went home to clean up then headed to the tree farm. Stevie and Casey, and their dogs Penny and Cali, began walking along the path lined with T-Swift lyrics. Casey was, of course, thrilled. “It’s Taylor Swift,” she exclaimed as she read them. Stevie played dumb: “Why do I recognize these lyrics?” she recalls saying. They approached the clearing where the tree was and saw the “Will You Marry Me?” sign.  Casey, still not aware of what was happening, thought it was a proposal — for someone else. “No, no, this is not for us,” she said to photographer Heather McBride when she saw her. 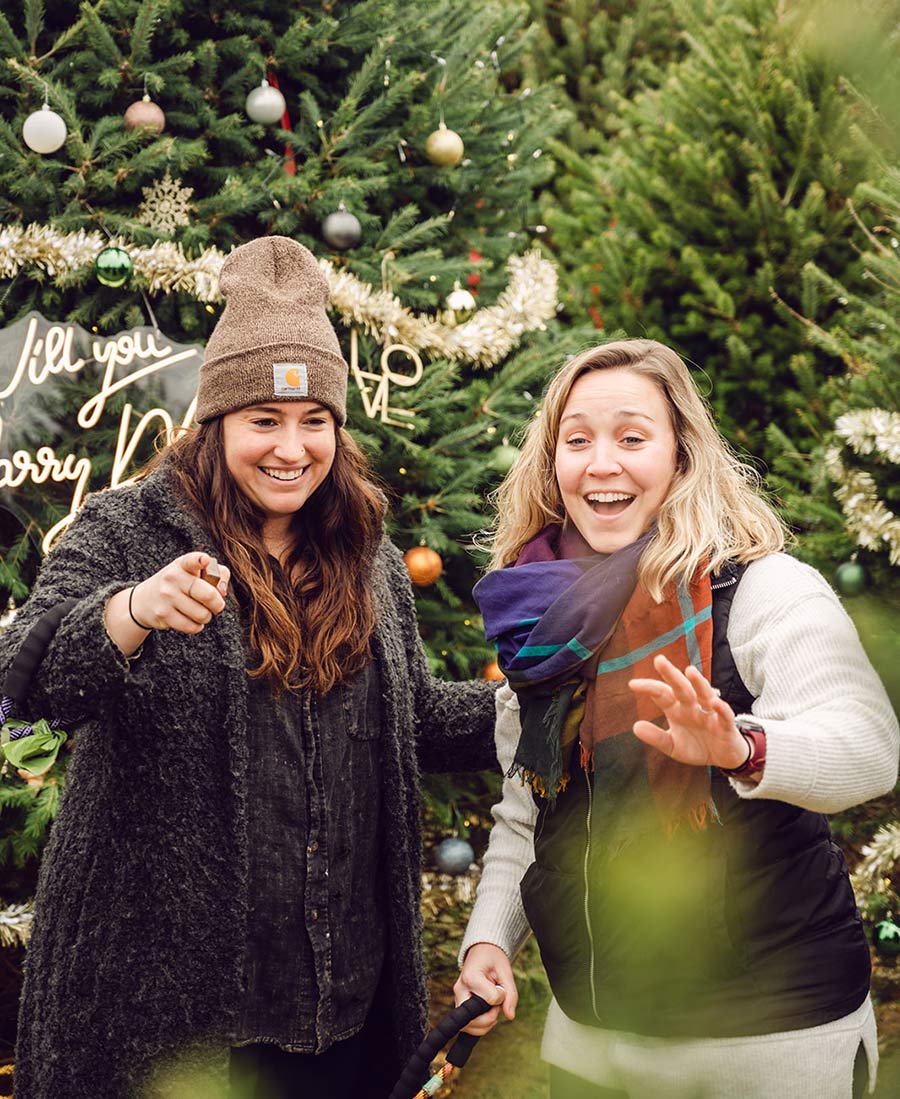 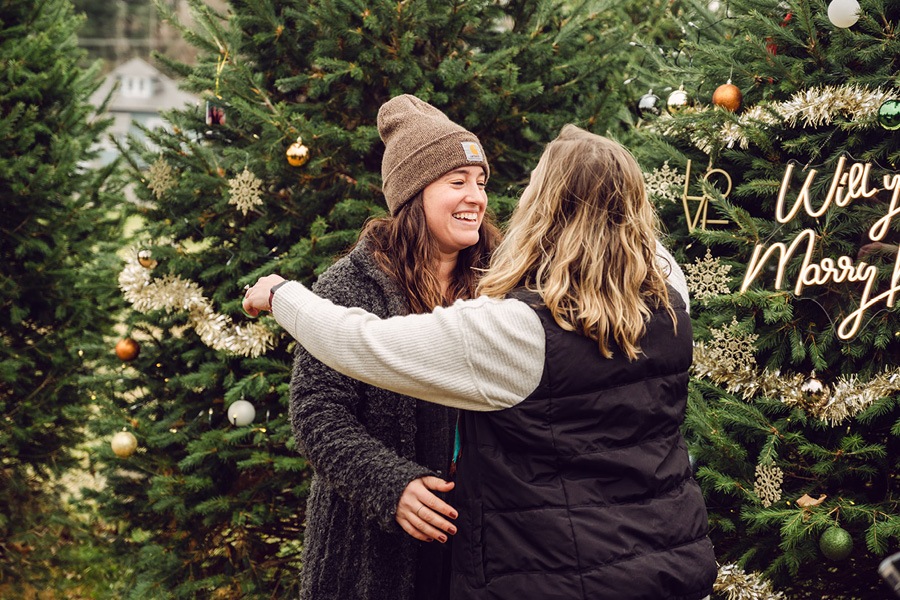 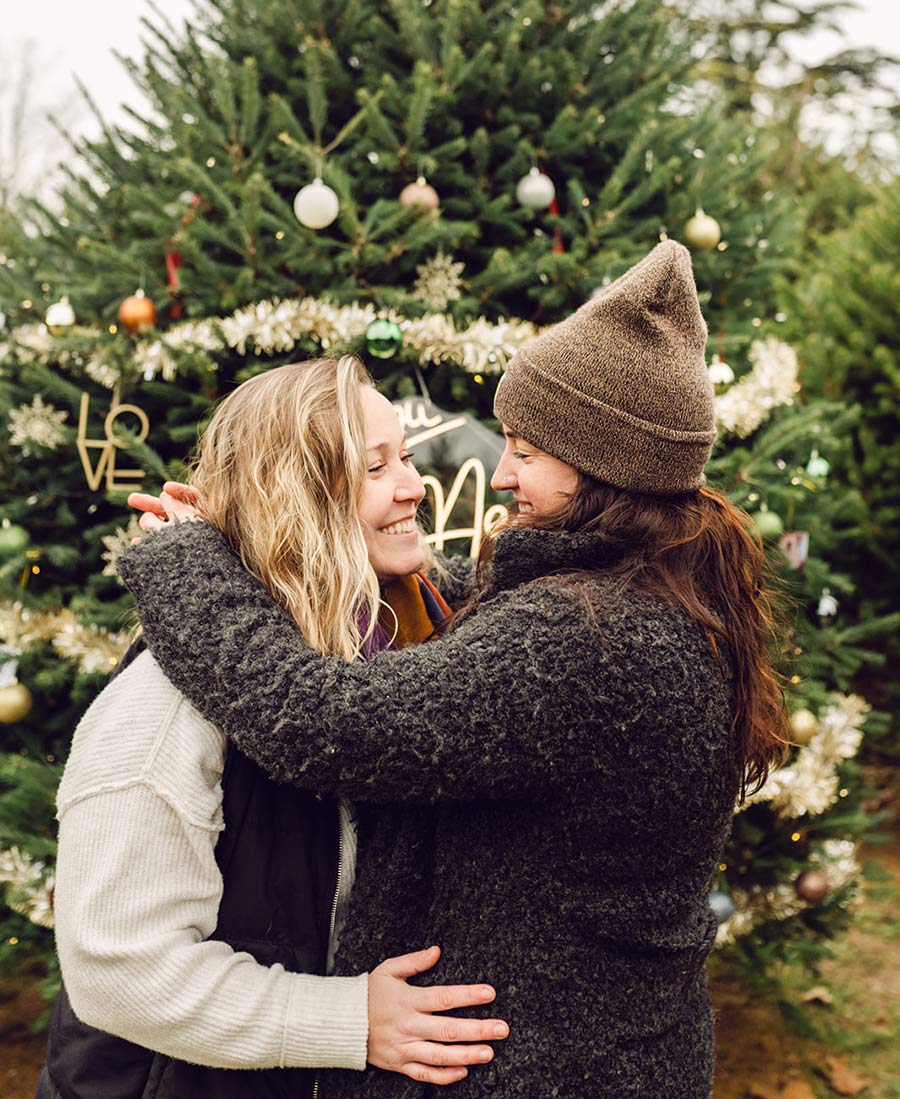 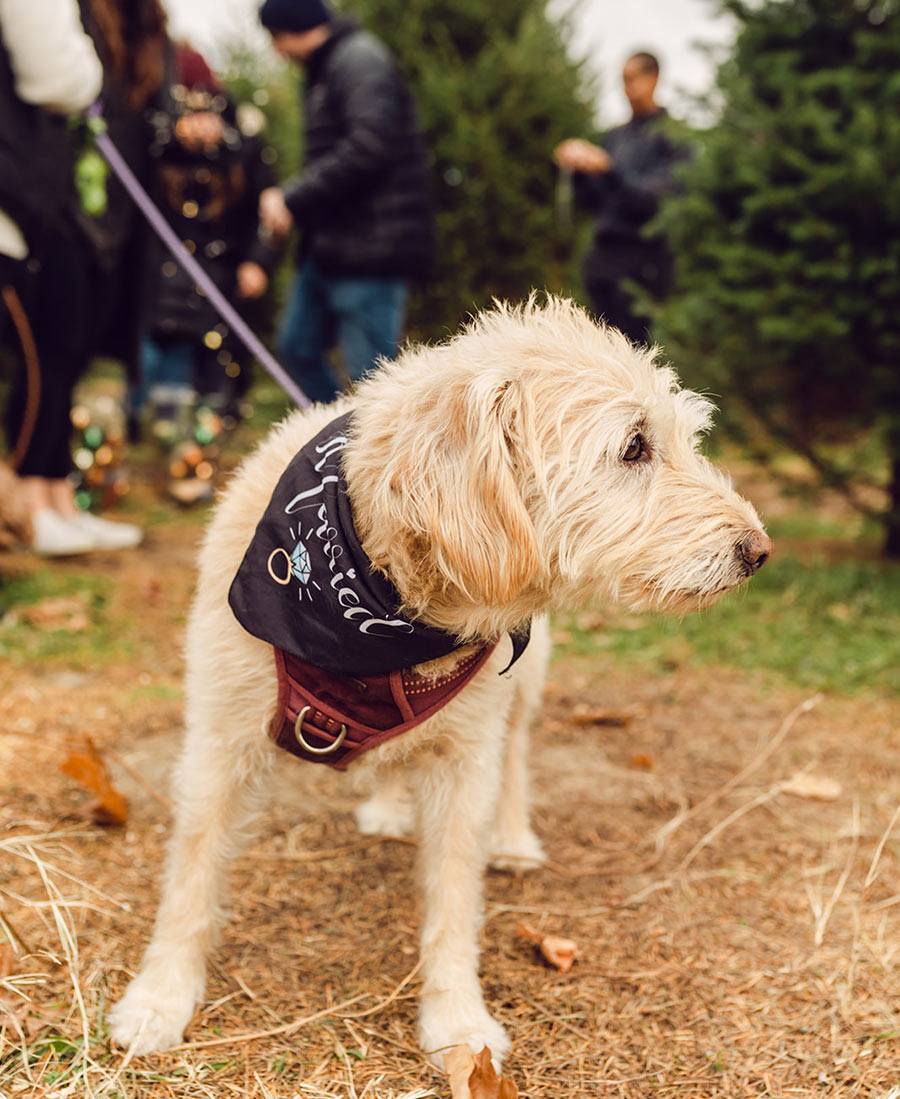 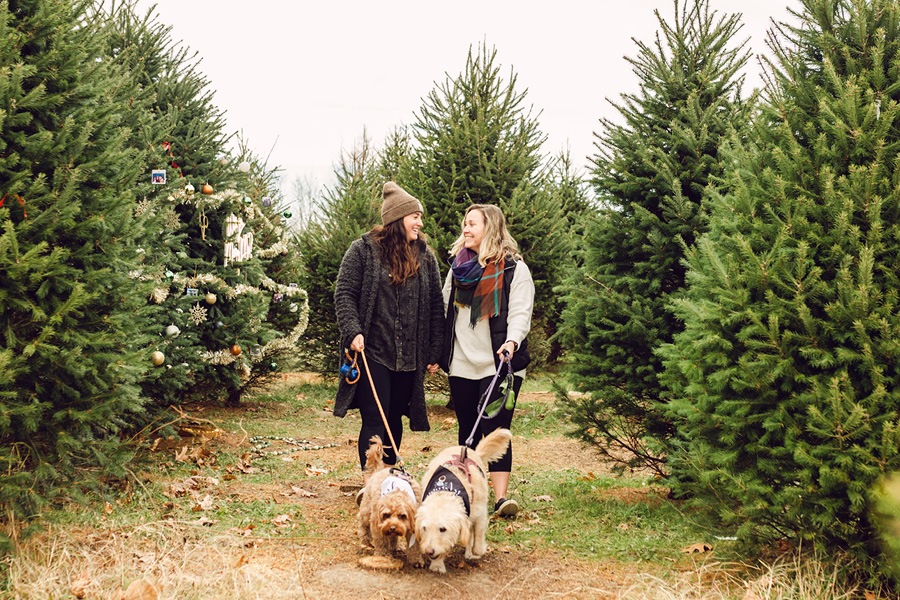 Stevie ultimately had to grab her hand and explain that it was, indeed, for them. “If anyone knows Casey, she is not a girly girly, but her girly yelps and screams made me truly believe she had no idea,” says Stevie. Before she could even pop the question, Casey said: “You don’t even have to ask, of course.” Once the ring was on all of their friends came out and the celebration began.

Casey’s reaction: “What I thought was going to be an ordinary Christmas tree-cutting experience turned into one of the best days of my life,” she says, admitting that she was completely clueless — and completely taken by the proposal, even if she didn’t think it was for her. “I even insisted Stevie take a picture of one of the Taylor Swift signs because this was the sweetest thing I have ever seen,” she says. “Never in my wildest dreams did I think this production was for me!” It’s a story, she says, they’ll tell their children someday.

Stevie’s reaction: “Everyone should experience proposing to someone because, man, is it stressful. I thought I wouldn’t be nervous, but I sure as hell was,” she says.

The post-proposal festivities: Stevie had one more surprise up her sleeve: She told Casey they were going to brunch with their pals who were at the proposal — but actually planned a surprise party with their friends and family at Kings Road Brewing. Casey, once again, had no idea. 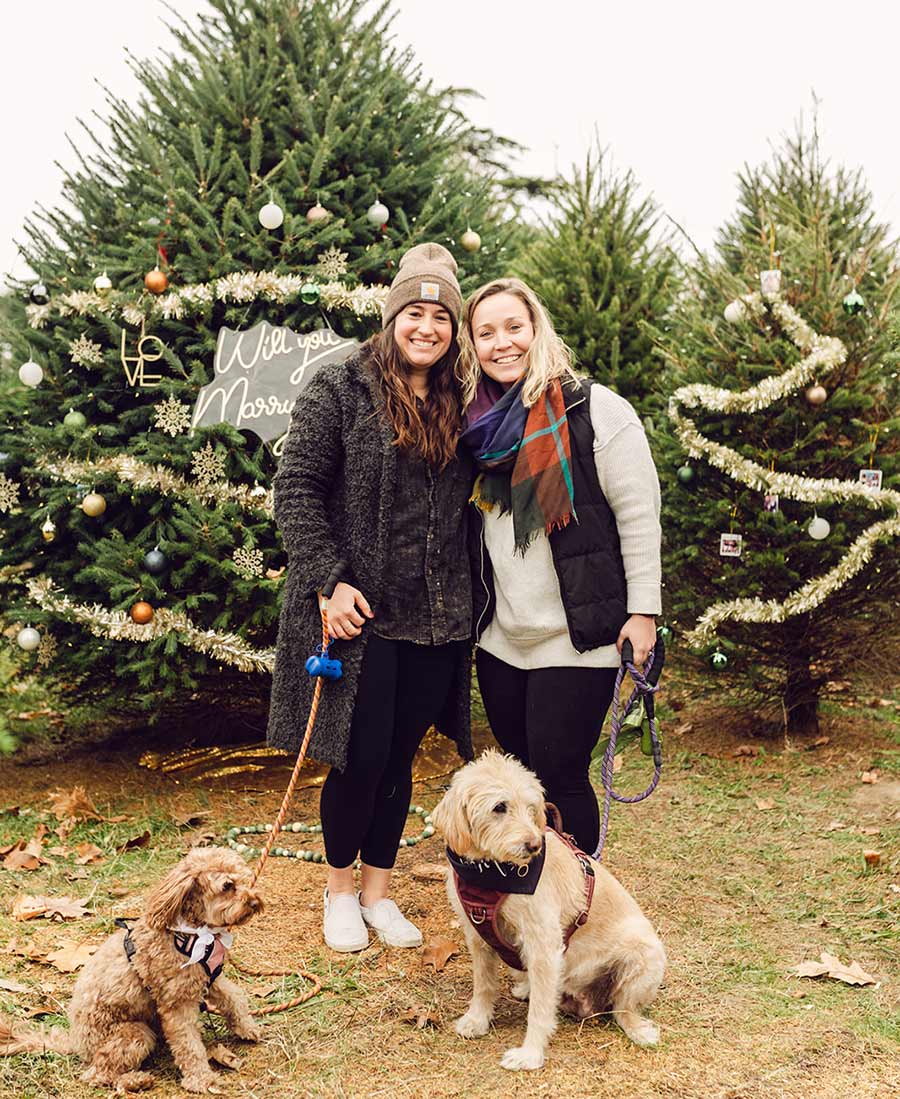 The wedding plans: The couple set the date for October 8th, 2022, at Globe Dye Works.