The South Street Bridge proposal was a Plan B. 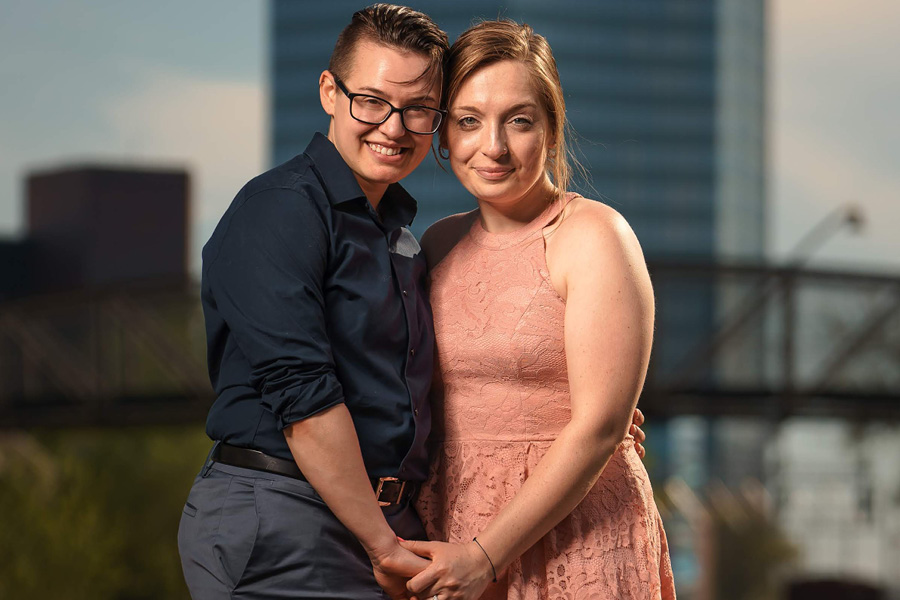 Many couples experience life-changing moments — good and bad — that solidify their relationships and bring them even closer. Maybe it’s something as simple and sweet as buying a Ring Pop on a first date. Or it could be something deeper, like taking care of your partner after a car accident, or navigating love amid the pandemic. For this Grad Hospital couple, all three of these took place before their South Street Bridge proposal, a life-changing moment on its own. See the special day, captured by Glen Abolu Photography, here. 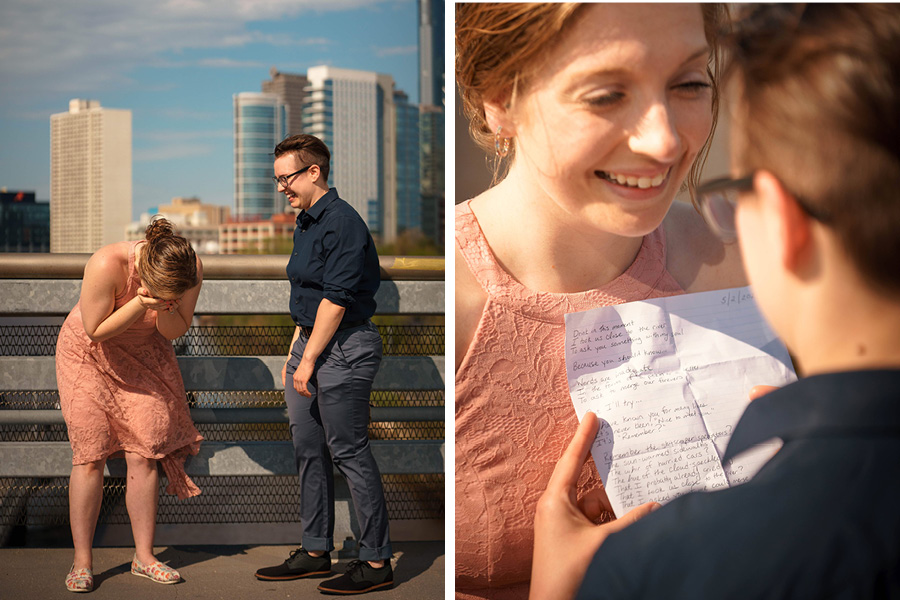 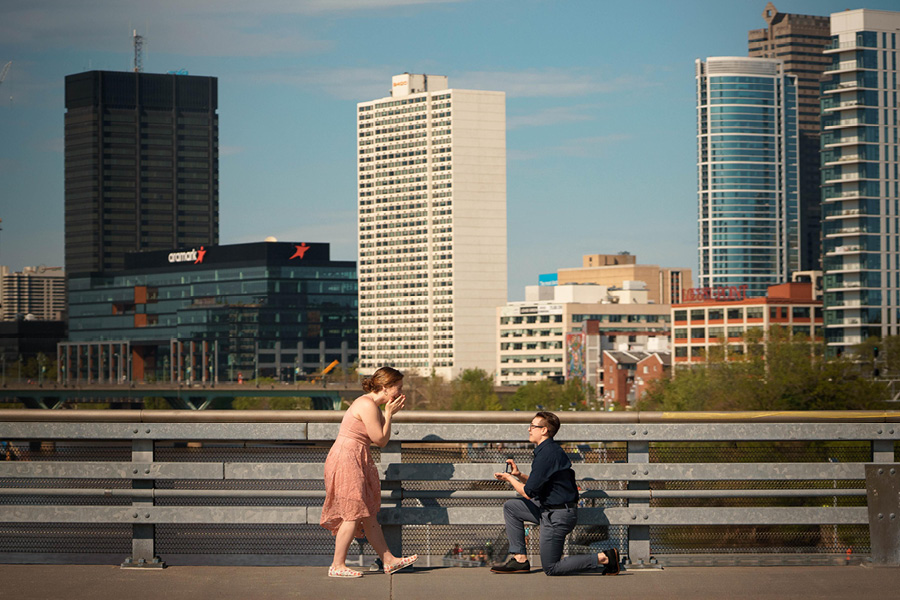 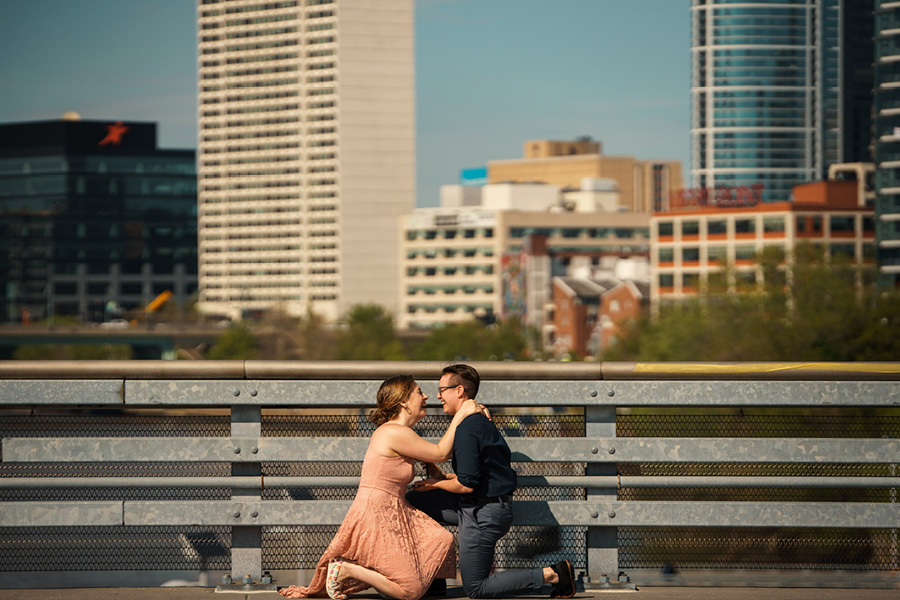 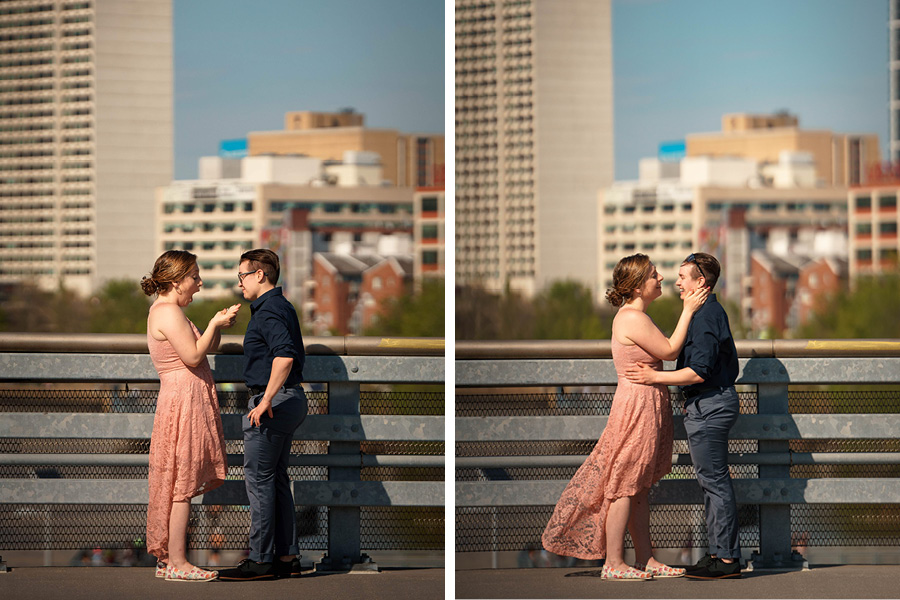 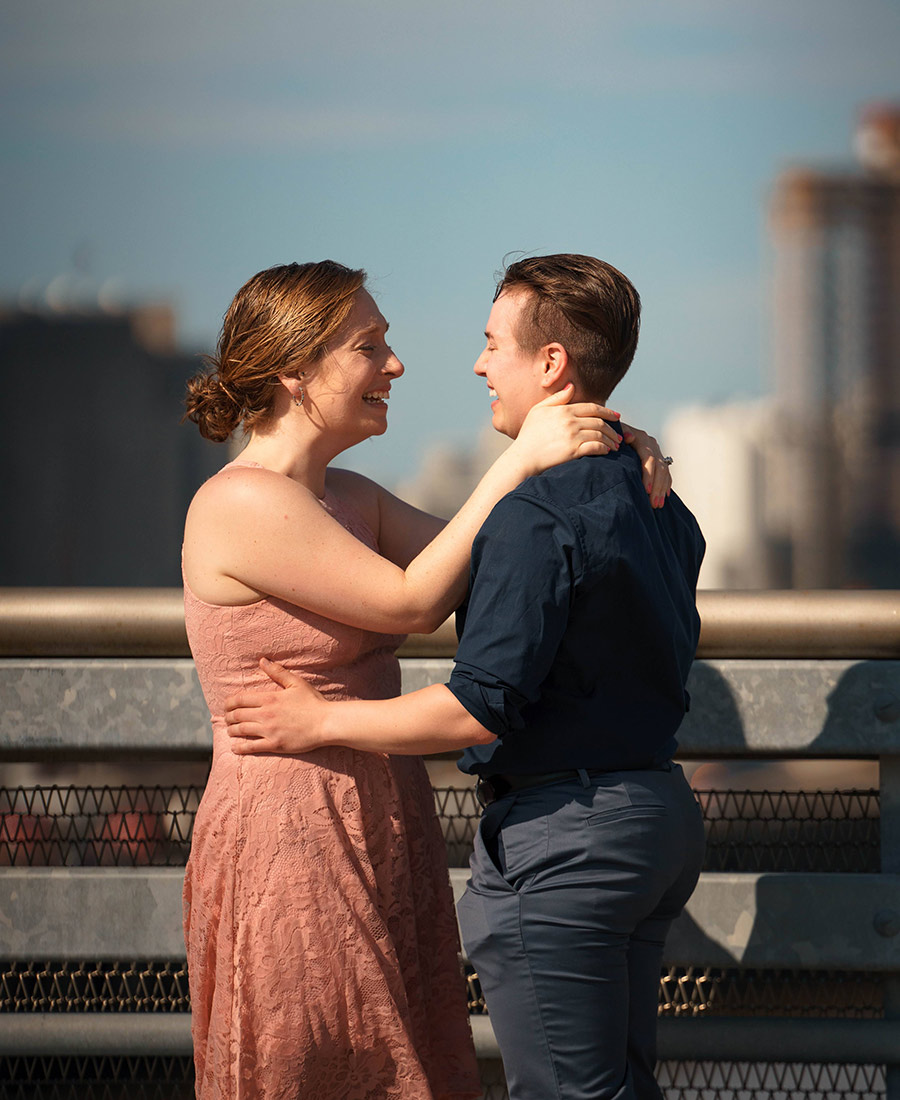 The couple: Julia Tasca and Gabrielle (Elle) Gordon, both 28, of Grad Hospital

How they met: Depending on whom you ask, they either met on Tinder or by catching each other’s eye across Spruce Street Harbor Park while watching a square-dance competition (which is actually how their first date ended). Julia loves that they met on Tinder. “I feel like I found a needle in a haystack,” says the PhD student in the biochemistry and molecular biophysics graduate group at Penn. “I asked her if she wanted to meet in public for coffee after exchanging about five messages.” Elle, a licensed social worker at the Hospital of the University of Pennsylvania, laughed at Julia’s corny dad jokes. And she made a “joke” of her own: “You’re the one! I’m a ring size seven.” Julia bought her a Ring Pop on their first date.

How long they dated: The couple was together for about a year and a half before getting engaged, but they note it felt like 10 years: “We went through a lot together during that time,” Elle says. Six months into their relationship, Elle got into a bad car accident, but Julia was there for her. She met Elle at the hospital, called Elle’s mother, and took care of her, going with her to physical therapy and rehab, cooking dinner, and generally keeping a positive outlook. “I owe so much of my healing to her,” says Elle. 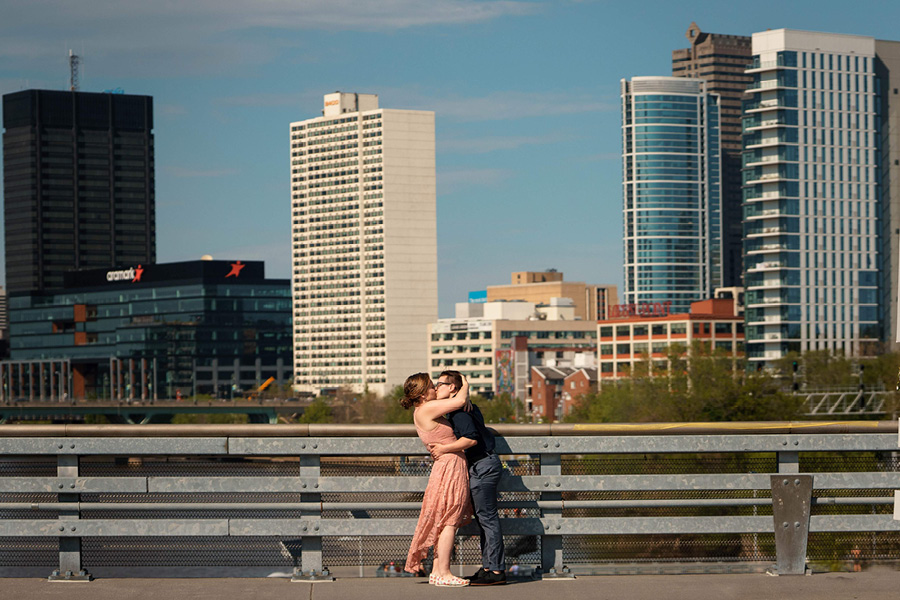 The proposal: The big moment came in May 2020, amid the pandemic. “We’d both been working from home, isolating, watching too much Netflix and eating too much granola,” says Elle. After being cooped up all week, Elle wanted to go on a long walk and have a picnic with their dog, Frank. The couple went out on a lazy, leisurely stroll before Julia insisted on returning home so Elle could change into one of three new dresses Julia had purchased for her. They then headed over to the South Street Bridge overlooking the city. Julia had arranged for photographer Glen Abolu to be on hand to capture the big moment: She read Elle a poem she’d written and got down on one knee. Julia barely got the words out before Elle said yes. They then took their engagement photos around their neighborhood.

Elle’s reaction: She later learned that this was Julia’s Plan B due to COVID-19. Her first plan had involved visiting a lot of the places they’d been and seeing people they love, neither of which was feasible. The proposal helped lift Elle’s spirits during a difficult time; the couple had to cancel a trip to Italy in May, and Elle was “so bummed.” She had a feeling Julia would propose around the time of the trip, though she didn’t know when. “She made sure every detail was perfect,” says Elle. “Every family member had been spoken to weeks in advance. Every friend was on board, silently cheering from near and far all day long, unbeknownst to me.” 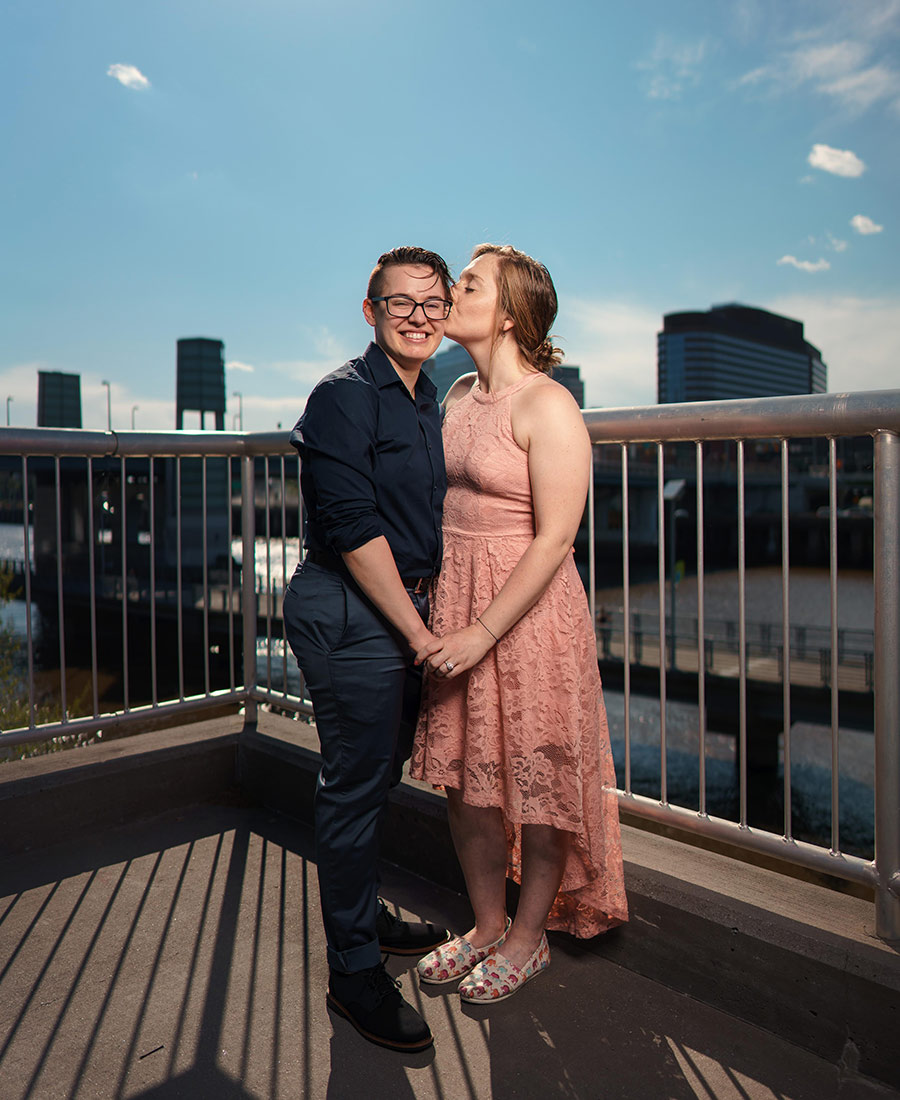 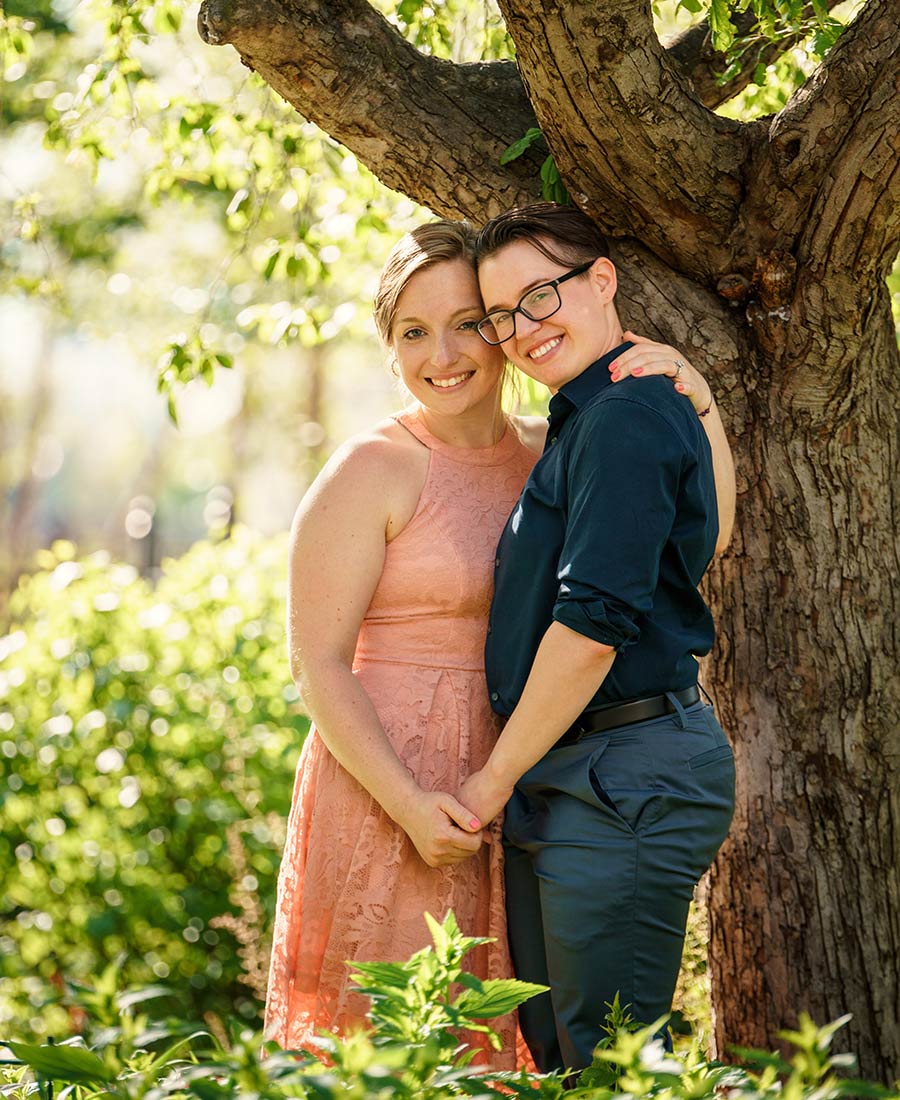 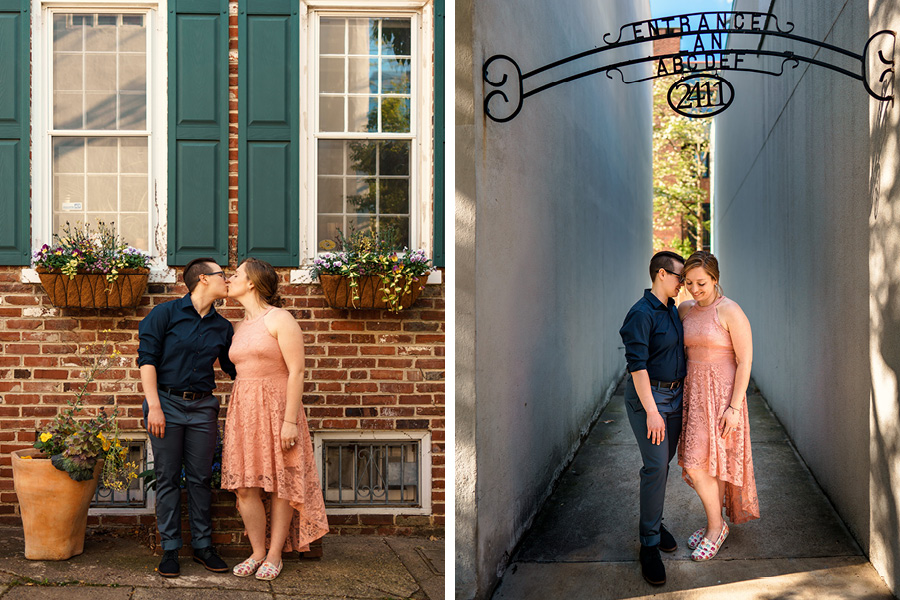 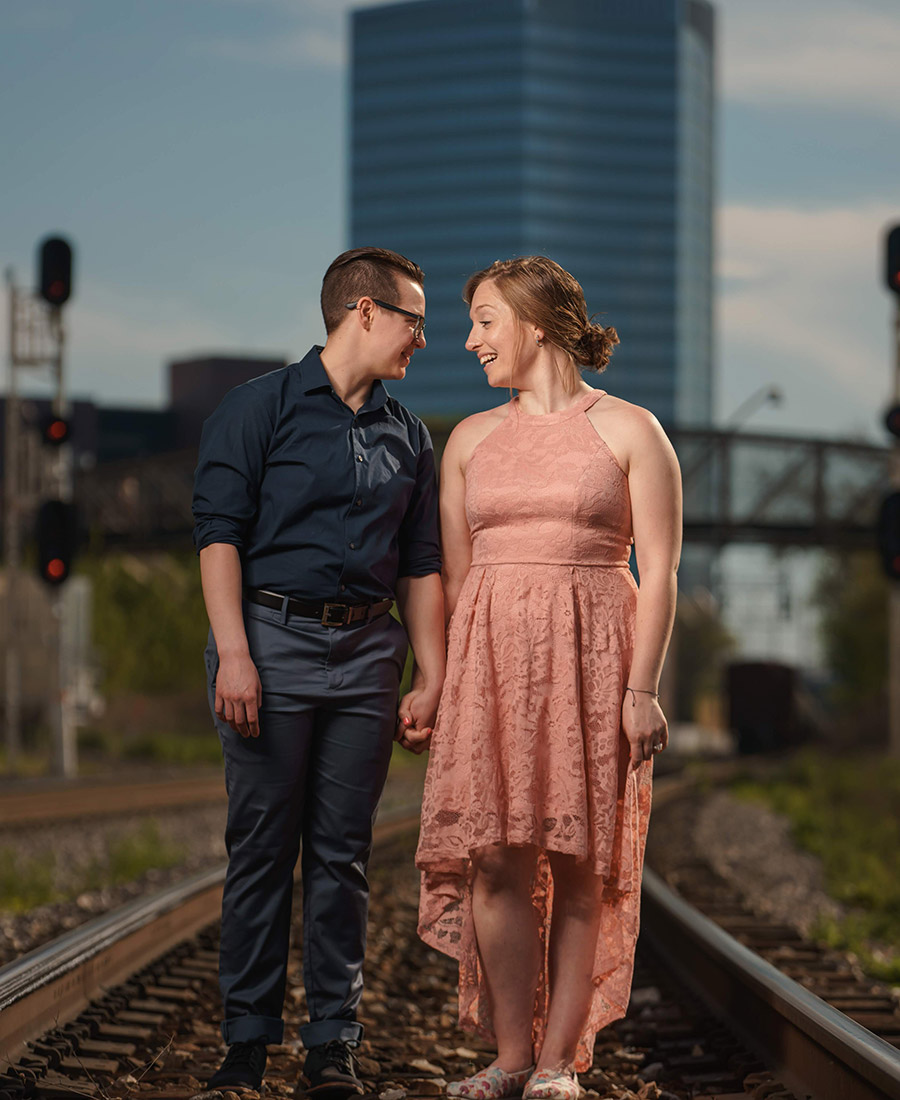 The post-proposal moment: They ordered dinner from Crybaby Pasta, their favorite Italian restaurant, and Julia played a video she had recorded of Elle’s family and friends saying congratulations and sending them love. (Frank played a part, too.) They spent the night calling and FaceTiming everyone, and Julia fell asleep while Elle was chatting with her best friend at the end of the evening. 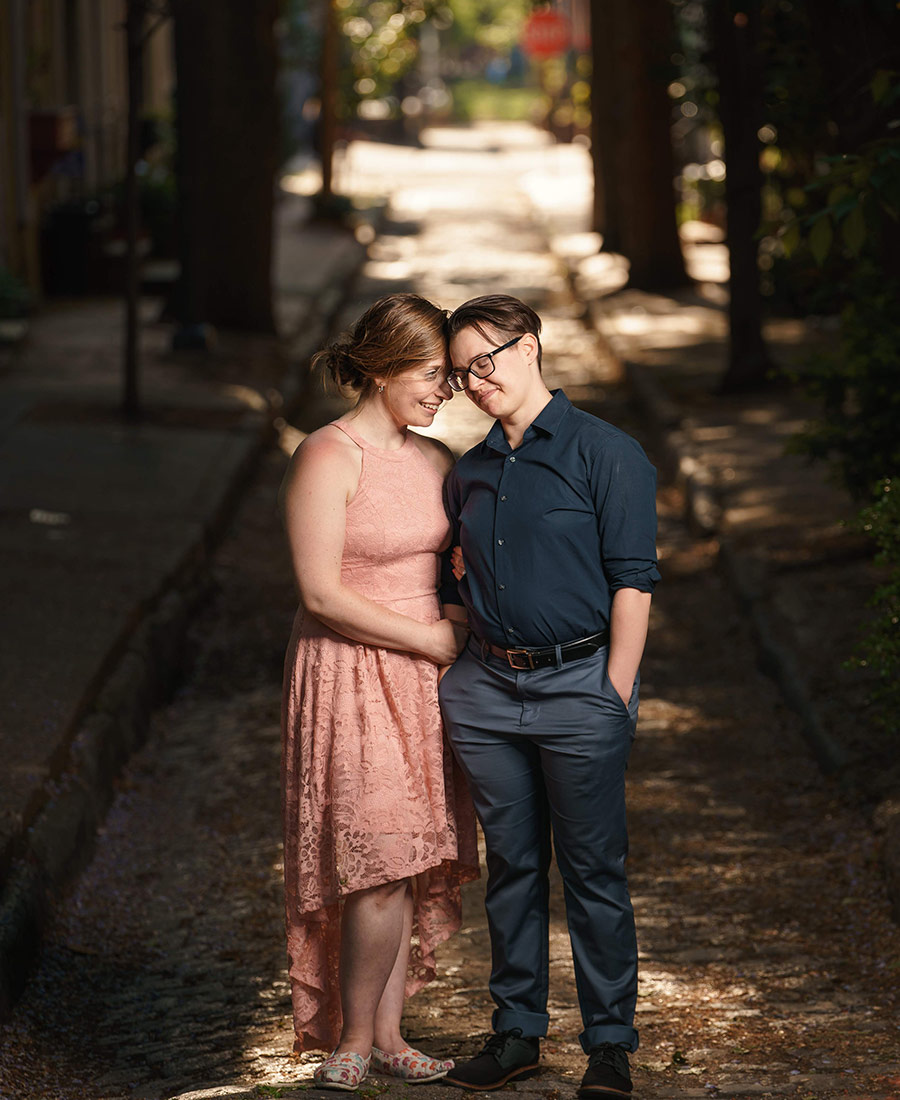 The second proposal: Shortly thereafter, Elle proposed to Julia, too. “It was important to me to be the one to do the big proposal first, but I had expressed wanting to be proposed to afterward as well,” says Julia. Elle surprised her with a weekend in Stone Harbor — exactly one year before their planned wedding date this fall. (The couple hopes to be married at Water Works by Cescaphe.) They arrived on the beach at sunset and took a walk, and then Elle popped her question. Dinner, massages and more relaxation followed: “We’re now officially official!” says Elle.