While the event was open to all duos, it was focused on the LGBTQIA+ community. 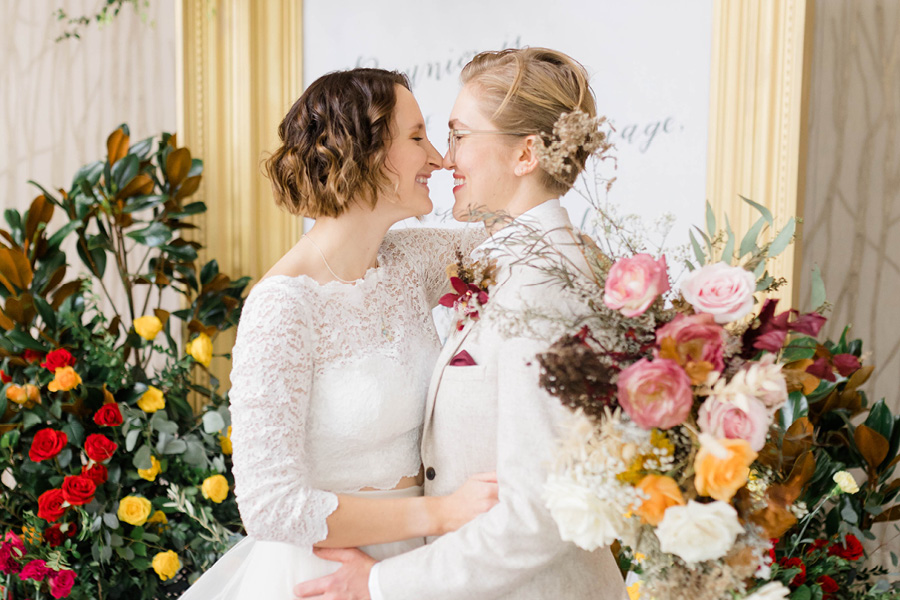 Carolyn Stevens and Alexa Woodward were married during the free wedding event at Pomme in late November. Photo by Jess Palatucci; all personal florals by Vine + Oak and donated by DVFlora

On November 29th, the Sunday after Thanksgiving, six couples said “I do” during a free wedding event at Pomme in Radnor — and some 25 Philly-area vendors made it happen. (Click here for the full list.) Dubbed the Equal Dignity Pop-Up Nuptials, the civil ceremony offering was open to all duos, though it was focused on the LGBTQIA+ community and those concerned about their marital rights. In the wake of the COVID-19 pandemic, it took on another layer. 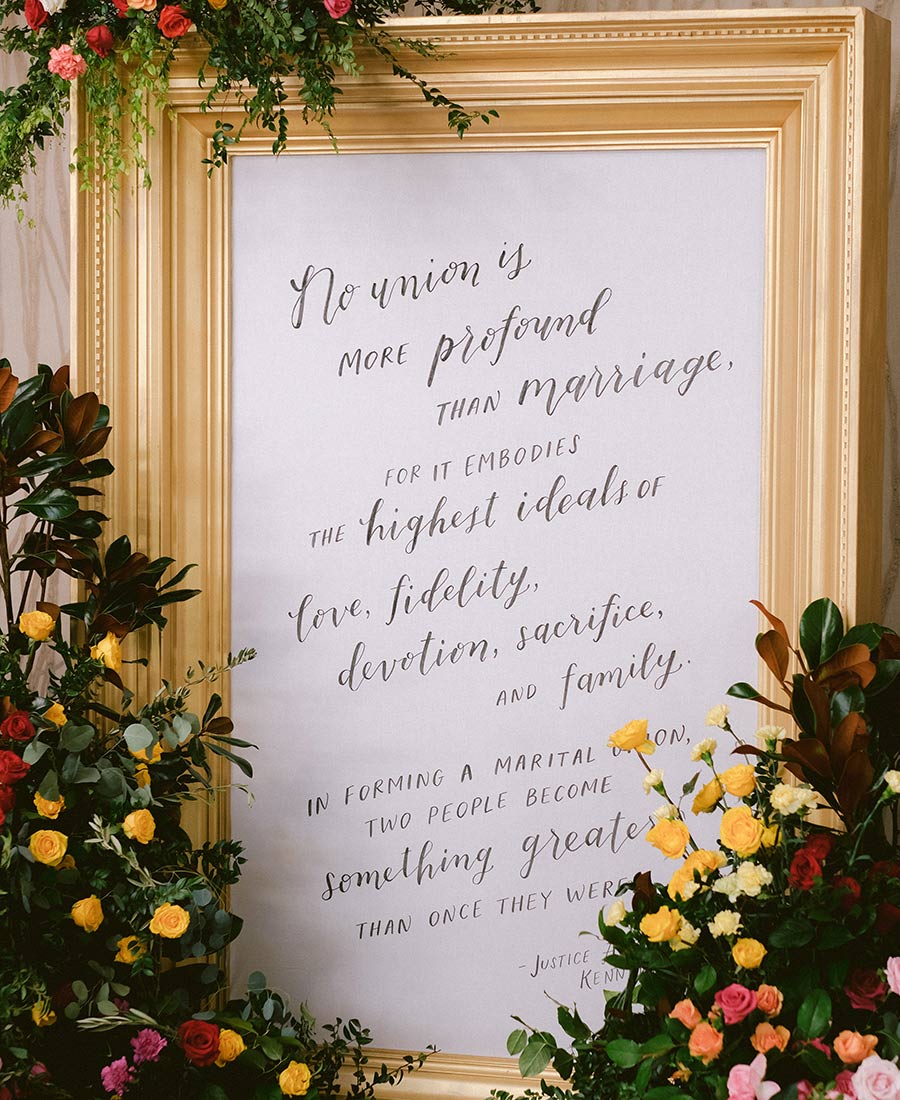 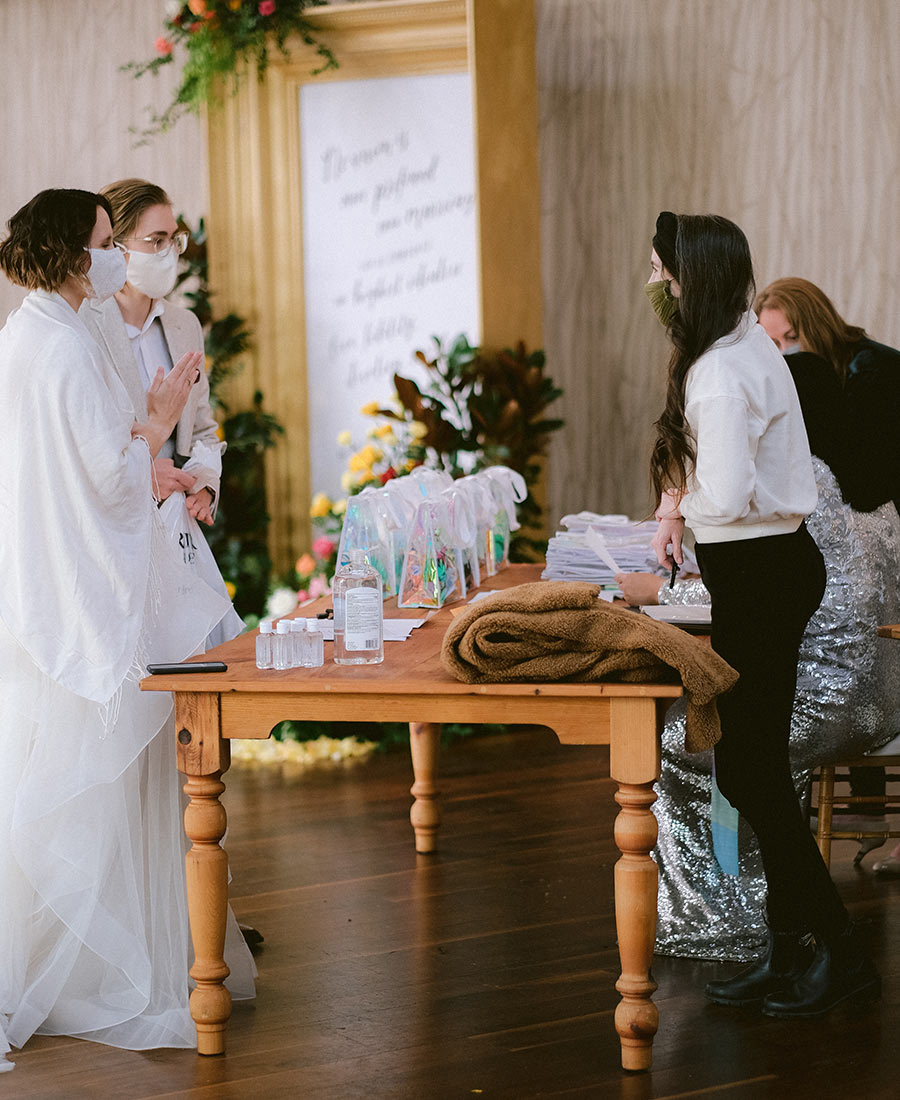 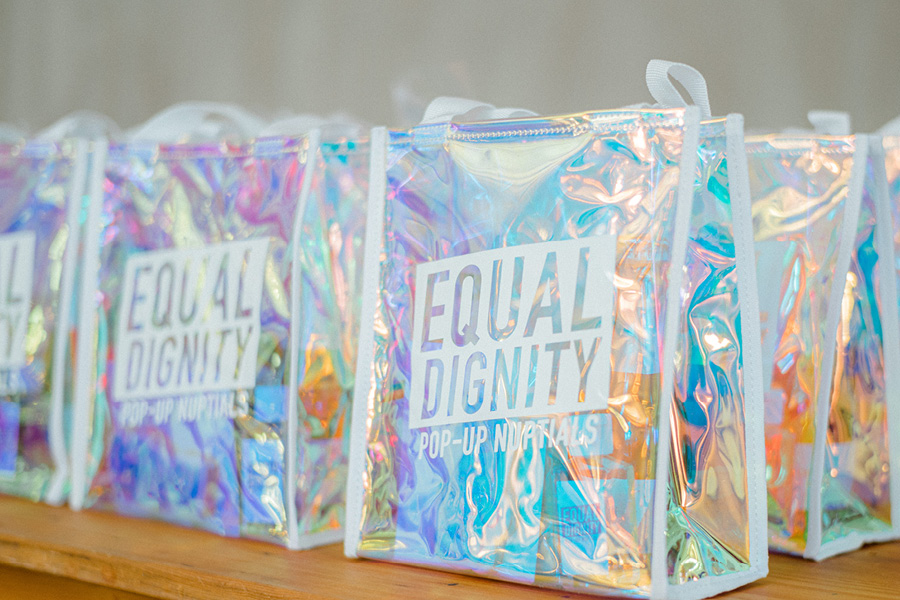 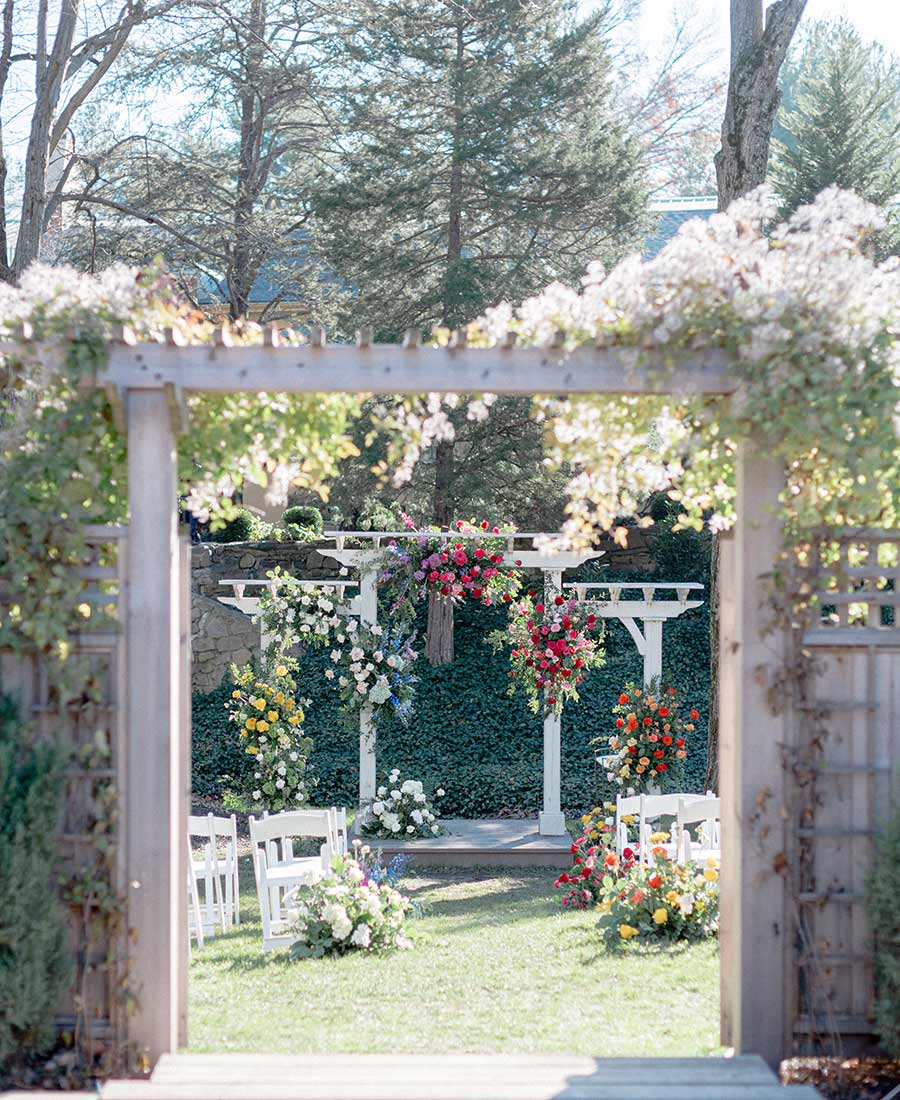 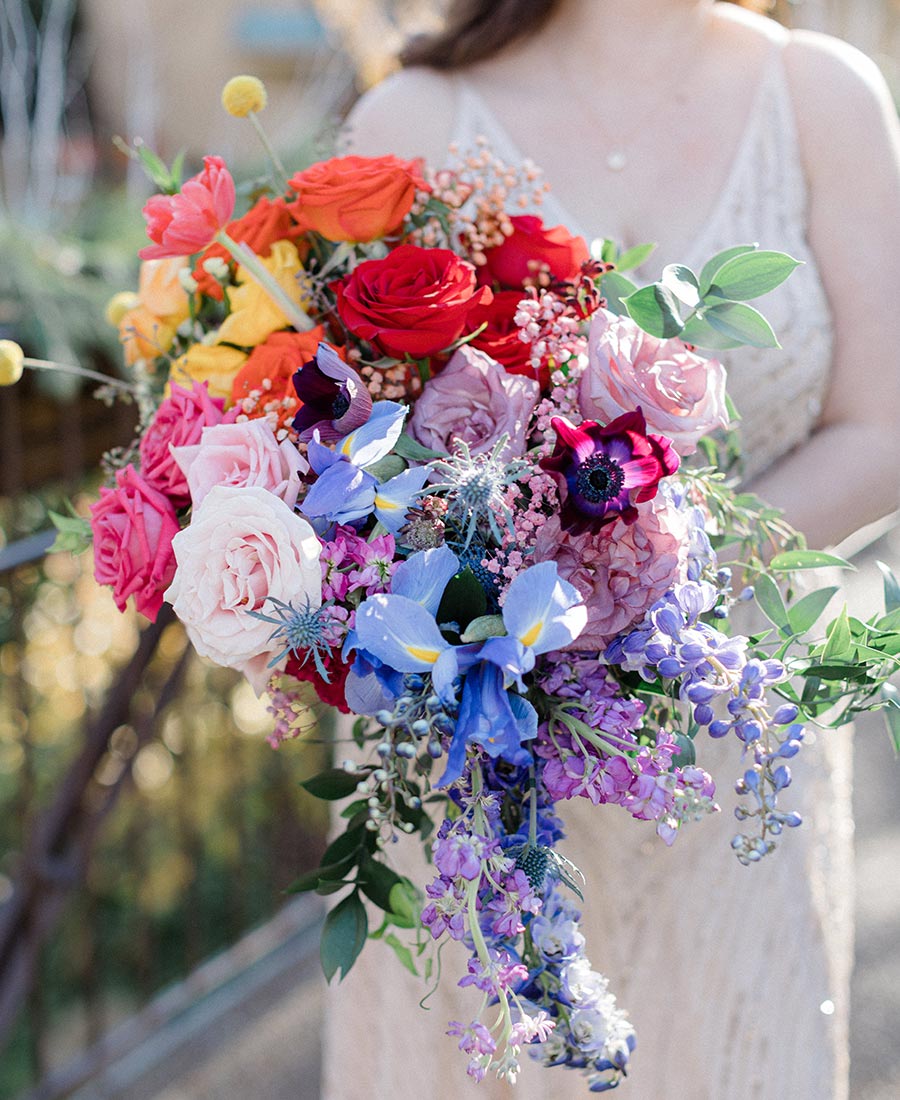 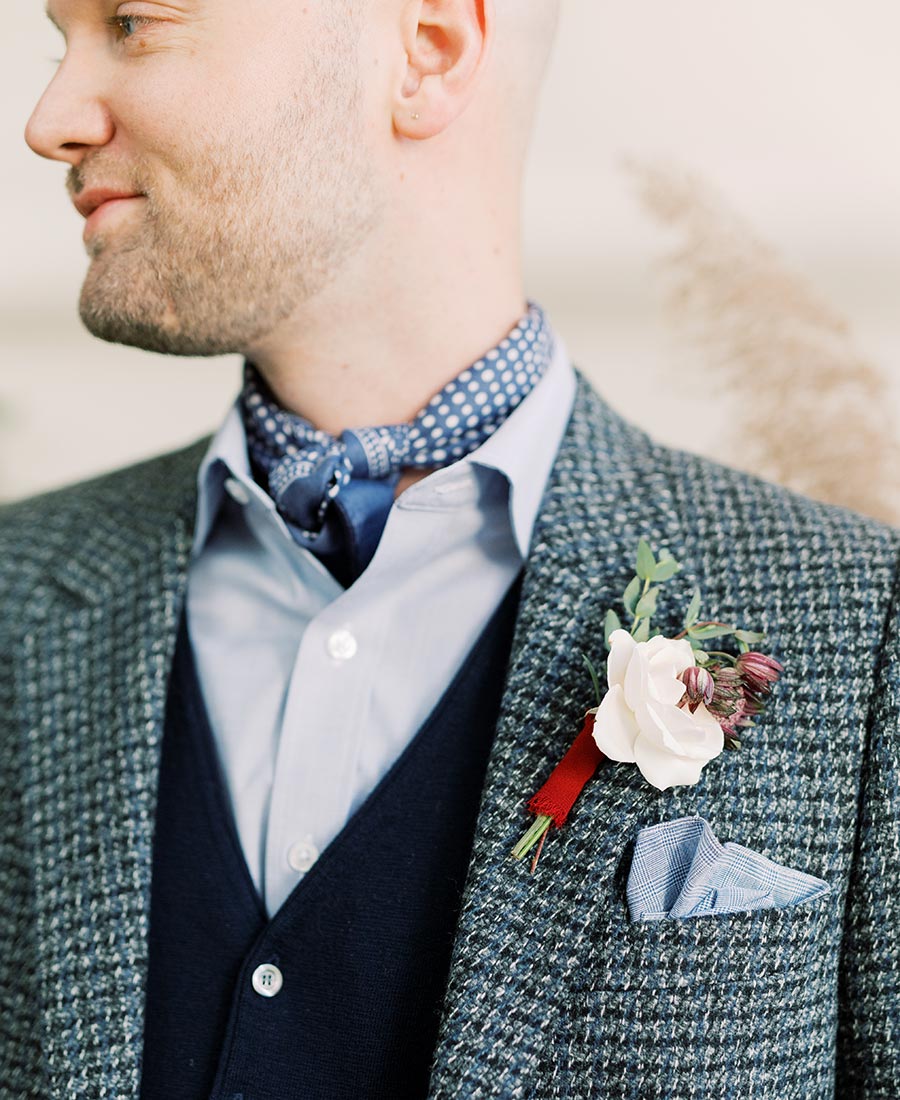 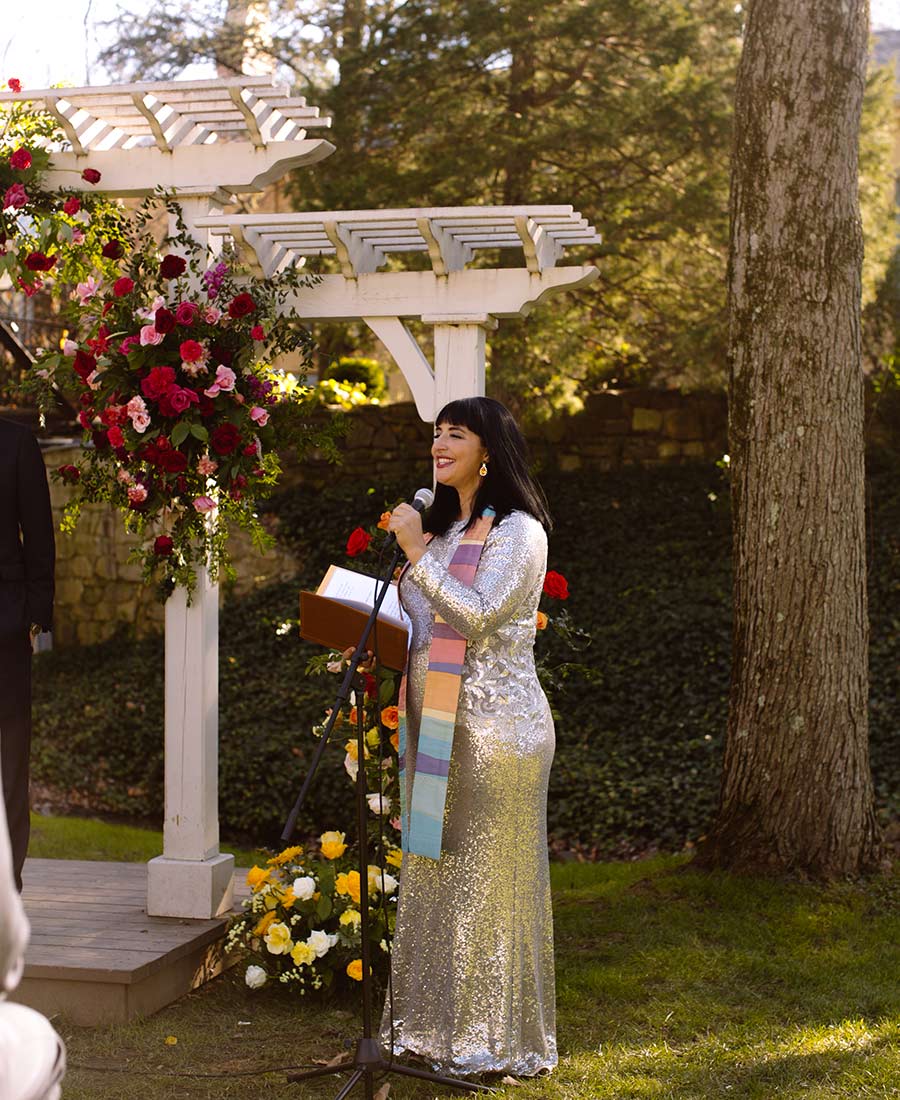 “Same-sex couples who postponed their weddings don’t have the same luxury as opposite-sex couples to think that they can simply select a new date sometime in the future,” says life-cycle celebrant Alisa Tongg, who held two previous pop-ups in 2013 and 2014. “The Supreme Court is currently deliberating on a case whose outcome could chip away the rights of LGBTQ people to marry who they love. So being able to provide same-sex couples that extra layer of certainty feels good.”

Of the six duos, three were LGBTQIA+. Three had children. And four of them found their wedding plans impacted by the pandemic — one couple whose ceremony was canceled due to COVID-19, and three pairs who didn’t know how to start planning because of the outbreak and didn’t want to wait any longer to be married. The event itself also was impacted. It was initially planned for the Pennsylvania Academy of the Fine Arts but was moved due to the new health and safety restrictions put into place on November 20th by the city. 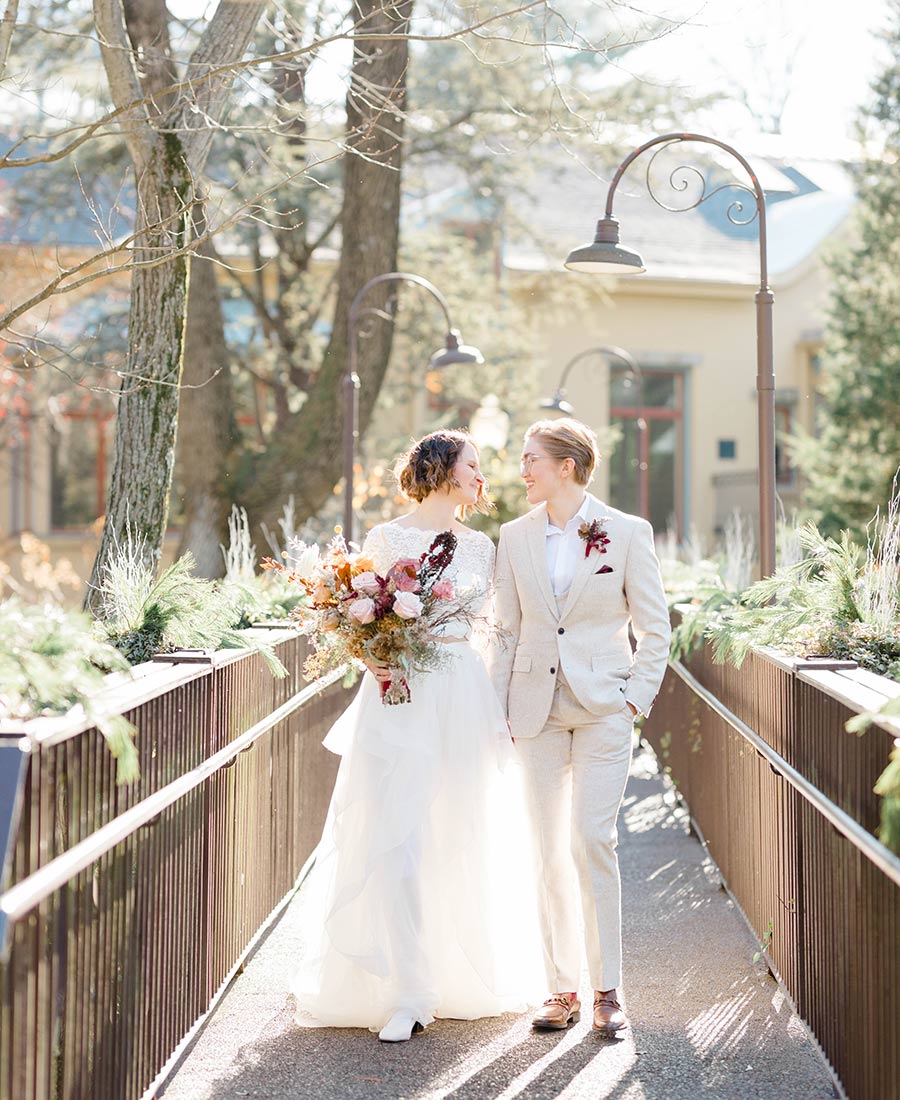 Carolyn Stevens and Alexa Woodward on the Pomme walkway. Photo by Jess Palatucci

If it sounds like a big undertaking, it was. But Tongg had plenty of help: Caitlin Maloney Kuchemba of Clover Event Co. and Becky DePasquale of RAM Floral took the lead in planning and florals, respectively.

Kuchemba scheduled by dividing the day into four phases (registration, couple portraits, ceremony, and family portraits), each lasting around 30 minutes per couple. (Duos were on-site for about two hours, with ceremonies occurring every 45 minutes.) The majority of the activities were staged in the gardens. 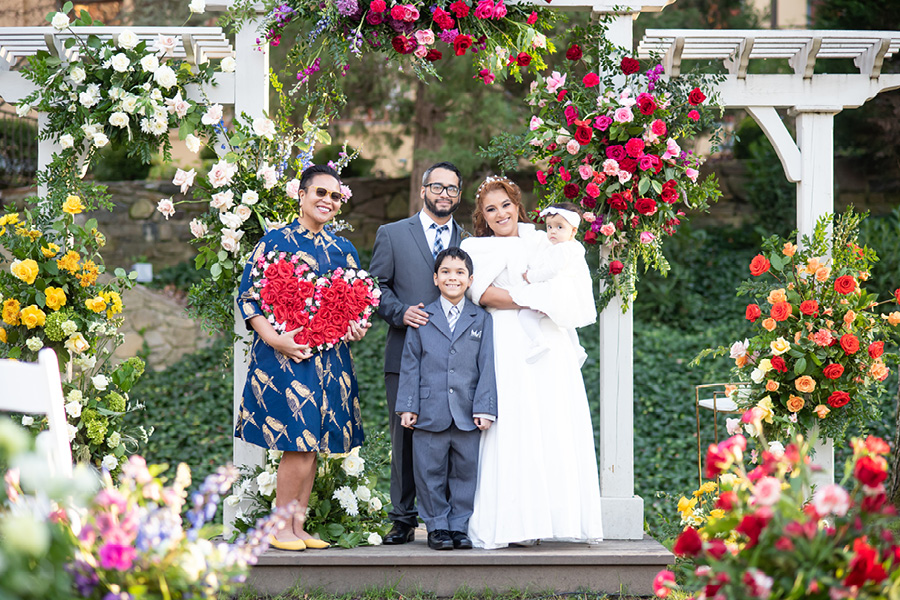 “For social distance and flow, I knew it would benefit us to have at least two vignettes for portraits,” says DePasquale, who coordinated with seven florists and teams to create the various spaces, using mostly sponsored florals. (DVFlora donated thousands of stems.) “I wanted everyone to feel excited about creating; I didn’t set any expectations in terms of exact designs.” There was a rainbow-hued ceremony site, and a beautiful frame from Oleander Curated and art from Hello, Bird offered a welcome moment.

The floral vignettes, which included the Secret Garden, were located inside, but participation was limited to the couple and their photographer — each pair had its own — for their time slot. In pre-registration, the newlyweds-to-be identified what personal floral styles they wanted (bouquet or boutonniere), notes DePasquale. They chose from a variety of options for each on the Big Day. 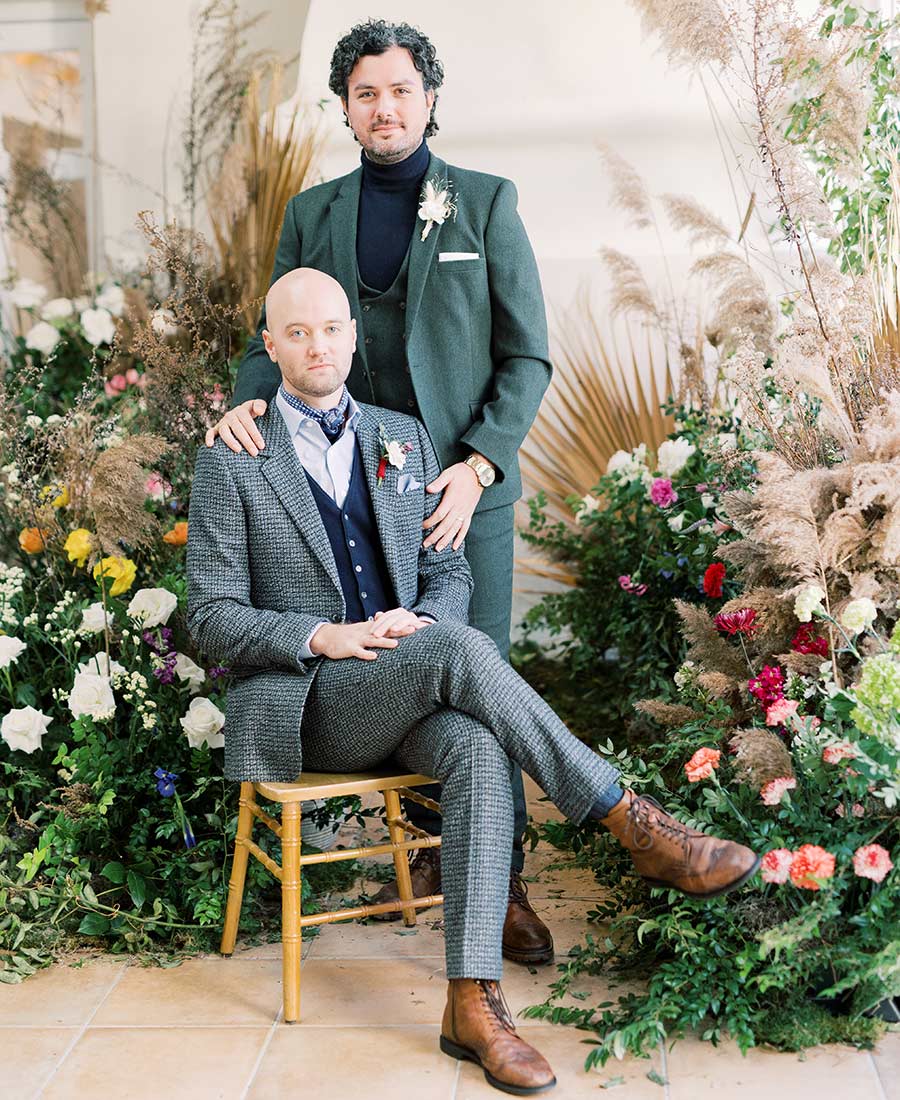 There were three officiants — humanist celebrant Cynthia Manchester, Cynthia Cherish Malaran and Tongg. Tongg created a civil ceremony script for all to use that lasted about 10 minutes, with the option for pairs to say their own vows. The officiants could also put their own spin on things. All of the ceremonies included the Declaration of Support, in which the duo holds hands and faces the audience (no more than 10 witnesses), which promises to love, support and accept the couple as a family.

Among the duos were Mitchell Bloom and Stephen Tornetta. The Newbold pair had planned a 160-guest wedding at Fleisher Art Memorial for May 16th but had to postpone. They still wanted to get married this year but weren’t sure how to make it happen. Then a family member texted them about the event, and they decided to go for it. “This presented the perfect opportunity,” says Stephen. “If 2020 has taught us anything, it’s that you have to be okay with flying by the seat of your pants.” 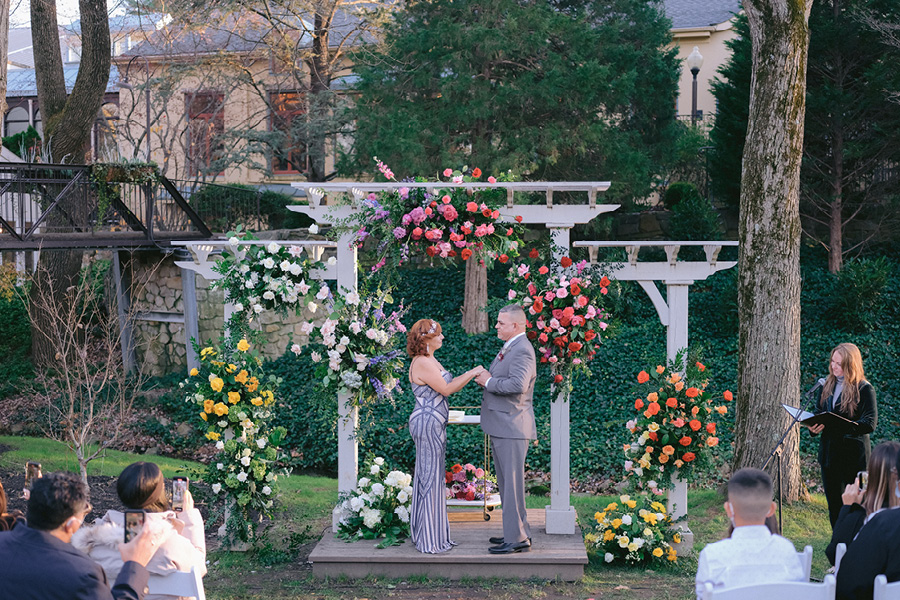 Nine witnesses attended. The couple obtained a self-uniting license, and their sisters signed as the witnesses. “This was a special moment, since they were going to be in our wedding party,” says Stephen.

Adds Mitchell: “I haven’t seen my family very much since March, so seeing them was very emotional. We also didn’t know that there would be live musicians playing. Walking down the aisle hand-in-hand to Somewhere Over the Rainbow being played on the strings, with the family and the gorgeous weather — it was perfect.” 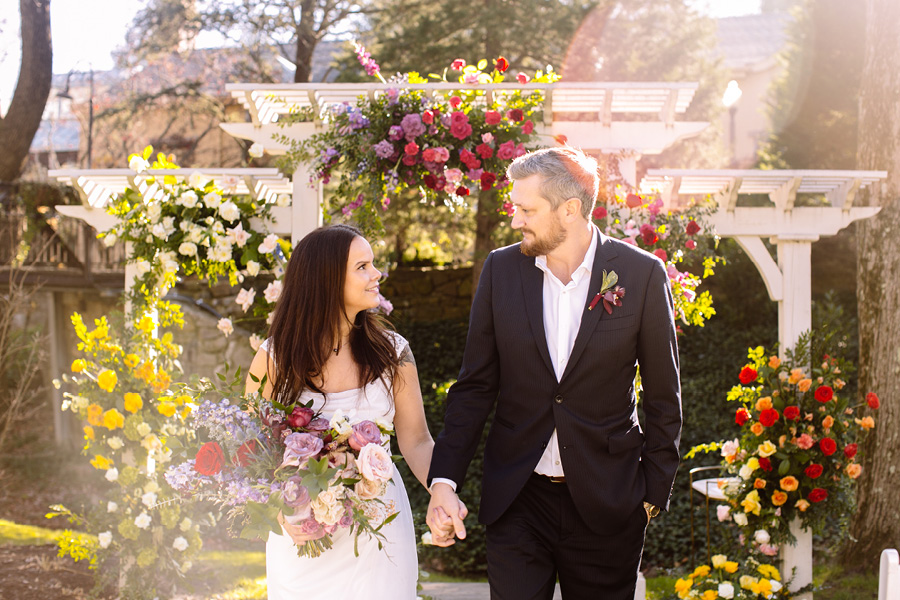 That music by Elegance Quartet was one of the memorable elements the vendors put into place. “When couples signed up, they truly didn’t know what they were walking into,” says Kuchemba. “They put all of their trust in us to plan their wedding day, so we knew we had to have some surprises.” 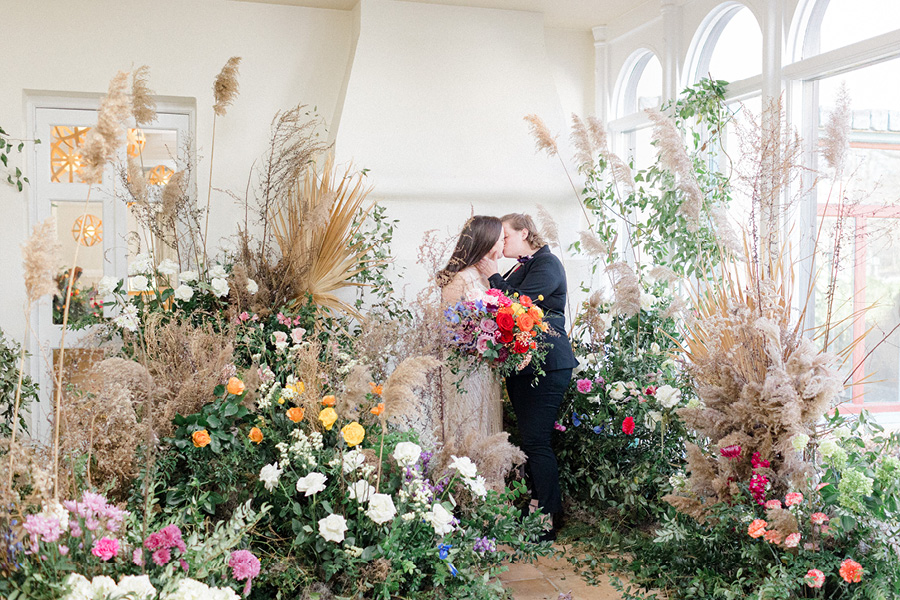 Another perk for Mitchell and Stephen: Their family surprised them with a mini socially distant wedding tailgate, complete with a champagne toast and a small wedding cake. “Far from the reception we had planned,” says Stephen, “but a touching and thoughtful end to the day.”