The Bold Barbuzzo Upstairs Wedding of a Top Philadelphia Jeweler

Her L. Priori rings were custom designed, of course. 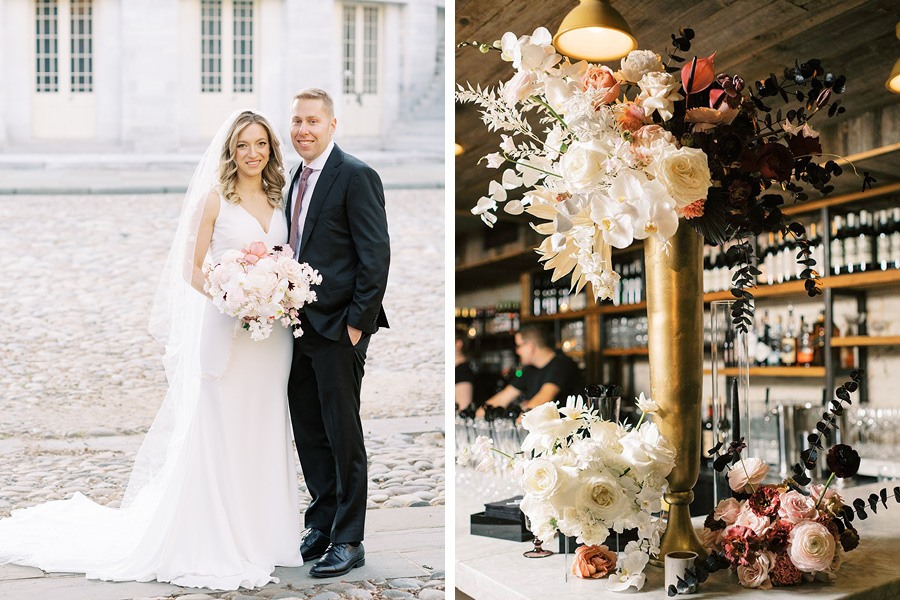 Weddings always offer much to treasure, particularly when they bring together one of Philadelphia’s finest jewelers (that’s the woman behind L. Priori) and her beau. Even better when they dazzle with dramatic florals, an intimate guest list and a setting that serves up a tribute to the couple’s history. Here, a peek at the Barbuzzo Upstairs celebration, photographed by Rachel Pearlman, that sparkled from the first step down the aisle to the last toast.

[Ed. Note: The coronavirus outbreak has impacted the wedding industry greatly, and we are committed to continually sharing pertinent news and information for and about couples who are navigating the impacts on their weddings and related events. We must also, however, serve as a resource for those preparing for weddings in the future, and honor weddings that have recently taken place. We are here to support past, present and future Philadelphia weddings.] 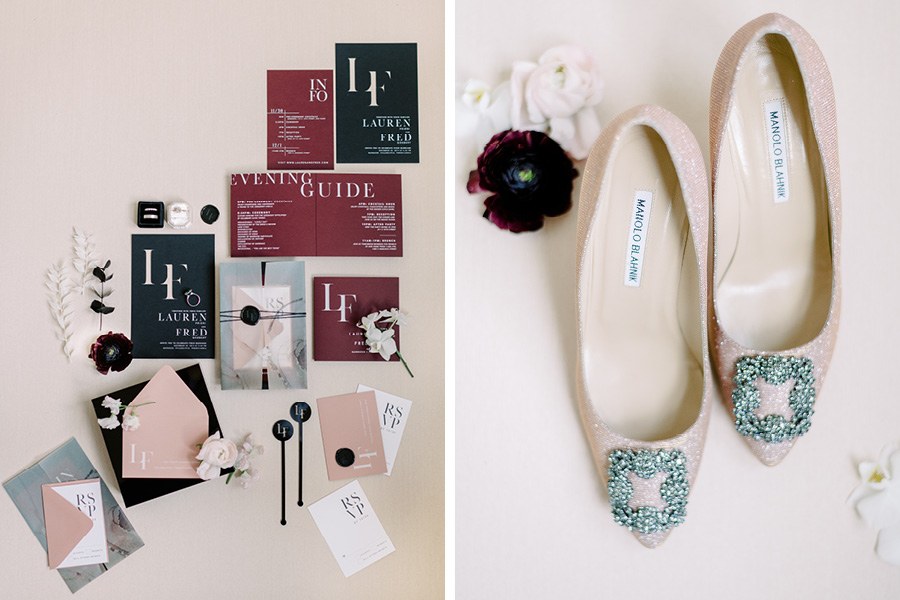 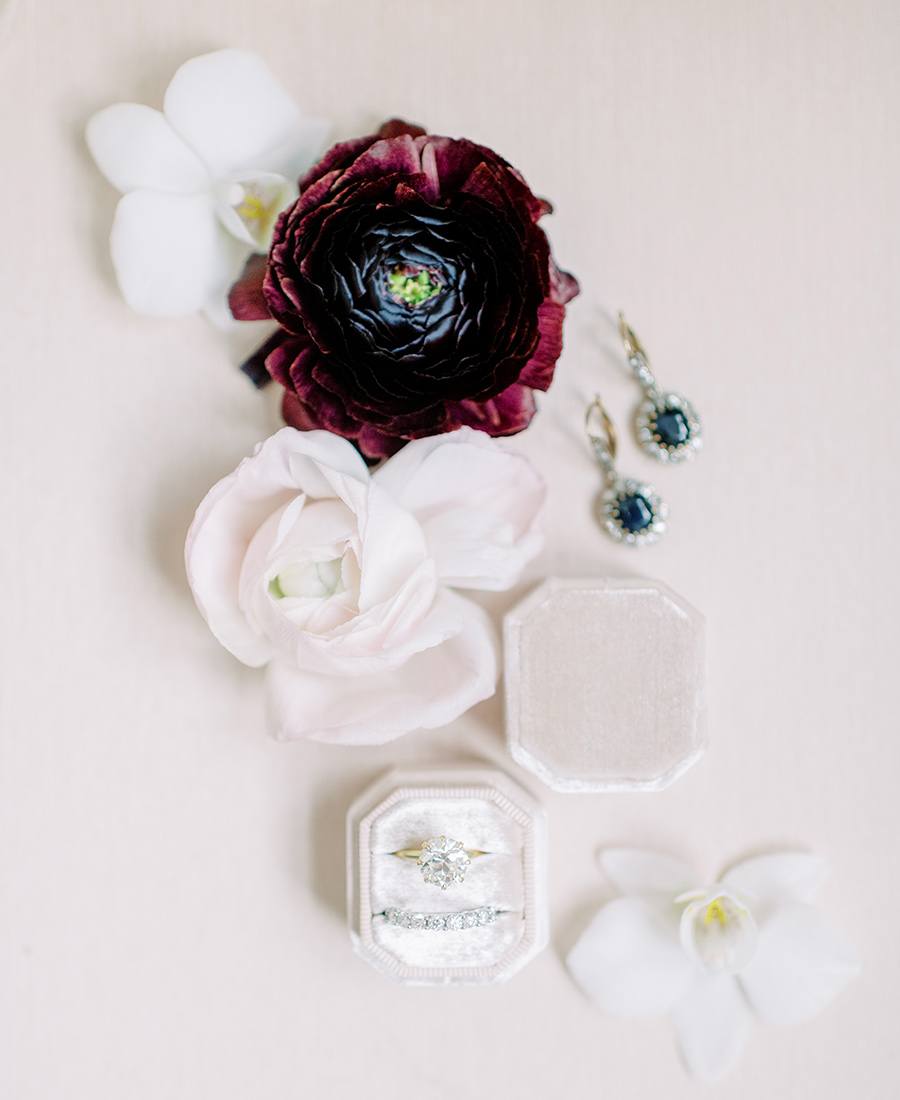 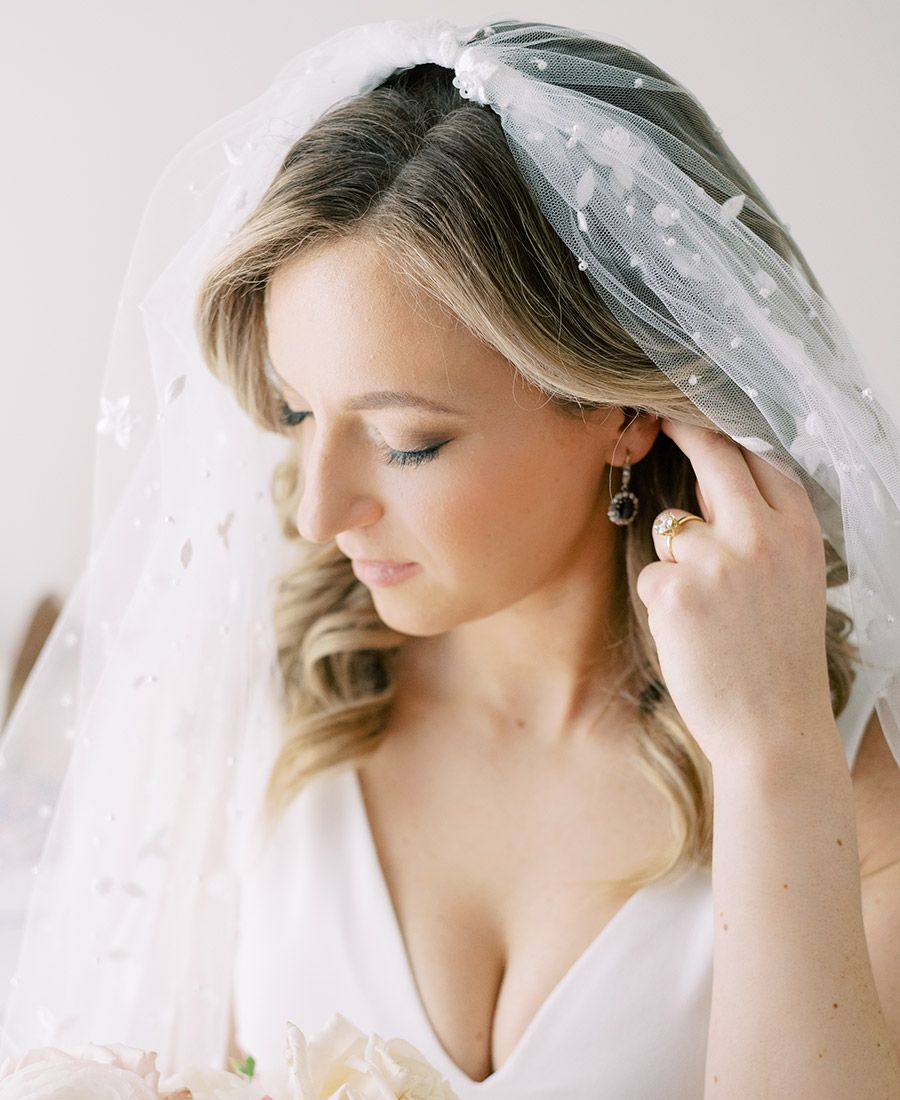 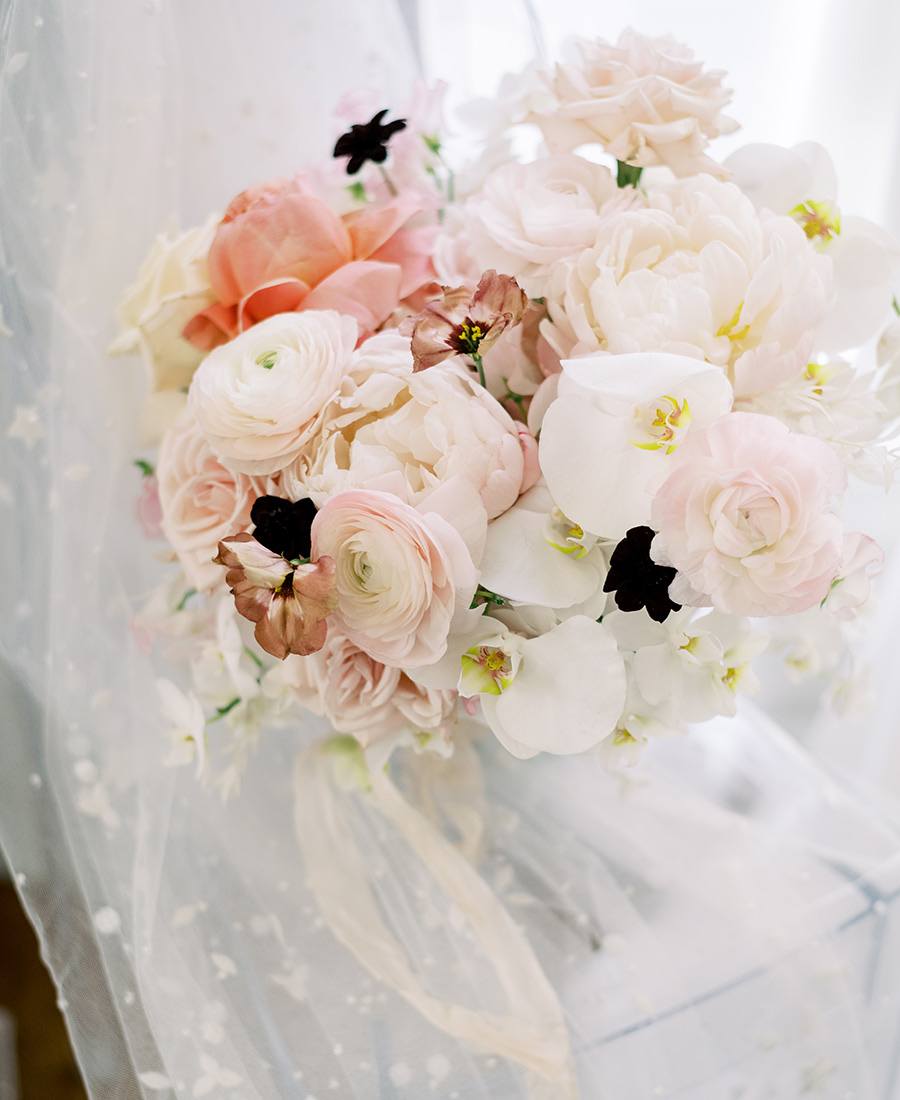 It’s an idiom you’ve likely heard before: It’s a marathon, not a sprint. In the case of Lauren Priori, owner of her namesake custom jewelry salon, and Fred Goebert, a real estate investor, it’s a triathlon. The couple, who live in South Philly, met through a triathlon training group, found they had much in common and eventually went out on a not-so-great first date. “I hated seeing him around [after that],” says Lauren. She thought he was quiet and serious, and he thought the same of her: “uninterested because I’m not a big talker,” she adds. But, on the advice of a smart pal, they stayed friends and, on a triathlon trip to New Hampshire, Lauren realized she had a bit of a crush. Fred must’ve felt the same, because they began dating over Pope Weekend. It was a very Philly first date — Bud & Marilyn’s for a drink and dinner followed by budino at Barbuzzo for dessert. 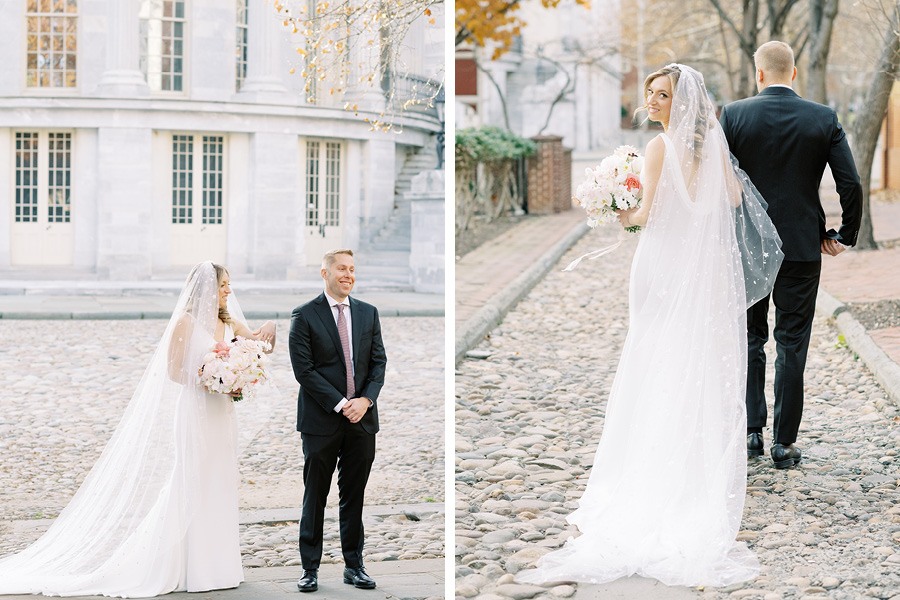 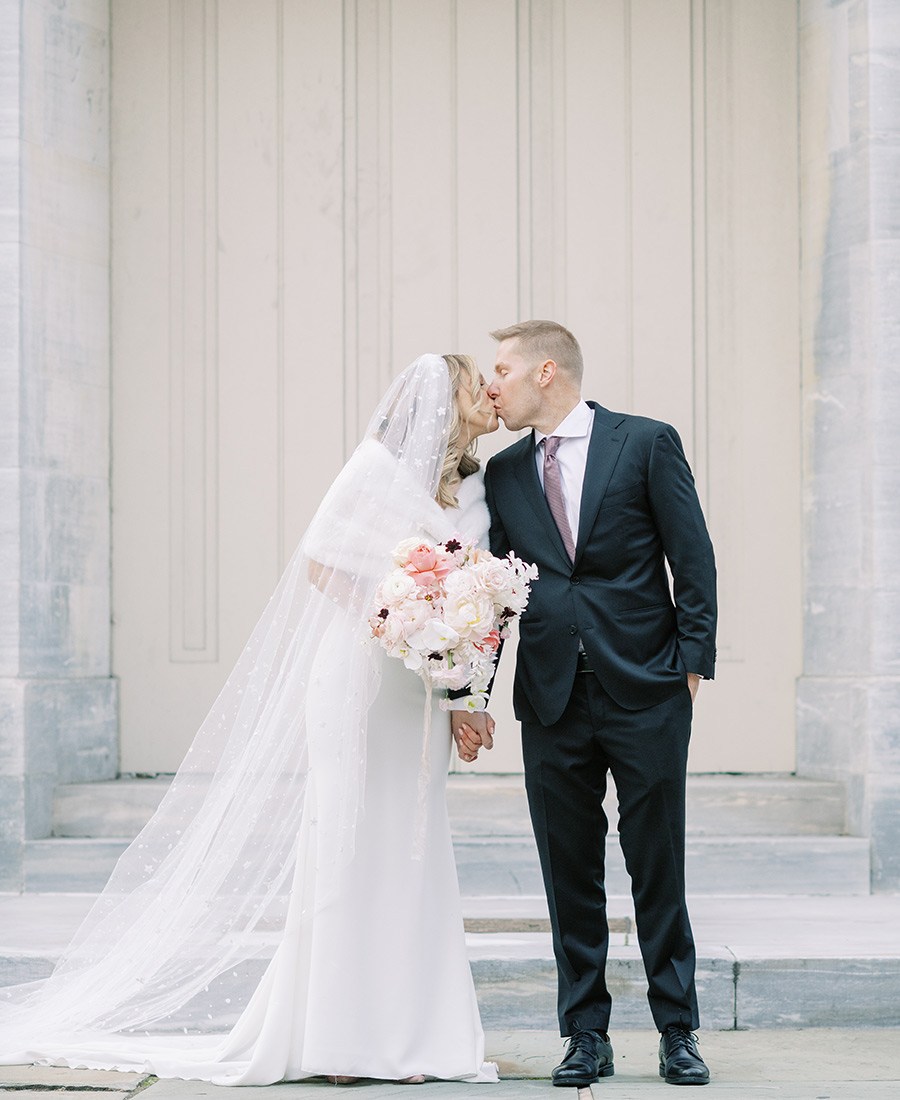 Three years later, Fred proposed over dinner at Hawthornes (the fated location of that first official date) with a fake ring he bought online: He had the good sense to let the jewelry designer create her own. She did so with gusto. “I probably brought in 15 diamonds to consider, but I finally had to ask my old coworker (from my old jewelry store job) to help me,” says Lauren. Her colleague guided her to a main center stone. But the stylish search didn’t end there; by the time the wedding took place 14 months later, she was on her third setting and knew she was going to keep redesigning it. “I wanted something simple in yellow gold that I couldn’t get sick of and an antique stone for [the] center.” Her band: classic diamonds, but she now has about seven such rings that she mixes in and out. 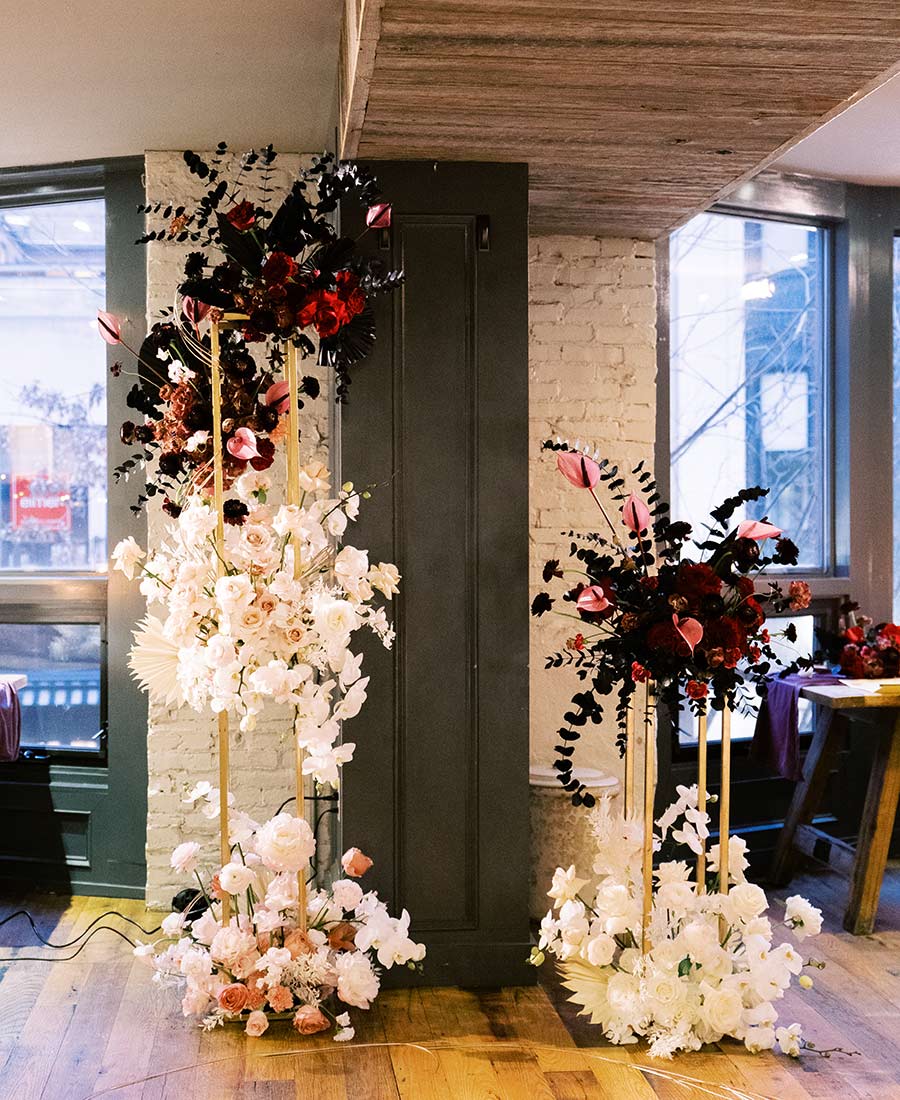 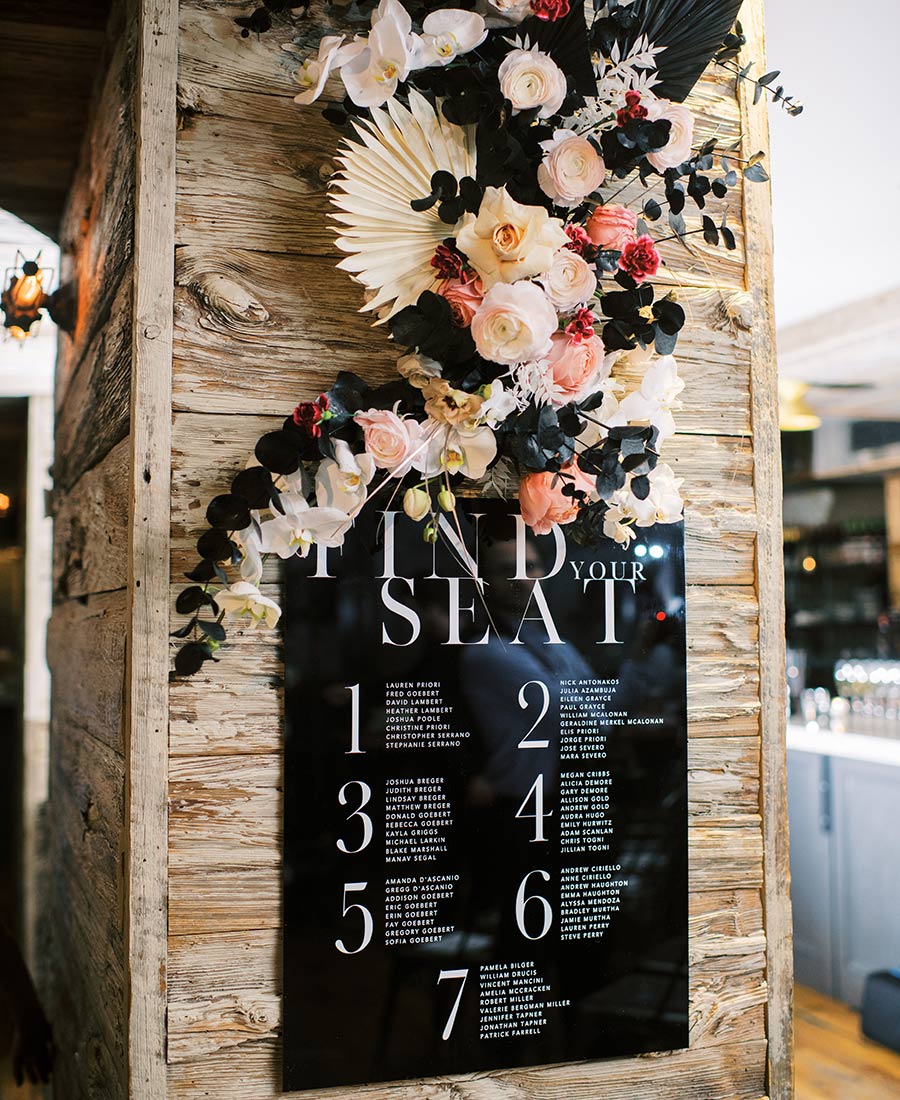 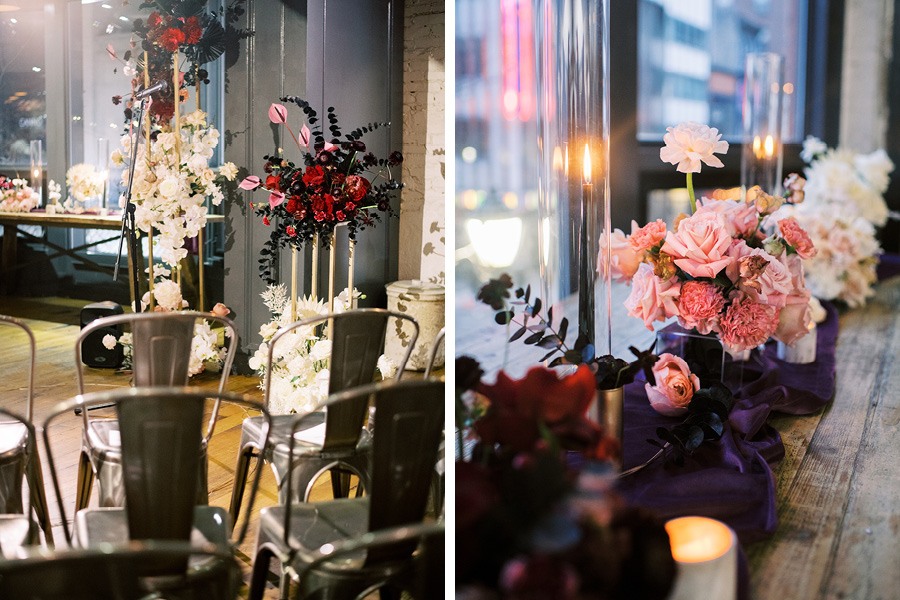 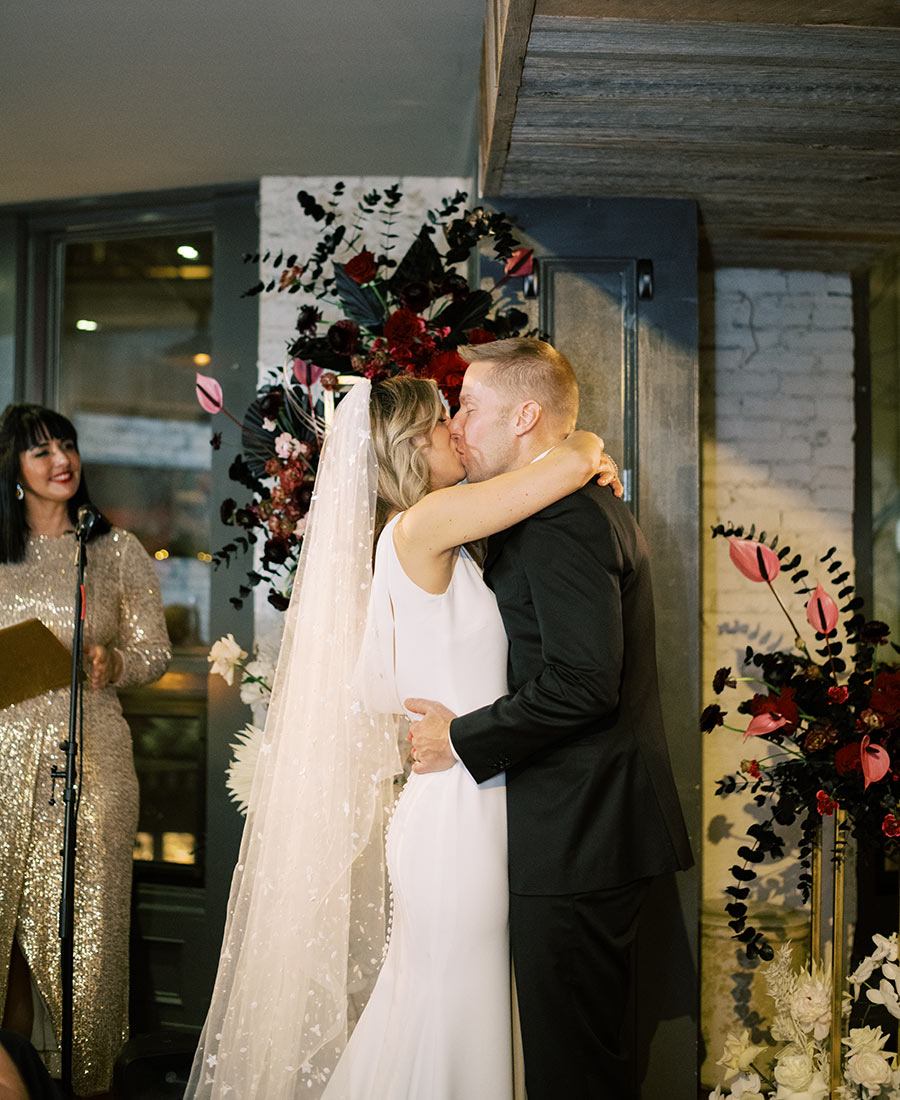 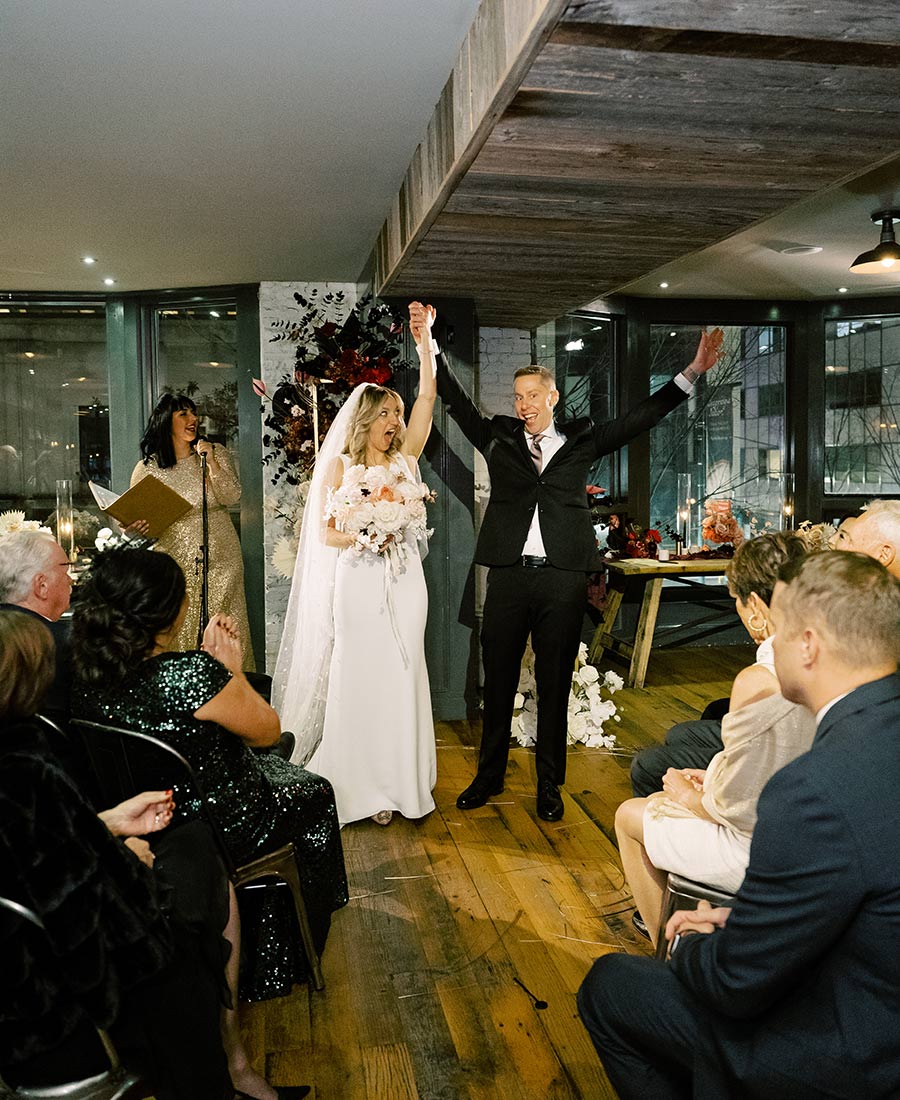 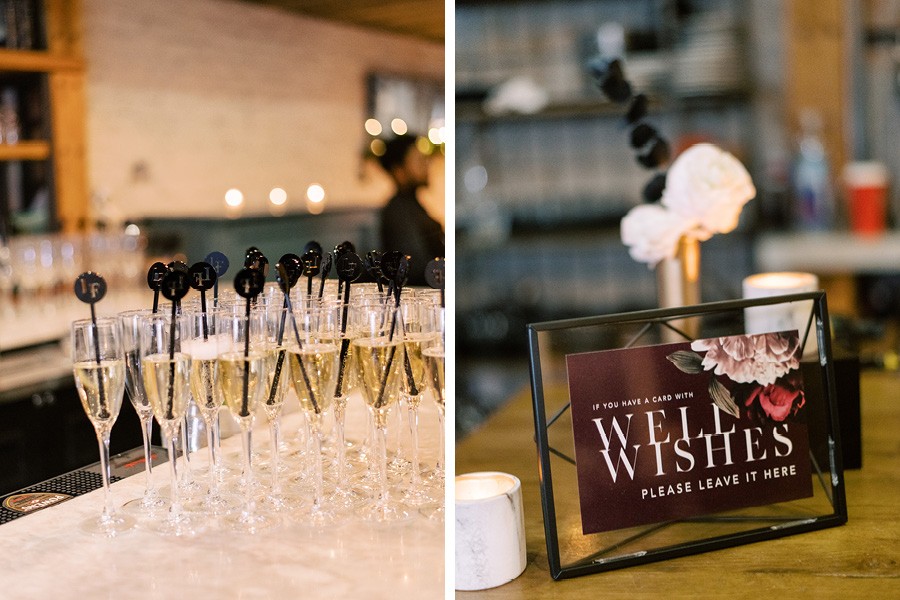 The wedding was much more set in, well, stone. The duo chose Barbuzzo Upstairs for their union on November 30th, 2019. While Lauren initially wanted a simple palette of greenery and white, Clover Event Co. suggested a bolder approach to fit her personal style (she’s a gem artist, after all). Gone were the traditionally rustic elements of the space; in their wake were modern, edgy but sophisticated decor touches. An Evening Guide, created by Chick Invitations, showed the 64 guests the flow of the night; a dramatic black acrylic seating chart directed them to their seats for the main event and reception. Pre-ceremony, attendees sipped Champagne accented with monogrammed stirrers. They also placed fronds in a circle to build a ring for Lauren and Fred to say “I do,” which the pair did in front of a statement-making asymmetrical structure by RAM Floral in white, oxblood, eggplant and blush blooms. And celebrant Alisa Tongg officiated the sweet and touching ceremony. 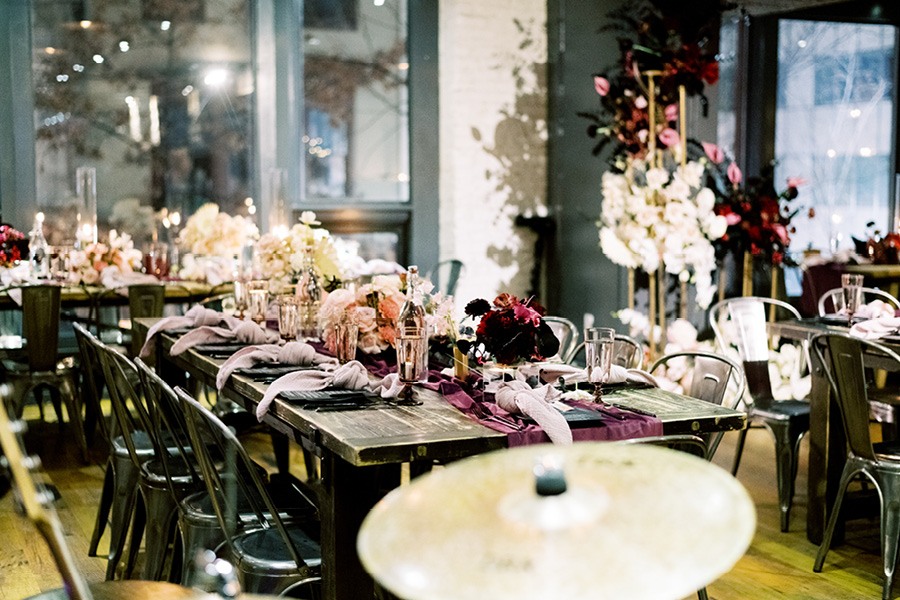 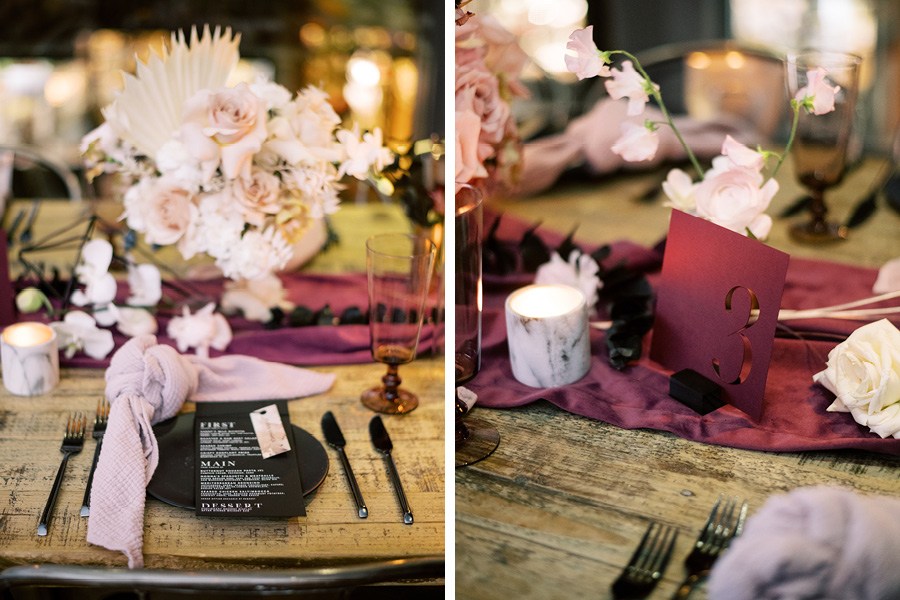 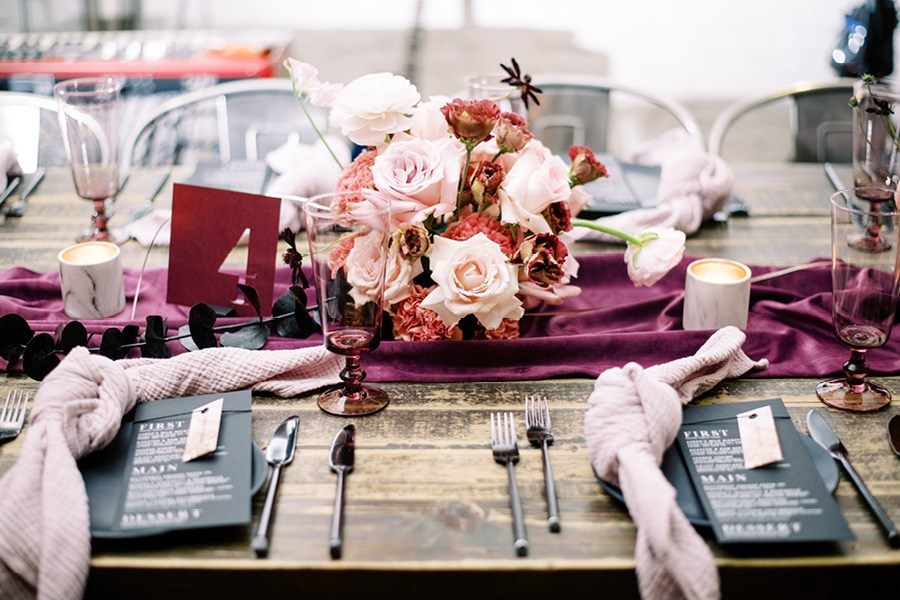 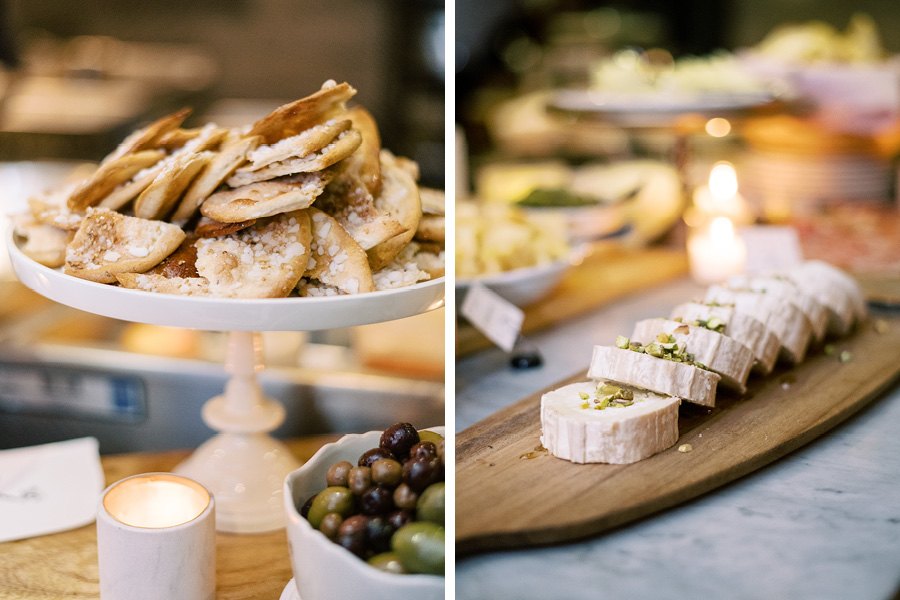 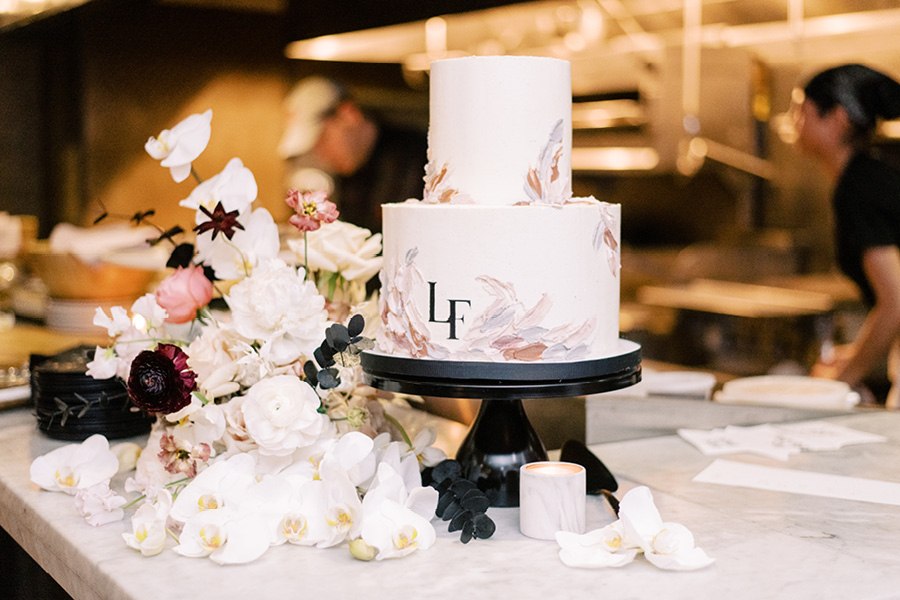 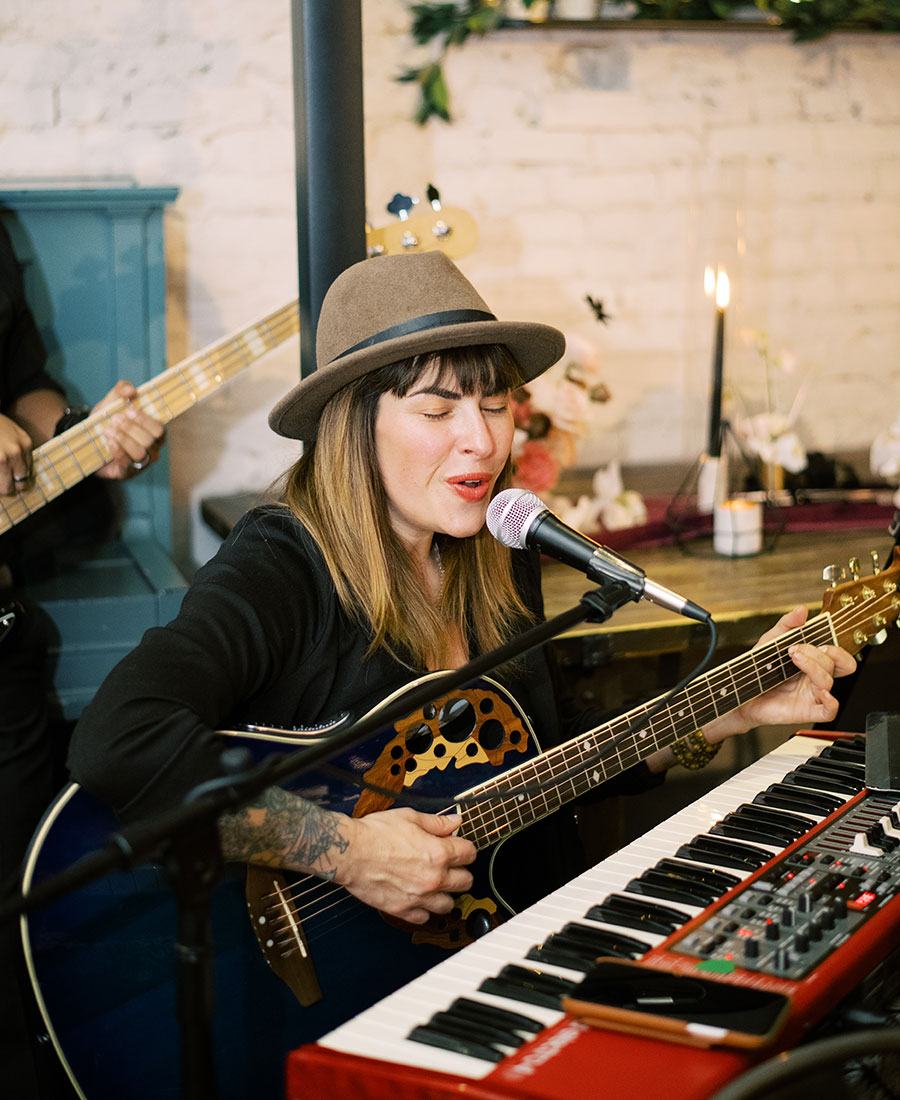 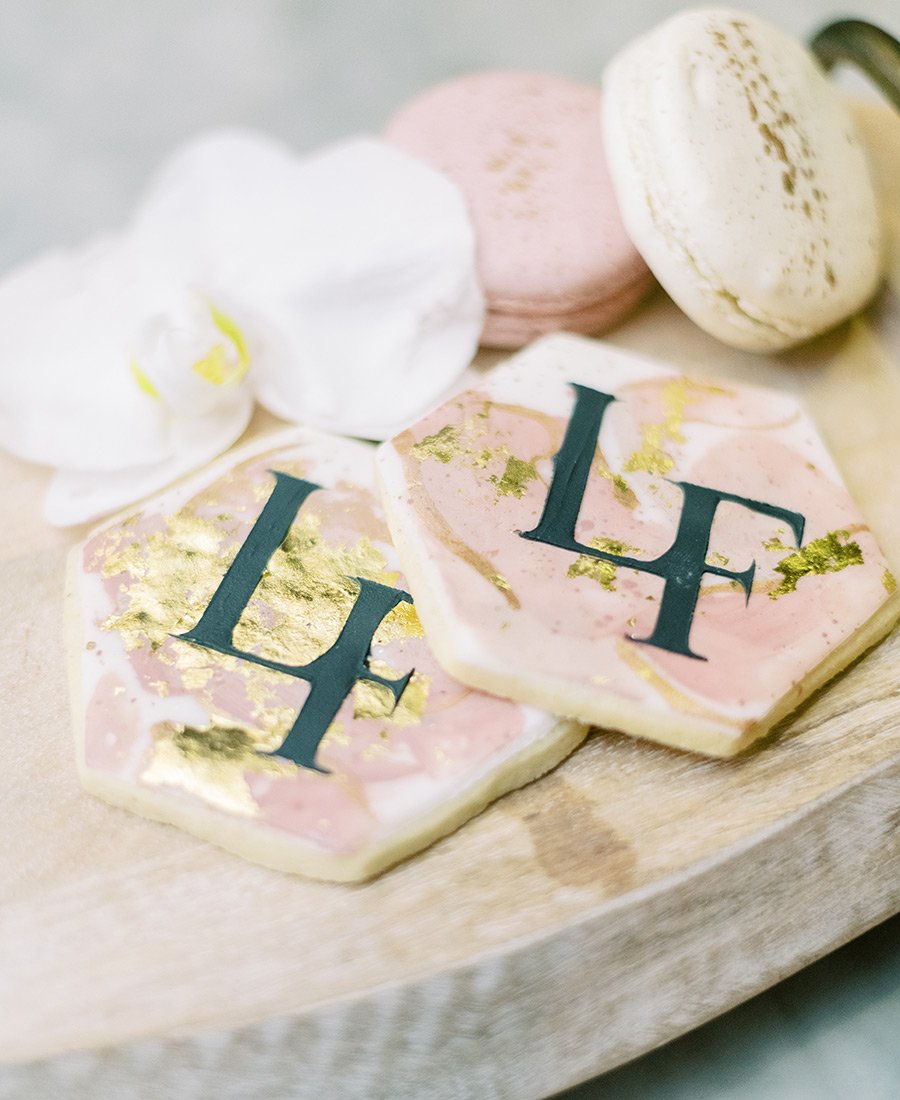 Equally meaningful? The toasts. “Our families are not outwardly sentimental, especially the people who gave toasts, so it was really nice to hear them give… speeches from the heart,” says Lauren. Meanwhile, dinner was served on black matte plates with flatware in the same color scheme, with oxblood goblets, orchid terra napkins and eggplant velvet runners. There were signature cocktails (red sangria and a blood orange margarita); family-style first courses like sheep’s milk ricotta, roasted and raw beet salad, and eggplant fries; and plated entrees including butternut squash pasta and seared chicken saltimbocca. The cake (chocolate with cookies and cream buttercream), macarons and monogrammed cookie favors were delightful treats by Nutmeg Cake Design — as was the late-night whiskey bar pouring out Fred’s favorite sips and the afterparty at Spin (a highlight for the groom). 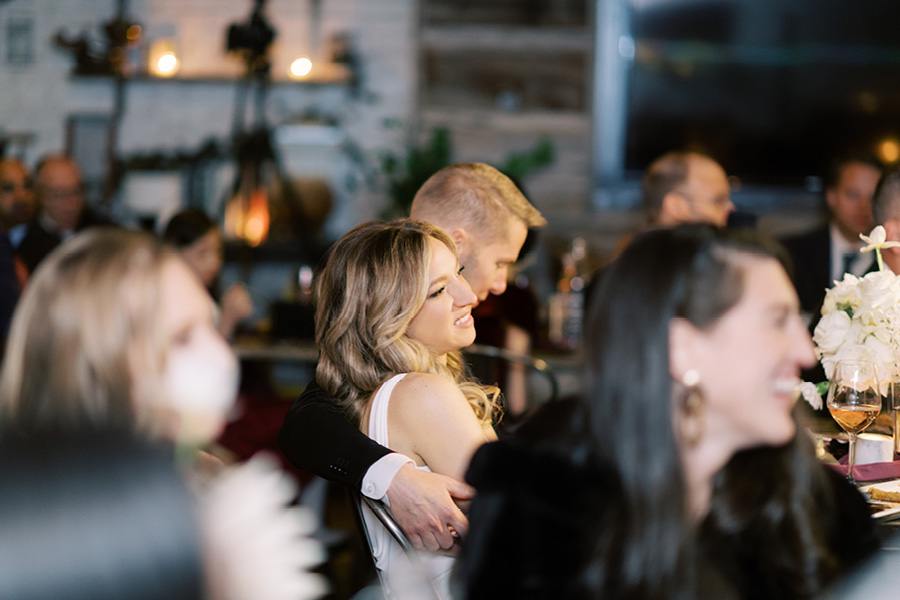 The couple later toasted their love with a New Year’s Eve mini-moon in New Orleans. And, while they’ve postponed their honeymoon in Japan due to COVID-19, their journey together glimmers in their future.