Plus, is that 64 degrees I see in the forecast?!

If you were scratching your head yesterday trying to find the Mummers Parade on Channel 17, it wasn’t there.

The Mummers turned up on MeTV 2, that nostalgic little TV station where you can see old shows like Leave It to Beaver, Gomer Pyle, and Alfred Hitchcock Presents ’round the clock.

And behind the Mummers broadcast booth? Some faces we haven’t seen on TV in a long, long time: husband-and-wife broadcast duo Larry Mendte and Dawn Stensland: 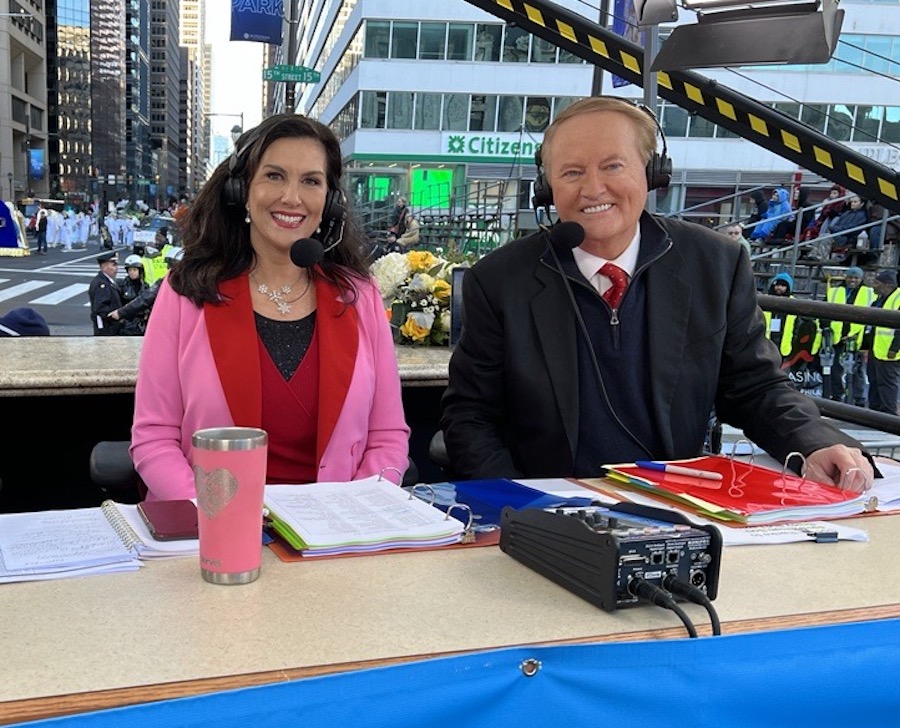 The pair did a fine job narrating the Mummers Parade, which seemed to go off without any major controversies, owing in no small part to the fact that the parade organizers and the city have been working hard with the clubs to steer them away from any problematic content.

But don’t worry. That doesn’t mean city officials were immune from critique during the parade:

Shame 3/4 of the Mummers voted for them twice because they’re brainwashed union Dems. So spare me your outrage. pic.twitter.com/MvJZUApDxf

New Year’s Eve was a disastrous night for residents on the 3500 block of Miller Street in the Port Richmond section of Philadelphia. Around 2:50 a.m. on January 1st, the fire department responded to what was reportedly a gas explosion on that block. The explosion destroyed two homes and damaged others and sent several people to the hospital.

Want to rent out your house using Airbnb, VRBO, or similar services? Thanks to a new Philadelphia law that just went into effect, you can’t just do it. You now need a “limited lodging operator license.” Read all about it here.

Some other notable Airbnb regulations in Philadelphia:

The home can’t be occupied by more than three people (including the owner and renters) who aren’t related by blood, marriage, life partnership, adoption, or foster-child status.

Renters are only allowed to have guests between the hours of 8 a.m. and midnight.

You can now sleep in a giant shoe in York, Pennsylvania.

Is That 64 Degrees I See In the Forecast?

And from the Happy-New-Year-to-Youse Sports Desk …

What’s been up with the Sixers since we left them sitting atop an 8-0 winning streak? Ahem. Not much good. After beating the Knicks a week ago yesterday, they lost to the lowly Wizards on Tuesday, 116-111, and lost again to the Pelicans on Friday, 127-116. On the plus side on Friday?

Tyrese is back 🥹🥹🥹 @sixers @TyreseMaxey

CJ McCollum splashes his 10th 3-pointer of the game, that ties a franchise record.

No American should be expected to do their job the week between Christmas and New Year’s and the Sixers respect that.

Against Oklahoma City on Saturday, the Sixers came out on fire.

James Harden and P.J. Tucker were sitting this one out with injuries, and Tyrese Maxey was back on bench rest. But with the lead 54-27 halfway through the second, there was plenty of opportunity for other bench sitters to show their stuff.

The Thunder weren’t ready to roll over; they started the third hot and cut the lead to 20. The score stood at 89-72 Sixers at the end of third. More chances for the subs! But Joel stayed in long enough to do this for the first time this year:

Tonight, they play the Pelicans (and Zion Williamson, who’s having a breakout year) in NOLA.

And then there were the Eagles. The Saints came to the Linc on New Year’s Day, and all the buzz was over whether QB Jalen Hurts would be in shape to play after suffering a shoulder injury in a game against the Bears in mid-December. He wasn’t, and he didn’t, and things didn’t go well. DE Josh Sweat was carted off the field early with an injury. (He’s since been released from the hospital.) The Saints leaped out to a 7-0 lead, and the Eagles offense couldn’t get anything going. It was a beautiful day for a midwinter football game, though, with the temp on the field a balmy 55. That wasn’t helping the team, though.

Eagles offense starts the game with back-to-back three-and-outs. Was curious if Sirianni would keep offense on field for 4th-and-1, even though they were at the 19-yard line.

The Saints kicked a field goal. 10-0. In cheerier news:

Carson Wentz intercepted for the second time in the first half.

Crowd at FedEx Field are booing.

Hey, you’re not a true Philly fan if you don’t hate Simmons and Wentz.

James Bradberry got toasted on a long pass, but the big boys stopped the run and held the Saints to another field goal. 13-0. Offense?

4th straight three-and-out for the Eagles.

I went for a walk at halftime to keep from screaming. When I got back, they were three minutes into the third quarter, an Eagles TD had been called back for holding, and Jake Elliott had kicked a field goal. Everybody on the offensive line was getting slapped with penalties. Then this:

Special teams felt left out of the Eagles' badness, so Brett Kern hit a 26-yard shankopotamus.

Of course he did. I should have kept on walking.

And another Brandon Graham sack to open the fourth quarter! Then a 23-yard Boston Scott reception was negated by a penalty on Kelce. Again. The Birds lost 28 yards on the play. Good D led to another sack by the Birds – the seventh of the game! And on a third-and-18 try by the Saints … we were offsides. But! They called it on the Saints’ center instead, miraculously! That made it third-and-23 for the Saints, and we stopped them once more. The defense was on fire; the Eagles have 67 sacks so far this season, the most of any team since 1989.

And then – death. A Marshon Lattimore interception that he ran in untouched from the 10 to make the score 20-10 Saints. “Play of the day!” the announcer declared. You could see the air sinking out of the tires. We’re 13-and-3 on the year, and if we don’t win against the Giants next Sunday, we lose home field advantage for the playoffs — and the bye that might let some of our wounded warriors recuperate.

Guys gotta cone together. See what they wanna do. Or this shit will be over. — AJ Brown

In college hoops, Villanova lost to number two Connecticut on the 28th, then fell to Marquette in a heartbreaker on Saturday.

The Flyers? They also played.