The Birds' loss, ahem, hurts, but at least Embiid, Harden and the rest of the Sixers are looking good. 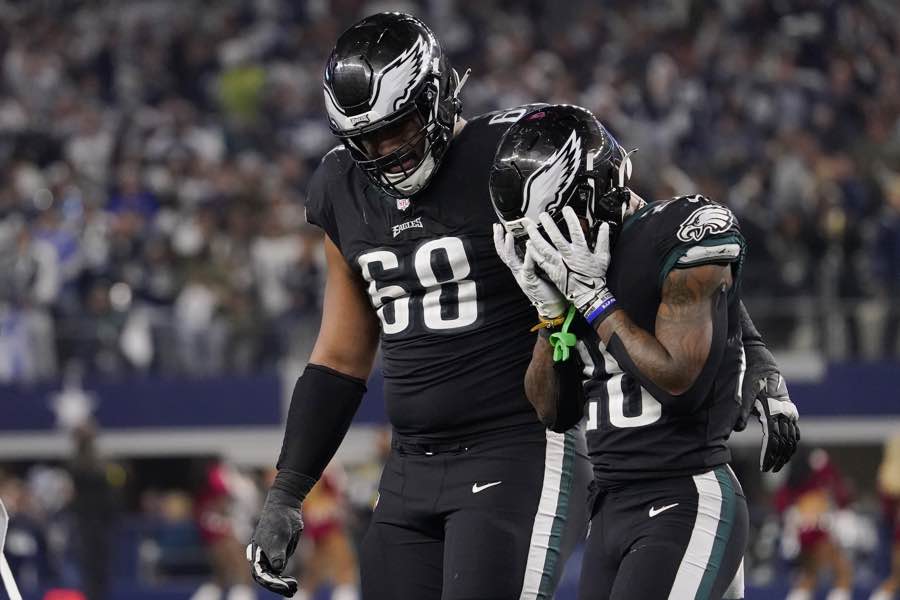 Eagles running back Miles Sanders is consoled by Jordan Mailata after a fourth-quarter fumble against the Dallas Cowboys on Christmas Eve. (Photo by Sam Hodde/Getty Images)

From the Oh Phooey Sports Desk …

Just a weekend wrap-up post, and then we’re off for a week of winter break. Have the happiest of New Years, youse guys. Stay safe, and here’s hoping for better resolutions in 2023. —Sandy

Good news first: The Sixers are coming off a perfect 7-0 home stand, having beaten the Lakers, the Hornets, the Kings, the Warriors, the Raptors, the Pistons and the Clippers—and having come from as many as 20 behind in that last one.

James Harden had 21 assists in Friday’s game. Here’s how he celebrated:

And as for his triple-doubles?

Oh, and then this happened!

On Christmas Day, the team headed north to play the Knicks. Whatcha wearing to the game, James?

And the winning ways continued, with Joel Embiid dropping 35, Harden adding 29 with 13 assists, and Georges Niang sinking some big threes in the fourth. Can’t wait to get Maxey back.

Bad news next: Do you know what Eagles fans had for dinner on Christmas Eve? TURNOVERS. THEY HAD TURNOVERS. AND IT SUCKED.

It’s not like nothing good or fun happened as the Eagles took on the Cowboys in Dallas.

Watch the game with us at https://t.co/lQz3Wwxr6j.pic.twitter.com/XlQrqjX6Oe

But in the end, all we can say is:

The only thing that can cheer me up right now #FlyEaglesFly pic.twitter.com/tGj4T1NKUC

On the plus side, we’ve got a whole mess of Pro Bowlers. Eight Eagles made the list announced last week — the most of any team in the league. Headed for the game in Vegas — if (and that’s a big if) they’re not prepping for the Super Bowl — will be, in alphabetical order, A.J. Brown, Landon Dickerson, Jalen Hurts, Lane Johnson, Jason Kelce, Haason Reddick, Miles Sanders and Darius Slay. Nine Birds were named as alternates: James Bradberry, Fletcher Cox, Brandon Graham, Javon Hargrave, Rich Lovato, Jordan Mailata, Isaac Seumalo, DeVonta Smith and Josh Sweat.